Inflation be damned, consumers are spending — and not just on necessities such as food, clothing, shelter and fuel.

They’re eating out, taking vacations, buying cars, playing golf, upgrading their electronics, spoiling their kids, fixing up their houses … you name it, people are saying: “Gimme some of that!”

And consumers are using the little plastic cards in their wallets (or using smartphone apps) to pay for most of those wants and needs.

No wonder Visa (V) and Mastercard (MA) each reported record revenue in the most recent quarter. 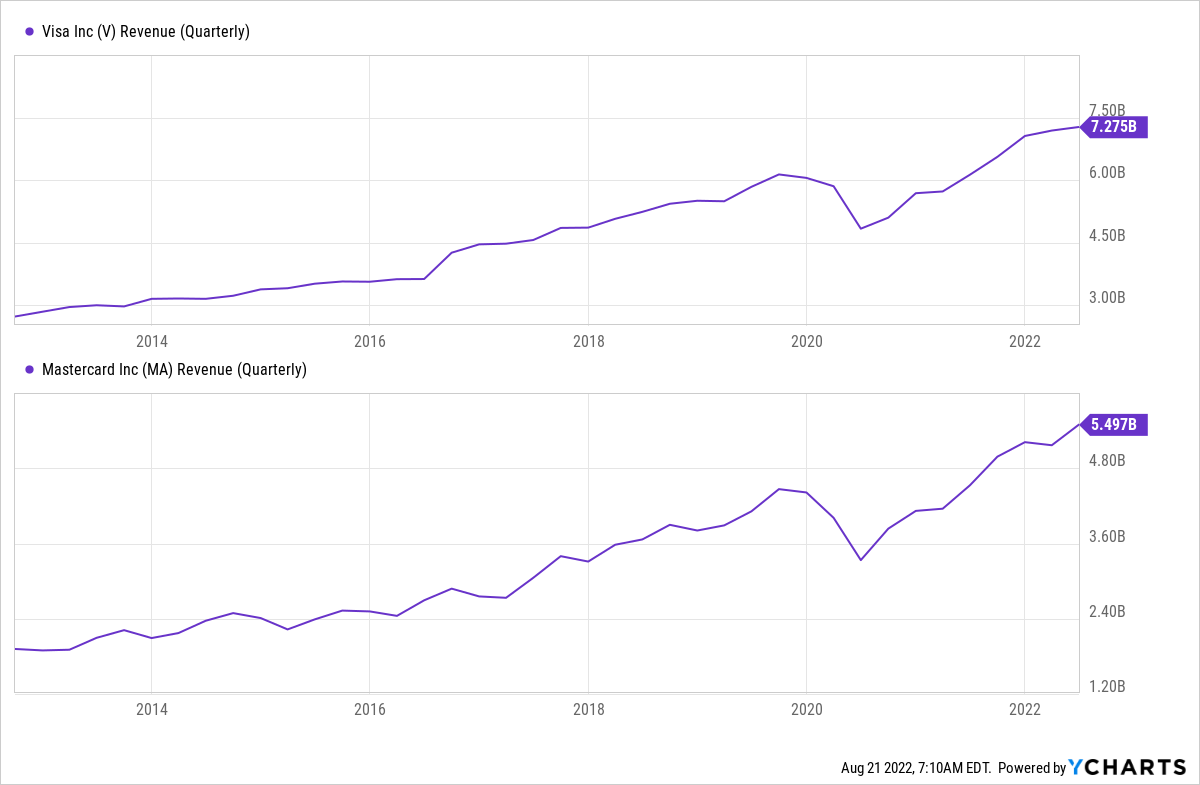 Visa’s sales in the three-month period ending June 30 was 18.5% higher than it was in its best quarter before the COVID-19 pandemic, and Mastercard’s was 23% greater.

With all that as a backdrop, I decided to make the two payment-processing giants this month’s main buys for our Income Builder Portfolio. On Friday, Aug. 19, I executed purchase orders for more than $600 each worth of Visa and Mastercard stock on behalf of this site’s co-founder (and IBP money man), Greg Patrick.

Limit orders were used for all buys; as sometimes happens, the CTBI trade executed in 2 transactions a moment apart.

In addition to building up our positions in the credit-card duopoly, we used the rest of Greg’s $2,000 monthly allocation to add to two of the IBP’s recent acquisitions — regional bank Community Trust Bancorp (CTBI) and truck-engine maker Cummins (CMI). (My previous article included my investing thesis for CTBI — HERE. Cummins first entered the portfolio last year — HERE.)

For consumers, Visa and Mastercard are convenient, effective ways to pay for items. Businesses large, medium and small would have trouble functioning without the two companies, which take a small percentage of each purchase.

They really are money-making machines with outstanding returns on equity and eye-popping margins, as the following graphs from Simply Safe Dividends show. 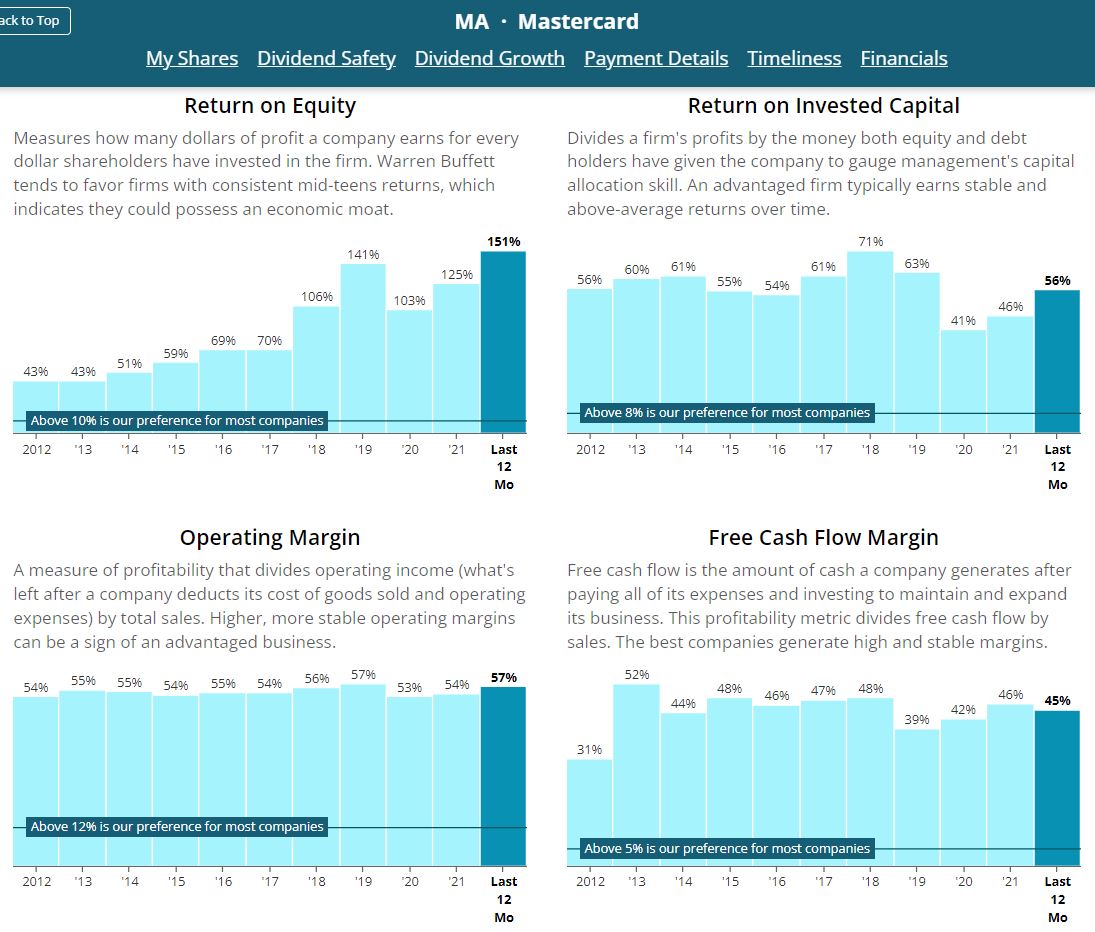 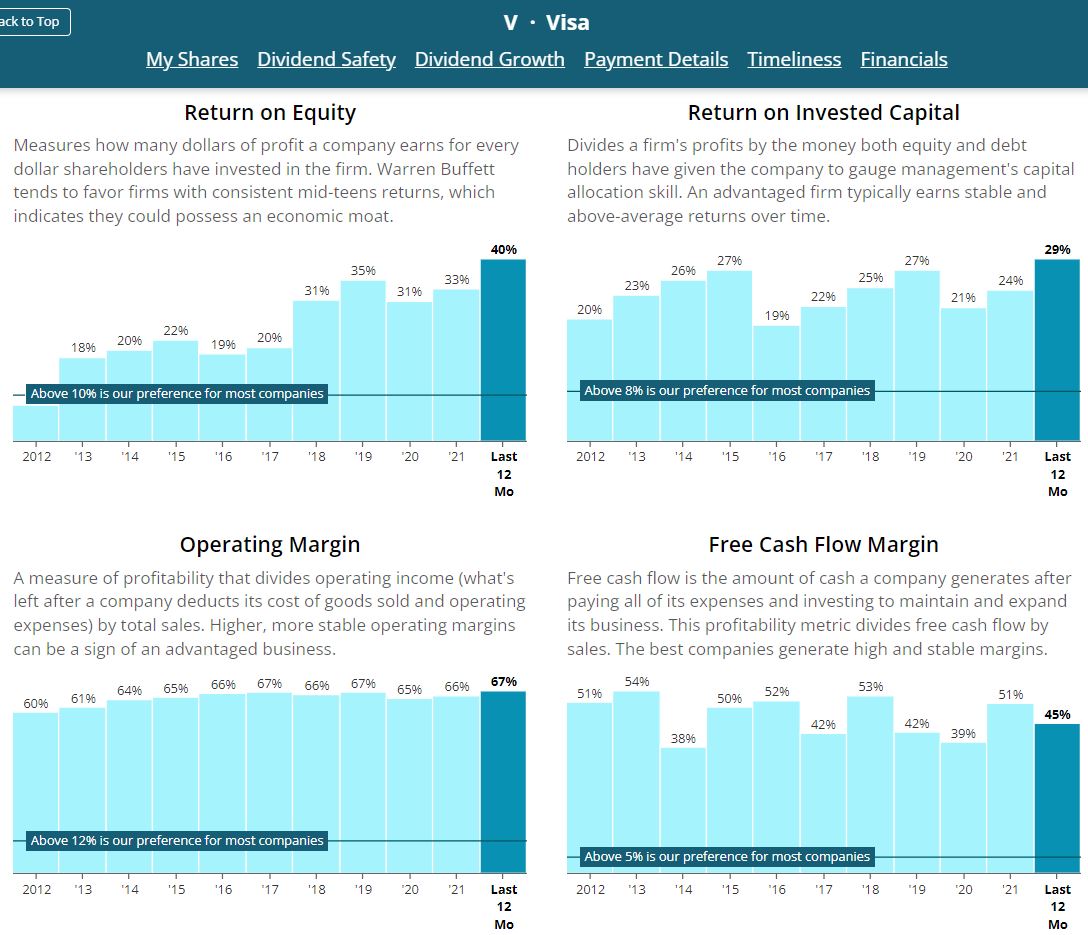 Here’s what Value Line analyst Sharif Abdou had to say after digesting the data from Visa’s July 26 earnings report:

At the three-quarter mark of fiscal 2022, Visa is on pace for stellar results. (Year ends on September 30th.) Revenues advanced 19% in the June interim, from the prior-year period, to $7.275 billion, driven by solid transaction activity across most geographies. Adjusted earnings jumped 33% in the latest three-month stretch, to $1.98 per share, thanks to top-line growth and effective cost controls. (Revenues and share net both represented quarterly records for Visa.) Transaction activity has been on the mend for the last several quarters after suffering during the height of the pandemic. During the fiscal third quarter, total volumes in Europe, Asia/Pacific, and Latin America increased 17.0%, 11.9%, and 26.9%, respectively, from the year earlier. Business was also brisk in North America, with volumes up 9.7% and 23.8% in the United States and Canada, respectively.

Pretty much the same kind of things could be said about Mastercard’s Q2 earnings call two days later … except Morningstar’s Brett Horn was even more enthusiastic about that company:

Mastercard’s second-quarter results largely echoed what we saw from Visa, although Mastercard posted stronger growth. We think the bounce-back in travel and cross-border volumes positions wide-moat Mastercard for outsized growth in the near term, absent an economic downturn. To that point, management joined Visa in stating that consumer spending remains strong. … Cross-border transactions have been the biggest swing factor for Mastercard in recent years, given much higher fees for these transactions and the dramatic decline in travel during the early stages of the pandemic. But this has turned into a material tailwind over the past year as the pandemic impact has faded and reversed. … Cross-border travel-related volumes are now at 118% of the 2019 level. We continue to expect a full recovery in travel spending over time, and this should drive outsized growth in the near term. … Stronger revenue translated into better profitability given the scalability of Mastercard’s business model. Adjusted operating margins (based on net revenue) improved to 57.9% from 53.2% last year. Margins are now roughly in line with pre-pandemic levels.

The vast majority of analysts agree with those bullish takes.

Interestingly, one analyst — Piper Sandler’s Christopher Donat — actually has an “underweight” rating on Mastercard — the equivalent of “sell.” He’s also “neutral” on Visa. Here’s his thesis:

Europe is MA’s largest region and V’s second largest. We think that a more challenging revenue scenario in 2023 will put future pressure on earnings estimates and the P/E multiples for both companies. … While our biggest concern is a European recession, other factors also weigh on our outlook. We think underperformance of payment growth in Asia might represent a ‘new normal’ that lasts for years. We believe inflation and other macro factors could decrease discretionary spending and ultimately slow cross-border activity.

Despite those concerns, Donat’s reduced price targets — $357 for Mastercard and $239 for Visa — were higher than the price we just paid to add to the IBP’s stakes in the companies. In Visa’s case, the target price is 12% higher than the $213 we paid.

As worst-case scenarios go, I can live with that.

Both companies have proven to be resilient over the years. For example, the following graphs show how strongly they were able to rebound from the pandemic downturn.

V and MA are included in Value Line’s 100 “Highest Growth Stocks.” (To qualify, a company’s annual growth of sales, cash flow, earnings, dividends and book value must together have averaged 10% or more over the past 10 years and be expected to average at least 10% in the coming 3-5 years.)

Even more impressively, they are 2 of the 7 Highest Growth Stocks to receive top scores in both Safety (which measures the total risk of a stock relative to the roughly 1,700 companies Value Line covers) and Timeliness (which measures the probable price performance over the next 6-12 months compared to all other stocks VL covers).

Unsurprisingly, Value Line said Mastercard “would be a solid addition to most portfolios,” and “top-quality Visa shares should appeal to a broad range of investors.”

After adding to the Income Builder Portfolio’s Visa, Mastercard, Cummins and Community Trust Bancorp positions on Aug. 19, I wasn’t quite done for the day.

I sold what was left of the small Warner Brothers Discovery (WBD) stake that the IBP had received from an AT&T (T) spin-off, and I used the proceeds to buy a dozen shares of downtrodden AT&T.

I’m actually mad at myself for not selling WBD right after the spin-off, when the price was higher. There really was no reason to hang onto just a few shares of an unproven, non-dividend-paying company in a portfolio that focuses on high-quality, dividend-growing businesses.

Of course, some would say AT&T hasn’t been a very high-quality business for many years now, and it would be difficult for me to dispute that.

T’s quality scores pale in comparison to those of Visa, Mastercard and Cummins — and even in some respects to CTBI, a small-cap company that isn’t covered by most analytical firms and rating agencies.

AT&T has been the IBP’s poorest performer, with a total return of minus-22% (even if I generously include the value of the just-sold WBD position). It also cut its dividend nearly in half after losing the free cash flow that Warner Brothers had provided.

So why would I want to add even one more share, let alone 12? Well, now that AT&T is finally concentrating on its telecommunications business again, I want to give the company a chance.

As Value Line analyst Wayne Nef said: “AT&T shares are trading at the low end of their traditional valuation range on a price/sales, price/book value, price/earnings, and price/cash flow basis. All told, we like the stock here for its long-term recovery potential.”

Although AT&T looks the cheapest of this month’s IBP buys, analysts in general feel good about all of them. (I didn’t include CTBI in the following table because it receives so little coverage.)

It might seem a little crazy for Visa and Mastercard to have so many buy ratings given their sky-high price/earnings ratios, but the fact is that this actually is normal for the companies.

Both MA and V are very low-yielders — well under 1% — so I look at the dividends they pay as a “bonus” rather than a reason to invest in either of them.

Having said that, both have been aggressively growing dividends for years. 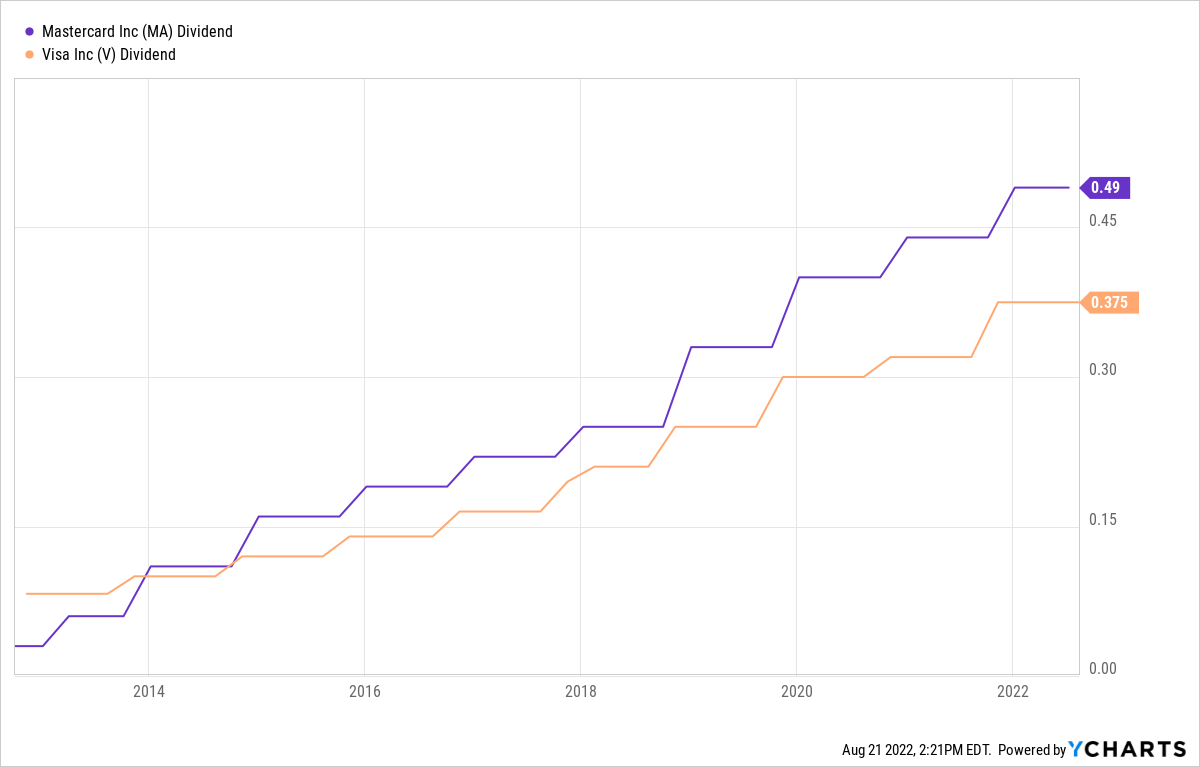 Most recently, Visa raised its dividend 17.2% and Mastercard 11.4%. Visa usually announces its annual increase every October, so we won’t have to wait too long to see what the next hike will be.

Cummins, Community Trust Bancorp and AT&T grow their dividends more slowly (or, in T’s case recently, not at all), but they all have comparatively high yields. Here is some income-related information on these 5 IBP positions:

The August buys added about $47 to the IBP’s annual income stream, and these five companies will combine to produce about $230 in the coming year — approximately 6% of the portfolio’s $3,969 total.

This was the fourth time we’ve bought Visa and Mastercard for the Income Builder Portfolio, and with this purchase we’ve invested about $2,200 into each stock.

The very first time I selected the companies, back in April 2020, I talked about setting up a “contest” between the two. Well, MA has outperformed V by a wide margin since then. 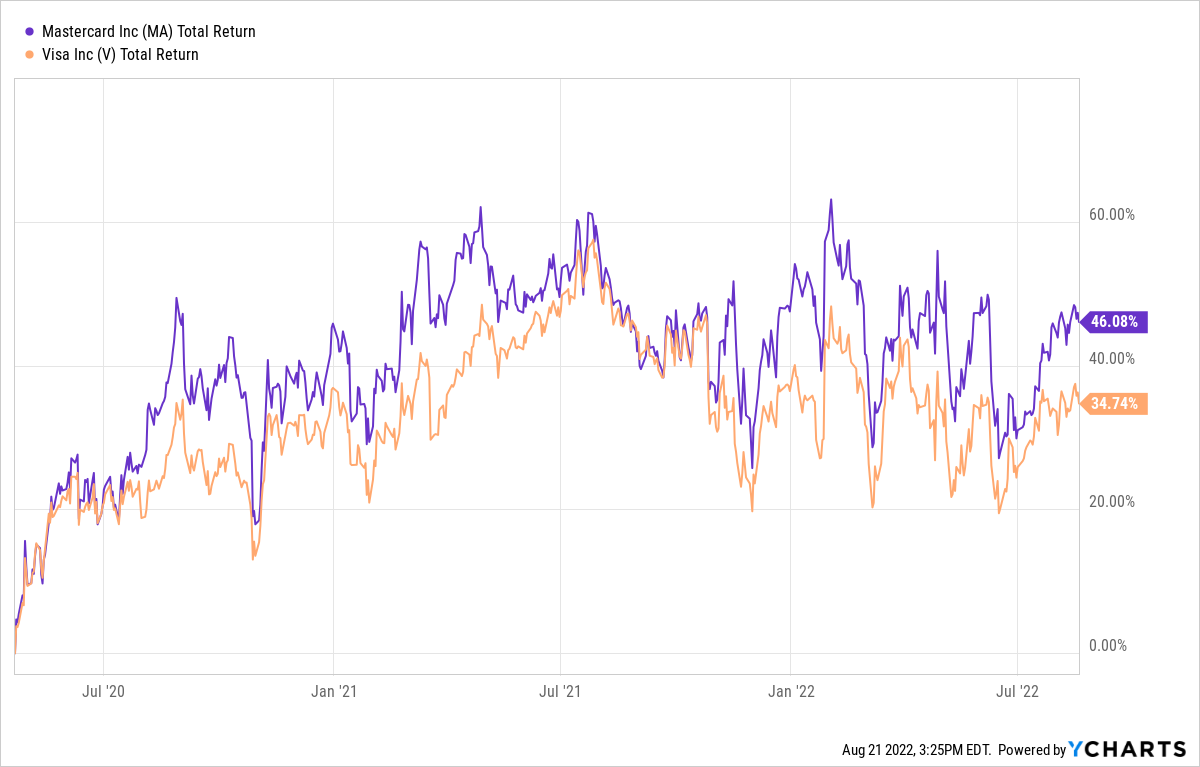 When also factoring in our May 2020 and May 2021 purchases of the stocks, the IBP’s Mastercard position has fared much better than Visa overall.

That continues the pattern of the last 7 years, during which Mastercard has outperformed its larger rival 331% to 242%. It wasn’t always like that, however, as Visa was the decisive total-return “winner” from 2012-15.

Going forward, if V continues to be a relative laggard, I will stop dividing the IBP’s investments evenly between the companies and instead will favor Mastercard. So I guess you could say the contest is really on now!

For an in-depth look at all 48 of the portfolio’s positions, as well as links to every IBP-related article I’ve written, check out the home page HERE.