Just about anybody who wants a job has one — a sharp contrast to a “normal” recession, when unemployment is high. Also, despite an inflationary cycle that has pushed up prices on practically everything, consumers are spending money as if they haven’t a care in the world.

Oh, and right when it looked like the stock market was headed for a bloody crash, it rebounded strongly in July, with all three major indices showing strong gains. 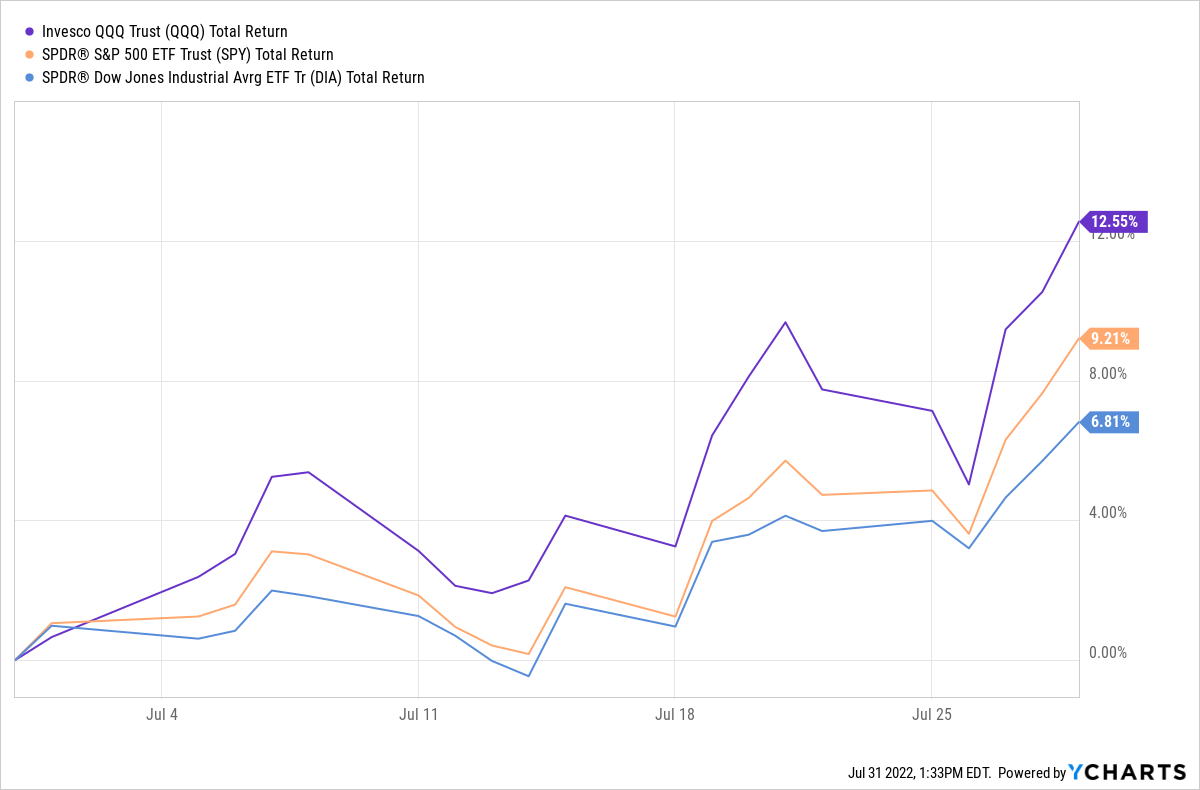 This is not me denying that we’re in a recession (or that one is imminent). I simply don’t know, and neither do most people who claim to know.

This is me saying that perhaps a message is being sent to investors, especially those who only have a relatively small amount of money to invest at regular intervals: Keep on keepin’ on.

That’s certainly how I approach the Growth & Income Portfolio, which I’ve been building with small investments every month since June 2020.

Eventually, in 15-20 years, I plan to use the assets to pay some of my grandkids’ college costs. No wonder Logan, Jack, Owen and Piper are happy as can be — they sure as heck aren’t thinking about past, present or future recessions!

Although I’ve earmarked this endeavor for college costs, folks can have all kinds of reasons to make regular, small investments — maybe it’s for retirement or a boat or a vacation of a lifetime. (That’s why I changed the portfolio’s name from the original Grand-Twins College Fund.) 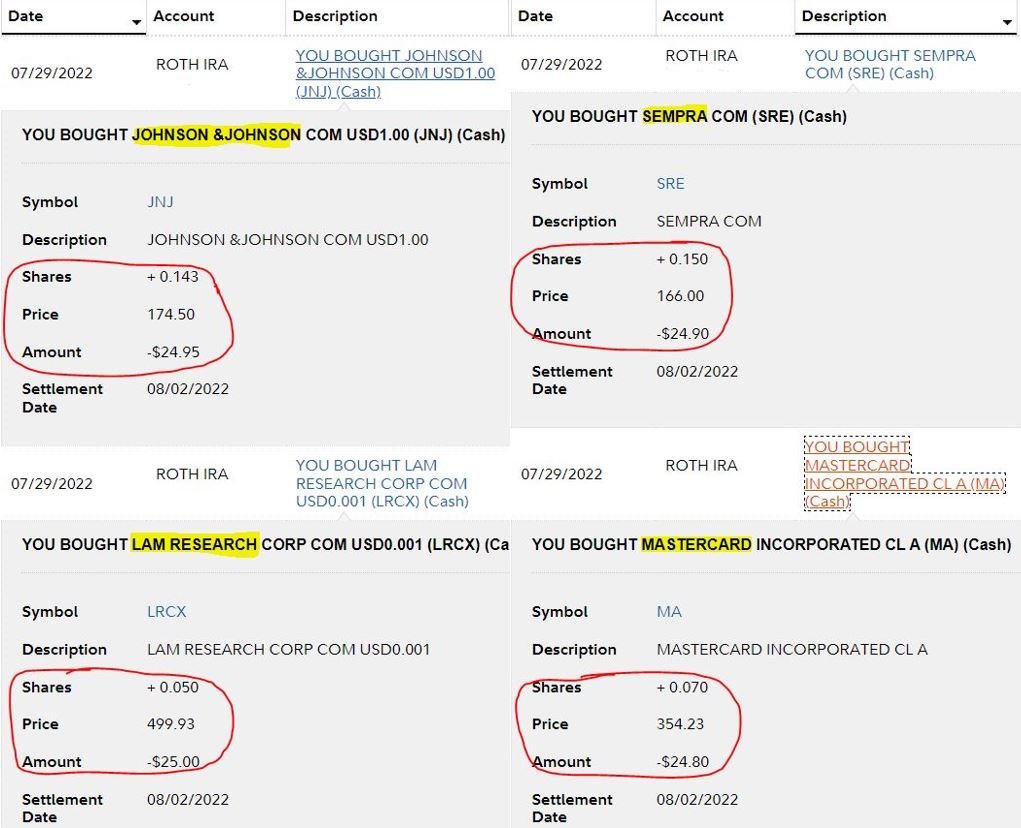 These buys, along with the market rally, pushed the value of this 18-stock portfolio to about $5,100 — more than $500 higher than where it stood at the end of June. 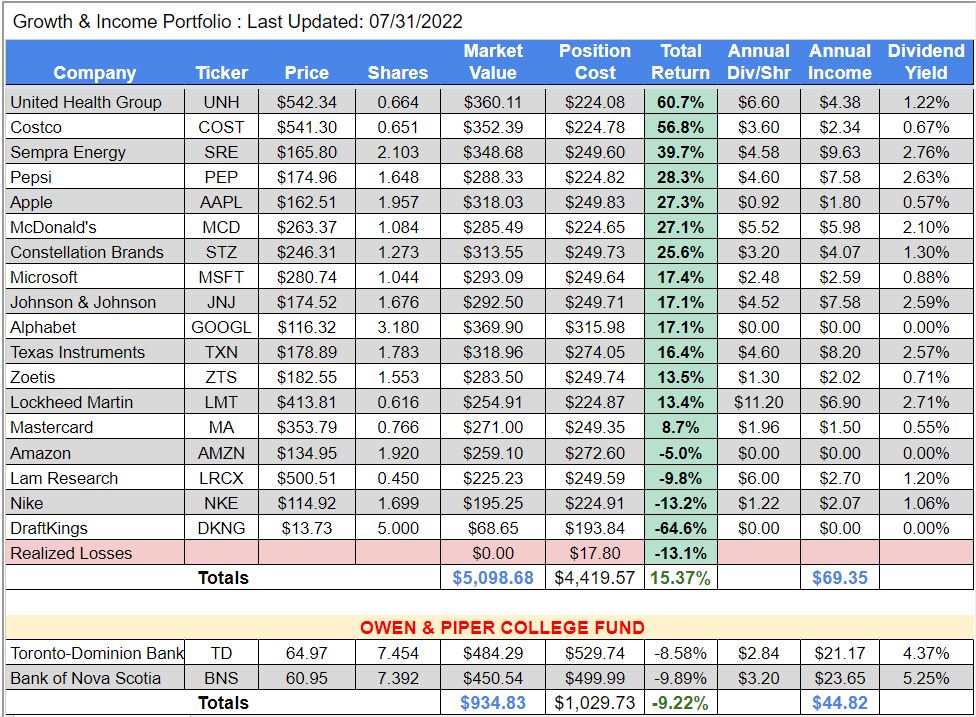 I also bought another two shares of Canadian bank Toronto-Dominion (TD) for the Owen/Piper side of things; I started investing on behalf for our two youngest grandchildren in October.

Just as July was a marvelous month for the overall market, it was filled with big gains for the GIP.

The 14 companies in which there were no new investments during July combined to have a total return of 9.6%, even better than the 9.2% posted by the S&P 500 Index. Six had double-digit-percentage gains over June, led by Amazon (AMZN) at 27%. 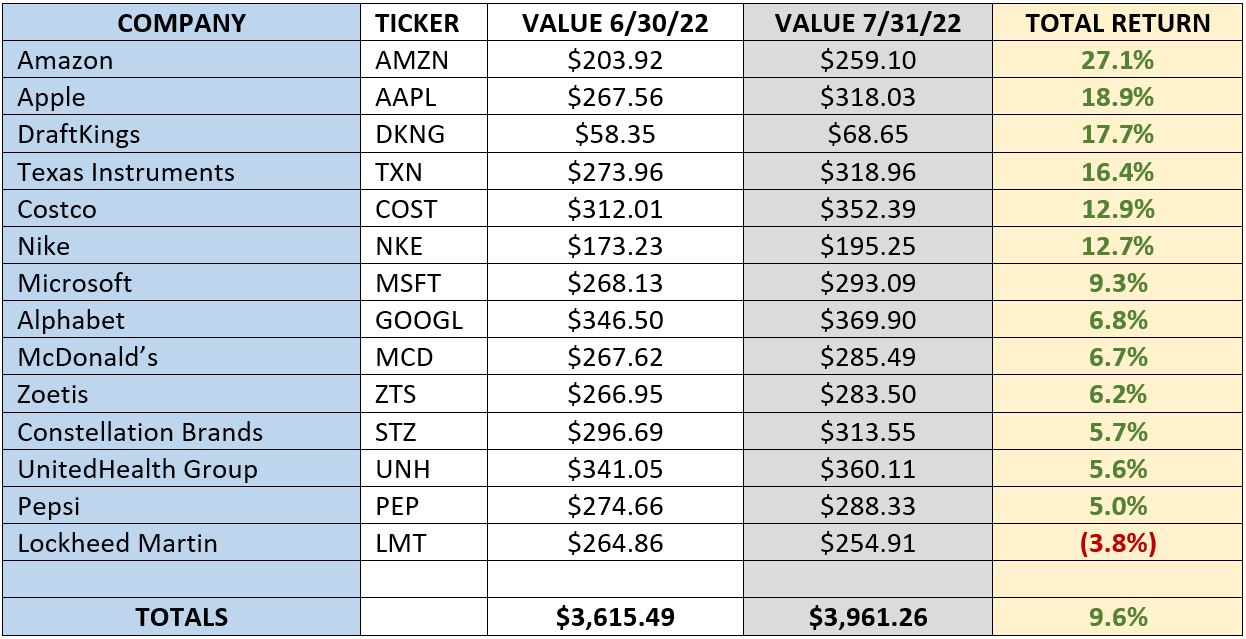 All of those green numbers were a welcome sight because, like the market, the GIP had been beaten up pretty badly during the first half of 2022.

Three of the stocks I just bought for the portfolio – Lam Research, Mastercard and Sempra – also had market-mashing Julys. (The fourth, Johnson & Johnson, didn’t fare as well last month but is up 3% in 2022, compared to minus-13% for the market.) 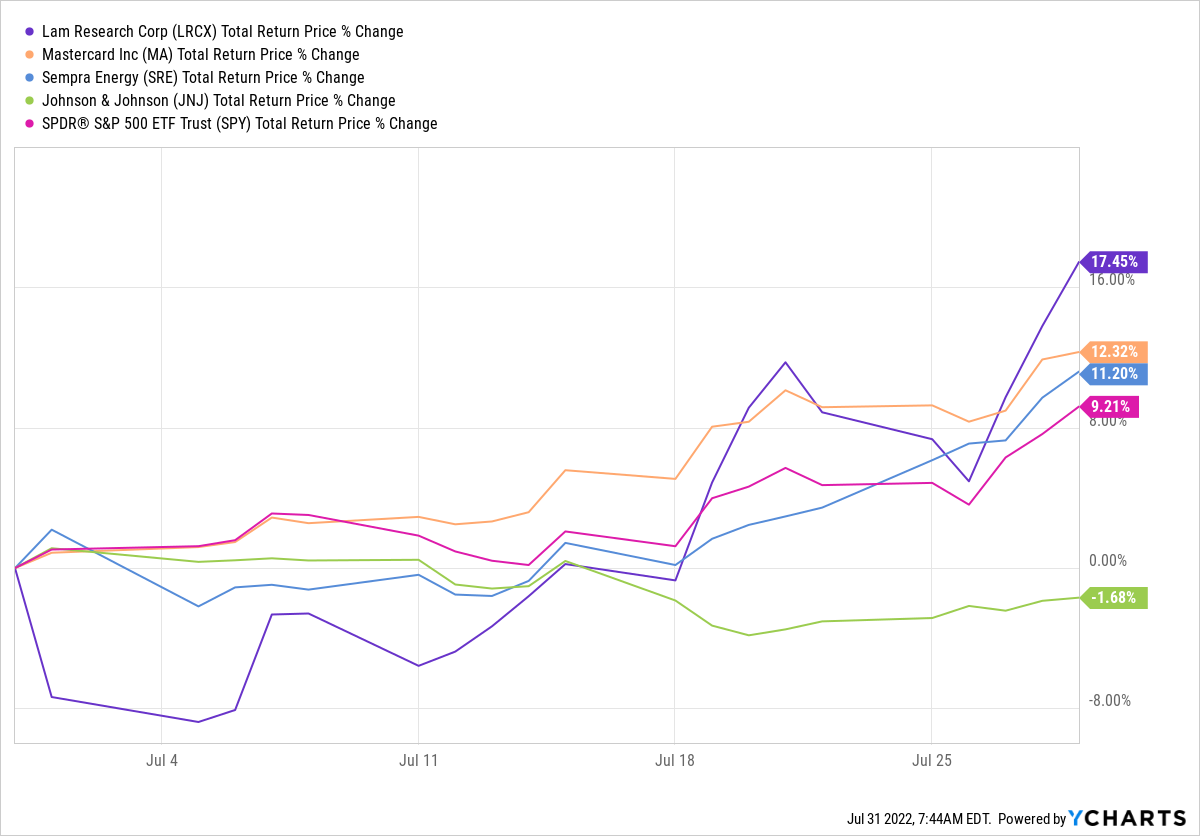 I have added two companies to the portfolio in the last year — Nike (NKE) and Lam Research. While the former is an iconic name in retail, the latter is unknown to many.

Lam is a “pick-and-shovel” business that makes equipment for semiconductor firms. It had been one of the portfolio’s laggards, but it has started benefiting from recently passed legislation that will pour money into the U.S. chip industry.

I still really like Lam Research as a long-term investment. And as you’ll see a little later in the valuation section of this article, most analysts are quite bullish on LRCX.

July was the second consecutive month during which one of the Growth & Income Portfolio’s stocks experienced a 20-for-1 split. For each share of Alphabet (GOOGL) the portfolio held, I received 19 more on July 18. In June, it was Amazon that split.

The split applied to fractional shares, too, so the portfolio’s tiny pieces of GOOGL and AMZN now look bigger, with 3+ shares of Alphabet and nearly 2 of Amazon.

Of course, neither position became any more valuable just because of the split. One share of any company at $2,000 is worth the exact same as 20 shares at $100.

Companies do stock splits for a variety of reasons, often saying they want shares to be more “accessible.” While a few brokerages — including Fidelity, where I house the GIP — make it possible to buy fractions of shares, most do not.

With both Alphabet and Amazon having been priced in excess of $2,000/share, that was out of reach for some investors. Post-splits, at the end of July, GOOGL was $116 and AMZN $135.

Some believe that a lower per-share price can lead to a rally because there will be more buyers, but that’s often not the case. For example, since its split 2 weeks ago, GOOGL has underperformed the S&P 500 Index. 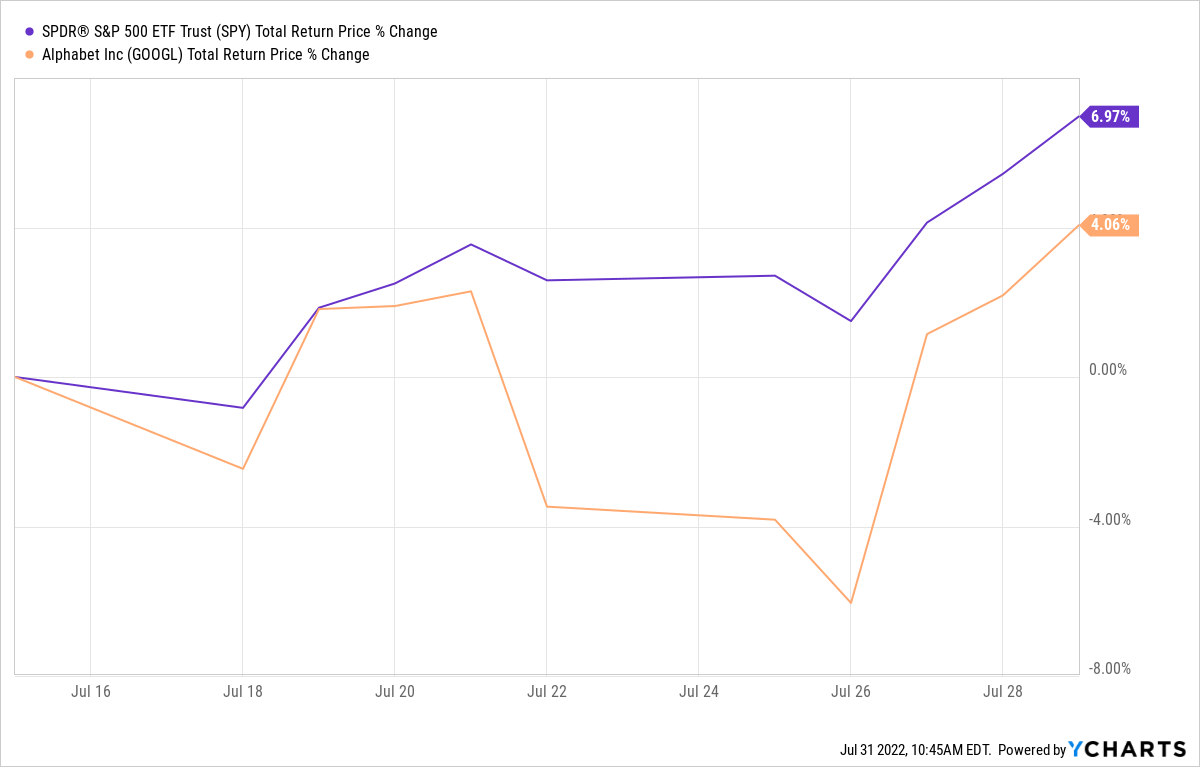 Even the prospect of the split failed to entice investors. Since Alphabet’s board announced the impending action on Feb. 1, shares of stock were down 15.5% through July 31 — almost double the overall market’s loss.

Amazon has beaten the index since its June 6 split, but as you can see looking at the far right side of the following chart, almost all of that outperformance came after the July 28 earnings report pleased investors. In other words, it had little (or even nothing) to do with the split. 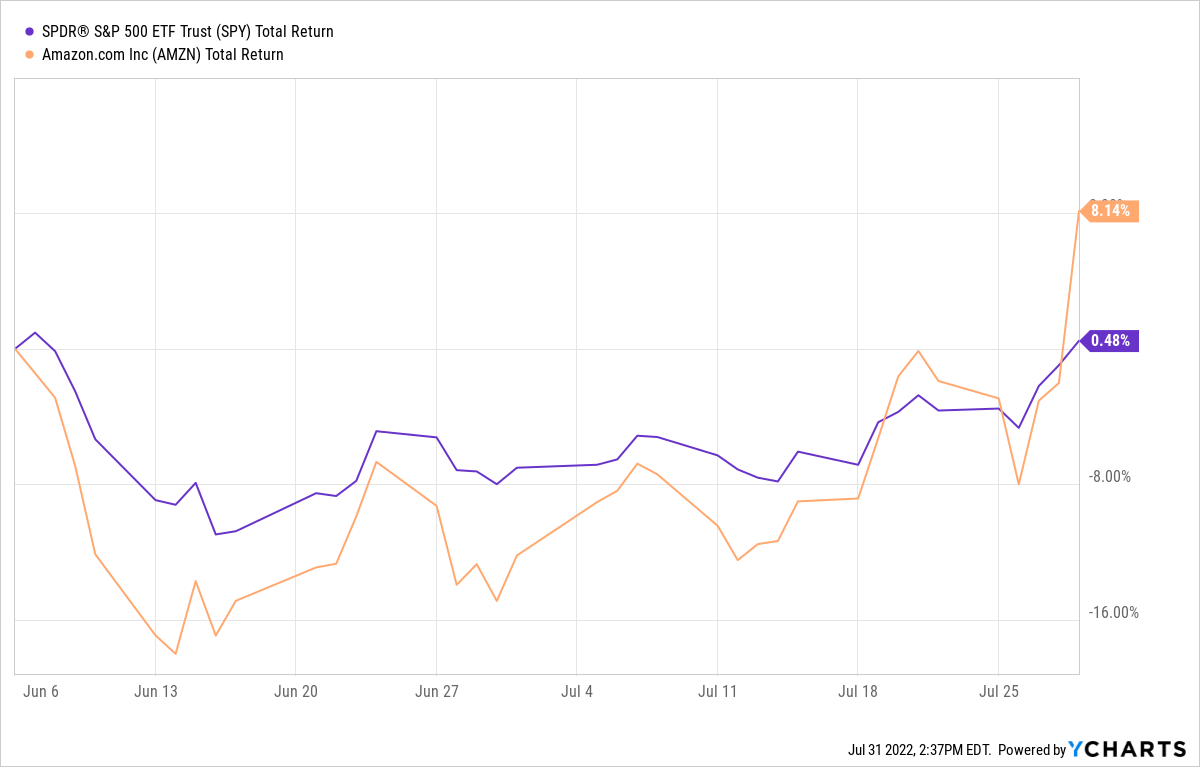 So if you hear a TV talking head or any other self-proclaimed market guru say you should buy a stock because it’s splitting, don’t accept what they’re saying as some iron-clad rule of investing.

Whether for the GIP, for the other project I manage for this site (the Income Builder Portfolio), or for my personal portfolio, I stress quality when selecting stocks.

The four GIP buys I just made were of wide-moat, fundamentally sound operations, with safe dividends and solid credit ratings. And Toronto-Dominion has long been considered one of the strongest banks anywhere.

Johnson & Johnson is the only company in the world with a Triple-A credit rating from Standard & Poor’s. Lam’s management is said to allocate capital in an “exemplary” manner. Mastercard gets Value Line’s highest financial strength grade. Sempra is a well-run utility.

Lam and Mastercard also are listed among Value Line’s “Highest Growth Stocks” — to be included, a company’s annual growth of sales, cash flow, earnings, dividends and book value must together have averaged 10% or more over the past 10 years and be expected to average at least 10% in the coming 3-5 years.

As if that list isn’t exclusive enough, Mastercard is one of only a handful of stocks on it to receive Value Line’s top “safety” score; the same is also true of fellow GIP components Alphabet, Amazon, Apple and Microsoft.

The July market surge made my end-of-the-month buys for this endeavor a little more expensive. The following table shows valuation information and analyst target prices.

Although Sempra seems pricey here, UBS recently named the San Diego-based utility one its “highest conviction” stock picks for the remainder of 2022, setting a $198 target price.

As you can see by the valuation table, Lam Research is getting a lot of analyst love — especially from Morningstar and Credit Suisse. 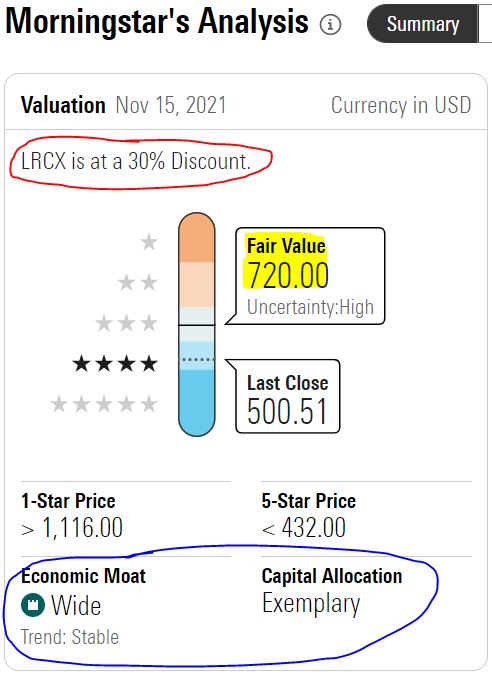 In explaining why it believes LRCX is trading at a 30% discount, Morningstar said: “Our fair value estimate is $720 per share, supported by a strong outlook for wafer fab equipment spending in the coming years. … We think prospective investors should find current levels attractive based on Lam’s favorable long-term prospects.”

As for its $750 target, which suggests a 50% upside for Lam over the coming 12 months, Credit Suisse said: “We see the long-term prospects of LRCX and the sector as particularly attractive.”

Mastercard is another interesting name here. Its P/E ratio, as always, looks crazy-high … but it’s actually lower than the stock’s 5-year average. And 20 of 21 analysts monitored by TipRanks call MA a buy, with an average target price that suggests a 17% upside.

$3.26 doesn’t seem like much, but it’s 7% more than the same three positions paid in the second quarter, and it’s roughly double what the portfolio kicked out in July 2021, when Sempra was the only of the three companies the GIP owned at the time.

If Lam Research continues its pattern of the last few years, it will announce its next dividend raise in late August. LRCX has paid a dividend only since 2014, but it has aggressively grown it since then. Last year’s increase was 15.4%. 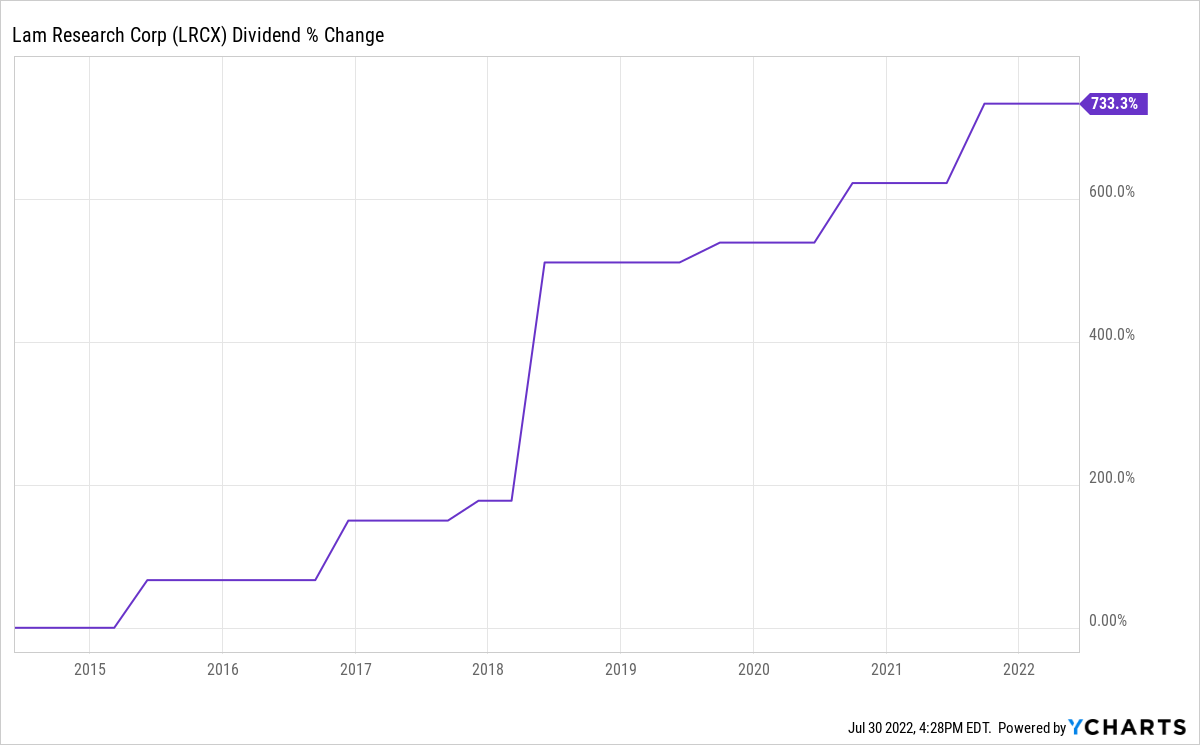 At 1.2%, Lam is a low-yielder, but it’s just the kind of equity that, over time, can bring investors both growing income and nice total return.

It’s been interesting to hear economists talk about the state of affairs.

Most who believe we’re in a recession are twisting themselves into pretzels to explain why it’s so different from every other recession of the past several decades, especially when it comes to the job market. 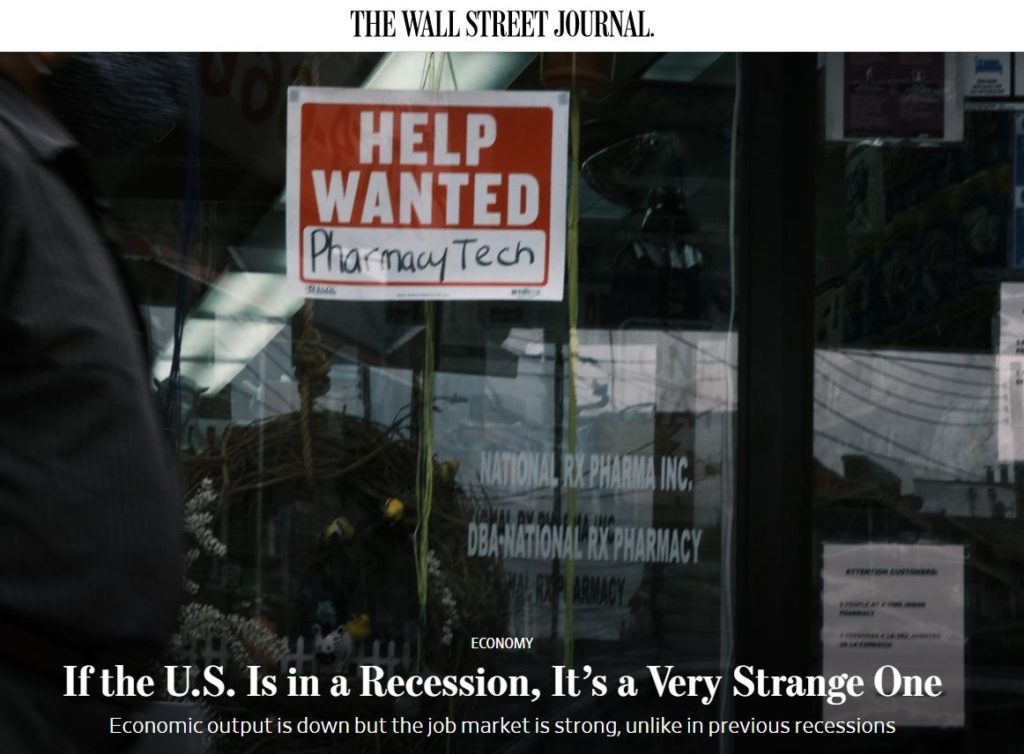 Many who think we’re not in a recession still talk about the dangers of high inflation, with some warning that a recession probably is coming.

But for “small investors” — I’m talking about those who invest a few dollars, a few hundred dollars (as I do with the GIP), or even a few thousand dollars a month — it’s practically a moot point, isn’t it?

We don’t know when the market bottom will be (or if it’s already come and gone), or when the recession will strike (or if it’s already here or if a recession will be avoided altogether). We only know that we want our investments to have done well over time … and the best way to ensure that’s the case is by investing consistently, over many years, in high-quality companies.

I mean … do these guys look worried at all? 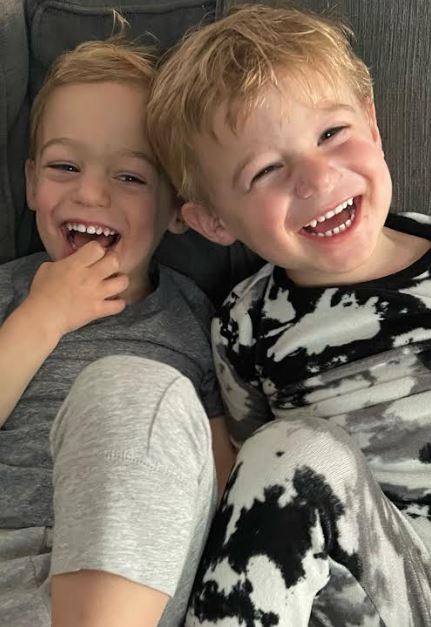 A regularly updated table of the Growth & Income Portfolio’s holdings, as well as links to all of my GIP-related articles, can be seen on the portfolio’s home page — HERE.

And for those who are even more into dividends, check out our Income Builder Portfolio — HERE.

Investors are strongly urged to conduct their own due diligence before buying any stocks.