One of the many great things about being a kid: Even when the stock market is tanking, their minds are on stuff that really matters … like enjoying Bomb Pops at the beach. 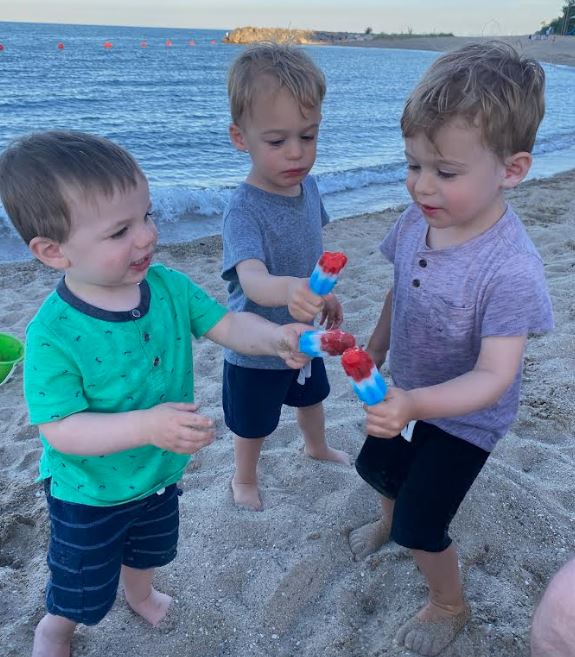 That photo of my three grandsons — 20-month-old Owen, and almost-3-year-old twins Jack and Logan — was taken in late June during a family gathering in the Chicago suburbs. Owen, who was visiting from Seattle (having traveled with his parents and 3-month-old sister Piper), loves to say, “Cheers!” And who needs to clink champagne glasses when you have Bomb Pops?

For investors, life in June wasn’t quite as fun and carefree, as the S&P 500 Index fell more than 8%. For that matter, the entire first half of 2022 was a bummer — with the Nasdaq crashing nearly 30% for its worst first half on record and the S&P 500 declining 20.6% for its worst opening six months of any year since 1970. 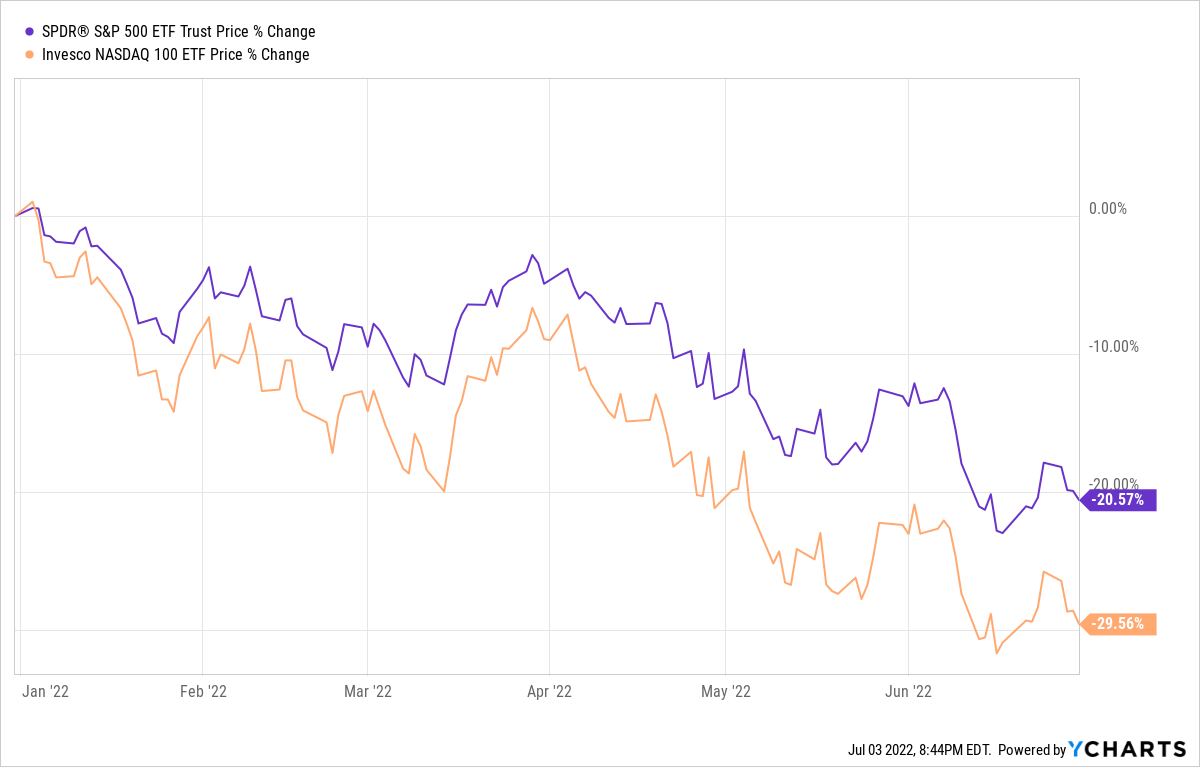 It was a market-wide selloff, too, as Energy was the only sector in positive territory through June 30. Companies in the Consumer Discretionary, Communications Services and Information Technology sectors were especially affected by surging inflation, supply-chain issues, higher interest rates and labor shortages. 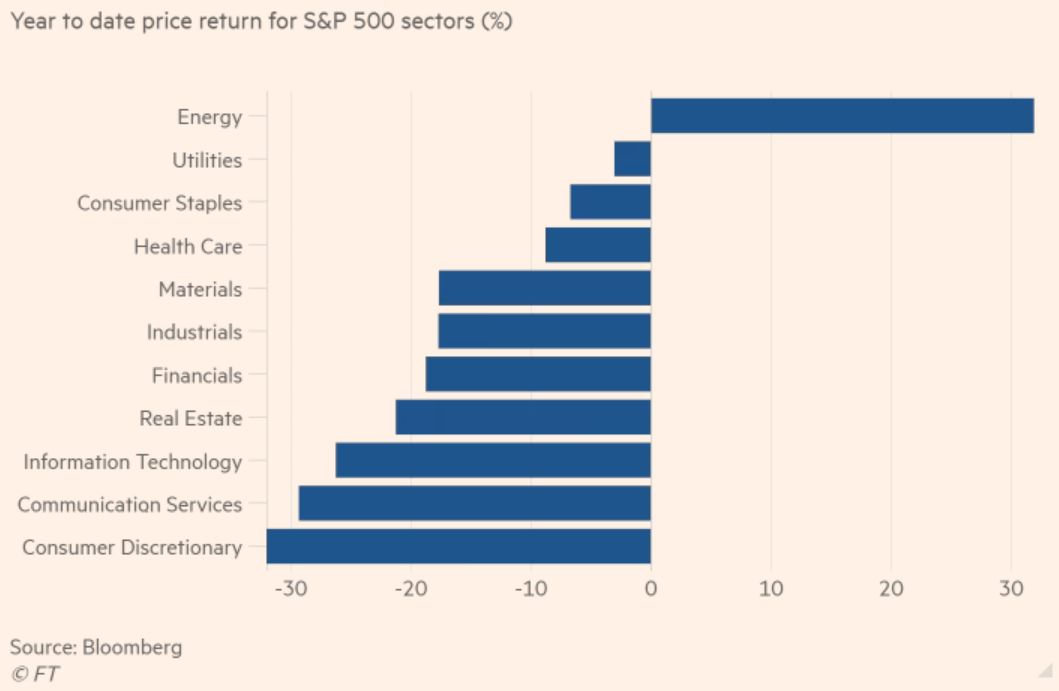 So it’s not very surprising that the Growth & Income Portfolio — which I launched two years ago to eventually help pay for Jack and Logan’s college costs — had a rough June, too.

The 14 companies in which there were no new investments (other than dividend reinvestments) during June combined to have a total return of minus-5.4%. Not great, obviously, but not as bad as what happened in the overall market. 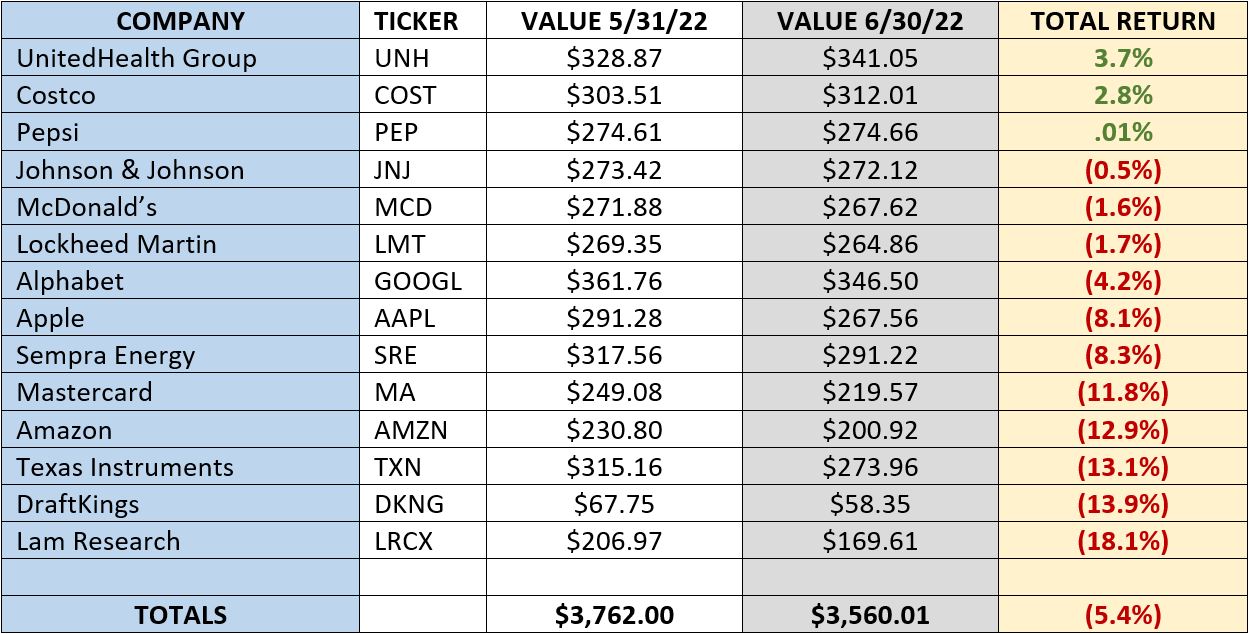 So how did I react to that swoon? By buying more stocks, of course. 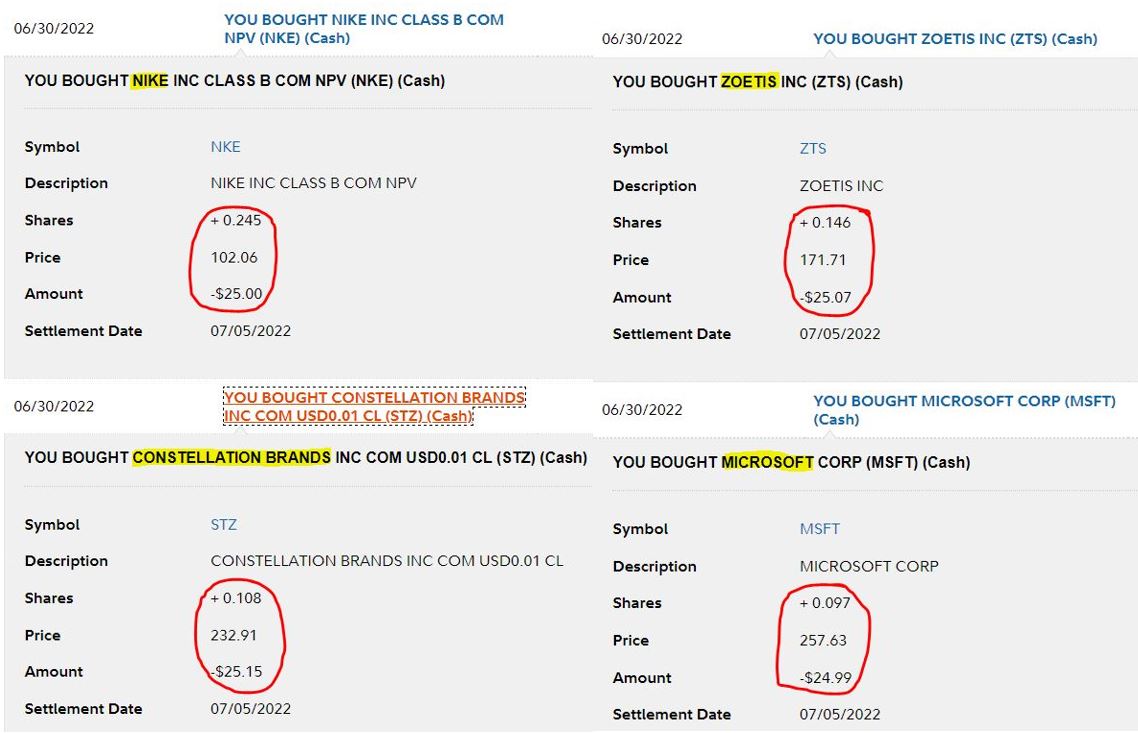 All of those buys were made on June 30. In addition, I added another $100 worth of Toronto-Dominion Bank (TD) within the separate account I set up for Owen and Piper. 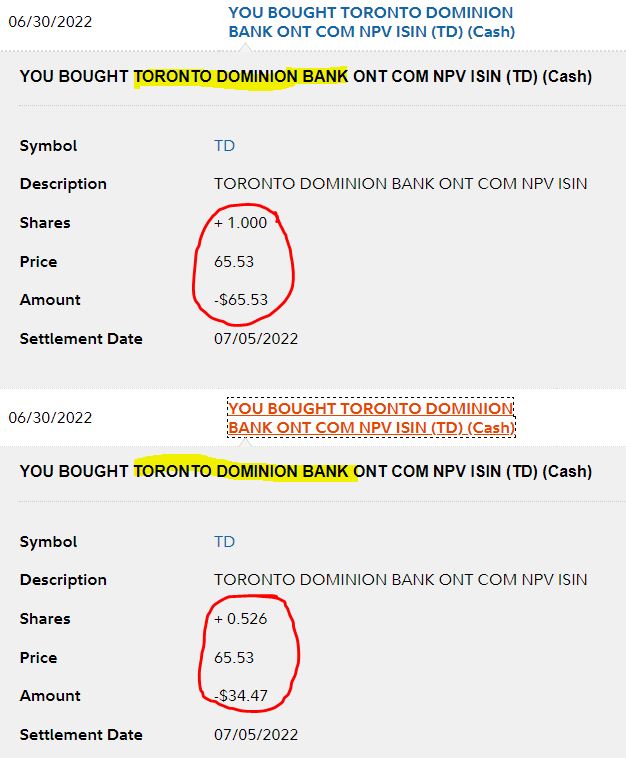 At the end of June, the 18 GIP positions had a cumulative total return of 5.7% — hardly spectacular, but roughly in line with the market’s performance in the time since the portfolio was established.

There have been some big winners, most notably UnitedHealth Group (UNH), Costco (COST) and Sempra Energy (SRE) … and some ugly losers, with gambling business DraftKings (DKNG) having been a poor speculative play so far. Meanwhile, both of the Canadian bank stocks I’ve been buying for Owen and Piper — TD and Bank of Nova Scotia (BNS) — have struggled. 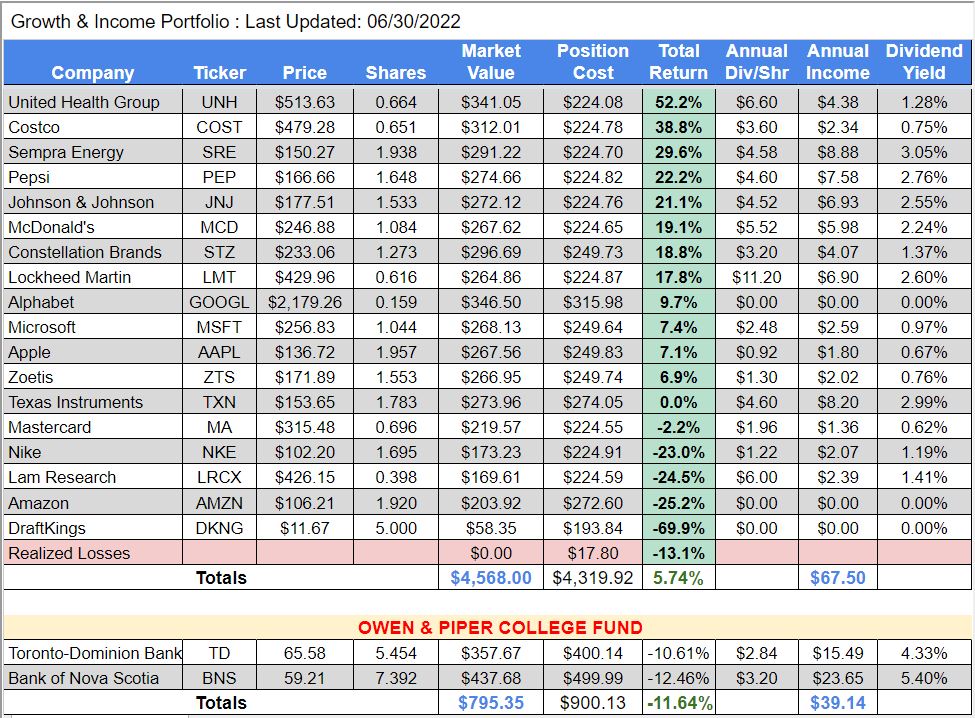 That above “live” table can be found on our Growth & Income Portfolio home page (HERE), where one also can see links to every GIP-related article I’ve written.

For those who normally make fairly regular stock buys (as I do for the GIP), I think it’s a mistake to stop investing just because the market is declining. An even worse error: panic-selling out of the market, figuring that you’ll get back in when the recovery starts.

Here’s an eye-opening graphic I saw on the Fidelity website, showing that a hypothetical investor who had missed just the best 5 days in the market over the past four decades could have reduced his or her long-term gains by 38%; someone who missed the best 10 days could have undermined their gains by 55%! 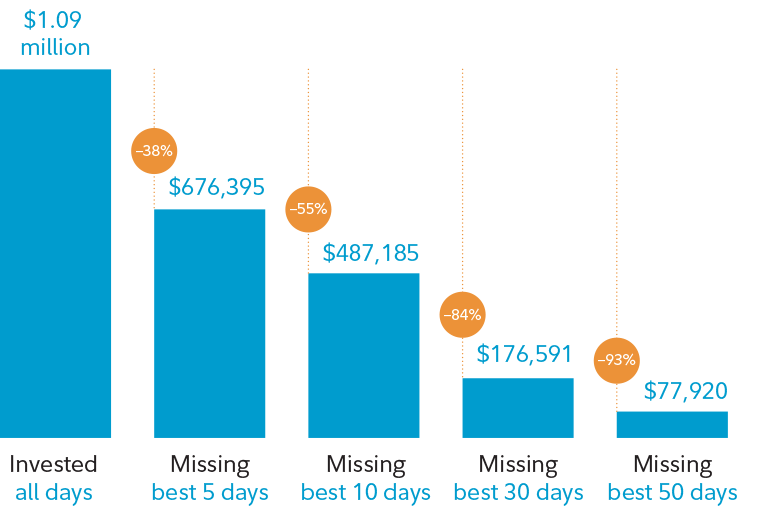 Furthermore, it’s not as if Mr. Market sends up a flare when things are about to improve.

Nobody knows when this downturn will bottom out or when a recovery will start. What we are pretty darn sure of, based on history, is that the market will recover at some point — and go on to make new highs. 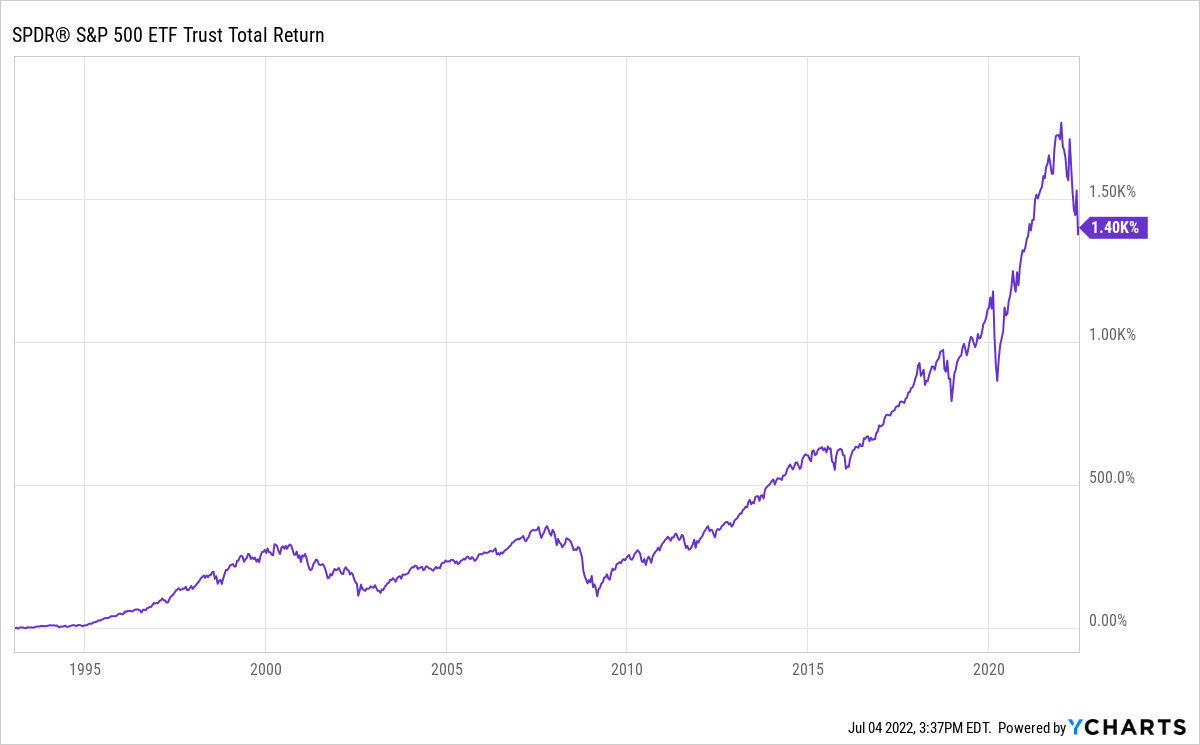 The Growth & Income Portfolio holdings to which I added are some outstanding companies. All have wide “moats” — or significant competitive economic advantages over their peers — and they also have other characteristics that make them high-quality operations.

Analytical and ratings firms give high scores to all these businesses, especially Microsoft, Nike and TD Bank.

One could make a pretty good argument that all four stocks I bought for the GIP, as well as Toronto-Dominion, are attractively valued now.

CFRA rates Microsoft a 5-star strong buy, saying: “We see lower downside risk – both probability and magnitude – for MSFT vs. many of its faster growing peers, especially given its very strong balance sheet providing more downside cushion than most large-cap stocks in any sector.”

Of Nike, Morningstar said: “We think investors are underestimating its brand strength and long-term growth prospects in China, as well as the potential for margin enhancement as it continues to shift to direct-to-consumer from wholesale distribution in North America.”

Argus is high on Zoetis, the largest pure-play animal health and vaccine company, saying: “We believe that the industry has solid long-term growth potential and that Zoetis will be able to optimize its leadership position. The company continues to outperform, and has now topped consensus revenue and earnings forecasts for 21 straight quarters.”

Morningstar recently raised its fair-value estimate for TD Bank, saying: “Toronto-Dominion has done an admirable job of focusing on its Canadian retail operations and growing into #1 or #2 market share for most key products in this segment. The bank also has #2 market share for business banking in Canada.”

Seven of the GIP’s 15 dividend payers had distributions in June. 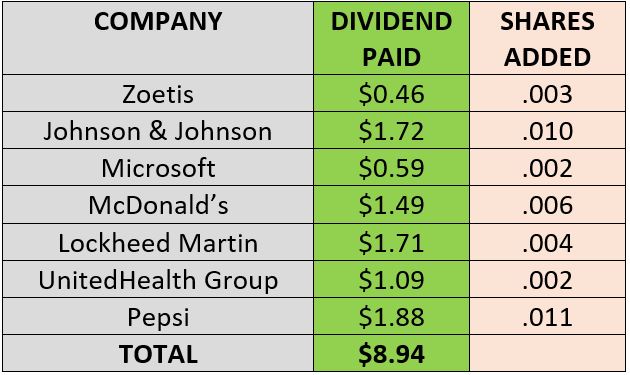 Now, $8.94 might not seem like big-time buckaroos, but it’s 61% more in dividends than the $5.55 than the same seven positions paid out in June 2021. And over time, there will be more and more growth.

How did the income produced by those holdings jump 61% in just a year? Well, all seven companies raised their dividends since then, including double-digit-percentage hikes by Microsoft, Zoetis and UnitedHealth; I also increased the size of each position through stock buys and dividend reinvestments.

The only GIP holding to announce a dividend increase in June was UnitedHealth Group, which gave shareholders yet another generous raise – 13.8% — albeit a somewhat smaller hike than in previous years. 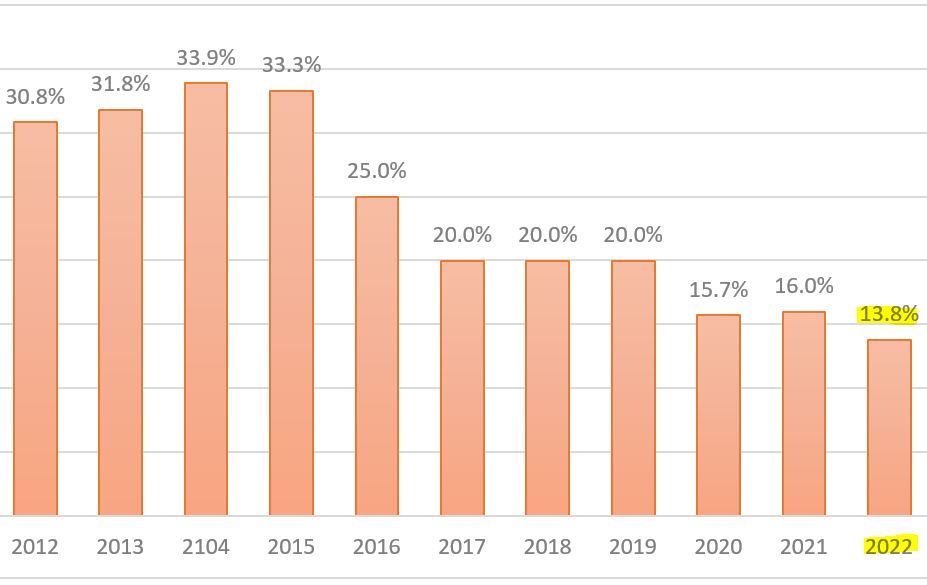 Earlier in the article, I wrote about the S&P 500 having its worst first half since 1970. I bring that up again because I wanted to add this: Back in 1970, the index rebounded from a 21% fall in the first six months to gain 26.5% in the second half of the year.

Mr. Market didn’t send up a flare signaling an imminent turnaround back then, either.

Do I expect the market to rebound like that this year? I have no earthly idea, though lots of economists seem to think a recession is more likely. What I do know is that I will gradually keep buying — especially in an account such as the Growth & Income Portfolio, where the buys are very small and the outlook is long-term.

Some 15-20 years from now, when Logan, Owen, Piper and Jack need the money to help pay college costs, I believe they’ll be glad we weren’t too afraid to invest in 2022. 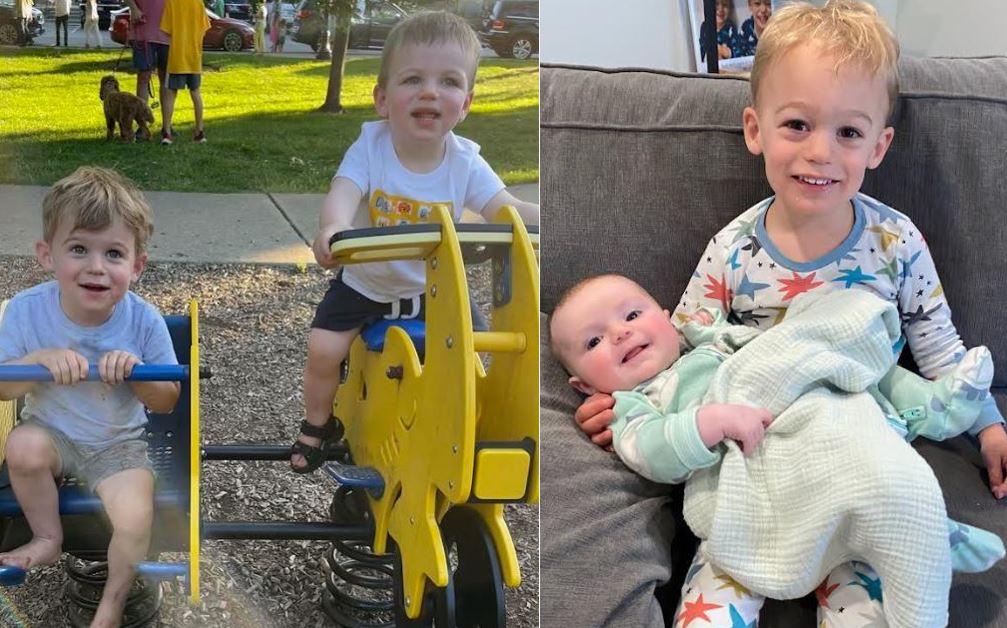 NOTE: Those interested in dividend-centric investing should check out my most recent buys for the Income Builder Portfolio — HERE. The IBP home page includes information on all 48 stocks in the portfolio, as well as links to dozens of articles — see it HERE.