On a drive from Chicago to Charlotte last weekend, my wife and I overnighted near Lexington, Ky. The next morning, we stopped at the Starbucks in the Kentucky town of London.

Actually, we couldn’t quite get to the Starbucks’ parking lot, as a long line of cars wrapped around the store and snaked down the frontage road.

We maneuvered into the lot of the business next door; my wife, who had ordered her grande Americano on her smartphone’s Starbucks app 10 minutes earlier, walked over to the store. She navigated the large crowd inside and got her coffee, which was waiting for her at the pick-up counter. A few minutes later, we were back on the road.

Although an anecdote like this is not necessarily the best justification for buying shares of a company’s stock, I was pretty impressed. This outlet in a tiny Kentucky town was bringing in beaucoup bucks even as many economists are warning that inflation is forcing consumers to give up “luxuries” such as premium coffee.

Then there’s this year’s steep drop in share price, which has moved the dividend yield above 2.5% and has made the stock more attractively valued. Put it all together, and I decided to increase the size of the Starbucks (SBUX) position in our Income Builder Portfolio.

On Wednesday, June 29, I executed a purchase order for 7 shares of the world’s largest specialty coffee chain on behalf of this site’s co-founder (and IBP money man), Greg Patrick.

As you can see, I used the remainder of Greg’s semi-monthly allocation to add to the IBP’s stakes in two of our smallest positions: industrial-gas company Air Products & Chemicals (APD), and apartment REIT Essex Property Trust (ESS). I’ll have a little more on them later, but let’s get back to the main buy this time around.

Putting the Bucks in Starbucks

As a result, the company has had to raise its prices several times to cover its costs.

Nevertheless, millions upon millions of loyal customers keep flocking to its nearly 35,000 locations around the world, willing to spend $5 or more for their cup o’ joe (not to mention iced drinks, sandwiches, sweets and other products).

During its May 3 earnings call, Starbucks showed off the strength of its brand.

Despite the numerous headwinds it faces, the company posted a record second quarter for revenues. It also had outstanding comparable-store sales, decent earnings and tremendous growth to its loyalty program.

In addition to inflation — which has led to higher costs for coffee beans, transportation and labor — Starbucks has been hurt this year by long, strict lockdowns in China due to COVID-19.

There are 5,654 stores in China, roughly 16% of the company’s portfolio, so the 23% decline in sales there damaged the bottom line — and the stock price. As poorly as the market has performed so far in 2022, SBUX has done even worse. 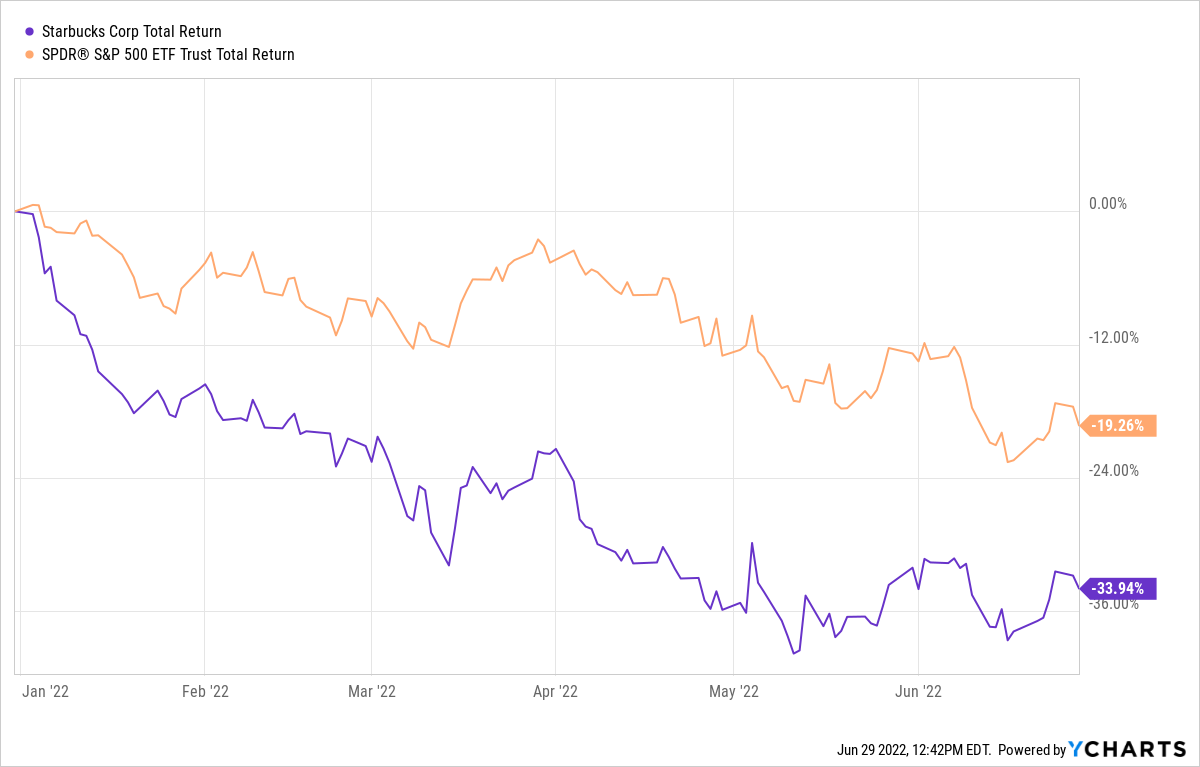 An investment in Starbucks now is a bet that China operations bounce back now that the most severe lockdowns have ended. It’s also a bet that the management team — led by long-time company guru Howard Schultz, who has returned to serve as interim CEO while the firm searches for a new man in charge — handles other challenges well going forward.

With so many uncertainties, the company has suspended guidance for the rest of the year, which Schultz correctly called “the only responsible course of action.”

Obviously, the lack of guidance only adds to the uncertainty that investors face, making what’s been a reliable growth stock for years seem a bit more like a speculative play.

Using the FAST Graphs forecasting tool, we see that after analysts expect full-year earnings to decline this fiscal year, they are projecting earnings to rise 20.7% in 2023 and 14.3% in 2024 (yellow highlighted area). 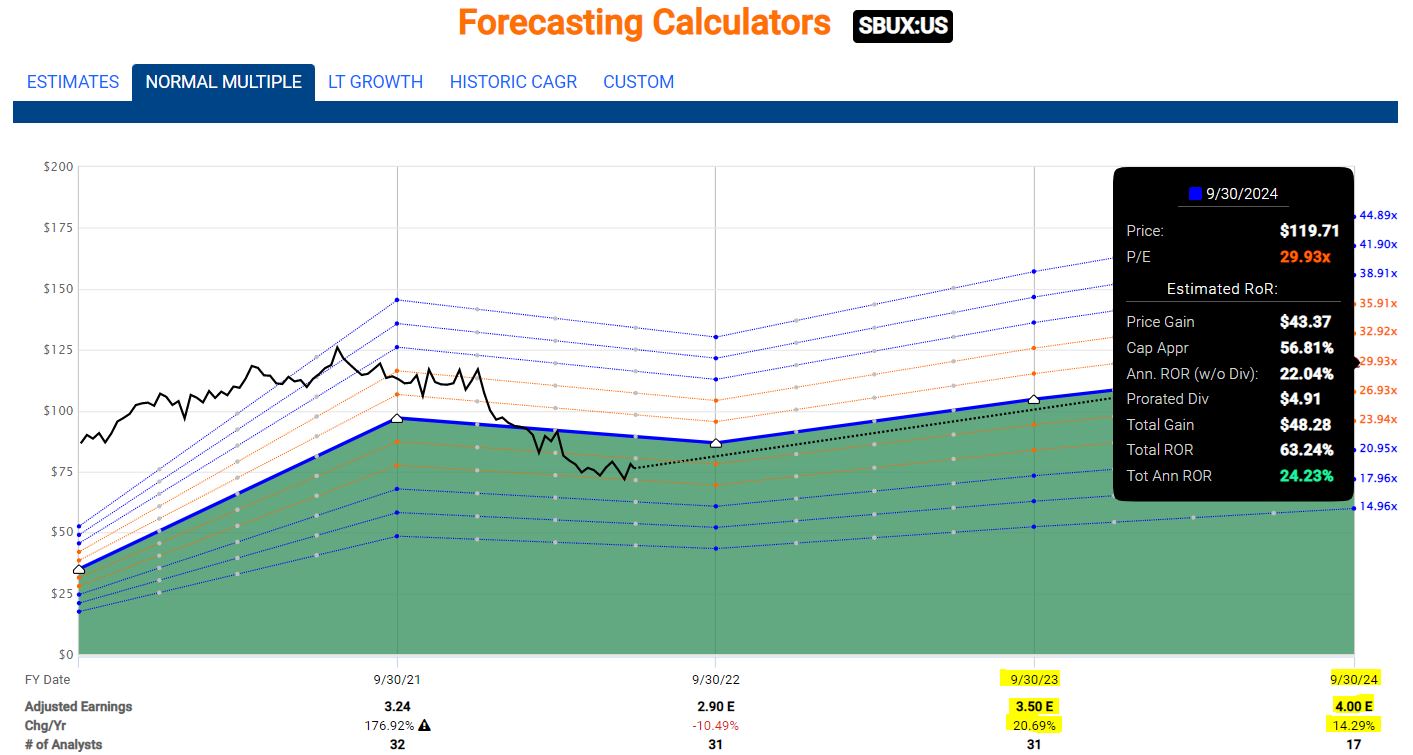 Looking at the black box at the right of the graph, we see that if Starbucks’ share price follows the last five years’ multiple of about 30x earnings, the total annual rate of return through fiscal year 2024 would be a very nice 24%.

One could argue that these are all just guesses, but can’t the same be said about any analyst’s look at any company? It’s why we use a variety of data to make investing decisions.

Citing “meaningful omicron-induced pressure in China (driving operating deleverage), an acceleration in near-term investments in employee wages and benefits, and more onerous-than-expected inflation in the firm’s commodity cost basket,” Morningstar recently lowered its fair value estimate on SBUX from $106 to $100. The reduced figure still suggests that the stock is trading at a 24% discount. 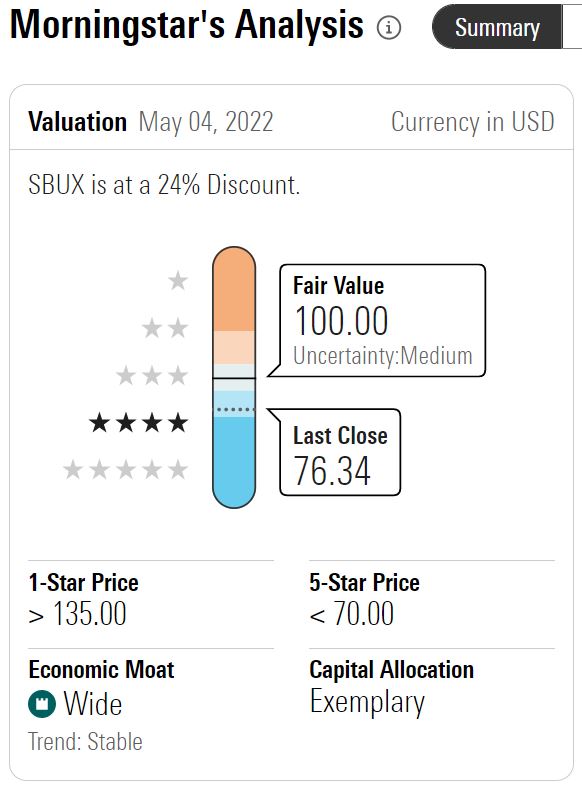 Value Line sees considerable upside for SBUX. The midpoint of its 18-month target price range is $106, and its analysts believe the stock could return more than 100% over the next 3-5 years. 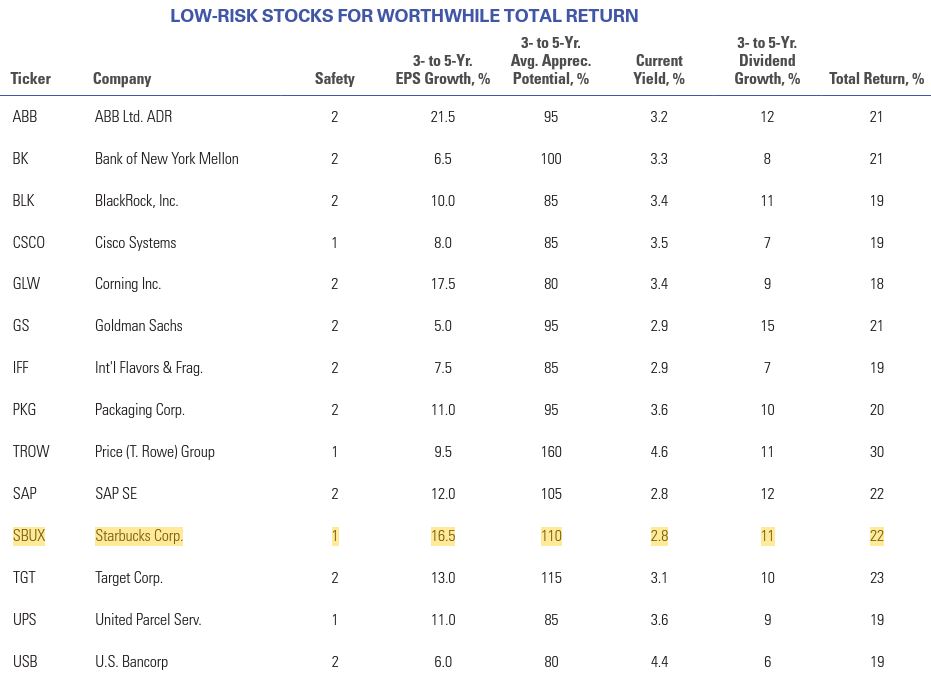 Here is some valuation information on not only Starbucks but also the other two companies whose shares we just bought, Essex Property Trust and Air Products & Chemicals:

*For valuation purposes, REITs use forward price/adjusted funds from operations (P/AFFO) rather than P/E.

Judging by those analysts’ views, all three stocks appear to be attractively valued. The ratios might seem a little high to get the “green means go” treatment, but historically it’s been a good time to buy each when the forward multiple is in the 20-21x range.

Starbucks has been growing its annual dividend quite aggressively for more than a decade. 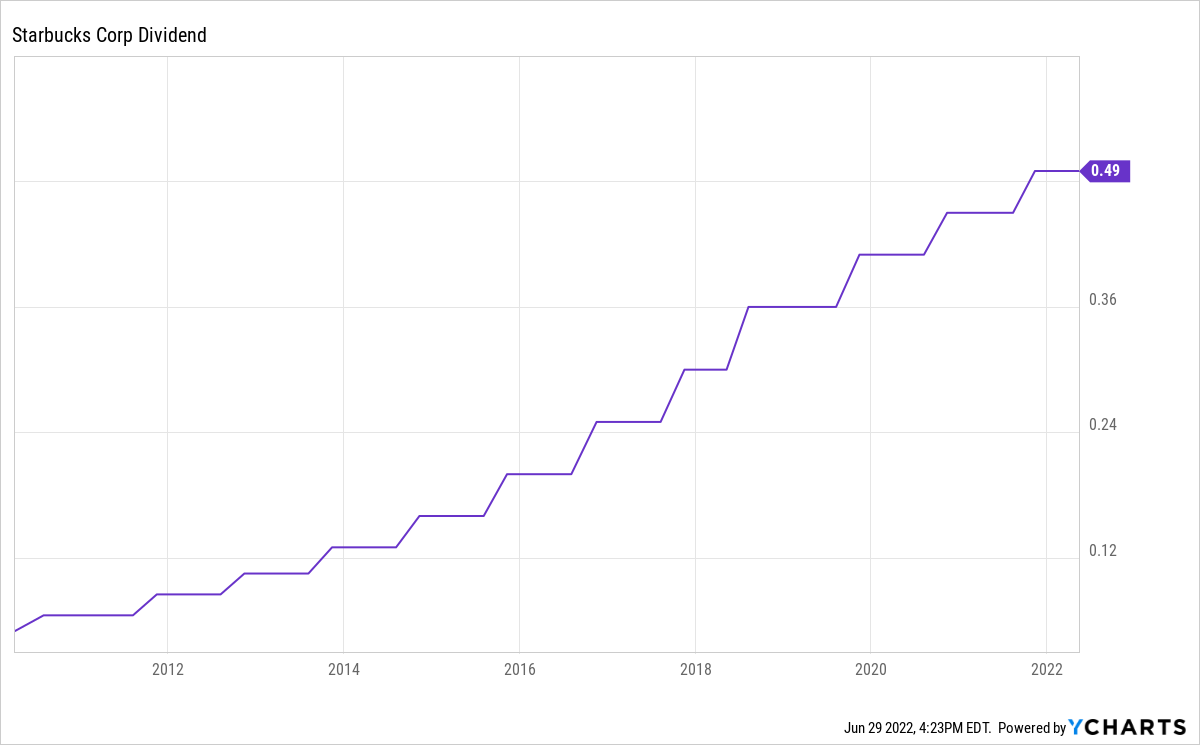 You know a company has been great dividend grower when many investors were disappointed that SBUX “only” gave them an 8.9% raise for this fiscal year. It will be interesting to see if the company returns to its double-digit-percentage-increase ways this fall.

This 7-share purchase of Starbucks, along with the additional share each of Essex and Air Products, added $29 to the IBP’s  expected income stream for the upcoming year. The full positions of SBUX, ESS and APD are now projected to generate about $190 in income — roughly 5% of the portfolio’s $3,826 total.

Here is some dividend-related data on all three companies, courtesy of Simply Safe Dividends.

Simply Safe Dividends determines valuation in part by looking at the relationship between a stock’s current yield and its 5-year average yield. Using that metric (last column of above graphic), all three companies appear to be undervalued.

Earlier in the article, I used a YCharts image to show how the price of SBUX has stumbled in 2022. But don’t let these recent doldrums fool you into thinking the stock has been a long-time underachiever.

Over most stretches going into this year, Starbucks was a clear winner. And since the market bottomed out during the Great Recession, SBUX has absolutely crushed the S&P 500 Index. 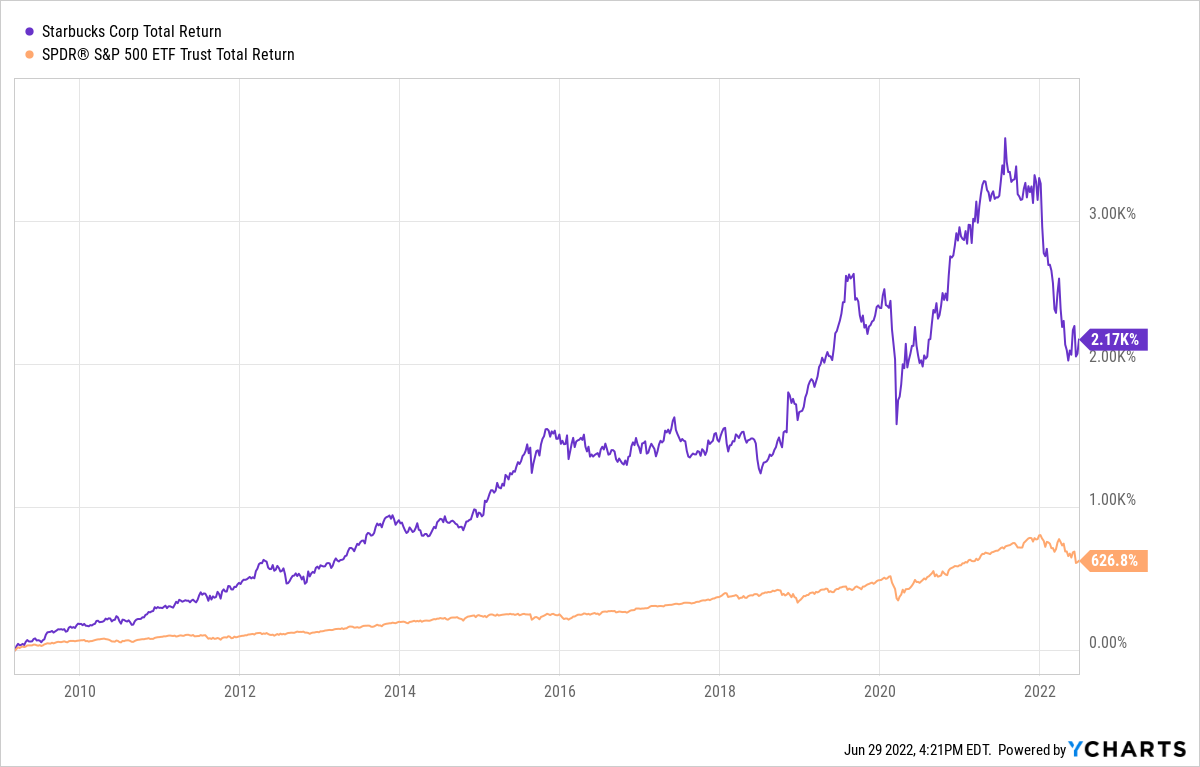 Long-term investors — as well as happy customers, like those who lined up at that Kentucky store — aren’t the only ones who consider Starbucks to be a high-quality operation.

Analysts who rate such things agree that SBUX is a financially strong company with significant competitive advantages (aka, a wide moat), as the following “quality table” illustrates:

There obviously is no guarantee the stock’s price will ascend again in the near term. Casting my gaze several years ahead, however, I feel good about owning a rather large SBUX stake in my personal portfolio and about adding to the Income Builder Portfolio’s position.

Also, for more on Air Products & Chemicals, see the article I wrote in December — HERE.

For more on Essex Property Trust, take a look at my investment thesis from two years ago — HERE.

And to see all 48 positions, as well as links to all IBP-related articles I’ve written over the last 4 1/2 years, check out the home page — HERE.