As a Dividend Growth investor, I can get frustrated and disappointed when, year after year, a company in my stock portfolio doesn’t raise its dividend.

That was just the case for me with CVS Health (CVS), a health-care conglomerate that oversees thousands of retail stores and pharmacies, sells health insurance, runs medical clinics, and also is a pharmacy benefits manager.

I’ve owned shares of CVS in my personal portfolio since 2016, originally buying it partly because of its excellent history of double-digit-percentage dividend growth … only to then watch it freeze its payout for 5 full years, starting in 2017 and continuing through 2021.

Quarter after quarter, the dividend announcement would come, and it would always be the same: 50 cents per share. It was as if I were living through Dividend Groundhog Day. 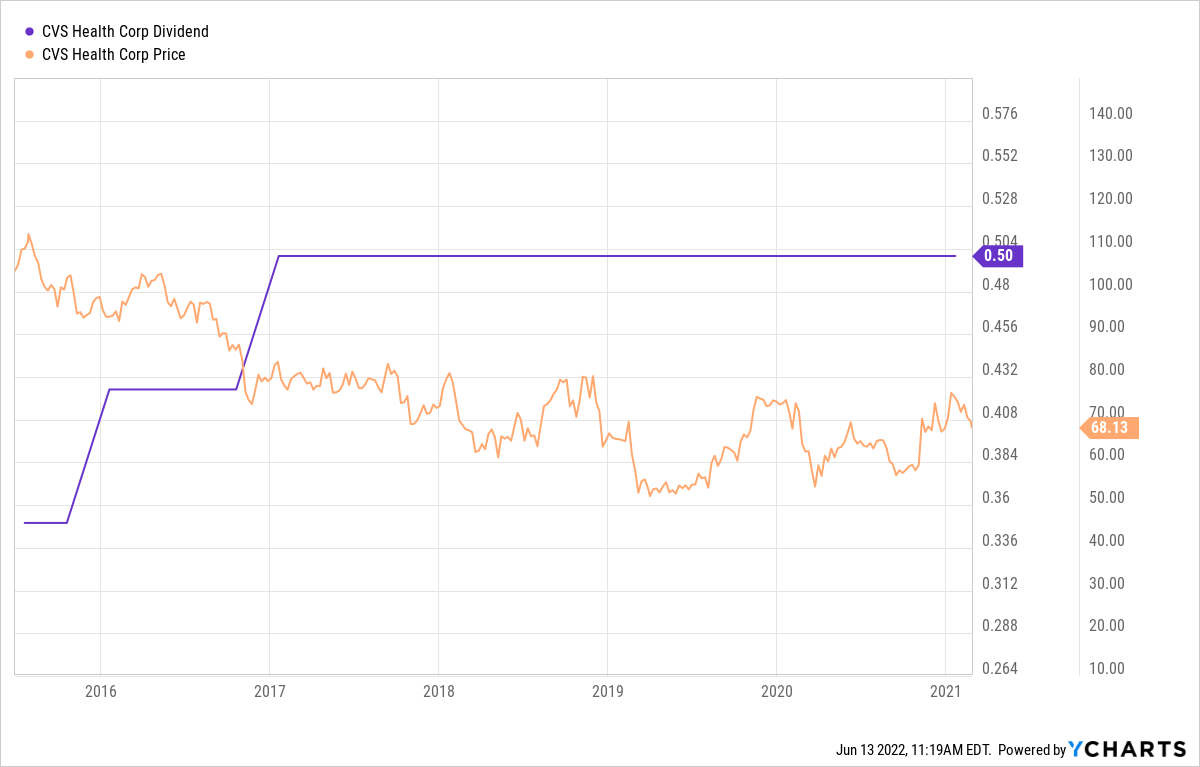 Adding injury to insult, the stock was a laggard, as the company struggled to convince potential investors that it would succeed in its transition from drug-store chain to health conglomerate.

We DGI folks might not love hearing this, but sometimes a company has a sound reason to deny shareholders a raise. Often, it’s because the company is carrying too much debt after a major acquisition or two, and it prioritizes using excess cash to get its balance sheet in order over increasing the dividend.

CVS bought Target’s (TGT) pharmacy and clinic business in 2015 and followed that two years later with its blockbuster acquisition of Aetna — a $69 billion deal that made CVS one of the country’s largest health insurers.

It also made the company’s debt load swell to uncomfortable heights, hence the dividend freeze. 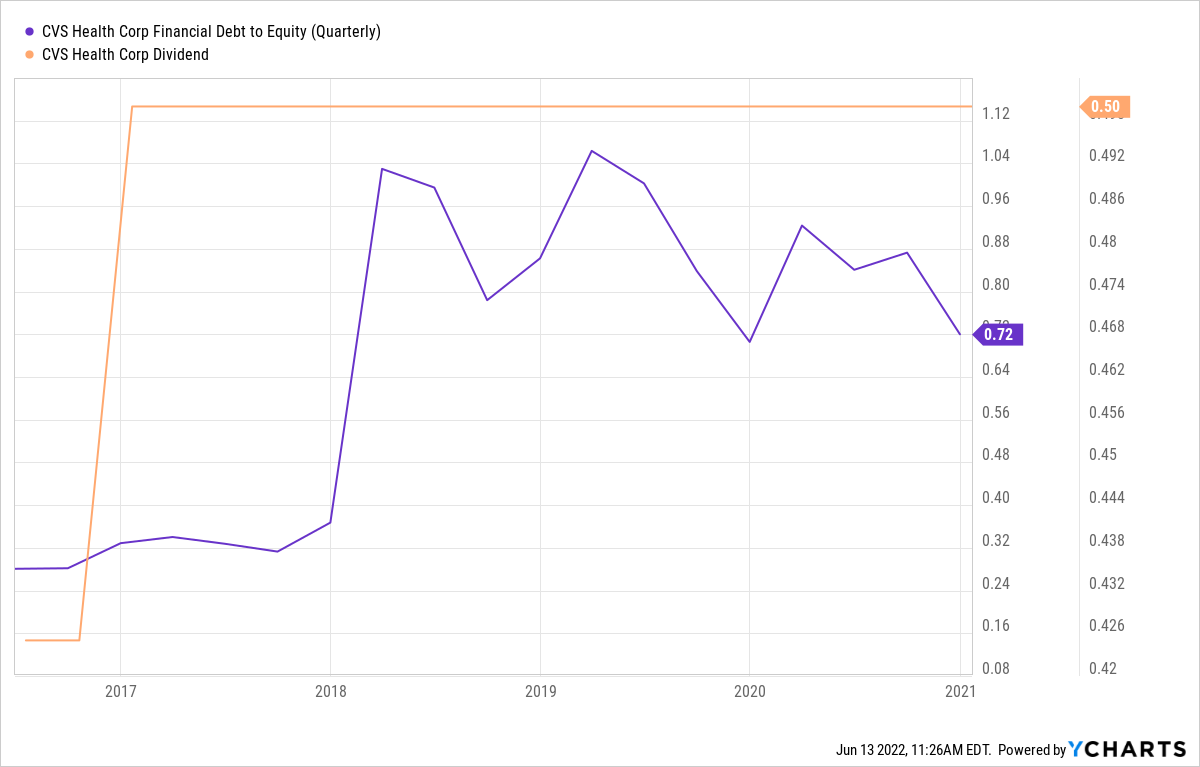 CVS management indicated that once the company paid off a significant amount of its debt and the new, larger business was operating more efficiently, the dividend could start growing again.

And that’s exactly what happened, as its net debt to EBITDA ratio returned to where it was before the Aetna acquisition and was set to fall even more.

With all this in mind, I decided it was time to add to the Income Builder Portfolio’s stake in this outstanding and growing business. And on Monday, June 13, I executed a purchase order for another 6 shares of CVS Health on behalf of this site’s co-founder (and IBP money man), Greg Patrick.

As can happen with limit orders, the CVS and GLW buys each executed in 2 transactions moments apart.

With the stock market continuing its downward trajectory, I also chose to use the rest of Greg’s $1,000 semi-monthly allocation to add to one of the IBP’s newest positions — display and optical technology company Corning (GLW) — as well as to buy another share of Automatic Data Processing (ADP), a global provider of human capital management and business outsourcing services.

I figured that if we liked Corning at $35.50 just last month, we should love it at $31.75. I’ve also been wanting to build up our relatively small ADP position; we last added to it in January.

I’ll have a little more about Corning and ADP in a bit. Now let’s get back to CVS Health.

So Far, So Good

While I’ve personally owned CVS stock for 6 years now, we initiated our position for the IBP only about a year ago. Nothing has changed fundamentally since then, so rather than repeat myself, I recommend that those interested in specifics about the business model check out the article I wrote before that purchase — HERE.

So far, CVS has been a market-crushing position for the Income Builder Portfolio. Starting with that first and largest buy back on June 21, 2021, each of the three stock purchases we’ve made has experienced superior total return to what would have been the case had we put the exact same amount of money into the SPDR S&P 500 Trust ETF (SPY).

Even the purchase we made about two months ago, which was down more than 9% through June 10, outperformed SPY, a common proxy for the overall market.

For years, handily beating the market was what CVS did; in the decade-plus leading into mid-2016, the company experienced total return four times that of the index. 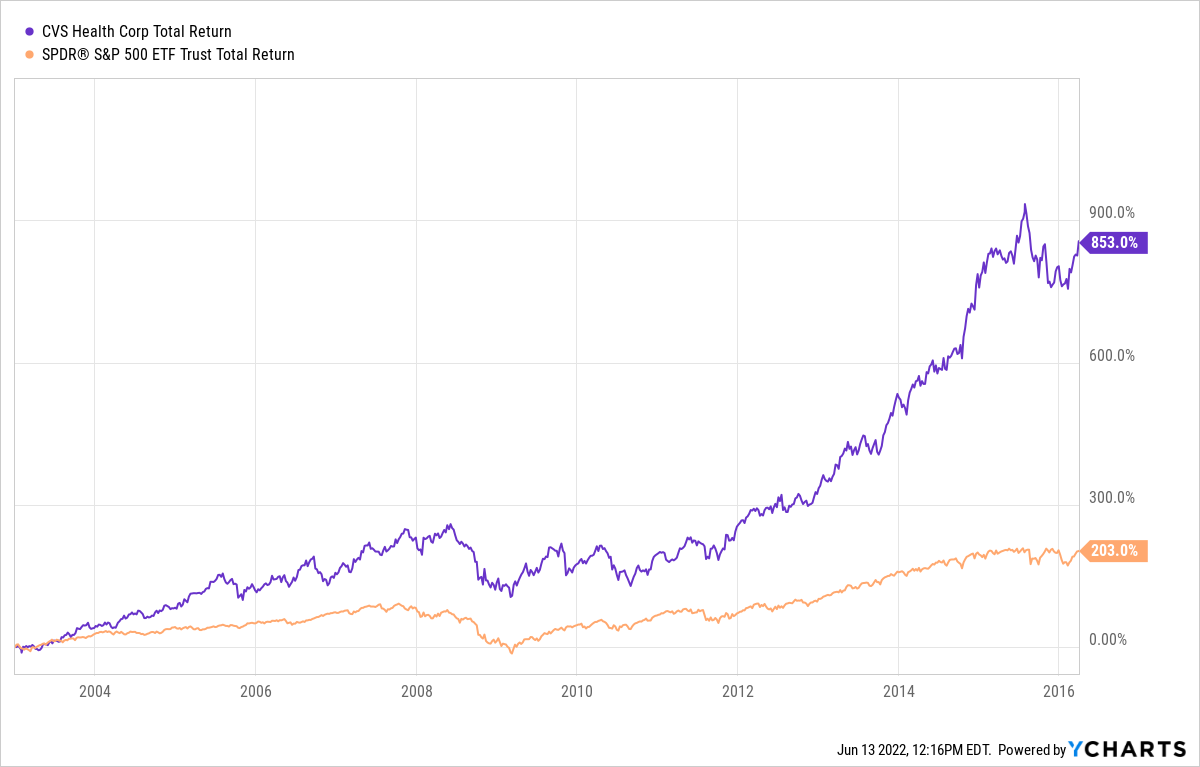 But as debt grew, as people worried about the stores’ ability to compete with Amazon (AMZN) and other online retailers, and as investors became concerned that CVS management might be getting involved in too many industries, the stock price was punished.

Now, however, CVS is executing its plan. A series of very good earnings reports has allayed most fears, and investors like what they are seeing.

In the first-quarter 2022 presentation on May 4, results were impressive and full-year guidance was applauded. 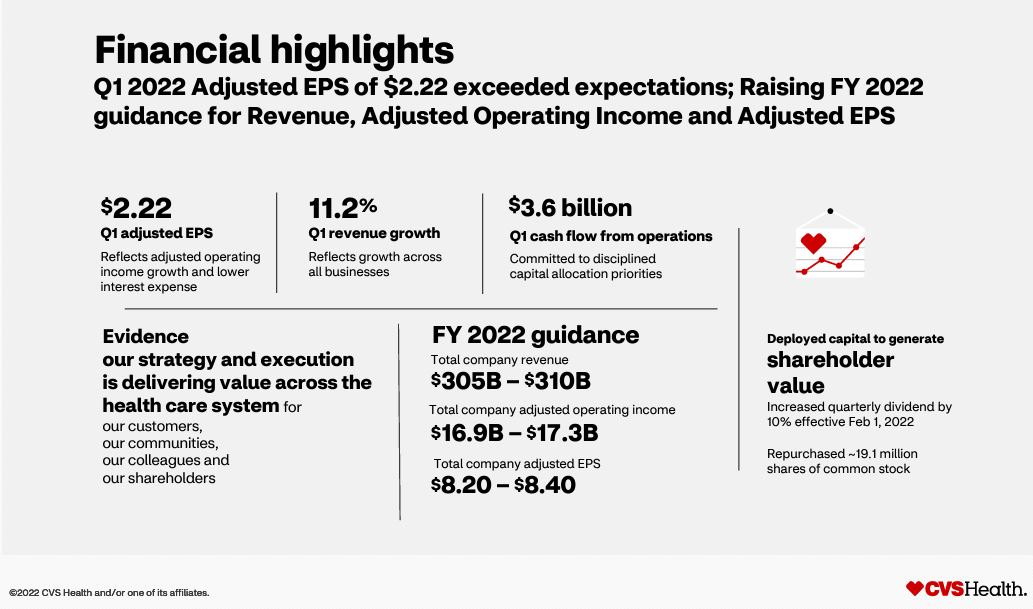 To get an idea of the financial health of CVS Health, one need only look at the “financial sonar” from Jefferson Research, which gives the company “strongest” and “strong” scores in every fundamental category. 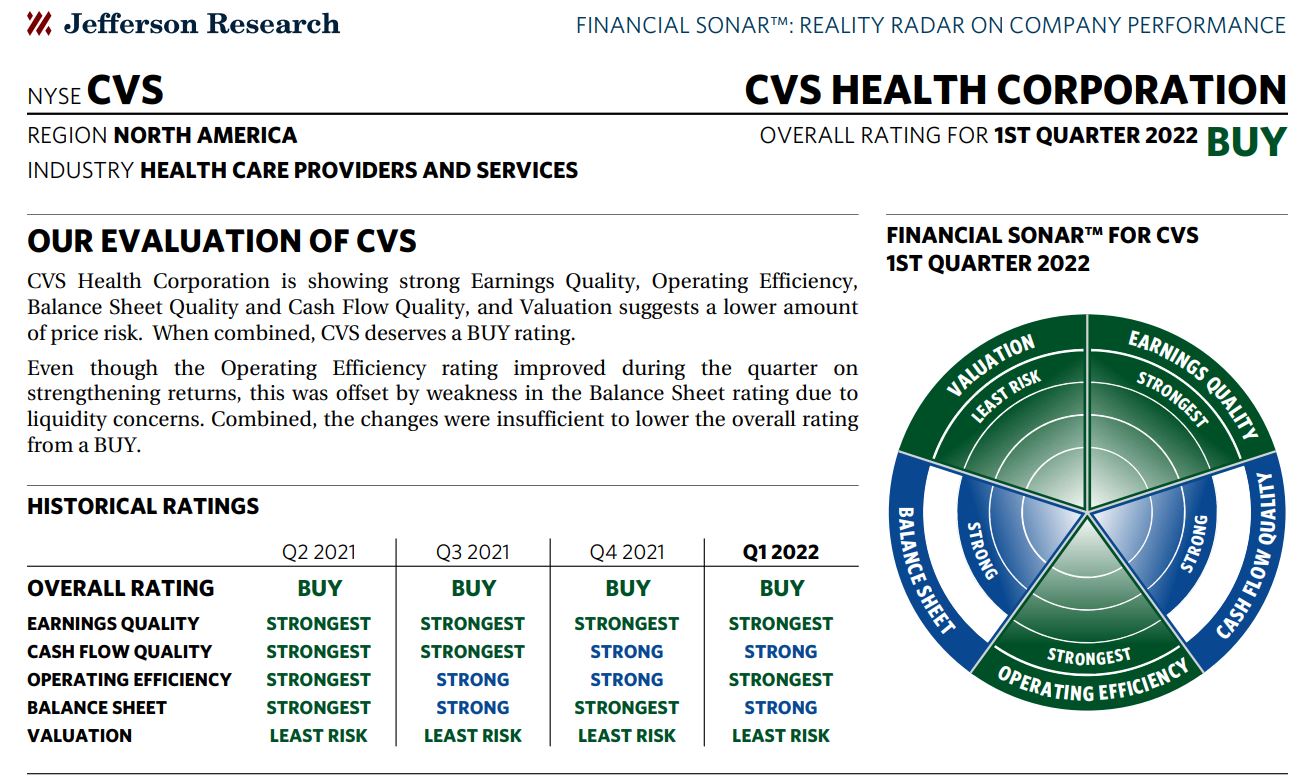 Standard & Poor’s raised CVS Health’s credit rating from the minimum investment-grade level (BBB-) to BBB a little while back. And last year, the ratings agency lifted the company’s outlook to “Positive” from “Stable,” indicating a bump to BBB+ could be in the offing.

It’s part of the company’s improved quality across the board, as CVS has earned solid grades from various ratings and analytical services. The following table also includes quality-related scores for Monday’s other IBP buys, Automatic Data and Corning.

I circled the Simply Safe Dividends “dividend safety” score in the table above because it helps illustrate how far CVS has come. Only a few months ago, the score was in the 60s, near the low end of the “safe” range. Now at 90, it’s right in the middle of the “very safe” range — meaning a cut is highly unlikely. 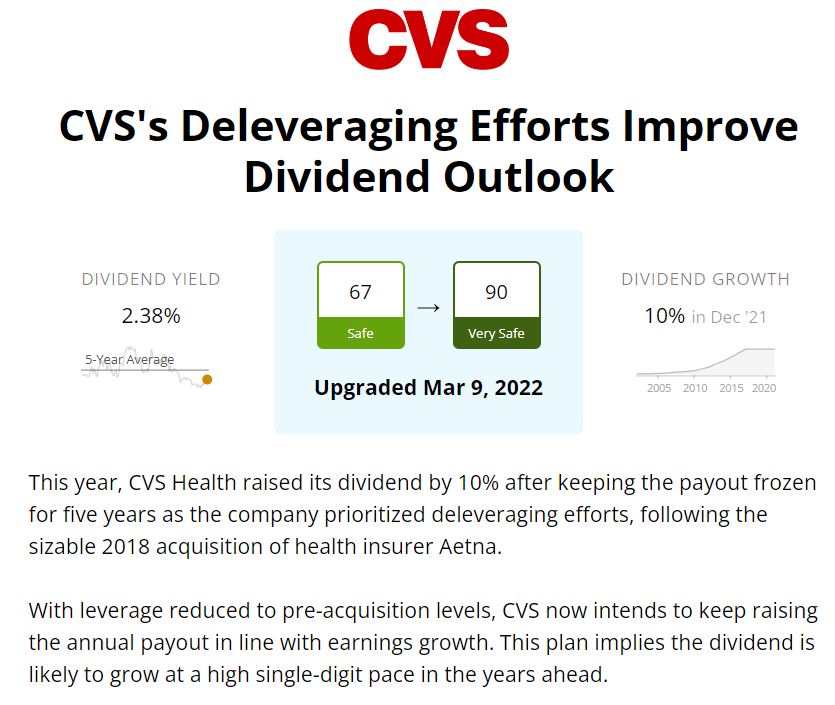 The DGI guy in me likes that CVS Health’s yield is approaching 2.5%, and loves the forecast of future dividend raises.

Monday’s buys of CVS, ADP and GLW added $26 to the IBP’s projected annual income stream. The positions are now expected to combine to generate around $139 in income over the next year, about 3.7% of the portfolio’s $3,789 total.

Even though CVS is no longer the screaming buy it had been when it was truly unloved by the market, most analysts still consider it to be fairly valued or even undervalued.

The Verus Opinion, which covers more than 4,500 companies and rates only about 20% of those as “buys,” calls CVS a buy. And Refinitiv’s I/B/E/S Mean, which compiles analyst ratings, shows that 20 of 29 consider the stock to be either a buy or strong buy. 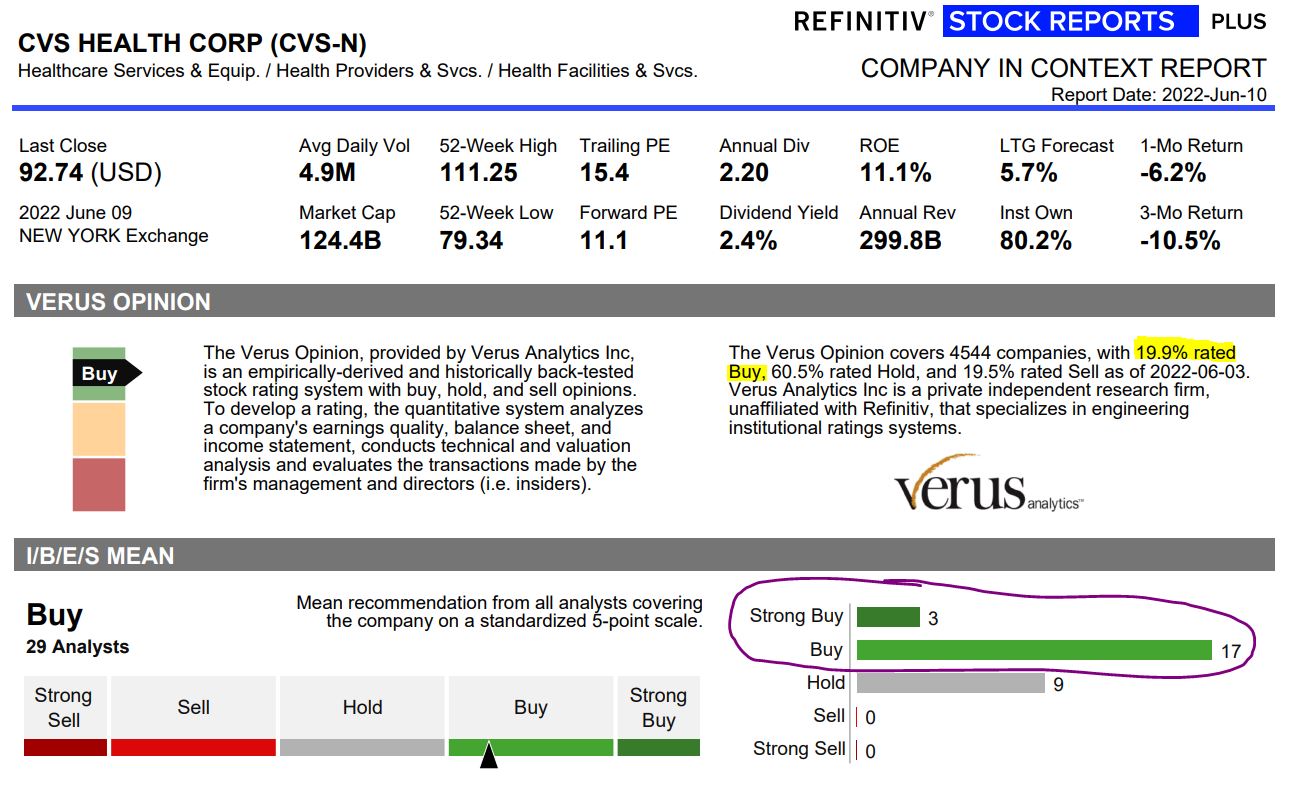 The mean target price from those analysts is $117, suggesting a 26% upside.

It’s a similar story at another analyst-compilation service, TipRanks, with 11 analysts monitored arriving at an average target price of about $117. 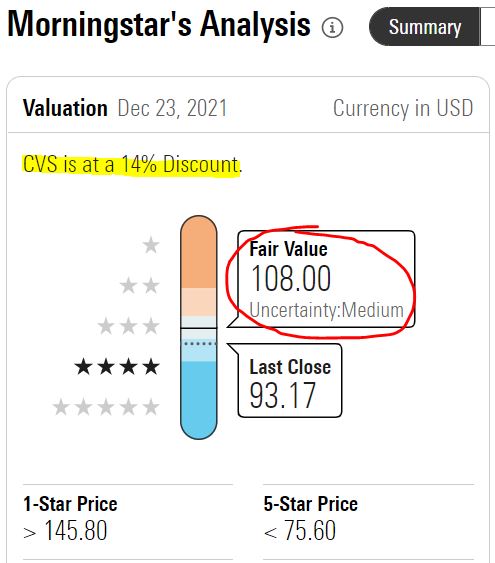 With dividends growing again and with its belief that the stock price could almost double in the next 3-5 years, Value Line has included CVS Health in its model portfolio of “Stocks for Income and Potential Price Appreciation.”

Credit Suisse expects CVS to keep outperforming the market in the coming year, and it has established a $120 price target.

Argus analyst Christopher Graja is very bullish on CVS due to the company’s earnings and revenue guidance, as well as its share buyback program. He raised the target price to $125.

A look at FAST Graphs shows CVS to be trading at a discount to its normal P/E ratio of the last 10 years — as indicated not only by the data I circled, but also by the way the end of the black price line sits well below the blue normal-valuation line.

And because investing is largely about using probabilities to make a call on a company’s future prospects, I like to employ FAST Graphs’ forecasting tools. The following image shows that if CVS Health’s valuation over the next few years follows its decade-long norm, it will result in a very nice 16.66% annual rate of return through the end of 2024. 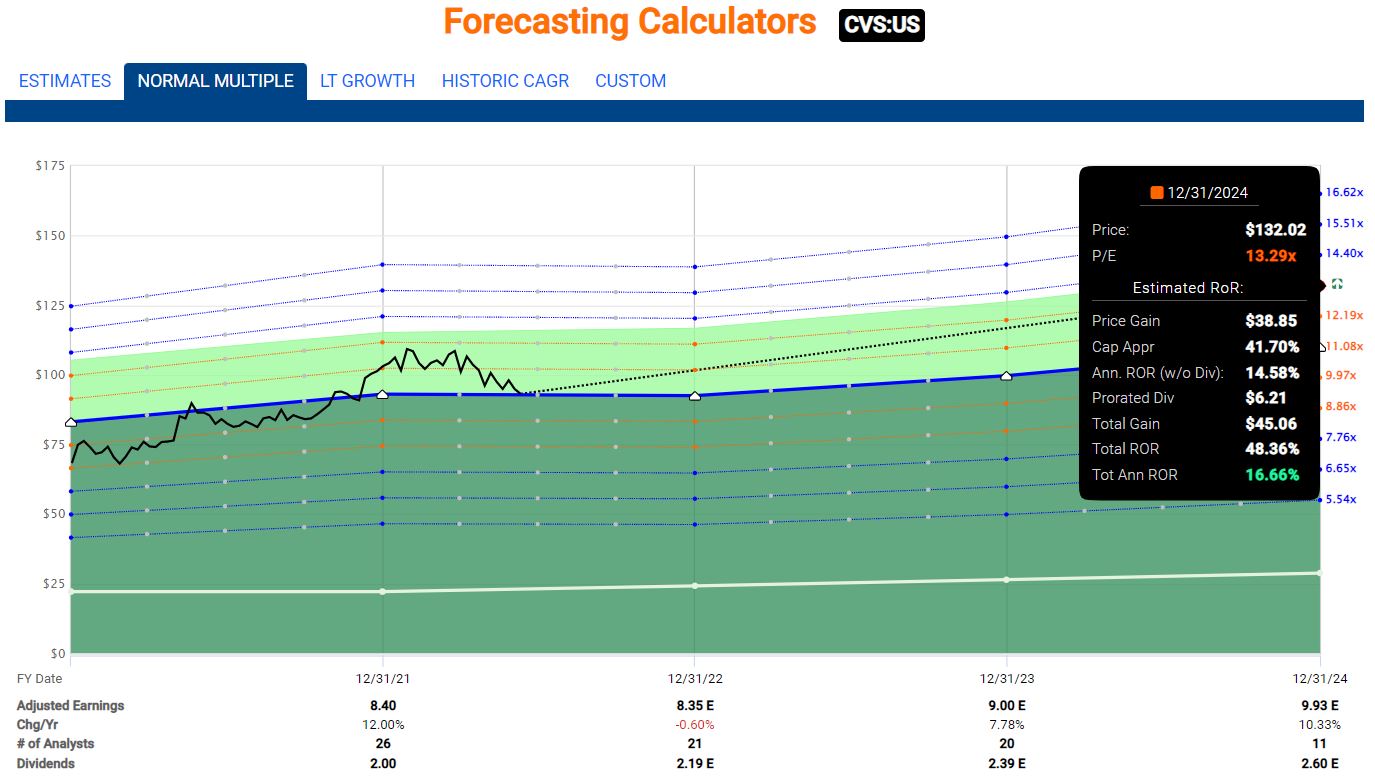 Here is an overview of valuation data, not only for CVS but for the other two companies whose shares we added Monday:

Each appears to be attractively valued right now … although I certainly understand that the continued downward direction of the overall market might make an investor want to wait for better margins of safety on these and other stocks.

For many who use the Dividend Growth Investing strategy, a dividend freeze means it’s time to sell. And it’s hard to blame them; after all, you can’t spell DGI without the “G”!

The IBP Business Plan lists several factors that could lead to selling a company, including if it “reduces, freezes, suspends or eliminates its dividend.” But the plan goes on to say:

Those are reasons to CONSIDER selling a company. There are no “automatic sell” triggers.

With both the IBP and my personal portfolio, I tend to be pretty patient, especially if the company isn’t reducing its dividend. If a business can maintain its payout even as it struggles in some other areas, I’ll ride it out if I think the long-term prognosis is good.

Additionally, I look at my portfolio as a whole, and as long as my holdings combine for healthy income growth year after year, I’m usually fairly content.

Having said that, I don’t know if I’d have waited another 5 years for CVS to give me an income raise … and I’m glad I didn’t have to find out!

The Income Builder Portfolio home page — HERE — includes information on all 48 holdings, as well as links to every IBP-related article I’ve written over the last 4 1/2 years.

I also manage another project for this site, the Growth & Income Portfolio. Check it out HERE.

As always, I strongly encourage every investor to conduct his or her own due diligence before buying any stock.