This week I shopped at my favorite retailer … and all I can say is that I’m glad I survived the rush.

The parking lot was packed with cars. Each line at the attached gas station (which offers the cheapest price in town) was 6-7 vehicles deep. 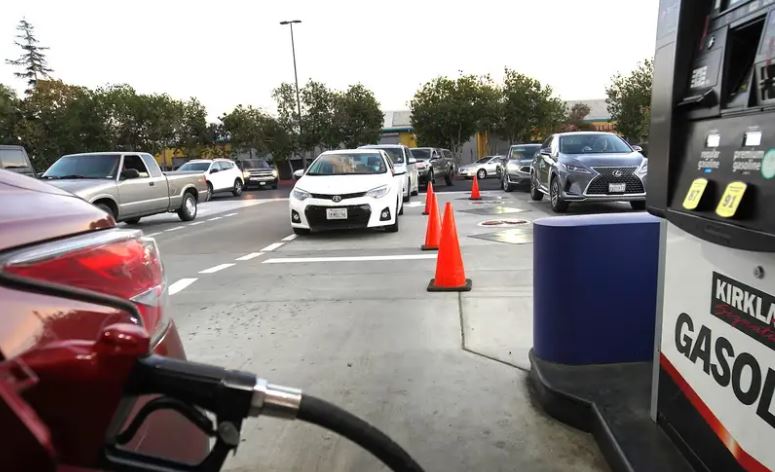 Inside, the store was teeming with fellow customers who were loading up their carts and flatbeds, and who occasionally were stopping to taste the many food samples being offered. Almost every cashier station was open, and each was several shoppers deep. There wasn’t an open table in the food court. 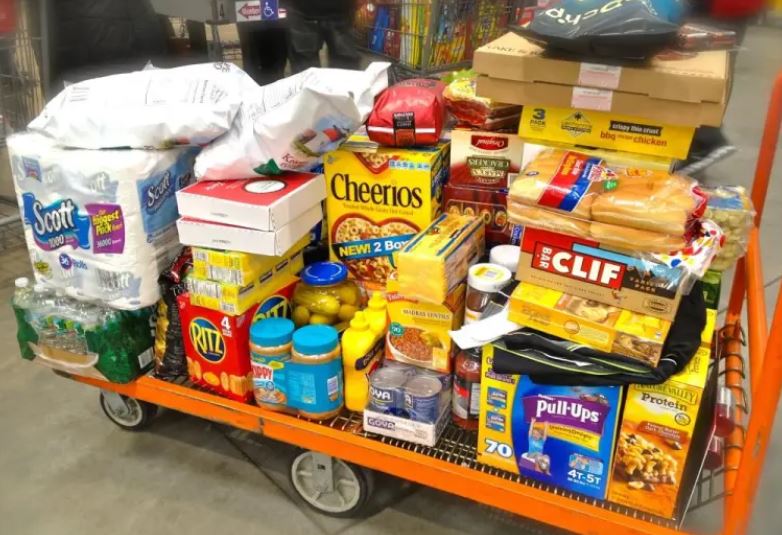 And there were people waiting in line to sign up for a membership or to renew their existing one – like me, these folks were willing to pay for the right just to spend their money at this store.

Oh, and here’s an important piece of information to help put all of the above in perspective: It was midday on a Tuesday. You should see my local Costco on a typical Saturday or Sunday!

Although what I’ve written so far was only an anecdote, it’s a snapshot into why Costco (COST) stock has been such a reliably market-beating investment over the years. 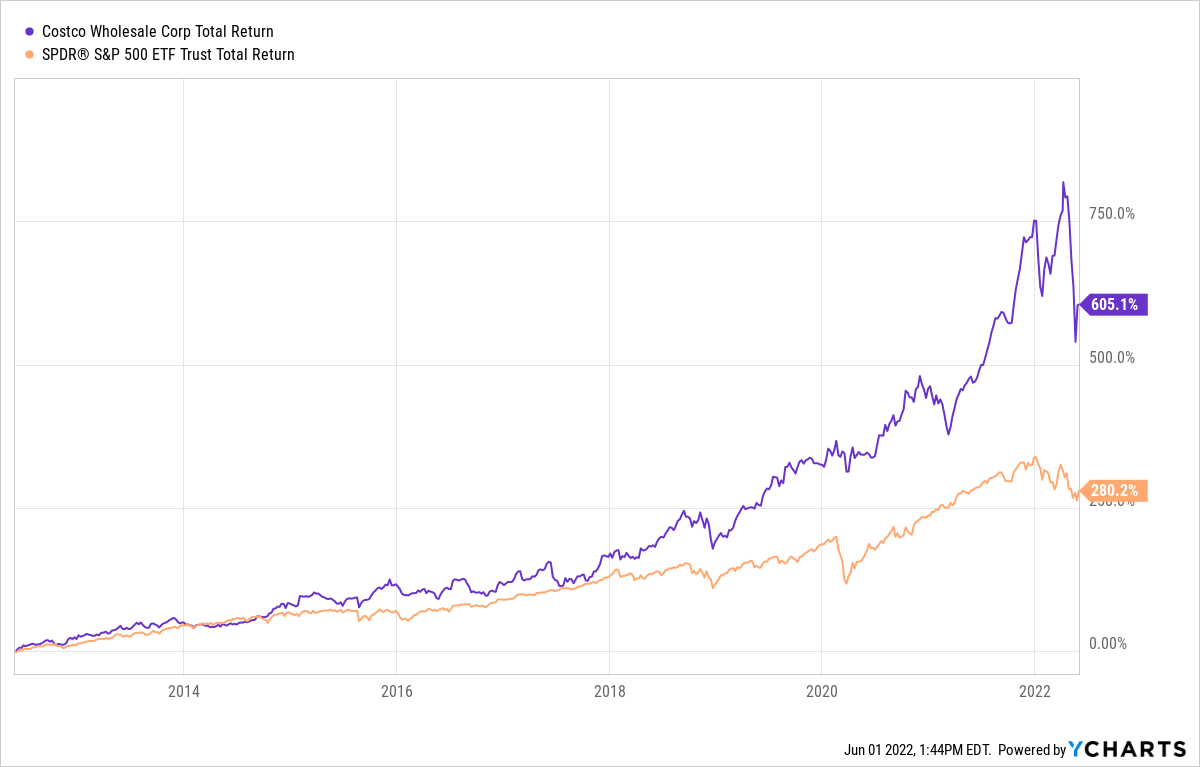 Costco’s continued out-performance as a business and its improved (albeit still high) valuation made me decide that we should add another share of COST to our Income Builder Portfolio.

So on Wednesday, June 1, I executed a purchase order on behalf of this site’s co-founder (and IBP money man), Greg Patrick.

As you can see, I used the rest of Greg’s semi-monthly allocation to add a share apiece to our existing positions in Essex Property Trust (ESS) and Snap-on (SNA). (Even though the buys were made on the first day of June, this actually represented our second May buy.)

I’ll say a little about Essex and Snap-on in a bit, but this article is mostly about the company with the best business model in all of retail.

On May 17 and 18, Costco’s main big-box competitors, Walmart (WMT) and Target (TGT), had disappointing quarterly earnings reports that sent prices of their shares plummeting.

They blamed inflation and other macro issues for their woes, and many other retailers — including Costco — were punished in the days that followed, too. 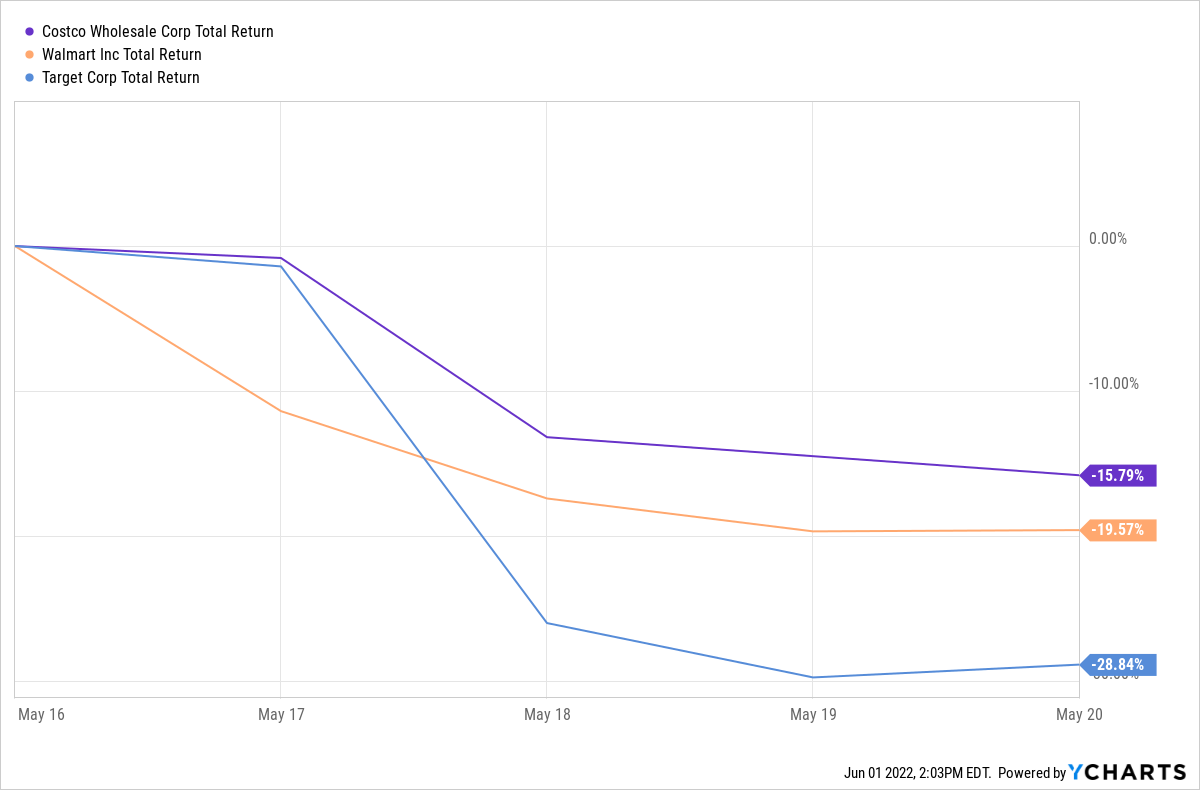 COST already had been falling since its price reached an all-time high of $612/share in early April, with inflation, an overall market correction, and overvaluation seen as the main culprits.

With much of retail in a free-fall, I took advantage and added to the Costco position in my personal portfolio as its price dipped below $425.

I didn’t go hog wild, though, because Costco was due to report its third-quarter earnings after market close on May 26, and I didn’t want to buy a bunch of it only to watch it crash if it disappointed the way Target and Walmart had.

As it turns out, Costco did what it usually does. It had another outstanding quarter, beating expectations and growing both overall sales and comparable-store sales. 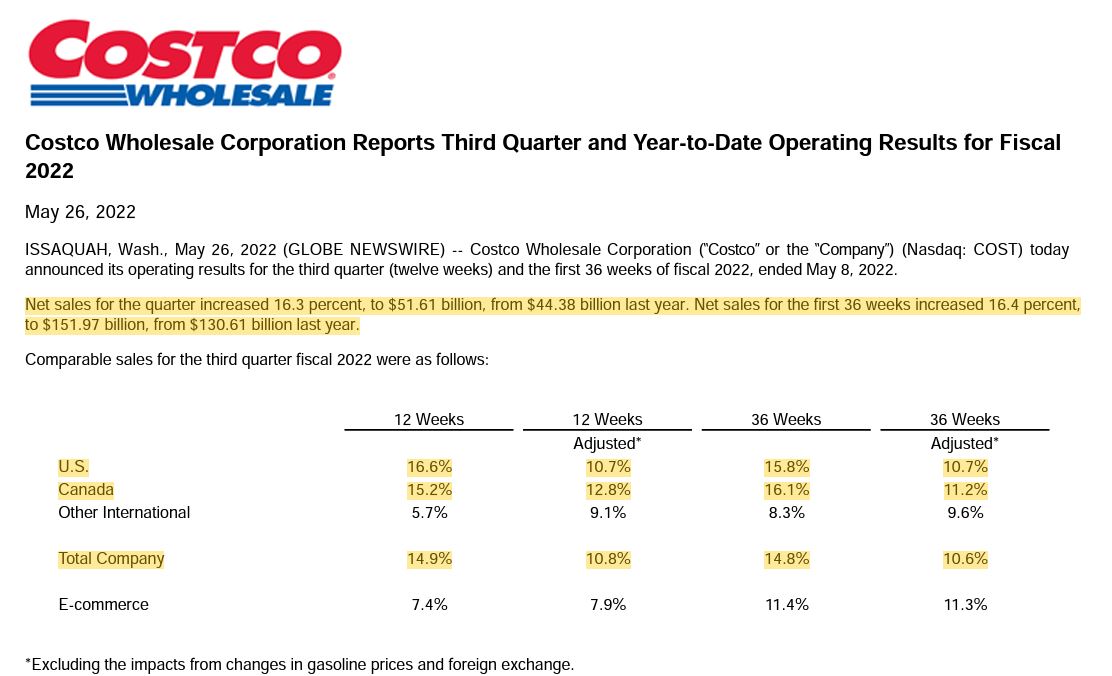 Nothing new there. The following graphic shows the growth of Costco’s earnings per share and sales over the last decade.

The stock price already had started moving up earlier in the week as the overall market was staging a minor comeback. And COST went higher still after its report, finishing May with a 12% gain from the low it hit after the WMT-TGT shock.

In addition to its outstanding income and revenue numbers, Costco brought in $984 million in membership fees in the quarter (vs. $901 million in Q3 2021). And senior vice president Bob Nelson had more great news on the earnings call about membership renewals:

In terms of renewal rates, we hit all-time highs. At Q3 end, our US and Canada renewal rate was 92.3%, up 0.3% from the 12 weeks earlier at Q2 end. And the worldwide rate came in at 90% for the first time in company history, and that’s up 0.4% from what we reported at Q2 end. Renewal rates continue to benefit from the increased penetration of both auto renewals and more executive members. And in addition to that, higher first-year member renewal rates than what we have historically seen. …

We ended Q3 with 64.4 million paid households and 116.6 million cardholders, both of those up over 6%, compared to a year ago. At Q3 end, our paid executive memberships were 27.9 million, and that’s an increase of just about 800,000 during the 12 weeks since Q2 end. Executive members now represent over 43% of our member base and over 71% of our worldwide sales.

Only a couple of years ago, the company’s 90% renewal rate in North America was the envy of the industry. Now it’s up to 92%. Impressive. And even more people are signing up — and paying — for the right to shop at Costco’s stores and costco.com.

With inflation continuing to be a major concern, and with Costco viewed as a way to save on everything from food to gasoline to electronics and so much more, I don’t worry much about membership declining even when the company raises its annual rates again sometime in the next year.

As one might expect for such a well-run company, Costco gets great quality-related grades.

Costco has been growing its dividend for 18 years, increasing it by double-digit percentages every year except for during the pandemic in 2020, when it “only” raised the payout 9%. 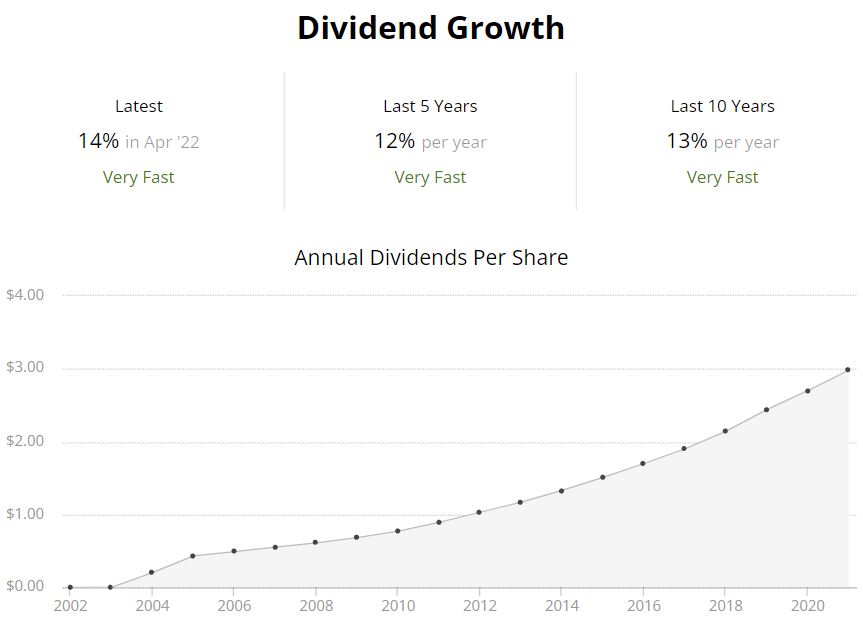 Most recently, it announced a 13.9% hike in April that resulted in a quarterly dividend of 90 cents per share.

Costco’s sub-1% yield keeps some Dividend Growth Investing practitioners away … but the stock has become kind of a stealth income play because it has been paying a special dividend every 2-3 years for the last decade. 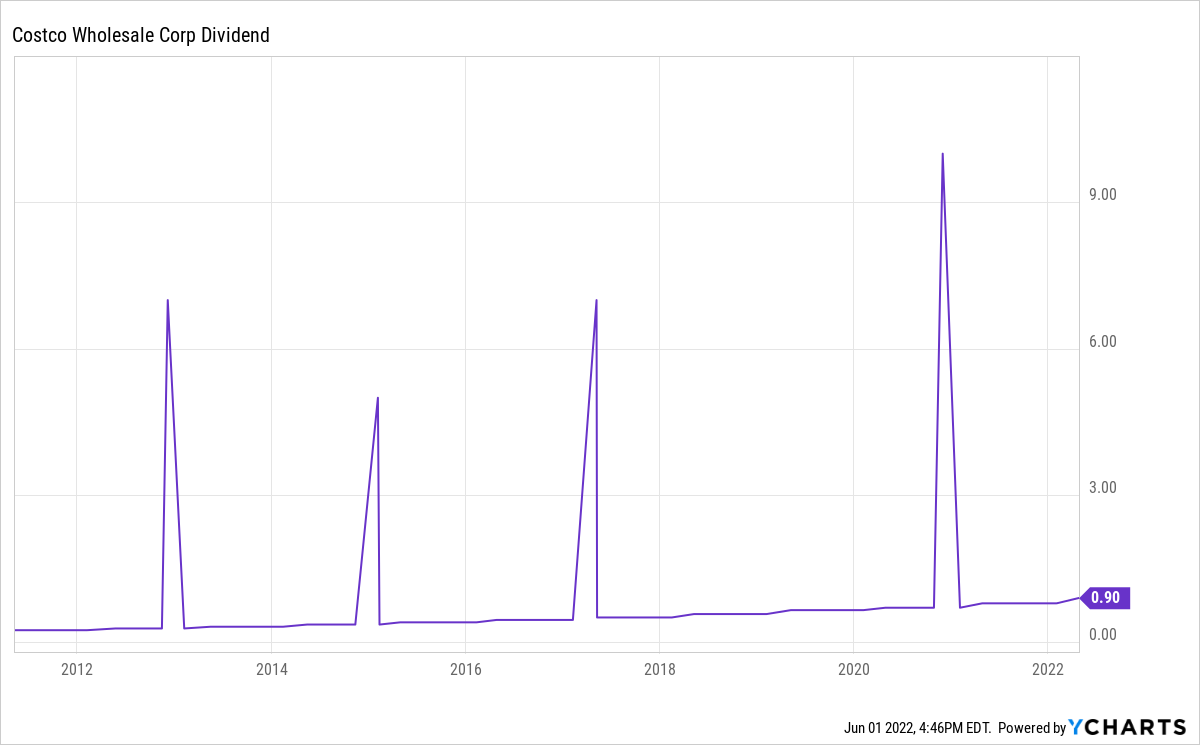 Of course, there is no guarantee that the company will continue the practice — that’s why they’re called “special” — but given the financial results, I’d be a little surprised if there isn’t another announced either late this year or sometime in 2023.

The two other stocks we bought for the Income Builder Portfolio during this purchase period, Essex Property Trust and Snap-on, also have long dividend-growth streaks. ESS is the rare real estate investment trust (or REIT) that is a Dividend Aristocrat, with 28 straight years of increases, and SNA has a 12-year run going.

Here is some other dividend-related information about the IBP’s three most recent buys:

Our June 1 purchases added about $18 in projected annual income to the portfolio, and these three positions now are expected to combine to produce around $118 in income over the next year — about 3% of the IBP’s $3,750 total.

To see all 48 stocks in the portfolio, as well as links to every IBP-related article I’ve written, go to our home page HERE.

Besides the low yield, another reason some DGI folks pass on COST is that it almost always appears to be overvalued.

Indeed, when we first acquired it for the IBP on March 22, 2021, I wrote that I understood why some investors might not be comfortable buying the stock because of its 33 forward P/E ratio.

Things obviously have worked out pretty well so far, however. COST almost doubled within a year, but even after the recent pullback, it still has crushed the S&P 500 Index since that purchase. 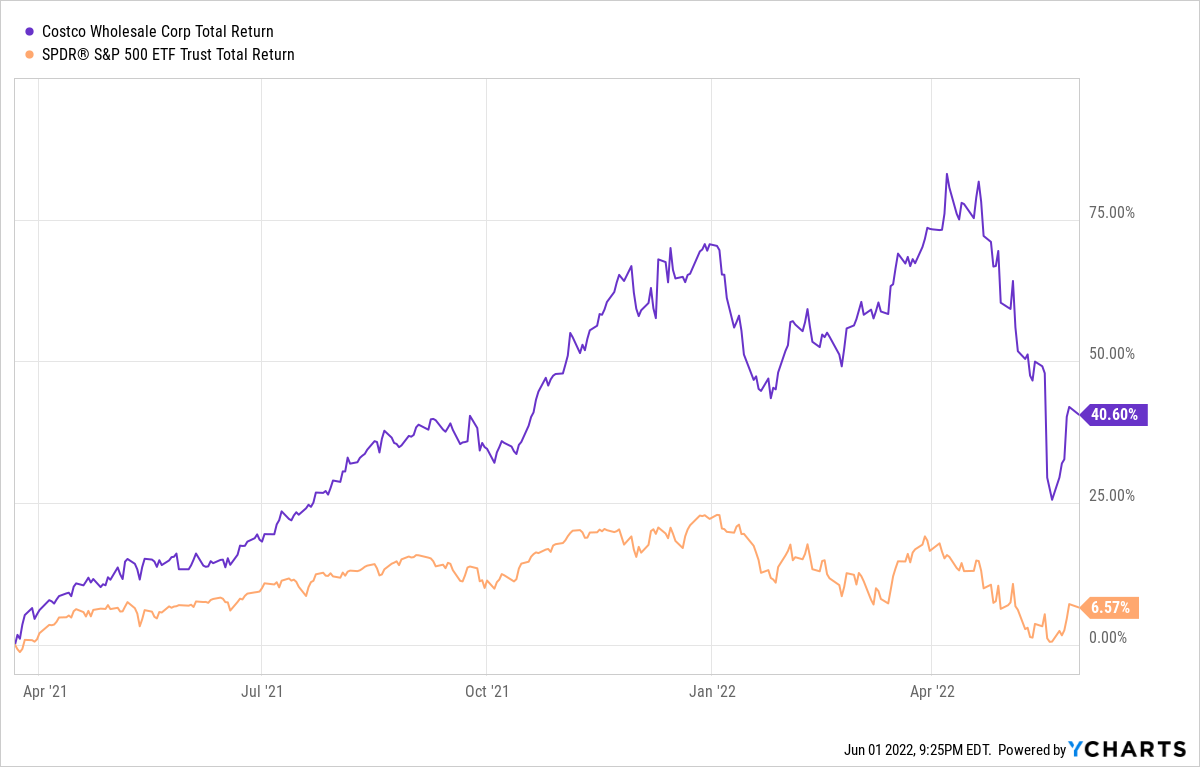 The P/E ratio remains elevated, though it actually is a fraction lower now than it was then. Morningstar and CFRA say it is fairly valued, and the analysts monitored by both TipRanks and Refinitiv are very bullish — with 16 of the 20 at TipRanks calling it a “buy,” and 23 out of the 37 at Refinitiv saying it’s a “strong buy” or “buy.”

The following table lists valuation information for Costco, as well as for Essex Property Trust and Snap-on.

*REITs use price/adjusted funds from operations (rather than price/earnings).

Essex, which acquires, develops, redevelops, and manages apartment properties in high-end West Coast markets, is another company that often is overvalued. Like COST, it has pulled back recently; as you can see in the table, most analysts are high on its chances of near-term price appreciation.

Morningstar says Snap-on is about 17% overvalued, but most other analysts consider the commercial toolmaker to be fairly valued to slightly undervalued.

With a total return of 5.7% since we first bought it last Nov. 8 (see the article HERE), it has far out-paced the overall market. 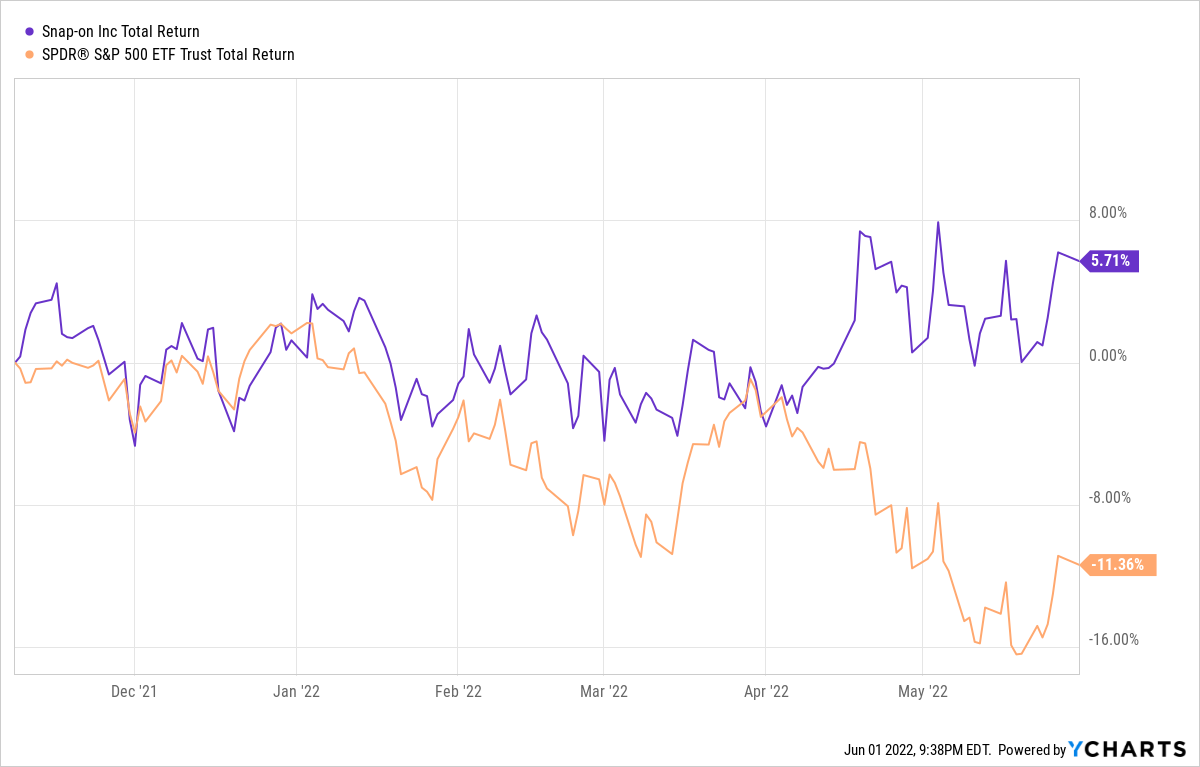 I like Costco so much, my friends joke that I’d live in one if I could.

And given that the company’s warehouses are stocked with beds, food, beverages, personal-care items, medications, televisions, computers, cellphones and everything else a person could need and want, any of us really could live in one for a long, long time.

As an investment, if one can get past the low yield (in non-special-dividend years) and the relatively high valuation, COST offers an incredibly attractive business model due to its loyal customer base and the fact that the company makes billions of dollars annually in membership fees. 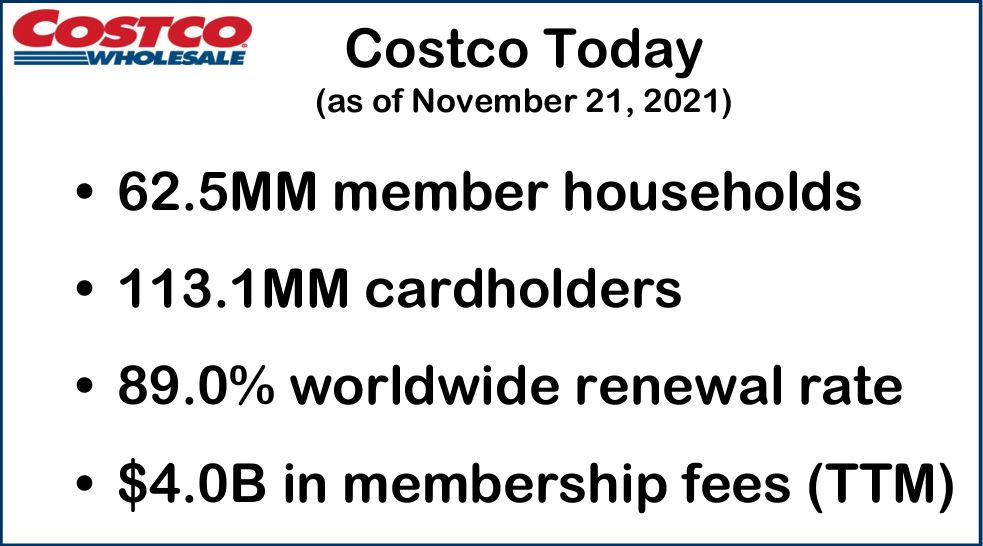 I’m always looking for an opportunity to add more COST to my personal portfolio and to the IBP, so I view this recent pullback as a good thing. Having said that, I’d still understand if value-conscious investors continue to find it too pricey.

Costco also has been one of the best performers in the other real-money project I manage for this site, the Growth & Income Portfolio. Check it out HERE.