The spring earnings season got real in April’s final week, as some of the biggest names in the investing world either reported disappointing quarterly results, delivered soft outlooks, or both.

For example, even though Apple (AAPL) had another outstanding quarter, its share price fell almost 4% on Friday, April 29 — one day after CEO Tim Cook cautioned that his company was “not immune” to headwinds such as Russia’s war against Ukraine, semiconductor shortages, inflation and Covid-related disruptions in China.

A rare earnings miss for Alphabet (GOOGL), announced after market close Tuesday, resulted in its price getting clipped nearly 4% the next day.

But the week’s biggest earnings newsmaker was Amazon (AMZN), which suffered a staggering 14% decline Friday after revenue projections for next quarter came in several billion dollars shy of analyst consensus.

Those reports, and many others, capped what turned out to be an awful April for Mr. Market, with the Nasdaq having its worst month since 2008 during the middle of the Great Recession, and the S&P 500 Index experiencing its biggest monthly decline since the 2020 pandemic plunge. 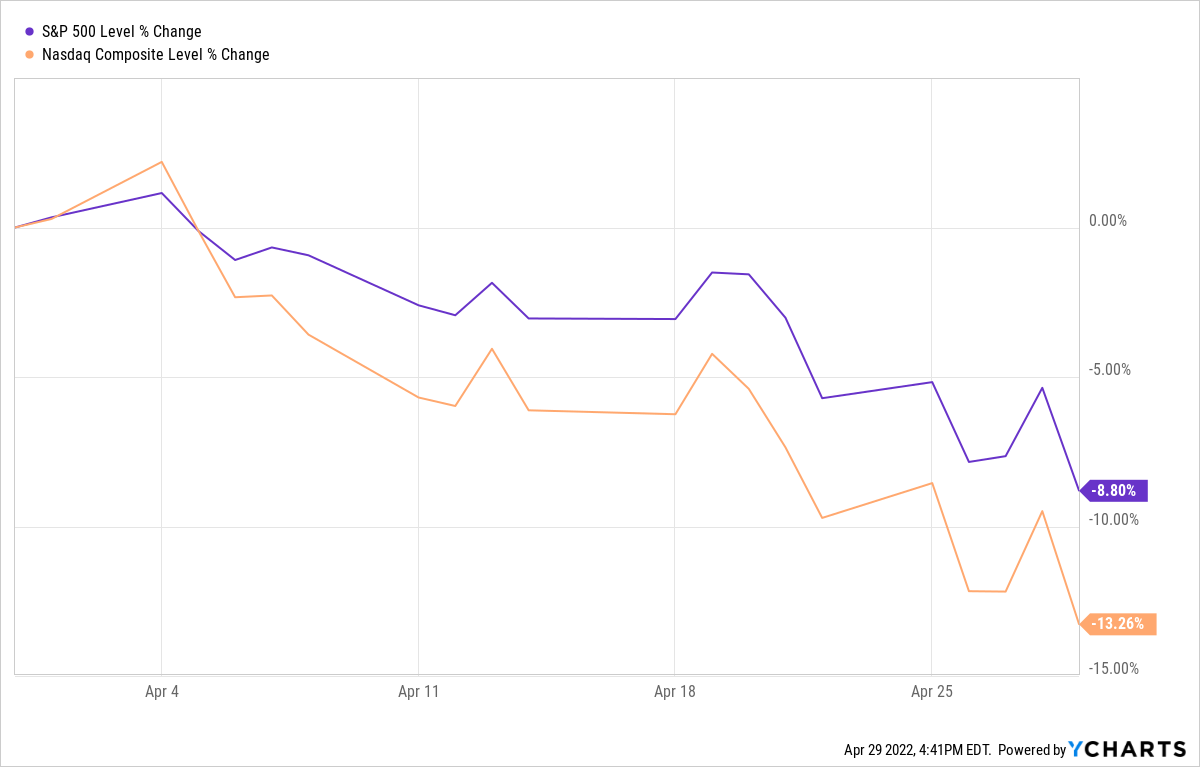 Of course, plenty of major corporations exceeded expectations and/or issued solid guidance in recent days, including several we own in our Income Builder Portfolio: McDonald’s (MCD), Honeywell (HON), Sherwin-Williams (SHW), Visa (V) and Pepsi (PEP), to name a few.

And then there’s Microsoft (MSFT).

On April 26, the software giant announced stellar results for its fiscal third quarter: 18% year-over-year revenue growth that included double-digit growth in each of its divisions; 14% improvement in diluted earnings per share; and solid margins across the board. 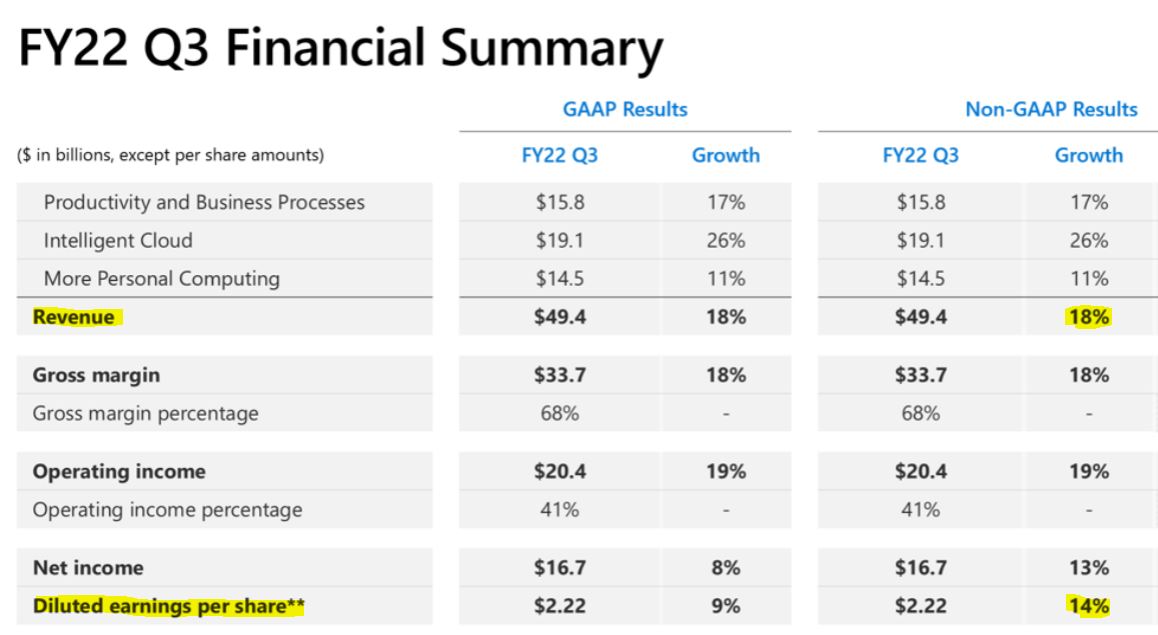 Furthermore, looking ahead to its fiscal Q4, Microsoft projected at least $21 billion more in revenue growth for the company’s renowned Azure cloud platform.

When the market is making my head spin, as has been the case so far this earnings season, I like to focus on reliable, well-managed, high-quality names … and it’s hard to beat the quality that is Microsoft.

So I decided we should buy more MSFT for the Income Builder Portfolio, and I executed a purchase order Friday for two shares on behalf of this site’s co-founder (and IBP money man), Greg Patrick.

Each buy was made with a limit order. For AVA, as sometimes happens, the order was executed in two transactions a moment apart.

As you can see, I used the rest of Greg’s $1,000 semi-monthly allocation to add a little to two other positions — railroad Union Pacific (UNP) and northwest U.S. utility Avista (AVA). Those are fine companies in their own right, but this article is about our main buy, and one of my favorite companies, Microsoft.

In addition to being one of the IBP’s best performers, MSFT is part of the Growth & Income Portfolio that I manage for this site. It’s also the largest position in my personal portfolio. And it’s been No. 1 in total return for the Dividend Growth 50, a public portfolio I’ve run since 2014 (as illustrated in the following table). 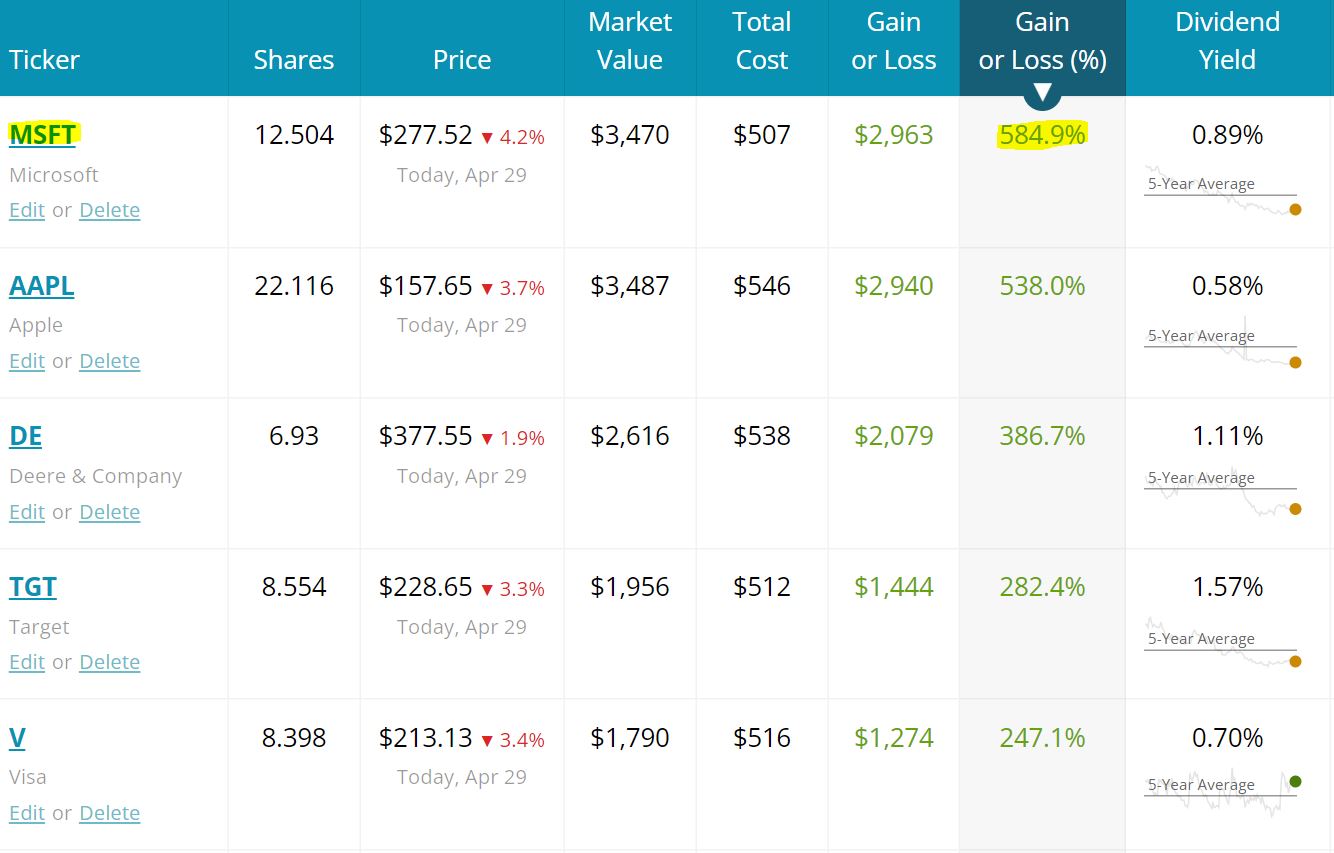 Since we launched the IBP in 2018, I’ve talked a lot about Microsoft. This was the fourth time we bought shares of the company, but first since May 2020.

You can see my MSFT articles, and all the others I’ve written about the portfolio, on our home page HERE. And last year, I made a video for our Dividends and Income YouTube channel in which I picked Microsoft as the one stock I’d buy if I could own only one — watch it HERE.

You can see the all the reasons I’m bullish on Microsoft in my video and previous articles, so I won’t rehash them here. But let’s update a few notable items, starting with its growth in cloud services.

By the end of 2021, Azure had secured 21% of the $178 billion infrastructure cloud market — placing it second, behind only Amazon’s AWS and miles ahead of Google Cloud. 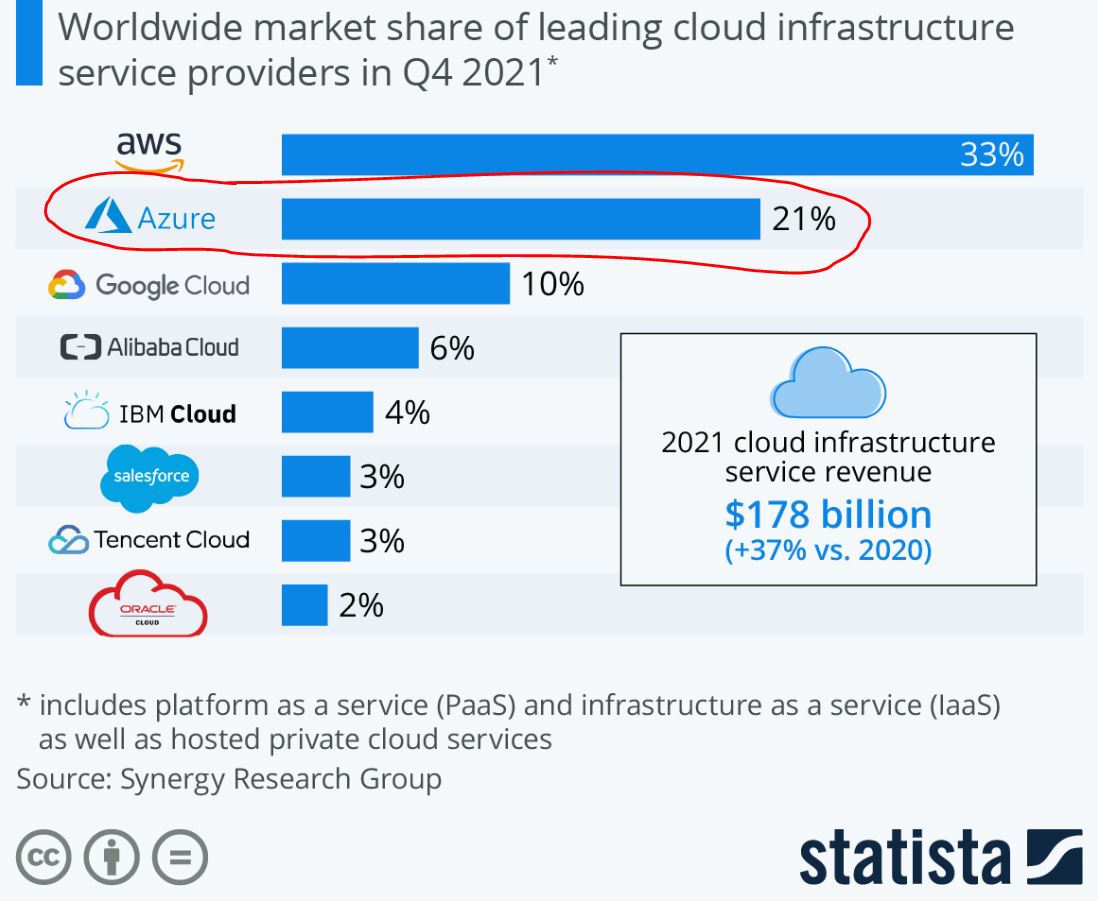 During the most recent earnings call, Microsoft CEO Satya Nadella rattled off the company’s major corporate clients and spoke of Azure as if he were a proud papa — which he kind of is, having prioritized cloud services when he started running the company in 2014.

It was a record third quarter, driven by the continued strength of the Microsoft Cloud, which surpassed $23 billion in revenue, up 32% year-over-year. Going forward, digital technology will be the key input that powers the world’s economic output. …

This quarter, we helped more customers than ever simplifying and accelerating their cloud migrations. … Leaders in every industry, from BlackRock, to Bridgestone, to Lufthansa, are all moving mission-critical workloads to Azure. And we are the market leader for customers’ SAP workloads in the cloud. Atos, Chevron, Fujitsu, and Woolworths all migrated their SAP applications to Azure in recent months.

Overall, we are seeing larger, more strategic Azure commitments from industry leaders, including Boeing, Kraft Heinz, US Bank, and Westpac, who all chose our cloud to accelerate their digital transformations. The number of $100 million-plus Azure deals more than doubled year-over-year. And we’re seeing consumption growth across every industry, customer segment, and geography.

The other major initiative in recent years has been Microsoft 365, the company’s annual-subscription business for its Office line. The following slide from the Q3 earnings presentation highlights the growth of both Microsoft 365 (up 11%, with 58.4 million consumer subscribers) and the cloud (up 29% overall, led by Azure’s 46% growth). 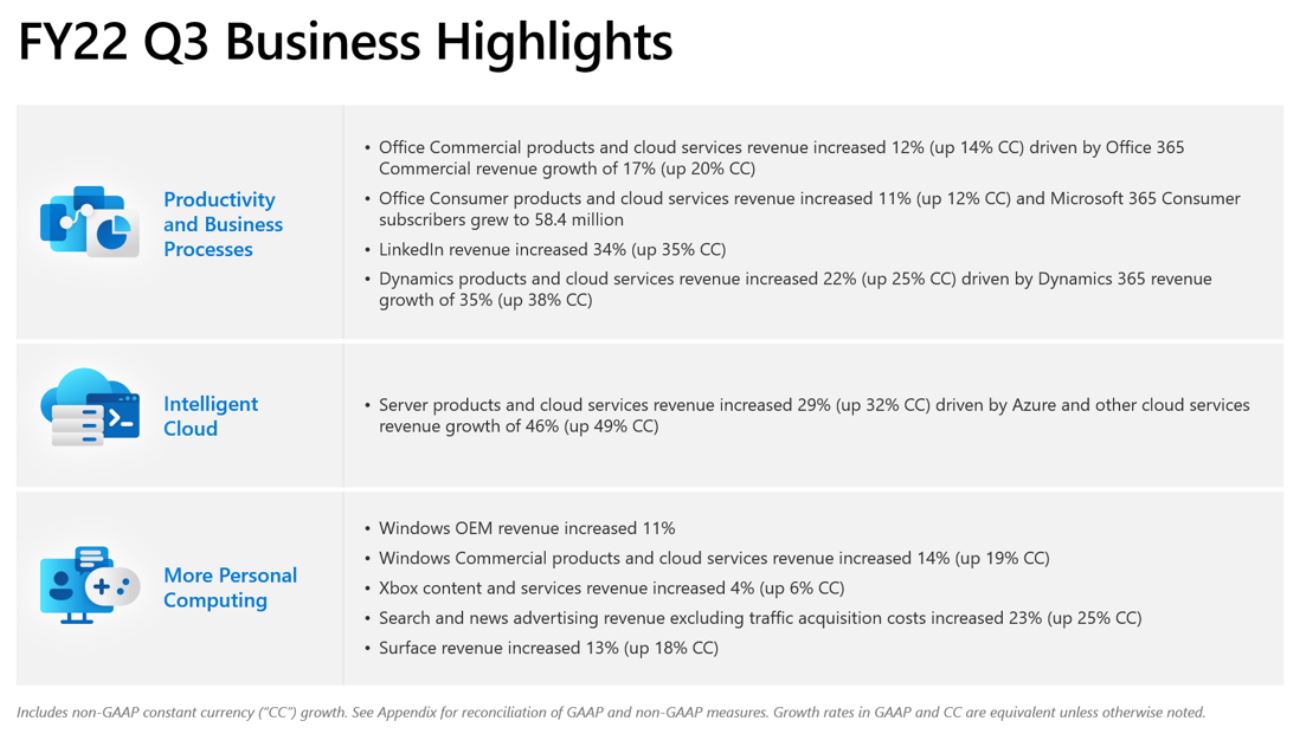 It’s not as if Microsoft has forgotten about other key parts of its operations, either. For instance, LinkedIn revenue was up 34% and Surface tablet revenue increased 13%.

Additionally, the company announced earlier this year that it intends to acquire Activision Blizzard (ATVI) in an enormous $68.7 billion deal that would add a considerable portfolio of well-known games to its existing Xbox content. 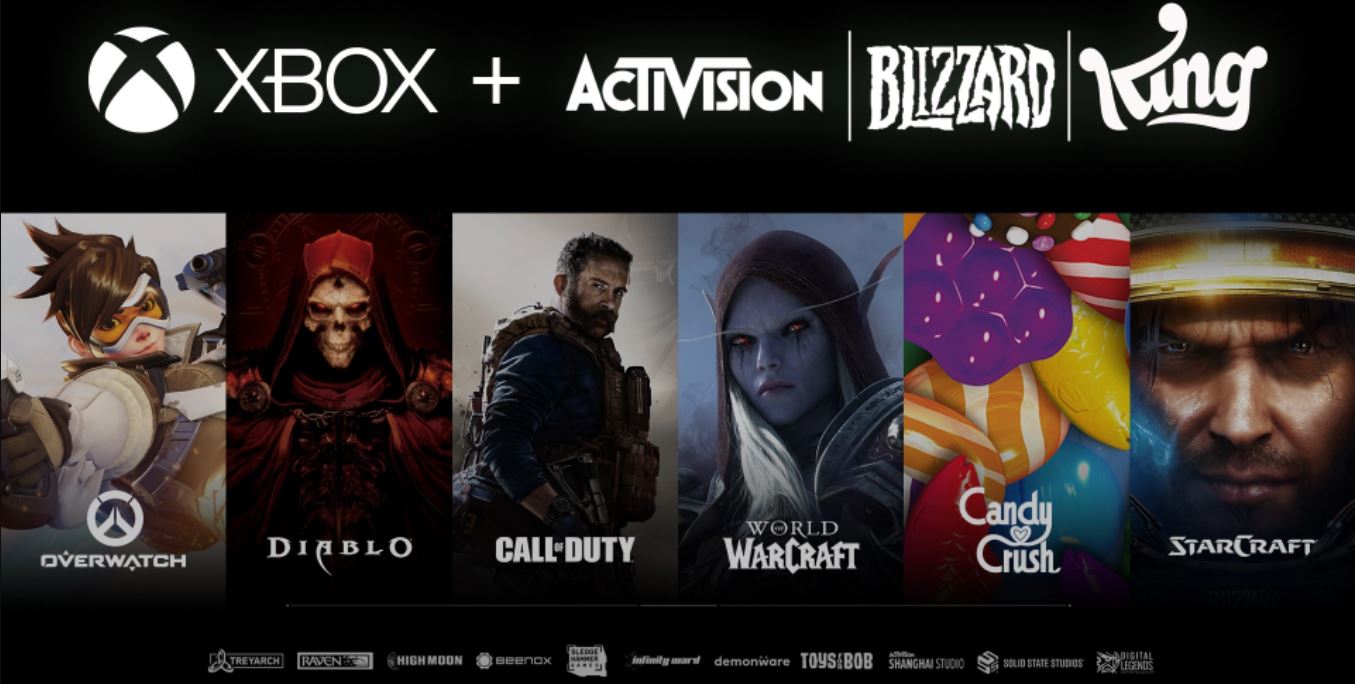 ATVI shareholders approved the deal this week, but there are more regulatory hurdles to clear before it can be completed.

Only a few years ago, Dividend Growth Investing proponents like me were buying Microsoft in part because of its 3%-ish yield.

But the company has performed so well, and the share price has moved up so quickly, and the yield has dropped so far (to less than 1%), that the dividend is no longer much of an inducement to prospective investors. 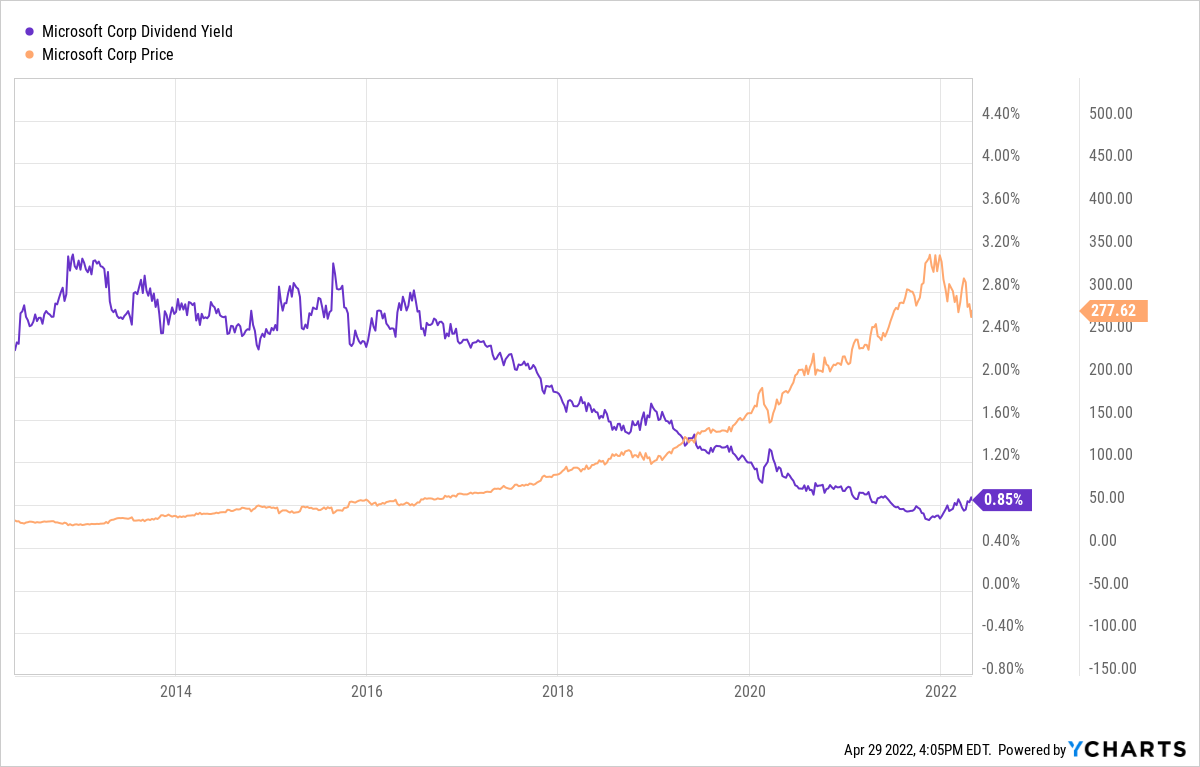 Nevertheless, as a shareholder, I do want the dividend to keep growing — and it has done so for 20 consecutive years. Microsoft’s most recent increase was 10.7%, to 62 cents/quarter, and I wouldn’t be surprised to see another double-digit-percentage raise announced in September.

The next ex-dividend date is May 18, so those who want to receive the June payment must own the stock by May 17.

The  company also has been doing share repurchases, a practice that increases investor value by reducing the number of outstanding shares. 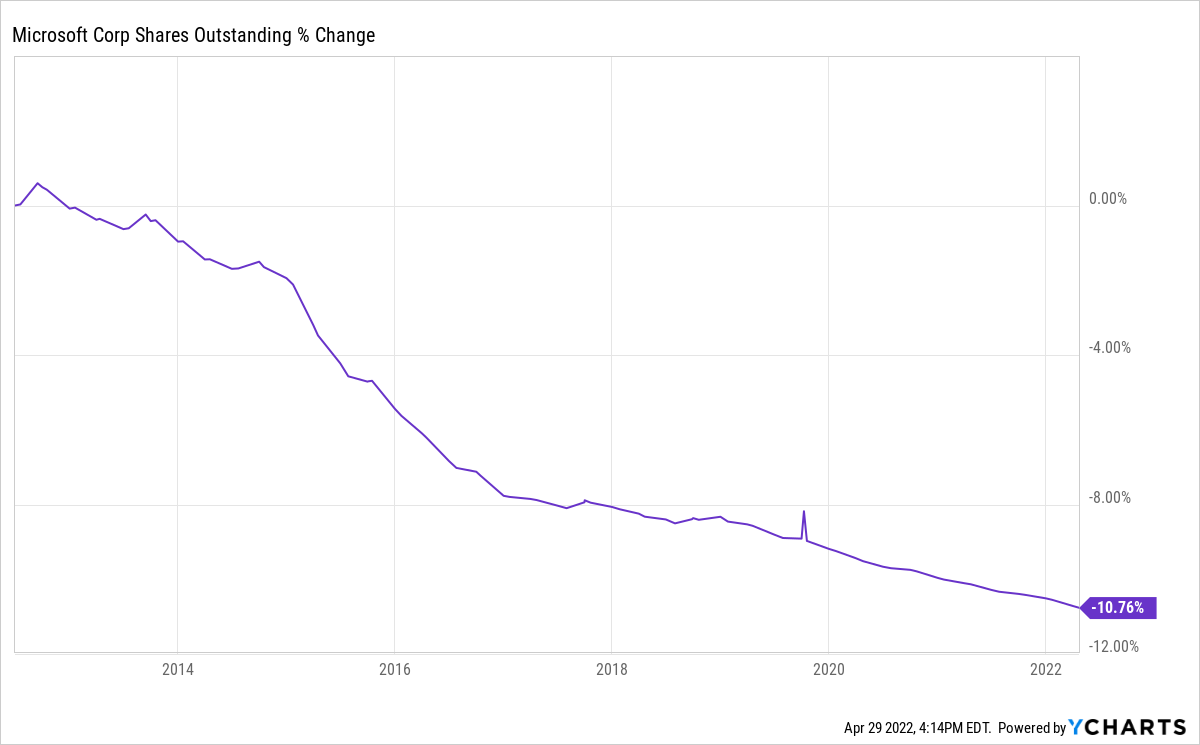 The IBP now owns 20.5813 shares of MSFT, and the position is projected to generate about $51 in income over the next year. Combined with the buys of Union Pacific and Avista, we added about $18 in annual income with Friday’s purchases.

I always take analyst recommendations with a grain of salt … but it’s hard to ignore them when the consensus is as strong as it is for Microsoft.

Of the 24 analysts monitored by TipRanks, all 24 call the stock a “buy,” and their average target price of $363 represents a 31% upside.

Here are some of the individual analyst’s target prices from just this past week: 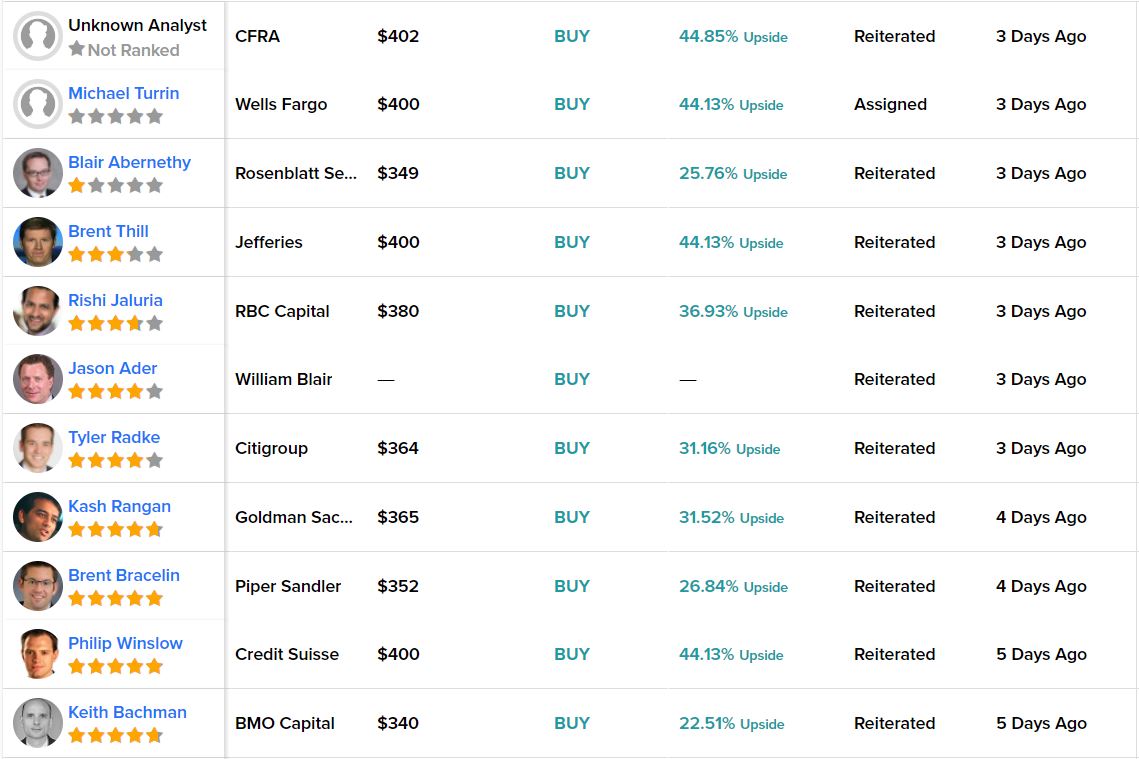 Citing “solid results and guidance” from the Q3 earnings report, Morningstar said it valued MSFT at $352 per share. 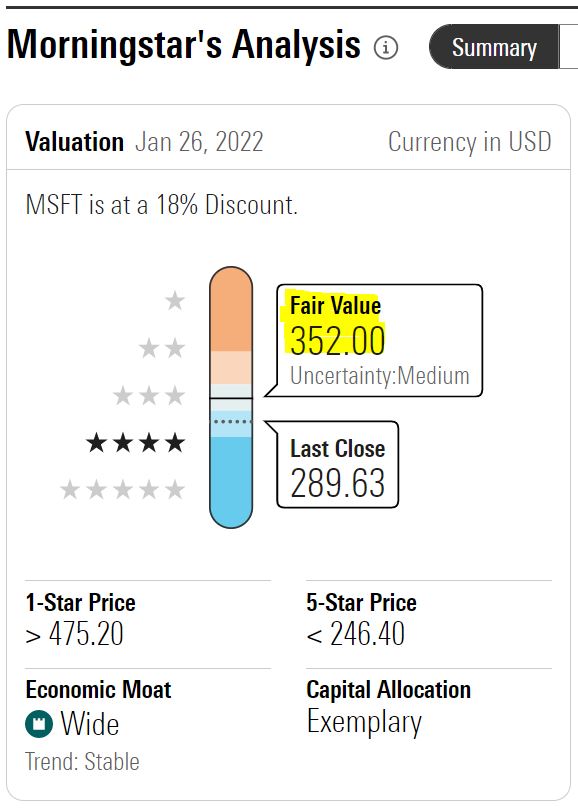 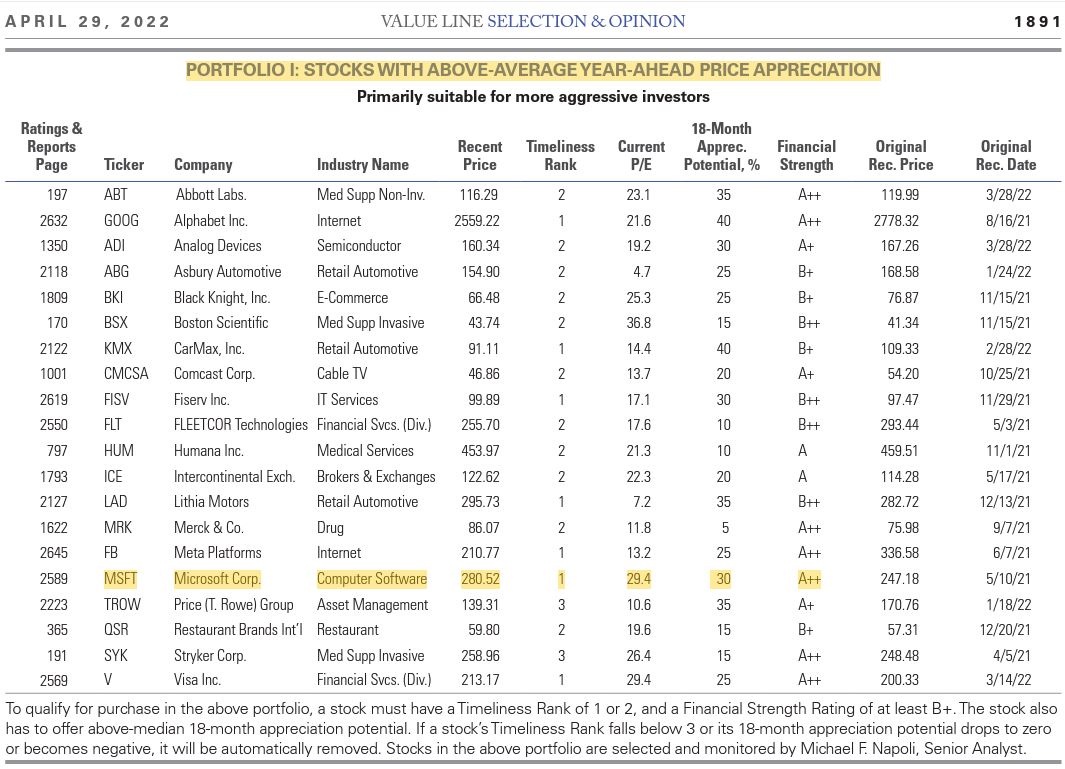 Value Line also has Microsoft on its list of 100 “Highest Growth Stocks” — meaning the company’s annual growth of sales, cash flow, earnings, dividends and book value together averaged 10% or more over the past 10 years and is expected to average at least 10% in the coming 3-5 years. MSFT is one of only a dozen stocks on that list to have received VL’s highest score (1) for relative safety.

Just as Tim Cook said Apple isn’t immune to what’s going on in the world, the same is true of Microsoft.

Dragged down by Friday’s overall market decline, MSFT pulled back 4.2% … including by about $9 after we added the two shares to the Income Builder Portfolio at $286.50 apiece in the late morning.

That’s a little frustrating, but the good news is that we plan to own those shares — and the rest of our MSFT position — for a long time.

There occasionally will be more downs … but with a company as strong as Microsoft, I’d expect there to be far more ups in the years ahead.

As always, investors are urged to conduct their own due diligence before buying any stocks.