Wall Street investment bank Morgan Stanley (MS) doubled its dividend last year … and frankly, I highly doubt the company will come even close to doing so again when it makes its next announcement this summer.

But I did like that CEO James Gorman said this on April 14 during the 2022 first-quarter earnings call when asked about Morgan Stanley putting its considerable capital to use:

It’s a high-class problem and its a great position to be in. We have been very protective of keeping a sort of buffer on a buffer, because you never know in this world, and I think what we have experienced with the markets in the last quarter were extremely volatile and you just have to — you have to anticipate the worst and make sure you are prepared for that. We clearly have done that.

We have been chipping away at the excess capital. … We are clearly going to keep pushing capital distribution through buybacks and dividends to shareholders. That’s clearly the case. We have just done two major acquisitions with about $21 billion. We would do more deals … if they fit with our strategy; we won’t do things that take us offline, off piece. We want to stay true to our strategy and our strengths in our three core businesses.

My takeaway from that comment: Morgan Stanley has significant money available, and it will continue using much of it to enrich shareholder value through dividend growth and stock buybacks.

The commitment to the dividend is only one of many reasons I decided to add to our MS stake in the Income Builder Portfolio.

On April 19, I executed a purchase order for 8 additional shares of the stock at $87.25 apiece on behalf of this site’s co-founder (and IBP money man) Greg Patrick.

As you can see, I used the rest of Greg’s $1,000 semi-monthly allocation to add a few shares to another of our smaller positions — health-care conglomerate CVS Health (CVS).

But this article is about Morgan Stanley … and before I get into other reasons we’re building our stake in the company, let’s talk a little more about the dividend.

As the above graphic shows, Morgan Stanley had frozen its quarterly payout at 35 cents a share in 2020 and into 2021 because it, like all other major U.S. banks, was prohibited from raising dividends during the worst of the COVID-19 pandemic. Then, last summer, MS gave shareholders that delightful divvy double to 70 cents.

The fourth payment in the cycle has been declared for May 13 (the purple bar in the above graphic), with the ex-dividend date being on April 28. So investors who want to receive the next dividend must own shares by market close of April 27. 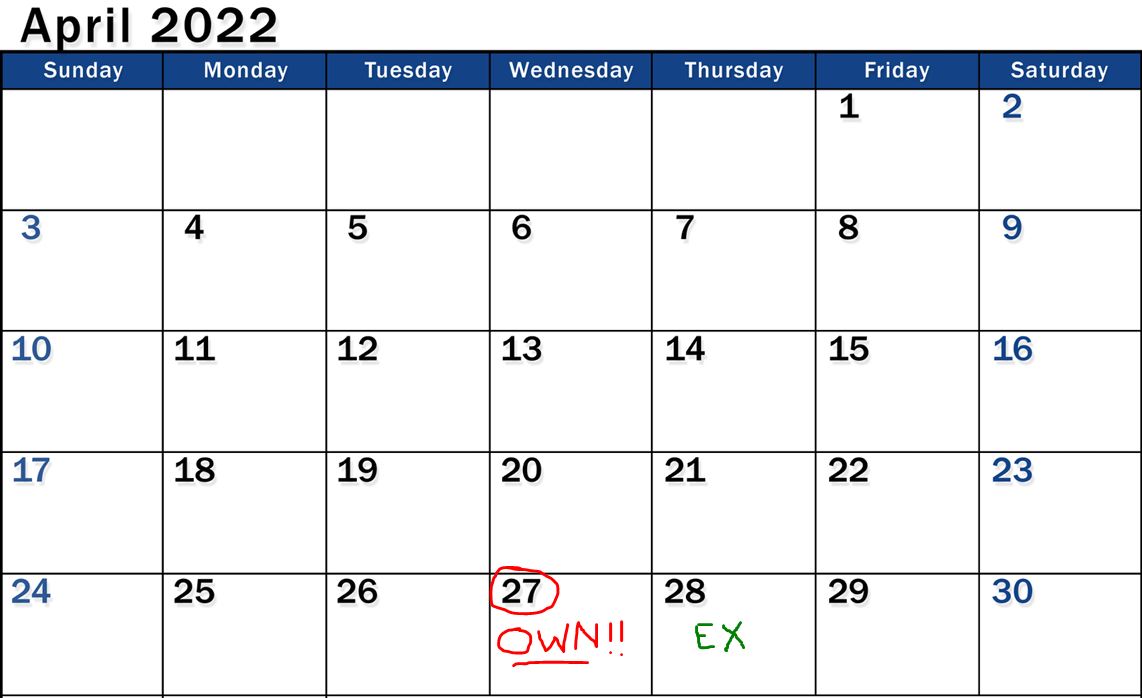 While 100% raises are so rare that it was really an eye-popping announcement at the time, the fact is that MS has been aggressively growing its dividend for years now. Even before the big raise, the company had increased its payout by 600% from 2013 through mid-2021. 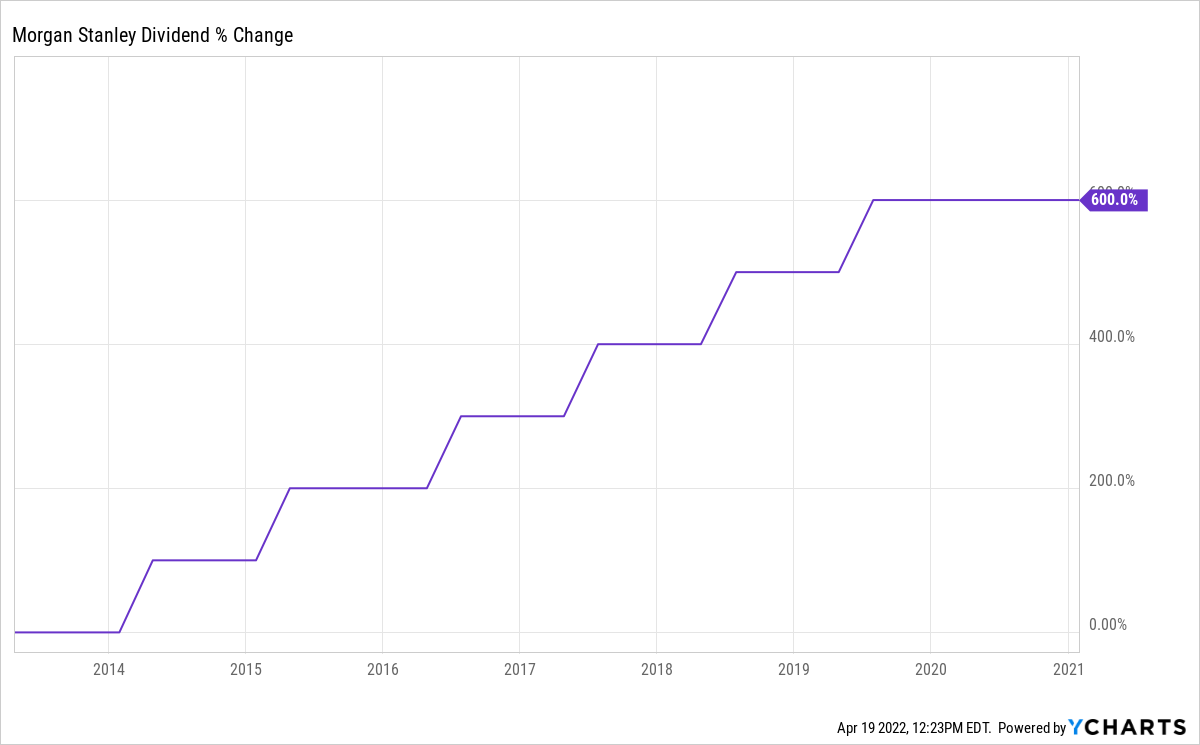 The combination of Morgan Stanley’s dividend growth and the recent pressure on the stock prices of all banks has pushed the company’s yield to 3.2%. Only during the brief Covid crash of 2020 has the yield been materially higher during the last several decades. 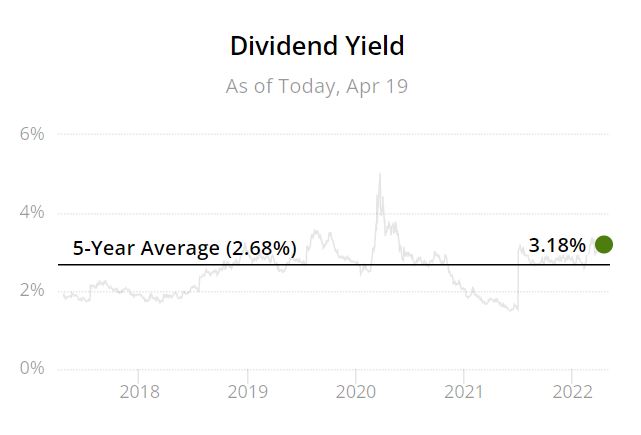 Put all of that together with the company’s $12 billion buyback program — which benefits MS investors by reducing share count and increasing the EPS of the remaining shares — and one can see why Morningstar gives Morgan Stanley its top “Exemplary” rating for capital allocation:

In our opinion, the company’s balance sheet is sound, its capital investment decisions are exceptional, and its capital return strategy is appropriate. … At the end of 2021, the company had over $25 billion of goodwill and intangibles, with much of it from the acquisition of Smith Barney. Smith Barney was a transformative deal for Morgan Stanley and has been a key driver of the company’s strategy and outperformance for the previous decade. More recent acquisitions of Eaton Vance and E-Trade also have the potential to further the company’s shift to higher return on capital and steadier investment management revenue, give Morgan Stanley capabilities to compete with the largest financial sector companies, and gives the company exposure to secular tailwinds in workplace services and mass customization of asset management products. …

Morgan Stanley has historically returned more capital through share repurchases than dividends, which makes sense for a company that has a large investment banking business. With a greater portion of earnings coming from steadier investment management activities, the company is increasing its dividend payout over time, including a doubling of its dividend in 2021.

This buy bumps the Income Builder Portfolio’s stake in MS to 23.7179 shares. If we figure in the dividend raise the company is expected to announce in a couple of months — let’s conservatively go with an 8% hike — the annual income generation would be about $72.

We first bought Morgan Stanley on July 12 at $92.85/share … so even after including reinvested dividends, the IBP’s position is down close to 5%.

That’s obviously nothing to crow about, but it’s not as if MS is the only laggard in its industry. 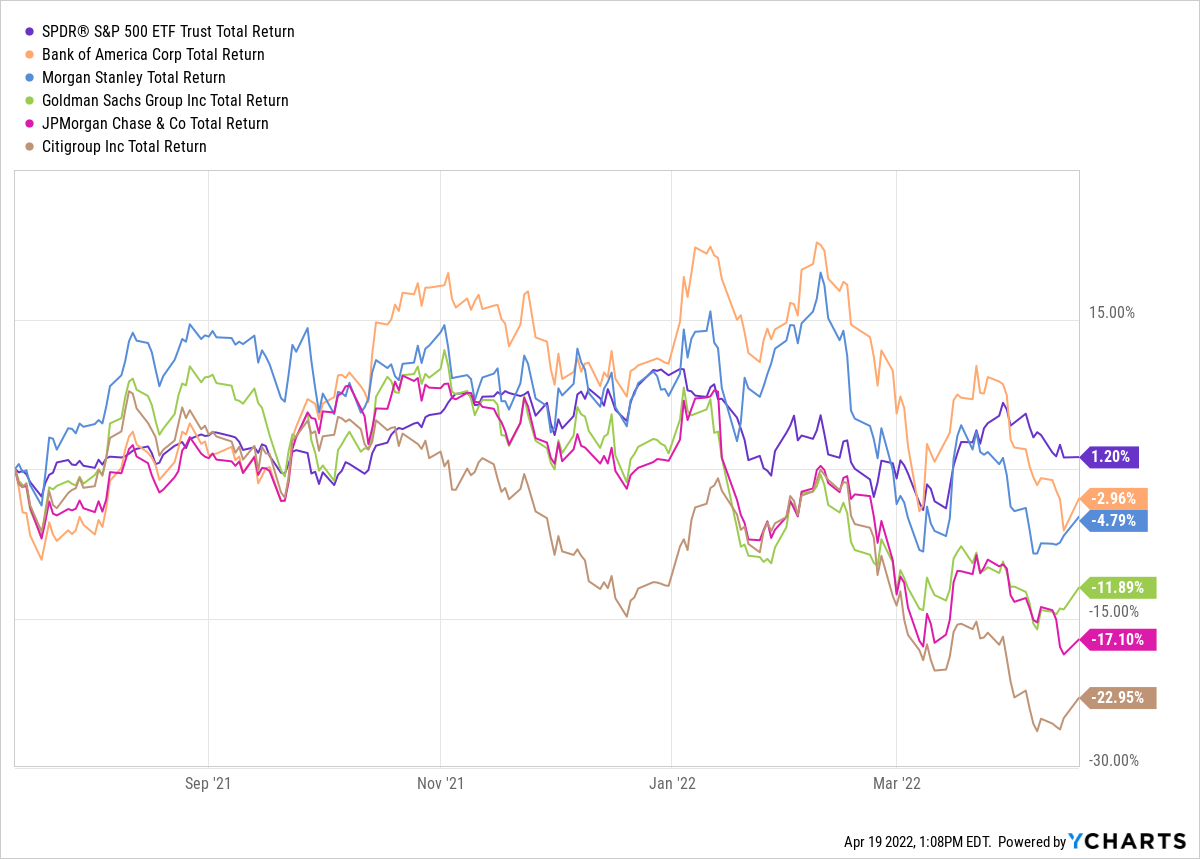 Goldman Sachs (GS), JPMorgan Chase (JPM) and Citigroup (C) have fared much worse, and even the S&P 500 Index is showing only about a 1% total return during the period.

A number of factors have weighed on banks, including the pandemic, inflation and, most recently, Russia’s evil aggression against Ukraine.

Even after this drawdown, though, Morgan Stanley has crushed the market over the last decade … and I continue to think the company will be a long-term winner. 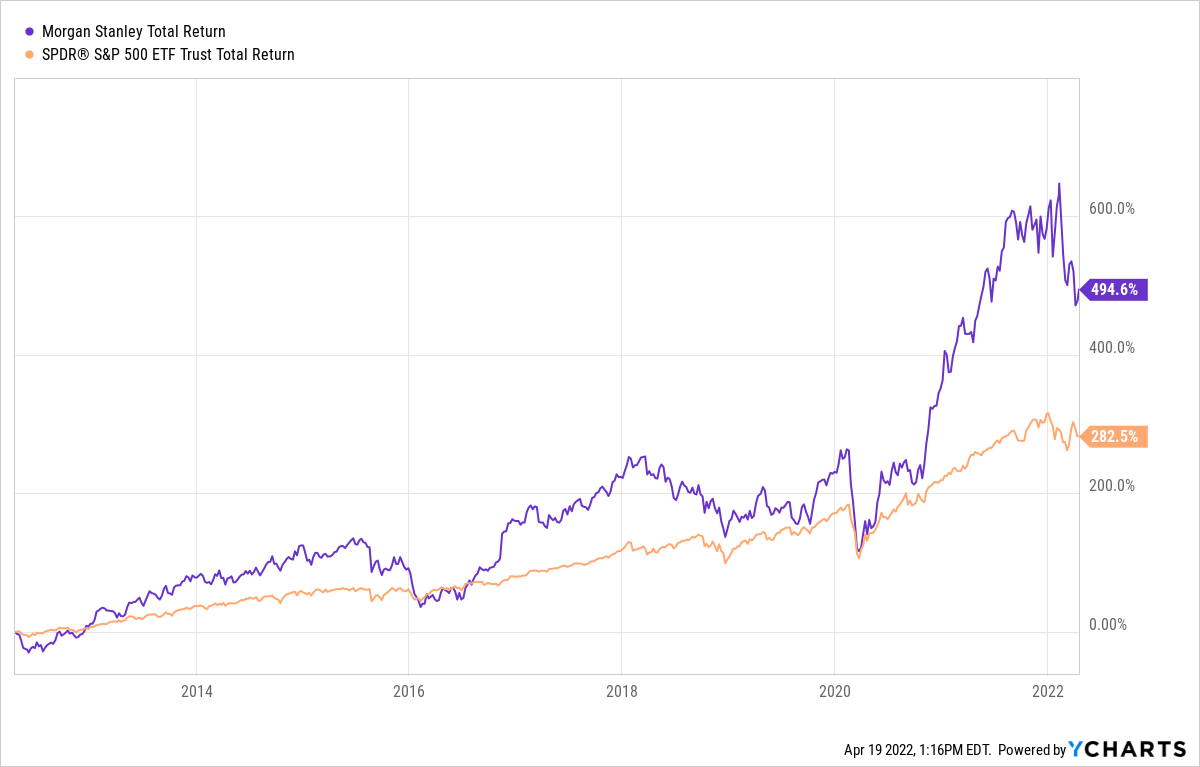 On April 14, MS reported strength and resiliency during Q1.

Although metrics such as revenue, earnings and return on tangible equity (ROTCE) were down somewhat from Q1 2021, Morgan Stanley still exceeded estimates from analysts and the company itself. Its $14.8 billion in net revenues represented the second-best quarterly showing in its 87-year history.

For Q1, year-over-year revenue in the Institutional Securities division was down despite growth in equity. Revenue was basically flat in Wealth Management, with the highlight being $142 billion in new assets. Investment Management saw a small increase in revenues and assets under management.

Over time, I am confident that the recent acquisitions of Eaton Vance and E-Trade will contribute substantially to Morgan Stanley’s bottom line, and will move the needle for MS investors.

A silver lining to the pullback in Morgan Stanley’s stock price: It makes MS a more attractive investing candidate.

Of the 29 analysts tracked by Refinitiv, 20 are calling MS either a “strong buy” or “buy.”

The average 12-month price target of the 22 analysts who assigned one suggests a 27% upside for Morgan Stanley’s stock price.

One of the most bullish analytical firms is Credit Suisse, which digested Morgan Stanley’s Q1 earnings report, raised expectations for the full year, and re-affirmed its $124 target price — 42% higher than the $87.25 that we paid for the IBP’s latest buy. (Tuesday’s closing price was $88.91, so I’m glad we bought early in the session.)

After earnings, BMO Capital raised its price target to $113. 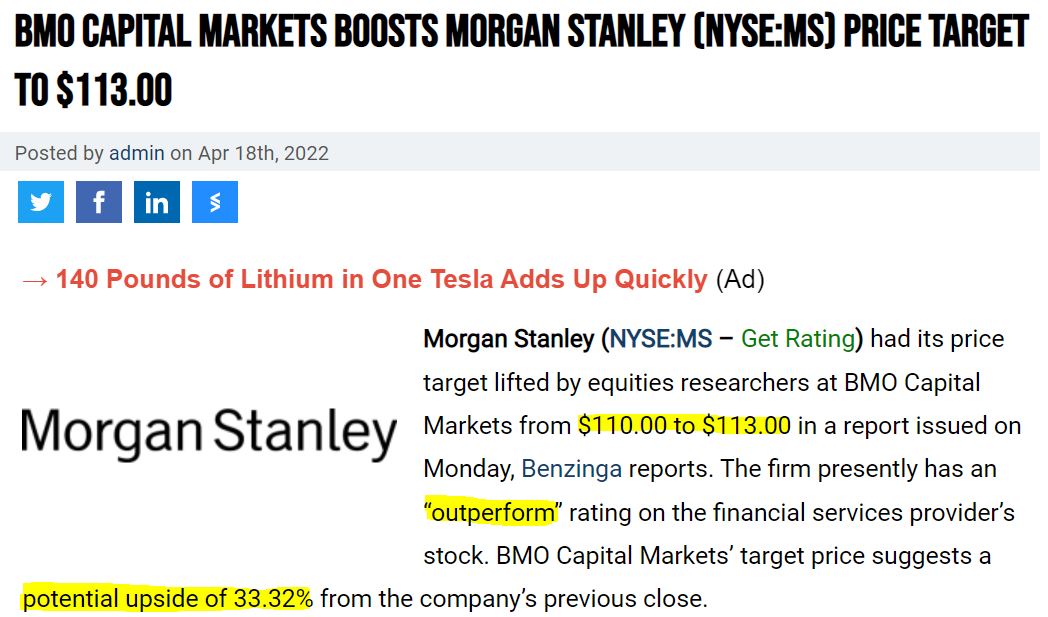 CFRA lowered its price target from $115 to $100 due to what it calls a “narrower risk premium,” but it nonetheless considers Morgan Stanley a buy, with analyst Kenneth Leon saying: “MS is growing the franchise in a challenging environment.”

Schwab expects the stock to “strongly outperform” over the next year. 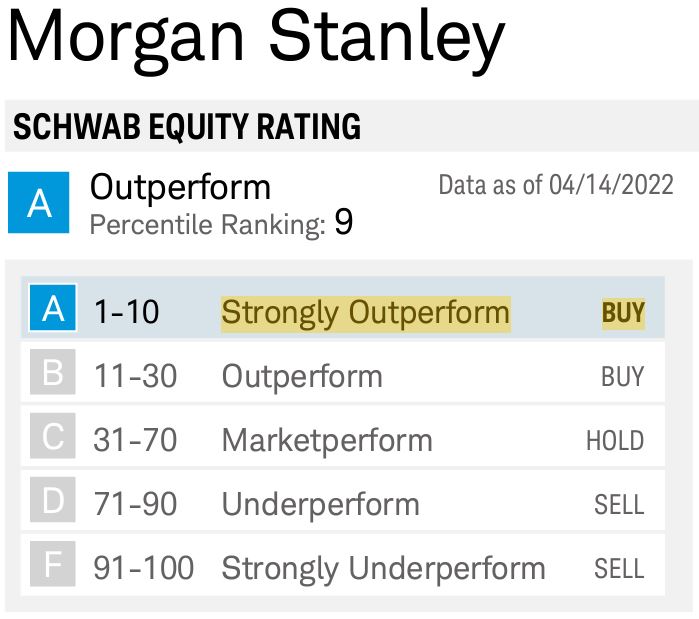 With a fair value estimate of $95, Morningstar says MS is about fairly valued right now. 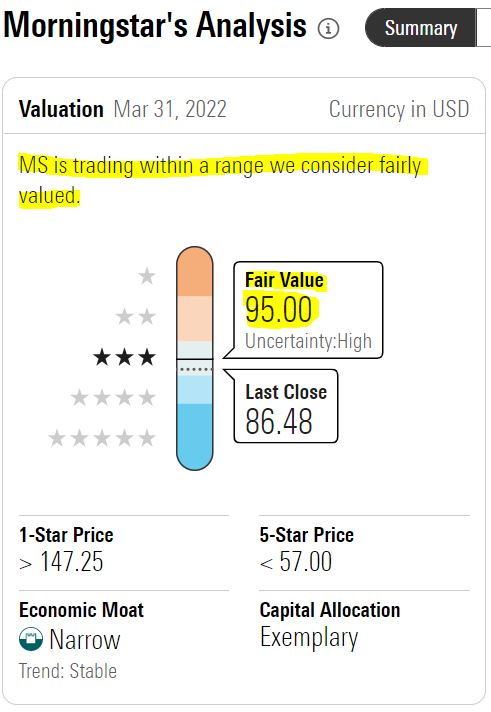 FAST Graphs says that, with a “blended PE ratio” of about 11, Morgan Stanley is trading at a discount to both its 10-year norm (12.8) and 5-year norm (11.8). More importantly to me — because investing is about a company’s future prospects — FAST Graphs gives reason to believe nice growth is coming. 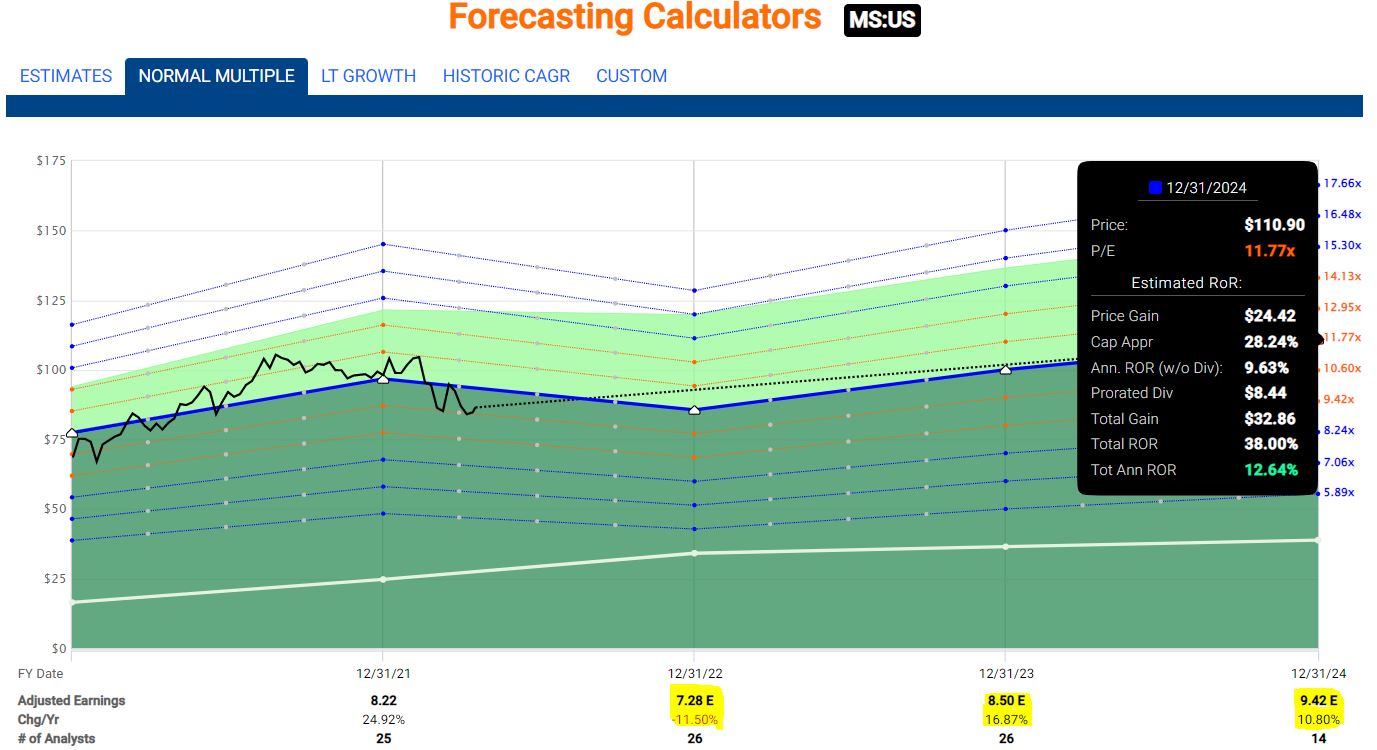 I’m a Dividend Growth Investing proponent, so I prefer dividends to buybacks … but it’s nice that Morgan Stanley provides both. And I do like that MS is getting a relatively “good deal” on its buybacks due to the stock being undervalued.

Given the strong yield and incredible dividend growth — as well as the company’s solid fundamentals and potential for future performance — I’ve been building an MS position within my personal portfolio as well as within the IBP.

As always, investors are strongly encouraged to conduct their own thorough due diligence before buying any stock.

To see all 47 Income Builder Portfolio positions, as well as links to every IBP-related article I’ve written, check out the home page HERE.

My most recent video for our Dividends And Income Channel on YouTube can be seen HERE.

I also manage the Growth & Income Portfolio for this site. View it HERE.