New investments are exciting … but not quite as exciting as new additions to the family. Ladies and gentlemen, meet our first granddaughter (and fourth grandchild), Piper Quinn Randall! 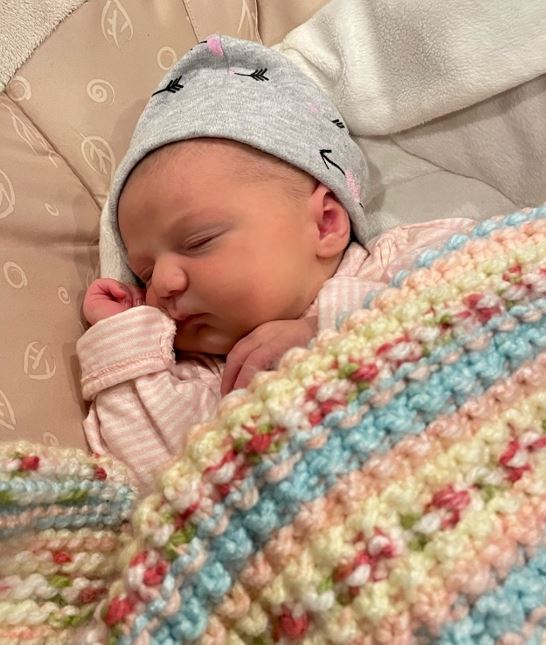 Piper, shown here on March 17 when she was 5 days old, sure looks cozy under the blanket that Grandma Robbie spent weeks knitting.

Most exciting of all is making a new investment on behalf of a new family member. And that’s just what my wife and I did in March, when we bought $100 worth of Toronto-Dominion Bank (TD) stock on behalf of Piper and her 17-month-old brother, Owen.

As you can see, we also bought four other stocks last month — adding to the existing Nike (NKE), Microsoft (MSFT), Lam Research (LRCX) and Pepsi (PEP) positions in the Growth & Income Portfolio.

I launched the GIP (originally called the Grand-Twins College Fund) in June 2020 to eventually help pay some college expenses for our now 2 1/2-year-old grand-twins, Logan and Jack. 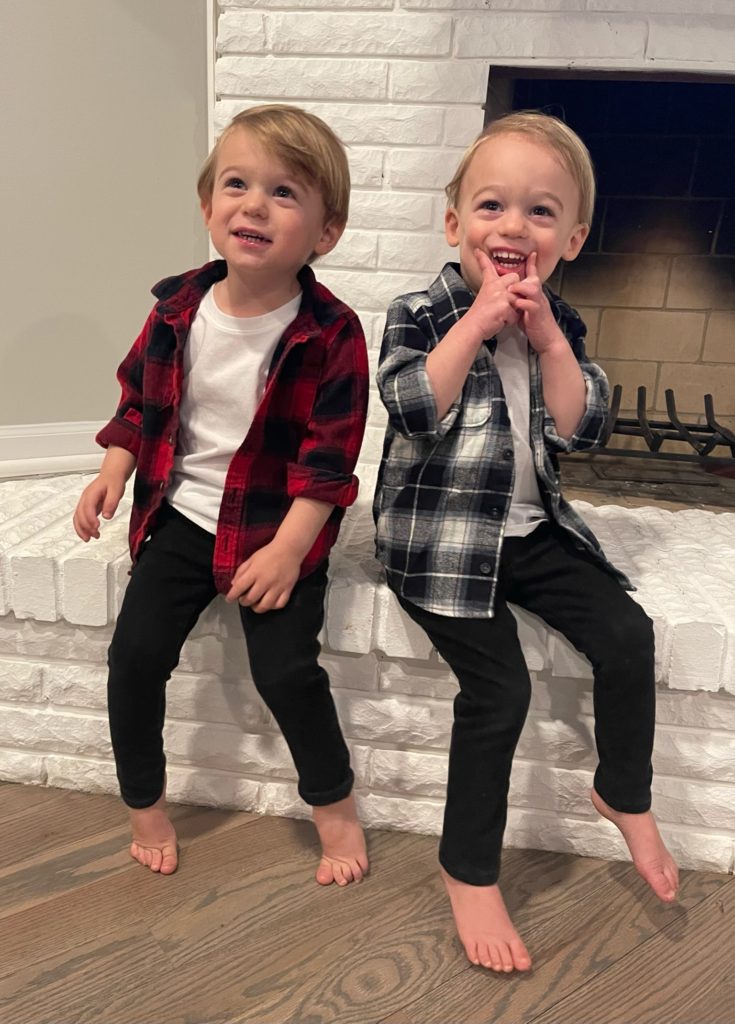 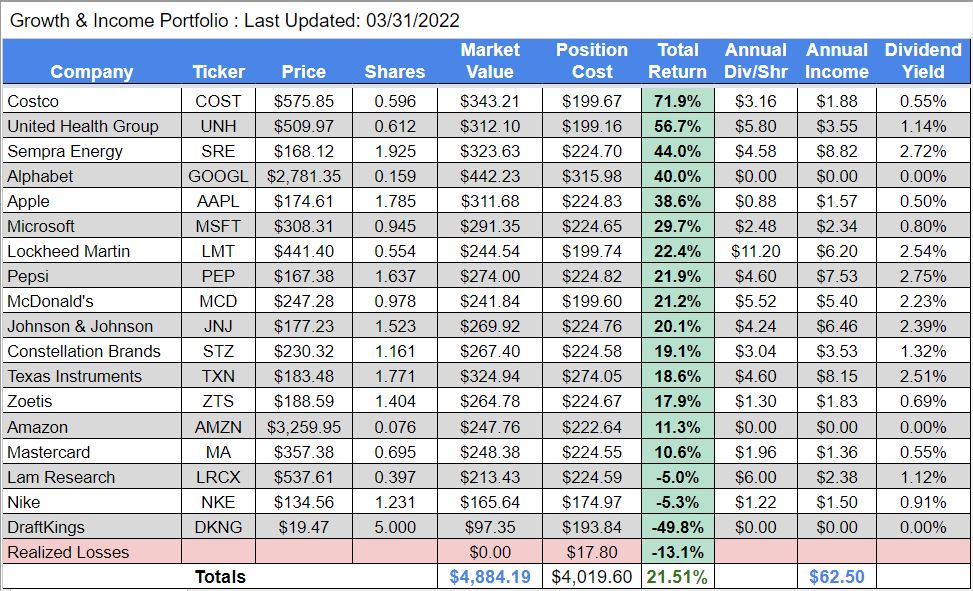 (The table above is constantly updated on the portfolio’s home page — HERE — where you also can find links to all of my GIP-related articles.)

To celebrate Owen’s first birthday this past October, as well as the news that he’d soon be a big brother, we also began investing on their behalf. 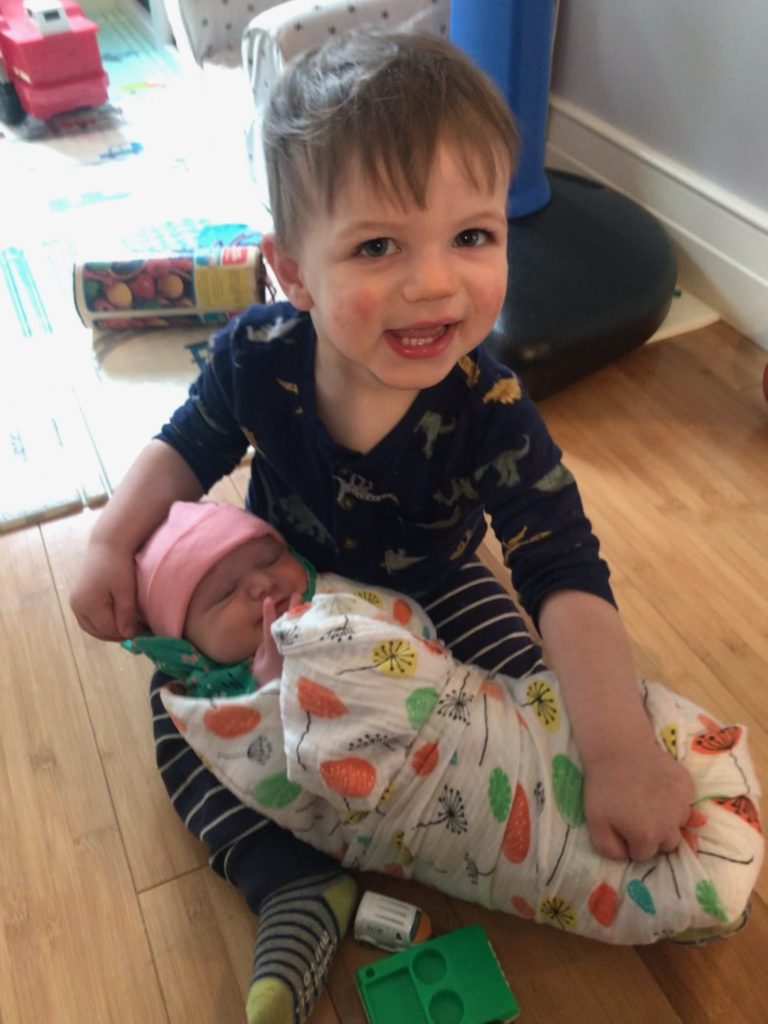 Their father (my son-in-law Ben) is Canadian. Interestingly, although he and my daughter Katie have built a great portfolio of their own, they have no stocks from his homeland outside of small positions within mutual funds.

I’ve always liked the stability and dividend growth of Canada’s “Big Six” banks, which combine to hold about 90% of the country’s banking deposits. So I started Owen and Piper’s college fund in October with Bank of Nova Scotia (BNS), and I added another $100 worth of the stock in each of the next four months.

Eventually, this account very well might own shares in all of the major Canadian banks. I started with the highest yielder in BNS, and now I’m going with the largest by assets.

TD also ranks second among Canadian banks in market cap, just behind Royal Bank of Canada (RY), and it has the largest U.S. presence.

The bank derives approximately 55% of its revenue from Canada and 35% from the United States, with the rest from other countries. Toronto-Dominion has done an admirable job of focusing on its Canadian retail operations and growing into number-one or -two market share for most key products in this segment. The bank also has number-two market share for business banking in Canada. With over CAD 400 billion in Canadian assets under management and top-three dealer status in Canada, and being the number-one card issuer in Canada, Toronto-Dominion should remain one of the dominant Canadian banks for years to come.

Toronto-Dominion has also established a significant presence in the U.S. by having the most branches in the U.S. among Canadian banks as well as a 13.4% ownership stake in Charles Schwab (after the TD Ameritrade acquisition). While we like the higher exposure to more growth in the U.S., the segment has lower returns on equity than the Canadian segment, partially because of goodwill but also partially because returns are naturally lower on average. We also like Toronto-Dominion’s positioning as a major discount brokerage player because we believe this industry is ripe for growth as investors seek out lower-cost alternatives, and the bank could leverage its knowledge of the industry for future growth in Canada. 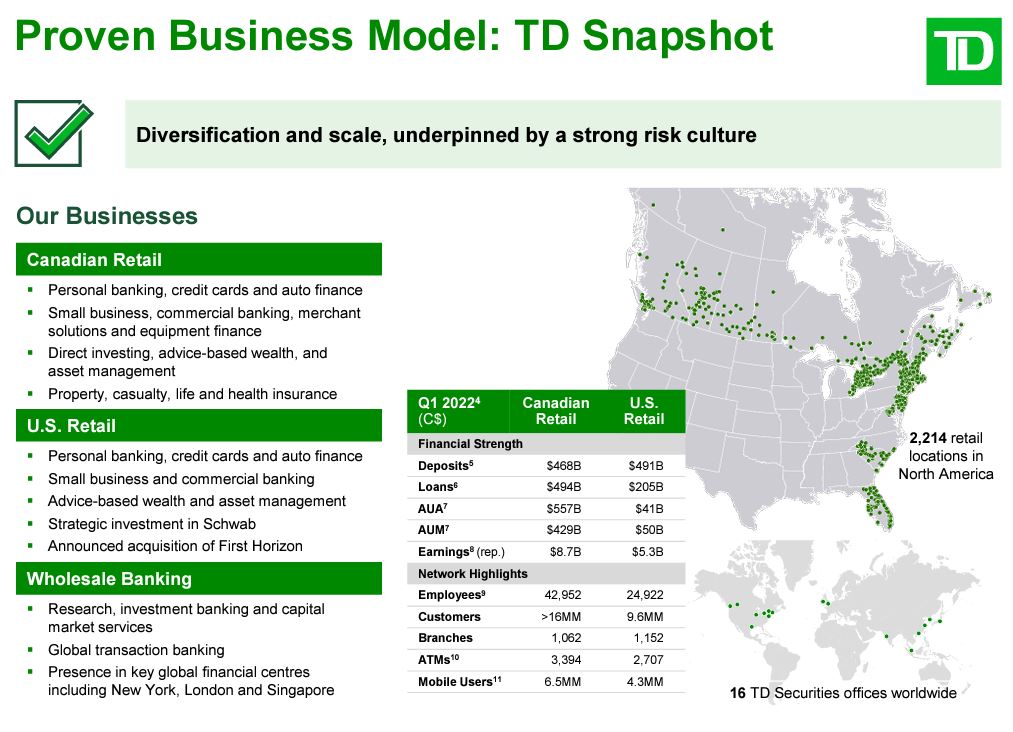 Given all the positive things Morningstar had to say about TD, it should be little surprise that they give the bank top ratings for competitive economic advantage (Wide Moat) and allocation of capital (Exemplary).

The bank also gets high grades from Value Line for relative safety (1) and financial strength (A); a “safe” 80 dividend safety score from Simply Safe Dividends; and some of the best credit ratings in the industry. 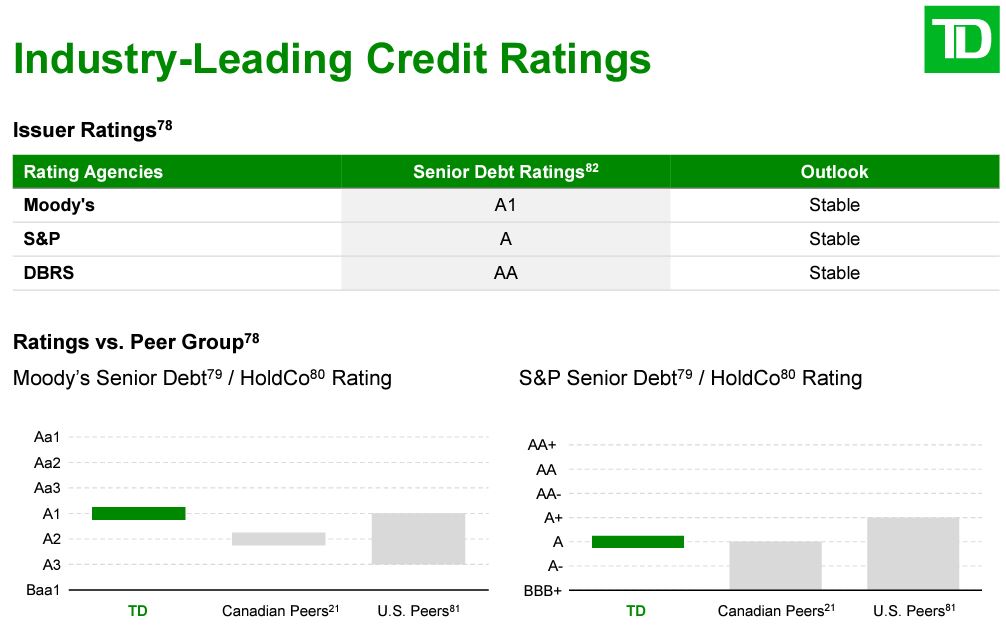 TD Bank’s earnings have had about a 10% compound annual growth rate the last five years, topped by its best year ever in 2021. 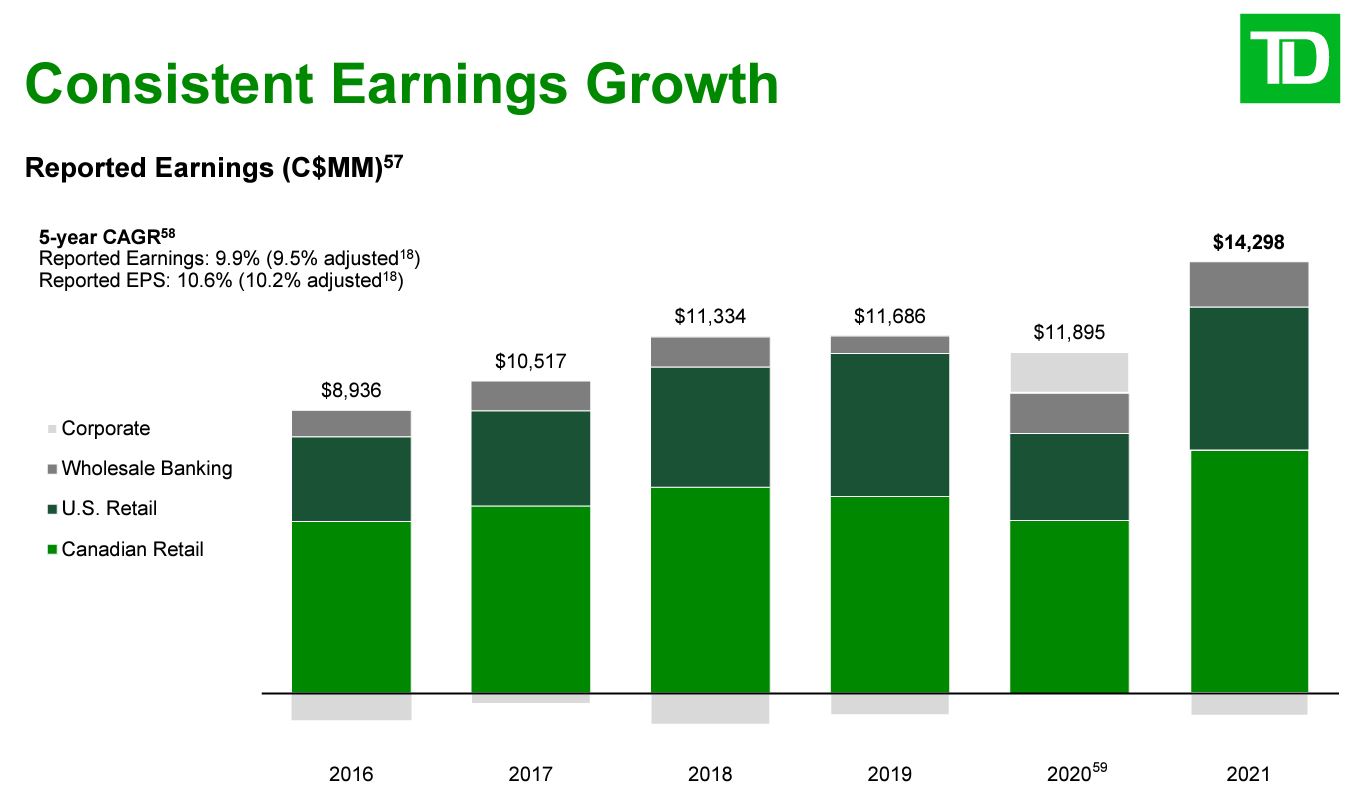 On Feb. 28, Toronto-Dominion announced it had reached an agreement to acquire First Horizon, a Memphis-based bank that operates 412 branches and serves 1.1 million customers across 12 U.S. states.

For years, I’ve been (saying) … that one of our goals is to expand in the fast-growing southeast of the United States. This week, we delivered on that promise. Upon closing, we will achieve leadership positions in key markets, strengthen our presence in states such as Florida and the Carolinas, and gain footholds in the large Georgia and Texas markets. …

First Horizon’s banking centers are located in markets whose populations are projected to grow 50% faster than the U. S. national average. …

We expect to achieve $610 million in annual cost synergies. … This transaction is expected to deliver 10% plus fully synergized adjusted EPS accretion in fiscal 2023, and the deal is immediately accretive to adjusted EPS at closing. …

This transaction is strategically compelling, financially attractive within our risk appetite and culturally aligned. First Horizon is a terrific fit for TD and will enable us to further accelerate our growth in the U.S.

As is the case with Bank of Nova Scotia — and the rest of Canada’s big banks — Toronto-Dominion has a long history of paying and growing its dividend.

TD Bank has been distributing divvy dollars to shareholders for 164 consecutive years. That’s not a typo: 164 years! 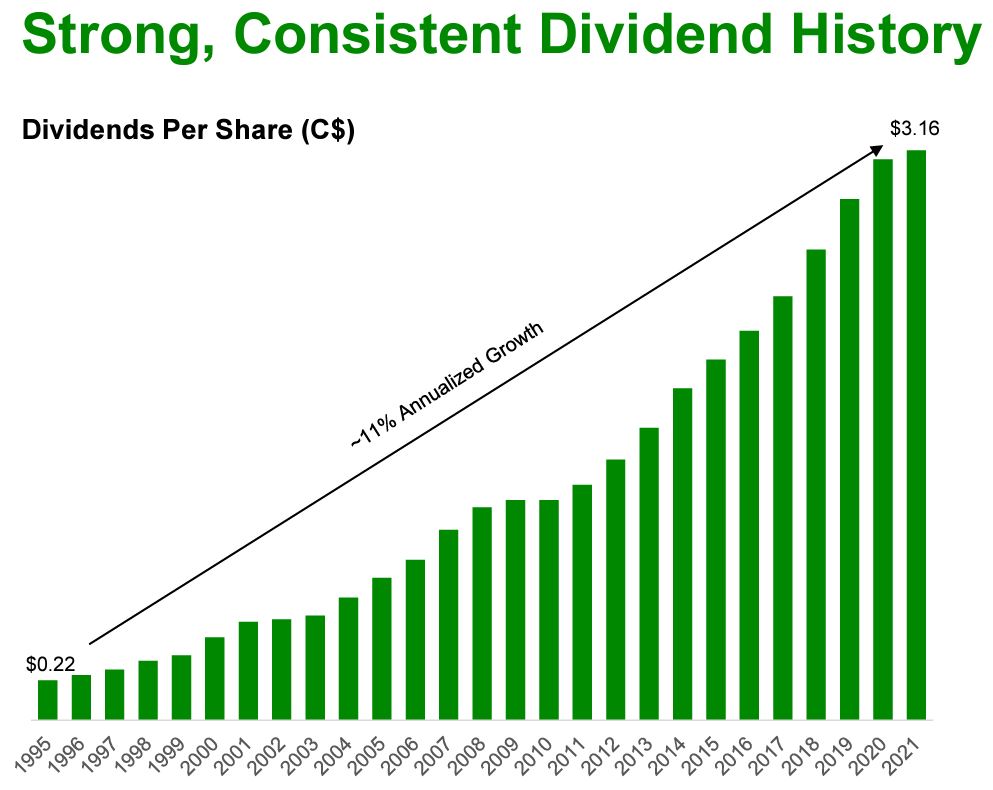 You might have noticed that the data in the above graphic is figured in Canadian dollars. Because of foreign exchange rates, there are times that Canadian companies raise their dividends in CDN dollars but the payouts actually decrease in U.S. dollars.

But exchange rates fluctuate over time; rest assured, few companies anywhere have made the kind of long-term commitment to its dividend that Toronto-Dominion has.

After holding its dividend steady for 7 consecutive quarters during the worst of the Covid-19 pandemic, TD raised it by 12.7% last fall. At the current exchange rate, the annualized payout in U.S. dollars is now about $2.84, for a yield of roughly 3.5%.

TD’s ex-dividend date is Thursday, April 7. That means to collect the next dividend, you must own shares of the stock by market close of Wednesday, April 6. 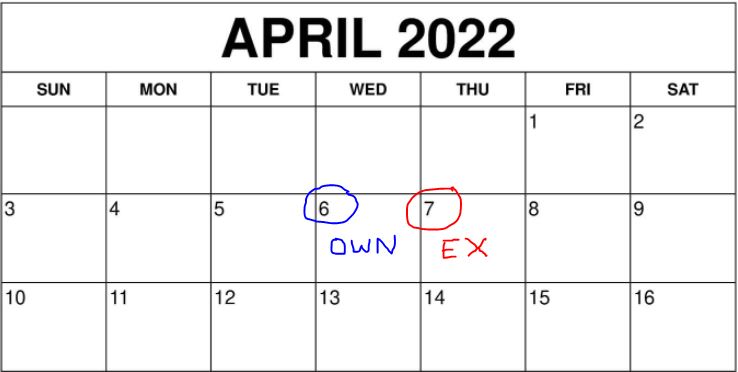 Another important note: If you hold TD (or any Canadian stock) in a taxable account, the dividend is subject to that country’s 15% withholding tax. (A U.S. resident can request a refund by filing paperwork at tax-reporting time.)

One way around that for U.S. residents is to hold Canadian stocks in a tax-advantaged account; in IRAs and 401(k) plans, taxes are not withheld thanks to a “treaty” between the countries.

I have both TD and BNS within a Roth IRA, so I won’t have to deal with those taxes (and the associated paperwork).

Many analysts are high on Toronto-Dominion’s prospects. For example, citing positive trends in every category it measures, Ford Equity Research expects outperformance at least in the near-term.

The same is true for the folks at Schwab, who give TD Bank its highest “Buy” rating. 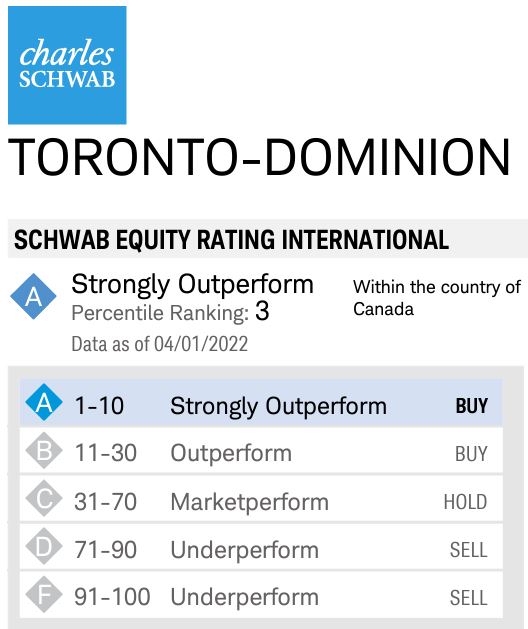 Morningstar’s analysts consider the stock to be fairly valued.

That’s also the case at CFRA.

The 11 analysts monitored by TipRanks have an $88 target price for TD, suggesting an upside of about 11%. 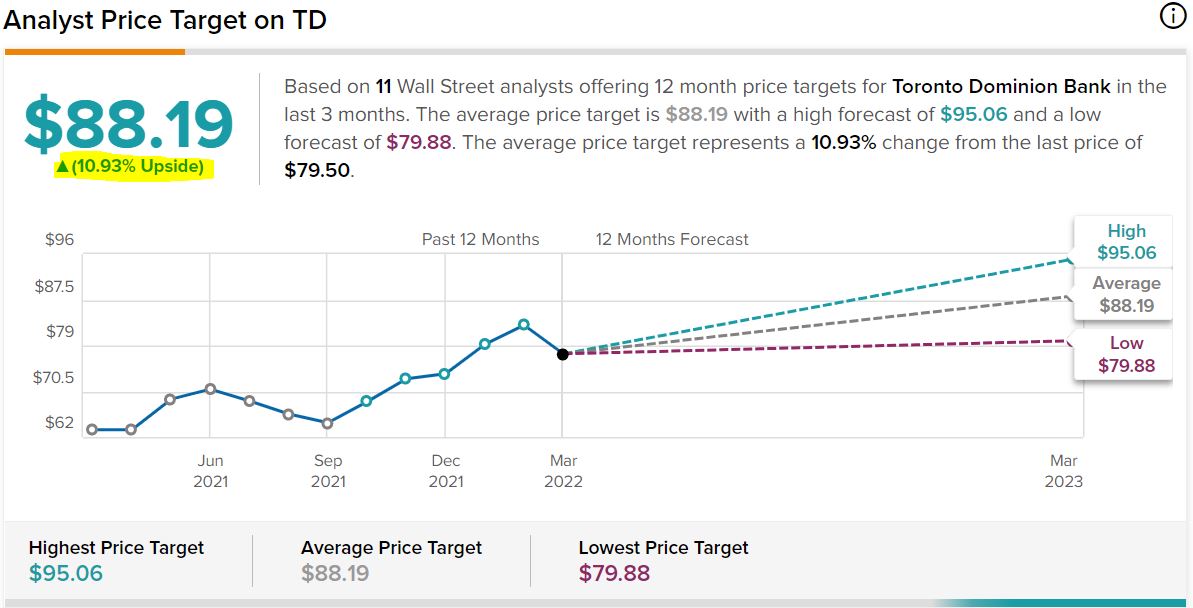 Because investing is always about the future, I like to look at analysts’ forecasts a few years down the line.

The yellow-highlighted area in the following image from FAST Graphs shows that analysts expect earnings to grow by 5% this year, 10% in 2023 and 18% in 2024. Meanwhile, the black-box section indicates that if TD continues to grow earnings at the pace of its normal 10-year P/E ratio (11.89), it would result in an 11.5% annual rate of return over the next three years. That’s very good for a conservative investment like a Canadian bank. 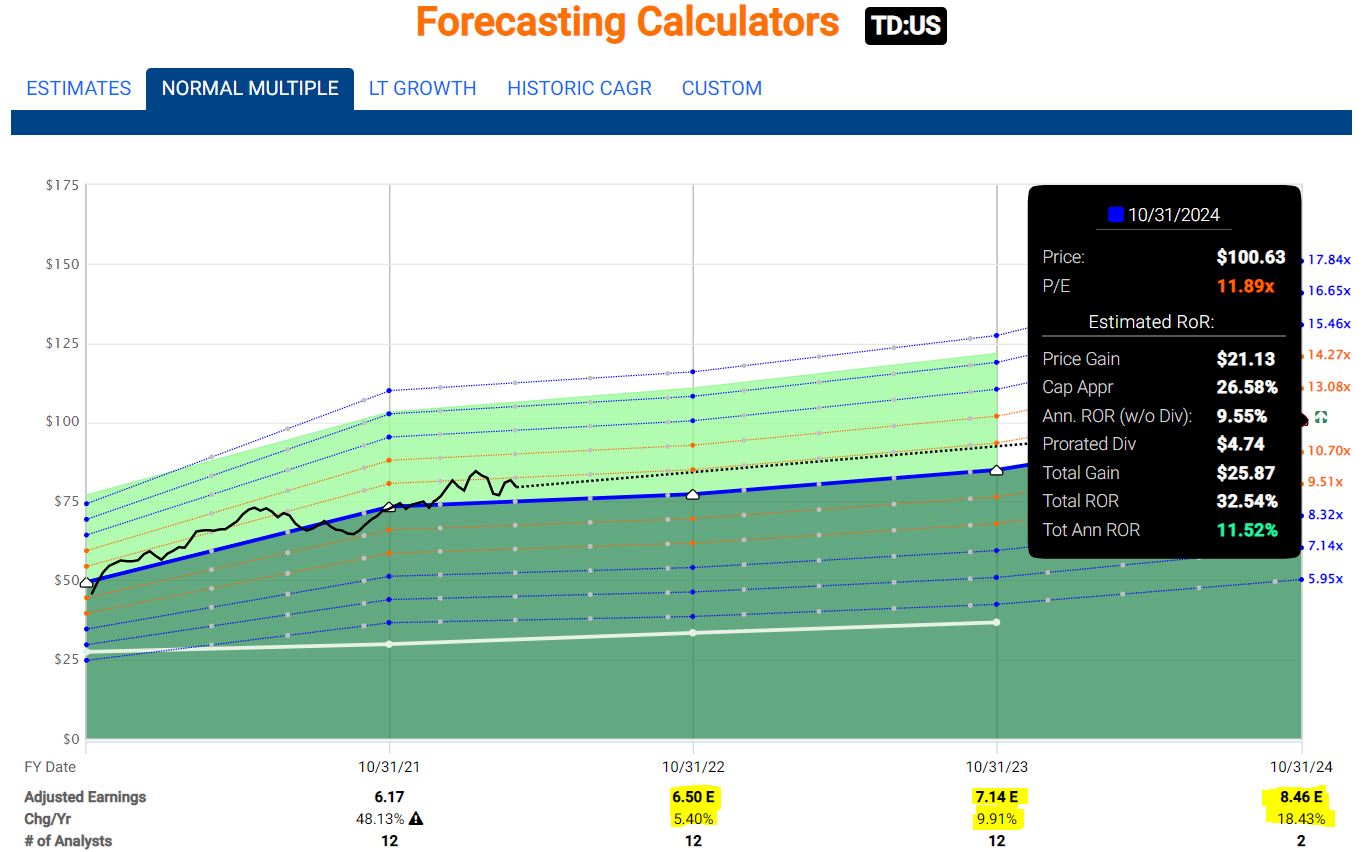 Whether it’s the kind of “growthier” stocks we’re buying for Jack and Logan in the Growth & Income Portfolio or the income-producing Canadian banks that we’re purchasing for Owen and Piper, establishing goals and investing for the long-term is always something to smile about.

NOTE: I also manage the Income Builder Portfolio for this site; check out the 46 stocks in that real-money project HERE. In addition, I do videos for the Dividends & Income Channel on YouTube; see my latest HERE.