I always encourage fellow investors to take analysts’ ratings in stride. After all, analysts are humans, like the rest of us, so they’re not perfect, either.

And yet, when I see that a stock I’m interested in has received an upgraded rating from an analyst I respect, I do take notice.

For example, when Morningstar just raised the “moat” rating of Sherwin-Williams (SHW) from “narrow” to “wide” – meaning that the analytical firm believes the world’s largest maker of paints and coatings has competitive economic advantages over its peers – I couldn’t help but say, “Hmmm.”

And when I was reminded that in 2021 Standard & Poor’s lifted Sherwin-Williams’ credit rating to BBB, solidly in the “investment grade” range, that also carried a little extra weight.

Ratings are OK, and upgrades are better, but as a Dividend Growth Investing proponent, I always like to be shown the money.

Although Sherwin-Williams is a low-yielder at just under 1%, it’s also a Dividend Aristocrat that delivers a nice raise every year. That’s the case again in 2022, as the company in February announced a 9.1% hike to its payout — its 44th consecutive year with an increase. 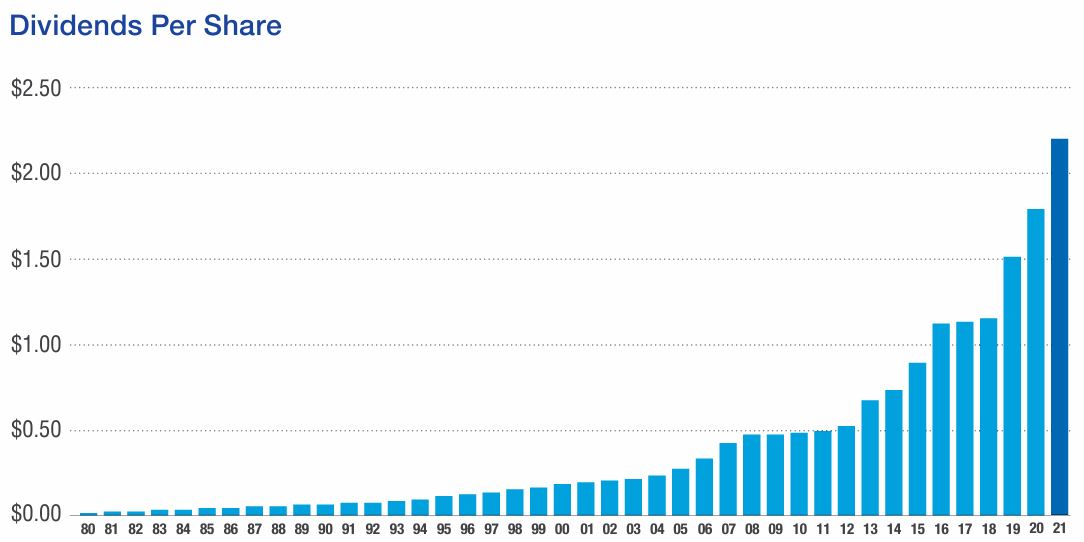 I conducted my due diligence on SHW as an investment candidate more than a year ago, which was when I first determined that we should buy it for our Income Builder Portfolio.

Nothing has changed since then to make me believe Sherwin-Williams is anything but the high-quality company it’s been for generations. Indeed, the upgraded ratings from Morningstar, Standard & Poor’s and others merely confirmed what I already believed to be true.

And now the combination of those quality scores, yet another dividend raise and a price decline has only made the company more attractive as an investment.

So we added to our SHW stake on Wednesday, March 30, when I executed a purchase order on behalf of this site’s co-founder (and IBP money man), Greg Patrick.

I used about half of Greg’s $1,000 semi-monthly allocation to buy two shares of Sherwin-Williams, and I divided the rest between two of the IBP’s smaller holdings — truck engine maker Cummins (CMI) and kitchen goods manufacturer Reynolds Consumer Products (REYN).

I’ll discuss CMI and REYN briefly in a bit, but this is mostly about the addition to our SHW position. So let’s review the company’s history and its current financial situation, and talk about why it might be a good candidate for investment.

Sherwin-Williams is no fly-by-night company. It’s been around since just after the Civil War, when it was established in Cleveland by Henry Sherwin and Edmund Williams. 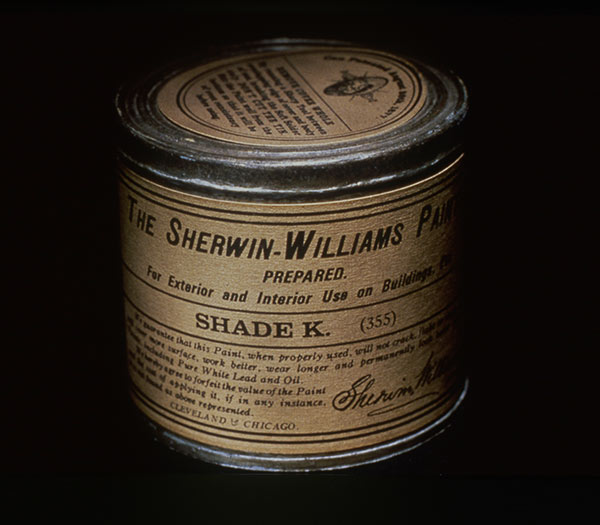 Within 40 years of its founding, Sherwin-Williams branched out into Canada, Australia, New Zealand, South Africa, India and China.

In 1928, the company introduced the first synthetic aviation coatings, used on some of the most historic flights of the 20th century, including Charles Lindbergh’s first nonstop solo flight across the Atlantic Ocean. 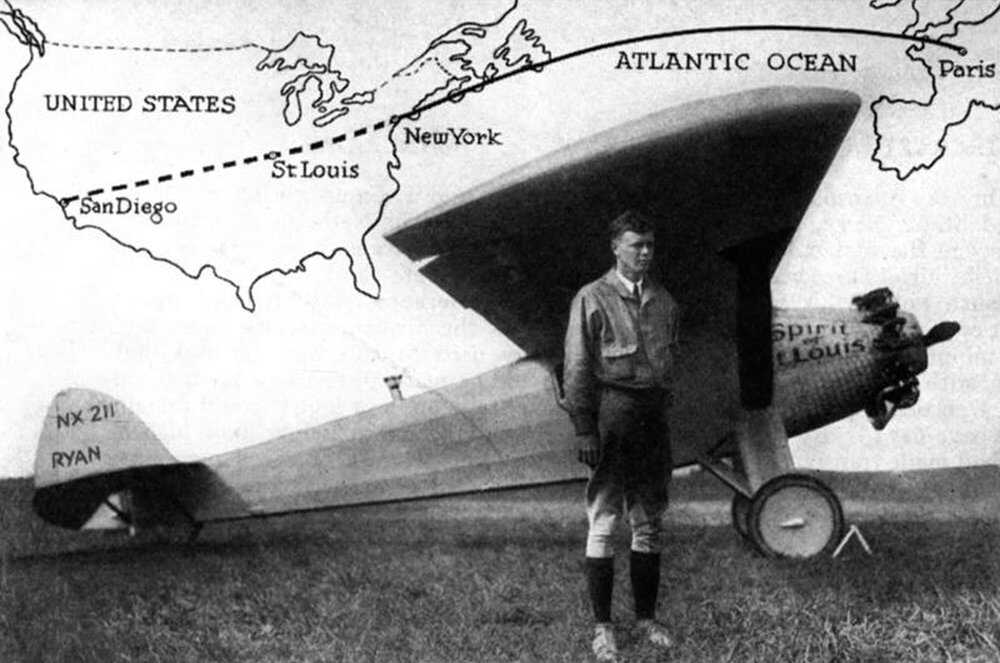 1941 was a big year of innovation, as Sherwin-Williams chemists created Kem-Tone, a fast-drying and washable water-based paint for household use, and introduced the Roller-Koater applicator. 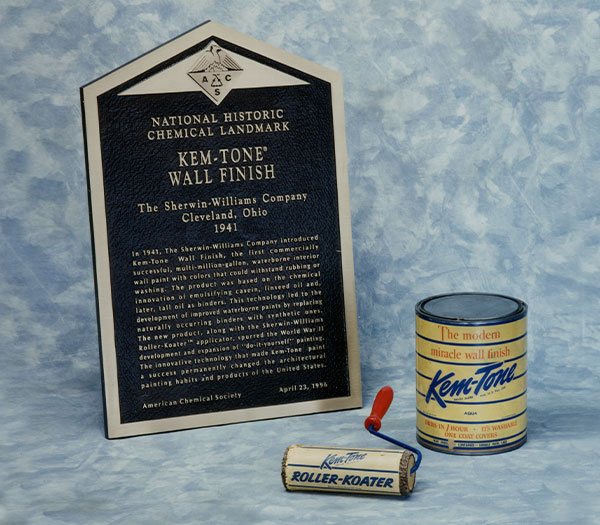 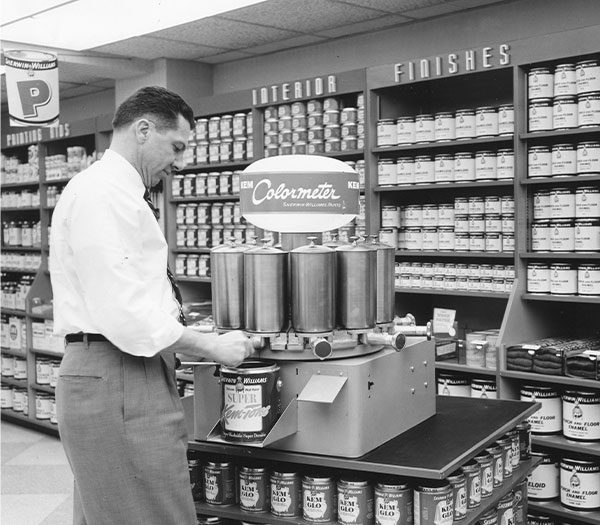 Two years later, the company developed the paint can shaker, which was used to help mix five-gallon containers so customers could buy paint in larger quantities. 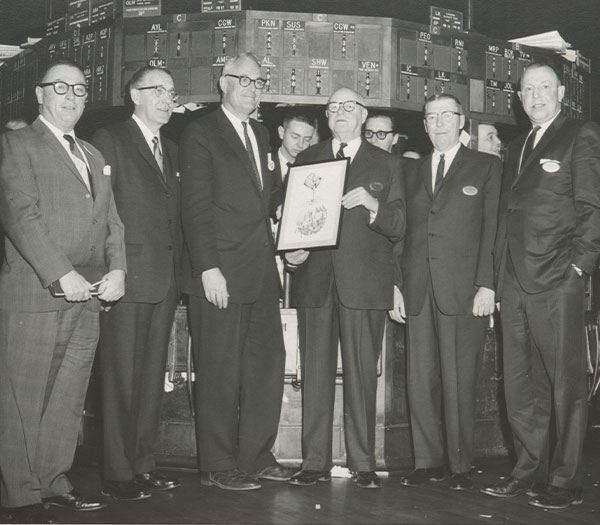 In 1994, Sherwin-Williams became an official sponsor of Major League Baseball and was the designated coatings supplier for several new ballparks, including Jacobs Field in the company’s hometown of Cleveland. 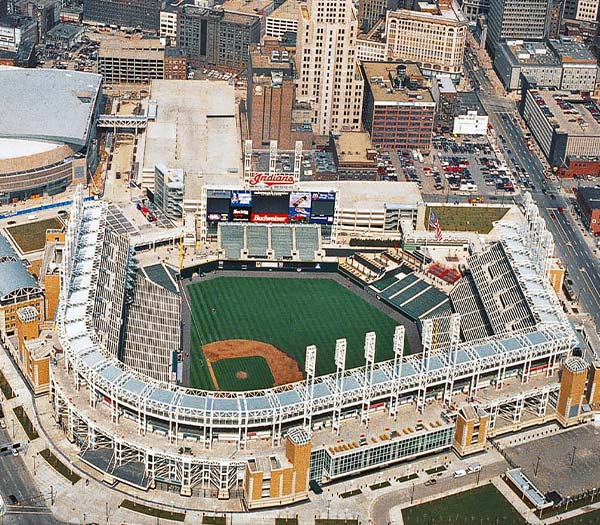 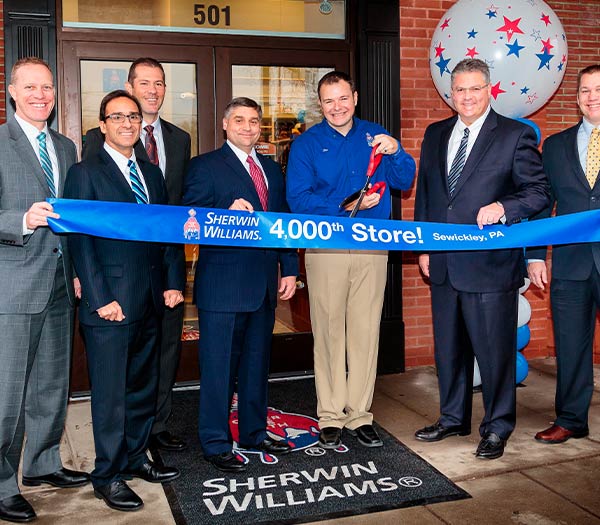 In 2017, the company finalized its largest acquisition ever, the $11.3 billion deal to buy rival Valspar, making Sherwin-Williams by far the largest player in its industry. Its $19 billion in sales in 2021 were some 30% greater than its closest competitor, and almost double those of the third-place company. 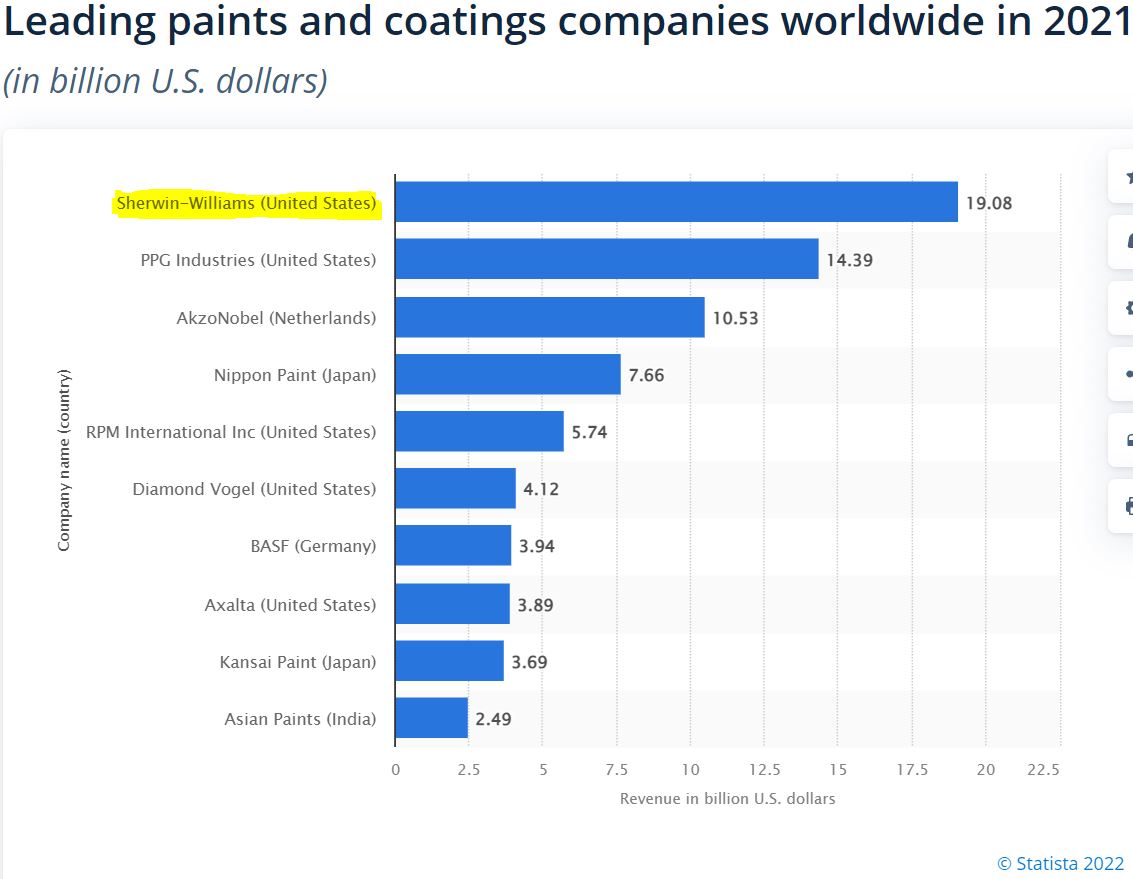 Here is Morningstar analyst Spencer Liberman’s description of why Sherwin-Williams is so successful:

Sherwin-Williams is the largest provider of architectural paint in the United States. The company has approximately 4,800 stores and sells premium paint at higher price points than most competitors. Sherwin-Williams also sells its products in big-box stores and provides coatings for original equipment manufacturers. More than three quarters of Sherwin’s business occurs in North America, with much of its international exposure acquired during the purchase of Valspar. The acquisition of Valspar has served to bolster its previously modest retail presence, as Valspar’s long-standing relationship with Lowe’s led to an exclusive partnership for Sherwin in 2018. Sherwin also obtained Valspar’s industrial business, expanding the firm’s performance coatings segment.

In Sherwin’s largest segment, the Americas group, it has maintained strong growth, even in developed markets, as it rolls out nearly 100 new stores each year throughout the Americas. Its strategic focus on building this segment has created a strong value proposition for contractors. Job-site delivery, in-app ordering, and a capacity for high-volume orders saves time for customers and allows for premium product pricing. Roughly 90% of sales in the Americas group are to professional painters with the remaining 10% to do-it-yourself consumers.

The consumer brands segment markets Sherwin’s paint brands through retail channels, such as Menards, and is the exclusive provider of coating products to Lowe’s. It owns a variety of widely known brands such as Valspar, Purdy, Minwax, Krylon, Thompson’s Waterseal and Dutch Boy. Its performance coatings business produces a diverse product mix and accounts for much of the firm’s global exposure. The segment sells everything from marine paints to airplane and fire-resistant coatings, many of which are custom formulated to suit client needs.

The company had its best sales record ever in 2021, and had monster return on equity of 51.6%. But some of its other categories — including income, return on sales and return on assets, fell below the figures from 2020, when the Covid-19 pandemic led to a significant uptick in stay-at-home projects.

Despite all it has going for it, Sherwin-Williams is not bulletproof. Although demand for the products remained strong in 2021, earnings were hurt by issues relating to commodities, supply chain, transportation, labor and the pandemic.

As a result, adjusted earnings for the 4th quarter of 2021 came in well below the company’s guidance and analysts’ estimates — a second straight quarter of 20%-plus declining income.

And regardless of what company we’re talking about, when earnings disappoint, it often leads to the stock price falling. 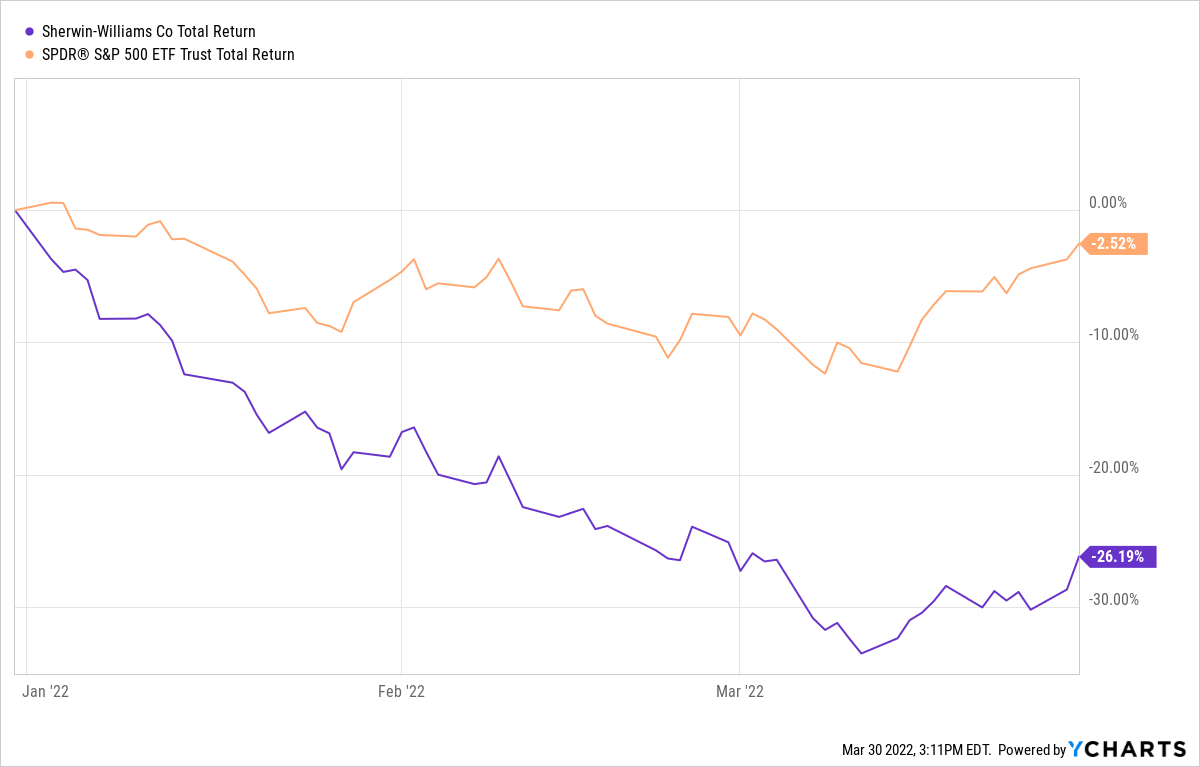 No doubt, part of that had to do with overvaluation. It you’re going to trade at 40 times expected forward earnings, as was the case a few months ago, you are priced for perfection. So when financial results aren’t perfect … down goes the price.

Even with the price drop — from $354 three months ago into the $250s now — Sherwin-Williams still isn’t exactly a bargain, as it trades at about 27 times projected 2022 earnings.

The stock, however, has been trading at a premium valuation for years. The blue line on the following FAST Graphs image represents the company’s 10-year normal P/E ratio of 26. The black price line shows how far overvalued SHW became during 2021 but how close the price now is to the normal valuation. 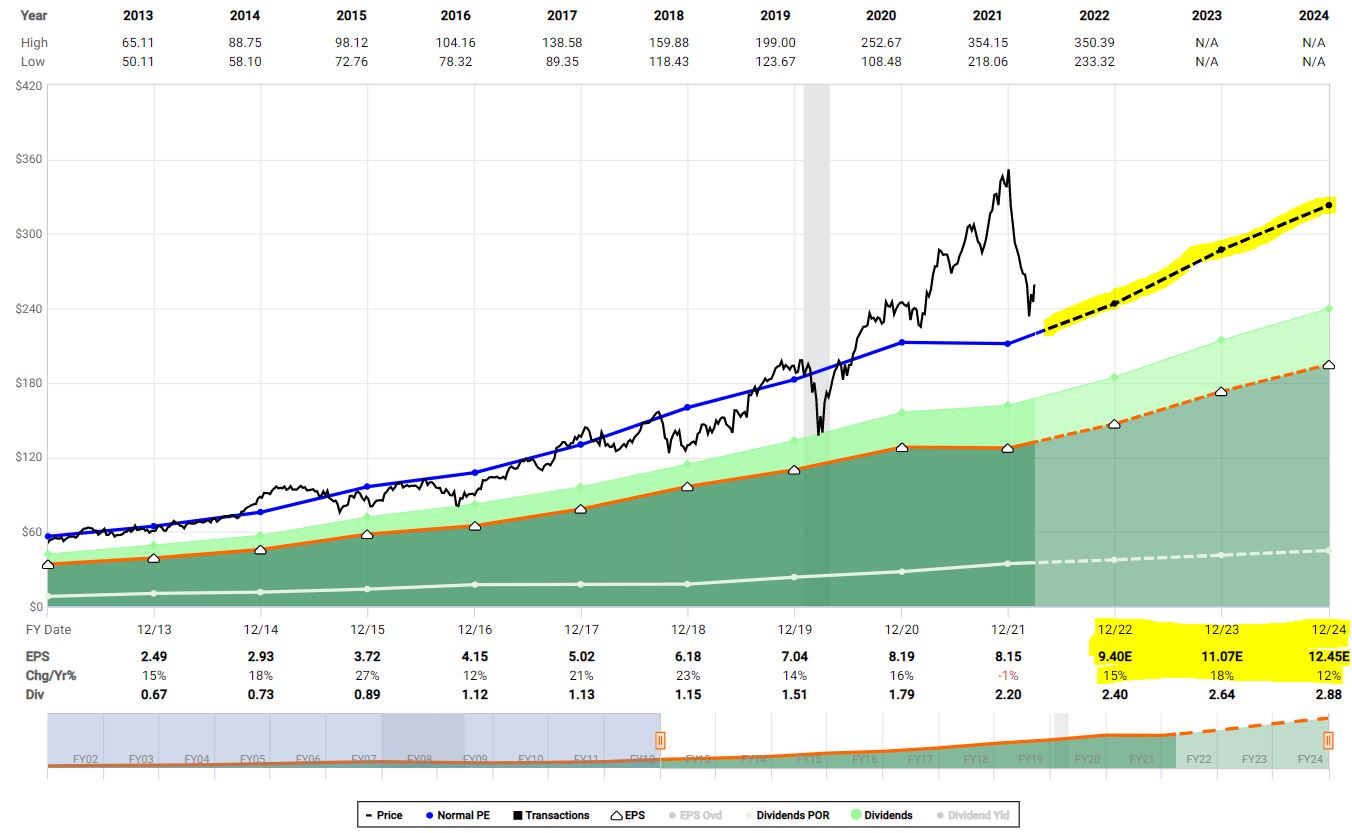 The average 12-month target price of the 17 analysts monitored by TipRanks is $329 — representing a 30% upside. Even the lowest target of $275 is well higher than the current price. 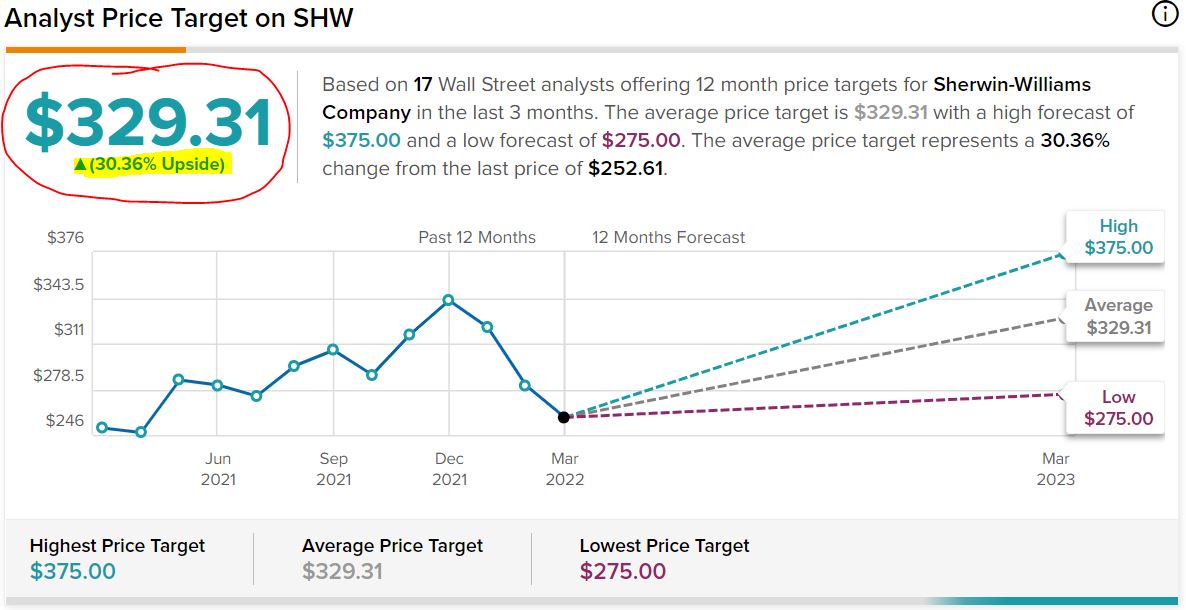 The situation is similar for the 20 analysts monitored by Refinitiv, with a $321 average target price and 28% upside.

Morningstar just raised its fair value estimate 33% … but as much as the analytical firm crows about the company’s moat, capital allocation and other quality-related traits, Morningstar still only values SHW stock at $195/share. 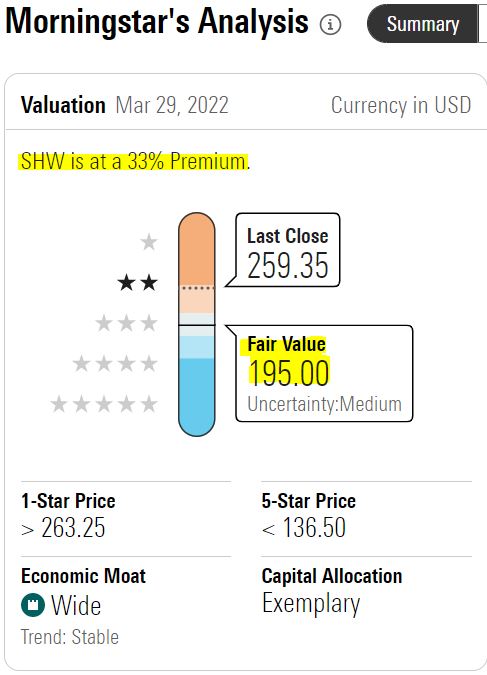 It’s worth noting that Morningstar’s analysts usually have placed a lower valuation on SHW than many others have. As a result, they missed the huge price run-up of the past several years.

Dividends Are Our Friends

Because positions in both Reynolds and Cummins were added to the Income Builder Portfolio fairly recently, I will refer readers to the articles I wrote on each — Reynolds HERE; and Cummins HERE.

Reynolds is at a similar price to what we initially paid for it, and Cummins actually has pulled back some since our August buy; I believe both REYN and CMI offer appealing value for those interested in the companies.

Along with Sherwin-Williams — the “growthiest” of the three stocks — we’re talking about very different companies here. Some of those differences can be seen in the income-related profiles offered by Simply Safe Dividends.

At 3.2%, REYN has the highest yield but little history to show because it only began trading as a stand-alone company two years ago. SHW easily has the longest streak of dividend growth (SSD only includes full years) and the best recent growth. CMI has a nice combination of several metrics, with a yield just under 3%, great dividend safety, a mid-teens growth streak and high long-term dividend growth.

The “Annual Income” column reflects what each position is projected to generate this year within the IBP. The $112 total is only about 3% of the portfolio’s expected $3,600-plus income production. I look at Sherwin-Williams as a growth company, viewing the dividend as a nice little bonus.

The valuation section of this article goes back to what I talked about in the early paragraphs: What do you want to take from each analyst (if anything) when making the very personal decision of where your investment dollars will go?

Sherwin-Williams is nowhere near “cheap,” but most analysts nonetheless rate it a buy. Meanwhile, Cummins and Reynolds are very different alternatives to consider. It’s up to each investor to conduct his or her own due diligence before buying any stock.

On the Income Builder Portfolio homepage — HERE — we provide a table with all 46 positions, as well as links to every IBP-related article I’ve written since the project’s inception in 2018.

I also manage the Growth & Income Portfolio for this site; see it HERE. In addition, I regularly make videos for our Dividends And Income channel on YouTube; view the latest — on McDonald’s (MCD), Starbucks (SBUX), Philip Morris (PM) and Constellation Brands (STZ) — HERE.