As I contemplated my first March selections for our Income Builder Portfolio, I mostly saw a sea of red. Russia waging war on Ukraine has roiled the stock market, and it especially has affected companies that have exposure to the region.

Sure, there have been been a few pockets of green since the aggression began a couple weeks ago, such as our holdings in the weapons-making industry — Northrop Grumman (NOC), Lockheed Martin (LMT) and General Dynamics (GD). 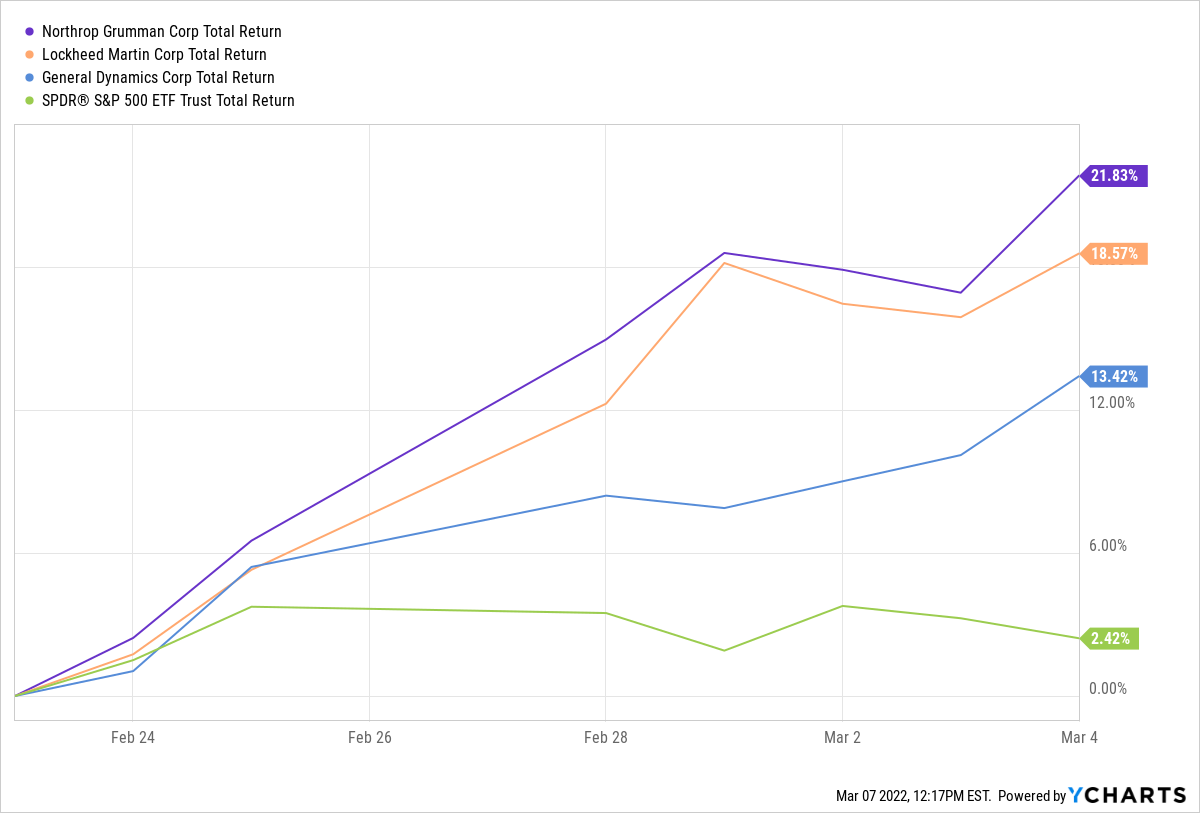 I didn’t want to buy more stocks that have had big price run-ups, however, so I asked myself: When the world looks like it’s going to h-e-double-hockey-sticks, where do folks turn?

And, continuing my conversation with myself (because nobody else listens to my nonsense), I answered: They often go to products that please them – many of which, let’s face it, aren’t good for them.

I’m talking about stuff like nicotine and caffeine and fatty foods and booze.

And so, on March 7, I divided the $1,000 semi-monthly allocation from this site’s co-founder, Greg Patrick, between four of the IBP’s “sinful comfort stocks” — Philip Morris International (PM), Starbucks (SBUX), McDonald’s (MCD) and Constellation Brands (STZ).

Even though the four have only a little exposure (relative to their overall balance sheets) to Russia and/or eastern Europe, each has seen investors dump shares en masse.

That, combined with general market jitters due to inflation, interest rates and other macro factors, has led to some pretty big price drops in recent weeks. 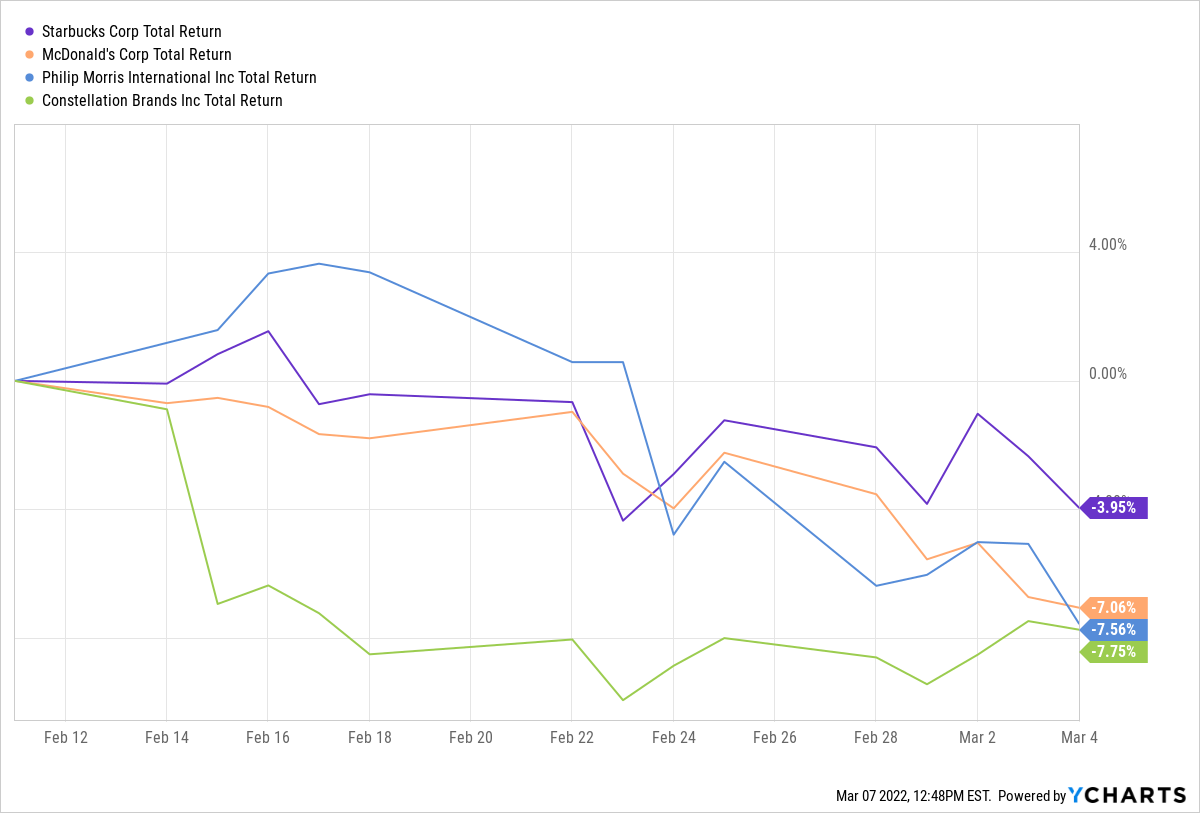 We can’t yet know what the final result of the fighting will be, nor can we know how it ultimately will impact the bottom lines of companies like Philip Morris, Starbucks, McDonald’s and Constellation.

But let’s remember that Dividend Growth Investing is a long-term strategy that rewards shareholders of high-quality, proven companies over time. A year or three or five from now, I doubt we will have regretted these small, add-on buys to our PM, SBUX, MCD and STZ positions.

One thing for sure: These are four wide-moat businesses, meaning they have significant competitive economic advantages over their peers. They score well in other quality-related categories, too.

I’ll get into dividend and valuation information in a bit. First, let’s take a quick look at each of these four companies.

PMI is the global leader in cigarettes, with brands like Marlboro having achieved iconic status. Led by its IQOS heated-tobacco system, the company also is No. 1 in non-cigarette nicotine products.

Indeed, the company is in the midst of a multi-year transition away from cigarettes, even creating a logo that includes the promise of a “smoke-free future.”

At the recent Consumer Analyst Group of New York Conference, Philip Morris presented an update showing the progress toward the company’s stated goal of receiving half of its revenues from products other than cigarettes by 2025. 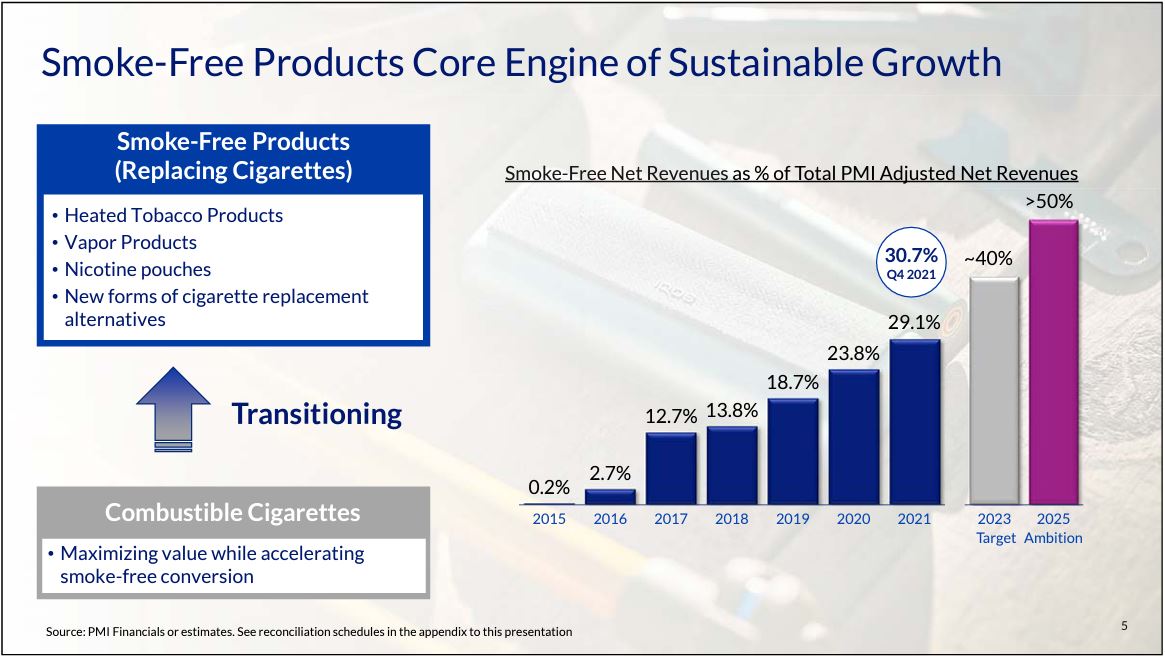 In 2021, some 29% of net revenues came from smoke-free products, more than twice as much as just three years earlier.

It’s quite a transition for a company that has made billions upon billions of dollars over the decades selling “cancer sticks” to customers — and that insisted for many of those decades that their cigarettes weren’t unhealthy.

Philip Morris is the international company that was spun off in 2008 from the corporation now called Altria (MO), which sells its products in the United States.

So while MO actually has benefited from the “flight to safety” during the Russia-Ukraine war, PM has been hit pretty hard. 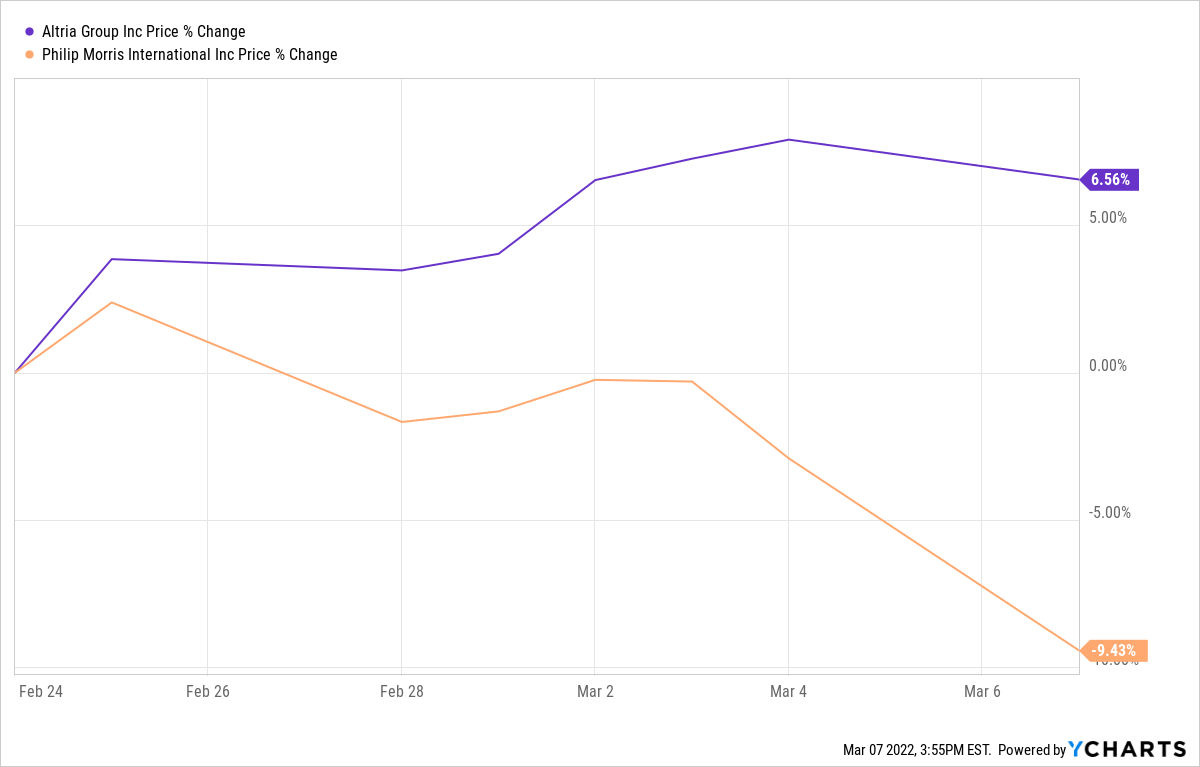 “The recent tensions in Ukraine have clouded PMI’s ability to achieve its near- and medium-term … targets, with Russia and Ukraine accounting for 23% of its (heated tobacco unit) volume. Although the medium-term growth algorithm remains robust, driven by the highly attractive economics of (heated tobacco products) and an un-stretched balance sheet provides buyback support, external factors will prove too difficult to overcome.”

Despite all that, the same analysts assigned a 12-month target price of $110 — suggesting a 17.3% upside from the price we paid for the 3 shares we bought Monday.

Without rough headwinds beating down the price, Philip Morris wouldn’t be so attractively valued now.

Similarly, back in May 2020, we bought almost $1,000 worth of PM after the price had been knocked down to $73/share during the depths of the COVID-19 pandemic. Read the article I wrote back then — HERE.

I’m not a coffee drinker, but my wife is … and she loves Starbucks, the world’s largest specialty coffee chain. Active in their loyalty program, she treats herself to one of their expensive drinks several times a month.

Anecdotes like that, of course, are worth a hill of (coffee) beans when talking about investing. After all, there are plenty of people who think Starbucks charges too much for their products or who simply prefer the taste of other brands.

So I’ll turn it over to Morningstar analyst Sean Dunlop to explain the appeal of SBUX stock:

The firm’s attention to premium-quality coffee distinguishes it from chained competitors … allowing Starbucks to charge substantially higher prices while creating a buzz around what has historically been a commoditized product.

While the sub-industry has attracted significant competitive attention, Starbucks’ premium positioning has allowed the firm to outflank competitors, leveraging its brand to raise prices 6.8% annually in the U.S. over the last five years, healthily in excess of category inflation. …

The firm’s ongoing investments in its loyalty program, with nearly 25 million active users in the U.S. at year-end fiscal 2021, should resonate with an audience that has grown increasingly amenable to digital ordering, with more than half of order volume now driven by program participants.

We continue to believe that Starbucks remains a compelling long-term “growth at scale” story, with our forecast anticipating average top-line growth of 10% through 2026 and adjusted EPS growth averaging 10.8% in our base-case scenario.

Only a fraction of a percent of Starbucks’ business comes from Russia. And even Europe doesn’t account for a large percentage of sales — about 5%.

Nevertheless, concerns that Russia’s aggression could fuel even higher inflation have made it legitimate to wonder if cash-strapped consumers will sacrifice their $7 lattes so they can feed their families and put gasoline in their cars.

SBUX stock had crushed the S&P 500 Index in total return during the 10-year period ending Dec. 31, 2021. But since then, a variety of issues — inflation, the pandemic, unionizing at some stores, commodity prices, a falling overall market, and now Russia — have conspired to knock about 28% off the price this year. 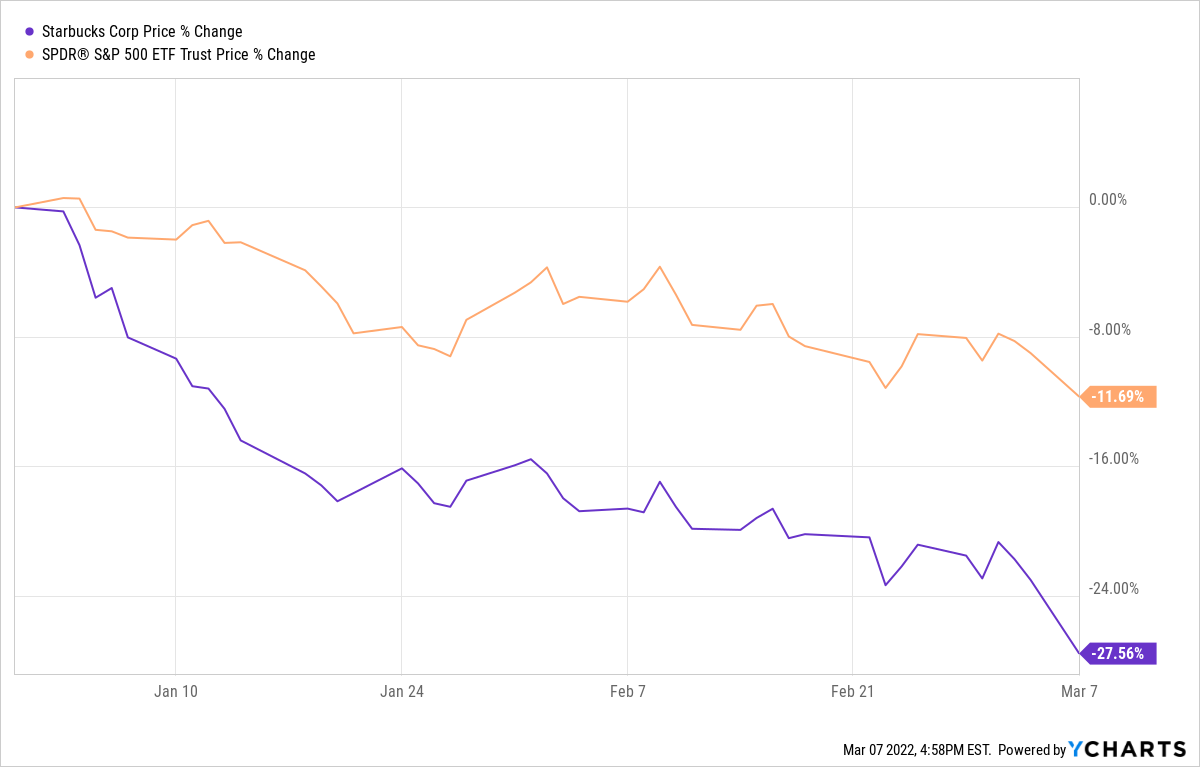 Like its coffee, SBUX stock tends to carry a premium price, so getting a little more for the IBP at about 22 times projected 2023 earnings seemed like a pretty good idea.

I haven’t had a full write-up about Starbucks in quite some time, but my colleague Jason Fieber profiled the company last month. Read his account HERE.

The world’s largest restaurant chain was rolling along well into this year, with many analysts raising their target prices after a Jan. 27 earnings call that revealed good news about same-store sales and operating income data.

Credit Suisse, for example, lifted its 12-month target to $285, saying:

MCD’s defensive, heavily franchised business model, global scale and healthy franchisees are particularly attractive amidst elevated costs and a challenging operating environment. We like MCD’s strong value position in 2022 and what appears to be increasing competitive behavior, and there is still a recovery story in international markets. At current valuation, we believe MCD offers a compelling risk/reward.

Once Russia started its saber-rattling, though, MCD lost steam.

Although that country accounts for only 2% of McDonald’s systemwide sales, there is concern that the war will make already significant inflation even worse in Europe — which accounts for about a quarter of the company’s sales. 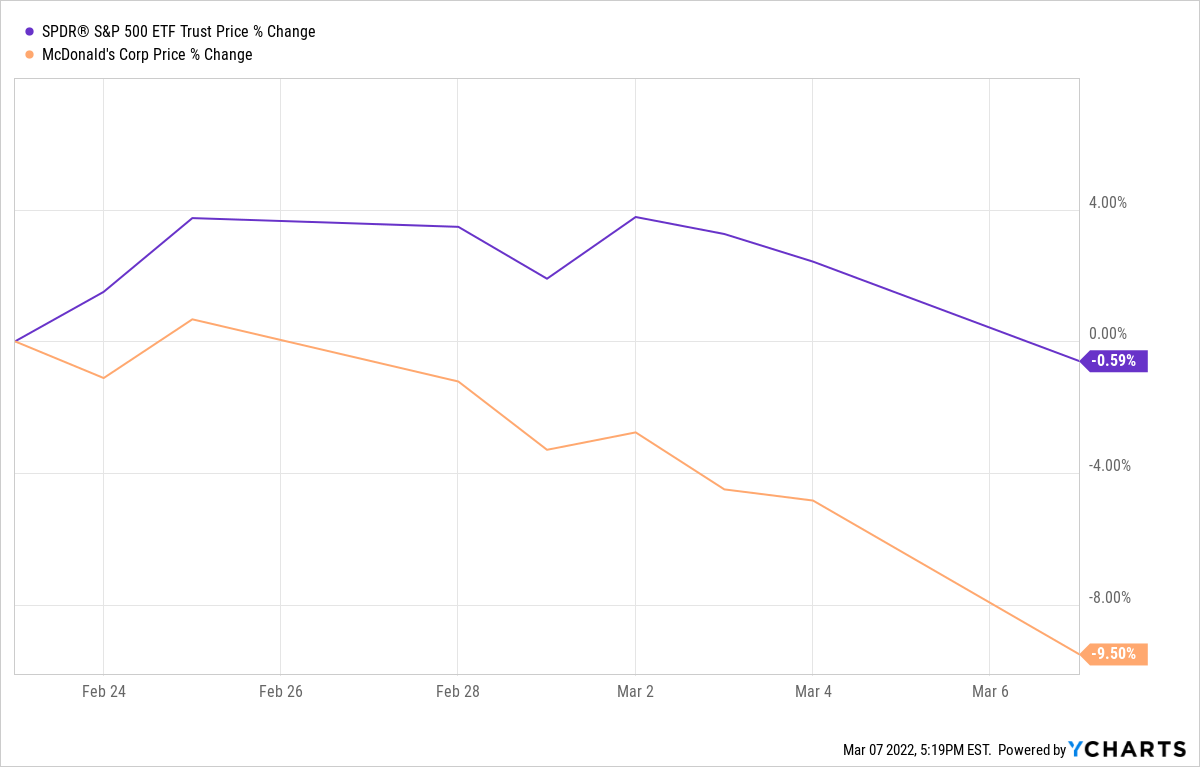 So as was the case with Philip Morris and Starbucks, this is an opportunity to get McDonald’s stock quite a bit cheaper.

My last full write-up on McDonald’s can be seen HERE.

This name isn’t as recognizable as the first three companies in this article, but that doesn’t mean Constellation Brands isn’t a major player as a corporation and a stock.

For one thing, it markets some of the world’s most popular beer brands: Corona, Modelo and Pacifico. 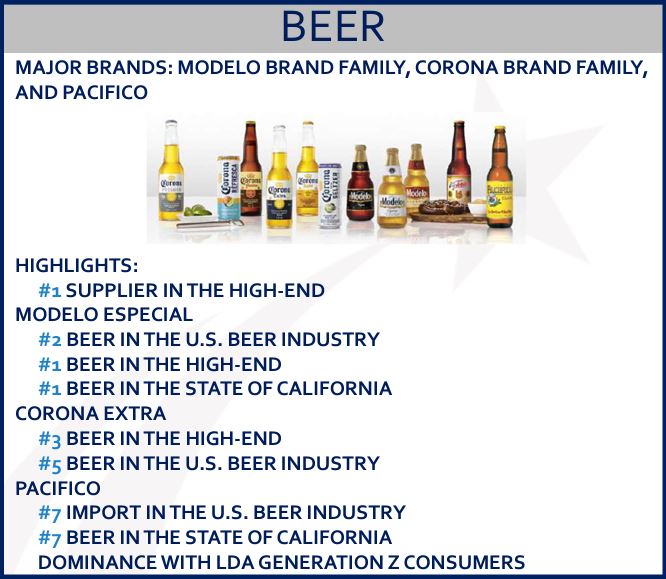 Constellation Brands also sells wines and spirits, and it’s the No. 9 alcoholic beverages company in the world. 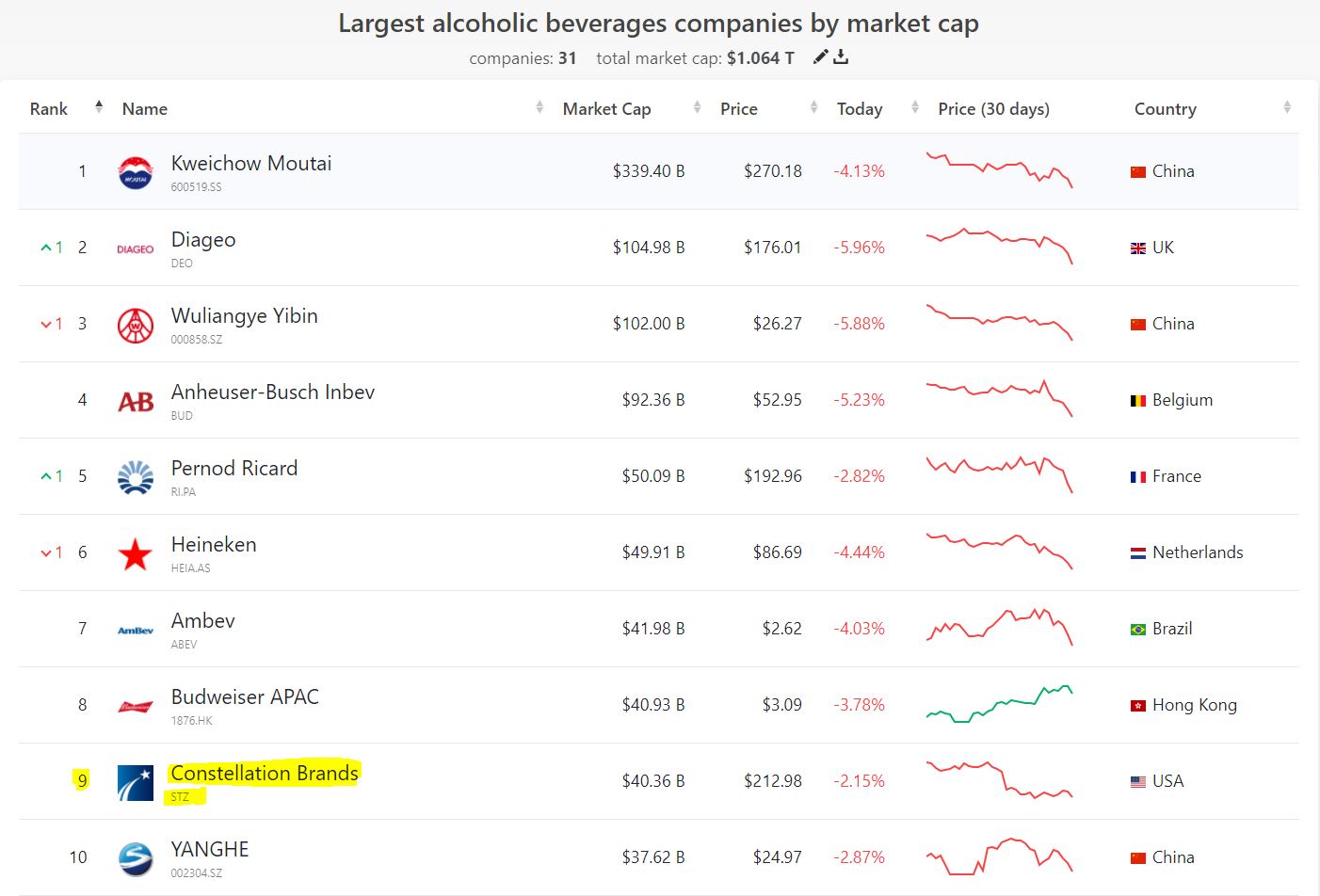 The company has grown nicely over the years, and even has a stake in the cannibis industry.

From the bottom of the pandemic plunge (March 23, 2020) through mid-February of this year, its stock posted 130% total return, soundly beating the S&P 500 Index. But like the other companies we bought Monday, STZ has pulled back recently — down about 8% since Feb. 14. 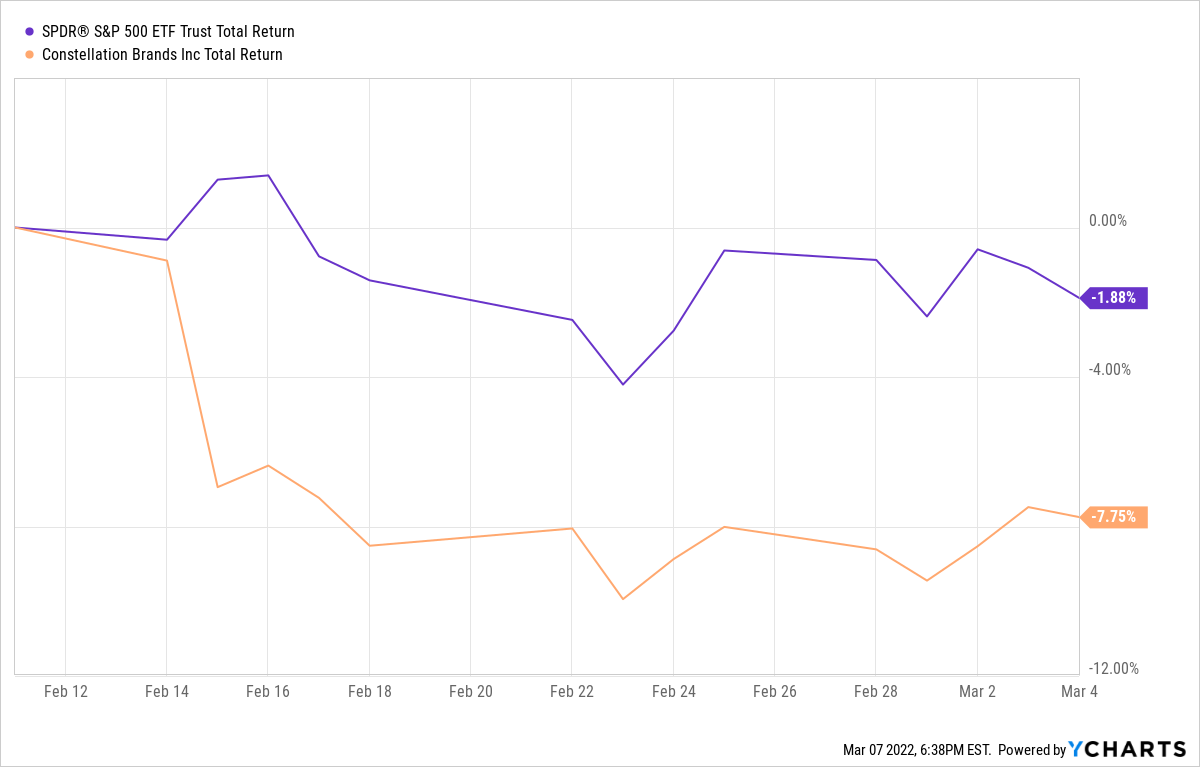 Unlike the others, however, the Russia-Ukraine situation doesn’t have much to do with the decline. It was reported on Feb. 14 that Constellation Brands might make a huge offer for Monster Beverage (MNST), a leader in the burgeoning energy-drink business.

Investors often have negative reactions to potential mega-deals because they fear larger debt loads and difficulty in combining two major (and in this case, different) businesses. We’ll see if the deal actually happens.

Philip Morris, McDonald’s, Starbucks and Constellation Brands have been growing their dividends for several years, with MCD’s 46-year streak putting it solidly among the Dividend Aristocrats.

Here is some other income-related information about these four companies:

Constellation’s 19% dividend growth rate over the last 5 years is deceptive; the company has barely moved its dividend at all the last 3 years after having made a few enormous raises.

Safety ratings use the 1-to-100 scale of Simply Safe Dividends. All four companies fall in the 61-80 range that SSD calls “safe,” indicating that a cut is unlikely.

Following Monday’s buy, Philip Morris became the IBP’s second-leading income producer, with its $188.63 in projected annual dividends trailing only the $195.59 of AbbVie (ABBV). The combined $363.50 the four companies are expected to generate represents about 10% of the portfolio’s total annual income stream.

As I suggested in the profiles of each company, the recent pullback has made all of them relatively appealing from a valuation standpoint … and most analysts seem to agree.

I’m glad the Income Builder Portfolio owns these four high-quality businesses, and it was nice to be able to add to our positions at better price points.

Having said that … here’s something I can’t stress enough:

Before you start buying any of these companies, realize that most of the above estimates were put in place before the analysts were able to consider what Russia’s war against Ukraine might do to earnings, revenue or margins.

If, after conducting your own thorough due diligence, you are interested in any of the stocks, be sure to build in a margin of safety when determining the price you’re willing to pay.

To see all 46 positions we own, as well as links to every IBP article I’ve written these last 4+ years, check out the home page — HERE.

I also manage the Growth & Income Portfolio for this site, and that can be seen — HERE.

And finally, I regularly do videos for our Dividends And Income Channel on YouTube. See my most recent one — HERE.