During the early years of Saturday Night Live, the great Gilda Radner created a character named Roseanne Roseannadanna. The frizzy-haired social commentator would join fake-news anchor Jane Curtin on the SNL “Weekend Update” set, and she’d launch into a hilarious diatribe about an issue or person or product that was bugging her. 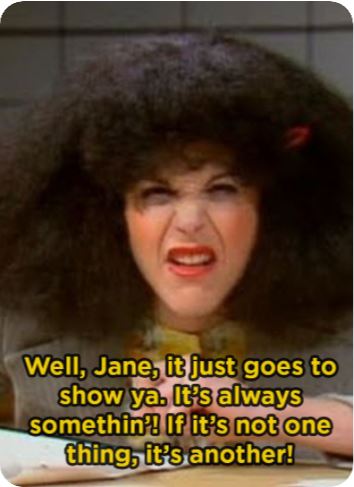 That phrase works well for investing, too. As Roseanne Roseannadanna also liked to say in amplifying her thoughts: “If it’s not one thing, it’s another.”

Lately, we investors have had lots of somethin’s to process. If it’s not the COVID-19 pandemic, it’s inflation; if it’s not supply-chain concerns, it’s the Fed raising interest rates. Most recently, of course, it’s been Russia’s invasion of Ukraine. 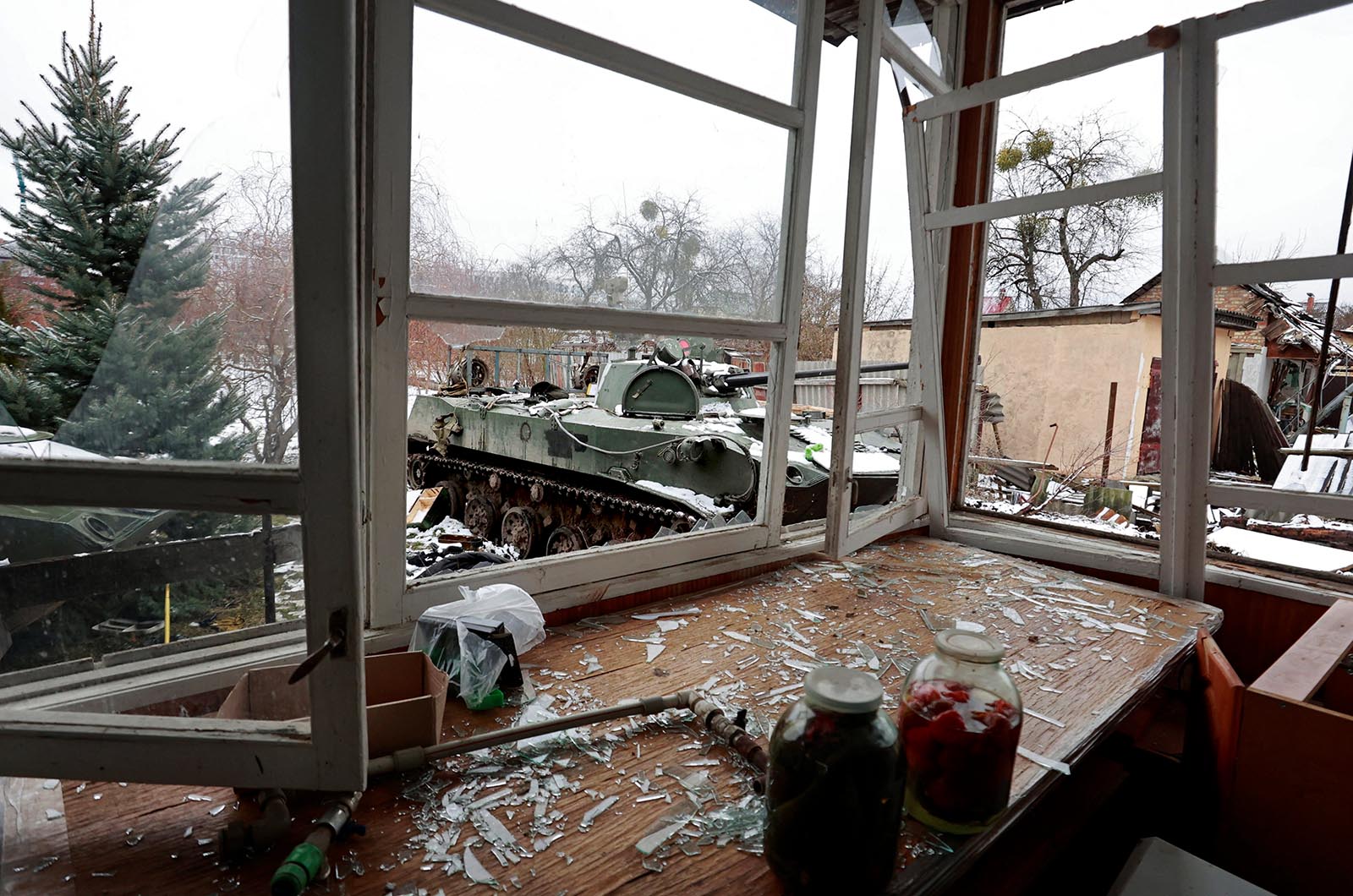 Destroyed armored vehicles are seen through broken windows of a house, as Russia’s invasion of Ukraine continues, in the town of Bucha in the Kyiv region, Ukraine, March 1, 2022. REUTERS/Serhii Nuzhnenko

People are dying, misery is spreading and the world order is under attack, so I don’t want to trivialize the conflict in eastern Europe by making it about our ability to grow our portfolios.

But this is an investing website and facts are facts … and the fact is that Russia’s attempt to take over Ukraine also has roiled the stock market.

The S&P 500 Index was down about 8% during the first two months of 2022. Since hitting its all-time high the first week of January, my portfolio (which is more defensive than the index) has suffered a total-return decline of around 3%. And the two real-money projects I manage for this site — the Growth & Income Portfolio and the Income Builder Portfolio — also are down.

So how low can the market go? How long will it take to recover? Anybody who claims to know the answer to either question is just guessing.

Here’s one thing we can be pretty sure of, however: No matter how much it loses, the market inevitably will recover. It always does.

LPL Research, which conducts studies to help financial professionals advise their clients, provided an interesting list of how the market reacted to major world events over the decades.

For example, the LPL Research list shows that the 1962 Cuban Missile Crisis resulted in a 0.3% one-day loss for the S&P 500 Index and an 6.6% total drawdown; it took 8 days for the index to reach a bottom and 18 days for the market to recover.

In other words, less than 3 weeks after a standoff that could have resulted in the incineration of the planet, the stock market was back to where it had been before the crisis.

Beyond that, as the following LPL Research table shows, the index was up 5.1% a month after the crisis passed and 27.8% a year later. 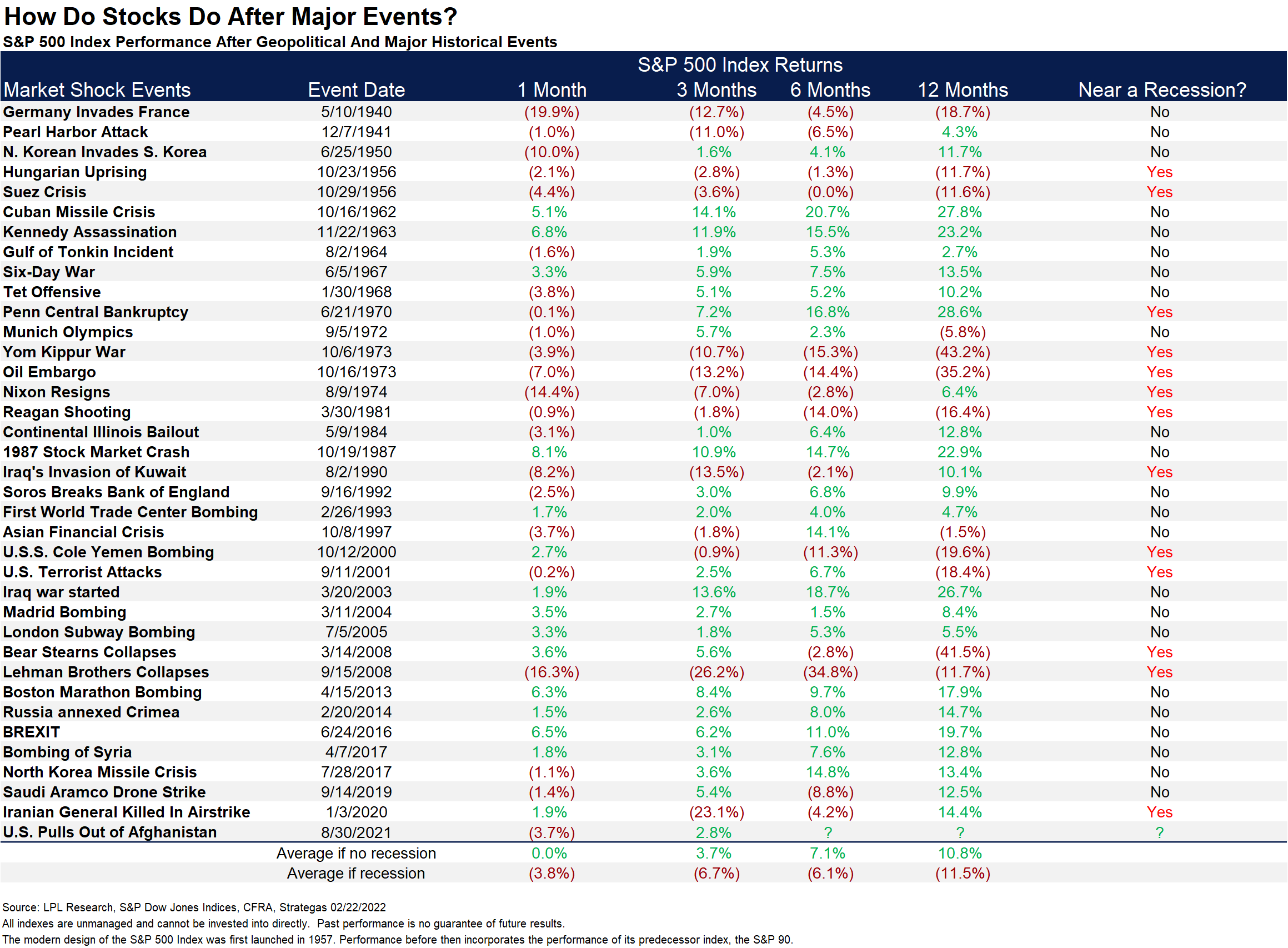 Overall, according to averages gleaned from both tables, there was a 1.1% market drop on the first day of the events, a 4.6% total drawdown, and a 1-year gain of 10.8% (if there was no recession taking place at the time). On average, it took 20 days until the market bottomed, and 43 days until recovery.

Again, I realize the coldness of those numbers, but I thought they were important to present now that the market is getting hammered repeatedly — which might make some folks wonder if it’s worth it to invest at all.

One way or another, this crisis will end … and the stock market will not just rebound but move higher, as it always does. 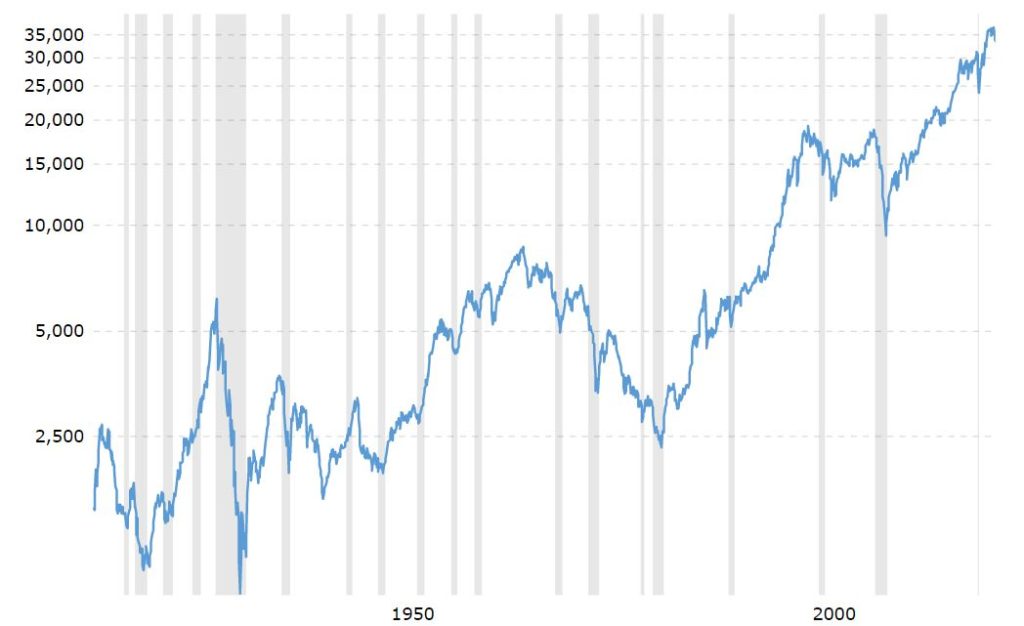 Investing in stocks — whether through individual equities, mutual funds or exchange-traded funds — is the most accessible way most of us have to build wealth.

As an investor, I’ve looked at the market decline as an opportunity to build up positions in quality companies in both my personal and public portfolios.

In February, for instance, I added to the Growth & Income Portfolio’s holdings in Nike (NKE), Apple (AAPL) and Constellation Brands (STZ).

Since launching the GIP in June 2020, I’ve been making monthly investments as I slowly build a fund that eventually will help pay for the college educations of my now 2 1/2-year-old grand-twins, Jack and Logan. 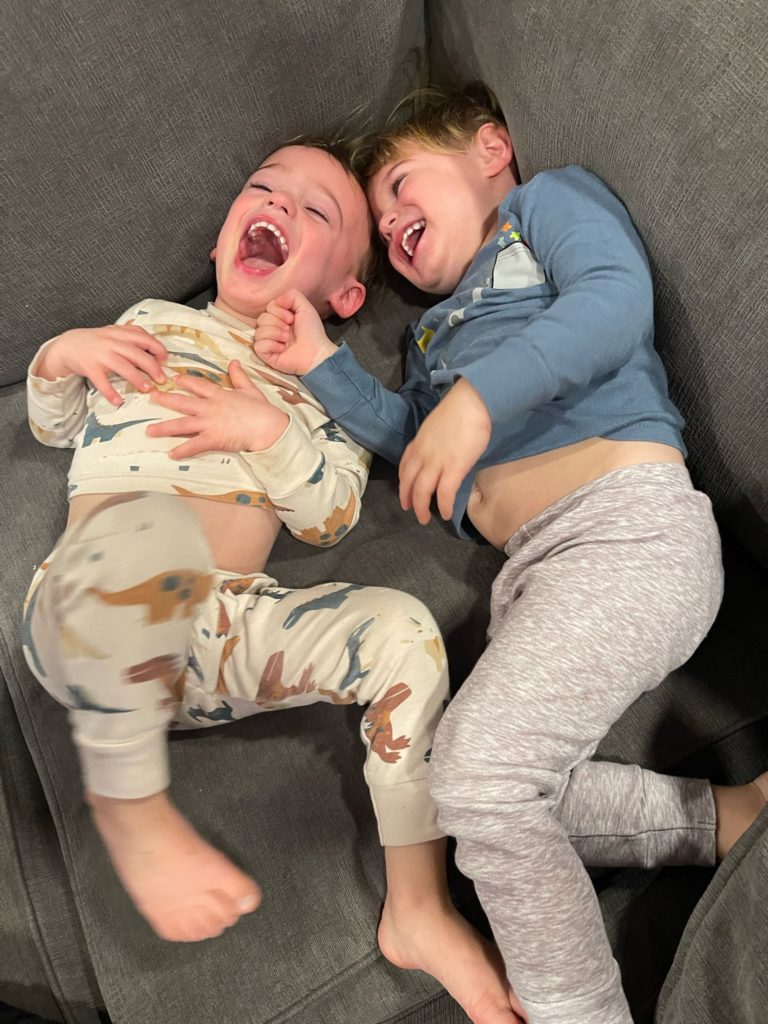 The GIP has 18 positions, and it was worth about $4,600 at the end of February. It experienced 17% total return from inception through Feb. 28.

The following table is updated regularly. See it, along with links to every GIP-related article I’ve written, on the portfolio’s home page — HERE. 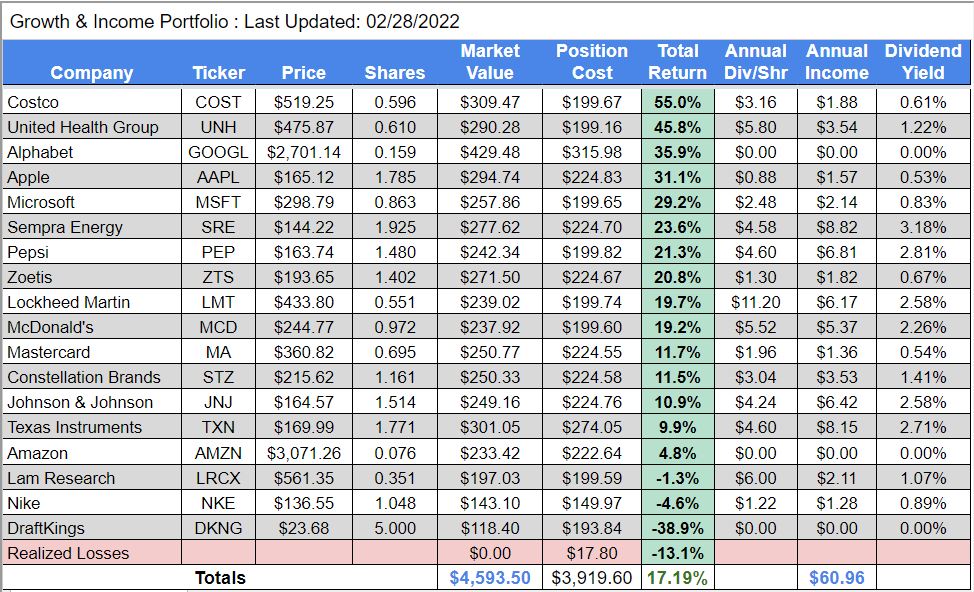 February was yet another down month for both the Growth & Income Portfolio and the overall market. After roughly matching the 5% decline of the S&P 500 Index in January, the GIP fared better than the index (which lost about 3%) in February.

The only holdings I added to in February were Nike, Apple and Constellation Brands. The following table shows the combined 1% loss for the other 15 positions. 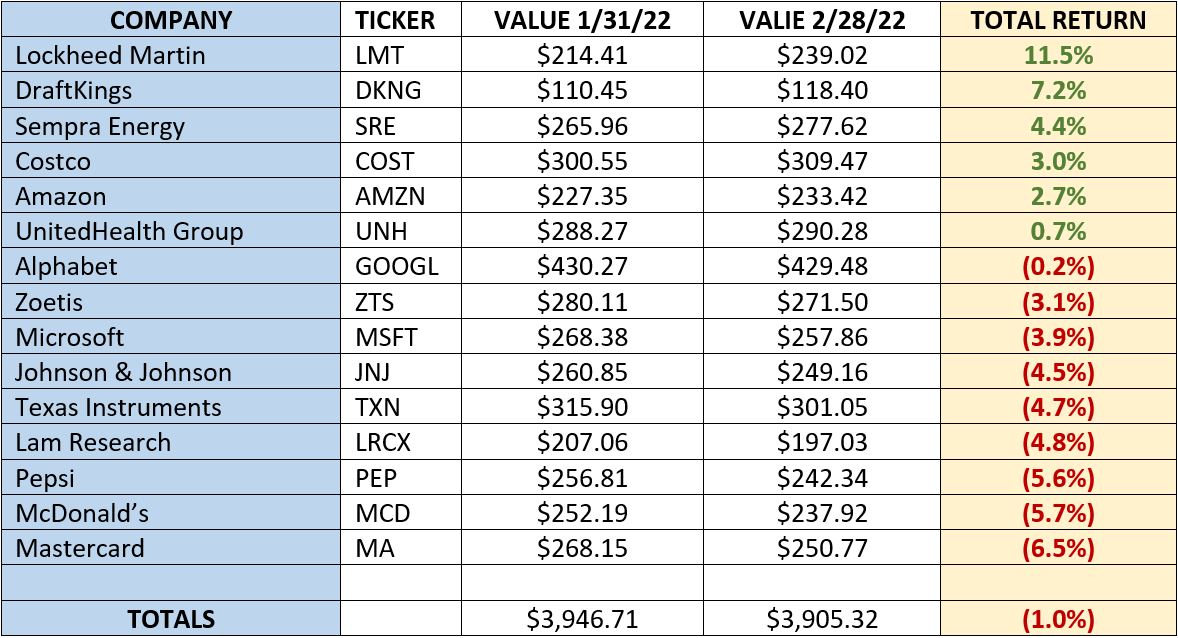 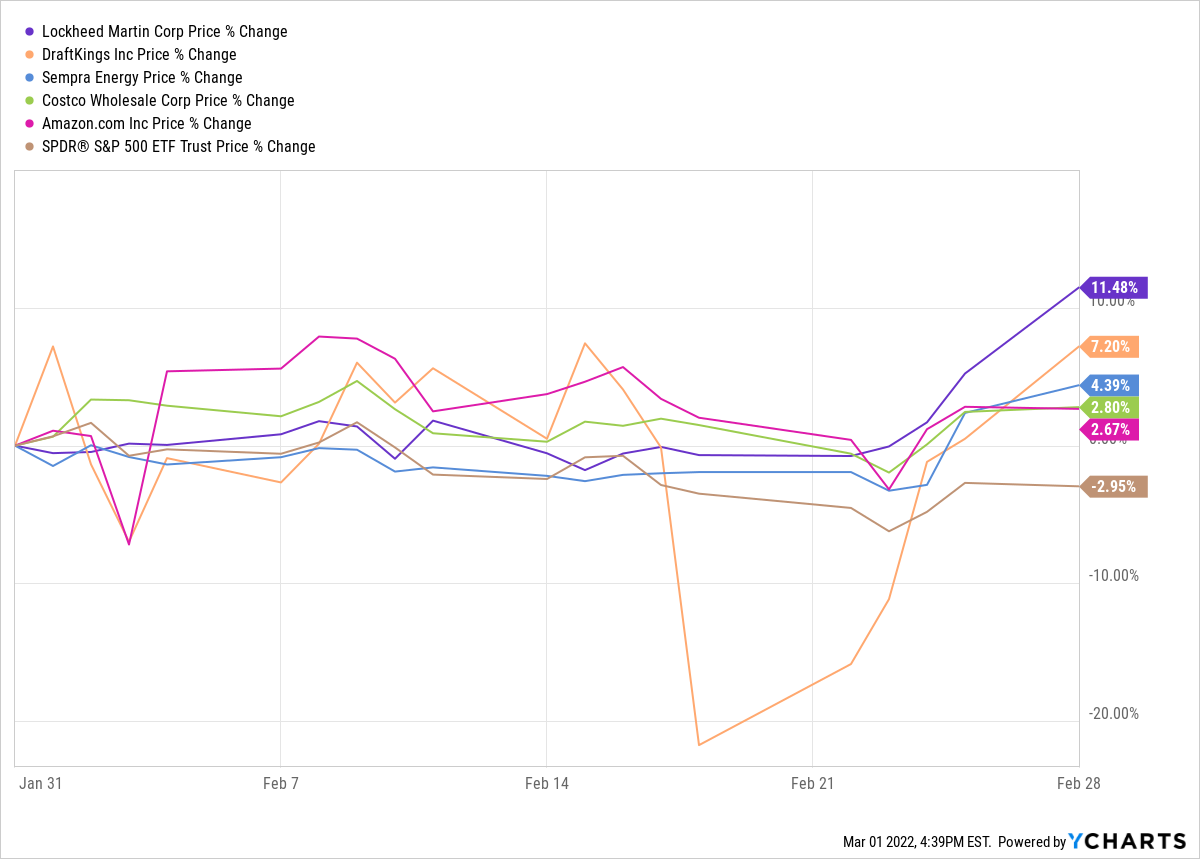 Lockheed Martin, which had been one of the portfolio’s biggest laggards during most of the GIP’s first 18 months, has been on a roll in 2022. That it has been the best performer so far this year isn’t all that surprising, as companies that make weapons often thrive during times of geopolitical conflict. 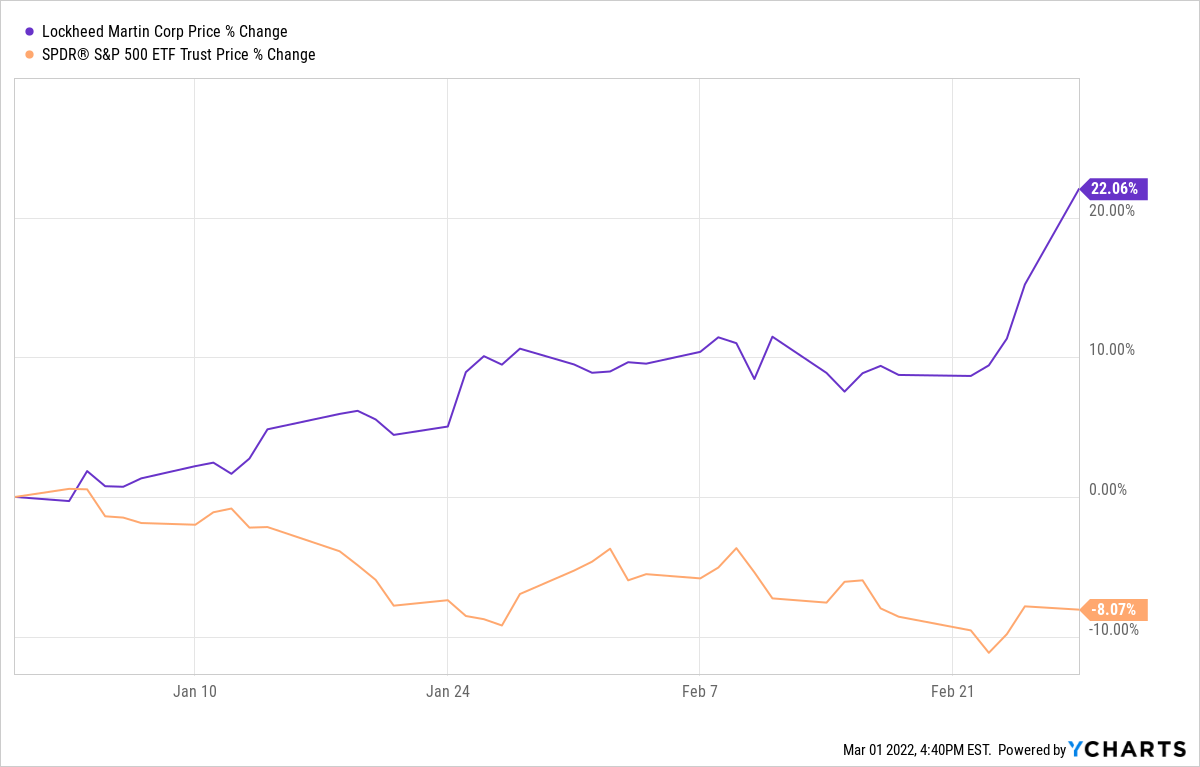 As for the companies I bought for the portfolio in February, Nike and Apple have both taken stances against Russian aggression by limiting the availability of services and products in that country.

But social-justice issues aren’t why I selected them for the GIP in the first place, nor is this Russian attack why I added to them in February. They’re in the portfolio because they are great companies that can help me reach my goals.

Nike and Apple are two of the world’s most recognizable brands, and two of the financially strongest corporations anywhere. Constellation Brands — a leading seller of beer, wine and spirits, with products such as Corona, Modelo, Robert Mondavi and Svedka — also is a high-quality business.

Analysts are bullish on all three companies, rating each a “buy.” Combined, they have received 54 “buy” calls (vs. 14 “hold” ratings) from analysts monitored by TipRanks.

Here is a table showing the share prices of my most recent purchases, the forward price/earnings ratios at the end of February, Morningstar’s fair value estimates, and various analytical services’ 12-month price targets (18 months for Value Line and 6-12 months for Zacks).

Of the three, Constellation Brands appears to be the most attractively valued now, but Apple and Nike trade at a premium most of the time and don’t seem outrageously priced here.

Five of the GIP’s 14 dividend payers had distributions in February, with $3.98 coming into the portfolio. As always, the income each stock produced was reinvested right back into the companies, adding a fraction of a share of each.

Although $3.98 doesn’t sound like much, it was 16% more in dividends than the same five stocks paid in November.

Sempra Energy and Pepsi (PEP) announced dividend raises in February. Sempra’s increase was a little smaller than I expected, while Pepsi’s was in line with most of its recent hikes. Pepsi’s raise doesn’t take effect until the June payment.

At the end of February, the entire portfolio was projected to produce about $61 in income over the next year. That’s a pittance right now, but by the time Logan and Jack will be getting ready for college, I expect the GIP to be kicking out a material amount of income because most of the stocks I’ve picked pay safe, growing dividends.

Any time now, my daughter Katie will give birth to her second child. In October, I started investing for our soon-to-be granddaughter as well as for her older brother, Owen.

In February, I made a fifth $100 investment on their behalf in Bank of Nova Scotia (BNS), and I now own 7.3 shares of Canada’s third-largest financial institution. The position had a total return of 6.8% through February, and the initial buy has crushed the overall market. 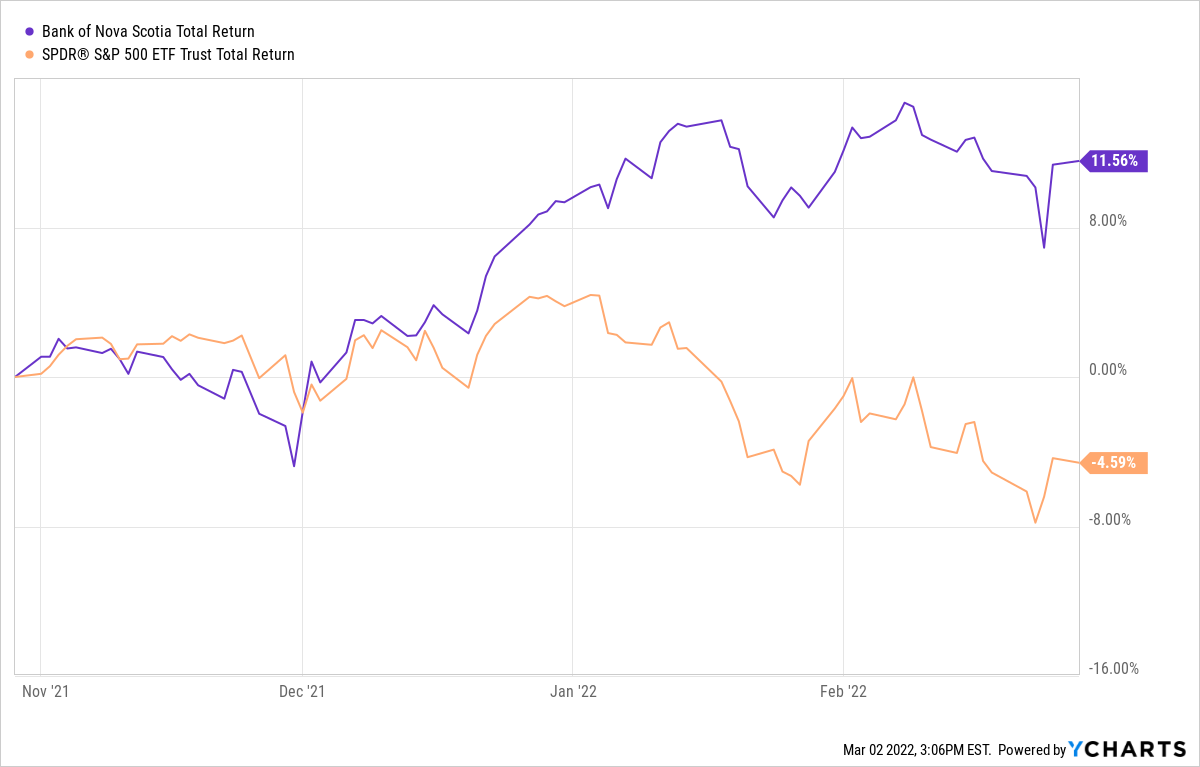 With its 4.3% dividend yield, Bank of Nova Scotia appeals to many income investors, too.

At 17 months old, Owen already is a cool dude … and down the line, he and his sister will think the investments we’ve made for them are really groovy. (The kids still say that, right?) 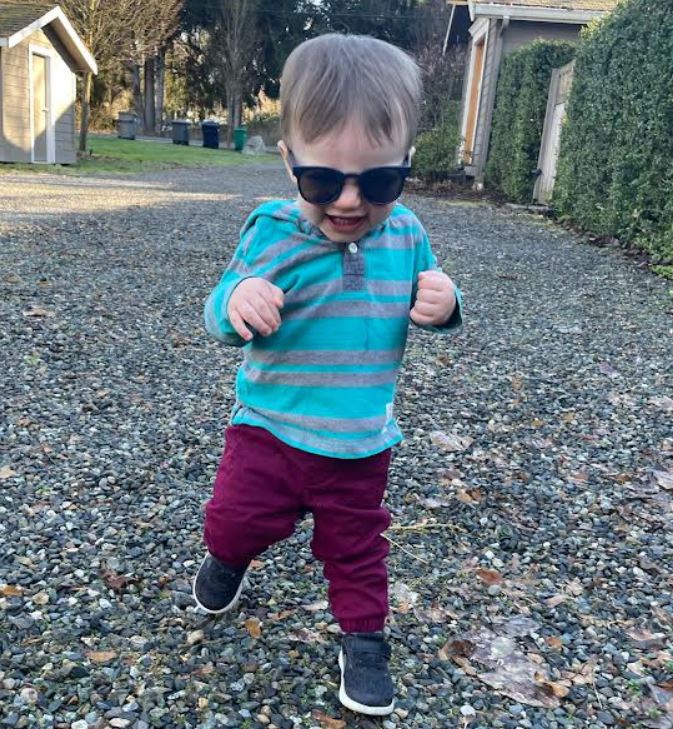 The pain and suffering that Ukrainians are feeling is real, and my heart goes out to them. And I do realize that it might seem uncaring to include such a grave humanitarian crisis within a broader discussion about investing.

But then again, Roseanne Roseannadanna was right: For investors, it’s always somethin’.

There’s always some reason for the stock market to rise or fall. Through all the ups and downs, long-term investments in outstanding businesses such as Apple, Nike, Constellation Brands and Bank of Nova Scotia can help us achieve our financial goals.

As always, investors are reminded to conduct their own thorough due diligence before buying any stock.

NOTE: Those who prioritize dividends should check out my other real-money project for this site, the Income Builder Portfolio; the home page, which includes details on all 46 positions and links to every IBP-related article I’ve written, can be seen HERE.