While researching 3M’s (MMM) decades-long history of paying and growing its dividend, I couldn’t find any time its stock had a 5% yield. 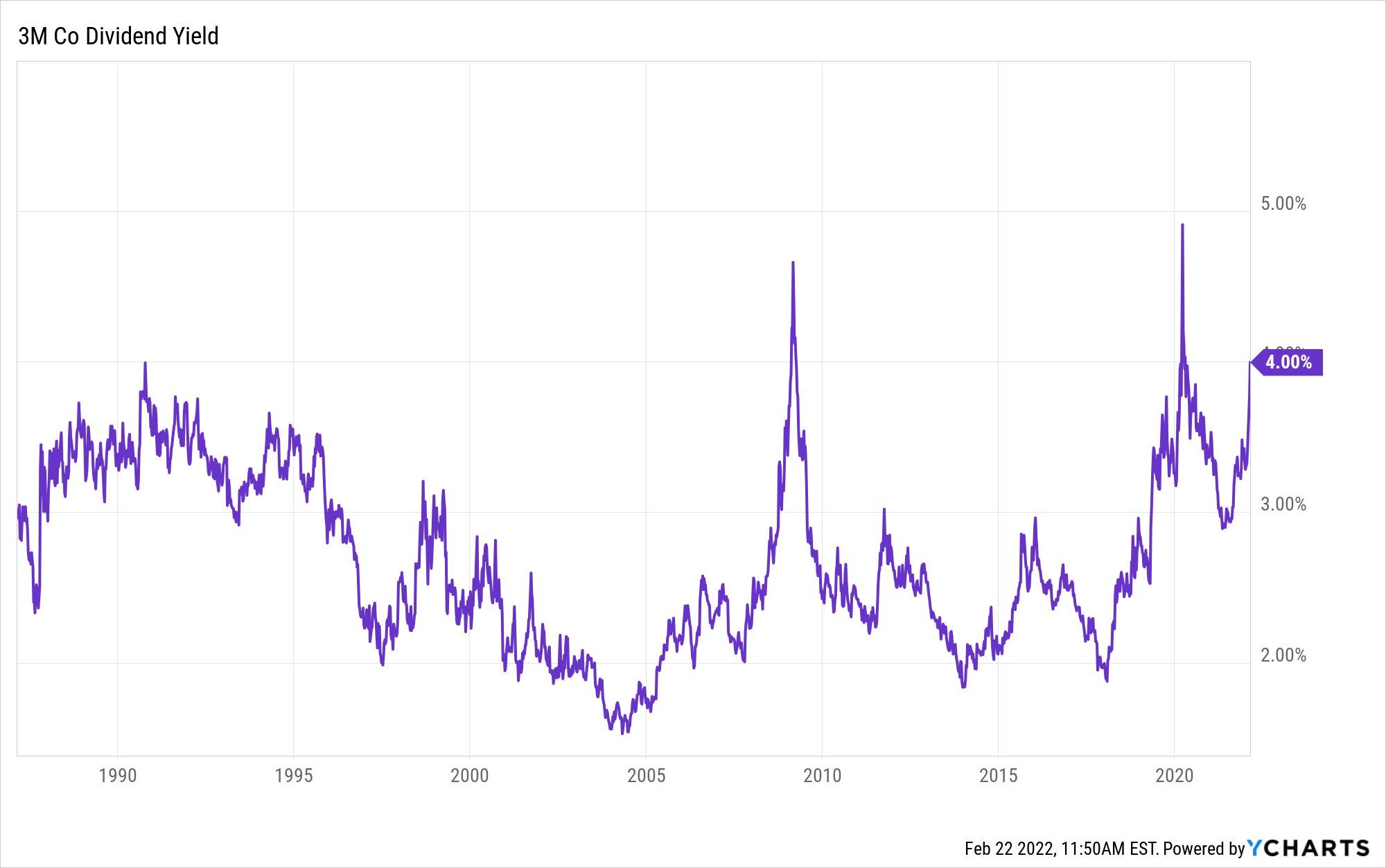 Indeed, although 3M is a Dividend King that has raised its annual payout to shareholders for 64 consecutive years, only rarely in the last half-century has one of the world’s foremost industrial conglomerates even yielded 4% or more:

That’s right … due to a plunging stock price and a little (too little, some might argue) dividend growth, 3M’s yield has hit the 4% mark again.

For that reason, and a few others I’ll get to shortly, I decided to add to the Income Builder Portfolio’s MMM stake. On Tuesday, Feb. 22, I executed a purchase order for 5 shares on behalf of Greg Patrick, this site’s co-owner (and IBP money man).

As you can see, I used the remainder of Greg’s $1,000 semi-monthly allocation to add a share of Air Products & Chemicals (APD).

APD is the IBP’s newest position, one we initiated on Dec. 21. (Read my report on it HERE.) I felt comfortable buying it at $293 then, so I was quite happy to snag another share of it Tuesday for more than $50 less. Morningstar gives it a $331 fair value, and I think we got a pretty good deal here.

We all know about iconic consumer products such as Post-it Notes and Scotch tape, but most people might not know how far 3M’s tentacles reach. Here is the official description of its business:

The company operates through four segments: Safety and Industrial; Transportation and Electronics; Health Care; and Consumer.

The company is a leader in numerous fields, and it has been successful for generations. Nevertheless, it hasn’t always been smooth sailing for 3M — especially lately.

The company’s stock has definitely not been MMM-MMM-good over the last few years. Since hitting its all-time high of $259.77 on Jan. 26, 2018, 3M has had a total return of minus-34.5% — severely underperforming in a bull market that pushed the S&P 500 Index to new heights. 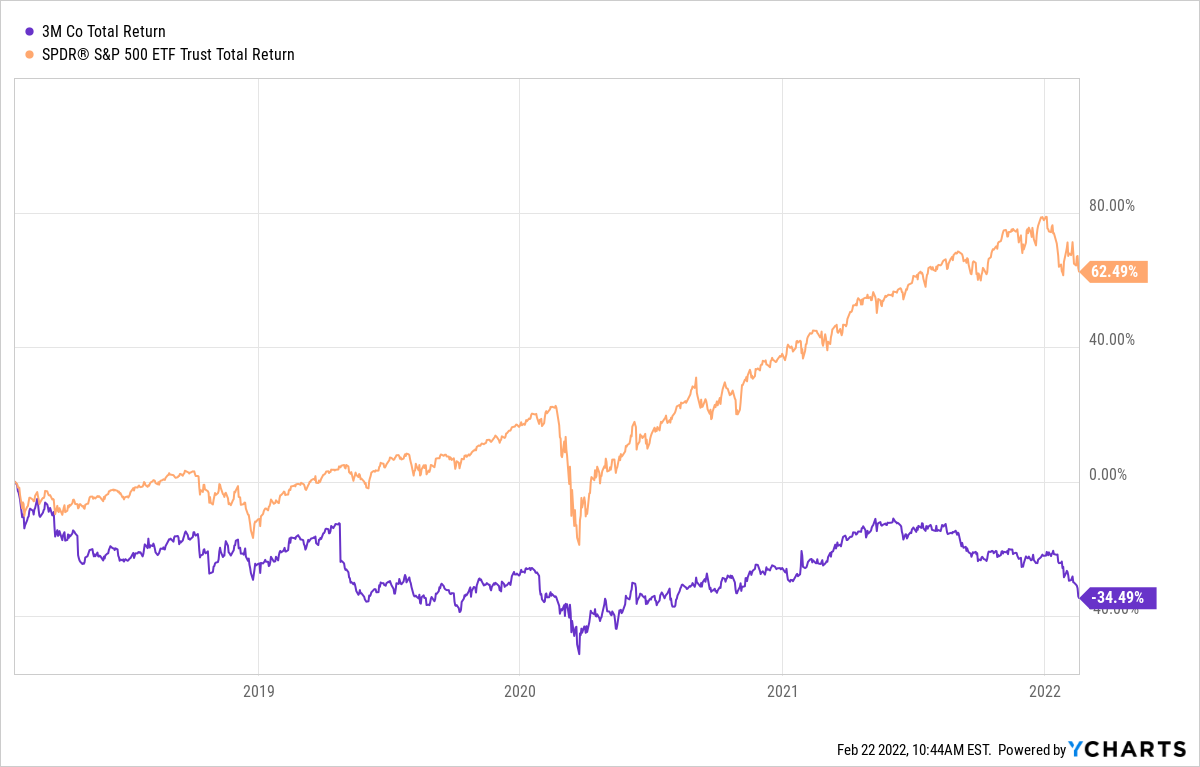 As (bad) luck would have it, Jan. 26, 2018, also was the day I decided we should make 3M the second holding in the Income Builder Portfolio, which debuted earlier that month.

The company had just delivered an astounding earnings report, during which management presented eye-popping data for income and revenue, significantly raised guidance for 2019, and announced a 16% dividend raise. Hello!

MMM had crushed the market in the decade since the end of the Great Recession, and I had every reason to believe the good times would continue to roll. 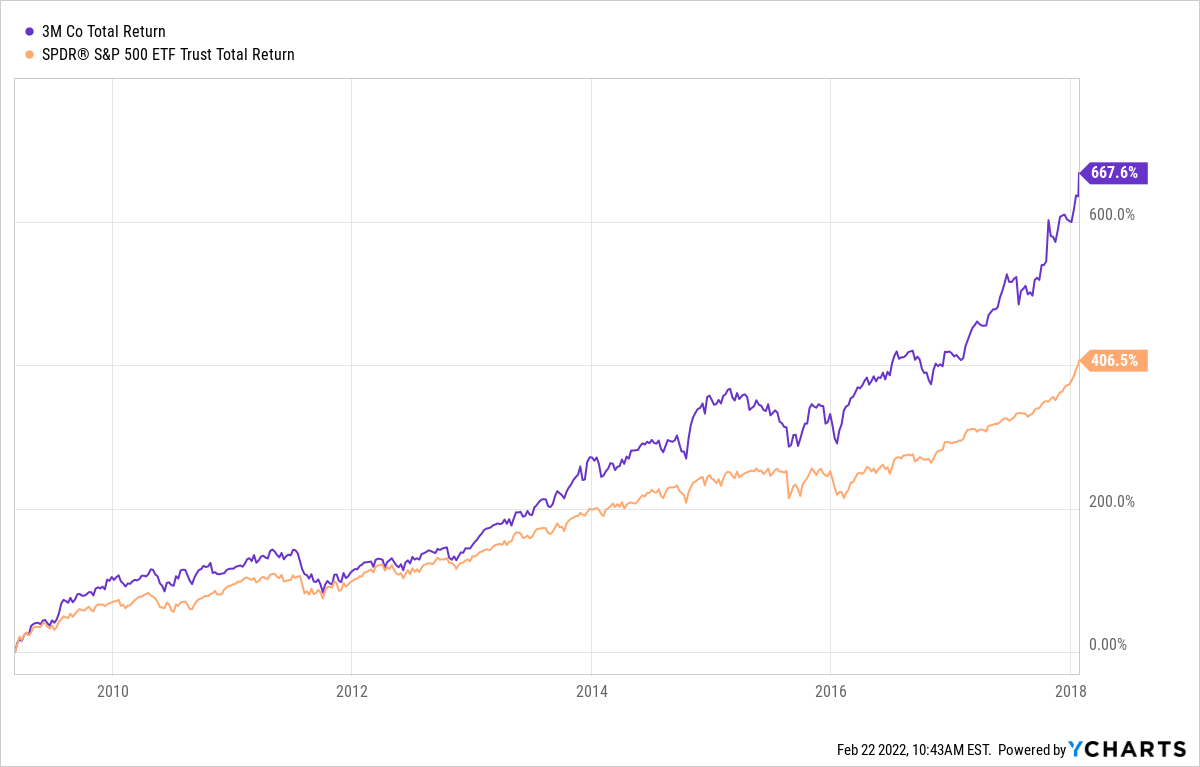 Unfortunately, one thing after another has undermined the company’s ability to function at its previous high level, and MMM has been the IBP’s worst-performing position.

There have been expensive lawsuits against the company concerning PFAS, a chemical that allegedly damaged water supplies in numerous communities … a trade war with China … repeated guidance misses … questionable management decisions … the COVID-19 pandemic … supply-chain issues … and most recently, major litigation involving allegedly defective earplugs the company had marketed for military use.

It’s all added up to pain for investors in a company that once was considered the gold standard of the Industrial sector.

MMM stock got a little bump up after the final 2021 earnings report was generally well-received on Jan. 25. But just two days later, a federal jury awarded $110 million to two U.S. Army veterans who said their hearing was damaged by 3M’s combat earplugs.

It was the largest verdict yet involving the earplugs, there are hundreds of thousands of lawsuits outstanding, and investors reacted with another round of stock-selling. (Meanwhile, the Federal Reserve’s imminent interest-rate increase, along with Russia’s threat to recapture Ukraine through all-out war, are contributing to an overall jittery market.) 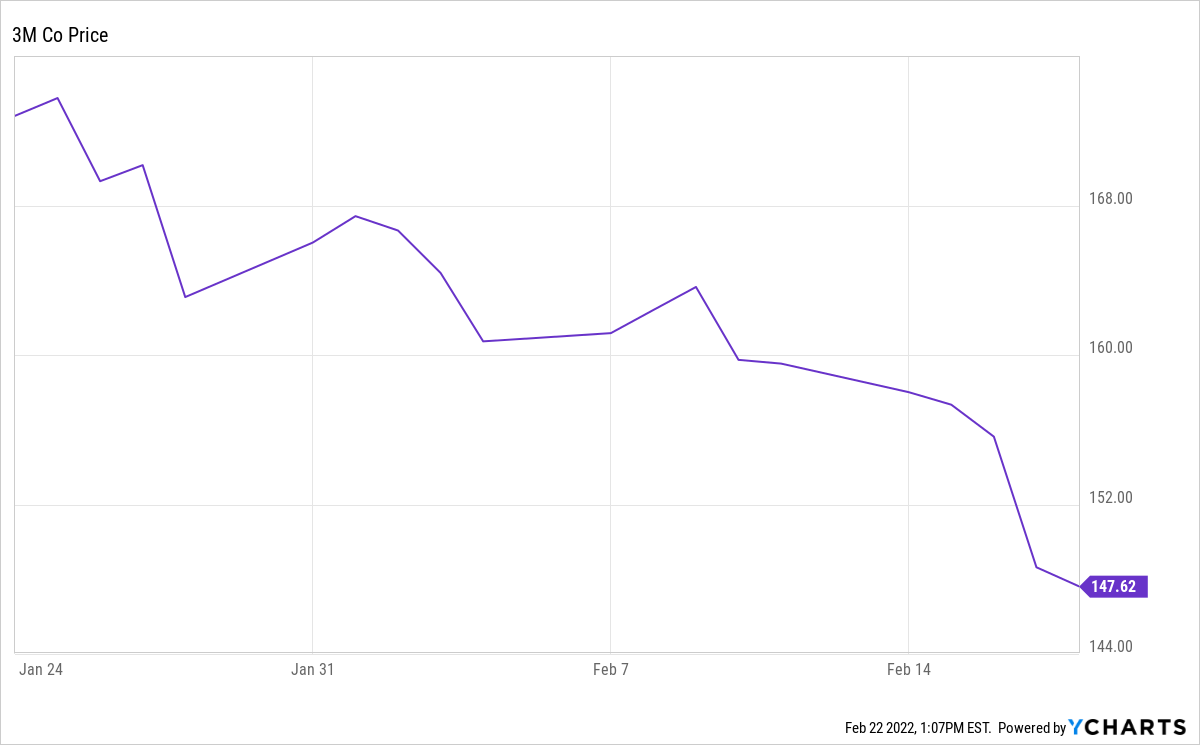 By now, you might be asking: OK, so why buy more of this stock for the IBP? Why keep it in the portfolio at all?

That’s fair, and I wouldn’t blame some investors for running away from MMM as fast as they can.

The simple answer: At this point, 3M represents both a “value play” and a “turnaround story.”

Here’s what Argus analyst John Eade had to say:

We think the company is back on track to achieve its long-term goals of raising margins and growing earnings. Over time, we expect it to generate high single-digit EPS growth, driven by 3%-4% revenue growth, margin improvement, and share buybacks. The company’s balance sheet is solid.

While the Morningstar Investment Research Center hasn’t been very impressed with the leadership of Michael Roman since he took over as CEO in mid-2018, analyst Joshua Aguilar did say:

Recently, however, the firm reorganized its segments from five to four to better align with the firm’s customers and its go-to-market strategy. (Its) international (employees) now report directly to the firm’s segments. In our view, this eliminates another layer of management and gives 3Mers greater autonomy while also allowing for a greater focus on its customers.

Despite some of 3M’s struggles, we’re still talking about a high-quality business, as illustrated by the following Value Line graphic showing the company’s financial strength relative to its peers.

3M also gets an A+ credit rating from Standard & Poor’s; Morningstar’s “wide moat” designation, indicating strong and enduring competitive advantages; and a 75 grade from Simply Safe Dividends, placing the company’s dividend near the top of its “safe” range.

One of the many appealing things about Dividend Growth Investing is that dividends can help set a “floor” for a stock’s price. If a high-quality company such as 3M gets cheap enough, income-hungry institutional and individual investors tend to pile in, moving the price back up.

That helps explain why investors have never let MMM’s yield hit 5% — despite all the wars, recessions, management missteps, pandemics and other cataclysmic events over the decades.

Obviously, I’d prefer it if the dividend of every stock I own would grow by 10%-plus every year, but 3M is dealing with plenty of issues these days. I’m glad the company isn’t overextending itself, and that its free cash flow can still easily cover its dividend.

With raises big, small and everywhere in between, 3M has one of the longest dividend-growing streaks in the investing universe. It’s been boosting its annual payout since Dwight Eisenhower was in the White House, and it’s paid dividends for more than 100 years without reduction or interruption.

Aside from a brief period during the coronavirus crash in which 3M’s yield hit 4.9%, MMM hadn’t been at 4% since late-March of 2009. And for most of the next decade it was under 3%.

So if a dividend investor believes 3M’s turnaround story, the current 4% yield mark is a pretty unique opportunity.

Analysts tend to be momentum driven, so by and large they aren’t excited about 3M. Five of the 20 monitored by Reuters have given the stock an “underperform” or “strong sell” rating, compared to four going with “buy” or “outperform.”

Despite the negativity, though, analysts actually think the price has a lot of room for upward movement. Here, 19 analysts monitored by Refinitiv have an average target price of $174, representing 18% upside.

Those analysts have undoubtedly been influenced by the very low multiples at which MMM currently trades — its price/earnings ratios and PEG ratio are considerably lower than the 5-year averages.

Morningstar says the stock is trading at a 23% discount. 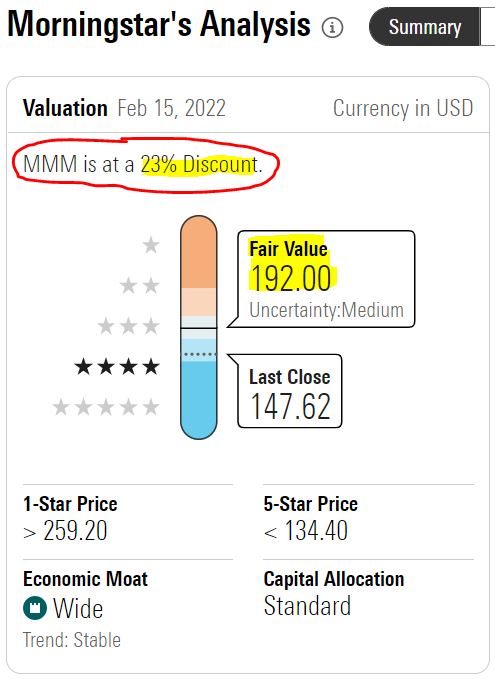 Value Line’s 18-month target price indicates 25% upside. VL also says there could be as much as 80% price appreciation over the next 3 to 5 years.

With a price target of $190, Argus is all about 3M being a value play and turnaround story.

Finally, FAST Graphs shows a stock that appears to be quite undervalued. The red-circled areas indicate that MMM’s “blended P/E ratio” of 14.5 is considerably less than its 5-year norm of 20; and the purple circle shows how the end of the black price line has dipped well below the blue normal-valuation line. 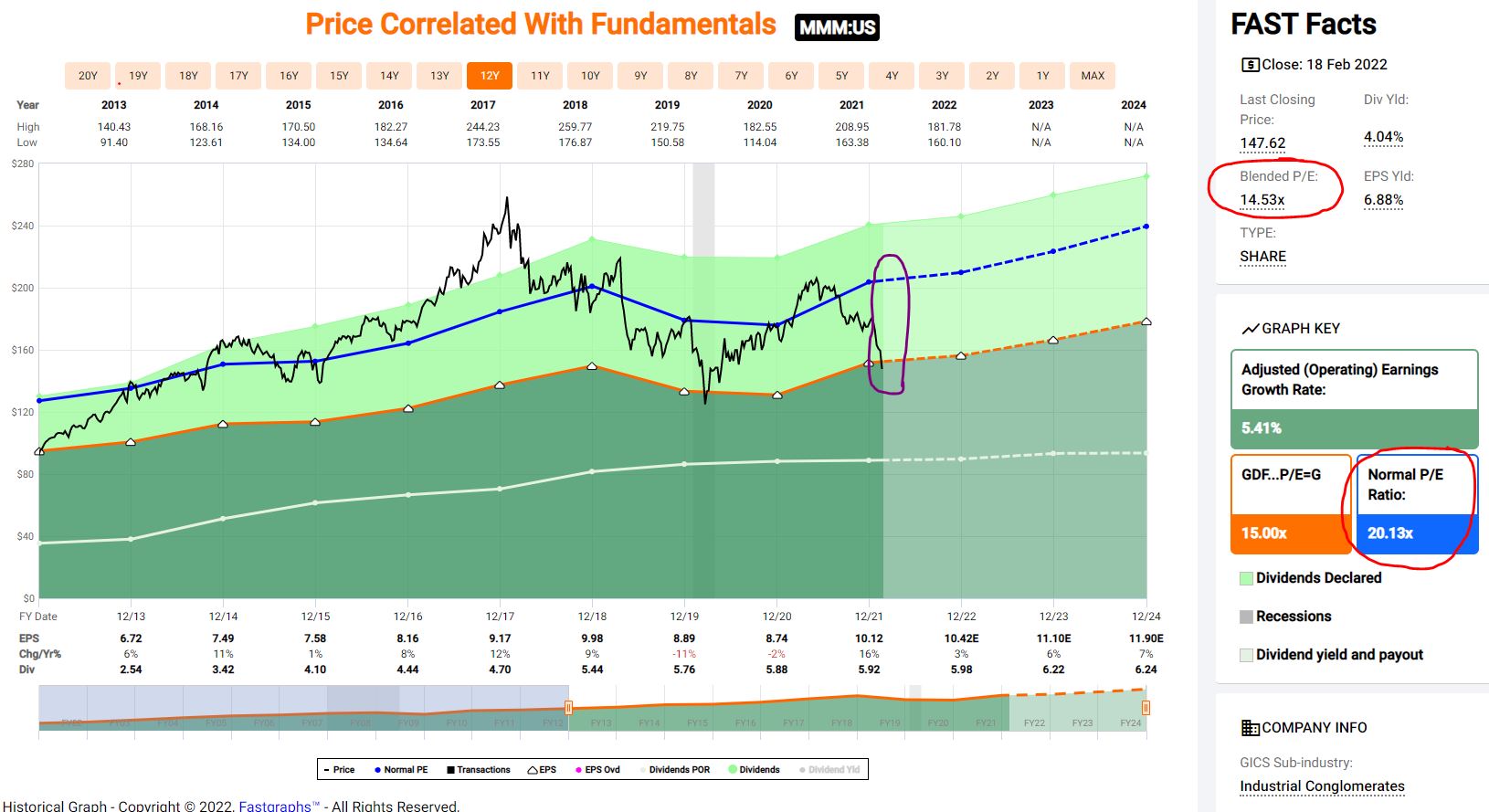 If an investor decides that he or she “likes” MMM, it’s been a while since the valuation has been this enticing.

In addition to choosing 3M three times for the IBP (we also bought some in December 2019), I have had MMM in my personal portfolio for about 15 years. It’s been a profitable position for me, and I’ve received and reinvested thousands upon thousands of dollars in dividends.

Still, investing is a forward-looking endeavor, so if I didn’t think 3M’s turnaround story was legit, I wouldn’t keep it.

Of course, we can’t know today if the turnaround will happen, and it’s certainly reasonable for investors to have a healthy skepticism toward a company that has underperformed in recent years. As always, investors are strongly urged to conduct their own thorough due diligence before buying any stock.

To see all 46 Income Builder Portfolio positions, as well as links to every IBP-related article I’ve written, go HERE.

I also manage the Growth & Income Portfolio, another real-money project that focuses on “growthier” companies. See it HERE.

In addition, I do videos for our Dividends And Income Channel on YouTube. Check out my latest, about buying utility stocks in a rising-rate environment, HERE.