There are two parts to the theory that interest-rate raises by the Federal Reserve adversely affect stock prices of utilities:

However, history — especially recent history — suggests that the impact might not be negative at all.

That’s why the imminent rise in the Fed funds rate did not stop me from selecting my favorite utility, NextEra Energy (NEE), as well as two other high-quality utes, American Electric Power (AEP) and Alliant Energy (LNT), for our Income Builder Portfolio.

On Monday, Feb. 7, I executed orders for the three stocks, totaling about $1,033, on behalf of this site’s co-founder (and IBP money man), Greg Patrick.

Limit orders were used to buy all 3 stocks; in each case, the order executed in 2 transactions a moment apart.

I’ll discuss NextEra and the other two companies in a minute. First, let’s take a quick look at how the Fed funds rate works, and then talk about its relationship to utility stocks.

As part of its monetary policy, the Federal Reserve’s policy-making body meets eight times a year to set a target interest rate at which commercial banks borrow and lend their excess reserves to each other. 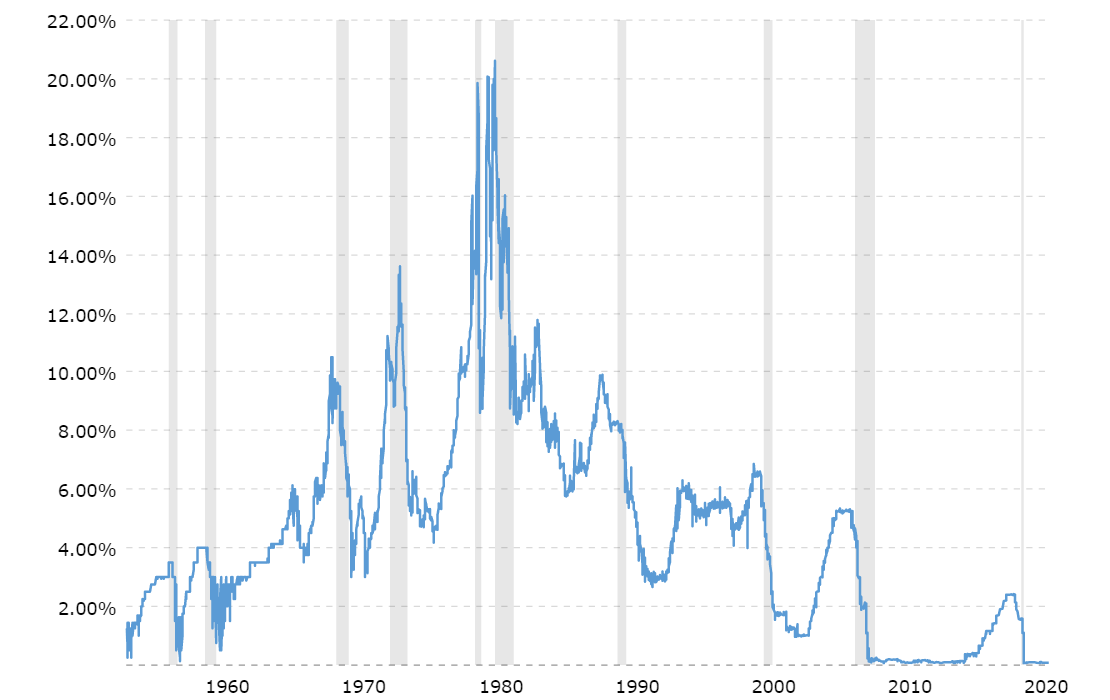 As the Great Recession raged on in 2008-09, one thing the Fed did to stimulate the economy was significantly reduce the funds rate nearly down to 0%. The same thing happened during the 2020 coronavirus crash, and rates remain microscopic today. 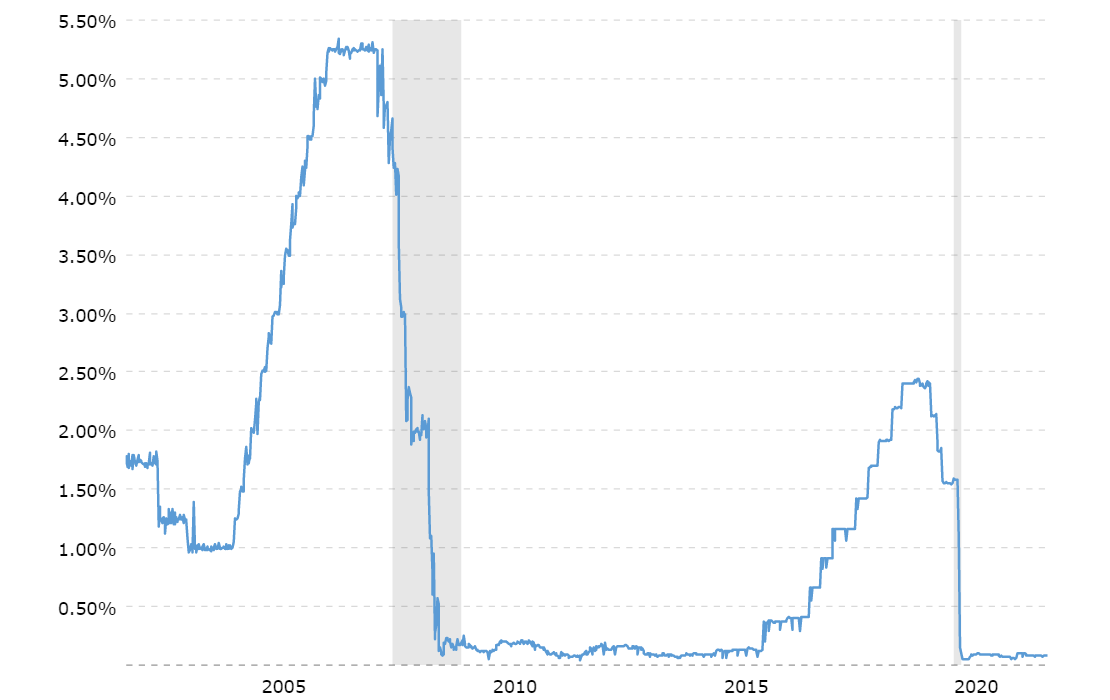 But surging inflation now greatly concerns the Fed, which has indicated it will start raising rates again this year. The first of several 2022 hikes is expected to be announced at its March meeting.

However, looking at more recent decades, when rates never got close to double digits, the sector performed much better in rising-rate environments. That’s an important fact in this discussion, because few expect that the current Fed will hike the rate anywhere near 7%, let alone to 10% or more.

The numbers get even more interesting when one focuses on individual utilities, especially blue-chip names such as NextEra, Alliant and American Electric. 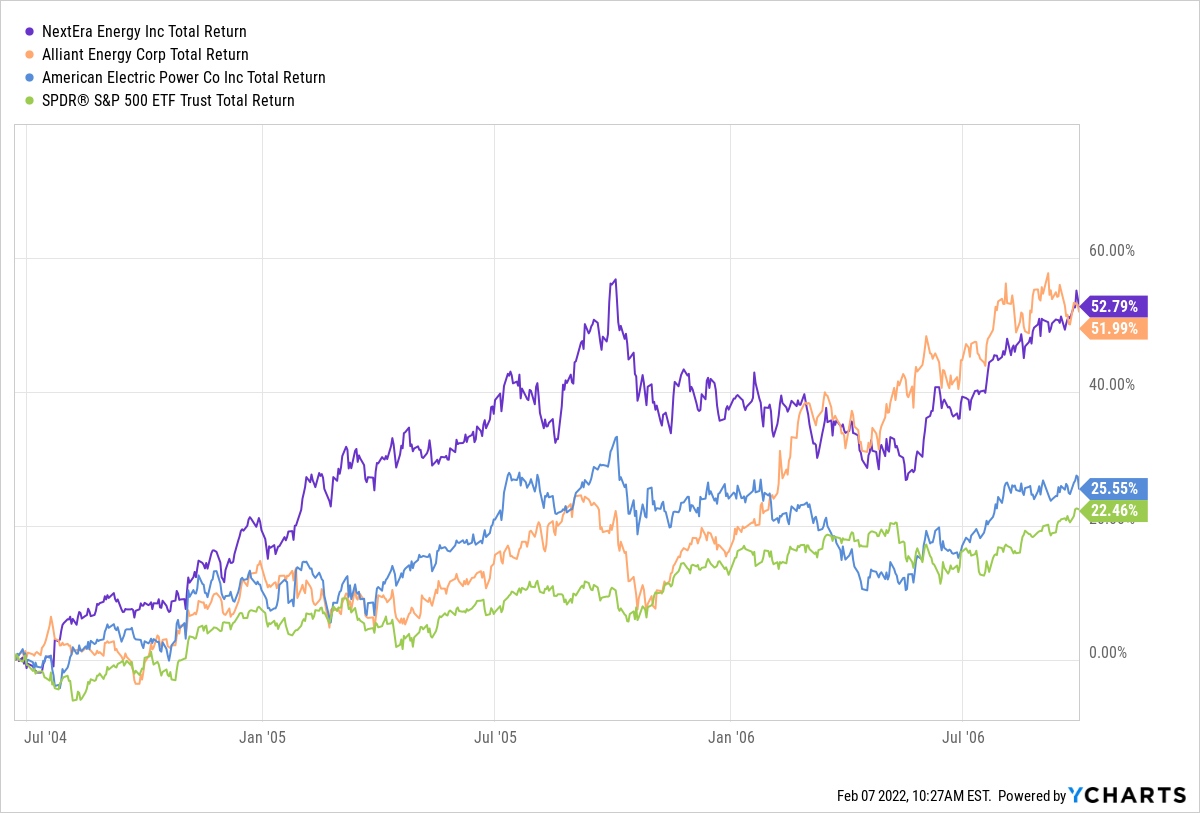 And the outperformance was more eye-opening during the November 2015 to July 2019 period: NEE, LNT and AEP not only crushed the index, they also handily beat the 60% return of the Dow Jones Utilities Average. 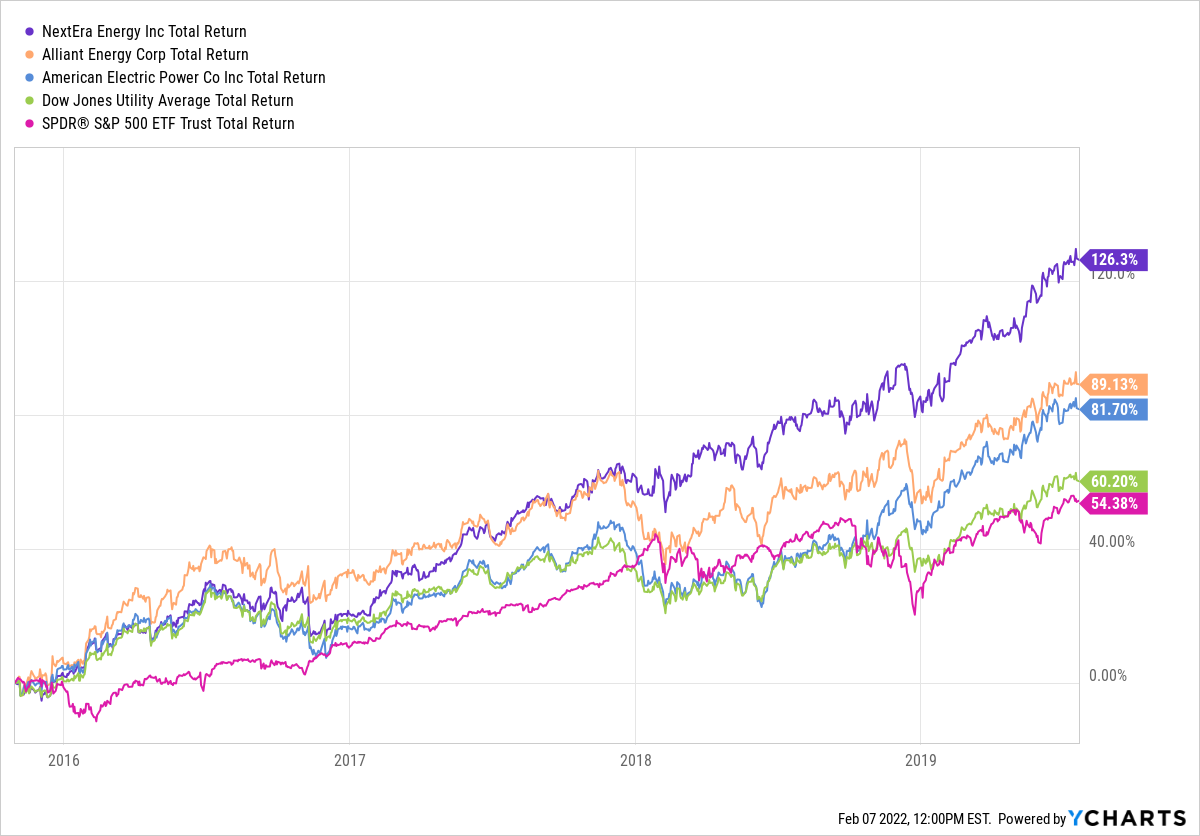 It helps that these companies operate in what are generally considered “friendly” regulatory environments for utilities.

Because governing bodies in some states believe it’s a net positive if the companies that control their areas’ power supplies are allowed to make profits, regulators have been more likely to let utilities raise customers’ rates to offset cost increases that Fed hikes might bring.

2021 was another outstanding year for NextEra Energy … and the fourth quarter earnings presentation of Jan. 25 promised more to come.

For Q4, earnings increased 3% year-over-year and revenue was up 15%. And although sales ticked down for the full 2021 fiscal year, earnings were up 10% — continuing NEE’s long pattern of industry-leading and market-beating performance. 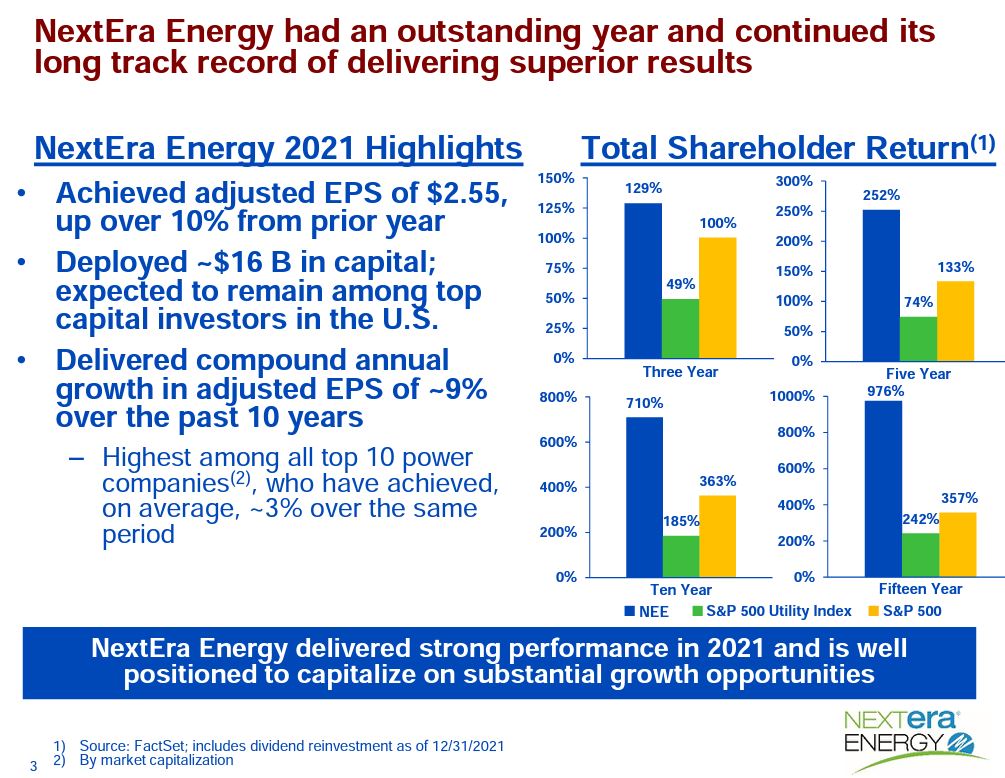 What I liked even more was NextEra’s guidance for 2022 and beyond, because investing always should be a forward-looking endeavor.

The company raised guidance for the next two years and predicted average annual earnings growth of 6% to 8% through 2025. NextEra also said it was expecting yet another double-digit-percentage dividend increase. (I’ll have more on the dividend in a bit). 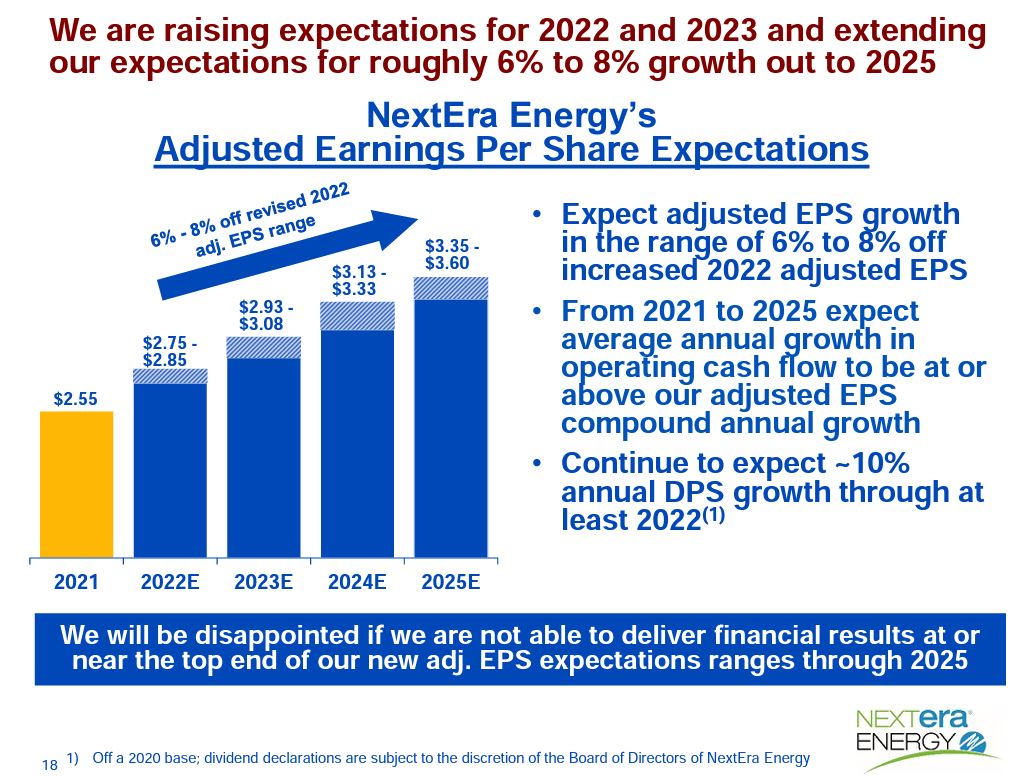 The market usually reacts very favorably to such projections. This time, though, NEE stock was punished, losing 11.3% over the next two sessions. What happened?

Well, it was announced that Jim Robo, the CEO who did a fantastic job of stewarding NextEra Energy’s progression into a renewable-energy giant, was stepping down. John Ketchum, a long-time executive with the company, will take over as CEO on March 1.

It’s not all that unusual for the market to be spooked when an uber-successful CEO such as Robo leaves a company, but Credit Suisse remains very high on NextEra, saying:

We expect a quick but seamless CEO transition, with succession planning in place for years before the announcement. Incoming CEO John Ketchum is well regarded by investors, (thanks to his) deep expertise across the entire NEE portfolio. We see the new management team in place with 15-20 years of experience at NEE translating to same story: Execution at the high end of the long-term plan. We think the recent move in NEE’s stock is overdone and reiterate our Outperform rating on shares.

I agree the pullback has been “overdone,” and that’s why on this occasion I decided to put about twice as much of the Income Builder Portfolio’s money into NextEra as I did into either Alliant or American Electric.

From Jan. 25-28, I also made several purchases of NEE for my personal portfolio at prices between $70 and $75 per share, and it’s been my top performing utility during the 5 years I’ve owned it.

NextEra certainly has been great for the IBP since we first bought it in March 2018 — just a couple of months after the portfolio’s inception.

The NEE position’s 78% total return ranks 6th out of the 46 IBP holdings. That compares to 68% for the SPDR S&P 500 Trust ETF (SPY) had we bought SPY on the same dates and in the same amounts as our NEE purchases. 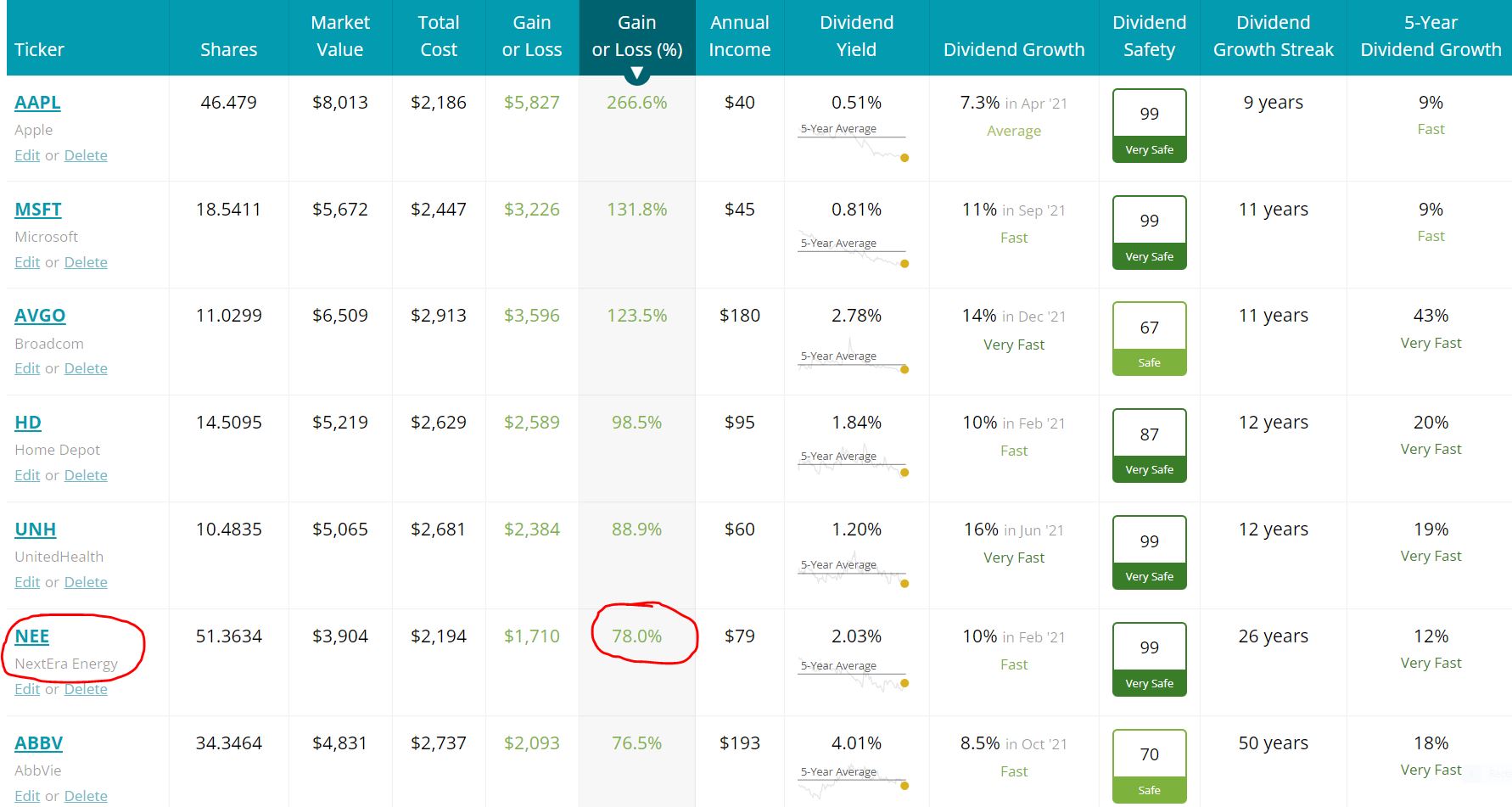 Utilities generally are known for being reliable contributors to investors’ income streams, but most have relatively slow dividend growth rates.

NextEra has the reliability part covered — it’s a Dividend Aristocrat, with 26 consecutive years of increases. But with average compound growth of nearly 10% over the last 15 years, there’s nothing slow about the way NEE has grown its dividend.

And NextEra already has said it’s planning to raise the dividend by another 10% in 2022, with the official declaration due in the next week or so.

Even with all that growth, the incredible performance of the stock has kept the yield down around the 2% mark. That might be a little low for some Dividend Growth Investing practitioners, but I have no problem including NEE in a portfolio that includes stocks with yields as high as 8.6% and as low as 0.5%.

American Electric and Alliant yield 3.5% and 2.9%, respectively. AEP came through with a 5.4% dividend raise last fall and goes ex-dividend this Wednesday — meaning you’d have to own it by market close today to collect the next payment. LNT is just about to make its first distribution after having announced a 6.2% hike last month.

Monday’s buys of AEP, LNT and NEE added about $27 in projected annual income to the Income Builder Portfolio. Those three positions are expected to generate about $256 over the next year, roughly 7.2% of the IBP’s $3,537 total.

Analysts are mostly bullish about NextEra’s prospects, with 16 of the 22 monitored by Refinitiv calling NEE a “strong buy” or “buy.”

Here are some valuation estimates and price targets for NextEra, as well as for American Electric and Alliant:

Despite its high forward P/E ratio, NEE is seen as the most likely of these three companies to experience price appreciation over the next year. LNT gets the least amount of love.

With now-larger positions in NextEra, Alliant and American Electric, along with existing positions in Pinnacle West (PNW) and Avista (AVA), utilities make up about 11% of the Income Builder Portfolio.

I’m comfortable with that, even though the Federal Reserve is about to raise rates. It certainly will be interesting to see if the more recent trend of good performance for utility stocks in a rising-rate environment continues.

The portfolio’s home page includes a table listing information about all 46 positions, as well as links to every IBP-related article I’ve written — HERE.

In addition, I manage the public, real-money Growth & Income Portfolio, a group of “growthier” stocks such as Alphabet (GOOGL), Costco (COST) and Zoetis (ZTS). See it — HERE.

I also make videos for our Dividends And Income Channel on YouTube. Check out my latest, about Dividend Aristocrat Automatic Data Processing (ADP) — HERE.