In June of 1992, I was a young sportswriter covering the NBA Finals between the Chicago Bulls and Portland Trail Blazers. While in Portland, members of the media were invited to shop at the Nike employee store, and I took full advantage.

I loaded up on so many pairs of shoes and articles of clothing for my family that I also had to buy a duffel bag to get everything home. Swooshes for everybody! 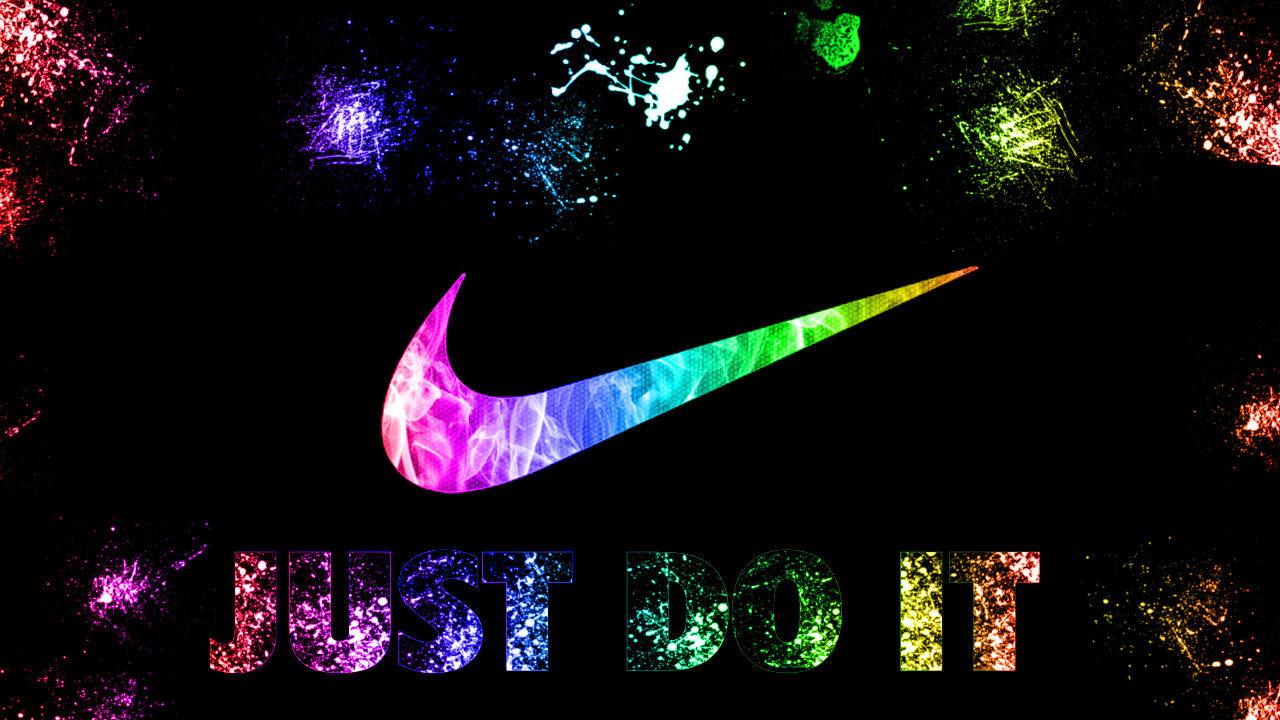 I couldn’t resist getting Air Jordans for myself and my 4 1/2-year-old son Ben despite the fact that — even at the employee-discount price — they were the most expensive sneakers I had ever bought.

Ben adored Michael Jordan, and he loved those shoes. It wasn’t all that long before he outgrew them, of course, and it was a sad day when we had to tell him to stop cramming his feet into them.

Fast-forward 30 years. Ben has bought his sons — 2 1/2-year-old twins Jack and Logan — their own Jordans. 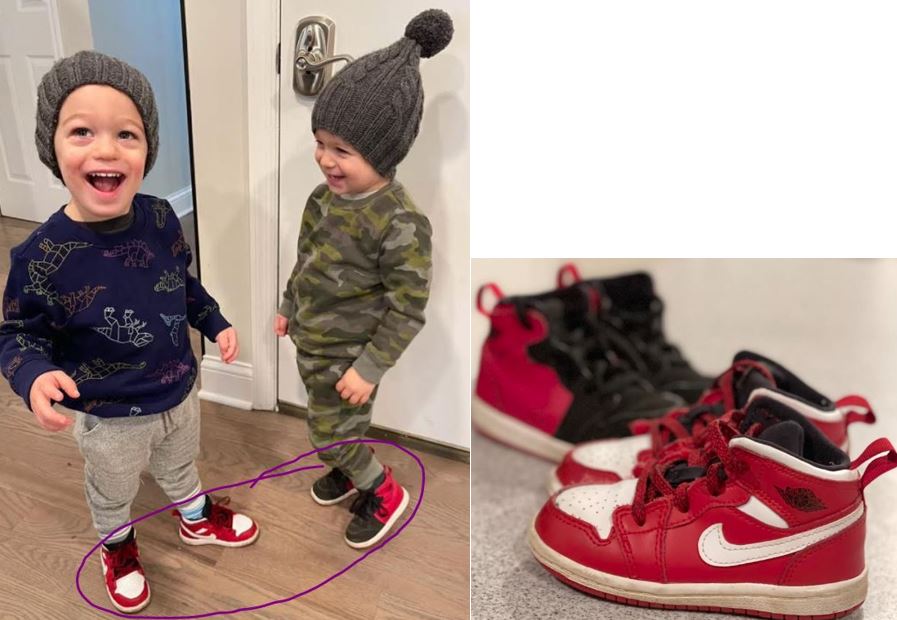 “Those are Jack’s favorite shoes,” Ben said when he texted me the above photos (Jack is on the left). “He won’t wear anything else.”

Jack’s not the only consumer who thinks that way. Nike has been making aspirational products for decades, and its business has been extraordinarily well run. It has a pristine balance sheet and a AA- credit rating.

As a stock, Nike (NKE) has done OK, too. I only wish I had bought some shares at 18 cents apiece when the company had its initial public offering in 1980.

Someday, I’ll talk to Jack and Logan about all of this and more when we discuss Nike, which I just added to my Growth & Income Portfolio. 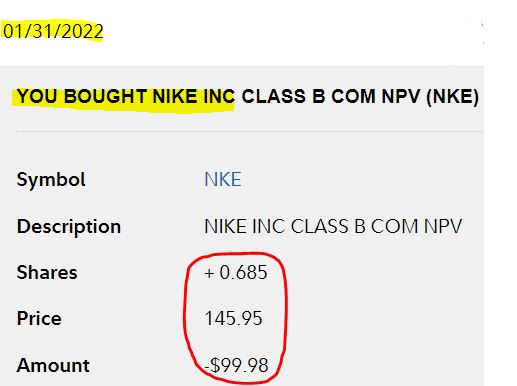 Nike is the 18th position in the GIP, which I launched in June 2020 to eventually help pay for “LoJack’s” college education. In 20 months, the portfolio has grown to be worth more than $4,500, with a total return of about 20%. 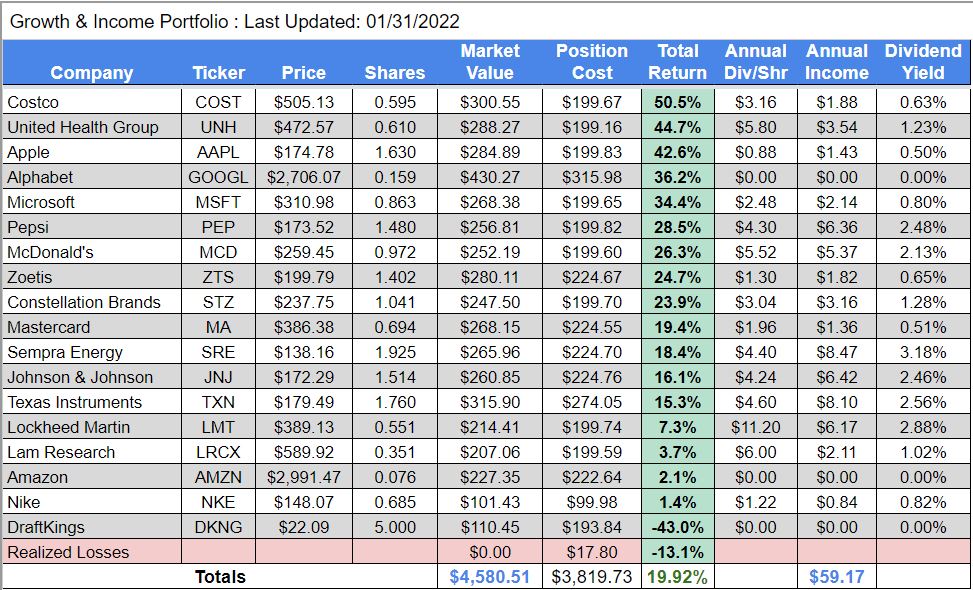 I’ll have more about the Growth & Income Portfolio in a bit. First, let’s dive into its newest member.

In 1964, University of Oregon graduate (and former track athlete) Phil Knight teamed with then-Oregon track coach Bill Bowerman to form Blue Ribbon Sports. Always looking for ways to give his athletes an edge, Bowerman also was interested in shoe design.

Their first mass-produced shoe, the Tiger Cortez, was a joint project between Blue Ribbon and Tiger, a Japanese company. Eventually, the companies had disagreements that led to a break-up, and in 1971 Blue Ribbon rebranded itself as Nike, after the Greek goddess of victory. 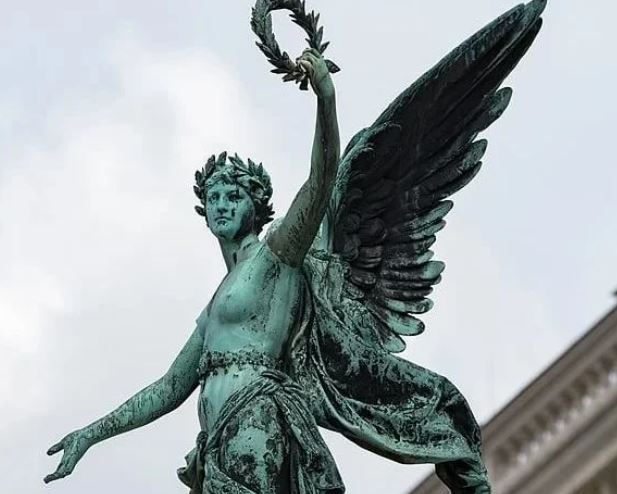 That year, Portland State student Carolyn Davidson came up with the swoosh design, for which she received $35. Knight supposedly wasn’t all that high on the symbol at first, but he did come around to like it. In 1983, he gifted Davidson 500 shares of NKE stock; after splits and dividend reinvestments, that would be worth hundreds of thousands of dollars today.

Inspired by the waffle iron his wife used, Bowerman invented the sole pattern for what would come to be known as Waffle Trainers in 1974. 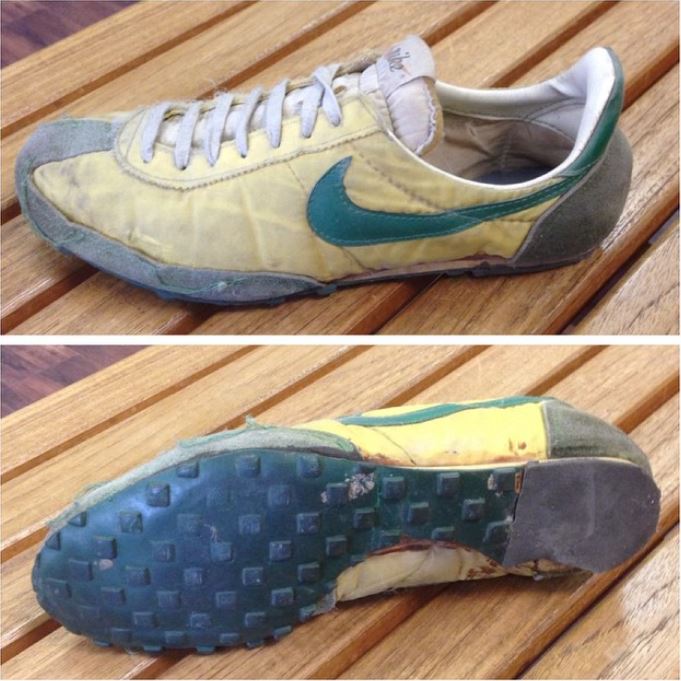 In 1979, Nike introduced its patented “Air” technology, an innovation that uses pressurized air in a durable, flexible membrane to provide lightweight cushioning. As the years went buy, Nike improved its shoes constantly. The company also went on to become a leader in athletic clothing and sporting goods.

As famous as Nike is for its shoes and clothing, it’s probably at least as well-known for its athlete endorsers and advertising campaigns.

In 1972, Romanian tennis player Ilie Nastase was the first athlete to sign an endorsement deal with Nike, but the big “get” was Michael Jordan in 1984. It seems like a no-brainer today, but many considered it risky for a company to give an NBA rookie a 5-year contract and his own shoe line. 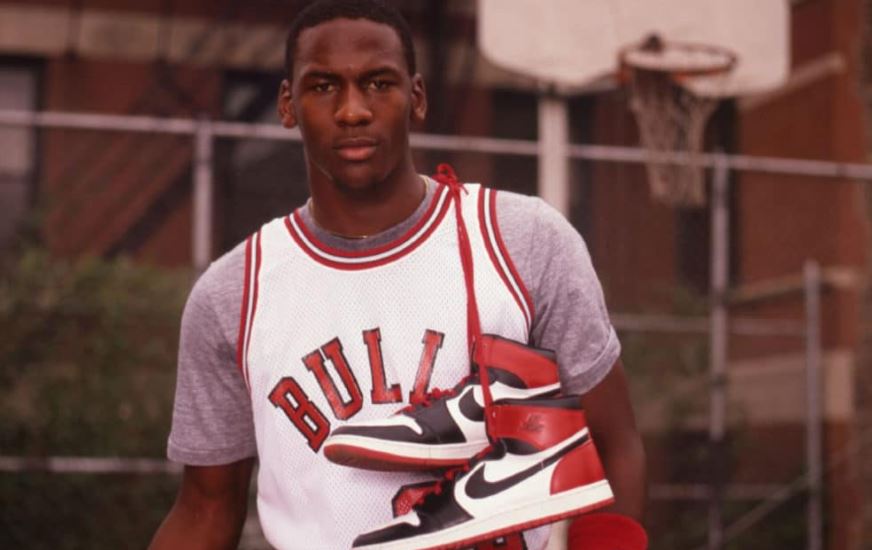 Jordan’s “Be Like Mike” and Jackson’s “Bo Knows” campaigns were immensely popular money-makers for the company, as was the “Just Do It” slogan that debuted in 1988 with an ad featuring 80-year-old Walter Stack running across the Golden Gate Bridge. 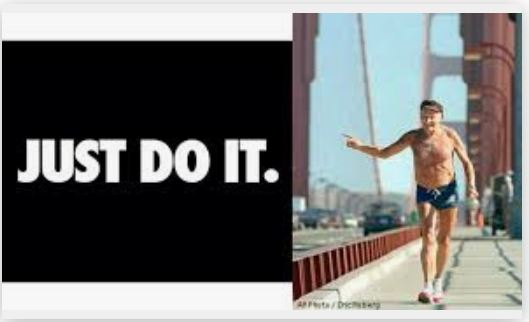 During the 1990s, Nike was criticized for operating sweatshops in Asia, with horrible working conditions and low pay. The company made numerous changes to improve conditions, though some still say Nike hasn’t done enough.

In 2012, Nike became the official supplier to the NFL. In 2015, it secured the same rights with the NBA.

Nike hasn’t shied away from controversy over the years. Most recently, it signed Colin Kaepernick for a 2018 ad campaign centered around the former star quarterback having been blackballed by the NFL for taking a knee during the national anthem to protest police brutality. 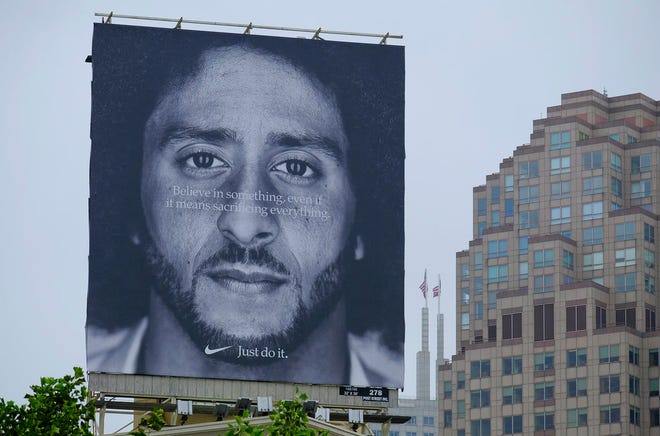 Some predicted that the ad would hurt Nike shareholders, but the stock actually has gained 91% since the campaign debuted (compared to 67% for the S&P 500 Index).

Last year, Nike’s popularity — and the continued appeal of Jordan, who now owns the NBA’s Charlotte Hornets — was illustrated by a winning bid of nearly $1.5 million for the first pair of Air Jordans. 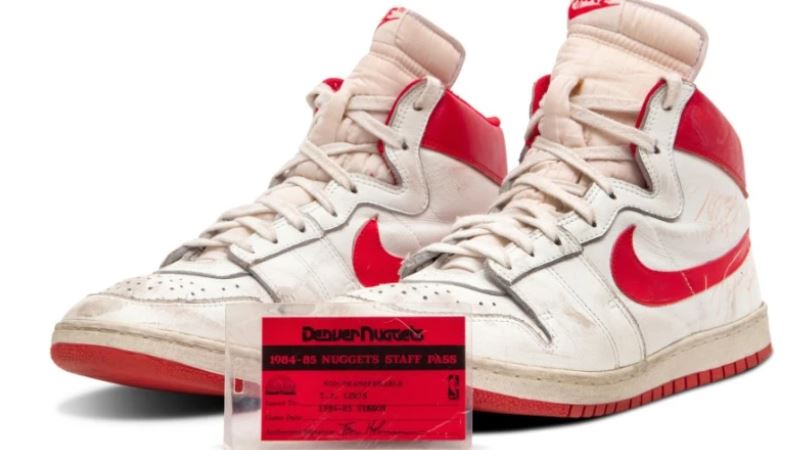 Today, Nike is one of the 30 stocks that make up the Dow Jones Industrial Average. The company has a $234 billion market cap and $45 billion in annual sales. And as a business, it has lapped the competition. 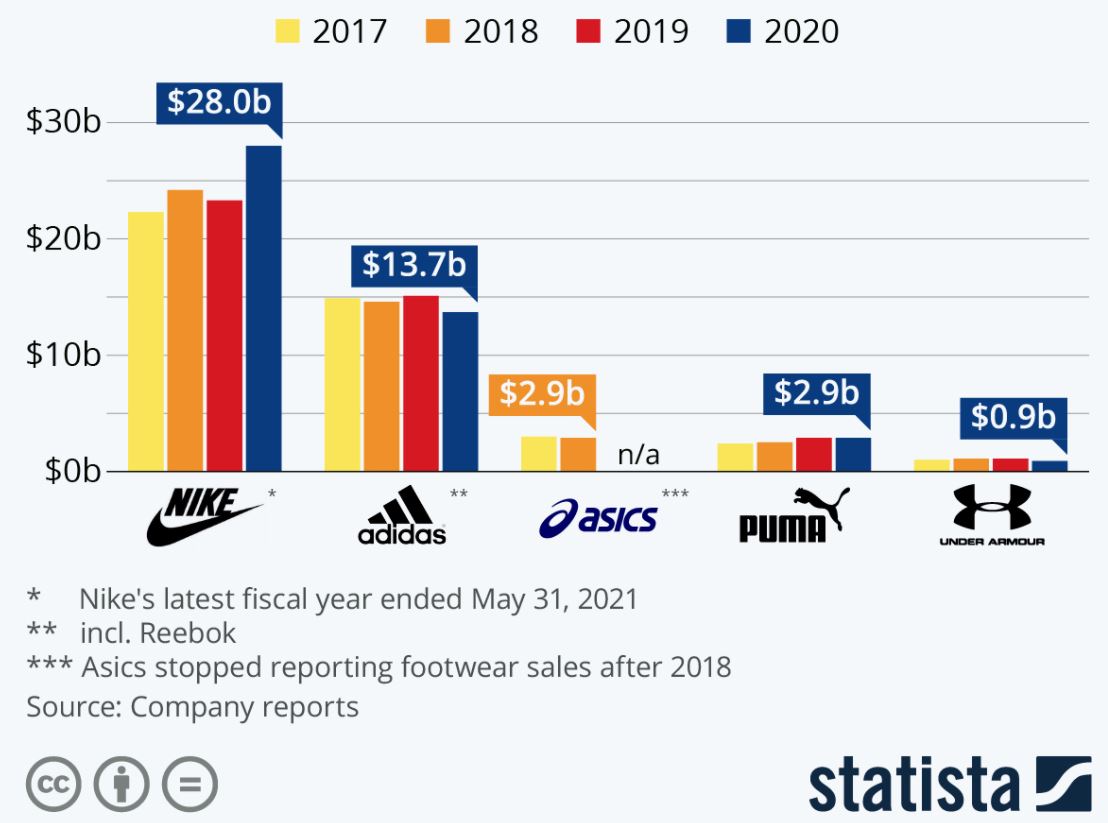 On Dec. 20, Nike reported earnings for the second quarter of 2022. Revenue, earnings and margins all topped consensus analyst estimates.

Nike Direct sales, the direct-to-consumer segment that has been gaining steam, rose 9%.

The biggest negative from the report was that revenue from China fell 20% due to supply-chain issues, Covid-related work stoppages and political conflicts.  Morningstar analyst David Swartz nonetheless said:

We still believe Nike has a great opportunity for growth there and in other emerging markets. The firm experienced double-digit annual sales growth in six of the past seven years in greater China and, fueled by high government investment in athletics, should do so again after in fiscal 2022. Moreover, with worldwide distribution and huge e-commerce that totaled about $9.3 billion in fiscal 2021, Nike should benefit as more people in China, Latin America, and other developing regions move into the middle class and gain broadband access.

Analysts monitored by TipRanks are very high on Nike — 18 of 21 call it a “buy,” with an average 12-month target price that represents 26% upside.

Argus analyst John Staszak is among the biggest Nike bulls, as he increased his target price to $190 after the earnings call, saying: “We expect Nike to continue to dominate the athletic apparel and footwear markets.” 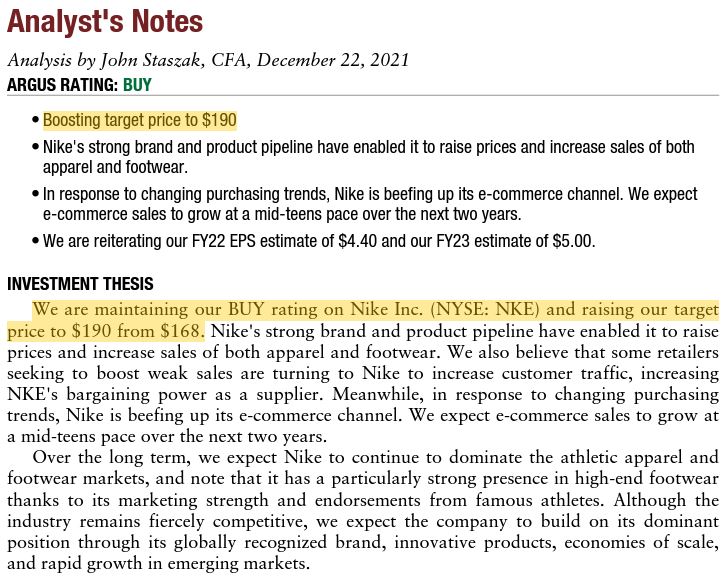 Although Morningstar believes Nike is an outstanding company with a wide moat and excellent management, its analysts believe the stock is somewhat overvalued with a forward P/E ratio of 31. 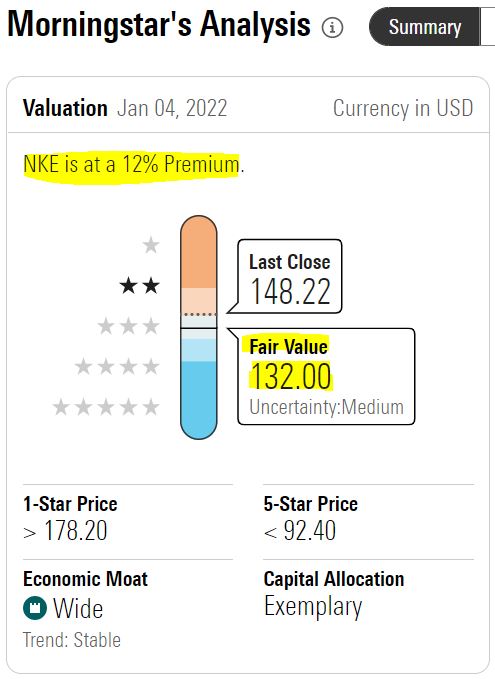 The recent market pullback has largely affected growth stocks, and it has chopped nearly 20% off NKE’s price. Nevertheless, I admit that if I were going to invest big money now, I still might choose something trading at a better value.

However, when making regular, small buys over many years — as I do with the Growth & Income Portfolio, and as so many other investors also do — I am not overly concerned with valuation. I want quality, quality and more quality, and I certainly am getting that with Nike.

With a sub-1% yield, NKE isn’t necessarily a favorite of income investors. Still, Nike does have a long history of rewarding shareholders with reliable, growing dividends. 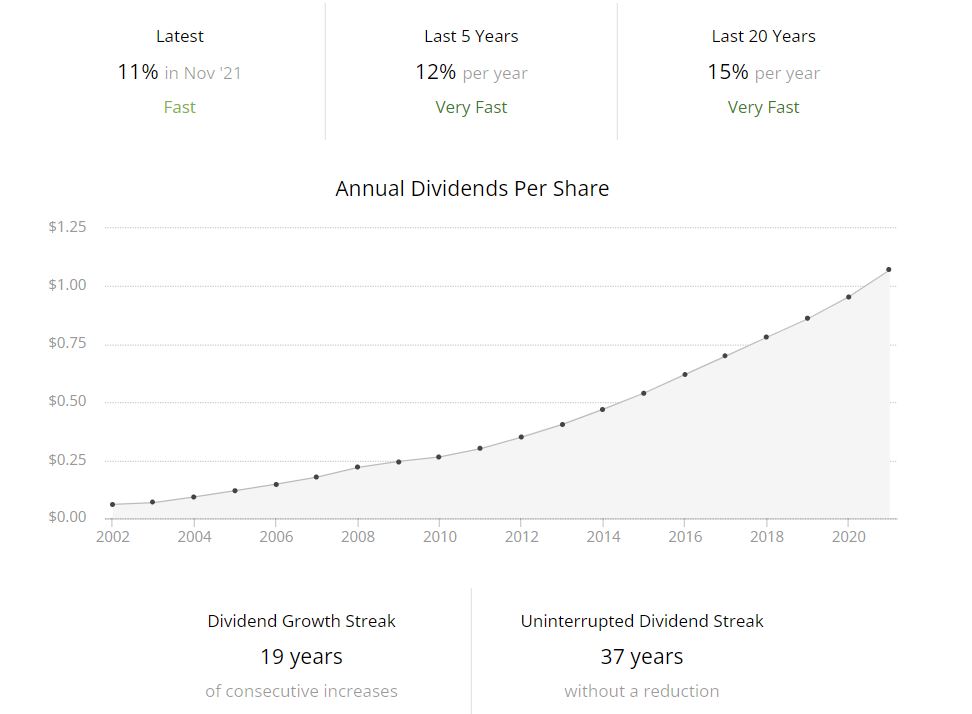 The company raised its dividend by 10.9% late last year. Nike is a tremendous free cash flow generator and its payout ratio is low, so there is every reason to believe the company can keep the increases coming. If so, it will become a Dividend Aristocrat in six years.

It was a rough month for the stock market, with the S&P 500 Index declining 5.3% — its worst January since 2009, when the Great Recession was punishing investors. The tech-heavy Nasdaq Composite Index lost 8.9%. All in all, it was the worst month for the market since the coronavirus crash of March 2020.

So it makes sense that the Growth & Income Portfolio, which includes some of the biggest names in both indexes, would suffer an almost identical 5.4% decline. 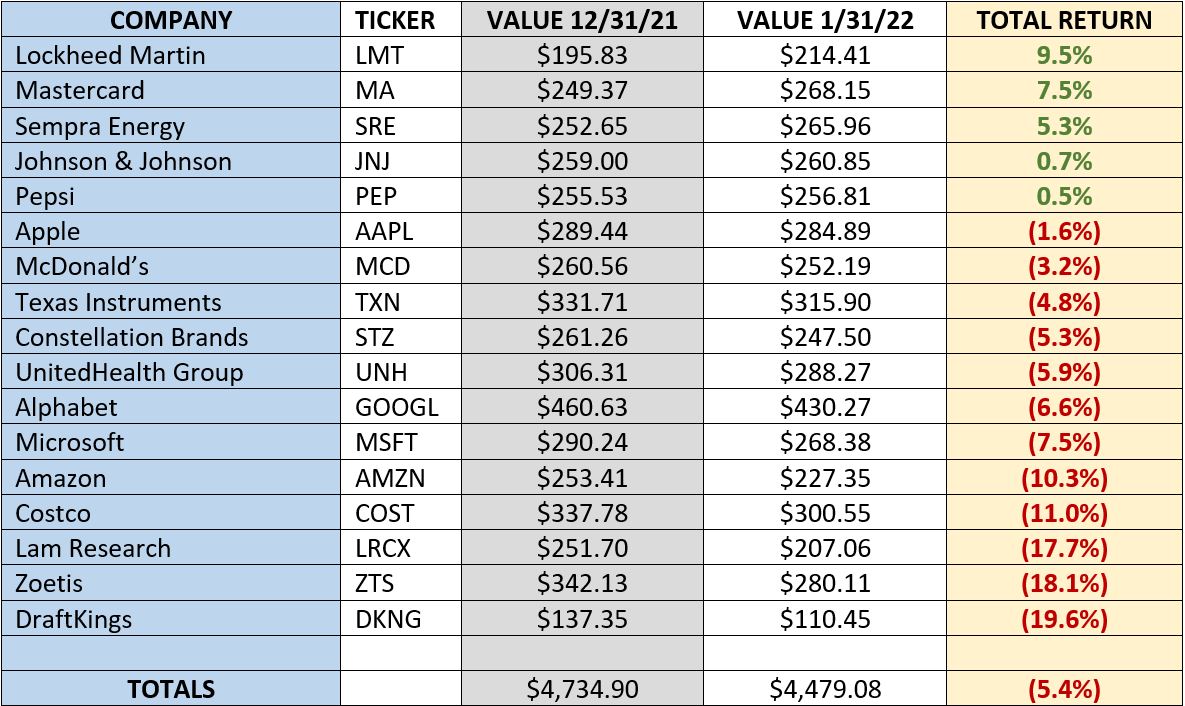 Many of the stocks that had carried the GIP to a 27% gain from inception through Dec. 31, 2021, got hit the hardest during January, including Zoetis (ZTS), Costco (COST) and Alphabet (GOOGL).

DraftKings (DKNG), the gambling company that as recently as August had been one of the portfolio’s top performers, has been in a freefall since Labor Day. 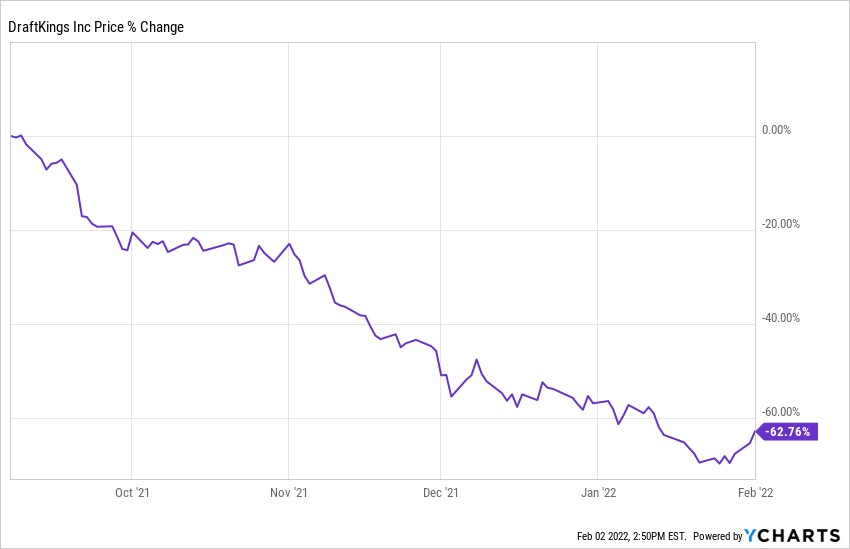 Meanwhile, Lockheed Martin (LMT), which had been one of the GIP’s big laggards, was up almost 10% in January.

With the Federal Reserve planning to start raising interest rates and with plenty of other economic uncertainty, it should be an interesting year for the market.

Although this portfolio focuses on growth, I am a Dividend Growth Investing proponent and I do expect the income stream to become a material contributor over time.

None of the GIP’s 15 income producers raised dividends in January, but Sempra Energy (SRE) and Pepsi (PEP) usually announce hikes in February. Based on their recent histories, I’d expect at least a 5% increase from each.

Three GIP holdings paid dividends in January, with the income produced being automatically reinvested back into the companies.

Although a monthly take of $4.21 is hardly reason to party, it’s more than double the $1.89 the portfolio produced in January 2021. The reasons for the 123% income growth are many:

This portfolio will be growing for years, and eventually the income it produces will be significant enough to bring more smiles to everybody’s faces. 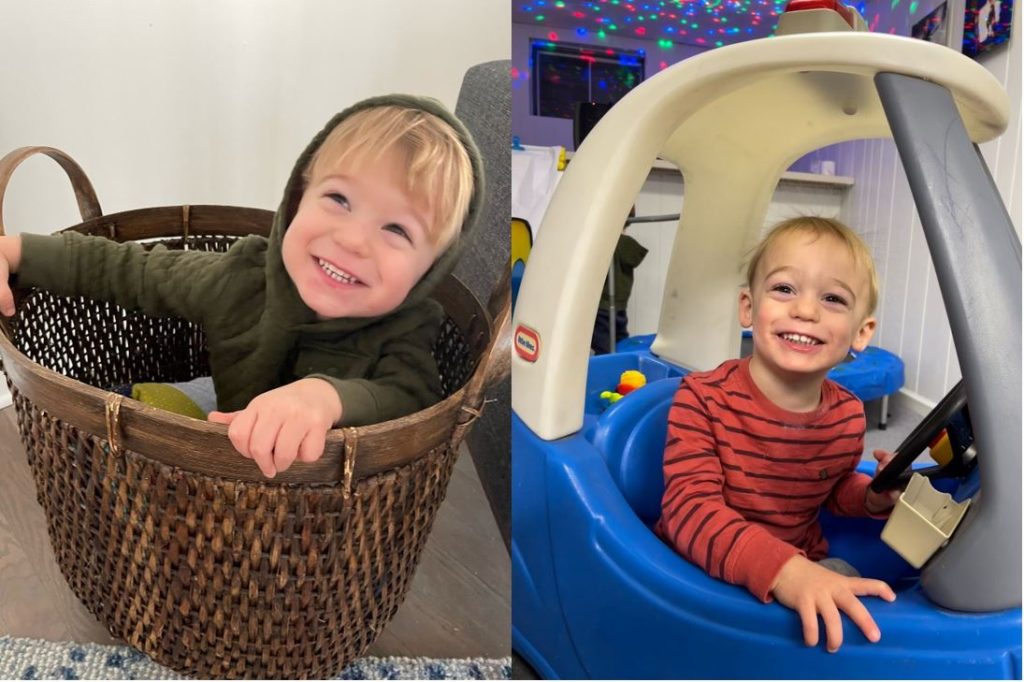 In October, my wife and I also started investing for our other grandson, 15-month-old Owen, as well as his soon-to-be-born sister.

So far, we’ve made four $100 investments on their behalf in Bank of Nova Scotia (BNS), and we now own 5.9 shares of Canada’s third-largest financial institution. The initial buy has crushed the overall market in total return. 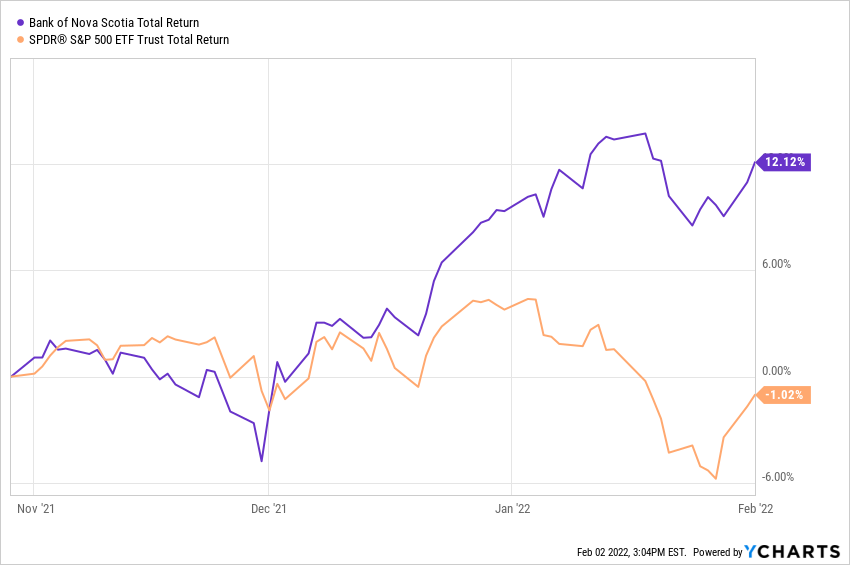 With its 4.3% dividend yield, Bank of Nova Scotia also is attractive to many income investors. The $2.44 dividend we received on Jan. 27 was reinvested to buy another fraction of a share of BNS stock.

A decade or two from now, Owen and his sister will have to reach really high to grab the gains from BNS and the other investments we’ll have made for them. 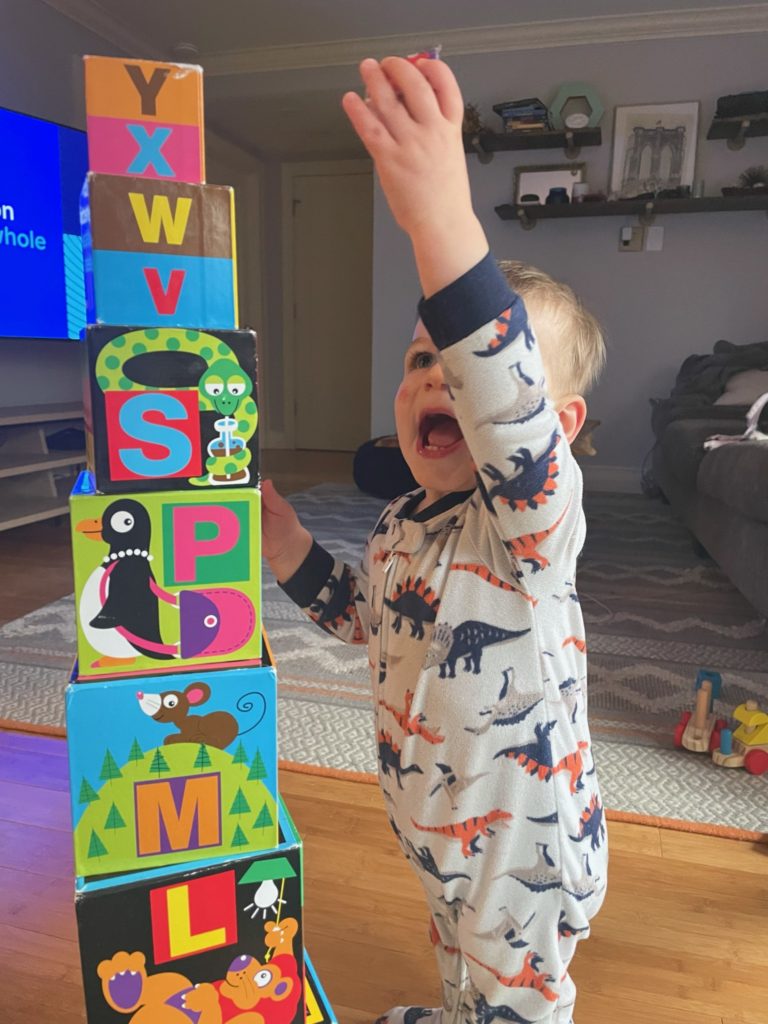 The GIP originally was called the Grand-Twins College Fund, but I changed the name last year as an acknowledgement that most investors have goals that have nothing to do with saving for college.

Whether you make the kind of small, monthly investments that I do within the Growth & Income Portfolio or you typically go big whenever you buy stocks, we present the GIP as way to discuss both investing concepts and interesting companies to research.

The portfolio’s home page — HERE — includes the regularly updated table of stocks as well as links to every GIP-related article I’ve written.

More dividend-centric investors might be interested in the other real-money project I manage for this site, the Income Builder Portfolio. Check it out HERE.

Additionally, I do videos for our Dividends And Income Channel on YouTube. My latest, on “The Safest 7% Yield in the World,” is HERE.