When I woke up on Friday, Jan. 14, I had a stock in mind to be my latest selection for our Income Builder Portfolio. It wasn’t BlackRock (BLK), which we already had bought numerous times.

But then I saw the solid earnings report that the world’s largest asset-management firm released … and then I factored in what I felt was Mr. Market’s too-negative reaction … and then I read about the 18.2% dividend increase that the company’s board of directors declared.

And just like that, BlackRock became our first purchase of 2022.

As the above image shows, we also bought another share of JPMorgan Chase (JPM) because this site’s co-founder (and IBP money man), Greg Patrick, allocates $1,000 semi-monthly … and I wanted to use it all.

This is all about BlackRock, however, as it was the company’s activity on Friday that reeled me in.

The big number to come out of the fourth-quarter earnings presentation was $10 trillion in assets under management. That’s Trillion with a T, and BlackRock is the first in its industry to reach that figure. It’s also 15% more AUM than just a year ago.

Adjusted diluted earnings, meanwhile, grew 16% for the full year and 2% for the quarter.

Although revenue grew 14% year-over-year, Wall Street might have been spooked a little by BlackRock just barely falling short on analysts’ Q4 revenue estimates. 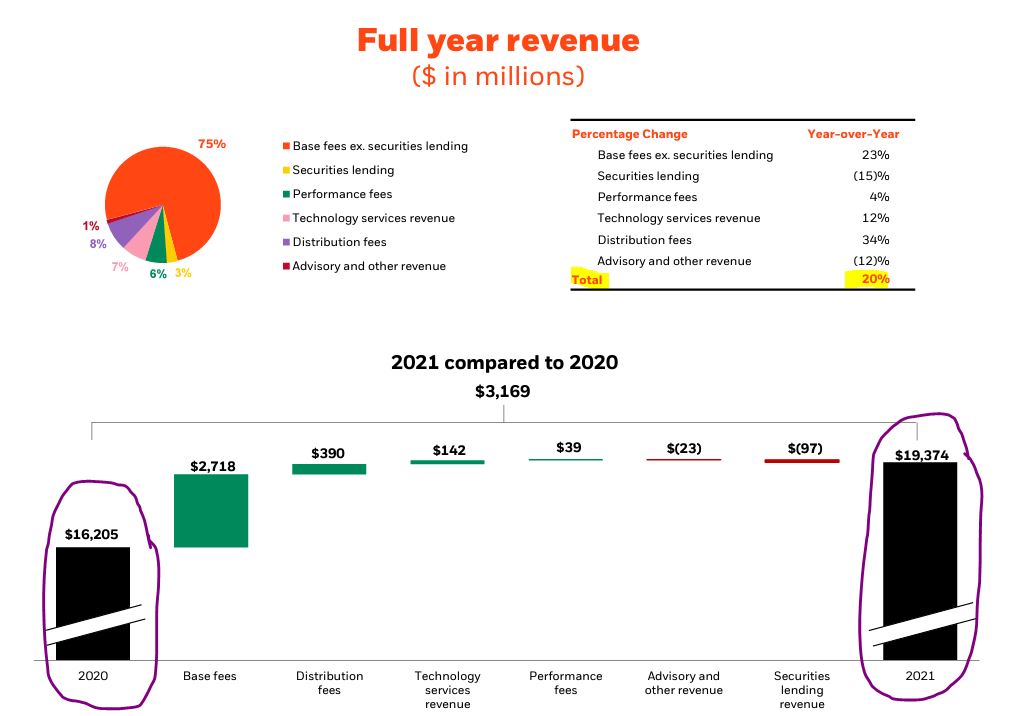 Another category that might have played a role in the knee-jerk negative reaction was that the Q4 adjusted operating margin of 45.5% was down slightly from the 46.6% of Q4 2020. But it nonetheless was very strong, and it came on record operating income for the quarter and the year. 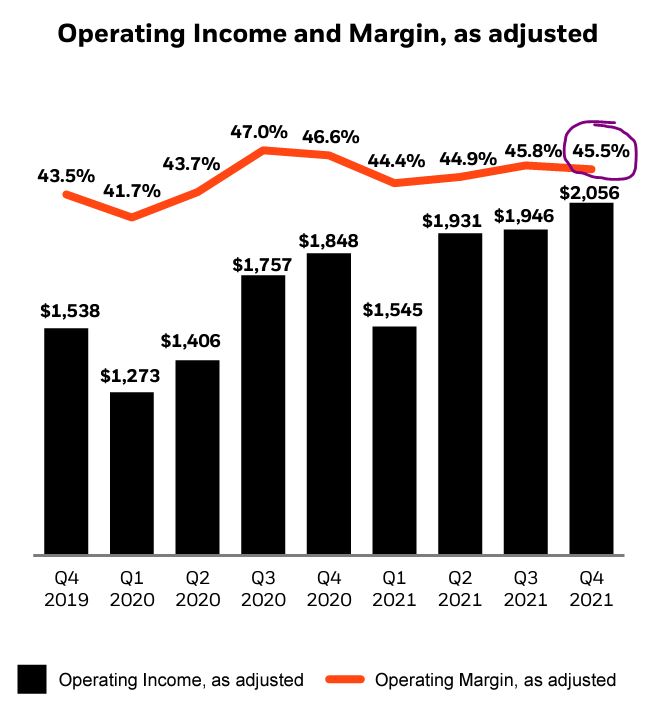 BlackRock delivered the strongest organic growth in our history, even as our assets under management reached new highs. We generated $540 billion of net inflows in 2021, including an industry-leading $267 billion of active net inflows. … Our industry-leading iShares ETF platform remained a significant growth driver with record flows of $306 billion. And our technology services businesses, powered by Aladdin, delivered $1.3 billion in revenue. … BlackRock enters 2022 better positioned than ever – we remain confident in our ability to continue generating differentiated organic growth over the long-term and helping more and more people experience financial well-being.

Well, he would say that, wouldn’t he? After all, Fink is the CEO, and part of his job is touting what he considers great achievements in the face of the COVID-19 pandemic, supply-chain issues, inflation and other headwinds.

BlackRock closed out the December quarter with a record $10.01 trillion in managed assets, up 5.8% sequentially and 15.4% on a year-over-year basis. Annualized organic AUM growth of 7.7% during the fourth quarter, and full-year organic growth of 5.7%, was above our long-term annual target range of 3%-5% (and management’s own guidance of 5%), as BlackRock generated solid flows from both its active fund and ETF operations. … Unlike most of the other traditional U.S.-based asset managers we cover, we are projecting an improvement in BlackRock’s operating profitability over the next five years. …

We expect to increase our fair value estimate for wide-moat rated BlackRock to $960 per share.

That’s right: Morningstar was impressed enough with BlackRock to raise its fair value estimate on the stock from $910/share to $960/share. I’ll get more into valuation in a bit, but that really jumped out at me, as it’s 13% higher than the $846.51 we just paid to add a share to the IBP’s position.

This was the sixth time we’ve bought BlackRock for the Income Builder Portfolio, which makes it the leader in that department. We now have put $3,656 into BLK, our biggest investment in any company.

We’ll be delighted if this one performs as well as our previous BLK purchases. Our February 2019 buy has a market-beating 112% total return; and our first purchase of the stock, back in November 2018, has returned 129% to crush the S&P 500 Index even more decisively. 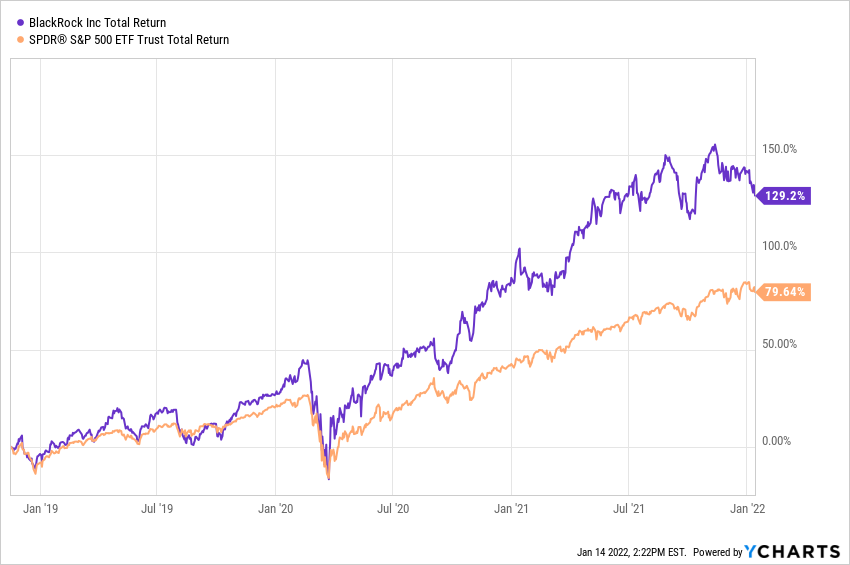 Financials now make up about 8% of the IBP, and I’m comfortable with that percentage in what can be a fairly volatile sector.

BlackRock has earned a reputation as a high-quality business, as reflected by the grades that various rating services and agencies bestow upon it.

Through its iShares exchange-traded fund platform and institutional index fund offerings, the wide-moat firm sources two thirds of its managed assets (and close to half of annual revenue) from passive products. … The biggest differentiators for the firm are its scale, ability to offer both passive and active products, greater focus on institutional investors, strong brands, and reasonable fees. We believe that the iShares ETF platform — as well as technology that provides risk management and product/portfolio construction tools directly to end users, which makes them stickier in the long run — should allow BlackRock to generate higher and more stable levels of organic growth than its publicly traded peers the next five years.

That’s a pleasing assessment, because it isn’t easy for an asset manager the size of BlackRock to keep growing at all — let alone at such an impressive rate.

As if the good earnings report (and somewhat surprising price drop) didn’t catch my eye enough, the dividend raise was the clincher. 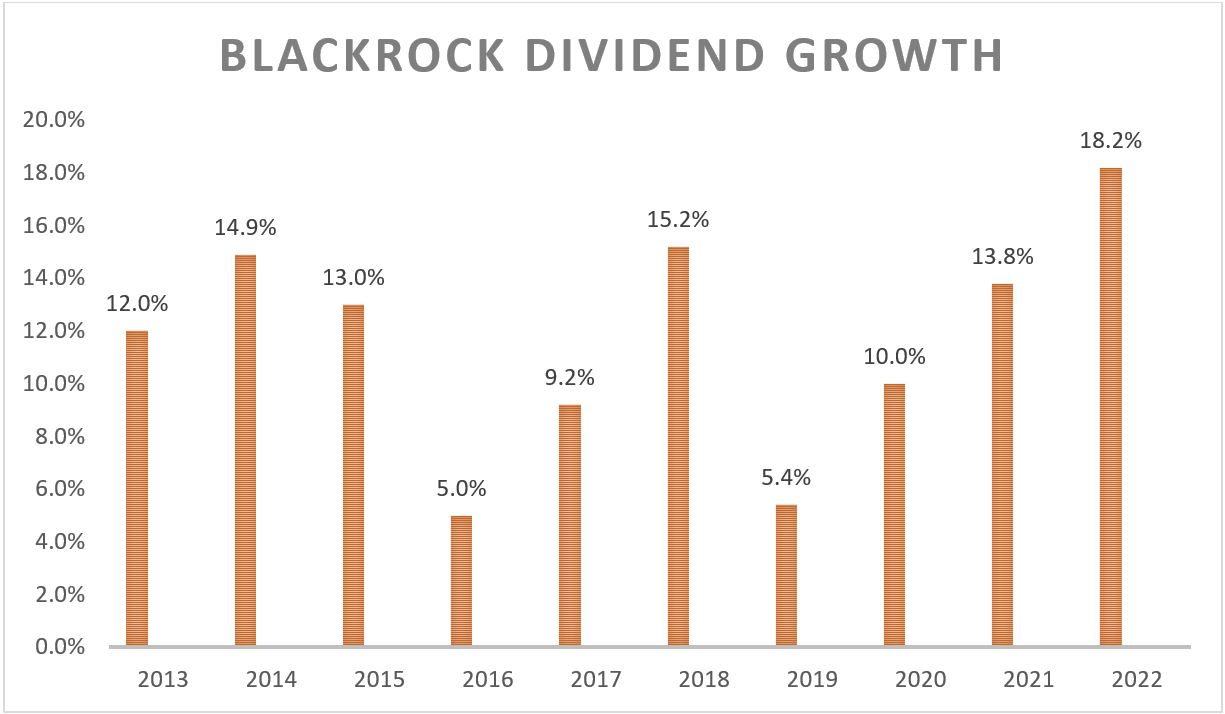 2022 will be the 18th consecutive year that BLK will have paid a dividend without interruption or reduction, though it did freeze the payout for one year during the Great Recession. 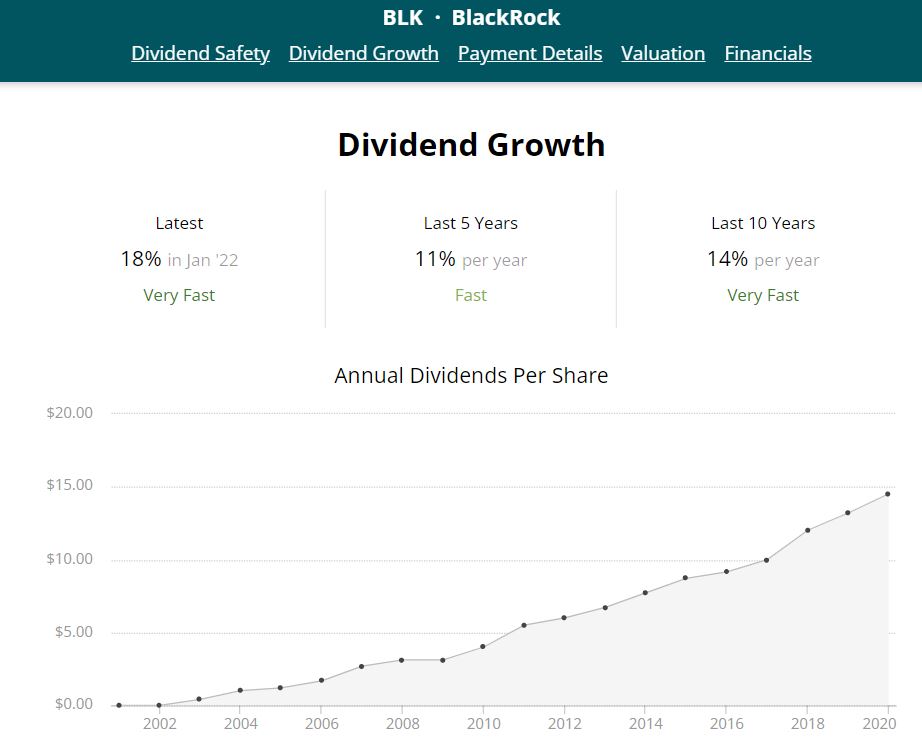 The combination of Friday’s buy and the dividend increase has lifted the projected annual income production of the IBP’s 6.9-share BlackRock position from $98 to $135 — a 38% increase.

Meanwhile, BlackRock reiterated that it is aiming to buy back $1.5 billion of its stock in 2022, further adding to shareholder return. The company has repurchased $11 billion worth since 2013, reducing the share count by 11%.

Because the earnings report just came out, most analysts have not yet updated their assessments of BlackRock. Morningstar, as I mentioned earlier, raised its fair value estimate to $960 … and I would expect others to increase their target prices or, at the worst, keep them the same.

Many already were bullish on the company, with 11 of the 13 analysts monitored by Refinitiv giving the company either a “strong buy” or “buy” rating.

CFRA, also going on information from before the earnings release, called the stock a “strong buy,” with a 12-month target price of $1,010.

BlackRock’s forward P/E ratio showed a 19% premium to its 5-year average, but its PEG indicated a 14% discount. 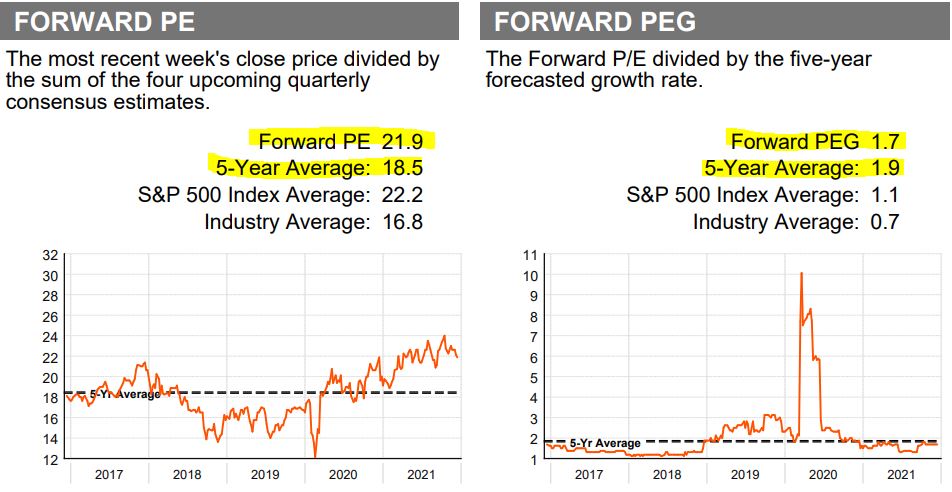 One of my favorite times to buy a stock is when Wall Street knocks it down despite the company having a good earnings report. A double-digit-percentage dividend raise is a cherry on top.

Still, even though Morningstar says BLK is a little undervalued, I wouldn’t call BlackRock the bargain it was in 2018 and 2019, when we bought it at a forward P/E ratio of about 15.

I nevertheless felt OK about adding another share of BLK to the Income Builder Portfolio, but it’s up to each investor to decide if he or she wants to pay the going rate for a high-quality operation that is performing at an industry-leading level.

The portfolio’s home page includes a table listing information about all 46 positions, as well as links to every IBP-related article I’ve written — HERE.

In addition, I manage the Growth & Income Portfolio, a group of “growthier” stocks. See it — HERE.

I also make videos for our Dividends And Income Channel on YouTube. Check out my latest — HERE.