In 2021, most investors did A-OK — or much better than that — despite the many obstacles we faced.

The S&P 500 had a total return of nearly 29%, and only a tiny tick down on the year’s final trading day kept it from ending 2021 at its all-time high. 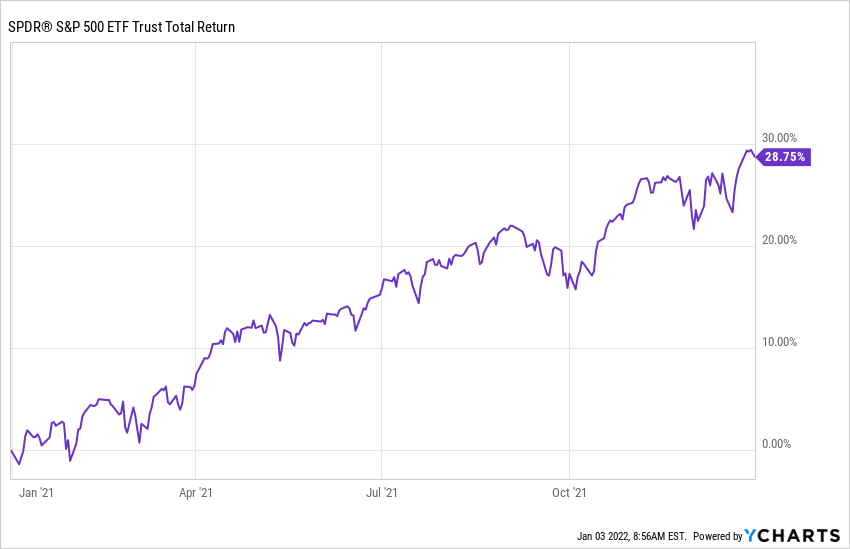 That performance came even as the COVID-19 pandemic — which seemed to be on the run in last year’s first few months thanks to an aggressive vaccine-distribution campaign — decided to get angry again. First, the dangerous Delta variant hit hard, and now the highly contagious (but seemingly less deadly) Omicron variant is sweeping across the world.

Inflation, which had been dormant for more than a decade, was back in full force, driving up prices of everything from food to gasoline to housing to used cars to … well … pretty much everything.

Due to supply-chain issues and other factors, “shortages” became one of the year’s buzzwords. Among many other things, there weren’t enough semiconductors, cars, video-game consoles or diapers. Heck, it even became a challenge to find cream cheese in grocery stores. 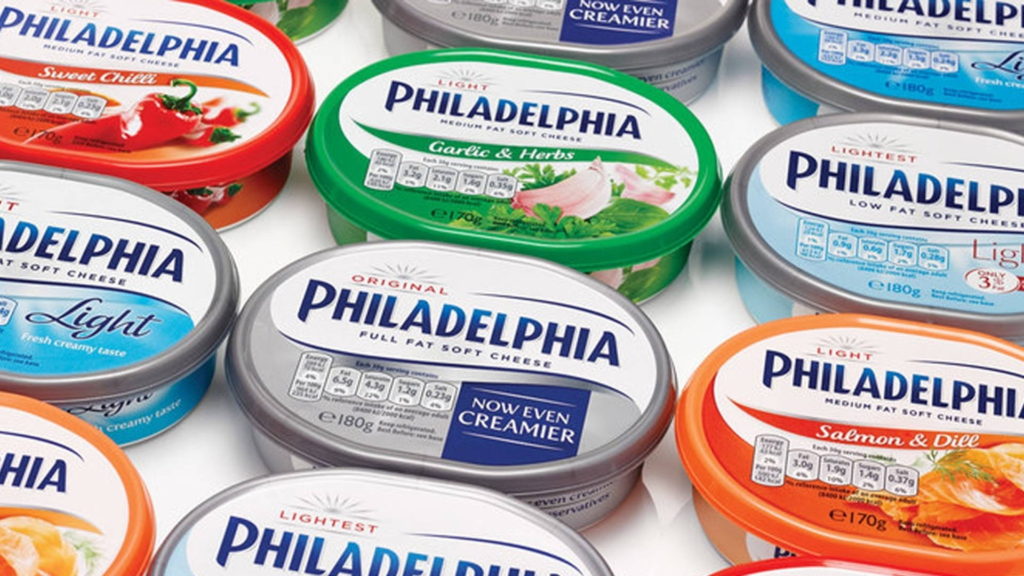 Yes, in a lot of ways, 2021 was not the best of years … and I didn’t even talk about the toxic political atmosphere. Just six days into ’21, of course, there was a deadly coup attempt against the U.S. government at the behest of the outgoing president, and the tone didn’t improve in the months that followed.

Thankfully, some sunshine did make it through the clouds.

Among the encouraging things: COVID-19 became less threatening for millions and millions of vaccinated Americans … long-promised infrastructure legislation finally got passed … electric vehicles went mainstream … the United States exited its decades-long war in Afghanistan … workers in many industries gained the upper hand, parlaying it into better choices and better pay.

On a personal note, my grandkids — 2-year-old twins Jack and Logan, and their little cousin Owen — somehow managed to get even more adorable. 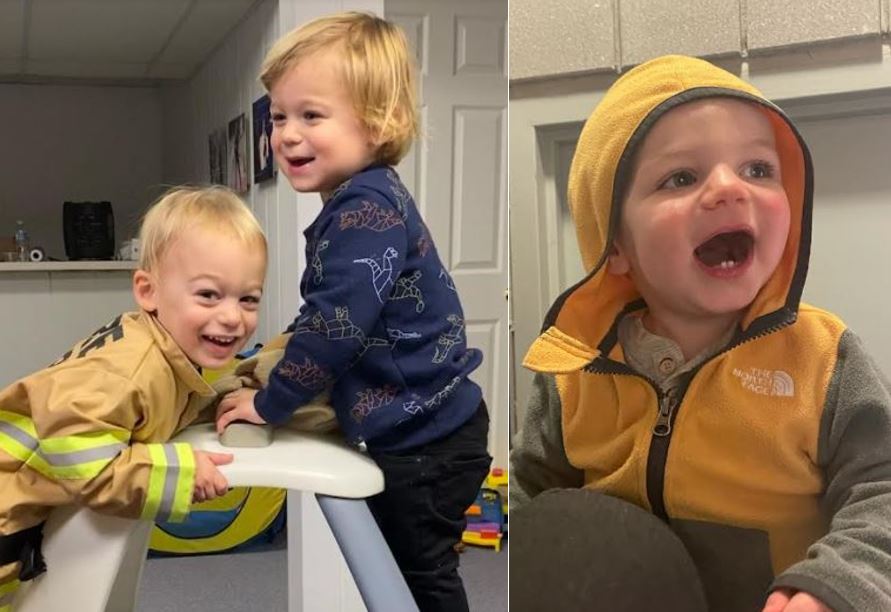 And again, if we’re talking about the good stuff from 2021, we pretty much have to talk about the stock market.

Every sector saw total return of at least 15%. Energy, downtrodden for years, led the way with 53% total return, and the Real Estate, Financial and Technology sectors also beat the S&P 500 Index. 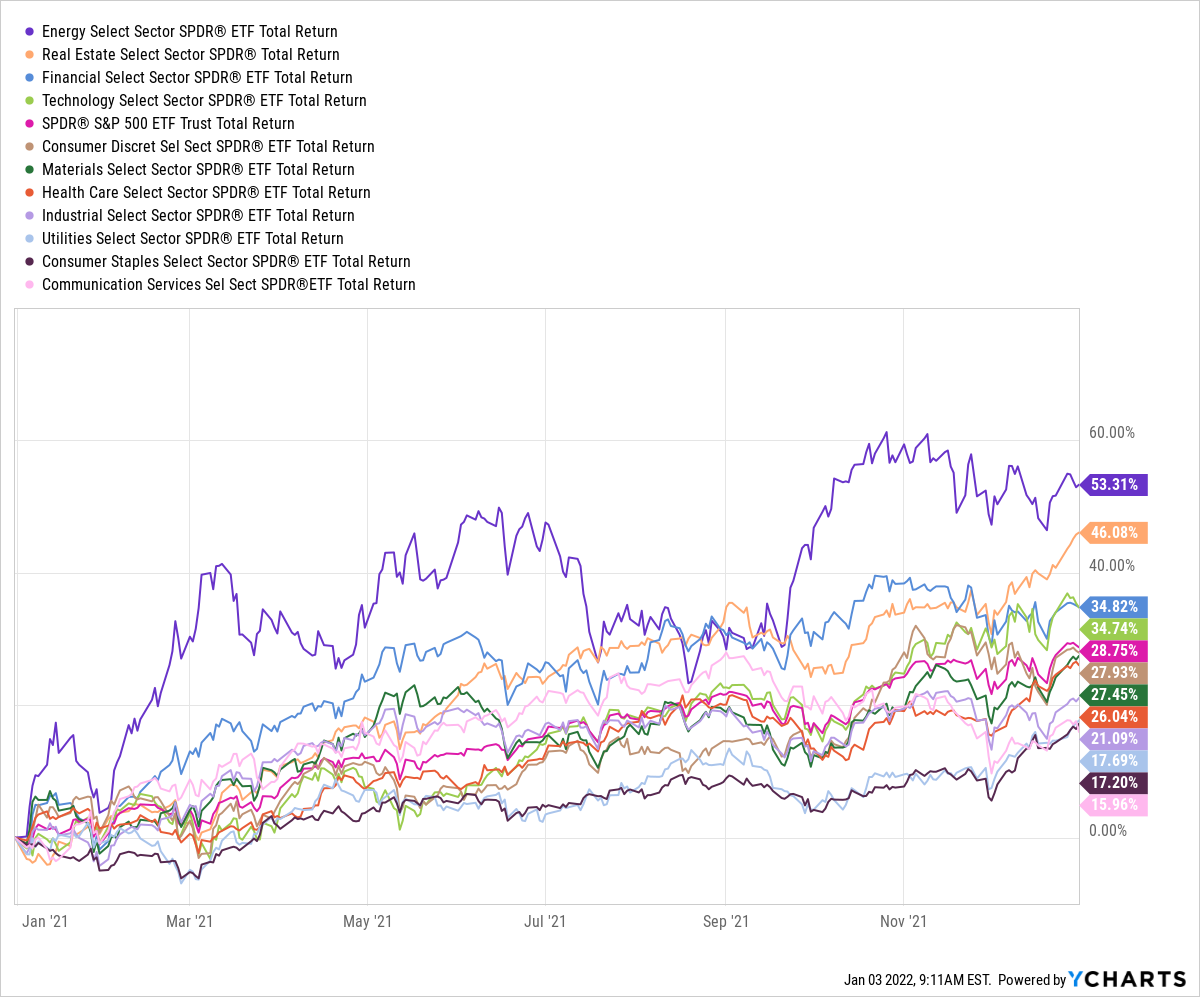 Indeed, stock investors who didn’t do pretty darn well in 2021 probably need to reassess their strategies.

In June 2020, I began building the Grand-Twins College Fund, which one day will be used to help pay college costs for Jack and Logan. In 2021, I renamed it the Growth & Income Portfolio because I felt that would put the focus on portfolio-building concepts and the high-quality companies within the GIP, rather than my own personal goals.

Although I’ve been making only small monthly contributions — usually around $100 — the GIP’s value is approaching $5,000, and it has experienced a 27% total return since its inception. 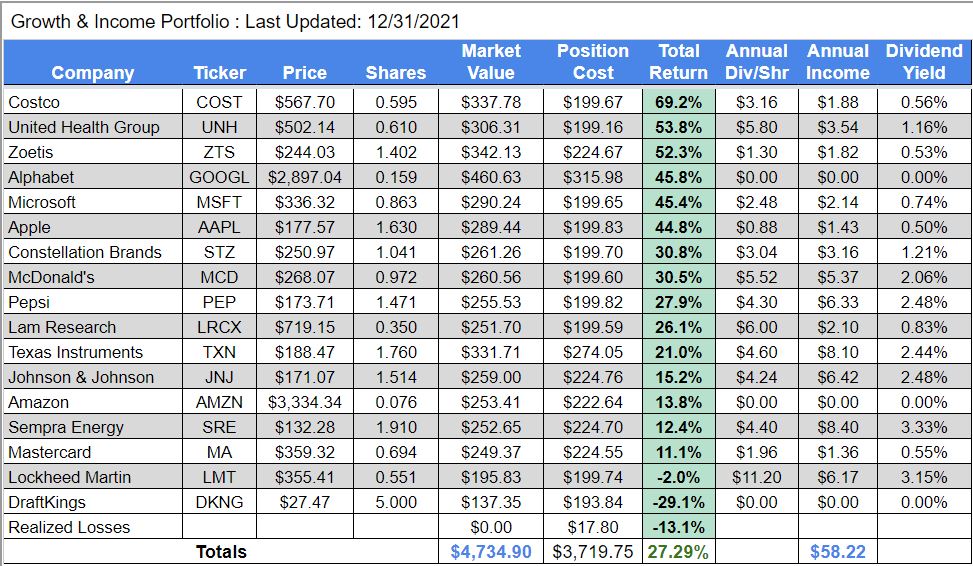 The above table is updated regularly; it, along with links to every GIP-related article I’ve written, can be found on the portfolio’s home page — HERE.

I put most of my December contribution into semiconductor company Texas Instruments (TXN), spending about $74 for about 4/10ths of a share. 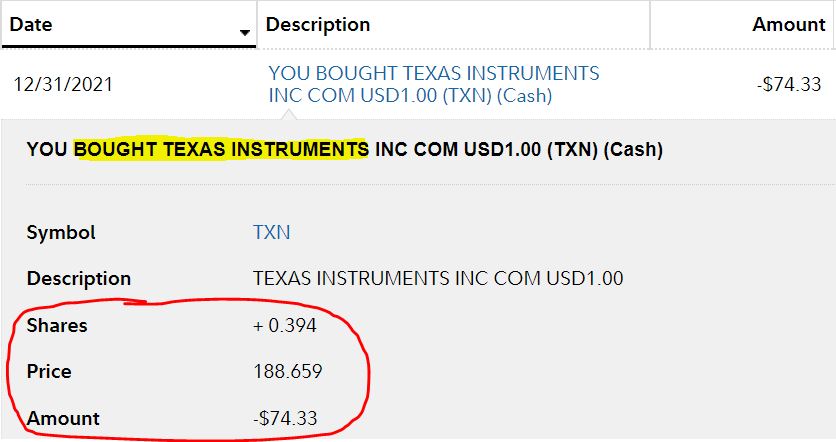 Using the rest of my monthly allocation, I bought a tiny fraction of a share of Amazon (AMZN). And I also bought another small piece of Canada’s Bank of Nova Scotia (BNS) for the separate college fund I started for Owen and his soon-to-be-born little sister (as first discussed HERE).

Texas Instruments has a long and storied history of innovation, having introduced the transistor radio, the handheld calculator, the single-chip microprocessor and other major advances in electronics.

Today, TI is one of the largest semiconductor companies in the world, and it is No. 1 in the analog-chip sub-industry. 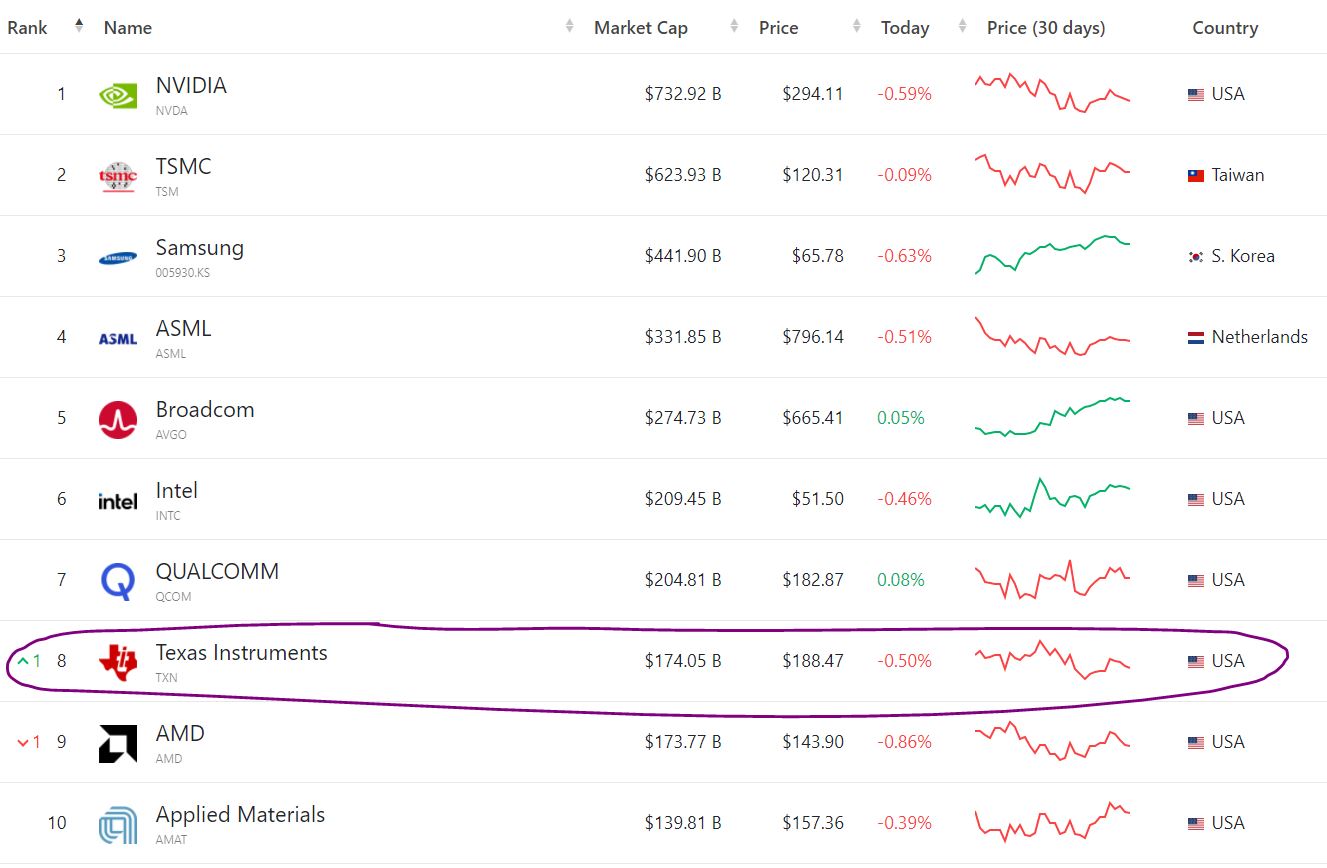 Given that seemingly everything in the world needs semiconductors to function today, Texas Instruments is an important company … and Morningstar analyst Brian Colello does a fine job of explaining the attractiveness of TXN as an investment:

Texas Instruments is the world’s largest analog chipmaker and a key supplier of embedded chips into a wide range of applications. We remain encouraged with Texas Instruments’ relentless focus on higher-margin analog and embedded semiconductors, and when combined with smart operational moves on the manufacturing front, we foresee robust free cash flow generation in the years ahead.

Texas Instruments has a leading share of the fragmented yet lucrative analog chip market. Analog chips are used to convert real-world signals, such as sound and temperature, into digital signals that can be processed. We believe Texas Instruments has a wide economic moat because it benefits from intangible assets around proprietary analog and embedded chip designs, as well as customer switching costs. Since analog chips are neither particularly expensive, nor do they require cutting-edge manufacturing techniques, high-quality analog chipmakers tend to retain design wins for the life of the product, yet maintain healthy pricing and strong profitability on such sales over time. Additionally, Texas Instruments’ size allows the firm to compete across a broader spectrum of industries, without its fortunes tied to a single customer or end market.

Texas Instruments has spent much of the past decade focusing on its analog chip business, especially by producing its chips on more advanced 300-millimeter silicon wafers. This focus has led to healthy gross margin expansion, and while the “easy” expansion is over, we still foresee additional expansion in the years ahead. Texas Instruments’ embedded chip business is a bit more exposed to the automotive and communications infrastructure end markets, but should also see healthy growth over the next few years. The “Internet of Things” is an interesting tailwind for TI, as the company’s chips could be key components in a massive array of new electronics devices with improved connectivity and processing power.

Earnings have quadrupled for Texas Instruments since 2013, with double-digit growth in earnings per share almost every year.

Trade tensions between the United States and China dented the bottom lines of Texas Instruments and other chip companies in 2019. But EPS has recovered smartly since, with 2021 expected to have been robust when full-year figures are released.

It’s also been a great year for sales, following a number of other good years.

Texas Instruments revenue (in billions of dollars), from SimplySafeDividends.com

Other financial metrics also have been very strong for TI, which is something of a free-cash-flow machine. 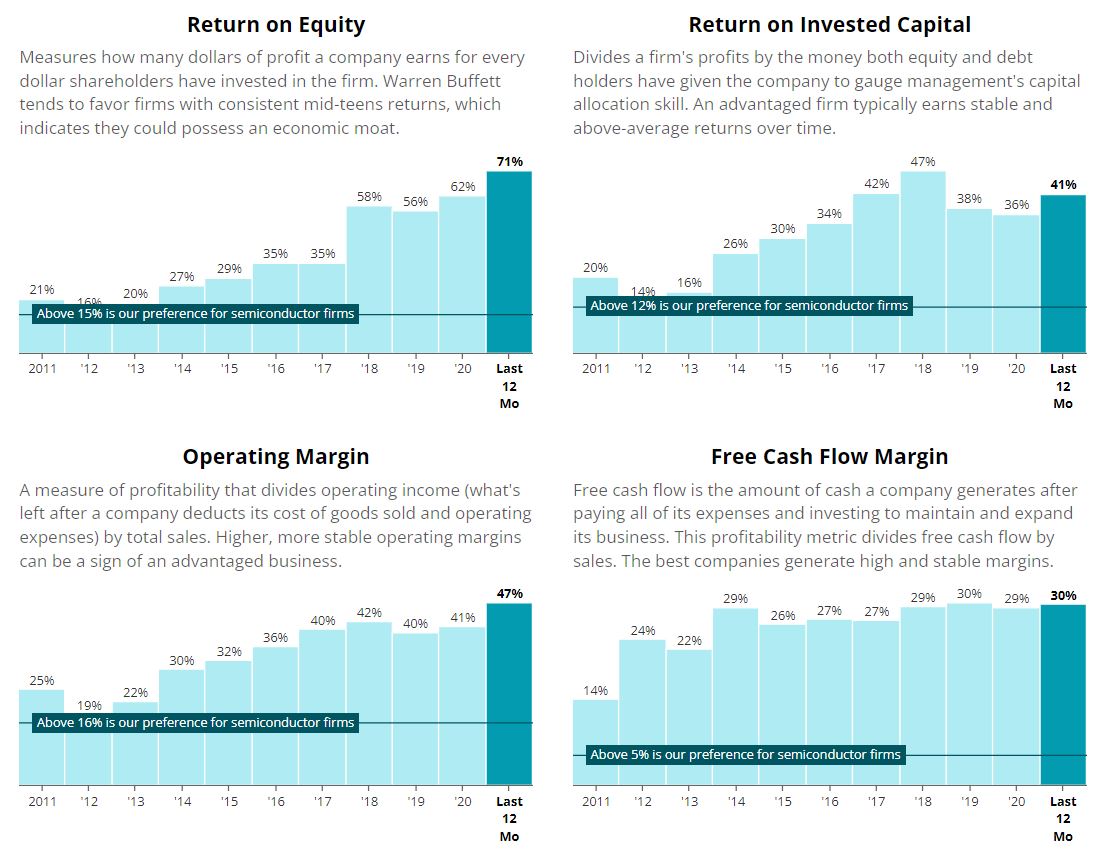 Despite this positive showing, Texas Instruments’ stock price stumbled after a hot start to 2021.

Hurt by supply-chain issues and other concerns about its industry, and perhaps by the company’s less-aggressive-than-expected buyback plan, TXN actually experienced negative total return after April 5. 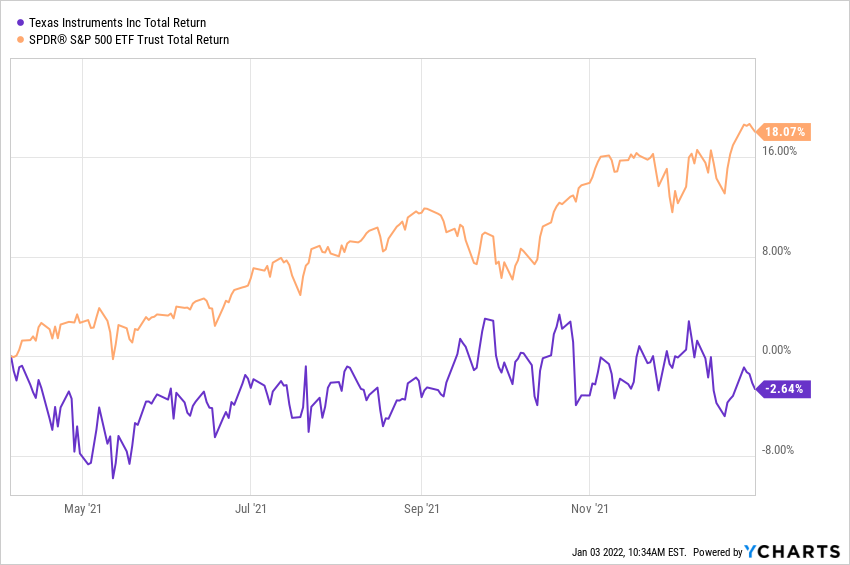 That’s a stark contrast to its market-beating performance over the preceding 1, 3, 5, 10 and 20 years.

Indicating that the pullback made a strong company more appealing to investors, Jefferson Research improved its valuation rating for TXN from Medium Risk to Low Risk. 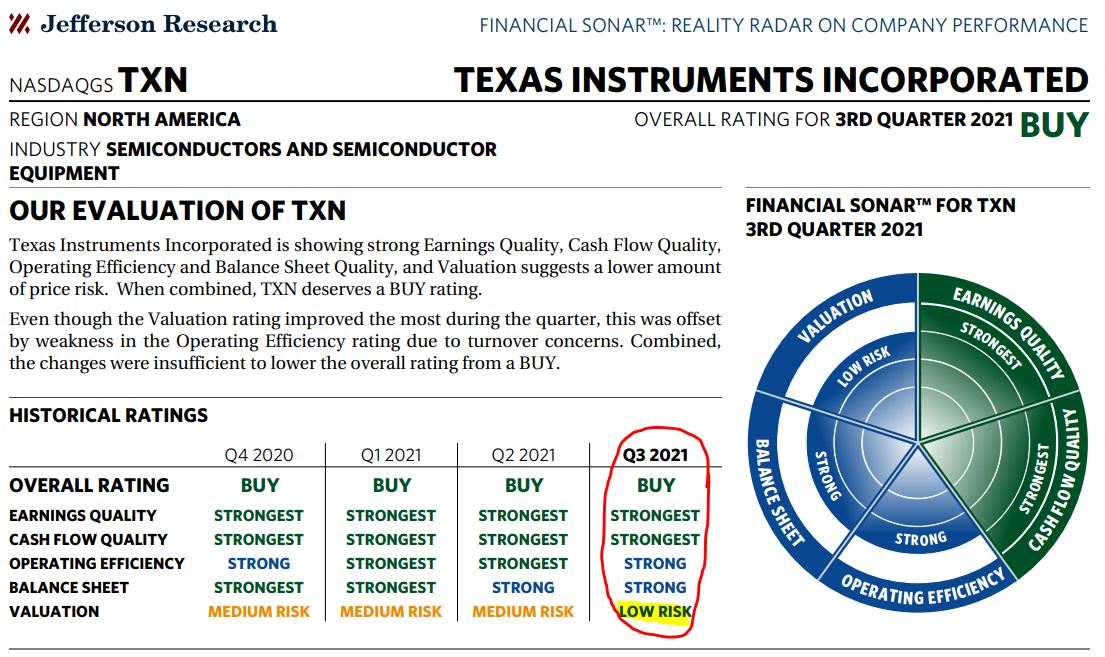 Analysts generally see a solid year ahead for the company’s stock, with 10 of the 15 monitored by TipRanks calling TXN a “buy,” and with the average 12-month target price suggesting about a 15% upside.

Texas Instruments gets sky-high quality grades across the board.

The last column in that table — the dividend safety rating from Simply Safe Dividends — shows the strength and reliability of Texas Instruments’ payout to shareholders.

TI has been growing its dividend annually for almost two decades, and the average increase has been impressive. 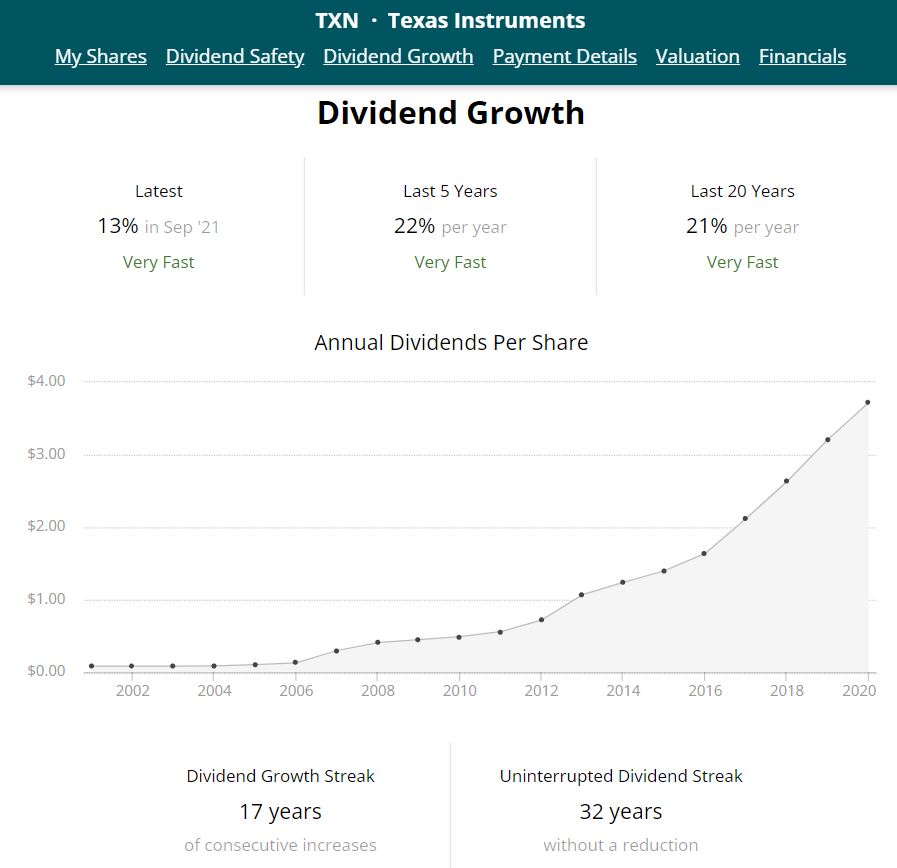 Although “Growth” is the first word in this portfolio’s name, I also expect the GIP to produce a dependable, increasing income stream.

Six of the portfolio’s 14 dividend payers had distributions in December, with $6.02 coming into the portfolio. As always, the income each stock produced was reinvested right back into each equity, adding a fraction of a share of each. 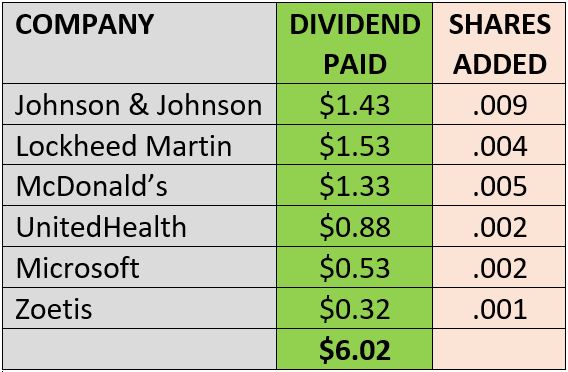 I know that 6 bucks might not seem like much income, but that’s 22% more than the $4.94 that same six positions paid in September — and more income growth is on the way soon.

On Dec. 7, animal-health company Zoetis declared its dividend raise for 2022, a sensational 30% hike that shouldn’t have been much of a surprise considering the company’s history of double-digit-percentage increases since it started paying a dividend in 2013.

Even after the raise, Zoetis only yields about 0.5%. That’s fine with this investor, as I really appreciated the stock’s 48% total return in 2021. For ultra-low-yielding growth stocks, I look at the dividend as a nice little bonus.

While components such as Zoetis, Costco (COST), UnitedHealth Group (UNH), Alphabet (GOOGL), Microsoft (MSFT) and Apple (AAPL) have performed superbly for the Growth & Income Portfolio, DraftKings (DKNG) has had a rough time.

The online gambling company is down 61% since hitting its all-time high on March 19, and our position showed a 29% loss at the end of 2021. But I still think it has a promising future so I’m going to hold on for awhile. 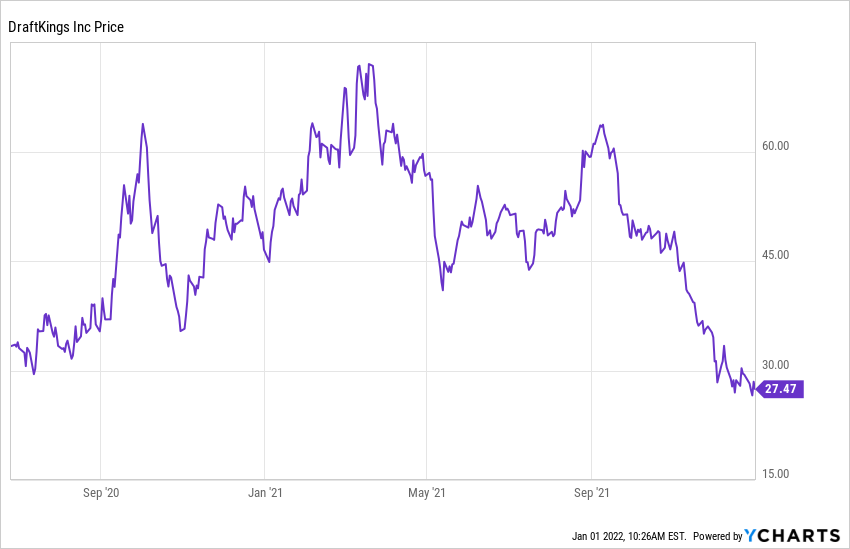 The contrast between GIP leader Costco and laggard DraftKings is kind of a microcosm of 2021 — there was good and there was not-so-good.

Hopefully, 2022 will follow the lead of the Growth & Income Portfolio’s overall performance and bring a whole lot more good than bad. I know these little guys sure would appreciate it!

For those who like investments that produce more dividends, take a look at my other real-money project, the Income Builder Portfolio — HERE.

I also do videos for our Dividends And Income Channel on YouTube. Check out my latest — HERE.