There are some great businesses that we simply never think about. We use their products regularly without even realizing it.

They rake in profits, their stock prices rise long-term, and they pay reliable, growing dividends … but most people have never heard of them.

One such business: Air Products & Chemicals (APD), one of the world’s largest makers and distributors of gases for industrial use.

Here’s an example of how Air Products affects people’s lives without them knowing it: The company has developed carbon dioxide and nitrogen systems for breweries and taverns, so the beer we drink isn’t flat. 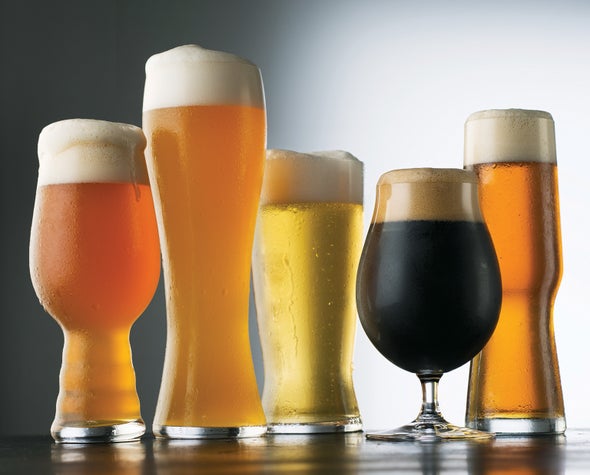 Here’s another: Air Products’ gases are critical to the testing, assembly and packaging of semiconductors that are used to make many of the cellphones, tablets and other gadgets we can’t put down.

As an investment, APD’s stock has been sneaky-good, too. It’s outperformed the overall market over the last 3, 5, 10 and 20 years; and it’s a Dividend Aristocrat, having grown its payout to shareholders for 39 consecutive years. 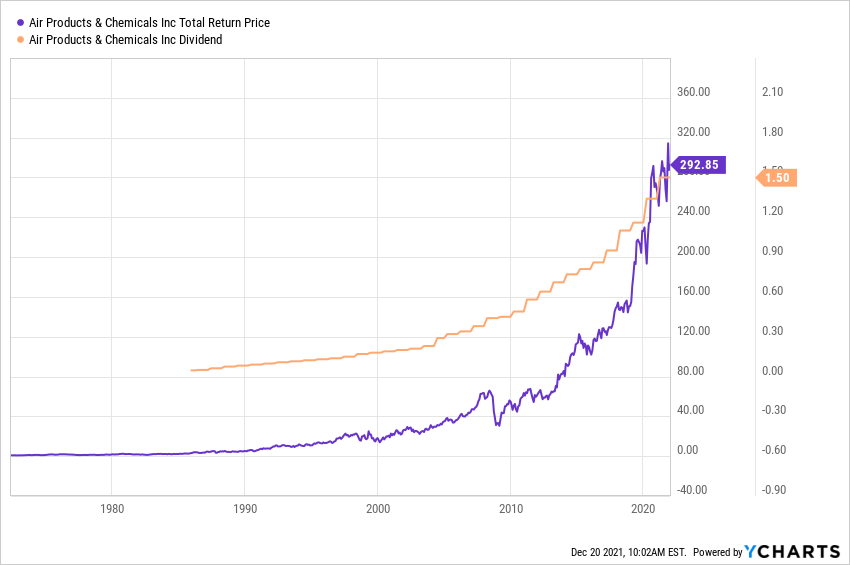 In this article, I’ll talk about this company’s history and its financial picture, why I felt it was a good addition to our Income Builder Portfolio, and how it might appeal to Dividend Growth Investing proponents.

An Air of Superiority

The Air Products story began in Detroit in 1940, when a businessman named Leonard Parker Pool founded the company to produce and market industrial gases.

Sales were slow at first, so the company concentrated on aiding the World War II effort by producing oxygen generators to be used in high-altitude flights by the U.S. military and its allies.

After the war, the company moved to Allentown, Pa., where its headquarters remain to this day.

With the Russians’ launch of Sputnik in 1957, the Pentagon commissioned Air Products to make a new rocket propellant known as liquid hydrogen for the Air Force and later NASA. 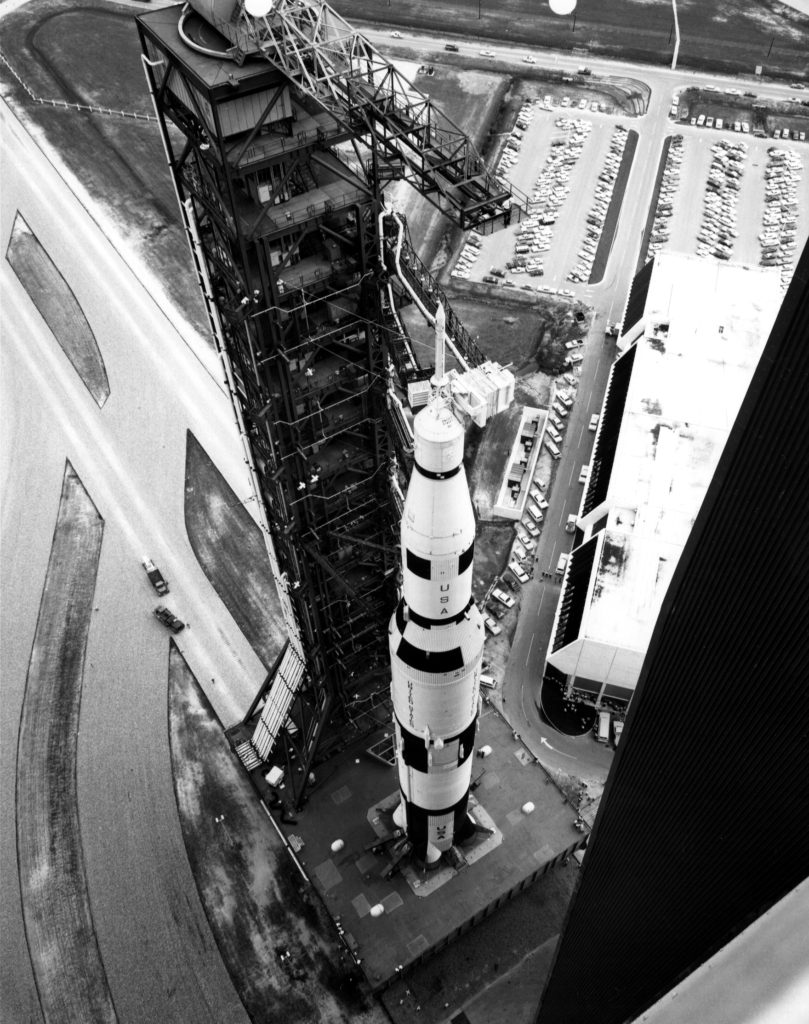 Air Products entered the chemicals industry in 1961, converting refinery by-products into oxo-alcohols for use in producing plasticizers.

In 1962, the company began being trading on the New York Stock Exchange under the symbol APD. Its sales passed $100 million that year.

In the 1970s, Air Products marketed “Cryo-Quick” food freezing units that made it possible for restaurants (such as McDonald’s in the photo below) to centralize food processing. 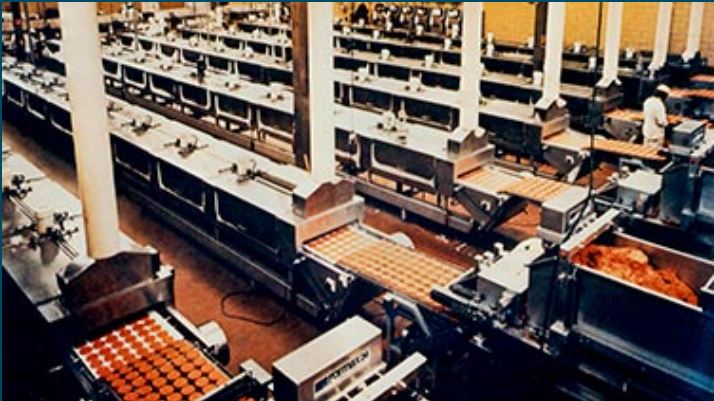 Also in the ’70s, Air Products signed a 12-year contract with NASA to supply liquid hydrogen to the new U.S. space shuttle program. In 1978, on the strength of $1 billion in sales, the company made the Fortune 500 list for the first time. 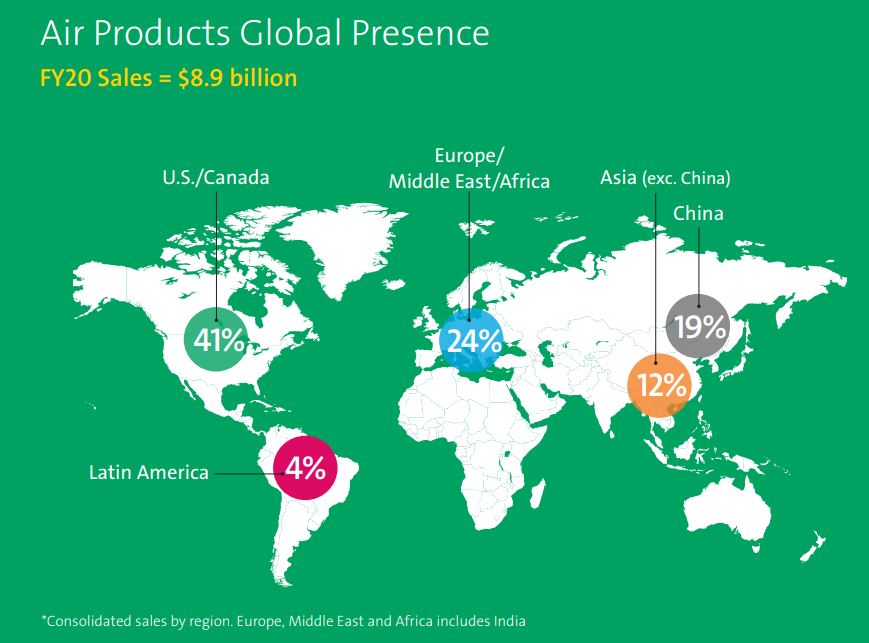 In the 1980s, the company formed an environmental and energy systems business that focused on power generation, air pollution control, and energy recovery from solid waste.

In the 1990s, Air Products further entrenched itself in electronics by becoming the global leader in production of nitrogen trifluoride — the main chamber cleaning material for the semiconductor industry.

After the new millennium dawned, Air Products introduced a process to make the natural gas liquefaction process more efficient, and it opened a hydrogen fueling station in its Allentown headquarters. 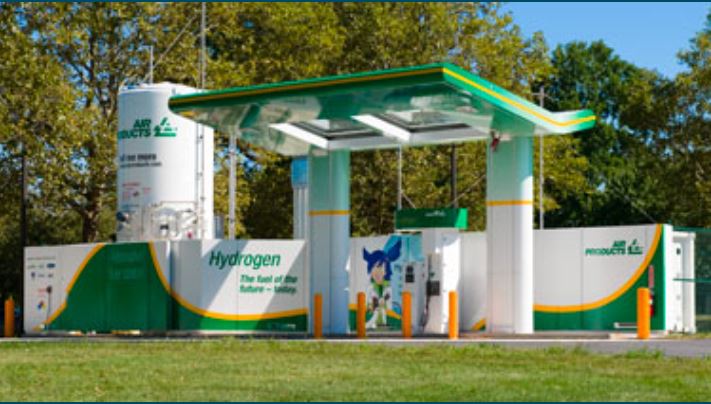 In 2014, Seifi Ghasemi was named CEO, and he quickly oversaw the spin-offs of both the electronic materials and performance materials divisions so Air Products could become a pure-play industrial gases company. 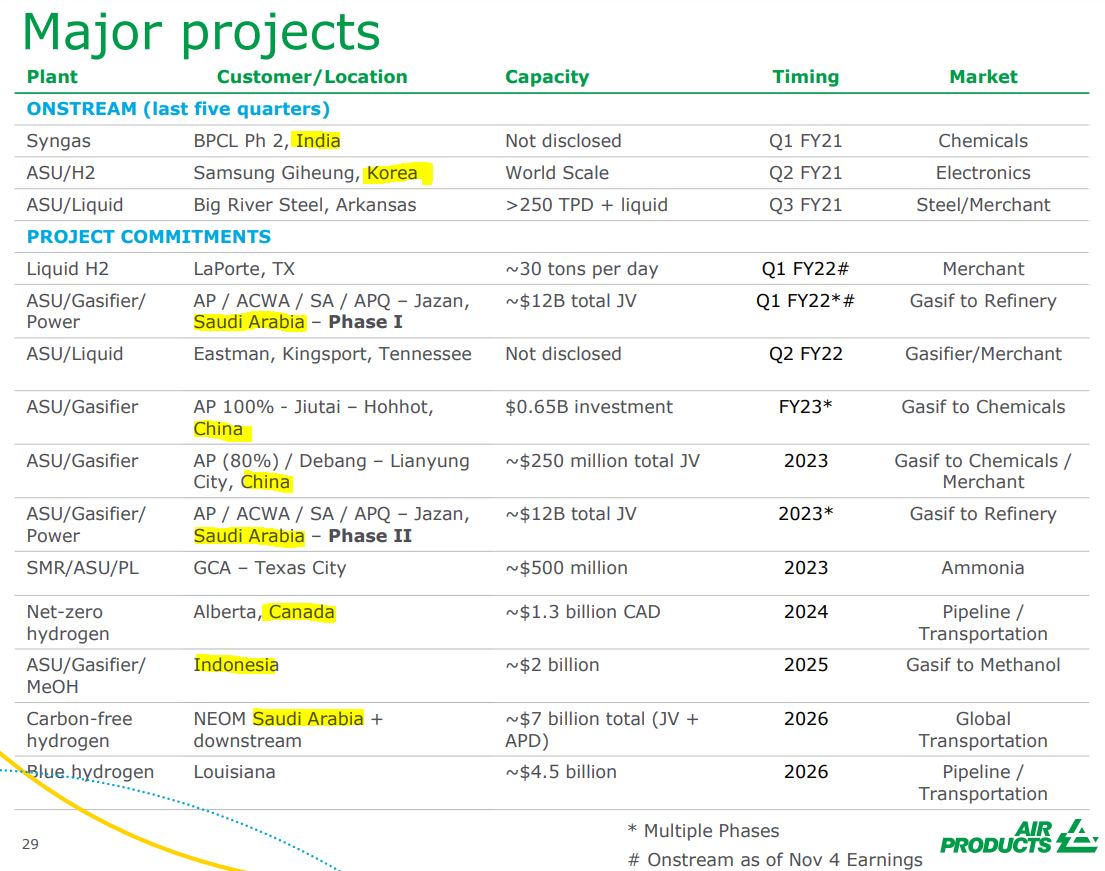 On its website, Air Products includes an A-to-Z list showing how it “touches your life every day.”

Aside from the obvious — such as the helium in balloons — products that use APD gases include fiber optics, glass, ice cream (and other foods), light bulbs, paint, tires, underwater exploration gear and X-rays.

Sure, it’s a marketing campaign … but I’d say it’s a pretty darn effective one.

Air Products & Chemicals wrapped up a very successful 2021 fiscal year at the end of September. At its Nov. 4 presentation, the company detailed its numbers: 17% sales growth, 8% improvement in adjusted earnings per share, and 7% higher adjusted EBITDA. 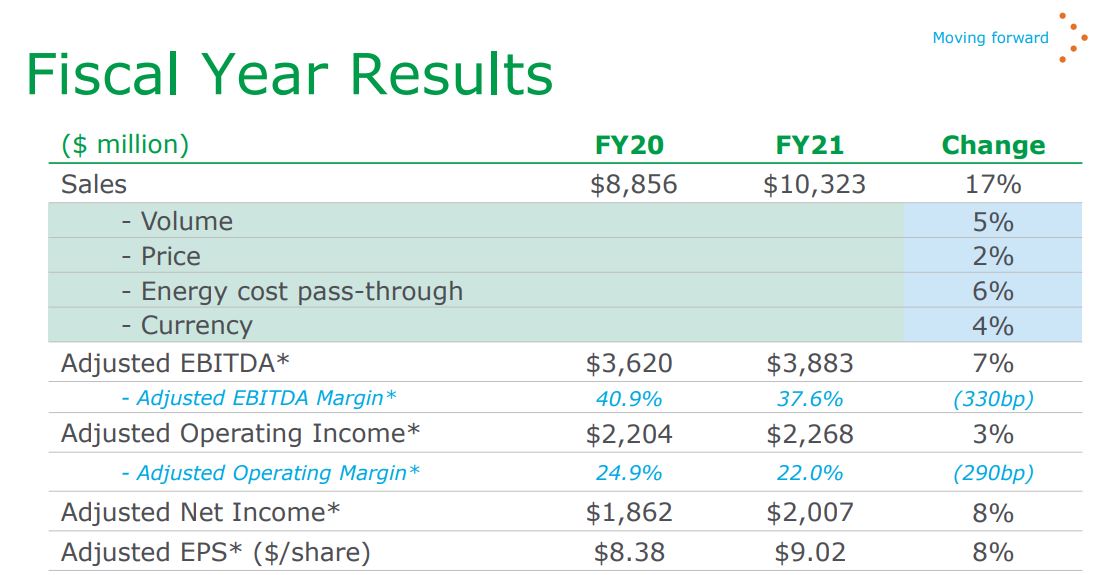 Despite an increase in energy costs and other inflationary headwinds, the 4th quarter showed year-over-year growth of sales by 22%, adjusted earnings by 15% and adjusted EBITDA by 11%. 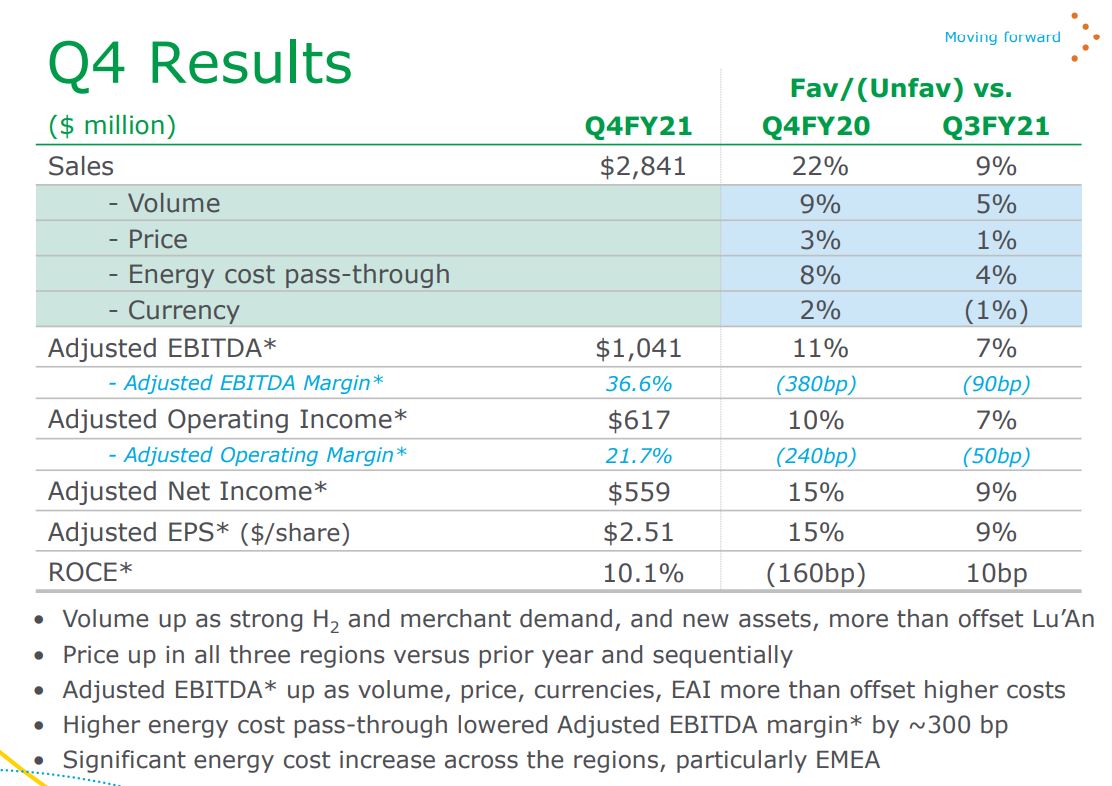 Because investing is primarily a forward-looking pursuit, I like seeing the company’s projections of 16% to 20% year-over-year EPS growth for the first quarter of 2022, and 13% to 15% for the full year.

None of the earnings growth is very surprising when one looks at the company’s history. 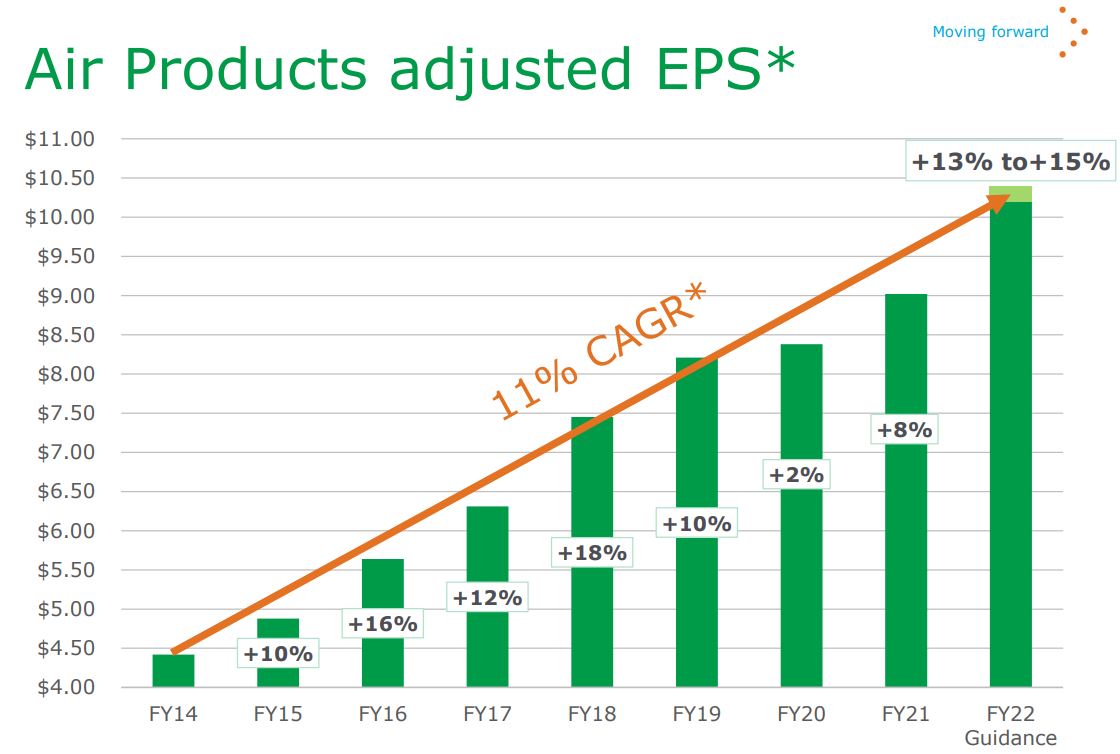 And the good news just keeps coming. A few days after the earnings report was released, Air Products reached a $15 billion deal with the Indonesian government to develop a coal gasification system that will be aimed at converting “low-value coal into high-value-added chemical products” such as methanol, enabling Indonesia to move away from raw natural resources.

Value Line says APD’s financial picture is one of the very best in its industry.

For that matter, it’s hard to beat Air Products’ quality scores across the board.

Morningstar does a nice job explaining why the company has such a predictably strong business model:

Industrial gases typically account for a relatively small fraction of customers’ costs but are a vital input to ensure uninterrupted production. As such, customers are often willing to pay a premium and sign long-term contracts to ensure their businesses run smoothly. Long-term contracts and high switching costs contribute to industrial gas producers’ moats, helping them generate a predictable cash flow stream and lucrative returns. …

Since Seifi Ghasemi was appointed CEO in 2014, new management has launched several initiatives that drastically improved Air Products’ profitability, raising EBITDA margins by over 1,100 basis points. This remarkable improvement is largely due to significant cost cuts, divestments of low-margin noncore operations, and an aggressive pursuit of opportunities in emerging markets. …

The industrial gas firm aims to deploy over $30 billion during the decade from fiscal 2018 through fiscal 2027 and has already either spent or committed roughly $18 billion. We are bullish on Air Products’ long-term prospects and think that the firm’s ambitious capital allocation plan will fuel tremendous growth for many years to come, driven by investments in traditional industrial gas projects as well as new opportunities including gasification, green hydrogen, and carbon capture.

That’s a pretty attractive business for investors to consider.

Of course, for income investors, a reliable and rising dividend is part of Air Products & Chemicals’ appeal.

The growth of the distribution began when Ronald Reagan was in the White House; six presidents later, the dividend has kept increasing at double-digit-percentages. 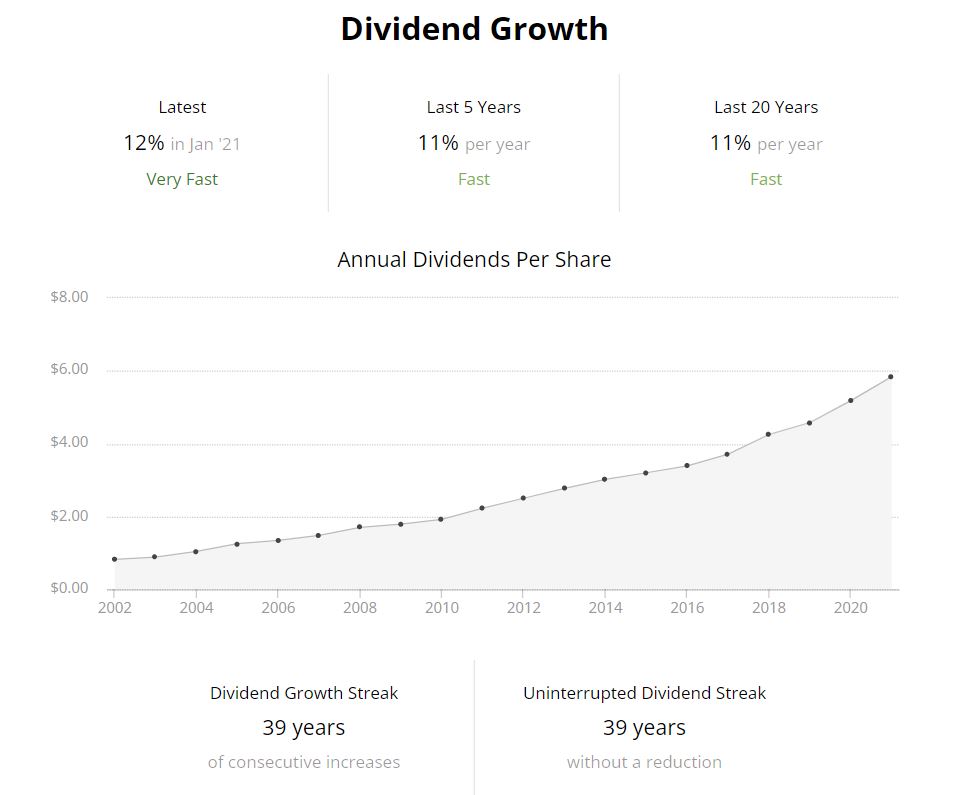 APD’s most recent dividend raise was 12% last January. The annual $6/share payout translates to a 2% yield at the current stock price.

This dividend growth has contributed strongly to the company thrashing the S&P 500 Index in total return over the last 20 years. As the red-circled area of the following FAST Graphs image shows, APD had a big advantage even without counting the dividend; but with it (yellow highlight), APD had about 12% compound annual growth compared to 8% for the index. 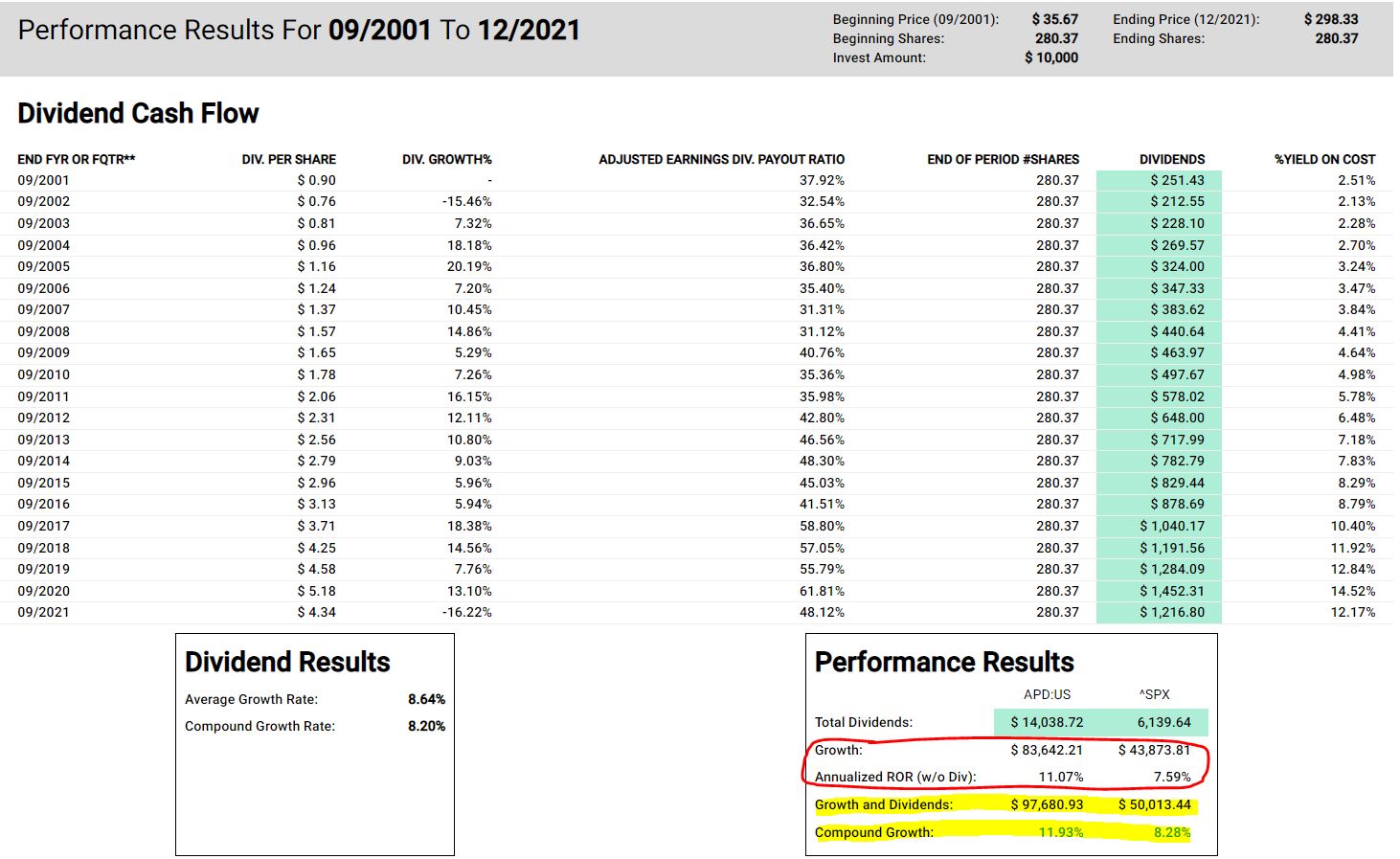 Air Products’ next ex-dividend date is Dec. 31, meaning that investors who want to receive the $1.50/share quarterly payment must own the stock by Dec. 30.

Within a few weeks, APD is expected to raise its dividend for the 40th consecutive year, and I wouldn’t be surprised to see a hike of 10% or more.

Given the current and expected growth in earnings and dividends, and the company’s durable business model, I felt Air Products would make a fine addition to our Income Builder Portfolio.

So on Monday, Dec. 20, I executed purchase orders for roughly $1,000 worth of APD stock at about $293/share on behalf of this site’s co-founder (and IBP money man), Greg Patrick.

APD becomes the portfolio’s 46th position, and it’s expected to generate more than $20 in income over the next year.

The stock price of Air Products & Chemicals has had a nice run, and it’s certainly not cheap with a forward P/E ratio up near 30.

Still, 14 of the the 26 analysts monitored by Refinitiv call it either a strong buy or buy.

Morningstar, which often is conservative with its fair value estimates, actually thinks APD is 12% undervalued. 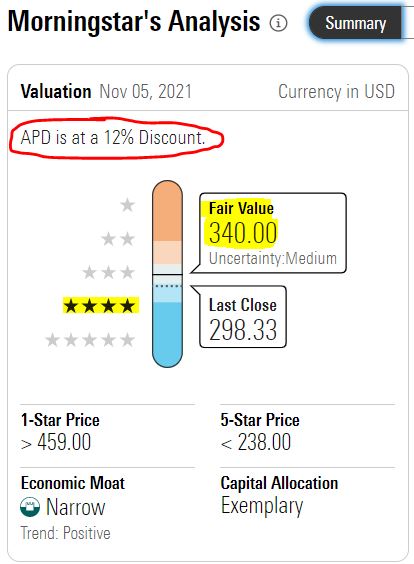 CFRA also sees significant upside, with a $357 price target that is some 22% higher than what we just paid for the IBP’s stake.

So while the IBP’s buy of Air Products might not have been a bargain, it also doesn’t seem we overpaid for our stake in this high-quality company.

APD is the Income Builder Portfolio’s second holding in the Materials sector. It joins paint-maker Sherwin Williams (SHW), which has been a market-crushing performer since we added it on Feb. 8. 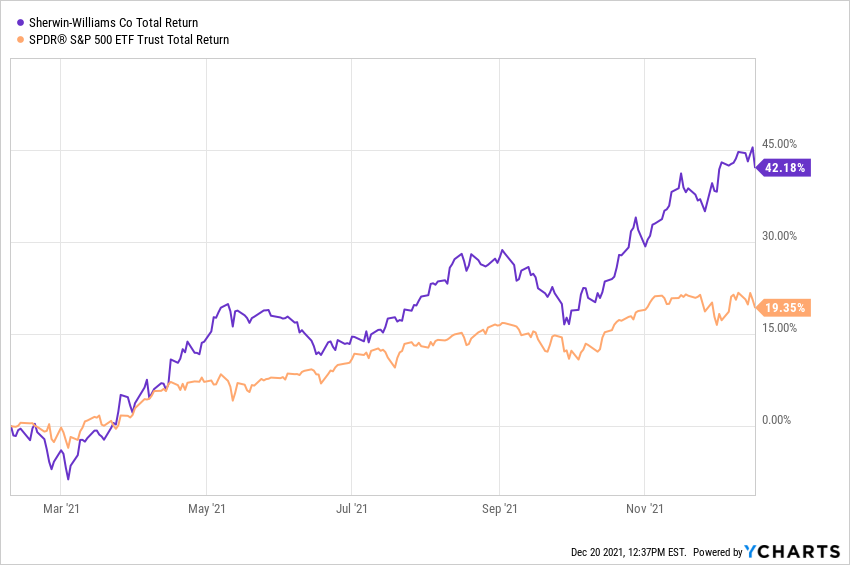 We also now own two companies that are sometimes confused by investors — not because their businesses are similar but because their stock symbols are. Earlier this year, we initiated a position in Automatic Data Processing (ADP).

I promise I’ll do my darnedest to avoid mixing up APD and ADP!

For more on the Income Builder Portfolio, including the table of all 46 positions and links to every IBP-related article I’ve written, see the home page HERE. We also recently published a video recapping the first December buy we made for the portfolio — General Dynamics (GD); check it out HERE.

Investors are strongly encouraged to conduct their own thorough due diligence before buying any stock.