When it comes to multi-tasking … well … let’s just say I have enough trouble uni-tasking!

As an investor, though, I like a company whose employees and management can (unlike me) walk and chew gum at the same time.

For example, General Dynamics (GD) has had great success making both private business jets and weapons of mass destruction.

And GD’s stock has beaten the overall market in total return both long-term and over the last year. 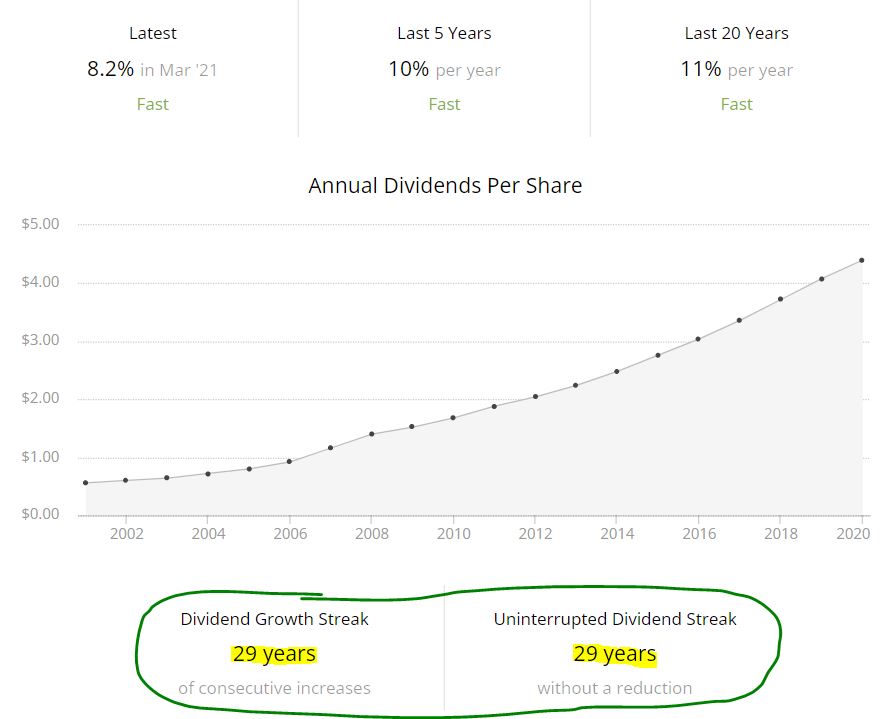 In this article, I’ll talk about General Dynamics’ business, discuss why GD might interest those who use Dividend Growth Investing as a strategy, and detail our latest purchase of the company for the IBP.

A History of Air, Sea & Land

In 1944, Canadair was created by the Canadian government to help with the World War II effort. Two years later, controlling interest in Canadair was sold to Electric Boat Company. And in 1952, General Dynamics was formed to become the parent of Electric Boat.

In 1954, General Dynamics made history when it launched the world’s first nuclear submarine, the U.S.S. Nautilus. 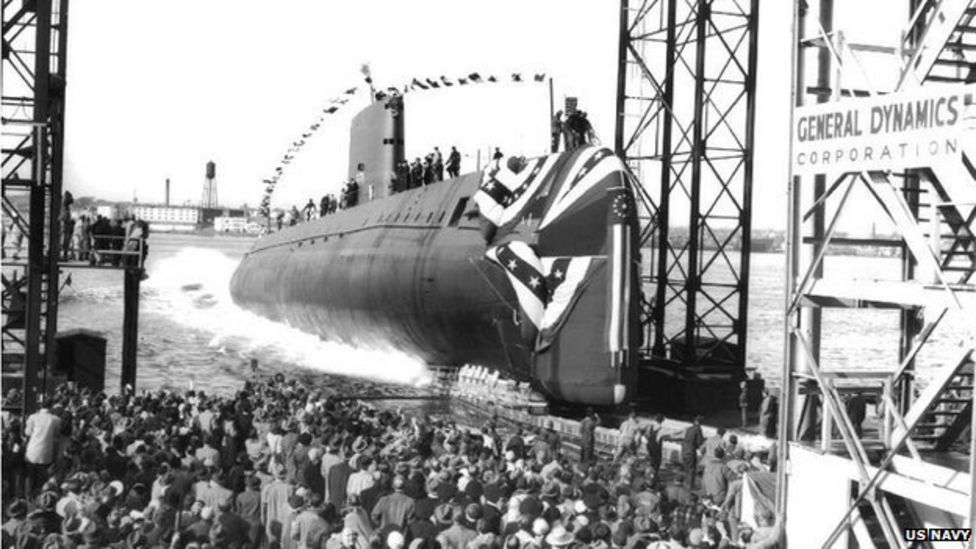 For the next 40+ years, General Dynamics built its business around making submarines, warships, fighter planes, tanks, missiles, rockets and electronic systems for the U.S. military.

In 1985, GD got into the private-jet business, buying Cessna Aircraft.

In the early 1990s, the Pentagon’s spending flurry slowed some, and General Dynamics pared down its operations. It sold its Data Systems division in 1991, Cessna in 1992, the Fort Worth aircraft production business in 1993 and its Space division in 1994.

In 1999, the company capped the shopping spree with its $5.3 billion acquisition of Gulfstream Aerospace — getting General Dynamics back into the private-jet business it had abandoned when it sold Cessna a few years earlier. 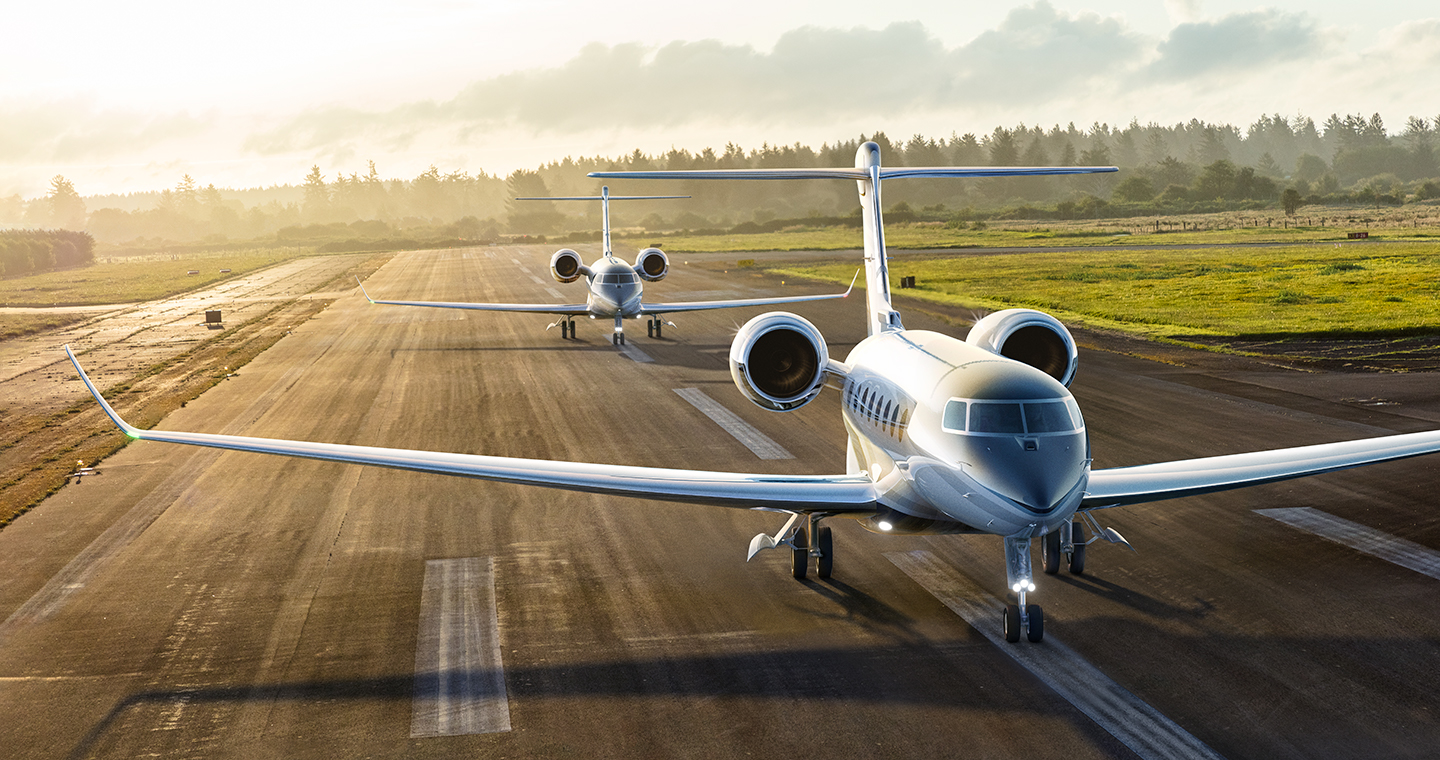 In addition to building up the defense side of its operations, General Dynamics in 2008 acquired Swiss business service provider Jet Aviation.

In 2013, former CIA operative and Pentagon official Phebe Novakovic became GD’s chairman and CEO. She is one of the few women executives in the military-industrial industry, and she regularly makes “most powerful women” and “most influential women” lists. 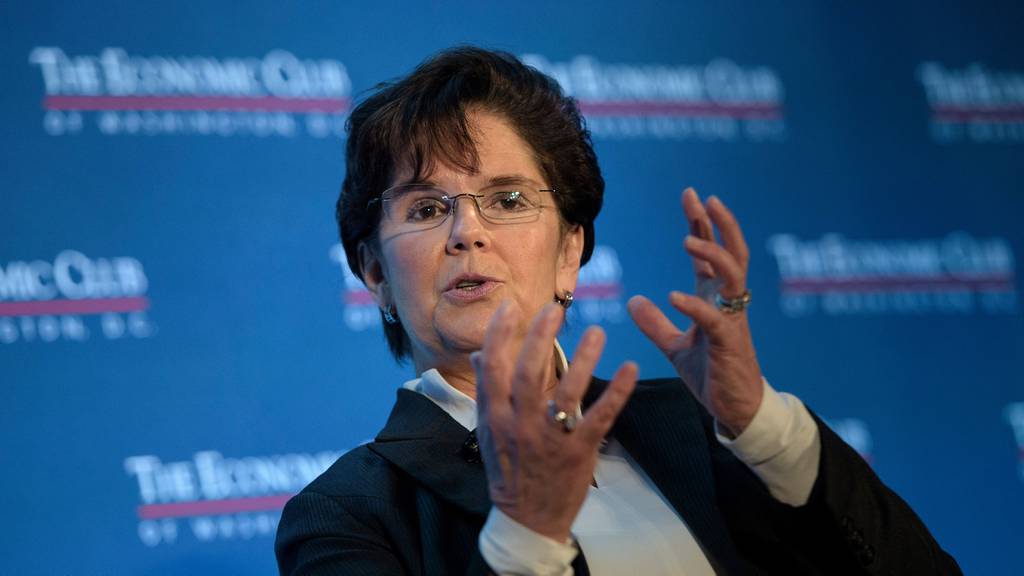 In 2018, General Dynamics made its largest acquisition ever, a $9.7 billion deal for information technology services giant CSRA. It integrated CSRA within its burgeoning GDIT division, a leader in delivering technology to the military.

Here is Morningstar’s outstanding description of how GD makes money:

General Dynamics is about three-fourths defense prime contractor and one-fourth business jet manufacturer. Defense primes rely on defense spending for revenue, and we favor companies with tangible growth profiles through a steady stream of contract wins, ideally to contracts that are fulfilled over decades. General Dynamic’s crown jewel of long-cycle contracts, the Columbia-class submarine, exemplifies this with planned procurement through 2042. Regulated margins, mature markets, customer-paid research and development, and long-term revenue visibility allow the defense primes to deliver a lot of cash to shareholders …

General Dynamics’ business jet segment mostly produces long-range wide-cabin business jets. This market is low volume, at roughly 200 global deliveries each year and many repeat customers. New, quality, product drives demand in this segment, so the company must continuously convince customers that it has built a better aircraft. Gulfstream dominates volume in this segment, with roughly 50% market share, which leads to superior margins due to progression along the learning curve. We anticipate that the introduction of the G700, G800, and G400 in 2022, 2023, and 2025, respectively will be major sales drivers.

During its most recent earnings presentation, on Oct. 27, the company’s data showed it beat estimates for adjusted earnings.

However, revenues failed to meet analyst consensus estimates in three of the four segments — Aerospace, Technologies and Combat Systems — while barely beating expectations in Marine Systems.

Supply-chain delays and semiconductor shortages caused some of the revenue issues, especially in the Technology division. Still, both earnings and operating margins were up in that division. 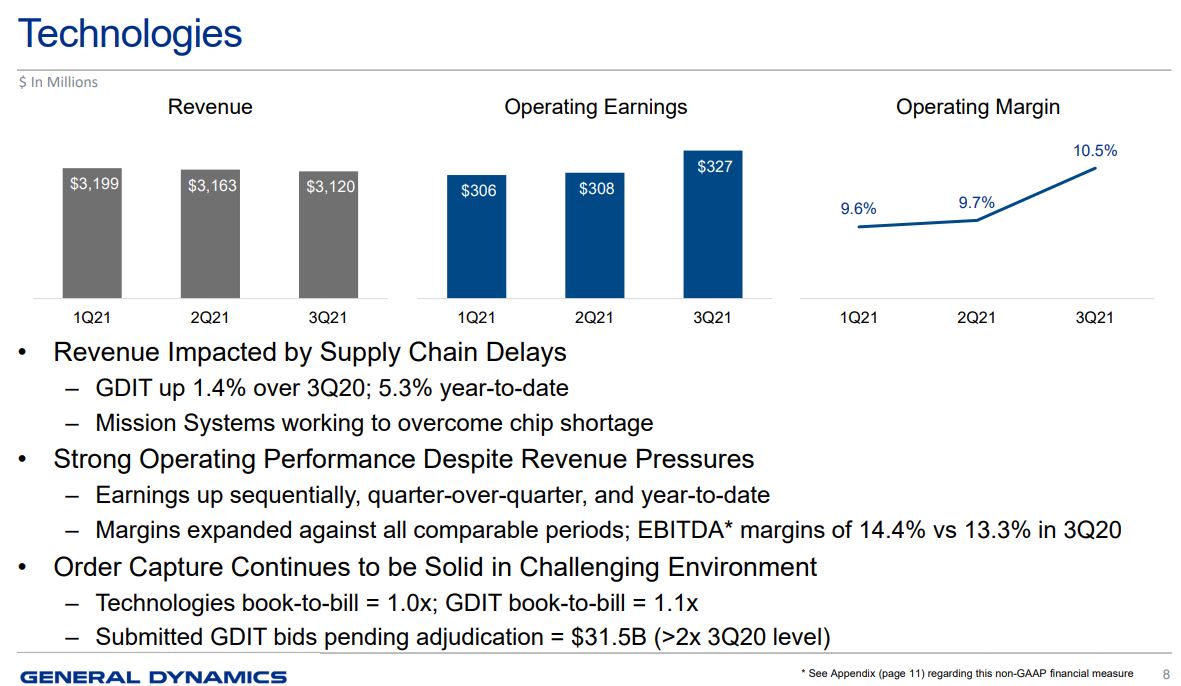 Company-wide, earnings and revenue were up year-over-year and also quarter-over-quarter. 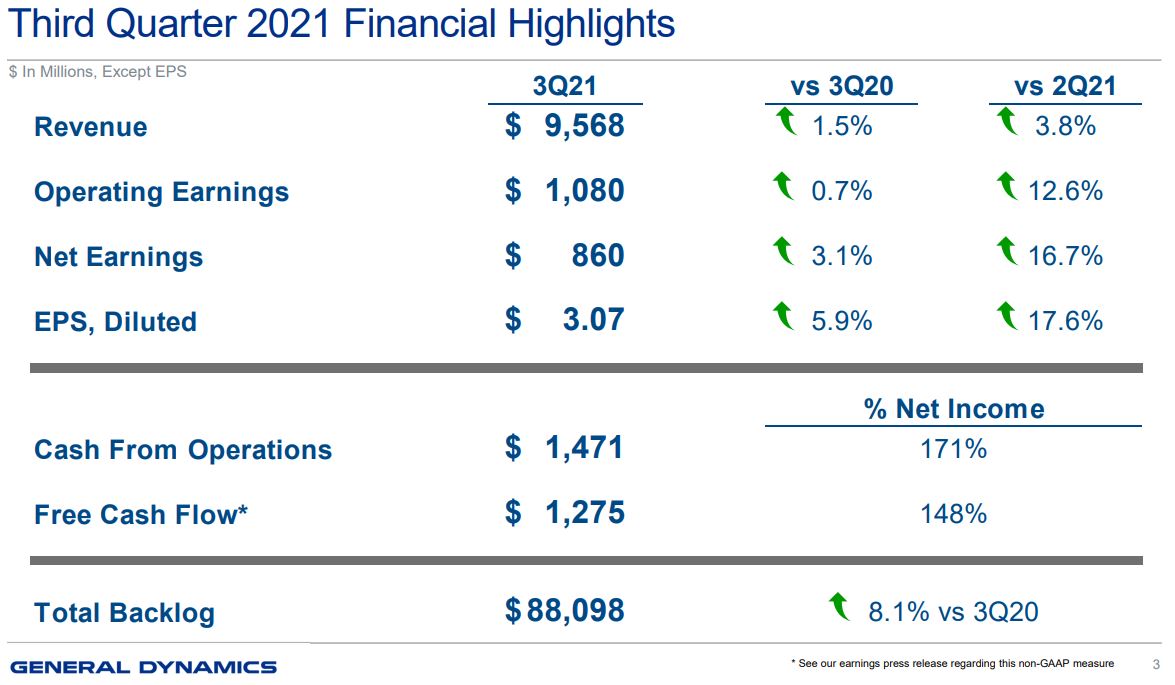 The company did say that the relatively disappointing revenue figures would weigh on full-year sales figures. Mr. Market never likes seeing guidance lowered, and the stock price has declined about 2.5% since then.

Nevertheless, we’re talking about a company with a very strong balance sheet, and a good all-around financial picture. 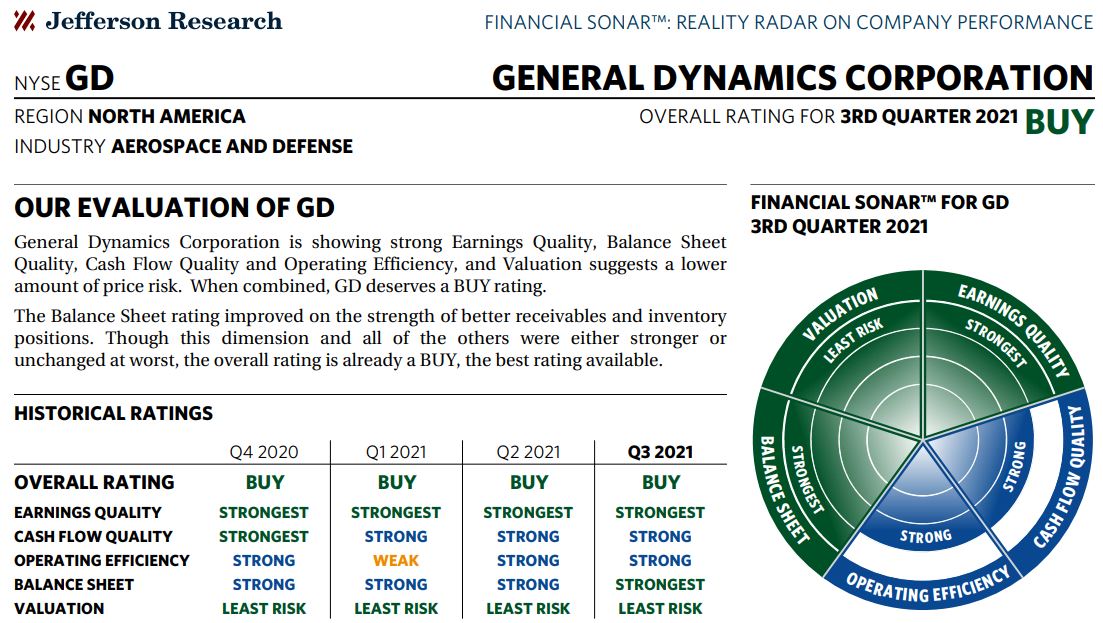 In raising his price target on General Dynamics to $235 on Dec. 1, Cowen analyst Cai Von Rumohr said he was especially bullish on Gulfstream, telling Yahoo Finance:

This has been a funny industry. You know, demand was essentially stagnant for a little over 10 years. And I think a couple of things changed. … COVID basically encouraged people to want the safety and convenience of not flying commercial air travel. And secondly, the number of high net worth individuals increased. So we’ve had a real pickup in demand.

I’ll get into more analyst forecasts and valuation information in a minute. First, let’s talk about the cash GD sends shareholders’ way.

General Dynamic has been a consistent dividend grower. Every March, like clockwork, the company announces an increase in the 8% to 11% range. 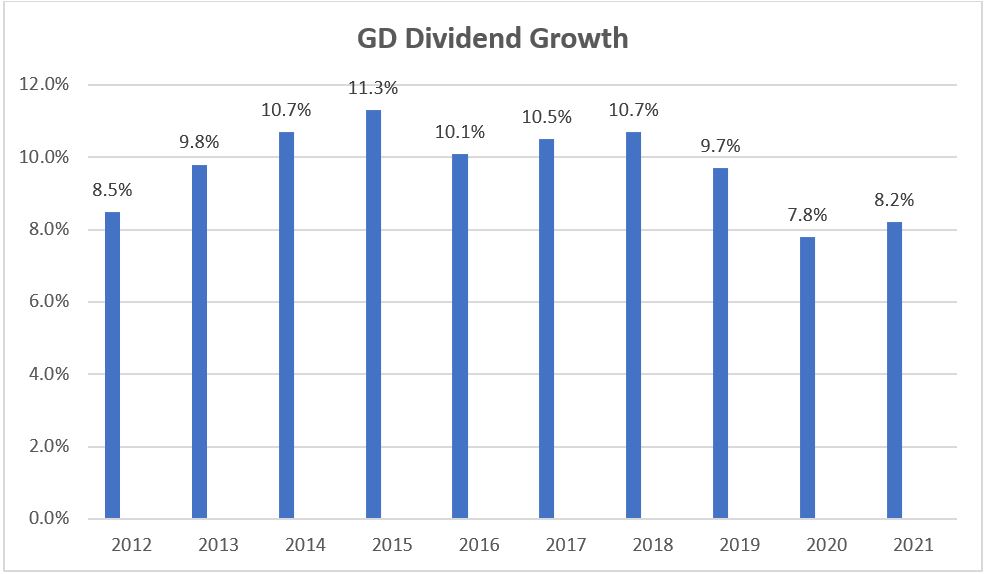 Though it appears the dividend growth is slowing a little, I’m actually pretty impressed with the raises of the past couple of years given the pandemic effect.

General Dynamics is in a cyclical industry, especially its Aerospace division, and the following FAST Graphs image illustrates how its free cash flow (orange line) has risen and fallen over the years. Nevertheless, it also shows how, year after year, the company’s FCF has easily covered the dividend (white line).

Its reliable, growing dividend helped General Dynamics beat the S&P 500 Index long-term. In the red-circled area on the following FAST Graphs image, you can see that, in price growth alone, the index fared slightly better over the last 15+ years. But once dividends are factored in, GD had a superior rate of return. 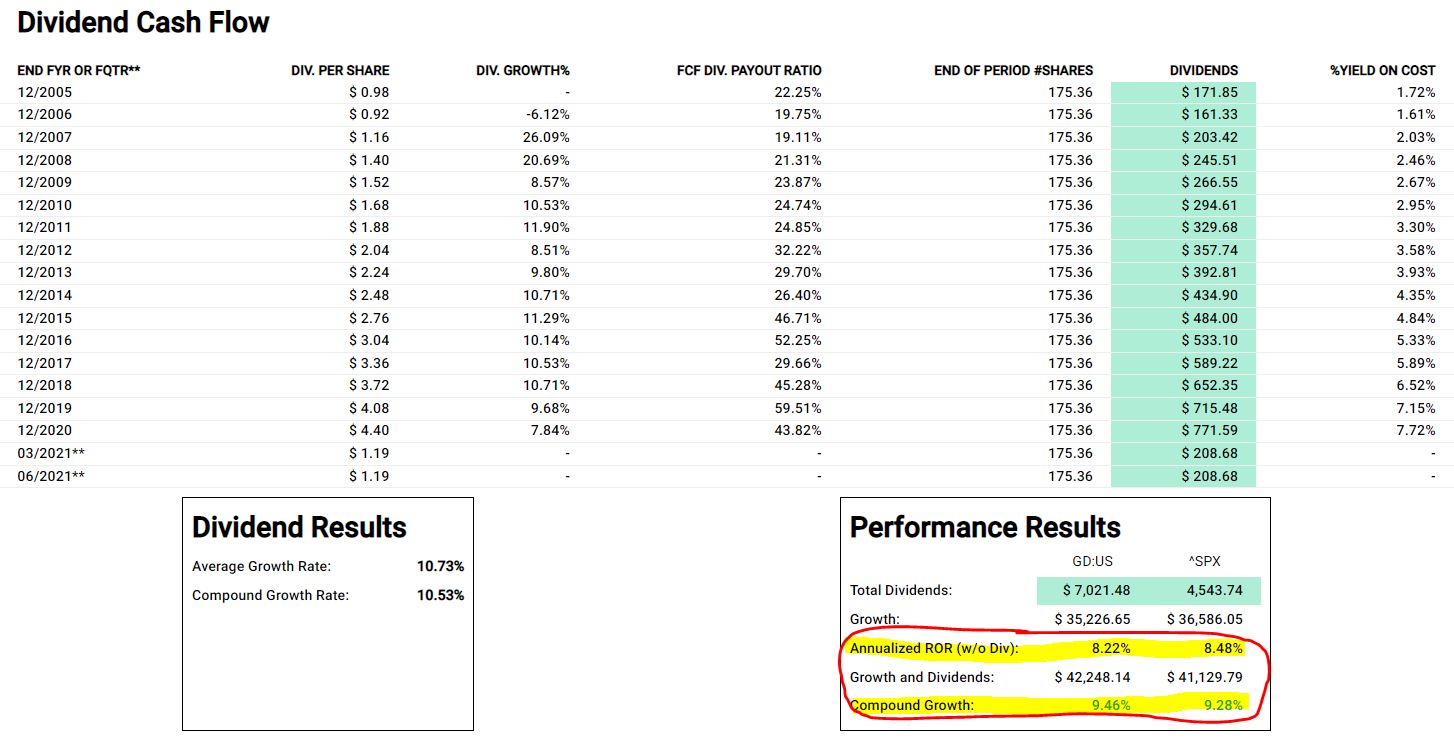 General Dynamics yields about 2.4%, and one thing I really like about its dividend is that investors can count on it.

Simply Safe Dividends gives GD a score of 97 on its 1-to-100 scale. That, along with the company’s status as a Dividend Aristocrat (25+ consecutive years raising its payout), puts General Dynamics at the top of the heap among its peers. 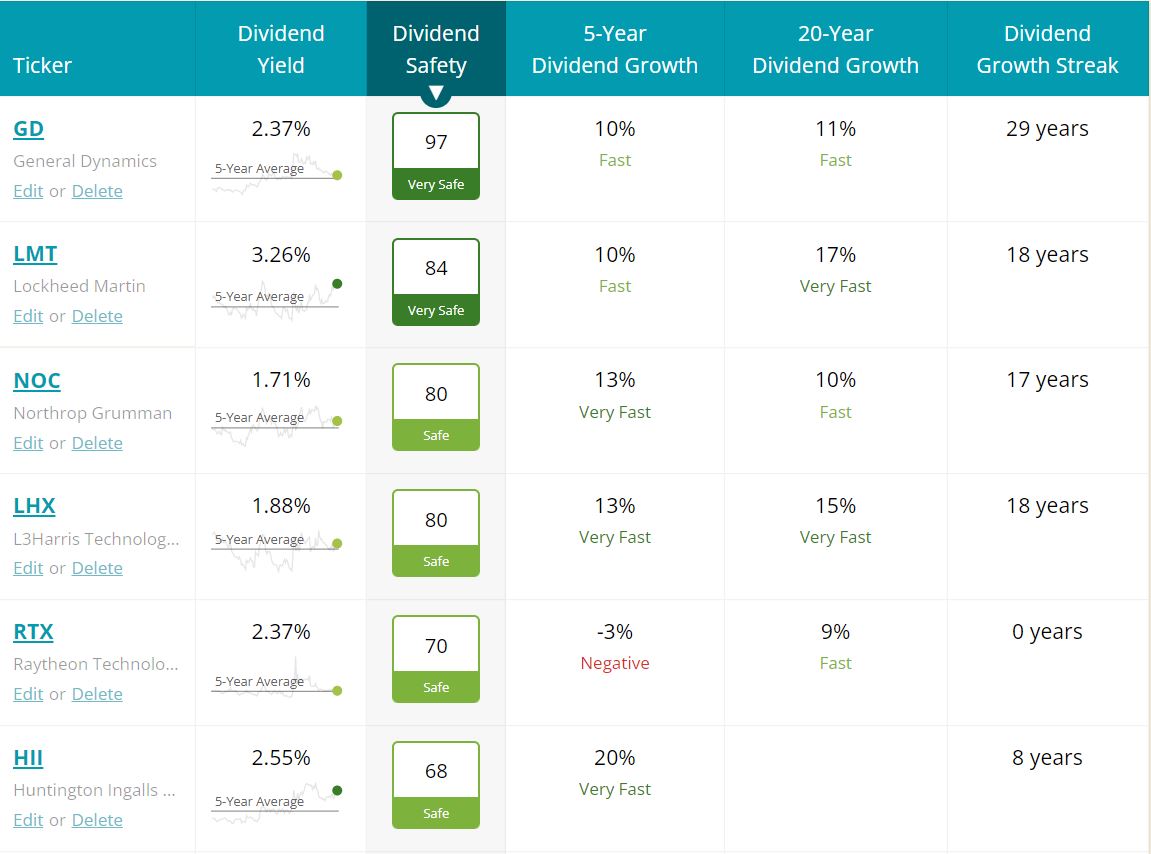 That 97 score is only one of the many outstanding quality-related ratings GD has received. It gets Value Line’s top grades for financial strength (A++) and relative safety (1), Morningstar’s highest “moat” designation (Wide) for competitive economic advantages, and a solid A- credit score from Standard & Poor’s.

Most analysts consider GD to be “buyable,” with 13 of the 20 monitored by Refinitive calling the stock a strong buy or buy. It’s notable, however, that 2 are bearish enough to call it either a sell or a strong sell.

The mean price target of those Refinitiv-surveyed analysts is $228, suggesting about a 14% upside.

In October, Morningstar raised its fair value estimate slightly to $191, and said that’s in “a range we consider fairly valued.” 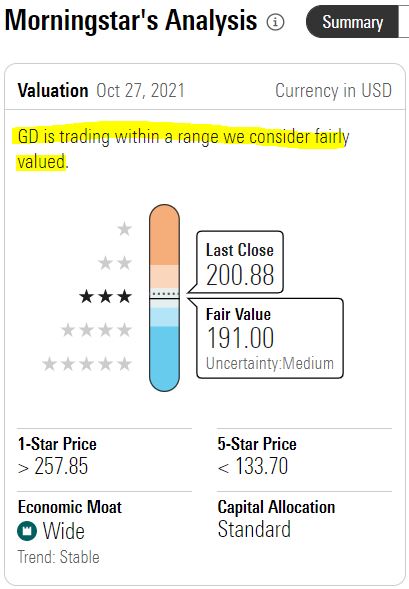 Value Line likes GD’s potential for generating capital gains long-term, with as much as 50% appreciation over the next 3-5 years, but its analysts actually believe shares could lose about 10% over the next 18 months.

That bearish near-term forecast is not shared by CFRA, which calls General Dynamics a strong buy and has a 12-month price target suggesting a 21% return.

Our Strong Buy reflects a positive long-term outlook due to GD’s strong brands, high barriers to entry, a healthy environment for D&G firms, and undervaluation. The D&G segments (78% of sales) will grow through the pandemic and over the long term, in our view, earning roughly $11 per share in 2022. Using a typical P/E valuation for pure-play D&G firms (18x), this alone yields a valuation of $198, equal to GD’s share price as of early November without even accounting for the high-growth Aerospace segment (22% of sales).

We think poor sentiment, not fundamentals, is driving GD’s low valuation, with business travel commonly viewed as unlikely to recover from the pandemic, and Democrats viewed as unfriendly to defense firms. We disagree with both, as U.S. business jets are flying 20% more at present vs. pre-pandemic, and Senate Democrats already approved a 5% defense spending increase from the Trump-era level, not a cut. We see negative sentiment for GD fading in 2022, as Aerospace will fully recover and Democrats will end up materially raising defense spending, in our view. Our target price is 16x our 2023 EPS estimate, which is in line with GD’s five-year forward P/E average.

On Thursday, Dec. 9, I executed a purchase order for 3 shares General Dynamics at $200 each on behalf of this site’s co-founder (and Income Builder Portfolio money man) Greg Patrick.

All stocks were bought via limit orders. As occasionally happens, the 3-share buy of GD occurred in two separate transactions a split-second apart.

We initiated the Alliant position last March, and I wrote about it HERE. As for Amgen, it’s the fifth time we’ve purchase a piece of the company that was the portfolio’s very first position back in January 2018. My colleague Jason Fieber recently chose the drugmaker as his Undervalued Dividend Growth Stock of the Week; read his take HERE.

On Dec. 3, Amgen gave shareholders a nice 10.2% dividend raise, lifting its yield to 3.7%. Alliant, due to increase its dividend early next year, yields 2.8%.

Here is some updated valuation-related material on the two companies:

The table showing all 45 Income Builder Portfolio positions can be seen on our home page HERE.

We regularly present videos about all of our IBP buys. Check out the one about my second November selection, monthly dividend-payer Realty Income (O), HERE.

I also manage another real-money, public project for this site, the Growth & Income Portfolio; see the home page HERE. And a just-released video about Alphabet (GOOGL), can be viewed HERE.

Investors are strongly encouraged to thoroughly research companies before buying any stocks.