The newest member of the family soon will be joined by an even newer kid on the block, so this is as good a time as any to bring some new blood into my long-range stock portfolio.

My wife Roberta and I recently made a trip to see all the grandkids. We started out in Seattle, where we celebrated Owen’s first birthday. 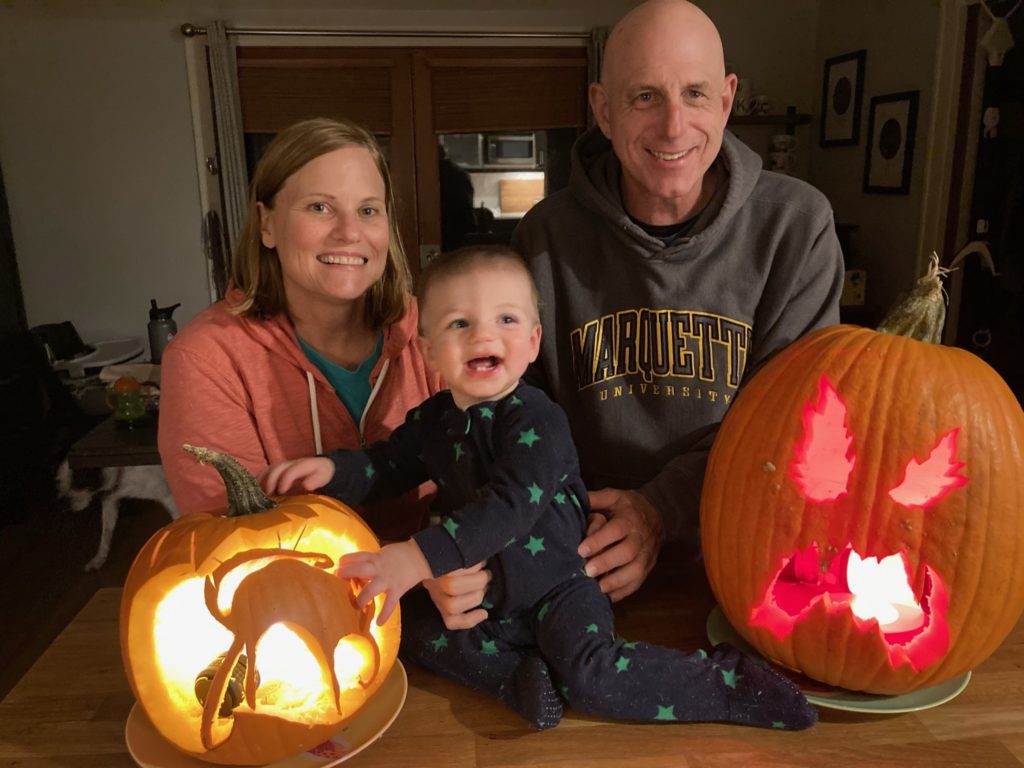 Then it was off to Chicago just in time for Halloween with our 2-year-old grand-twins, Jack and Logan. 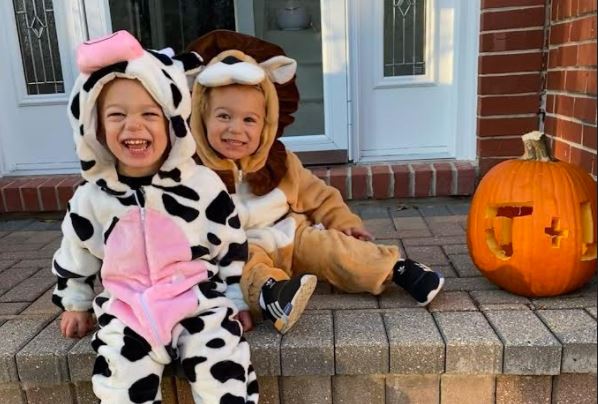 As if 11 days of hugs and giggles didn’t make us happy enough, we also received the exciting news that Owen’s mommy (our daughter Katie) is due to give birth to our first granddaughter in March.

Yep, it was time to rejoice … and to beef up the investments.

I launched my Growth & Income Portfolio (originally called the Grand-Twins College Fund) in June 2020. It has grown to include 17 stocks and one exchange-traded fund, and it was worth more than $4,300 at the end of October. 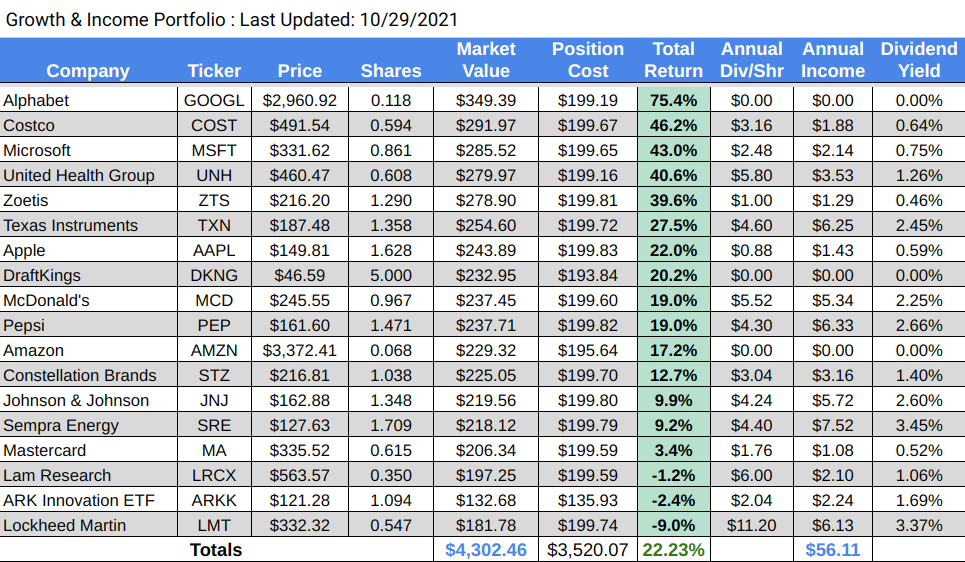 (The table above is constantly updated on the portfolio’s home page — HERE — where one also can find links to all of my GIP-related articles.)

I had been planning to start investing for Owen, anyway. The fact that he’s about to become a big brother means now’s the time to begin building a college fund for him and his little sister, one small buy at a time.

So on Oct. 29, before boarding the flight from Seattle to Chicago, I bought about $100 worth of Bank of Nova Scotia (BNS), one of Canada’s “Big Six” banks. 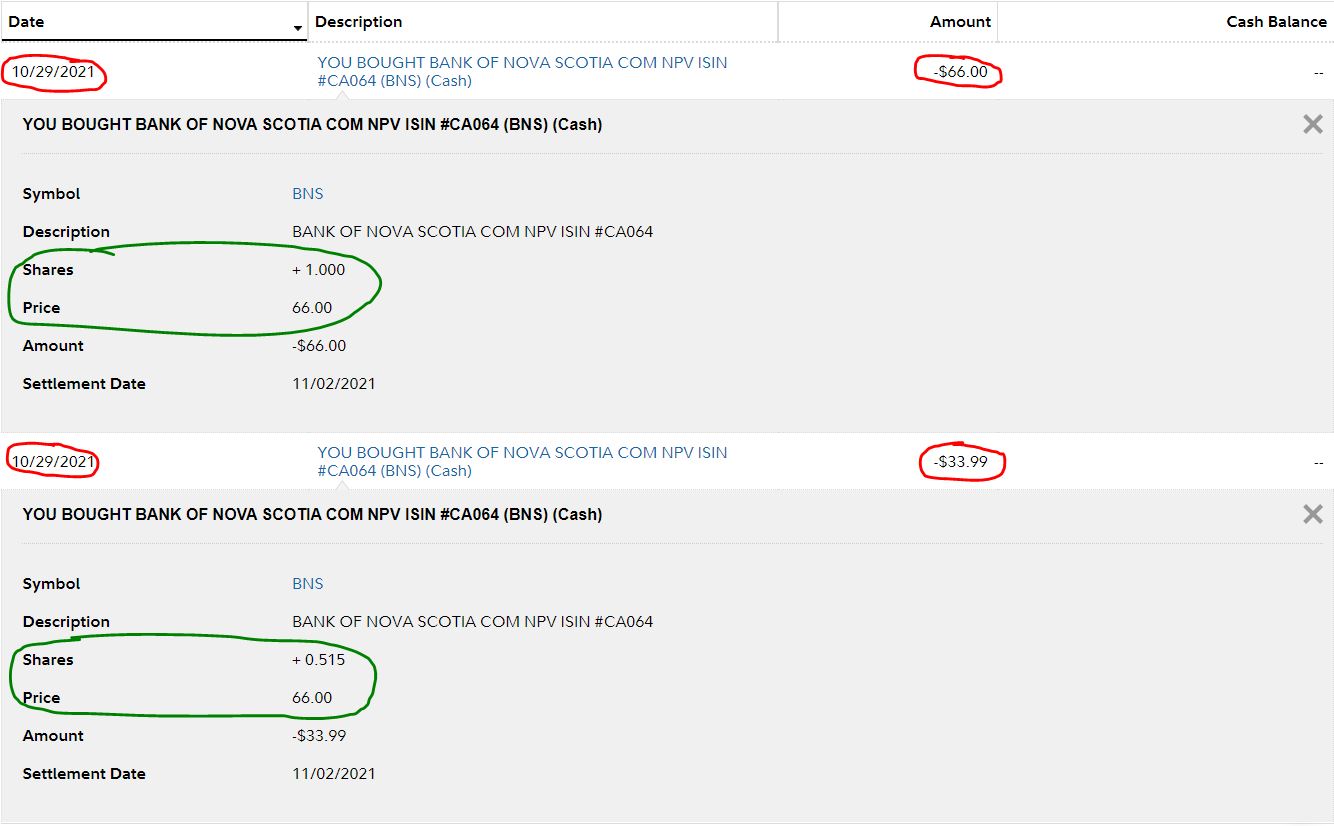 I made the purchase using Fidelity’s “Stocks by the Slice” feature. The order executed in two separate transactions a split-second apart, with a total of 1.515 shares being bought at $66/share.

Just because I’ve started to invest on behalf of Owen and his sister, it doesn’t mean I’m neglecting my $100 monthly commitment to Logan and Jack’s college fund. 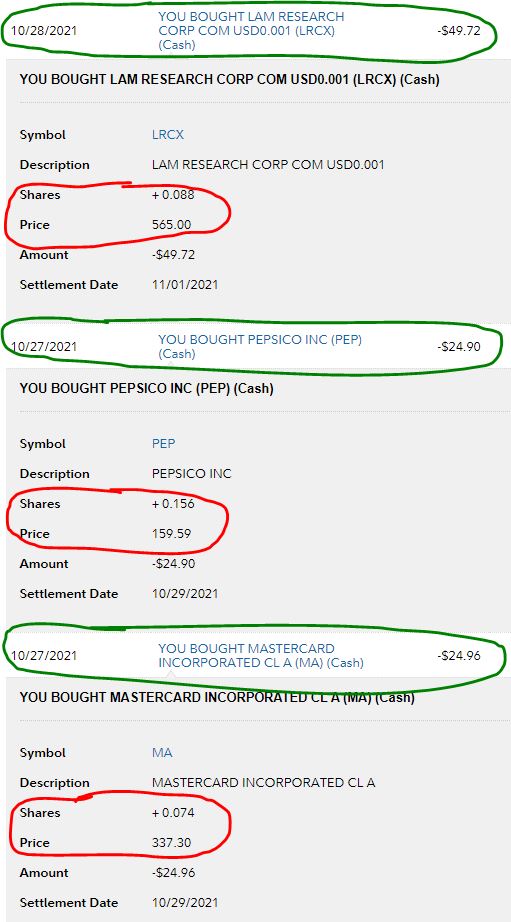 About half of the $100 went into LRCX, a company I first bought in September, and around $25 apiece went into the longer-standing PEP and MA positions.

I now have invested approximately $200 in each of the portfolio’s 17 individual stocks; roughly two-thirds as much has been put into the lone fund: the ARK Innovation ETF (ARKK).

Because I want to spend most of this article discussing my newest investment, Bank of Nova Scotia, I encourage those interested in Lam and other Growth & Income Portfolio holdings to check out my previous piece (HERE).

O Canada, You Have Some Real Great Banks

Back in March, I wrote about the investments held by Katie and her husband, Ben. (Read the article HERE.) They are off to an incredible start, with a portfolio that most folks of any age would envy.

Because it’s highly concentrated in tech stocks — with a significant amount invested in Ben’s former employer, Microsoft (MSFT) — I wanted to go an entirely different direction with the college fund I’ll be building for Owen and his sister over the next 17-20 years.

We batted around a few ideas during our Seattle visit, and we settled on Canadian banks, at least to start. 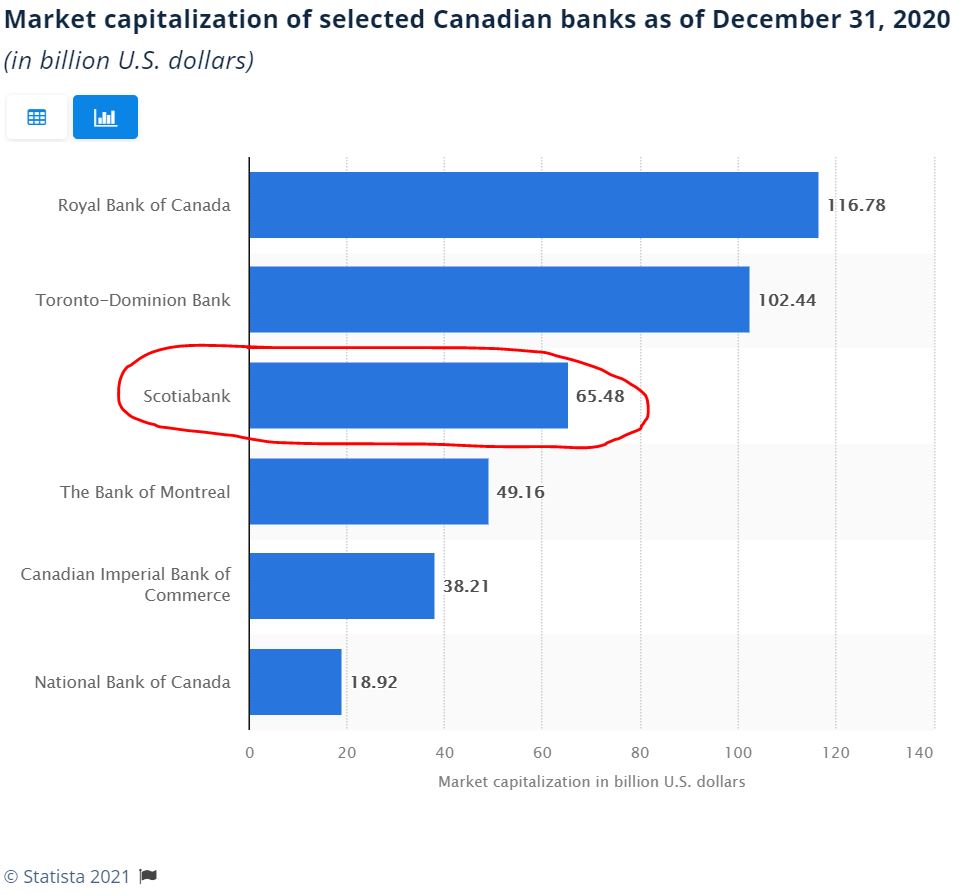 The Big Six, as they’re known in Canada, form something of an oligopoly — they hold about 90% of their country’s banking deposits. The Bank of Nova Scotia, often called “Scotiabank,” ranks third in both market cap and assets. 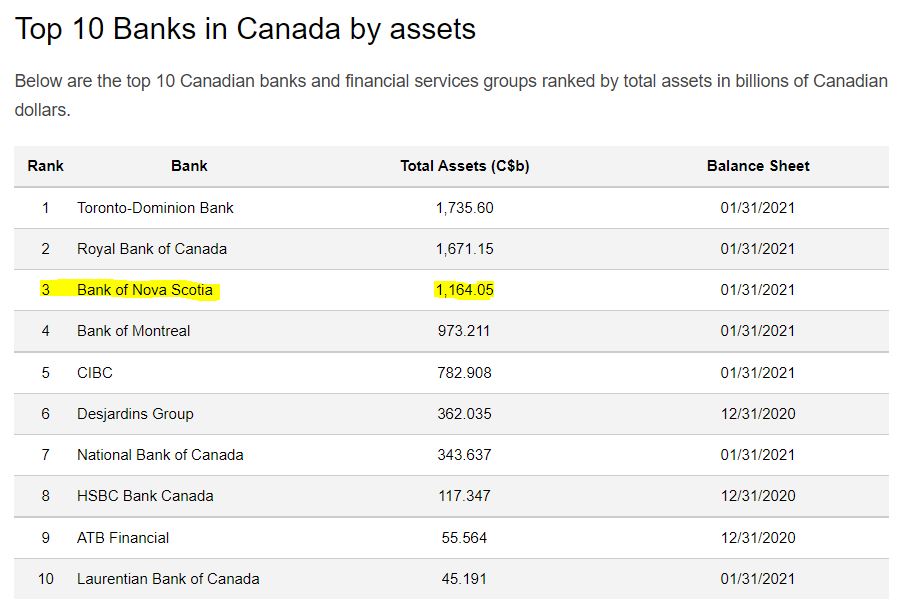 I thought it was interesting that although Ben is Canadian, he owns no stocks from his homeland (except a tiny bit in mutual funds), and he has very little non-U.S. exposure.

I also have long admired the consistency, strength and dividend commitment of the country’s banks; in fact, I initiated positions in several of them in my personal portfolio earlier this year.

Owen and his sister’s college fund probably will end up owning shares in most of Canada’s big banks, so the order in which they’re bought doesn’t really matter.

I decided to start with the one sporting the highest dividend yield — 4.3% — and the one with the greatest international focus. 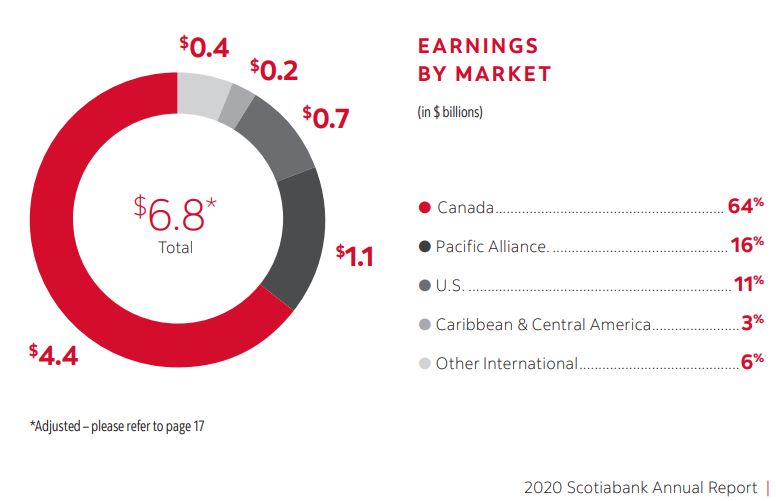 As Morningstar analyst Eric Compton said: “The international exposure gives the bank the potential for higher growth and return opportunities compared with peers, but it also exposes the bank to more risks.”

Given the long-term nature of this investment, I am comfortable assuming a little risk for a possible great reward.

Each of the Big Six has bounced back strongly from earnings declines that hit the industry during the depths of the COVID-19 pandemic, but Bank of Nova Scotia is expected to have the strongest growth in fiscal year 2022.

BNS also excels when it comes to quality scores: A+ credit rating from Standard & Poor’s; 1 in relative safety and A in financial strength from Value Line; “narrow” moat (2nd-highest rating) from Morningstar; 70 (“safe” dividend) from Simply Safe Dividends.

In our opinion, the company’s balance sheet is sound. … While the bank has not been perfect, it has generally avoided value-destroying products and expansions while pursuing sensible investments and growth opportunities. We assess the company’s capital return strategy as appropriate, and it is largely in line with peers, with a healthy focus on a dividend, and some additional earnings left over for repurchases, after internal investments.

Here’s something from the BNS website that any income-loving investor will appreciate: 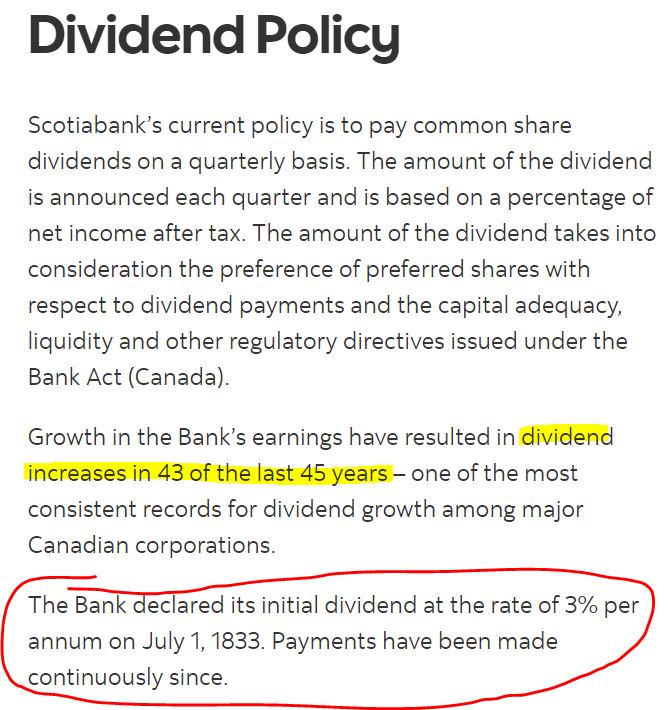 You read that right: BNS has paid dividends to shareholders, without interruption, for 188 consecutive years!

It’s important to remember that Scotiabank’s dividend is paid in Canadian dollars, so don’t be fooled by what might seem like dividend cuts.

The following FAST Graphs image of the New York Stock Exchange version of BNS (using U.S. dollars) makes it appear the dividend was reduced in 2009, and then again in 2015-16: 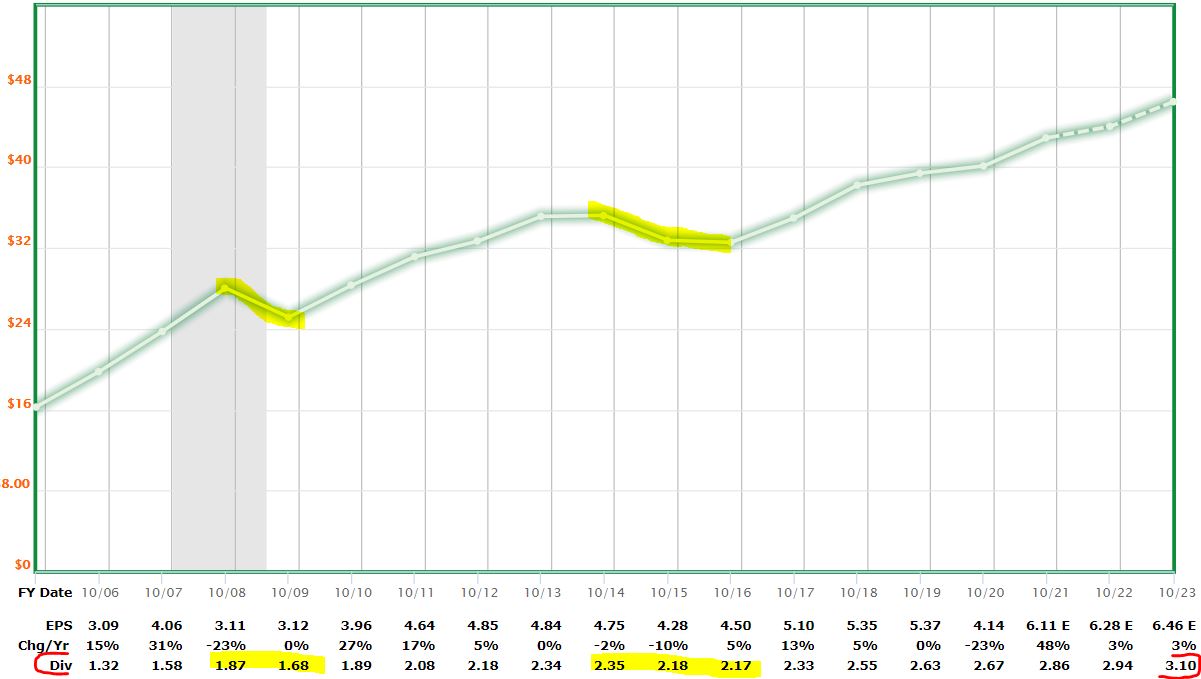 But when we look at BNS through the lens of the Toronto Stock Exchange (which uses CDN currency), we can see that the dividend actually was raised those years: 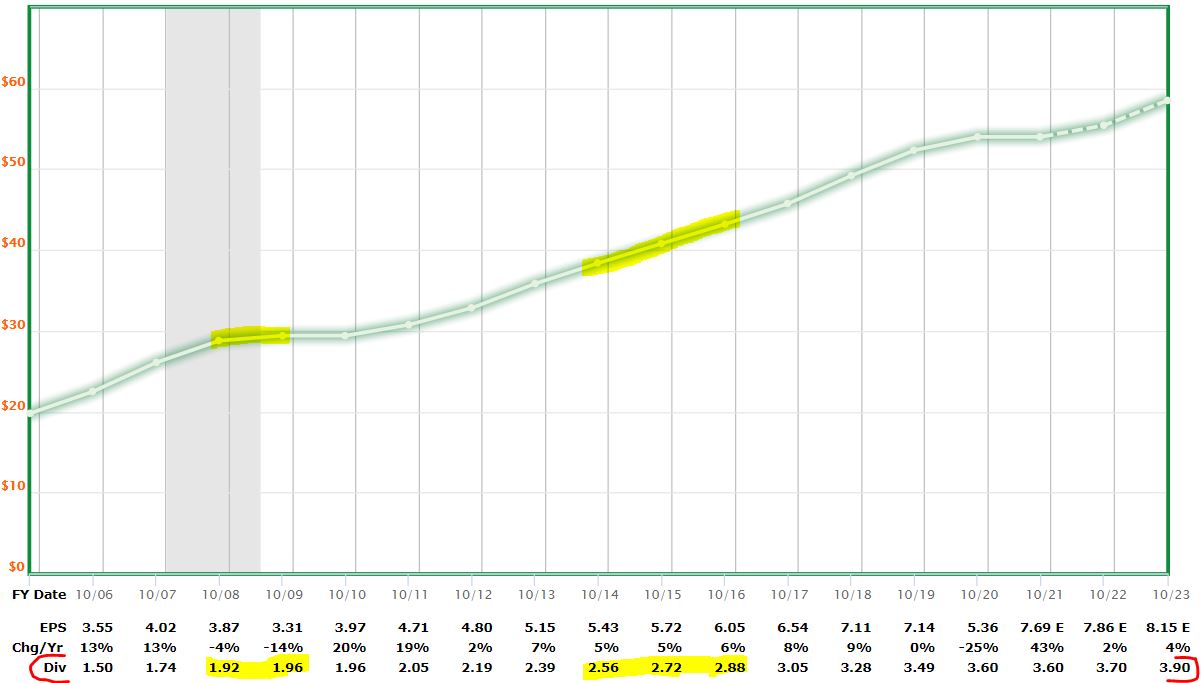 The discrepancy was caused by the ebb and flow of foreign-exchange rates.

Another important note: If you hold BNS (or any Canadian stock) in a taxable account, the dividend is subject to that country’s 15% withholding tax. (A U.S. resident can request a refund by filing paperwork at tax-reporting time.)

However — and it’s a big HOWEVER — if a United States resident holds a Canadian stock in a tax-advantaged account such as an IRA, Roth IRA or 401(k) plan, taxes are not withheld thanks to a “treaty” between the countries.

I bought BNS in my Roth IRA, so I won’t have to deal with those taxes (and the associated paperwork). I also bought the version of BNS sold on the NYSE rather than the Toronto exchange so I’m dealing only with U.S. dollars.

And here’s one more piece of good news …

Like the large American banks, Canadian institutions were not allowed to raise their dividends after the pandemic hit. A few months ago, regulators gave major U.S. banks the green light to increase dividends … and just days ago, Canada’s got the OK from their government to do likewise.

I actually had purchased all of my Canadian bank stocks before that news, but now such a move seems like even more of a slam-dunk! 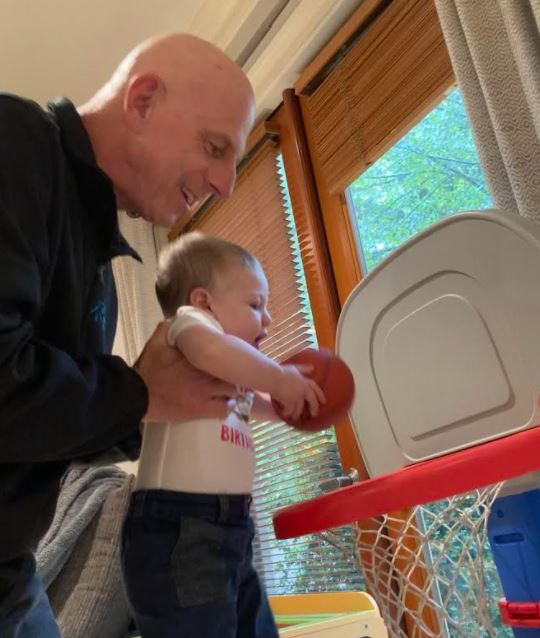 I’m looking forward to seeing what kind of raises Bank of Nova Scotia and the others declare. Announcements could come within weeks.

Although Scotiabank has underperformed the S&P 500 Index the last few years, it has been a long-term outperformer. 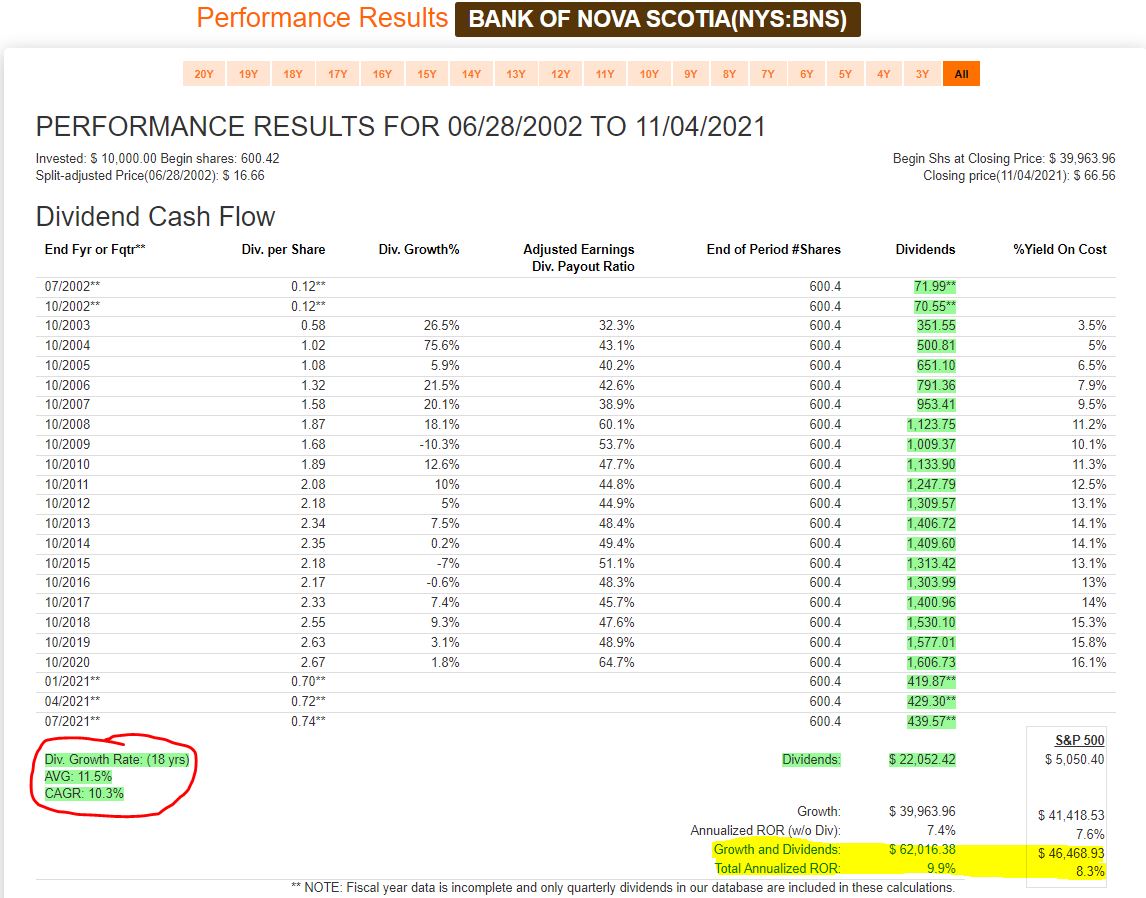 In the above FAST Graphs image, the yellow-highlighted area shows a pretty decisive advantage for BNS over the last couple of decades — and that’s thanks in great part to the company’s reliable, growing dividend (red-circled area).

When one is making regular, small investments as part of a very long-range plan, as I am for my grandkids, valuation isn’t all that important. But the mission here is not to convince others to replicate my buys.

This is about presenting investing candidates for further research and discussing portfolio-building techniques — even for people who might have a lot more money to invest or who might have significantly different goals and timeframes in mind. So I like to get into valuation a little for anybody who’s interested.

With that said, Bank of Nova Scotia is trading very close to Morningstar’s “fair value estimate.” 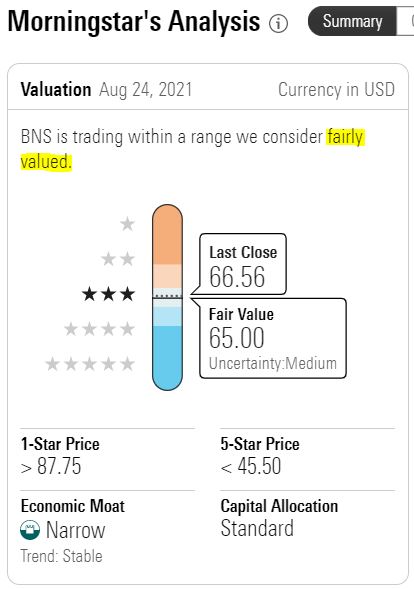 Turning to FAST Graphs, BNS looks fairly valued to a little undervalued; its 10.88 “blended price/earnings ratio” is slightly lower than its 11.35 norm of the last 10 years. 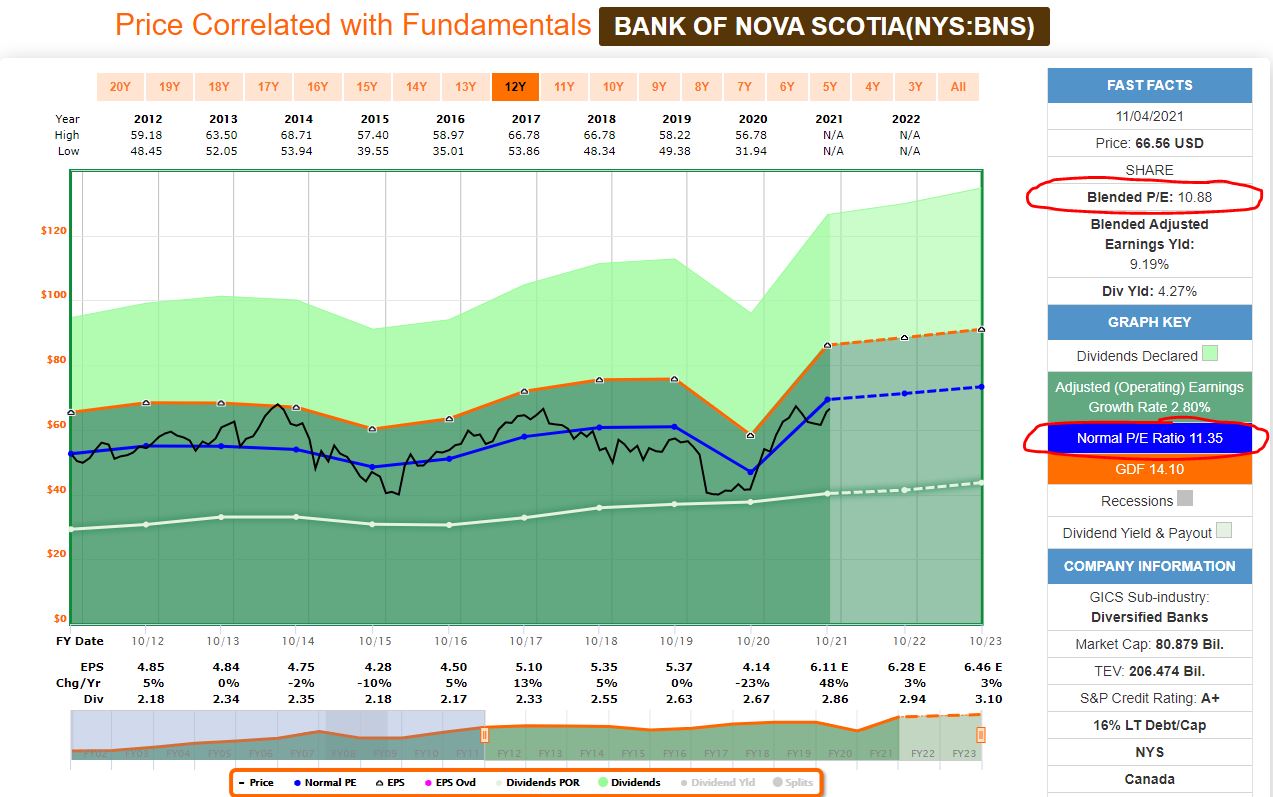 Scotiabank’s forward P/E ratio is even lower — 10.5 — which is one reason the analysts at Ford Equity Research believe the company will outperform the market over the next year or so.

Using the 10-year normal blended P/E ratio in the FAST Graphs forecasting calculator, the stock has a 9.64% estimated annual rate of return over the next two years. Not too shabby for a “boring” bank. 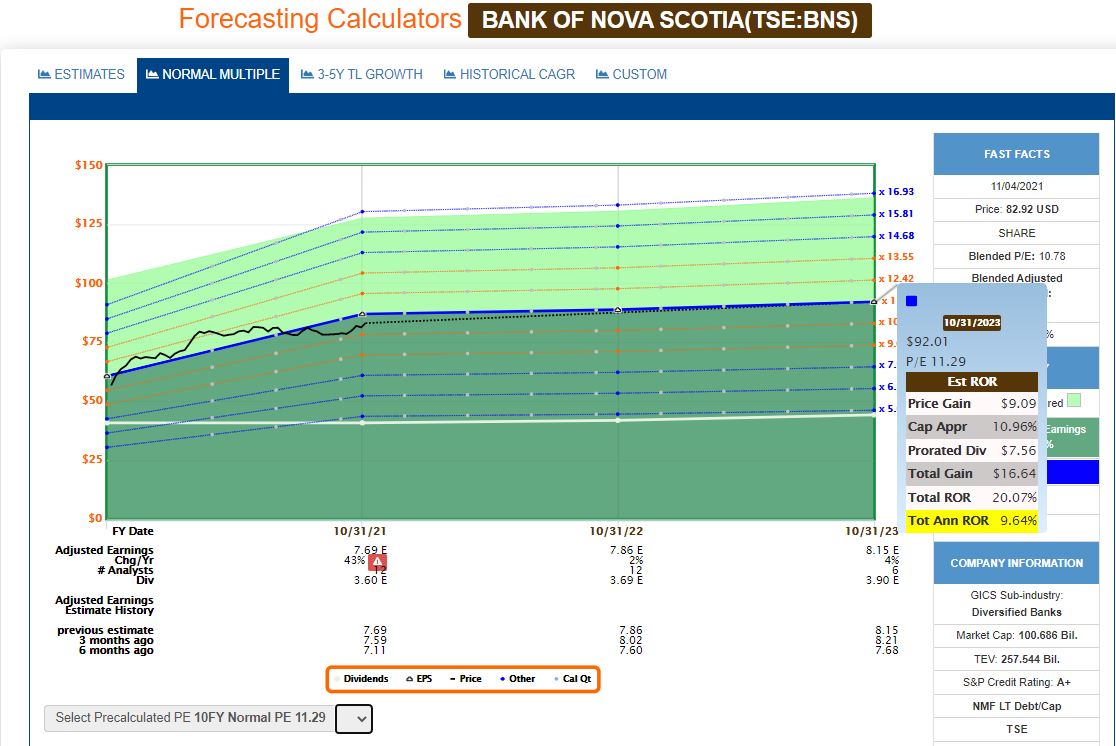 Bottom line: BNS is not a screaming buy, but it looks like a reasonable choice for investors interested in a solid stock yielding more than 4%.

And while we’re on the subject of valuation, a quick look at my three most recent purchases for the Growth & Income Portfolio — Lam Research, Mastercard and Pepsi:

LRCX looks especially attractive there, though it should be noted that the price I used in the above table was what I paid on Oct. 28. Lam’s price has since climbed to $610.77 at Friday’s close — an impressive 8% gain in the span of 8 days.

Of course, that would matter a lot more to me if I were going to sell … but I’m not. I’d have rather LRCX stayed at $565 so I could have bought some more at a steep discount.

For now, I’m not planning to list BNS and other Canadian banks alongside the holdings in the Growth & Income Portfolio. Different grandkids, different bookkeeping.

And I’m really not committing to buying only CDN banks for Owen and his imminent sister. After all, 20 years is a long time to invest in only a few stocks within the same sector, same industry and same country.

Things can change pretty quickly. I mean, 2 1/2 years ago, we had no grandchildren. Then we had two. Then we had three. Soon, we’ll have four, including our first little girl.

It’s hard to top a growing stock portfolio, but a growing family wins every time!

NOTE: Investors who really dig dividends should check out the other public, real-money project I manage for this site, the Income Builder Portfolio. The IBP home page can be seen HERE.