If you’re looking to get rich by Jan. 1 — or even by a few New Year’s Days from now — Dividend Growth Investing probably isn’t for you.

DGI is a get-rich-slow strategy, one that demands enough patience to let the income from dividends compound. It also requires high-quality companies, capable of taking whatever punches Mr. Market might throw.

For example, let’s take a look at BlackRock (BLK), UnitedHealth Group (UNH) and Starbucks (SBUX) — three stocks that most any investor using any strategy would have been happy to have owned for the last 20-plus years. 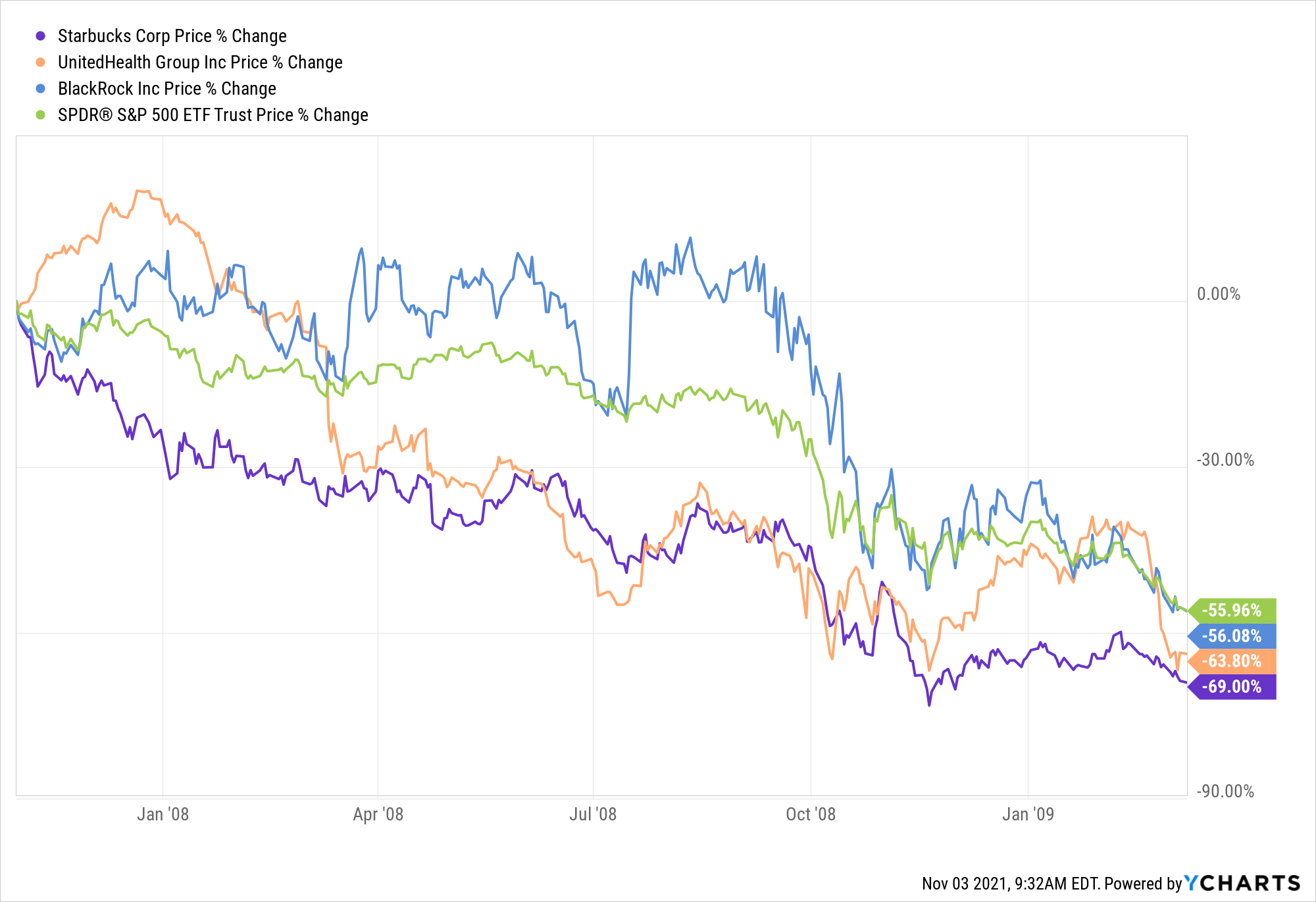 They were punched in the face repeatedly, bloodied so badly during the Great Recession that each actually fared worse than the overall market (as represented in the chart above by the SPDR S&P 500 Trust ETF).

But if an investor didn’t panic sell — if he or she had a long-term investing mindset — his or her frown would have turned upside down well before now.

Check out the performance of the same three stocks, as well as seven others found in many DGI portfolios, if one had invested $10,000 into each at the dawn of the Great Recession and had the patience to do nothing except reinvest dividends until today. 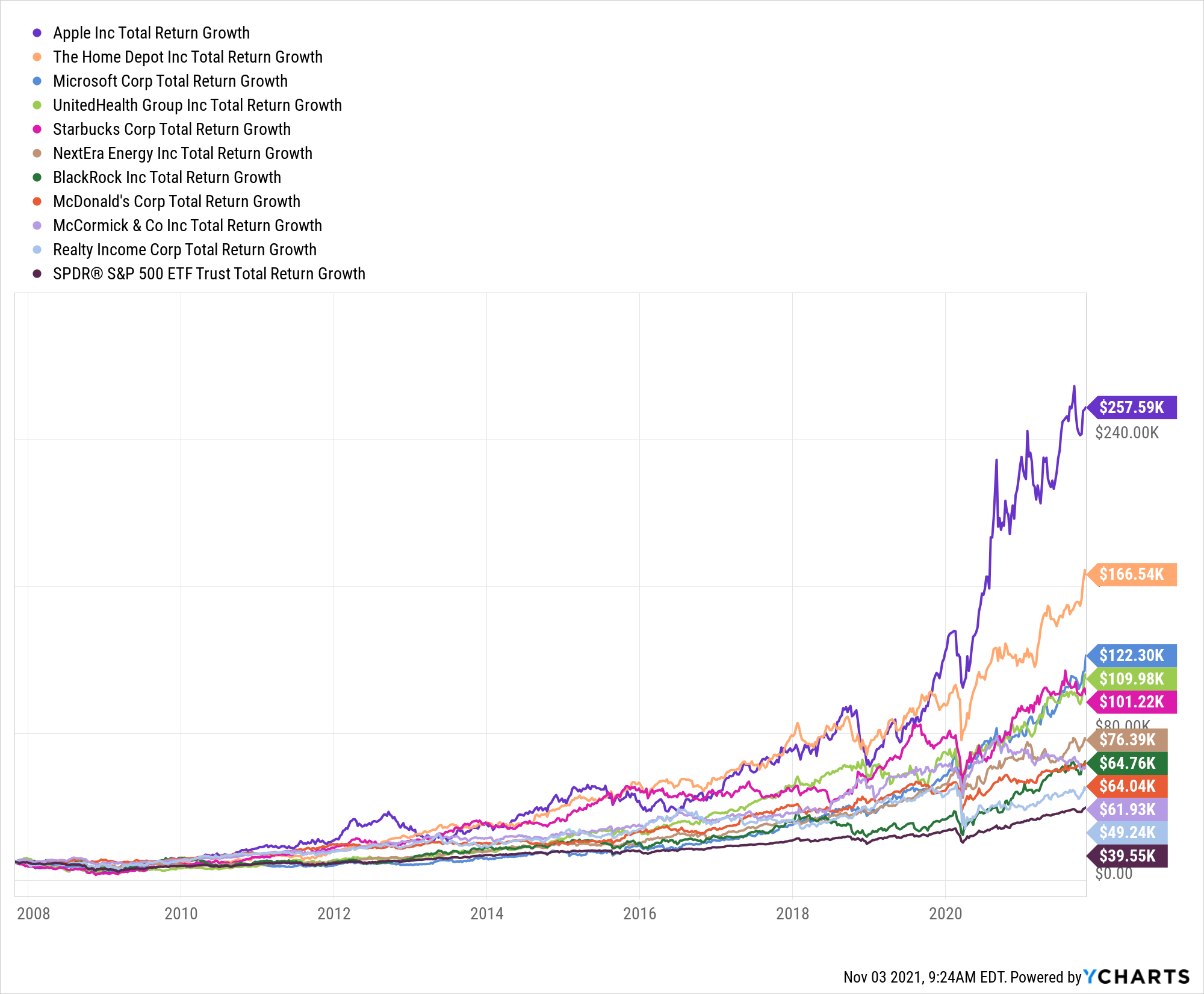 The $100K put into those 10 stocks would’ve turned into more than $1.07 million — despite the money originally having been invested on one of the worst days possible, and despite yet another recession triggered years later by the global COVID-19 pandemic. All 10 have crushed the S&P 500 Index, with several doubling or tripling it (or more).

In other words, a resolute DGI proponent would’ve gotten rich slowly, all while establishing a reliable, growing income stream to use for needs and wants later in life.

All that’s true, but I didn’t just pull those company names out of a hat.

Not only are they fairly typical holdings for fairly typical Dividend Growth investors, but all 10 companies are part of the Income Builder Portfolio — a real-money, real-time project that I’ve been running for nearly four years on behalf of this site’s co-founder, Greg Patrick.

Since January 2018, Greg has allocated $2,000 monthly. I’ve identified stocks I deem worthy of the portfolio and have executed purchases twice a month.

The goal, as stated in the IBP Business Plan, is to build a reliable, growing income stream by making regular investments in high-quality, dividend-paying companies … with a secondary goal of building a portfolio that will experience solid total return. 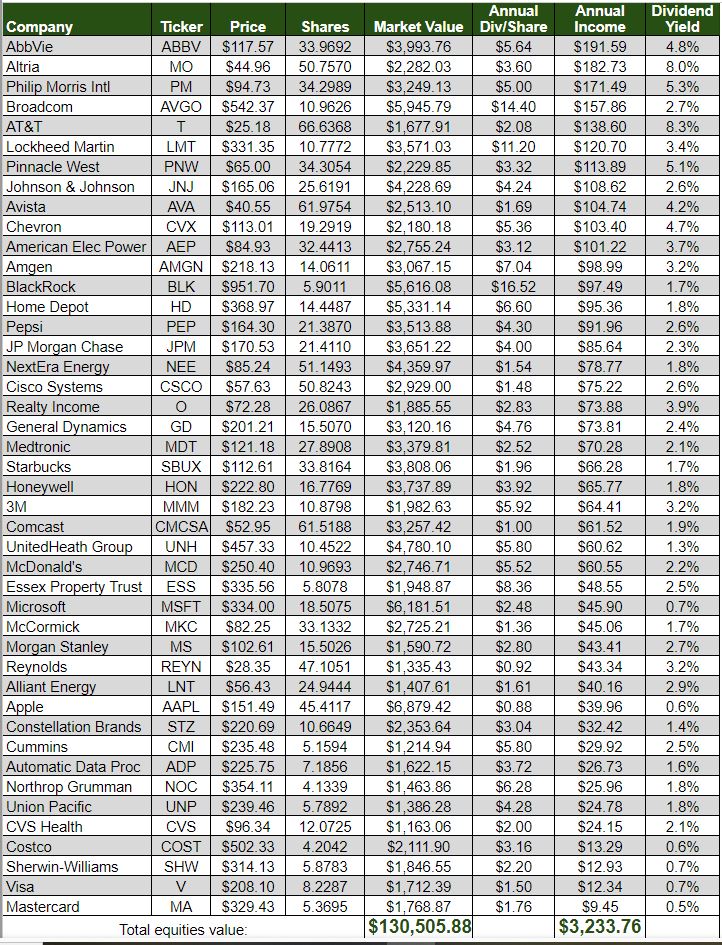 That table is updated regularly and it, along with links to every IBP-related article I’ve written, can be found on our home page HERE.

The portfolio also has an “Income Target”: $5,000 in projected annual income after seven years. We’re about 65% of the way there even though we’re only about 55% into that time frame, so we’re well ahead of the game.

Meanwhile, the portfolio’s overall income stream grew by an impressive 2.3% last month. That growth was achieved through a variety of ways, as illustrated by the three sections in the table below: 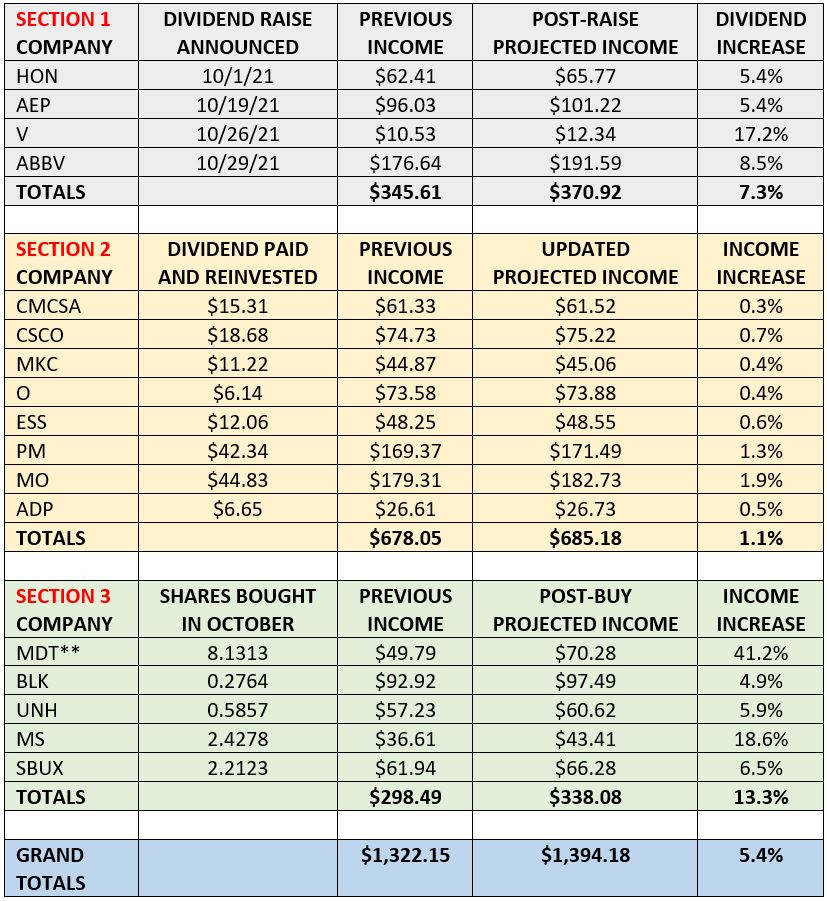 **For MDT, 8 shares of stock were bought with “new money,” and there was a reinvested dividend.

The end result of the October activity in those 17 positions is that the annual income stream grew by about $72, or 5.4%, which helped the overall portfolio’s stream burst through the $3,200 mark.

In SECTION 1, featuring the four companies that announced dividend raises, Visa (V) delivered the largest increase, 17.2%. But because it is one of the IBP’s smallest positions and one of our lowest yielders (0.7%), its actual contribution to the portfolio’s projected income stream was negligible — less than $2.

AbbVie (ABBV), on the other hand, will add about $15 to the income stream over the next year after its 8.5% hike, as it is one of our largest positions and one of our highest yielders (4.8%).

Honeywell (HON) and American Electric Power (AEP) each announced a very welcome 5.4% hike. They’ve been steady dividend growers over the years, with each exhibiting the kind of lovely staircase pattern that any DGI proponent can love. 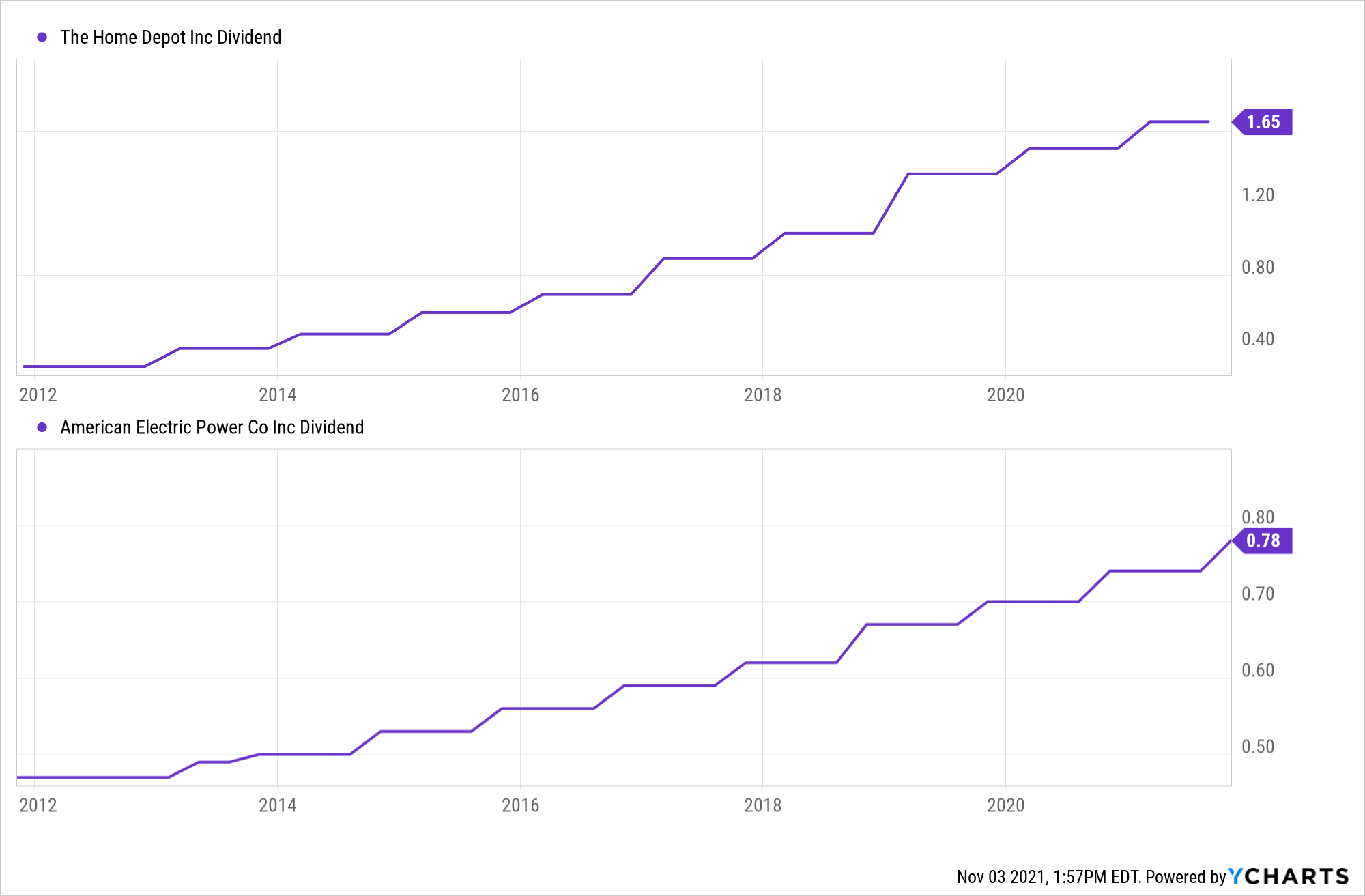 As shown in SECTION 2, last month’s dividend payouts and reinvestments won’t contribute much to the portfolio’s overall income growth — an increase of only about $7.

Altria (MO), one of only two IBP components yielding at least 8%, did see its projected annual income advance by nearly 2% after its $44.83 dividend resulted in almost a full share coming into the portfolio via reinvestment.

From SECTION 3, which reflects the purchases made in October, we get this interesting note: The projected income of Medtronic (MDT) was buoyed by both $1,000 in stock being bought on Oct. 11 and by the reinvestment of a dividend that was paid on Oct. 15.

The other four positions included in that section — Morgan Stanley (MS), BlackRock, UnitedHealth Group and Starbucks — increased in size on Oct. 18 after I divided about $1,000 of Greg’s money evenly between them.

Those companies have been total return standouts and great dividend growers. Heck, “great” is an understatement for Morgan Stanley, which over the summer actually delivered an incredible 100% increase.

That hike was one of the driving forces behind me selecting MS in July, and the portfolio has benefited nicely since — showing for the umpteenth time that total return and dividend growth are not mutually exclusive.

While the Income Builder Portfolio includes numerous companies that have beaten the S&P 500 since we’ve owned them, the fact is that many IBP holdings have not matched the index.

Dividend Growth Investing favorites such as Union Pacific (UNP), Lockheed Martin (LMT), Johnson & Johnson (JNJ) and Pepsi (PEP) are often unable to keep up during the kind of raging bull market that’s been going on for years now.

Over time, however, these “Steady Eddies” have done A-OK — much better than A-OK, really. 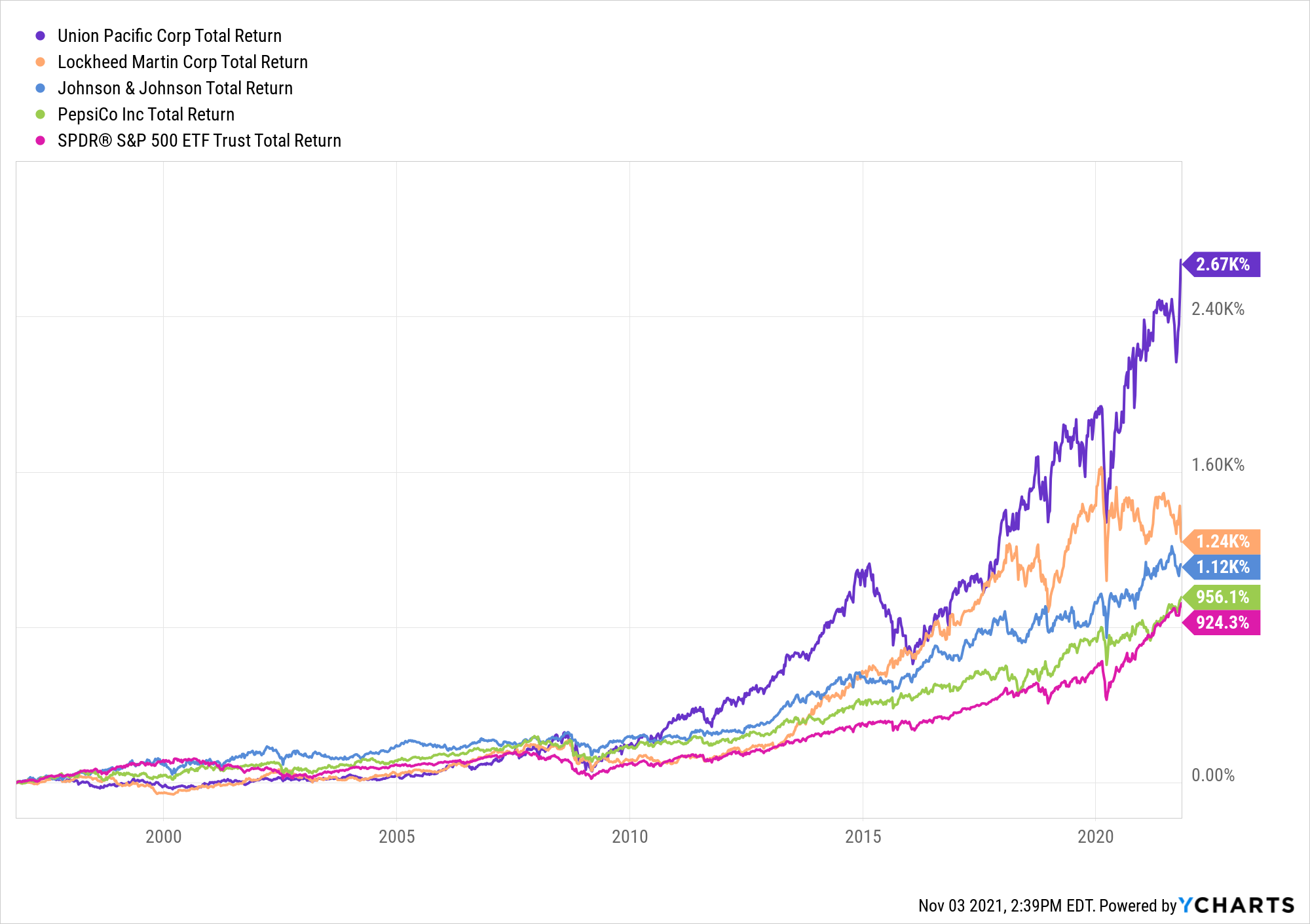 And even during bull runs, when “boring” companies like those aren’t beating the market, it’s comforting to know they are generating reliable, growing income for living expenses, travel, health care, family fun or whatever one needs or wants.

Hey, DGI isn’t for everybody. It takes patience and time, as well as high-quality companies in the portfolio.

The IBP is filled with the latter, and we’ve got plenty of time to let them do their thing.

NOTE: Remember, this project’s mission is to discuss portfolio-building concepts and to present interesting investing candidates for further research; it’s not to convince anybody to replicate the IBP’s contents. Investors should always conduct their own thorough due diligence before buying any stocks.