There are many ways to “play defense” in a stock portfolio.

Perhaps the most common method is to buy stocks in defensive sectors such as consumer staples, health care and utilities.

Even during economic downturns, most people keep buying toothpaste, filling prescriptions and paying their electric bills — which in turn helps keep earnings in those defensive companies from falling off a cliff.

Another way to play defense is to buy shares in individual businesses that tend to thrive during struggling times — for example, a company like McDonald’s (MCD), where families can go for cheap out-to-eat experiences during recessionary periods. 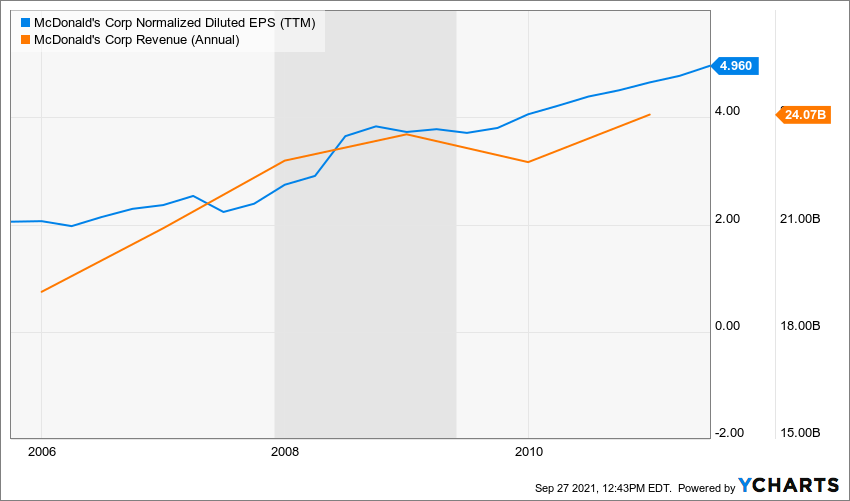 And there’s still one more thing many stock investors think of when the word “defense” is mentioned: businesses that manufacture products, systems and services to help defend the United States and its allies from those who would do them harm — companies such as Lockheed Martin (LMT).

Just last week, Lockheed Martin landed a $1.1 billion contract to deliver ten F-35 Lightning II fighter planes to the U.S. Air Force, and another half-dozen to the Marines. It was the second billion-dollar-plus deal the company inked in September.

No matter what shape the economy’s in, Lockheed has a market for its products; like McDonald’s, its earnings and revenues did just fine during the Great Recession. 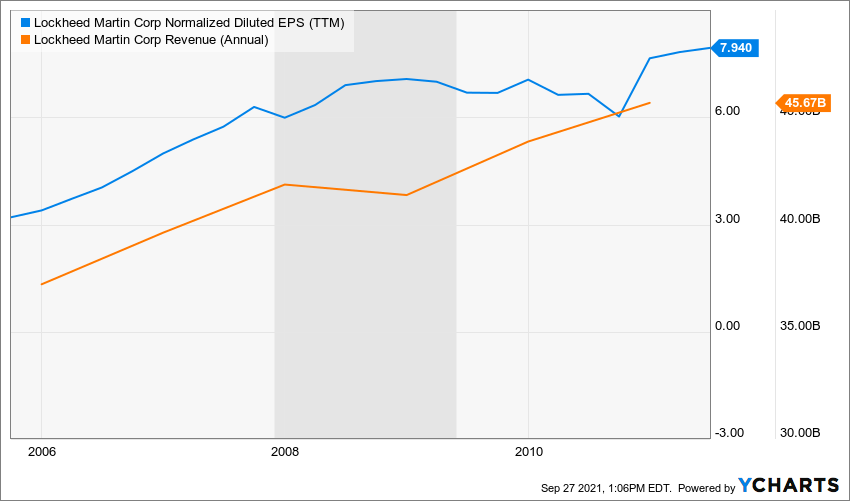 When making my most recent selections for the Income Builder Portfolio, I thought of these latter two “defensive” names.

And on Monday, Sept. 27, I executed purchase orders for additional shares of MCD and LMT stock on behalf of this site, dividing the $1,000 semi-monthly allotment relatively evenly between the companies.

It was the fourth time the IBP bought Lockheed Martin; indeed, we have invested more in that company than in any other. It was our third McDonald’s purchase.

In my previous article, I discussed the businesses in detail — including the fact that both just announced inflation-beating dividend raises in the 7% to 8% range.

McDonald’s has been growing its annual dividend for decades, and Lockheed is in its 18th straight year of raising its payout.

With this buy, we added about $27 to the IBP’s projected annual income stream.

The LMT and MCD positions now are expected to generate more than $180 in combined dividends over the next year, representing about 6% of the portfolio total.

The following FAST Graphs illustration shows that McDonald’s produced some $14,000 in dividends — $10K more than the S&P 500 Index — and that helped MCD more than double the overall market’s total return.

The story was similar (albeit not quite as pronounced) for Lockheed Martin, which produced about three times as many dividends as the index and 67% better total return. 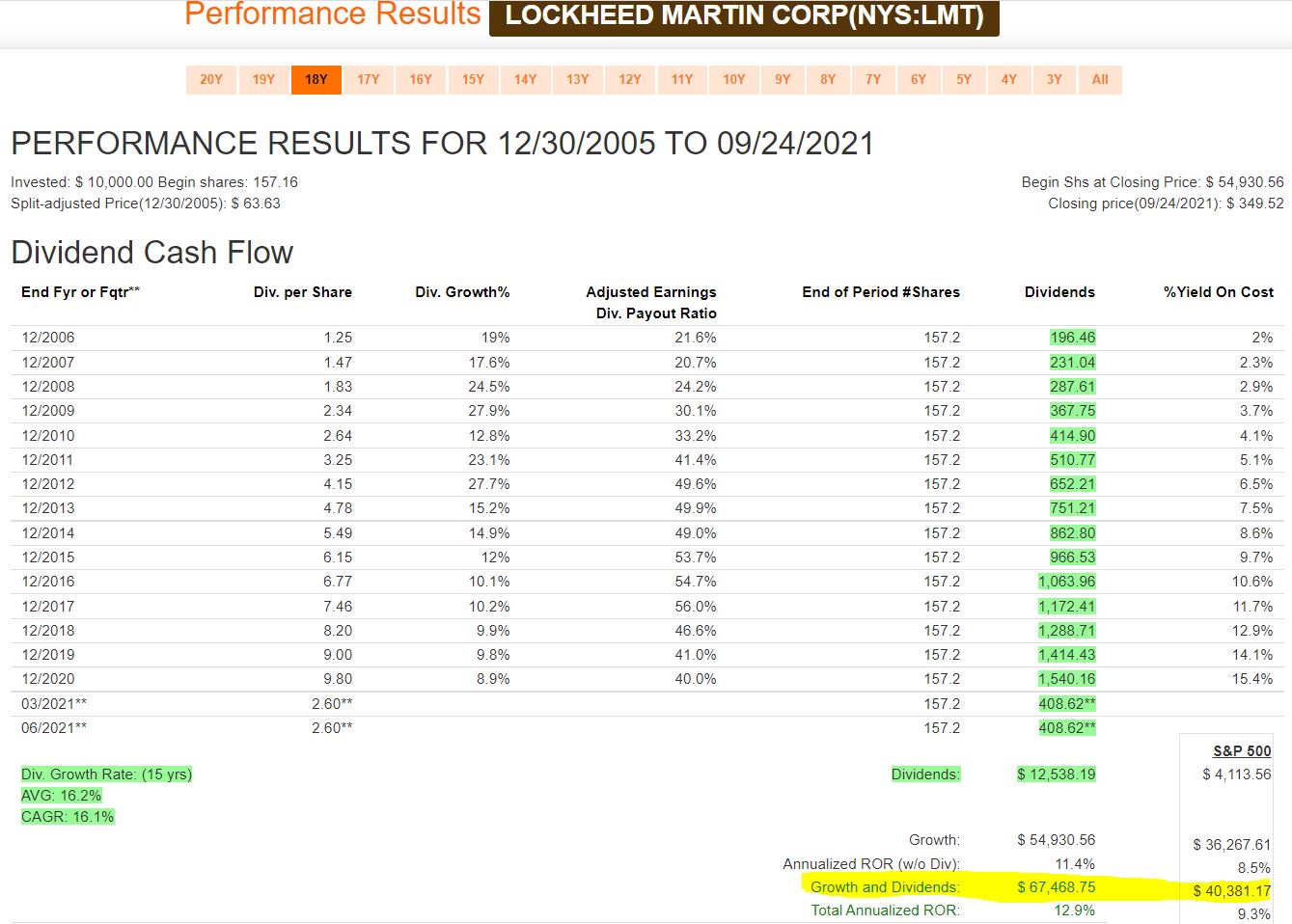 Those two FAST Graphs underscore that LMT and MCD have been “all-weather” stocks that, over the long term, have performed well through good times and bad.

As we do with all 44 of the Income Builder Portfolio’s positions (see them all HERE), we will continue to reinvest the dividends paid by Lockheed Martin and McDonald’s. That way, we’re regularly buying fractions of shares of every company we own, and always growing our income stream.

Jefferson Research uses its “Financial Sonar” to rate the quality of each business it evaluates. McDonald’s gets some of its highest marks … but there is a red flag regarding the stock’s valuation. 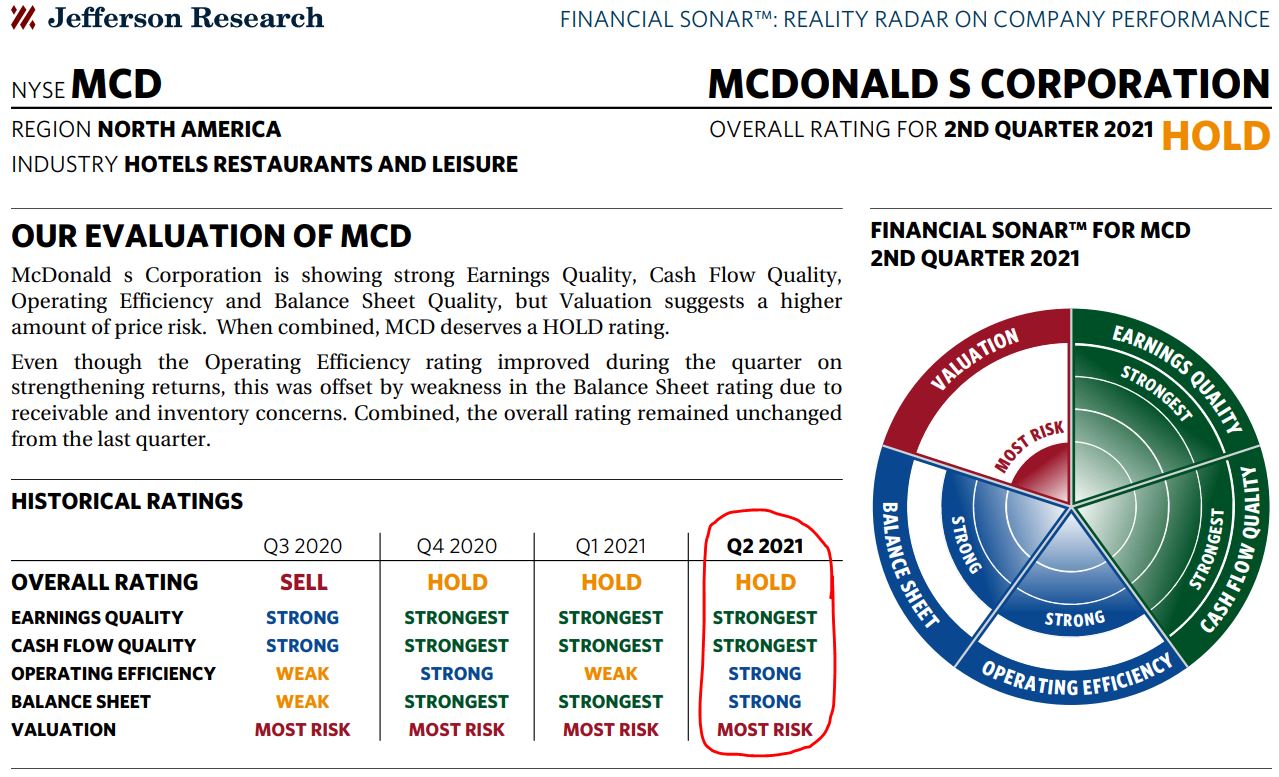 MCD is trading in the neighborhood of its all-time high, and its forward price/earnings ratio has zoomed past 25 — quite high for an operation that doesn’t routinely offer the kind of earnings growth that go-go tech companies do.

Nevertheless, analysts are very bullish on McDonald’s, with the following graphic showing that 30 of the 40 surveyed give either “strong buy” or “buy” ratings:

Refinitiv report on MCD, via fidelity.com

Additionally, 21 of the 24 analysts who are part of TipRanks’ survey give MCD a “buy” rating.

Lockheed Martin, trading at a forward P/E ratio under 13, is generally regarded as being undervalued.

Like McDonald’s, LMT also gets a consensus “buy” rating.

Refinitiv report on LMT, via fidelity.com

Here’s a look at what Morningstar says is the fair value of each stock, as well as the price targets of several analysts:

Looking at those valuations and price targets, value-conscious investors might find LMT more attractive than MCD right now … but both have their pros and cons.

Value Line’s analysts say Lockheed Martin has about 21% upside over the next 18 months, and they put LMT in their model portfolio of Stocks with Above-Average Year-Ahead Price Appreciation.

Recent weakness offers buying opportunity. … Valuations are attractive; the current P/E ratio is at the low end of the historical range. … The company has consistently delivered positive surprises to the Street in recent years, regardless of whether defense spending is rising or falling, or the White House is occupied by a Republican or a Democrat. Lately, government spending on certain segments of Defense has picked up — a trend we think is likely to continue. We also have a favorable view of the company’s focus on international revenue diversification (now more than 25% of sales), and expect ongoing geopolitical tension to benefit sales and earnings going forward. … We look for the stock price to recover as the company extends its positive earnings surprise streak in 2022. … We continue to view the shares as a suitable core holding in a diversified portfolio.

In a way, that supports what I said earlier about this defense-industry stock being “defensive” in its own way.

Lockheed Martin is in the industrial sector, which includes companies whose earnings tend to go up and down through various economic cycles.

Defense contractors in general, and Lockheed Martin in particular, bucked that trend during the Great Recession. Here are the seven industrial-sector stocks in the Income Builder Portfolio, and their earnings growth (or lack thereof) in fiscal year 2009:

It’s important to remember that earnings growth is no guarantee of share price appreciation; indeed, LMT’s stock price fell 10% in 2009, and its drawdown through the entirety of the recession was 46%. The latter figure was less than the overall market’s 56%, but it still wasn’t fun for investors.

As for McDonald’s, Argus recently raised its 12-month price target from $260 to $275, suggesting an 11% upside, with analyst John Staszak saying:

Our long-term earnings growth rate forecast is 10%. … We expect McDonald’s, with its strong digital, delivery and drive-thru businesses, to endure a period of weak industry sales better than most other restaurant chains. During the current period of industry weakness, we prefer large restaurant chains like McDonald’s that offer value menus, spend heavily on advertising, and have clean balance sheets.

Value Line’s analysts say MCD has about 15% upside over the next year and a half, and they’ve placed it in their model portfolio of Stocks with Above-Average Dividend Yields.

By definition, neither Lockheed Martin nor McDonald’s is a “defensive” company. Both, however, have defensive characteristics that helped them grow earnings during the Great Recession.

As a stock, LMT performed much better than most industrials during that economic crisis. And MCD not only outperformed most others in the consumer discretionary sector, it famously suffered only a 3% drawdown.

Hey, even when folks are barely scraping by, some will find a little money for a Big Mac or fries or a McFlurry. 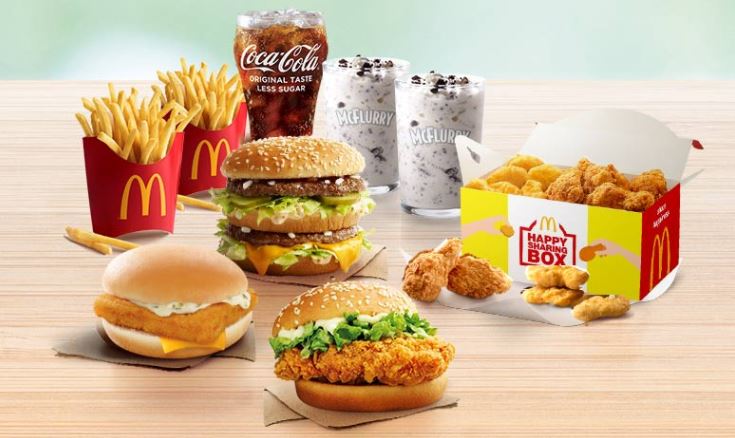 Regardless of how McDonald’s and Lockheed Martin are labeled, I’m happy to add more shares of these high-quality companies to the Income Builder Portfolio.

Note: The other real-money project I manage for this site, the Growth & Income Portfolio, also includes LMT and MCD. In addition, as the name implies, it has “growthier” holdings such as Alphabet (GOOGL), Amazon (AMZN) and Texas Instruments (TXN). Check out the GIP home page HERE.