We invested in a stock that turned out to be a laggard, we lost a few bucks, and now it’s time to move on.

Some 19 months ago, I selected IBM (IBM) for the Income Builder Portfolio as a turnaround play … but the turnaround still hasn’t happened, and I decided we had waited long enough.

Given that the original buy cost $942, total return on the position was minus-6.2%.

Nobody likes to admit “defeat” by selling at a loss, but thankfully this wasn’t a cataclysmic loss.

I thought I could make better use of those funds, and I executed purchase orders on this site’s behalf to increase the size of four existing positions.

I’ll get back to those four companies in a minute, and I also will discuss how these transactions affect the IBP’s expected income production.

First, let’s talk about why I dumped the company known as “Big Blue.”

Back in February 2020, I decided to add IBM shortly after the company announced that Arvind Krishna would replace Ginni Rometty as CEO.

I had seen what a change in leadership had done six years earlier for Microsoft (MSFT) — the top performer in both the IBP and my personal portfolio — and I liked what I had heard about Krishna.

Analysts also were enthusiastic about Krishna taking over, and IBM’s price was bid up to a multi-year high on the news.

Whatever momentum might have built was quickly quashed, however, as the market crashed about two weeks later due to COVID-19 fears.

Once the coronavirus crash ended, most major internet companies recovered their losses quite quickly and went on to establish new all-time highs. But not IBM, which never sniffed its pre-pandemic price.

Given its long history of underperformance — as illustrated by its 10-year chart below — I guess nobody should’ve been surprised. 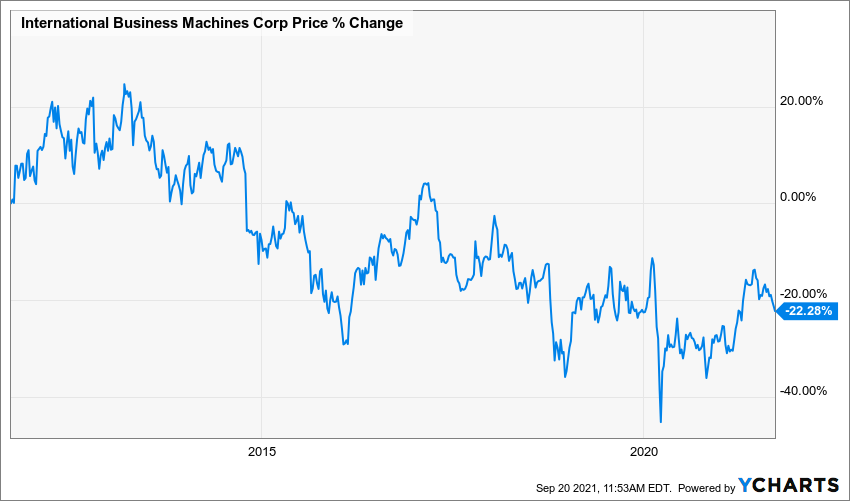 The significant growth in earnings and sales that many had hoped to see has continued to elude IBM.

Yes, finally in the second quarter of 2021, there were slight year-over-year improvements — but those were “easy comps” because they were based on the anemic showings from the pandemic’s depths.

Earnings and revenues sat below their levels of years earlier, and I’m still not sure I see considerable improvement ahead.

I might have given IBM a little more time, but a deadline of sorts was approaching.

Before the end of the year, the company is expected to spin off its managed infrastructure services into a separate company to be called Kyndryl.

I had no interest in the IBP owning Kyndryl, and I’m not sure getting rid of that operation will make IBM a better long-term investment.

Focusing on cloud operations always sounds great, but IBM is so far behind its rivals — especially Amazon (AMZN) Web Services and Microsoft (MSFT) Azure — that it’s barely a bit player. 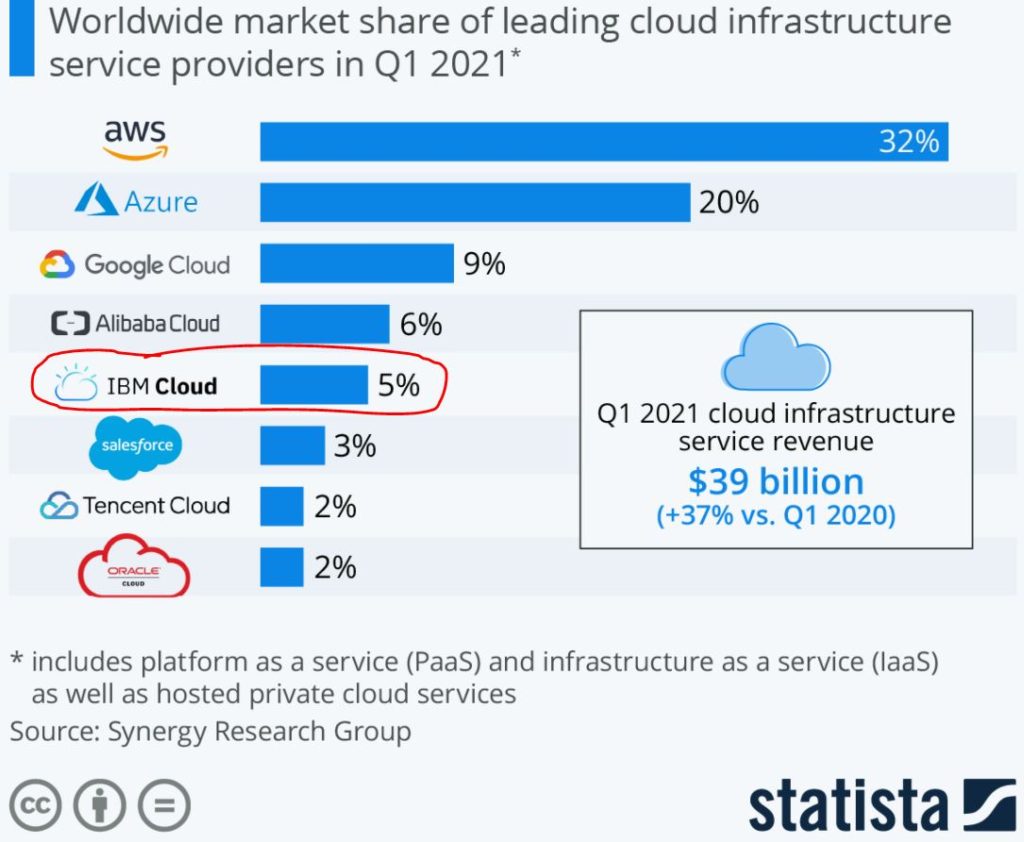 Here is what Morningstar analyst Julie Bhusal Sharma has to say about the company:

While IBM has tried to refresh its diverse offerings, we think IBM’s moat is deteriorating as the cloud transition chips away at IBM’s competitive advantage associated with customer switching costs.

We think that originally, IBM customers selected IBM for their IT services provider due to appeal in specialized functions, whether it be mainframes, databases or integration software. Before the cloud, these functions needed to successfully interoperate with other IT workloads, which tended to be on a proprietary stack. We think this led IBM’s customer base to further entrench their enterprise with IBM offerings due to the ease of a main IT services provider and the surety of IT functions having interoperability.

However, now with the rise of the cloud and open source software, the possibility of a mix and match IT infrastructure is real. While we think this is not a risk for many loyal IBM enterprise customers (especially those using IBM’s mainframes), we do think the trend will continue to hurt all other sides of IBM’s business. We think clients will gradually reduce their IBM offerings, from Infrastructure as a Service to software to outsourcing functions (like payroll processing and talent management) as competitors’ value add lowers the cost of switching from IBM products.

That helps explain why we’re moving on from IBM.

Three of the four purchases were companies we had added to the Income Builder Portfolio in the last two months. Rather than repeat my investment thesis on each, I invite those interested to read the articles I wrote at the time: Union Pacific (HERE); Cummins (HERE); Morgan Stanley (HERE).

Realty Income, on the other hand, does have some recent news: It is about to close on its merger with Vereit (VER), making a strong company even stronger.

Cummins, Morgan Stanley, Realty Income and Union Pacific have a lot going for them, which is why I chose them for the the IBP in the first place.

Here’s how they are rated in various quality categories:

IBM did OK in many of those categories, too, though Morningstar gave the company its lowest rating for Capital Allocation — Poor — and Simply Safe Dividends gave IBM only a 65 for safety.

While both Realty Income and Morgan Stanley appreciated pretty nicely between our purchases of them, we got Cummins and Union Pacific at much lower prices than we paid a little earlier in the summer.

Because those declines were all about overall market action and not about the fundamentals of the companies, it’s a good thing: I liked Union Pacific at $209, but I love UNP at $202; I liked Cummins at $239, but I love CMI at $222.

Here’s a look at some valuation-related information and analyst price targets for each company:

*For REITs, price/adjusted funds from operations is a more relevant valuation metric than P/E ratio.

By way of comparison, Morningstar’s fair value price on IBM is $125 — meaning the analysts there felt the company is overvalued. And only 3 of the 9 analysts surveyed by TipRanks call IBM a buy.

As its name suggests, the Income Builder Portfolio strives to construct a reliable, growing income stream over time.

To that end, here’s what these latest purchases will bring to the IBP:

At nearly 5%, IBM was one of the IBP’s highest yielders, and the position was expected to produce $42.98 in income over the next year.

Despite IBM’s high yield, it had been no help to the portfolio’s dividend growth, as it barely raised its payout the last few years.

Realty Income’s dividend growth also has slowed, but it calls itself “The Monthly Dividend Company” for a reason — folks there will do everything possible to maintain the distribution.

Cummins raised its dividend by 7.4% this year; Union Pacific increased its payout by 10.3%; and Morgan Stanley delivered an amazing 100% hike to shareholders.

Here’s some dividend-related information about the four companies:

With these moves, the IBP now has 44 companies — see the entire portfolio HERE.

Even after the IBM sale, Information Technology makes up 21% of the portfolio, as it continues to be our most heavily weighted sector.

Though I am a reluctant seller who has made only a few sells since we launched the IBP in 2018, I felt I had given IBM plenty of time to prove itself.

I’m confident that I’ve reallocated the money to companies that will help us reach our income goals, all while improving the Income Builder Portfolio’s overall strength and total return.

I will reveal my next selection in an article scheduled to be published Saturday, Sept. 25.

As always, investors are strongly encouraged to conduct their own thorough due diligence before buying or selling any stocks.