If there were an exact science in determining fair value for every stock, it sure would make investing easier.

Unfortunately, the science is quite inexact. Even experts who have been assigning valuations for decades often disagree significantly about a given equity — and history proves many of them to have been “wrong.”

So what’s an investor to do?

Well, I look at a company’s current financial picture, and I also check out estimates of future earnings and other forward-looking data. I see what analysts have to say, even as I recognize that they face the same limitations the rest of us do.

All of the above illustrates why I favor the quality of a company even above valuation when deciding if I want to select it for the Income Builder Portfolio.

Here is the Jefferson Research “Financial Sonar” of the world’s largest railroad: 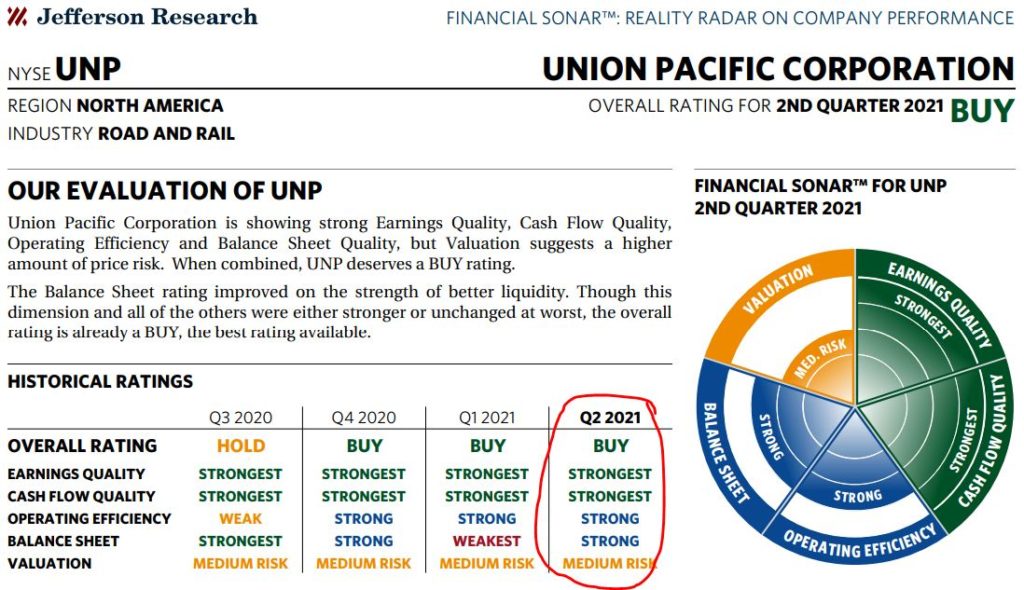 That’s one fundamentally sound company, with a great balance sheet, and with strong earnings and cash flow.

Union Pacific’s one “wart”? Depending upon what data one uses and how one analyzes it, the stock might be overvalued, hence Jefferson Research’s “medium risk” designation in that category.

As I’ll show in a minute, though, many analysts believe UNP is fairly valued or even undervalued. Regardless, I appreciate the quality of the business so much — as discussed in my previous article — that I wanted it in the Income Builder Portfolio.

And on Monday, Sept. 13, I executed a purchase order for $1,000 worth of UNP on behalf of this site’s co-founder (and IBP money-man) Greg Patrick.

It’s also the 7th company we own in the Industrial sector, which makes up about 12% of the portfolio. Only Information Technology (21%), Health Care (15%) and Consumer Staples (14%) are more heavily weighted within the IBP.

Is UNP overvalued, undervalued or fairly valued? First, let’s take a look at a couple of consensus views of analysts.

Of the 17 used by TipRanks, 13 consider Union Pacific to be a “buy,” and their average 12-month target price represents a nearly 20% upside.

The story is fairly similar among the 28 analysts in the Reuters survey, with 19 giving either a “buy” or “overweight” call.

Interestingly, VL says the first portfolio is for more conservative investors while the second is for more aggressive investors. I guess the folks there believe UNP is for everybody!

Value Line’s analysts believe the stock could appreciate more than 50% over the next 3-5 years (green-circled area) and about 25% over the next 18 months (yellow highlight). VL’s relative safety and financial strength ratings reflect the company’s quality, as do UNP’s rankings compared to its peers (red circle). 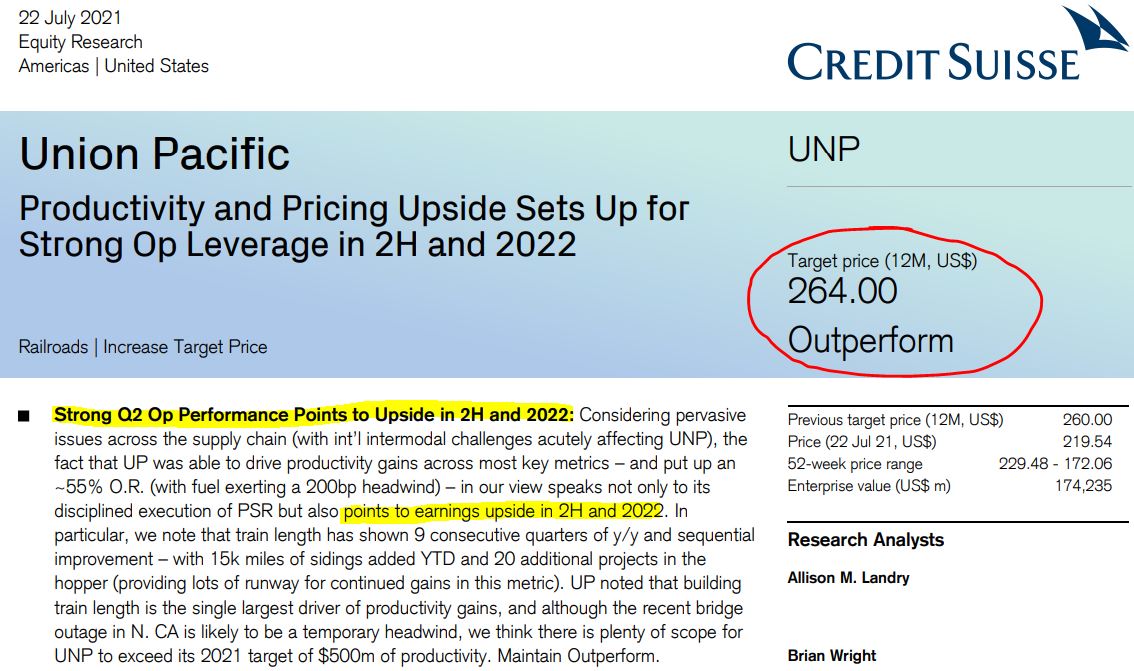 Morningstar, on the other hand, believes Union Pacific is already trading at a premium — even though analyst Matthew Young generally sings the company’s praises. 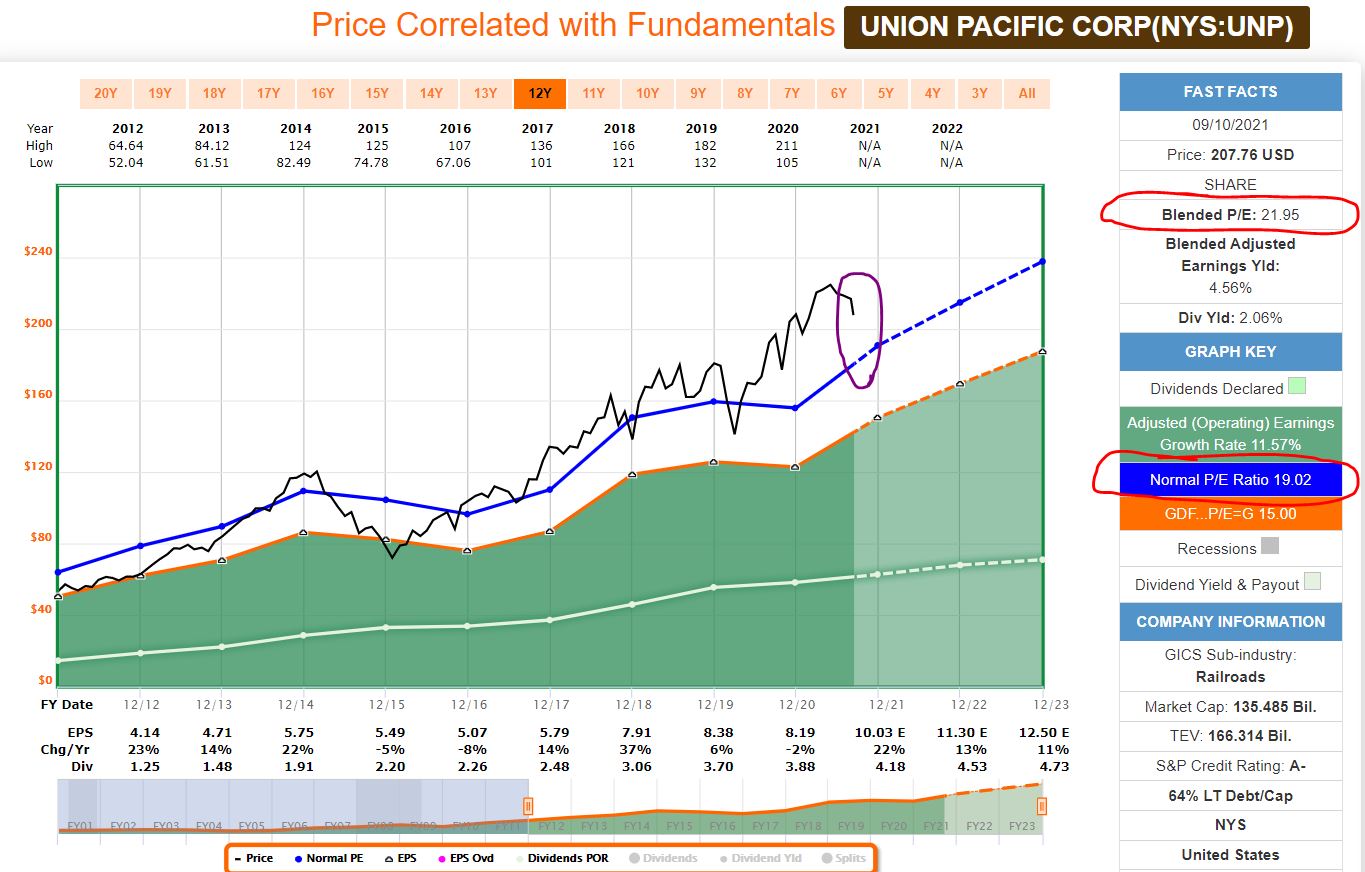 But a look at the 5-year picture shows that UNP’s current valuation is almost exactly in line with its recent history, suggesting that the stock is fairly valued. I also used yellow to highlight the fact that earnings are expected to grow nicely over the next few years. 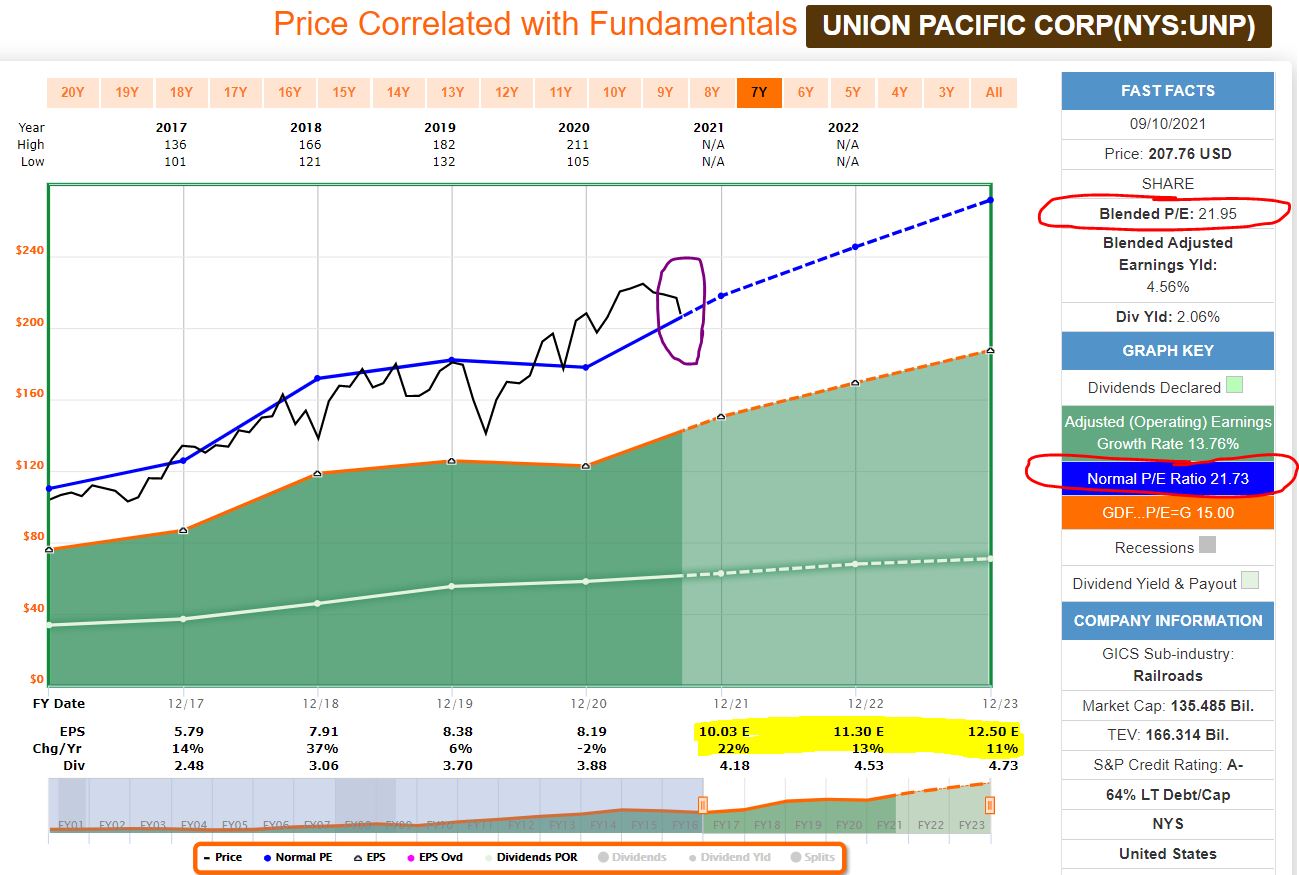 Finally, the following FAST Graphs illustration deals with free cash flow … and by that metric, Union Pacific appears to be a little undervalued. 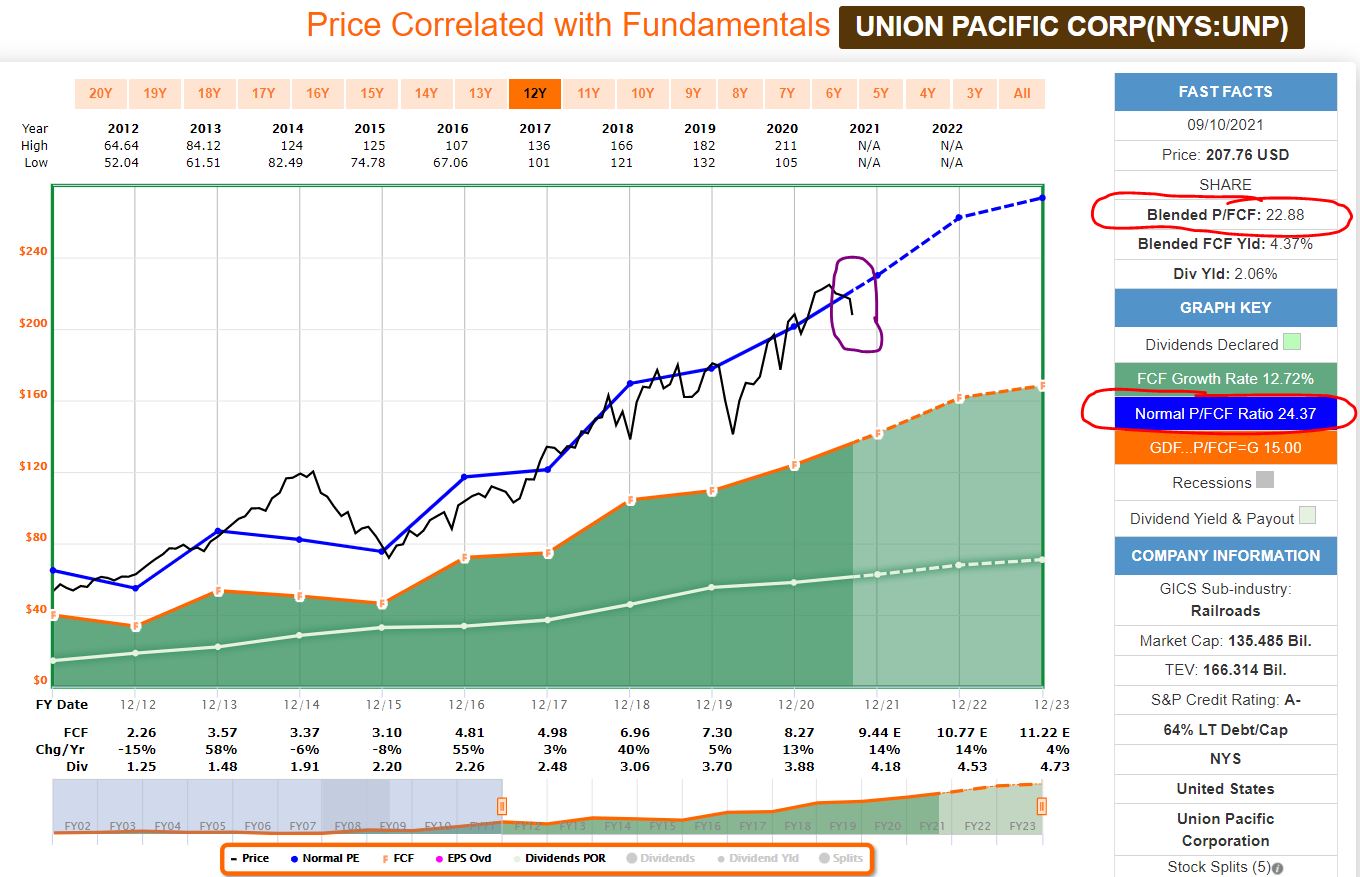 One other thing in that graphic caught my eye: The orange FCF line sits well above the white dividends line, showing how Union Pacific’s free cash flow easily has covered the dividend over the years.

Which lets us segue into the next section …

Within its second-quarter earnings presentation, UNP stated it would have a “Dividend Target Payout of about 45% of Earnings.”

That’s a reasonable and healthy target when it comes to keeping a strong balance sheet, and it falls in line with where Union Pacific’s payout ratio has been in recent years.

Earnings, of course, are not guaranteed to meet projections … but it’s nonetheless comforting to know that even in down years for earnings, UNP has increased its dividend. 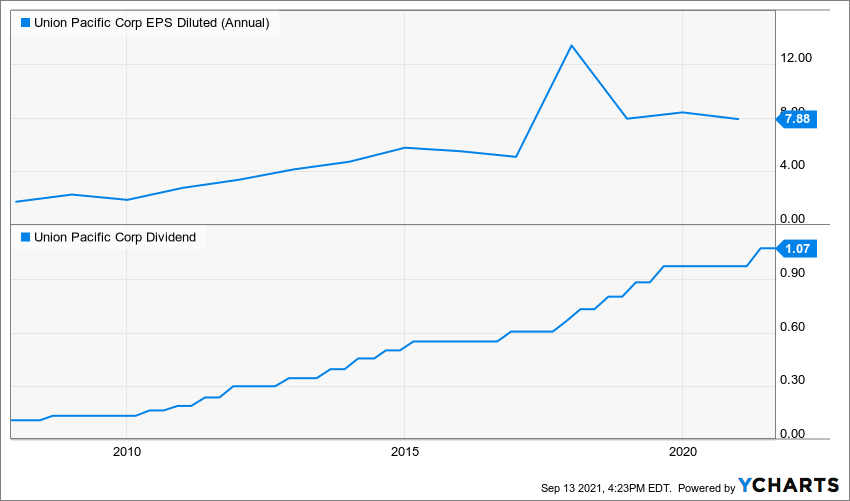 That will get reinvested automatically to buy another fraction of a share of UNP stock, per portfolio rules. The same thing will happen three months later, and then three months after that, and so on and so on.

We do the same with all 45 positions in the portfolio. That’s how an income stream gets built, and it’s why we named this project what we did.

Not long after I executed the order to buy UNP for the IBP, the stock price started heading lower. It almost hit $205 before closing Monday at $206.75 — down about a half-percent for the day.

One possible reason for the quick price drop: The U.S. Environmental Protection Agency is asking Union Pacific for answers regarding a hazardous waste site the railroad is supposed to be cleaning up. (Read about it HERE.)

Then again, maybe it had little to do with that. Three other railroads also saw their stock prices fall Monday, two by higher percentages than UNP’s drop.

I am NOT saying the hazardous-waste issue isn’t important, because it is. From an investing standpoint, however, it feels like “noise” — an external situation that temporarily makes a company’s stock price fall or rise.

Despite the news (or the “noise”), I’m glad to have added a proven, high-quality, dividend-growing company to the Income Builder Portfolio.