None of those gentle jibes, however, really paints a clear enough picture on how “yesterday” choo-choo trains are … because railroads actually are “so 1800s.”

Back in 1826, on a track he built on his estate in Hoboken, N.J., John Stevens demonstrated that steam locomotion could be a feasible mode of transportation. 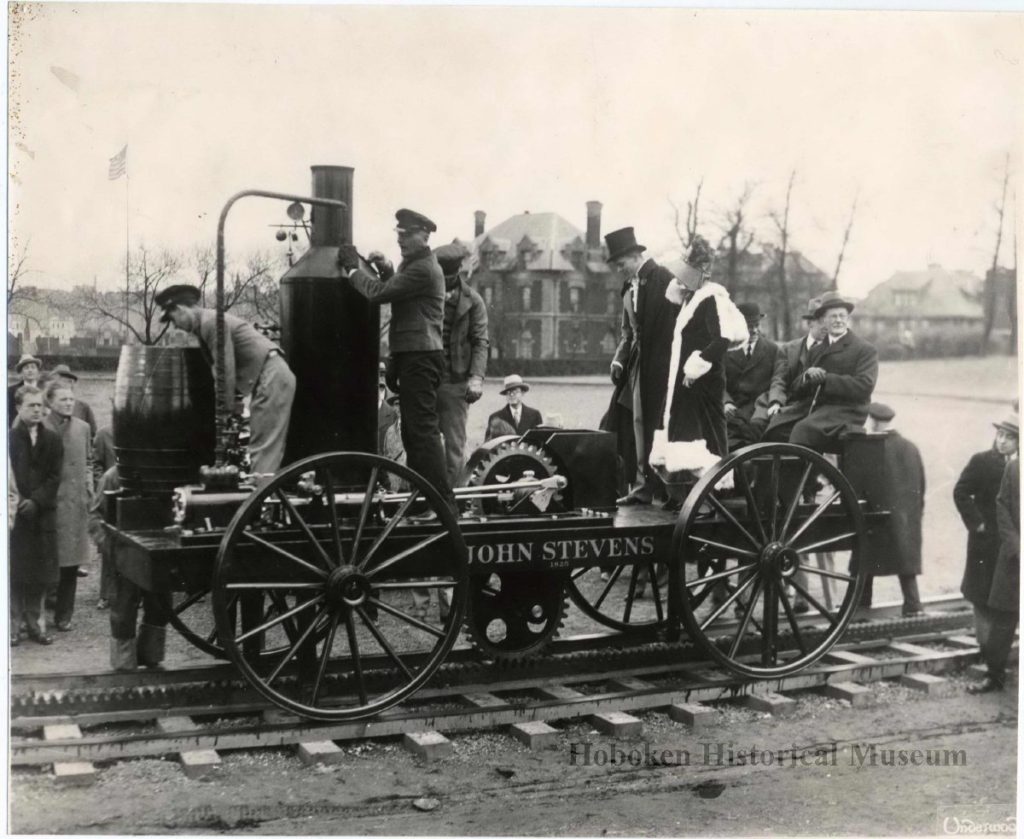 So yes, we’re coming up on the bicentennial anniversary of that historic event.

Just four years later, a train dubbed the “Tom Thumb” became the first U.S.-built steam locomotive to be operated on a common-carrier railway. Soon, tracks were being placed everywhere Americans wanted to go, from sea to shining sea.

By the mid-20th century, though, trains had lost a lot of their luster. If you needed to get somewhere fast, you took an airplane. If you wanted get somewhere economically, you drove a car. Trucks and pipelines became common ways to transport materials and liquids.

But you know what? Trains really aren’t “so yesterday” after all. They remain one of the best ways — the best way, according to many — to transport industrial, agricultural, consumer and energy-related products from Maine to California, and every point in between.

Major U.S. railroads are incredibly profitable businesses, and colleagues I deeply respect have told me that no Dividend Growth Investing portfolio is complete without owning stock in at least one of the big North American operators.

Because I want the Income Builder Portfolio to be complete, I’ve decided to go with the biggest — Union Pacific (UNP) — and I will execute a purchase order on this site’s behalf on Monday, Sept. 13.

Warren Buffett isn’t one of the colleagues I was talking about earlier, but the renowned investor has become a big fan of railroads as investments.

Indeed, he bought BNSF — formerly known as the Burlington Northern and Santa Fe Railway — in 2009, and it has been a fine performer for his company, Berkshire Hathaway (BRK.A).

In a 2011 television interview, Buffett explained why he wanted BNSF:

I felt it was an opportunity to buy a business that is going to be around for 100 or 200 years, that’s interwoven with the American economy in a way that if the American economy prospers, the business will prosper. It is the most efficient way of moving goods in the country. It is the most environmentally friendly way of moving goods, and both those things are going to be very important.

… It moves a ton of goods 470 miles on one gallon of diesel. A train replaces 280 trucks on the road. It emits far less into the atmosphere that’s damaging than trucking, and it moves – I’m talking about the whole rail industry – it moves 40% of the goods.

… And we’re going to have more people in this country, and they’re going to be using more goods over time. And sure, there’s a bad year from time to time. In the next 100 years, there will probably be 15 bad years, and I don’t know what order they’ll appear, but I also know the railroads will be essential to the country.

… But the biggest thing is the U.S. is going to do well. I mean, we can’t move the railroad to China or India. They haven’t figured out how to do that.

You know, Warren Buffett just might make it as an investor … even if Berkshire has been outperformed by the Income Builder Portfolio since we launched the IBP in January 2018.

In 2020, BNSF was the North American revenue leader among railroads, with Union Pacific close behind. Then there’s a huge gap to No. 3 CSX Corporation (CSX). 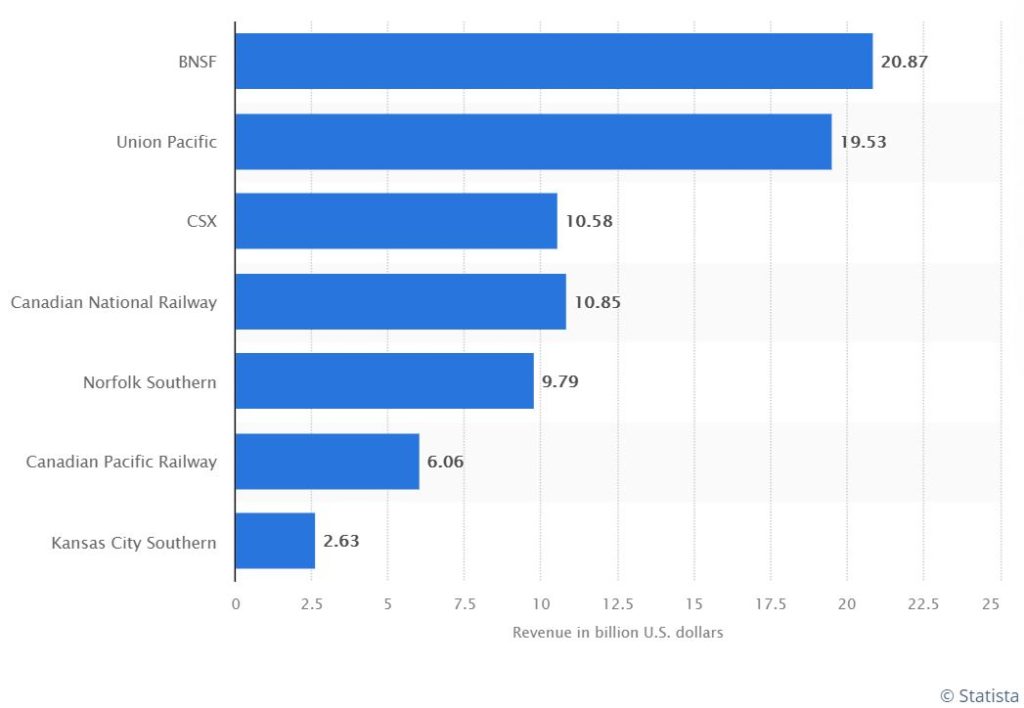 You and I can’t buy BNSF stock because Buffett took it private, but we can purchase shares in UNP — far and away the world’s largest railroad company by market share. 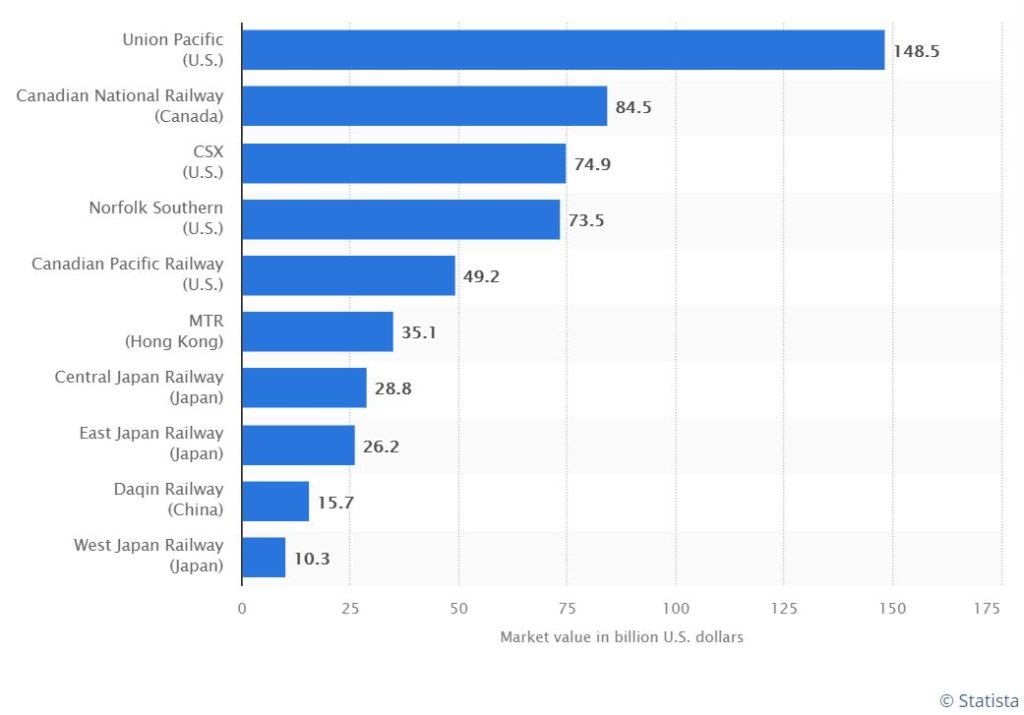 With a total return of more than 500% over the last decade, Union Pacific ranks second in its industry only to Canadian Pacific Railway (CP), and it has absolutely crushed the S&P 500 Index. 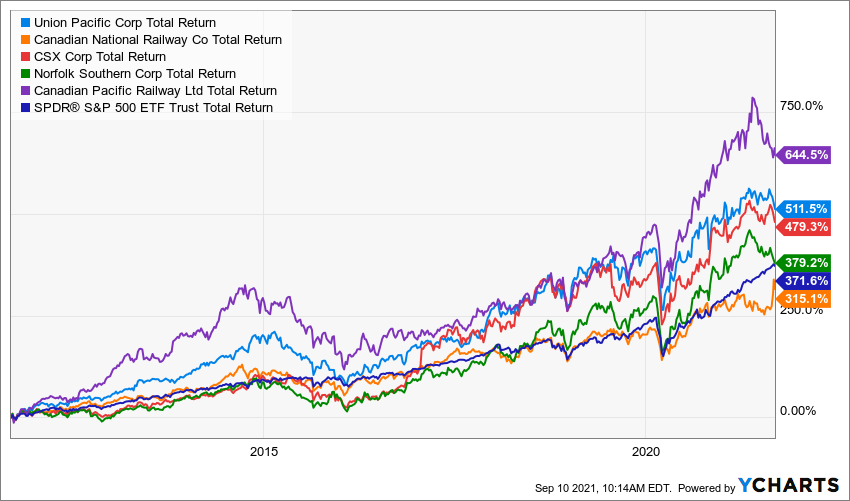 During the second quarter of 2021, Union Pacific showed significant year-over-year gains in most categories — including growth of 63% in diluted earnings per share, 59% in net income, 50% in operating income and 30% in operating revenues.

Q2 2020 was seriously affected by the COVID-19 pandemic, so UNP also presented comparisons to the second quarter of 2019. And while the growth obviously wasn’t as huge, it still was strong — 23% in diluted EPS, 15% in net income and 9% in operating income. Operating revenues, however, were down slightly from Q2 2019. 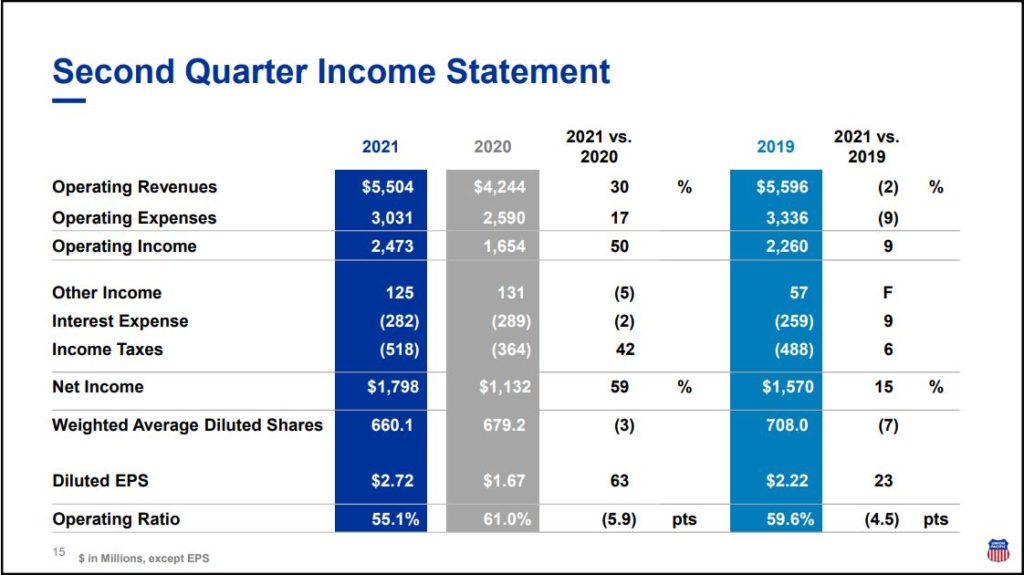 Strong financials are nothing new for Union Pacific, which has an enviable record in categories such as return on equity, return on invested capital, operating margin and free cash flow margin. 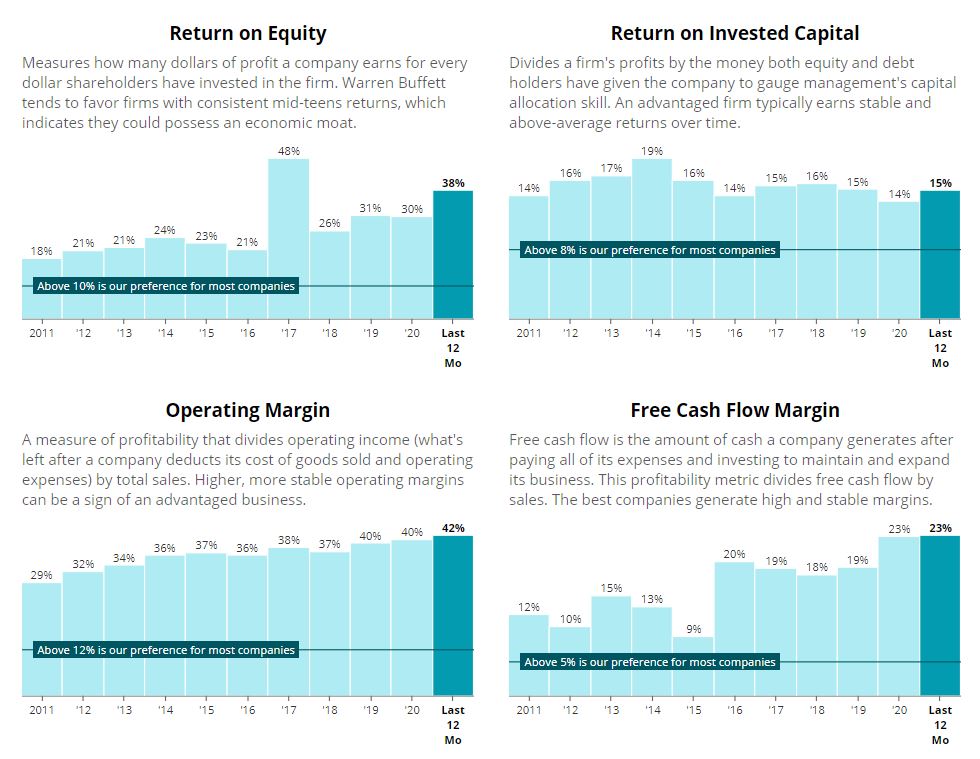 Investing is always a forward-looking game, and UNP upped several of its growth projections for the 2021 full fiscal year. 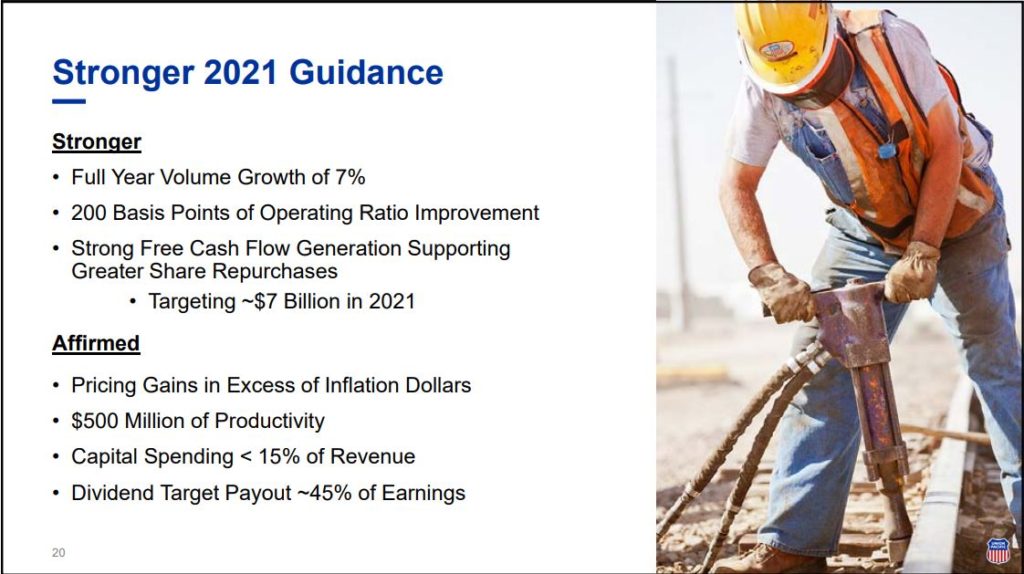 Given all of the data I’ve presented so far, it shouldn’t be surprising that Union Pacific gets high marks from those who judge a stock’s quality.

In May, Union Pacific announced a 10.3% dividend increase — marking the 15th consecutive year it has raised its payout.

UNP has averaged double-digit-percentage dividend growth over the past two decades.

Of the seven Class I railroads in the United States, six are publicly traded — and UNP easily has the highest yield of the bunch. The following chart doesn’t even take into account the recent raise, which has pushed the company’s forward yield to 2.1%. 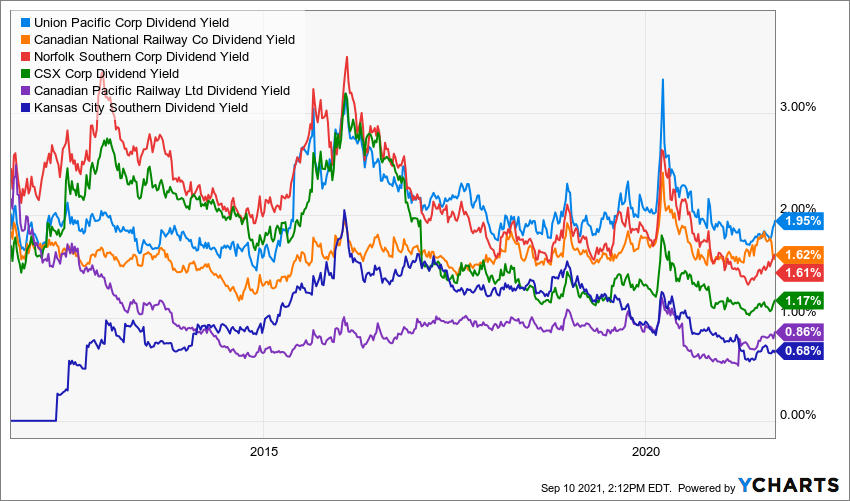 So there definitely was room for a railroad company, and I’m glad that the IBP is about to add one of the best.

I’ll explore Union Pacific’s valuation and other information in my post-buy article, which is scheduled to be published on Tuesday, Sept. 14.

Note: I also make videos about IBP selections for our Dividends And Income Channel on YouTube. Check out the latest one HERE.