First things first … I’ve changed the name of this real-money project. What used to be the Grand-Twins College fund is now the Growth & Income Portfolio.

That doesn’t mean I’ve changed the goal; I still plan to use this to help pay for the college educations of my now-2-year-old twin grandsons, Logan and Jack.

What it means is that I want the focus to be on the high-quality companies I’m buying and the portfolio-building concepts I’m discussing, and not on my personal goal … because other folks probably have very different kinds of plans for their investment dollars.

From the start, this has been a portfolio that has emphasized growth while also building an ever-rising income stream, so now the name fits the strategy.

Don’t worry, though … you’ll still get to see great photos of the adorable kiddos our family calls “LoJack”! 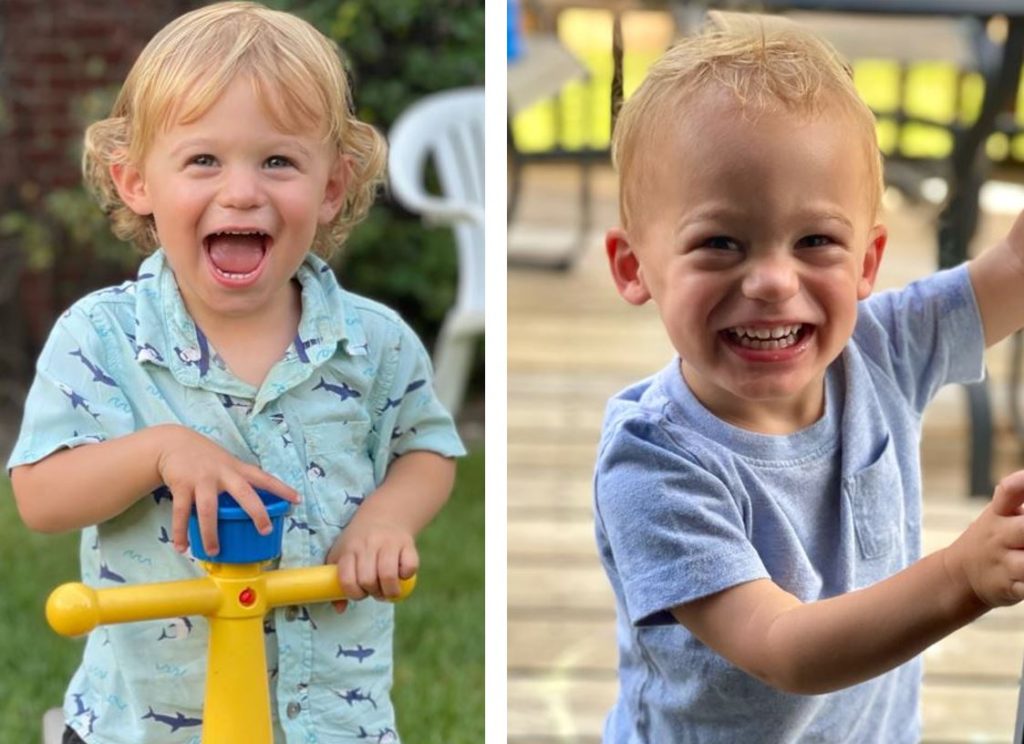 In honor of LoJack’s second birthday, my son’s father-in-law (the boys’ other grandpa, Mickey) very generously contributed $500 toward the cause.

I mentioned that to an investor friend of mine, and she said: “One idea for investing the FIL’s $$ is potentially buying more of what you have in that portfolio, but not necessarily spread across all names. Perhaps the 5-10 stocks you believe in most?”

Just about all the names are high-quality, deep-moat, industry leaders. I have confidence in all of them!

So on the last day of August, I took my monthly $100 contribution and about half the dough my fellow grandpa supplied, and I divided $410.66 roughly equally between the Growth & Income Portfolio’s 16 existing stock positions. 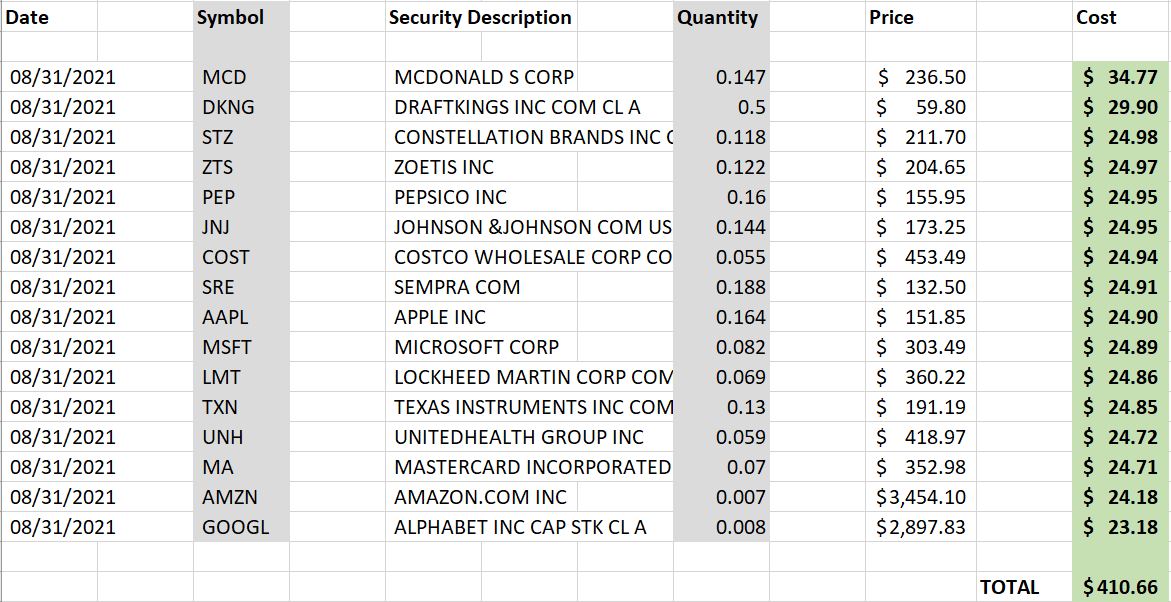 I made all the buys using Fidelity’s “Stocks by the Slice” feature — a perfect way for small investors to acquire fractions of great companies. (Most were for $25, though for whatever reason actual purchases always come out a few cents less than the designated amounts.)

There’s no shame in making these kinds of tiny purchases if that’s all the money one has available to invest. The shame would be not investing because you think such small amounts of money “don’t matter.”

Launched in June 2020, the Growth & Income Portfolio already is worth almost $4,000 — thanks to consistent investing, a bullish stock market that has fueled total return of about 25%, a few gifts from relatives, and the growth and reinvestment of dividends. 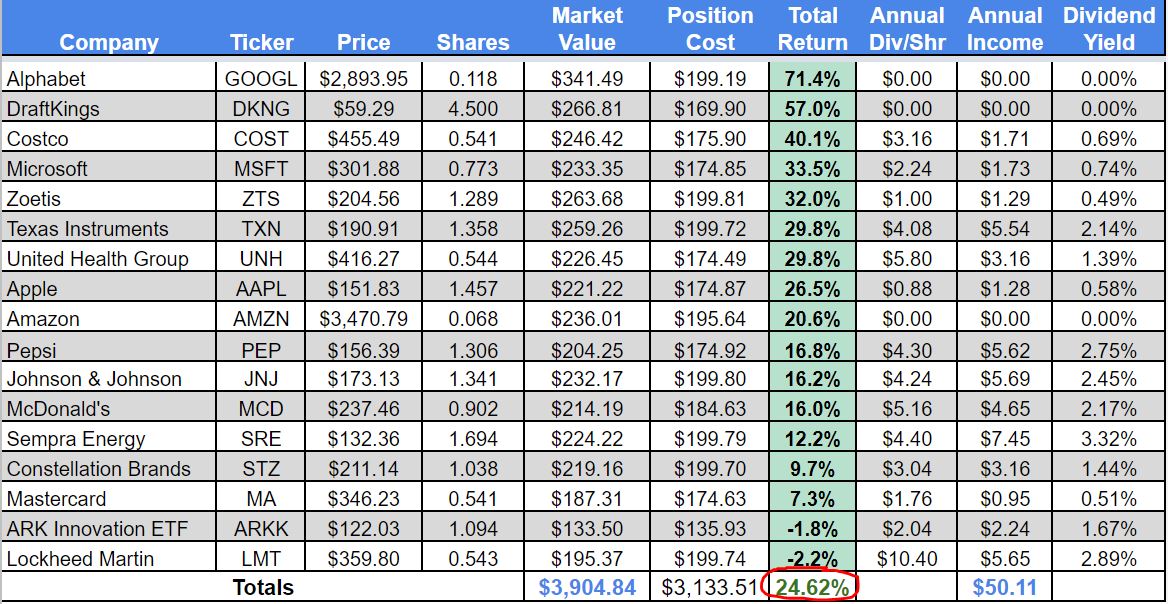 The above table is updated often; it, as well as links to every GIP-related article I’ve written, can be found on the home page — HERE.

The latest buys left about $300 for September investments — my regular $100, and the approximately $200 remaining of Mickey’s gift.

I didn’t add to one GIP position: the ARK Innovation ETF (ARKK). The exchange-traded fund, which invests in “disruptive technology” companies, has performed poorly since I bought it on the final day of 2020. 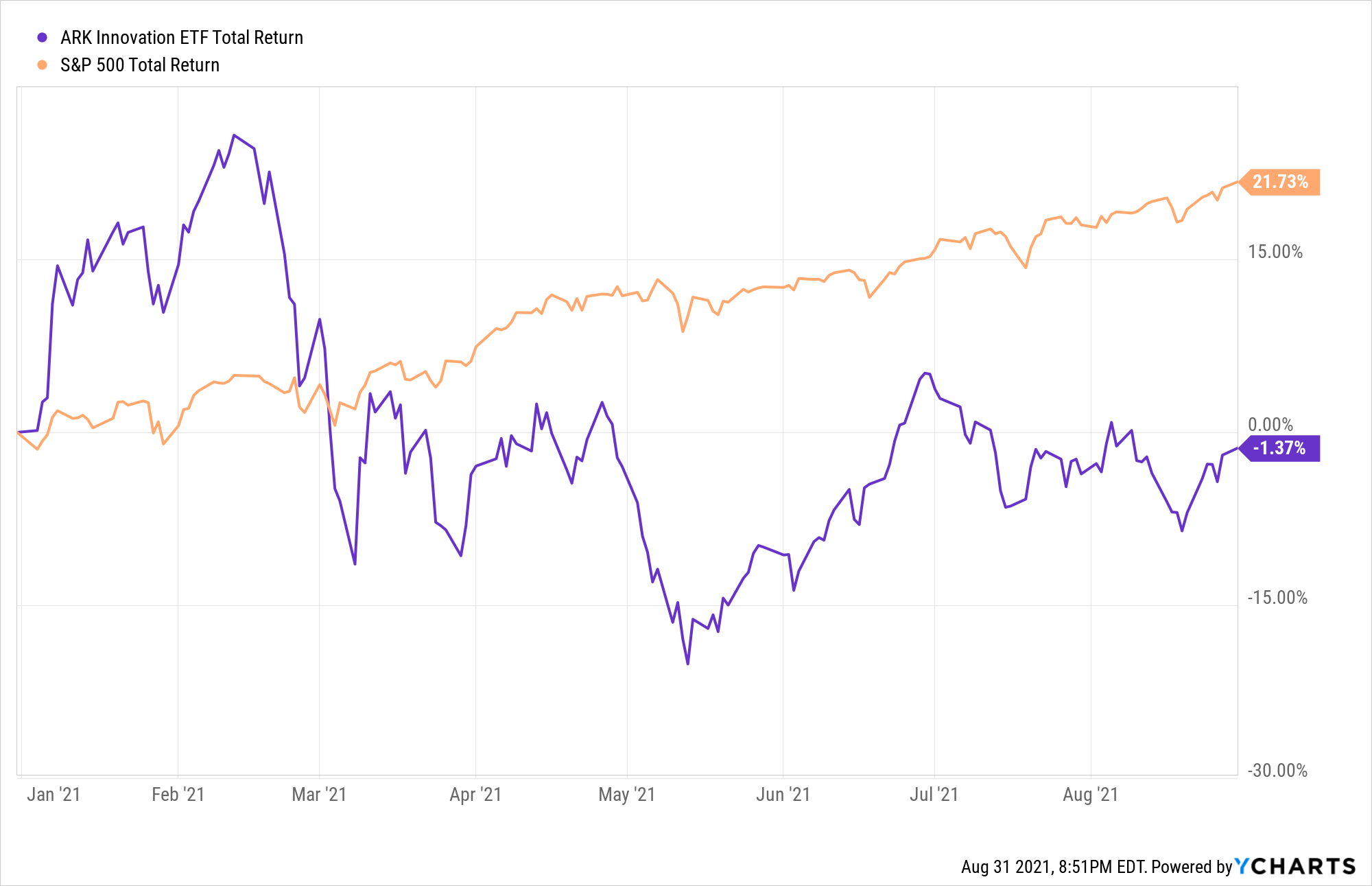 Paying a .75% fee to fund managers who have underperformed the market by 23 percentage points is not my idea of money well spent, so I’ve put ARKK on “probation” — meaning it is a candidate to be sold if things don’t improve.

I allocated more than $25 each to two companies in August: DraftKings (DKNG) and McDonald’s (MCD).

With DraftKings, I bought a half-share (costing $29.90) and plan to do the same next time. I consider the gambling site to be the portfolio’s only speculative stock — but with a 57% gain, second only to Alphabet (GOOGL) among GIP holdings, it sure has been a great performer so far.

As for McDonald’s, was the $35 buy a sign of my super-sized confidence in the Golden Arches? I could try to claim that … but the fact is that I accidentally typed in $35 instead of $25. Really. Don’t let that happen to you, kids!

Having said that, this McDonald’s position has experienced a solid total return of 16% since it became part of the portfolio in July 2020, and 12 of the 13 analysts surveyed by TipRanks in the last month call the stock a “buy.” Ten see a double-digit-percentage upside for MCD stock over the next year. 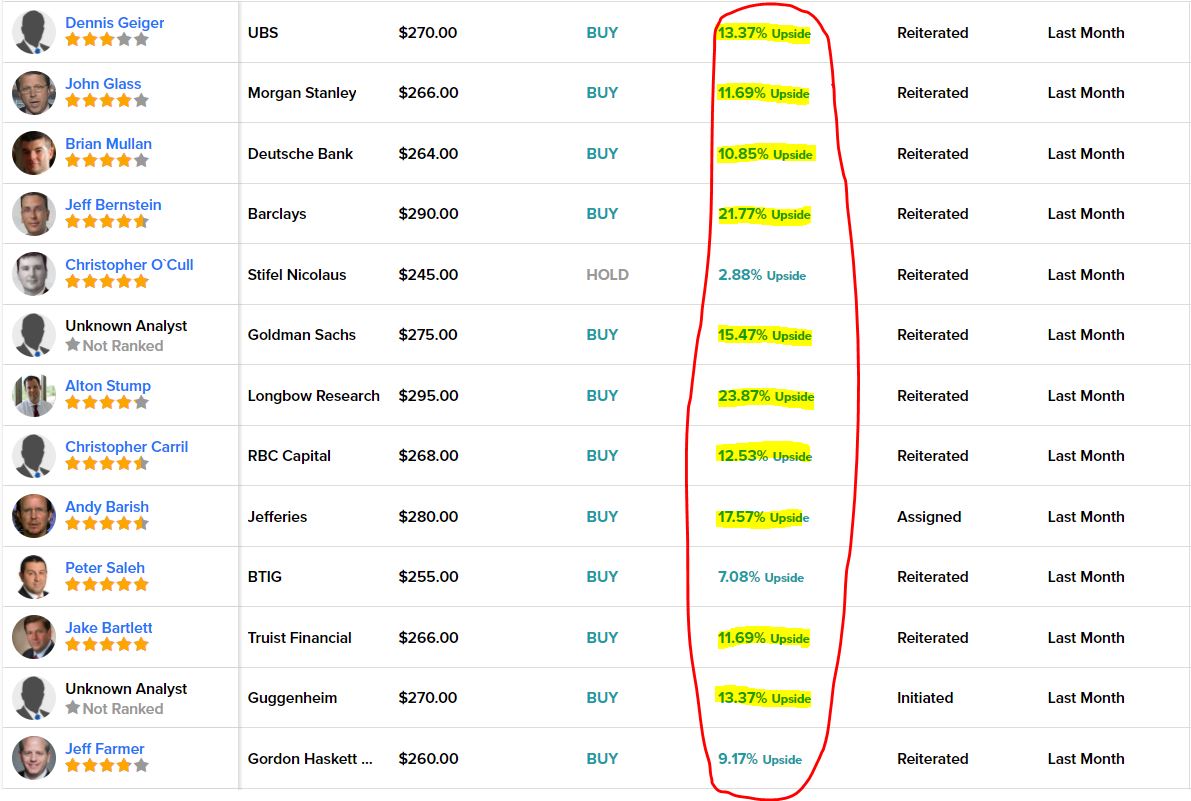 Now that I’ve mentioned analysts, I’ll use that as a segue into the next section.

Although I pay pretty close attention to valuation when making investments for my personal portfolio, I am not very concerned about price when it comes to the GIP. I plan to build this account via small buys over nearly two decades, so there probably will be times every stock is overvalued, fairly valued and undervalued.

However, I do realize that some folks following this project are probably investing considerably more than $100/month as they chase their goals.

And because this is all about presenting candidates for further research, I’ve worked up the following table — which includes Morningstar’s fair value estimate, the consensus forward price/earnings ratio, and various analysts’ target prices for each company.

Green means “go” — I’m not saying “BUY BUY BUY!” but rather the much more boring: “If you are interested in this stock, its valuation and/or analysts’ views of its future prospects suggests that it could be worthy of your own thorough due diligence.”

Blue indicates a company that could be in the fair-value range, and yellow shows that analysts believe the stock is probably overvalued.

Although analysts like these do employ specific methods in calculating their valuations and target ranges, they tend to be pretty subjective — as is my above analysis of their analysis.

Besides, estimates are adjusted regularly, especially for high-performing companies during a bull market.

For example, here is Morningstar’s most recent look at Zoetis (ZTS), the global leader in animal health-care products:

In addition to the valuation on the left, I included the top of the analyst’s very positive review of Zoetis’ operations. Right off the bat, she says the company’s performance convinced Morningstar to raise its fair value estimate by some 23%.

Though that’s a considerable hike, the stock is still 18% overvalued in Morningstar’s view.

Maybe they’re right that Zoetis isn’t worth anywhere near the $204.65 I just paid for this latest GIP slice, but Morningstar tends to underestimate this fine company’s ability to command a premium price. 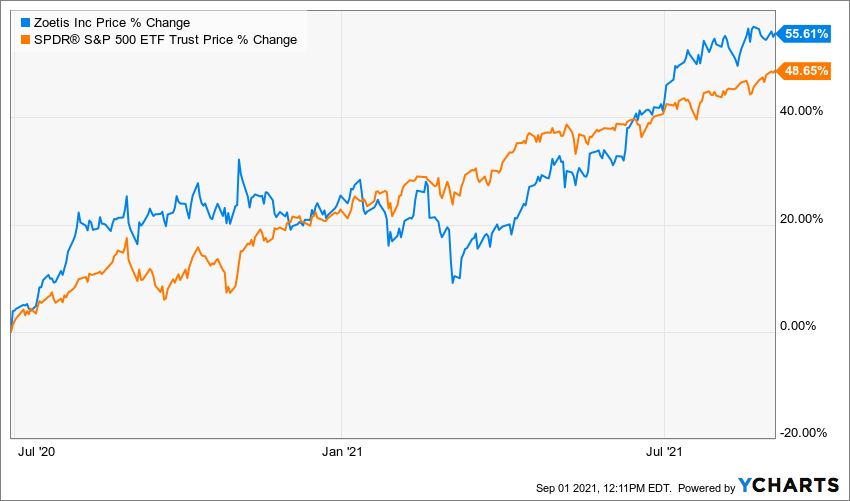 Does that mean Morningstar’s people were “wrong” and I was “brilliant”? Well, absolutely!

No, seriously, it just shows that this isn’t an exact science, and that’s why it should be only a part of what goes into considering a stock for purchase.

As I look over the analytical table I presented at the top of this section, the companies that appear most attractive right now are Alphabet, Amazon (AMZN), Lockheed Martin (LMT), Sempra (SRE) and Constellation Brands (STZ).

Those that seem most overvalued are Apple (AAPL), Texas Instruments (TXN), UnitedHealth (UNH) and, yes, Zoetis.

And some, like Microsoft (MSFT), really straddle the line — sometimes even when viewed by the same set of analysts.

The above image shows how highly Value Line regards Microsoft, giving MSFT top scores in every quality-related category (purple-circled area). But while the data in the green-circled area makes the stock look quite expensive, the more medium-term projection (yellow highlight) is for a hefty 25% price appreciation over the next 18 months.

Microsoft is another stock that has seen constant valuation upgrades by analysts because it has kept outperforming their expectations — and the company also is the subject of my most recent video for our Dividends and Income Channel on YouTube (see it HERE).

Although I think a lot about growth when a portfolio has such a long time horizon, I am a Dividend Growth Investing guy at heart — so income does matter to me.

Five of the GIP’s 14 dividend payers had distributions in August, with $2.82 coming into the portfolio. As always, the income each stock produced was reinvested right back into each equity, adding a fraction of a share of each.

Although $2.82 doesn’t sound like much, it was 14% more in dividends than the same five stocks paid in May.

None of the portfolio’s holdings announced a dividend raise in August, but I’m looking for declarations of increases in September from Microsoft, Texas Instruments, Lockheed Martin and McDonald’s. Here is the percentage by which each of the four has raised its dividend the last five years, with the most recent (2020) highlighted in green:

Because I like to be conservative with my projections, and because the trend generally has pointed downward for each of those companies, I would guess that each will give a slightly less-generous raise next month.

Nevertheless, I wouldn’t be all that surprised if any of the four goes big. That’s especially true for Microsoft, which has had an amazing year and which has the cash flow to easily cover a large increase; and McDonald’s, whose 3.2% hike a year ago was its smallest ever.

By any name, this portfolio of high-quality companies just keeps doing its job, with prices appreciating and dividends growing.

I’m confident that will still be the case a few years from now — when Logan and Jack are playing baseball instead of sitting in a chair shaped like a mitt — and for years beyond that, all the way to when they start going to college. 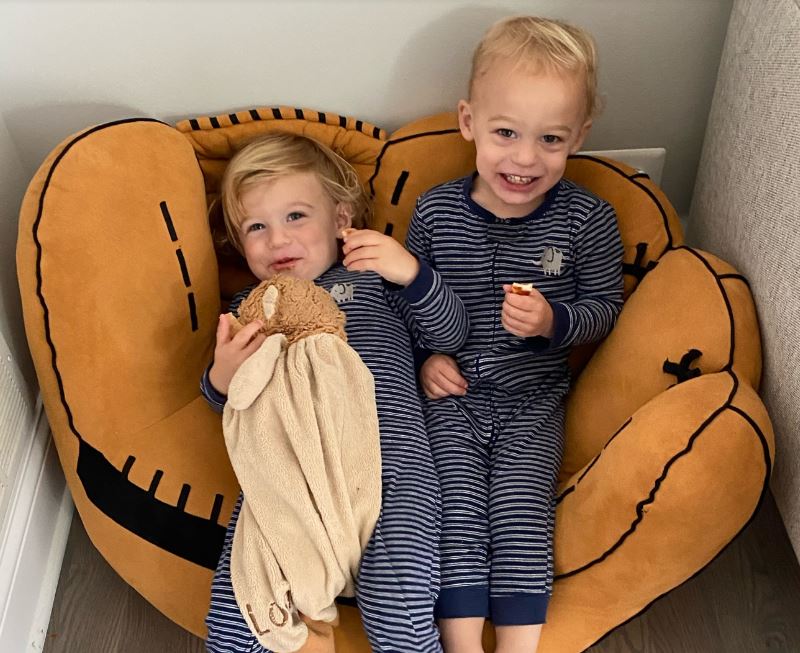 Meanwhile, outside of the Growth & Income Portfolio, my personal investments include stakes in most of these stocks. As I said, one doesn’t have to be saving for college to appreciate these blue-chip businesses.

Note: For those who prefer an even larger helping of dividends, I also manage the Income Builder Portfolio for this site. That real-money project includes stakes in 44 stocks, and my next pick will be revealed in an article scheduled to be published on Saturday, Sept. 11. Until then, you can see the entire portfolio HERE.