In professional sports, it’s the general manager’s job to build a winning roster. The coach is tasked with properly deploying the players, each of whom is expected to perform his or her role well.

I’ve long believed that putting together and managing a stock portfolio is kind of like being the GM/coach of a team.

So even though my primary strategy is Dividend Growth Investing, I am willing to find spots for “players” that can fill different roles — such as those in the following graphic:

There’s tobacco giant Altria (MO), a Dividend King with more than a half-century of dividend growth and a 7.2% yield … paint-maker Sherwin-Williams (SHW), a Dividend Aristocrat with decades of double-digit annual increases … and warehouse retailer Costco (COST), with a perfect Simply Safe Dividends score and a long history of raising its payout.

Oh, I know some DGI practitioners might pooh-pooh the likes of COST or SHW due to those stocks’ sub-1% yields.

But when a portfolio includes high-yielding performers such as MO, I think there’s room for growthier role players — which just so happen to be total-return superstars. 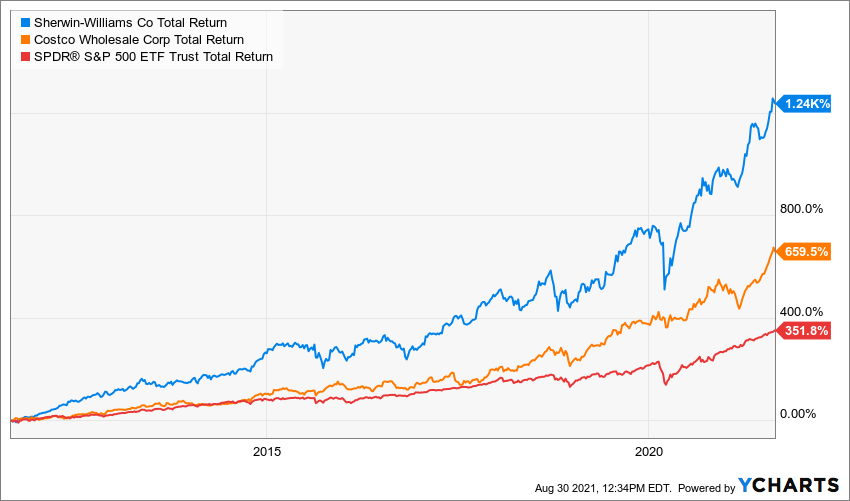 MO, COST and SHW are all part of the Income Builder Portfolio “team” that I’ve been assembling since the start of 2018.

I added to each position on Monday, Aug. 30, when I executed purchase orders totaling about $1,000 on behalf of this site’s co-founder (and IBP money-man) Greg Patrick.

I decided to put most of the dough toward MO because it appears to be a bargain compared to COST and SHW. I’ll get to valuation in a little bit, but first let’s talk some more about income.

Top of the Chart

Aside from dividend reinvestments, we hadn’t bought Altria since August 2018. Because of MO’s high yield, it nonetheless remained one of the IBP’s biggest dividend generators.

With Monday’s buy, MO has ascended to the top of the chart … and it offers an interesting contrast to where COST and SHW reside in this image showing the IBP’s top-4 and bottom-4 income producers:

Obviously, I wasn’t thinking about dividends very much when I chose to include Costco and Sherwin-Williams in the IBP.

I look at the income those companies and the portfolio’s other low-yielders produce as a nice little bonus — something above and beyond their outstanding stock-price appreciation.

As I mentioned in my previous article, Altria just announced a 4.7% dividend raise, marking the corporation’s 52nd consecutive year of increases. Sherwin-Williams and Costco have been growing divvies aggressively for years, too. 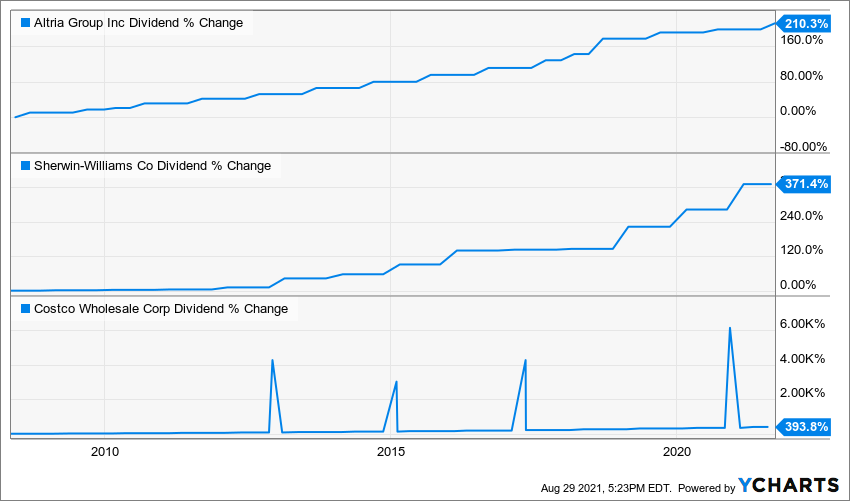 The bumpiness in the Costco chart above reflects the special dividends that its board of directors declared every few years. Most recently, COST paid a $10/share special in 2020.

The additional shares of Altria, Sherwin-Williams and Costco that were bought Monday will add about $43 to the IBP’s income stream; naturally, MO will generate most of that. The three positions now are expected to produce about $206 in annual income, roughly 6.6% of the portfolio’s projected $3,091 total.

Altria will be the first of the three to deliver Divvy Dollars into the IBP. Because we made this buy well before MO’s Sept. 14 ex-dividend date, all 49.8079 shares will be part of the calculations. With the quarterly dividend at .90/share, the payout will be $44.83.

In accordance with portfolio rules, that sum will be automatically reinvested into MO, buying another share or so. Then, three months later, that process — informally known as “dripping” — will play out again, but with a slightly larger share total.

COST and SHW also will do the whole dripping thing, as will the IBP’s 41 other holdings … and that’s one way the portfolio’s income stream experiences compound growth.

There’s no way to sugarcoat it: COST and SHW are overvalued by almost any measure. In the table below, only Altria has green “go!” shading in any category.

Morningstar’s fair value estimates provide significant contrast between MO and SHW, which is trading at more than twice the price that Morningstar’s analysts believe the stock is worth. 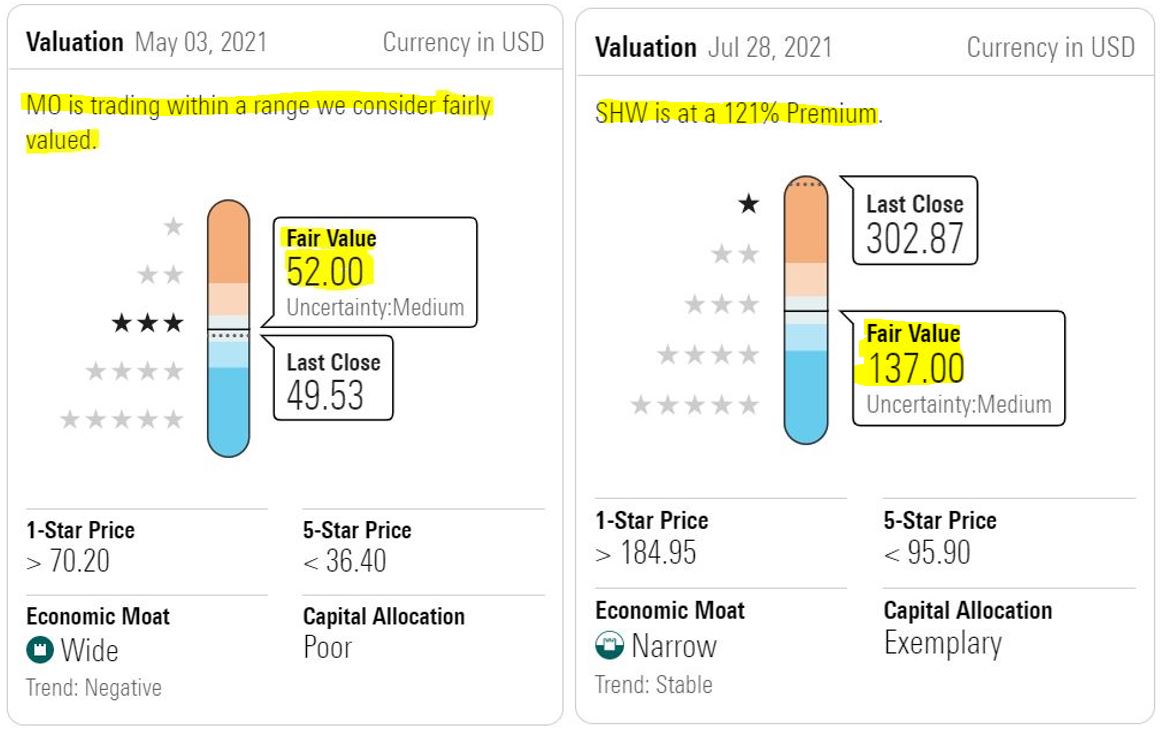 Since 2009, Altria has been part of Morningstar’s “Dividend Select Portfolio,” which owns “stocks that are expected to provide large, reliable, and growing dividends.”

MO also is in Value Line’s model portfolio of “Stocks with Long-Term Price Growth Potential,” as VL believes its price could more than double over the next 3-5 years (red-circled area of image below). Curiously, Value Line says MO already is trading at a premium to the midpoint of its 18-month target price range.

Although Value Line agrees with other analysts that Sherwin-Williams is overvalued, SHW is one of 100 companies on the analytical firm’s list of “Highest Growth Stocks.”

As is often the case, one has to be willing to pay up for growth. 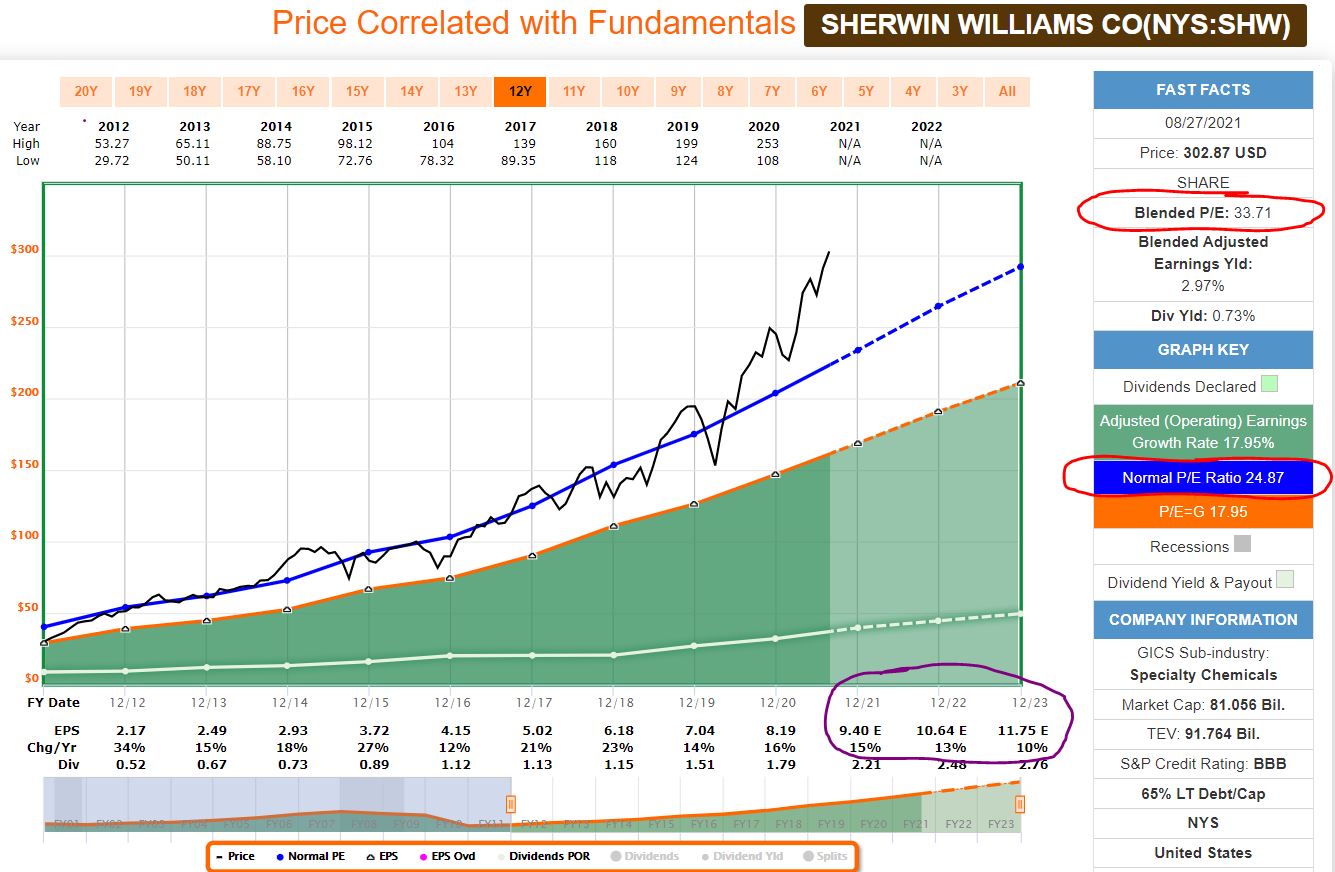 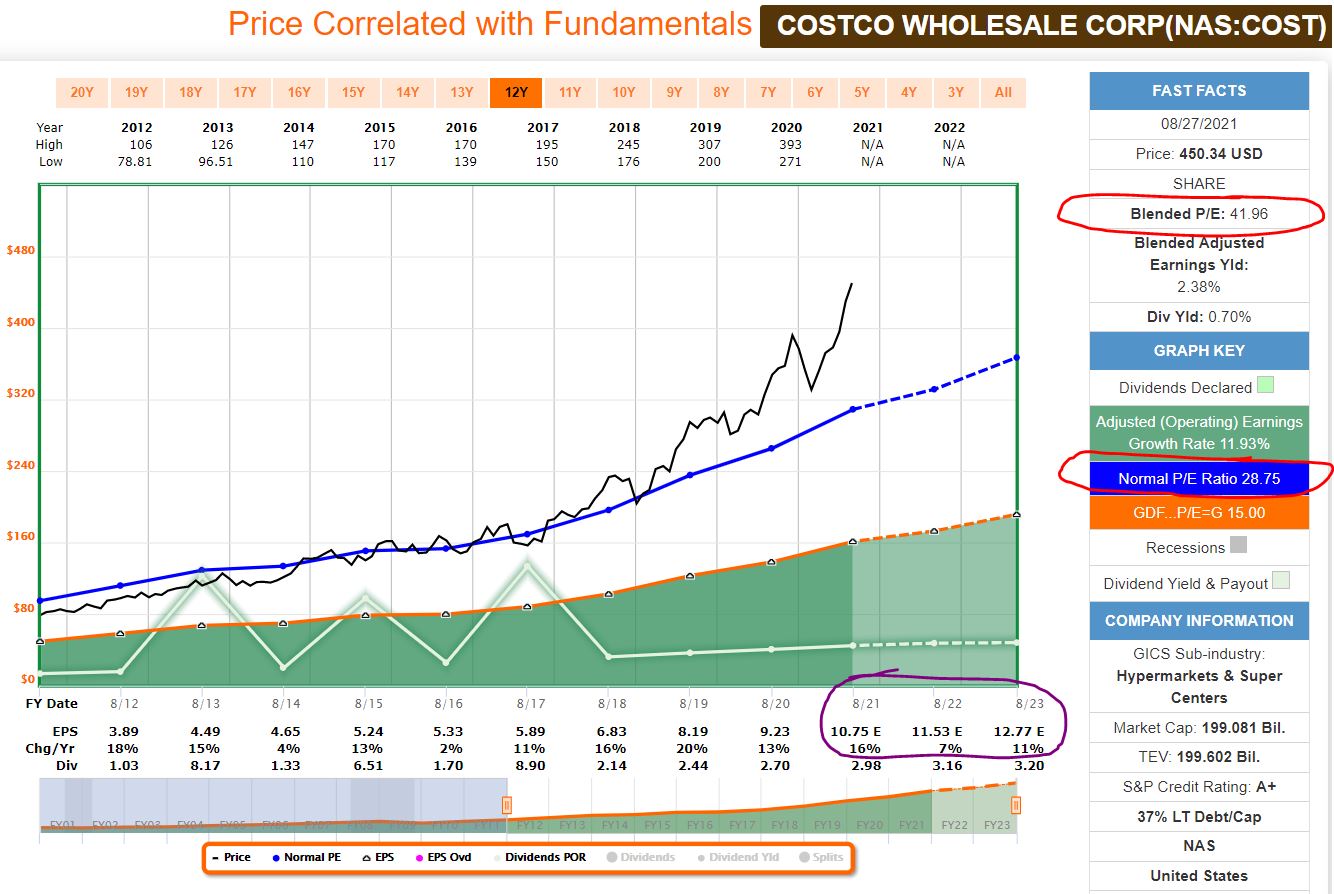 At least both SHW and COST are expected to grow earnings at a very nice clip, as indicated by the purple-circled areas of the preceding images. But does that growth — 7% to 16% annually for Costco and 10% to 15% for Sherwin-Williams — justify the current prices?

The forecasts say Altria won’t grow earnings as rapidly — only about 6%/year (purple-circled area below) — but that’s A-OK for a company that is as undervalued as FAST Graphs shows MO to be. 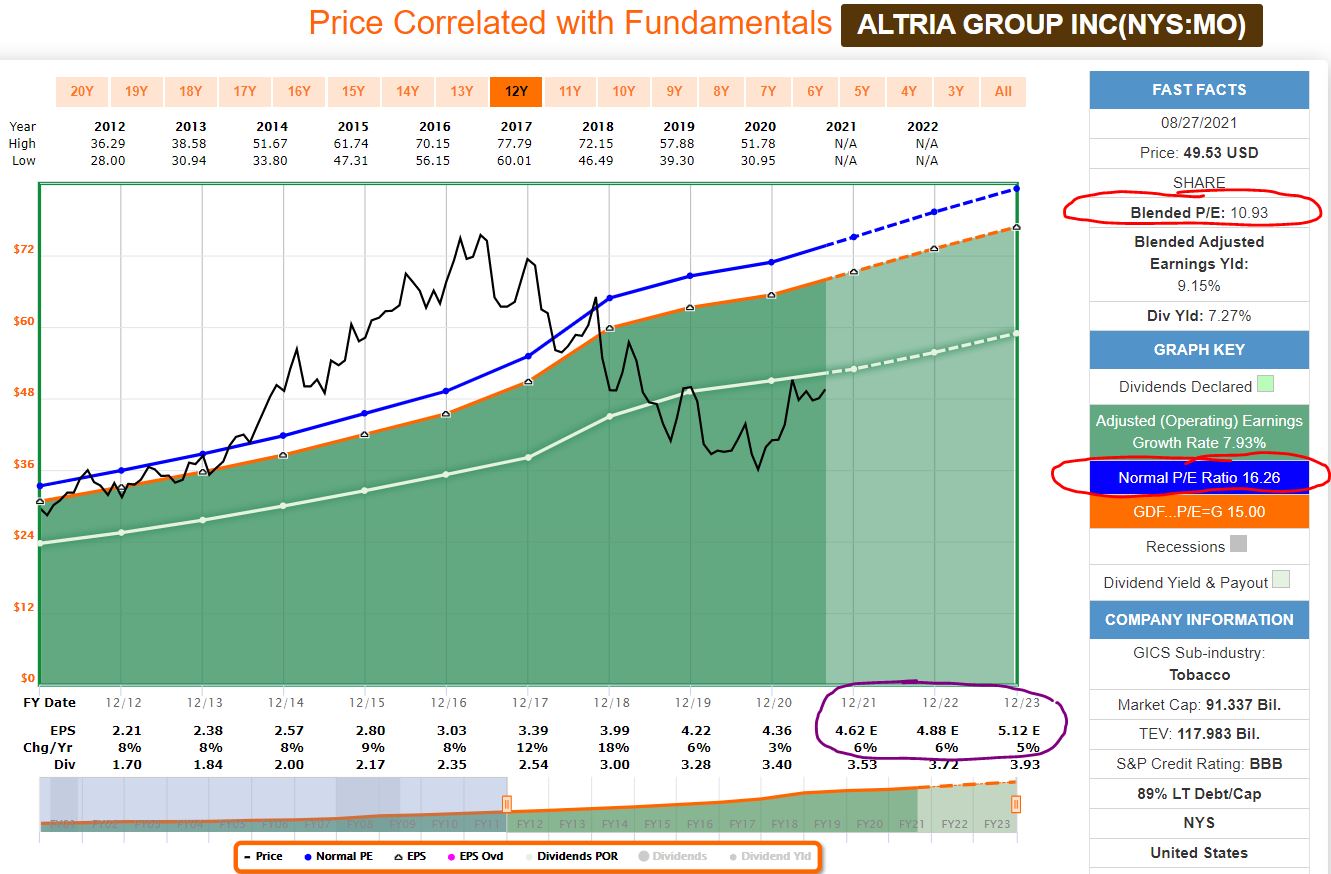 If Costco and Sherwin-Williams are so expensive, why did I decide to add to those positions now? Why didn’t I just put the entire $1,000 semi-monthly allocation into Altria?

Well … over time, I want to build up all IBP positions, and I believe making occasional small investments even into seemingly overvalued stocks is an appropriate way to do so.

I mean, it’s not as if SHW and COST were bargains when we initiated positions in them earlier this year, or when we added to both on April 12, but both have crushed the market. 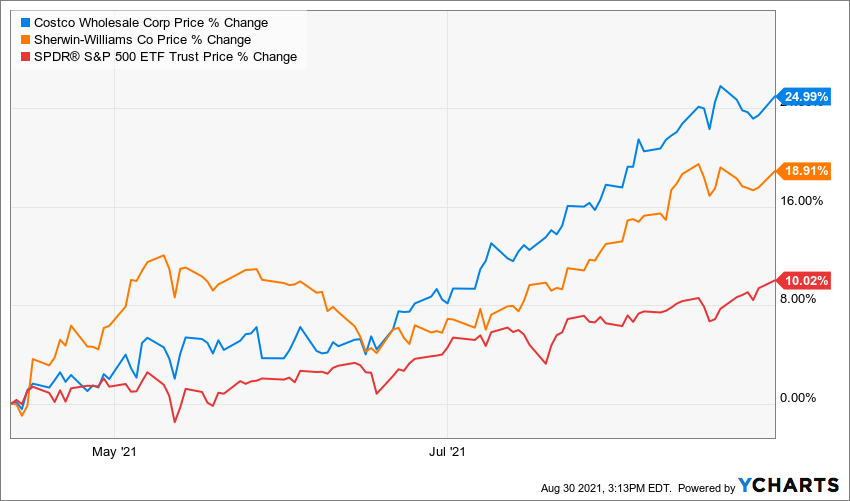 On the other hand, had we invested the full grand into MO, it would have become one of the Income Builder Portfolio’s largest positions. Given Altria’s mediocre total return as an IBP component, as well as the company’s decent but hardly sensational outlook, I’m not sure it merits such a starring role.

As the IBP’s general manager and coach, I’m willing to let these three players perform their roles as they contribute strongly to the team’s overall success.

Note: I also manage my Growth & Income Portfolio for this site. Formerly known as the Grand-Twins College Fund, its 17 positions can be seen on the GIP home page — HERE. A new article about August’s stock selections is coming soon. Also, be sure to check out my videos on our Dividends and Income Channel — HERE.