Sitting here today, it’s easy to say what an investor should or shouldn’t have bought 3 1/2 years ago.

For example, knowing what we know now, only a dolt would have gone for tobacco king Altria (MO) rather than market-crushing growth stocks like Costco (COST) and Sherwin-Williams (SHW). 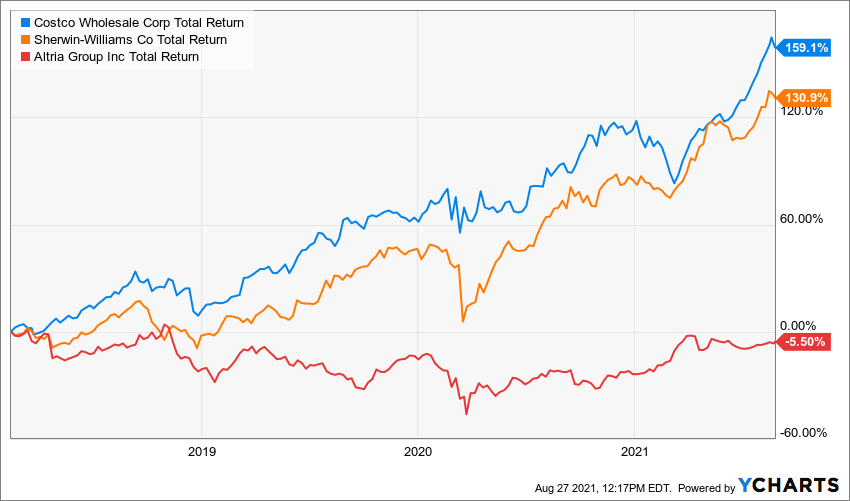 Costco and Sherwin-Williams have been gorillas. Altria? Woof! Woof! What a dog!

And any person who let history be his or her guide would have looked at the performances of MO, SHW and COST since the dawn of the new millennium and said, “Well, duh … of course I’m investing in Altria!” 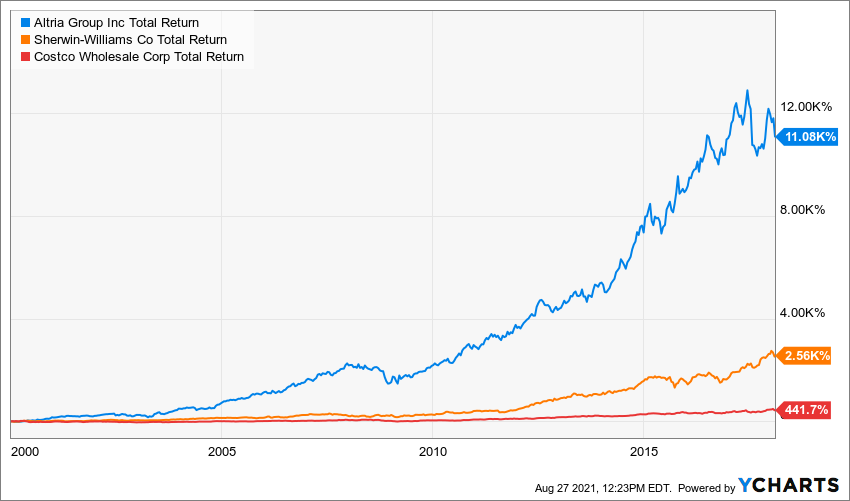 Back in February 2018, I chose Altria as the third stock to join the recently launched Income Builder Portfolio; today, I obviously wish I had invested in COST or SHW — or any of 1,000 other names.

I’m not bringing this up now to justify my less-than-wonderful decision but to emphasize that even if we research stocks well, we sometimes will make a pick that turns out to be a clunker. It’s something that has happened to every investor, from regular folks like me and you to all-time greats such as Benjamin Graham, Warren Buffett and Peter Lynch.

This also is my way to get into what we’ll be buying next for the IBP. Yep: Altria, Costco and Sherwin-Williams.

Come Monday, Aug. 30, I will execute purchase orders for MO, COST and SHW. The total spend will be about $1,000 — the semi-monthly amount allocated by this site’s co-founder (and IBP money-man) Greg Patrick.

Because the Income Builder Portfolio initiated positions in SHW and COST just this year, I will direct your attention to the articles in which I made cases for those companies — HERE for Sherwin-Williams, the world leader in paints and coatings; and HERE for Costco, the indomitable warehouse retailer — while I focus on MO in this piece.

This actually is the third time I’ve chosen MO for the IBP. In August 2018, undaunted by the stock’s 11% price plunge since our Feb. 13 buy, I reasoned:

Six months later, it’s still a great company … except now it pays shareholders even bigger dividends and is trading at a more attractive price.

That investment hasn’t gone great, either, but at least it’s slightly ahead on a total-return basis. 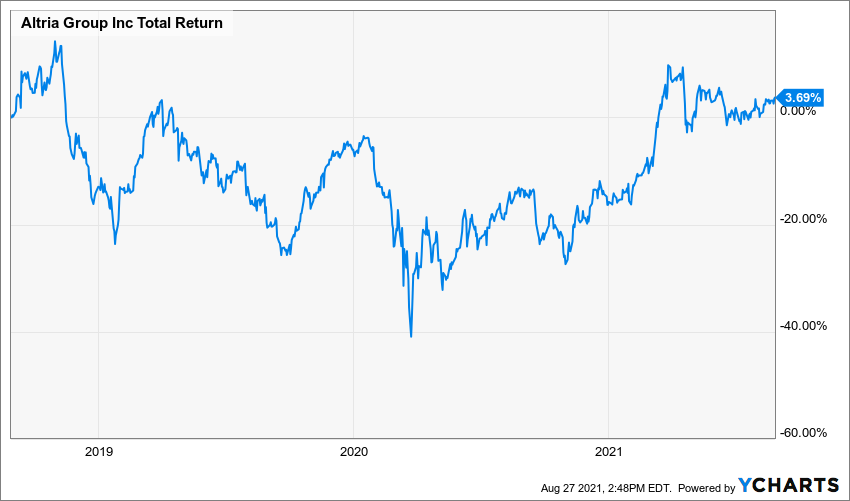 So am I hoping the third time is the charm?

Well, “hope” isn’t a great investing strategy. I picked MO again because I believe in the company’s future.

Its second-quarter 2021 earnings presentation on July 29 showed a business that is executing well. And although I won’t go into valuation in depth until my post-buy article, I believe MO’s price has been punished too severely.

Oh, and I love the fact that Altria just announced it’s raising its dividend for the 52nd consecutive year.

More on the dividend in a minute. First, let’s talk about the business.

On July 29, Altria reported 8.9% year-over-year revenue growth and 12.8% YOY earnings-per-share growth for the second quarter. Additionally, sales increased 1.9% in the first half of 2021, and earnings rose 5.5%.

The company also raised the lower end of its guidance range, now calling for full-year earnings growth of 4.5% to 6%.

Given all the headwinds the industry has been facing — including the COVID-19 pandemic, inflation, regulatory pressures, and continued gradual decline of cigarette usage — that’s some impressive data.

Of the decline in smoking, Morningstar analyst Philip Gorham wrote:

Although it is in secular contraction, the U.S. cigarette market is a relatively attractive one. We forecast the volume decline rate of the U.S. cigarette to be around 4% per year, a slightly faster rate of decline than most markets. However, the ability to consistently price above the rate of volume declines should ensure that Altria can continue to increase its revenue, earnings, and dividend. …

According to data from the Tobacco Atlas, more than 60% of all smokers intend to quit, and 42% have attempted to quit over the past 12 months. Yet in most markets, the smoking rate is in only a very modest decline, implying that the majority of smokers attempting to quit fail to do so.

Therein lies much of MO’s deep moat: It sells an addictive product that people keep using even though they know it’s harmful.

Most of Altria’s profits still come from cigarettes, and Marlboro remains the world’s No. 1 brand. Nevertheless, the company knows that its future depends on successfully marketing other products. 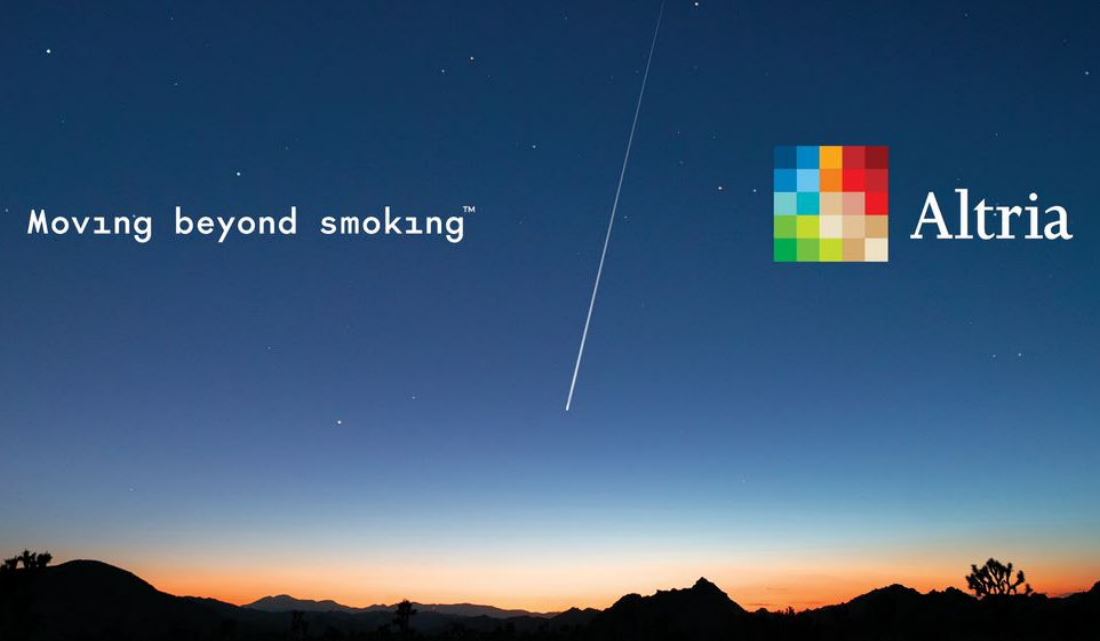 Altria recently sold its Ste. Michelle wine business. But it still owns about 10% of Anheuser-Busch InBev (BUD), the world’s largest brewer, and it has taken a large stake in Cronos, a Canadian marijuana company.

Meanwhile, Altria is rapidly expanding its non-cigarette nicotine products, especially iQOS — the heated tobacco technology that has been a major success so far for international sibling Philip Morris (MO).

What began with a small release in a handful of Charlotte stores has become a multi-state expansion in the Southeast, soon to go nationwide. 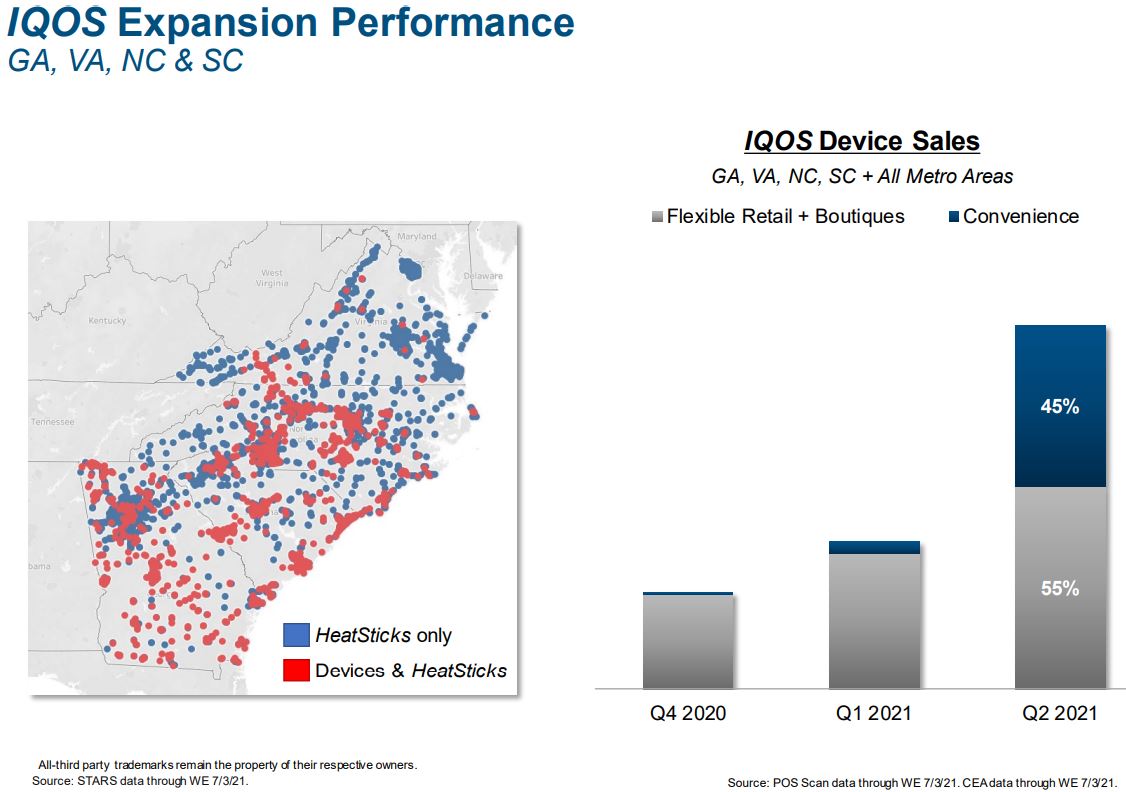 Given its major mess-up with JUUL electronic cigarettes — a $12.8 billion stain on Altria management’s otherwise solid record — it is imperative that the company gets things right with iQOS.

Investors apparently have appreciated the effort, as MO has a much better total return than the S&P 500 Index so far in 2021. Altria even has outperformed Costco, while running neck-and-neck with Sherwin-Williams. 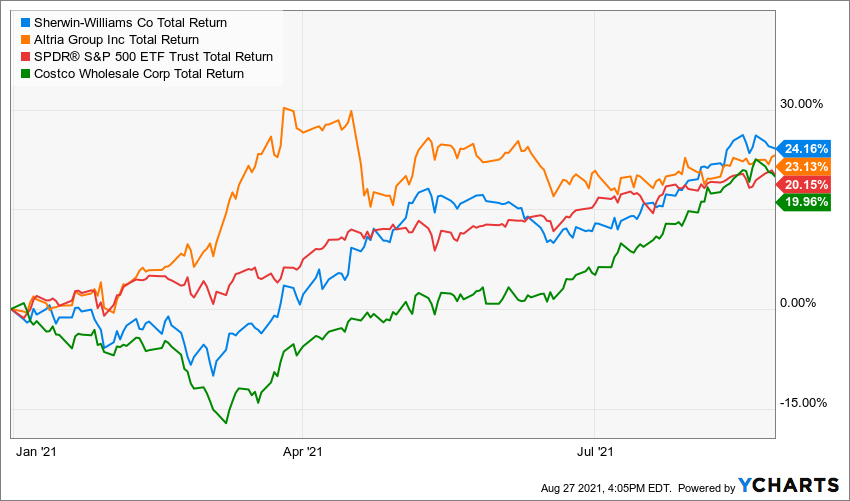 When it comes to those who judge quality, MO is viewed as a step or two beneath SHW and several strides behind COST.

It was one of the company’s smaller increases, but it was almost double last year’s pandemic-limited 2.4% hike.

Compare that to Sherwin-Williams and Costco, whose 0.7% yields are two of the IBP’s lowest.

Both of those companies do offer robust dividend growth: SHW announced a massive 23% increase in February and has averaged 12% growth over the last two decades; COST raised its payout by 13% in the spring and has averaged 13% growth the last 20 years. Costco also has paid a special dividend every few years, most recently a whopping $10/share last December.

Altria’s ex-dividend date is Sept. 14, meaning those who want to receive next quarter’s new higher payout must own shares by the previous day’s market close. COST and SHW don’t go ex again until October and November, respectively.

If you look closely at the table of MO’s dividend hikes, you’ll see they had raises of 10.3% and 6.3% during the Great Recession. Similarly, the following FAST Graphs image shows that Altria has grown earnings every year — even during the recession and in its immediate aftermath (blue-circled area). 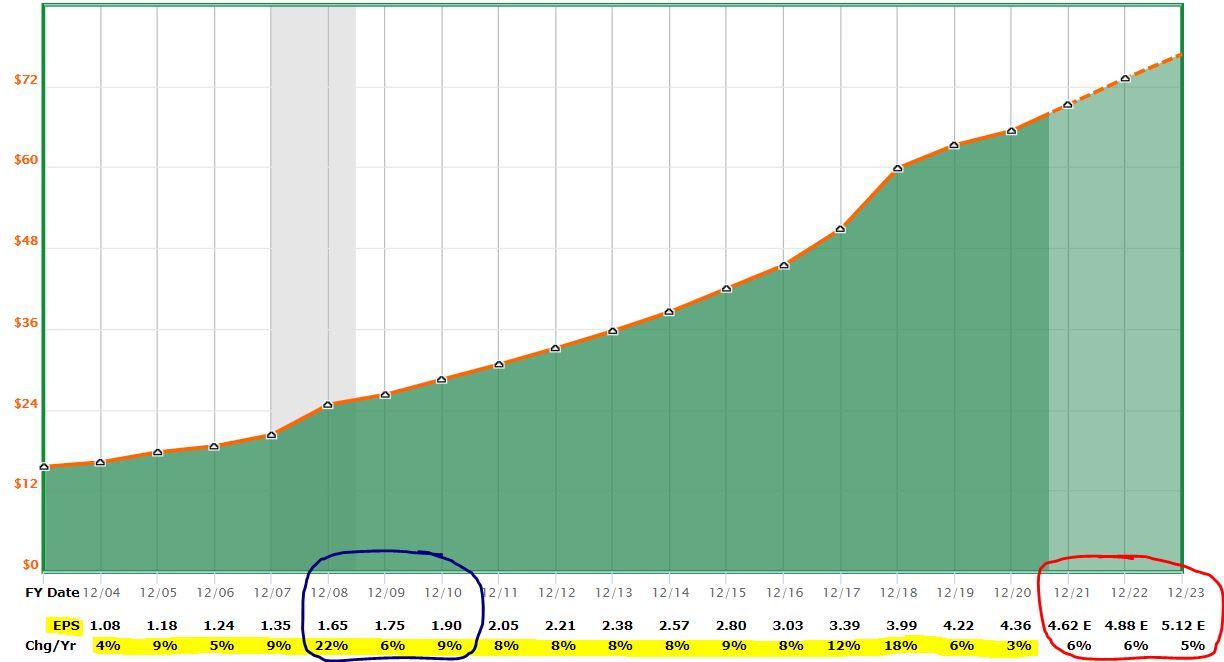 That’s yet another reason I feel good about finally adding more MO to the Income Builder Portfolio, despite the rocky road for the position so far.

I’ll present more information about Altria, Costco and Sherwin-Williams — including a valuation analysis — in my post-buy article, which is scheduled to be published on Tuesday, Aug. 31.