Just when it seemed the United States had become so divided that members of opposing political parties would rather stab themselves in their eyes with red-hot pokers than agree on anything ever again … the Senate passed a trillion-dollar infrastructure plan.

Nearly 40% of Republicans crossed the aisle, joining all 50 Democrats — an extremely rare, bipartisan show of support.

The bill is now in the House of Representatives, where in-fighting among Democrats threatens to delay or even derail it … although I believe the legislation eventually will pass because America so desperately needs to upgrade its roads, bridges, tunnels, waterways, broadband services, power grid, etc.; and because the plan would create hundreds of thousands of good-paying jobs.

With all that in mind, I gave myself a challenge as I prepared to make my next selection for our Income Builder Portfolio.

I told myself the choice should be:

Many candidates hit several of those notes but few nailed them all. I decided to go with one that did, a company that has been on my watch list for quite some time: truck-engine maker Cummins (CMI). 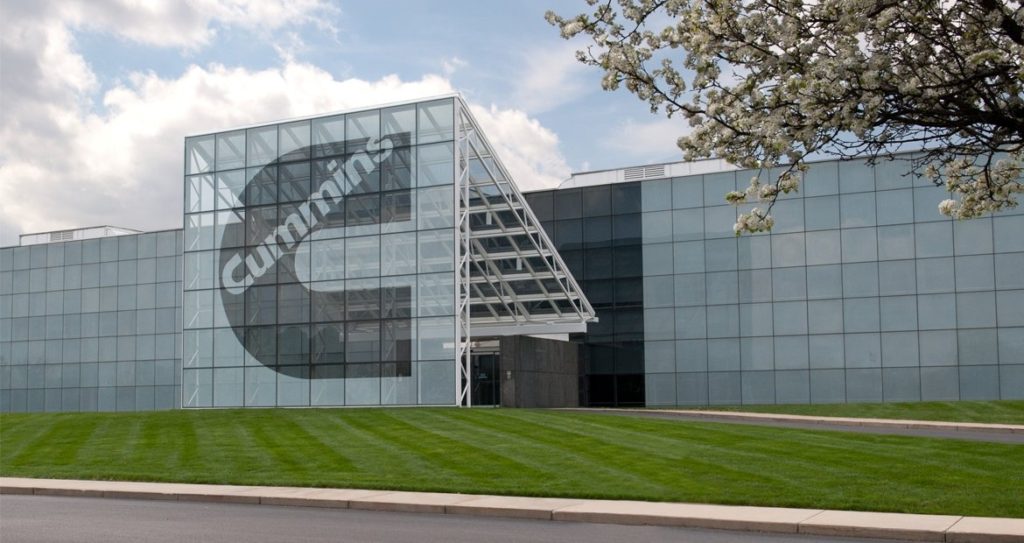 On Monday, Aug. 16, I will execute a purchase order on this site’s behalf for about $1,000 worth of CMI stock.

Cummins will become the IBP’s 44th holding — see the entire portfolio HERE — and sixth in the Industrial sector.

As I research candidates for the IBP (as well as for my personal portfolio), I like to focus on each company’s business model.

How does it make money, and is it likely to be able to keep doing so for years (or, better yet, for decades)?

We think Cummins will continue to be a leading supplier of truck engines and components, despite increasing emissions regulation from government authorities. For over a century, the company has been the pre-eminent manufacturer of diesel engines, which has led to its place as one of the best heavy- and medium-duty engine brands. Cummins’ strong brand is underpinned by its high-performing and extremely durable engines. Customers also value Cummins’ ability to enhance the value of their trucks, leading to product differentiation.

The company’s strategy focuses on delivering a comprehensive solution for original equipment manufacturers (OEMs). We believe Cummins will continue to gain market share, as it captures a larger share of vehicle content. This is largely due to growing emissions regulation, which allows Cummins to sell more of its emissions solutions, namely its aftertreatment systems that convert pollutants into harmless emissions. Additionally, Cummins stands to benefit from the electrification of powertrains in the industry. The company has made progress in the school and transit bus markets. Long term, we expect the truck market to also increase electrification. The pressure to manufacture more environmentally friendly products is forcing truck OEMs to evaluate whether it’s economically viable to continue producing their own engines and components or to partner with a market leader like Cummins. We’ve seen this play out recently, through the increase in partnership announcements for medium-duty engines with truck OEMs. We think some OEMs will opt to shift investment away from engine and component development, leaving it to Cummins.

Cummins has exposure to end markets that have attractive tailwinds. In trucking, we think new truck orders will be strong in the near term, largely due to strong demand for consumer goods. In good times, truck operators replace aging trucks and opt to expand their fleet to meet strong demand. Longer term, we think Cummins will continue to invest in BEVs and fuel cells to power future truck models. We believe a zero-emission world is inevitable, but we believe Cummins can use returns from its diesel business to drive investments.

That all seems like a pretty solid basis for an investment, and that last paragraph really highlights the “infrastructure theme” I was looking for this time.

Cummins has been around for more than 100 years, and its fingerprints are on just about every technology that has come to pass within its industry over the last century.

Each of its divisions performed superbly, with considerable growth in the New Power, Engine and Components segments. 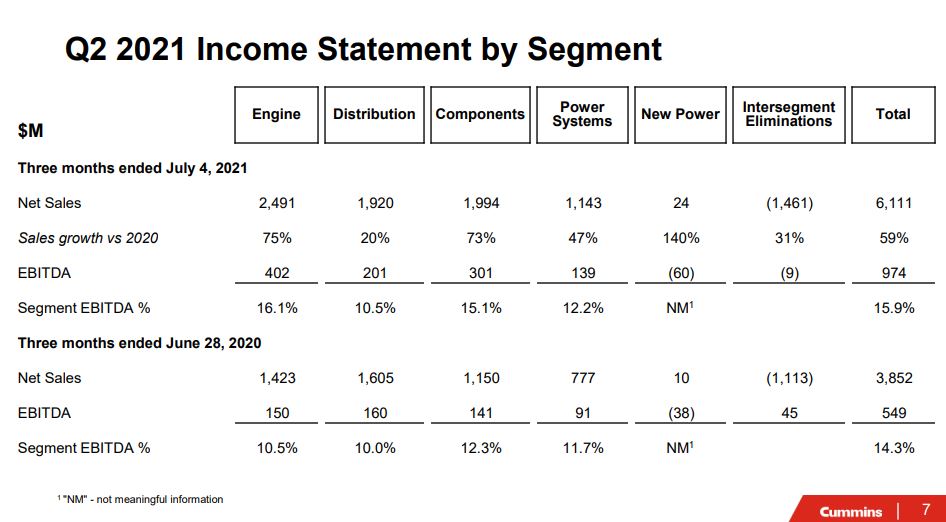 While a history of strong past performance is important, investing is always about the future.

Cummins re-affirmed its previously stated robust guidance for the full year in most categories, while substantially increasing its outlook for earnings from joint ventures (JVs, in the following graphic). 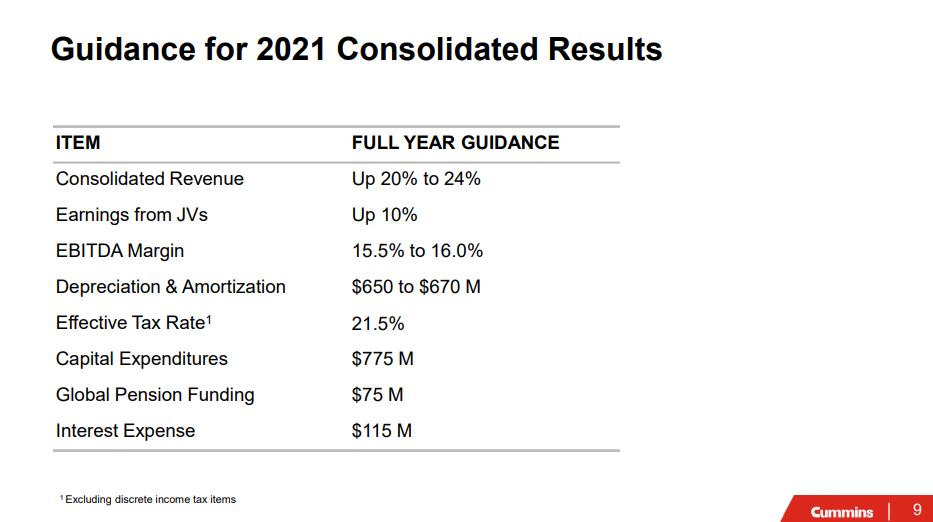 And according to Yahoo Finance, Cummins’ earnings per share are expected to increase about 18% annually over the next 5 years — that’s some serious growth.

Cummins certainly checks all the quality boxes, too.

Cummins commands strong brand loyalty among customers, despite fierce competition in the industry. The company’s strong reputation is built on its demonstrated history of consistently providing customers with durable and fuel-efficient products. Cummins’ strong product performance empowers customers to lower the total cost of their operations. This dynamic allows the company to thrive in a highly competitive industry, which in most cases calls for Cummins to compete directly with its own customers, truck manufacturers.

Value Line gives CMI solid scores of A+ for Financial Strength and 2 for Safety due to “strength across various markets,” including North America, China and India.

And thanks in great part to the company’s very low debt load, Standard & Poor’s assigns CMI an excellent A+ credit rating.

Cummins has been paying dividends for decades, and the firm has a stated goal of returning 75% of its operating cash flow to investors through dividends and stock buybacks.

It has grown its dividend for 15 straight years. CMI didn’t reduce its payout during the Great Recession, but its growth has slowed some in recent years after increasing by about 500% from 2010-16. 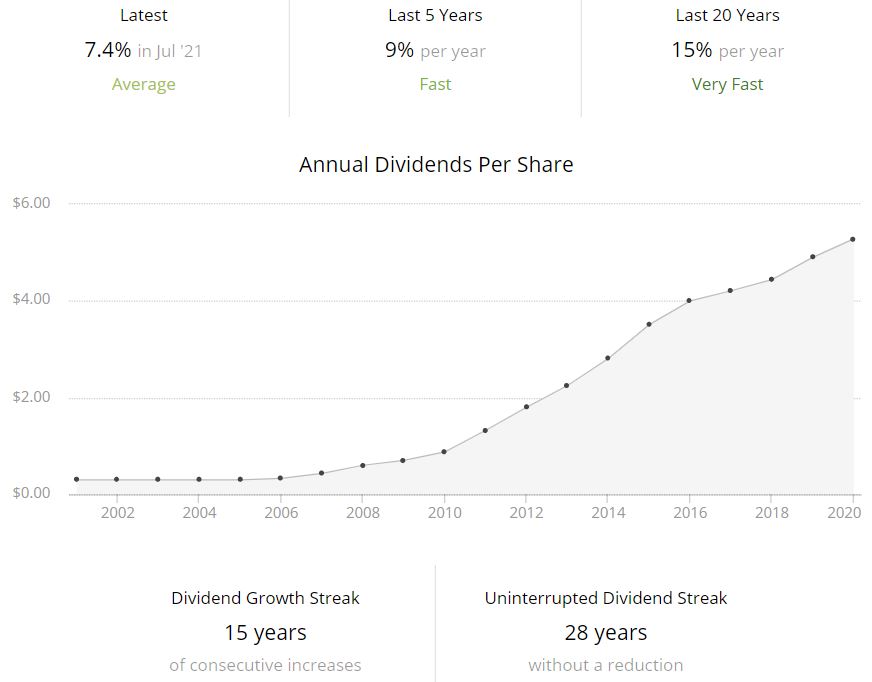 Cummins’ goes ex-dividend on Thursday, Aug. 19, so those who want to receive the next quarterly payment need to invest by Aug. 18.

Despite that fact — and despite presidents Trump, Obama and their predecessors prioritizing such policies during their terms — it’s been years since a president actually has been able to shepherd an infrastructure initiative through Congress. So if this becomes law, it will be a major victory for Joe Biden.

As an investor, however, I like to focus not on the politics but on how policy can affect my income stream and total return.

Cummins should profit nicely from infrastructure legislation, yes. But it’s also an outstanding business regardless of which way political winds might be blowing from one minute to the next, making CMI a fine long-term addition to the Income Builder Portfolio.

I will discuss Cummins’ valuation thoroughly in my post-buy article, which is scheduled for publication on Tuesday, Aug. 17.

Note: The July update for my “growth and income” Grand-Twins College Fund was published recently. For a link to that and other GTCF articles, and to see the entire portfolio, check out the GTCF home page HERE.