That applies big-time to financial matters — and this being an investing article on an investing site, I’ll get to that in a second.

It also applies to … well … relatives. For example, my twin grandsons Jack and Logan (aka “LoJack”) sure seemed little — until they got together with Cousin Owen for the first time.

Our family recently had our first full gathering of grandchildren in Seattle, with family members traveling from Chicago and Charlotte to get there.

While in Seattle, we celebrated Jack and Logan’s 2nd birthday (a few days early), with our “host” — 9-month-old Owen — also enjoying the revelry (and the cake).

Naturally, we gave toys and other gifts to LoJack, but our most important present was the one they’re still too young to understand.

As we’ve been doing monthly since mid-2020, we contributed about $100 in July to the Grand-Twins College Fund.

This “growth and income” portfolio is now worth nearly $3,500, having experienced 25% total return since its inception. 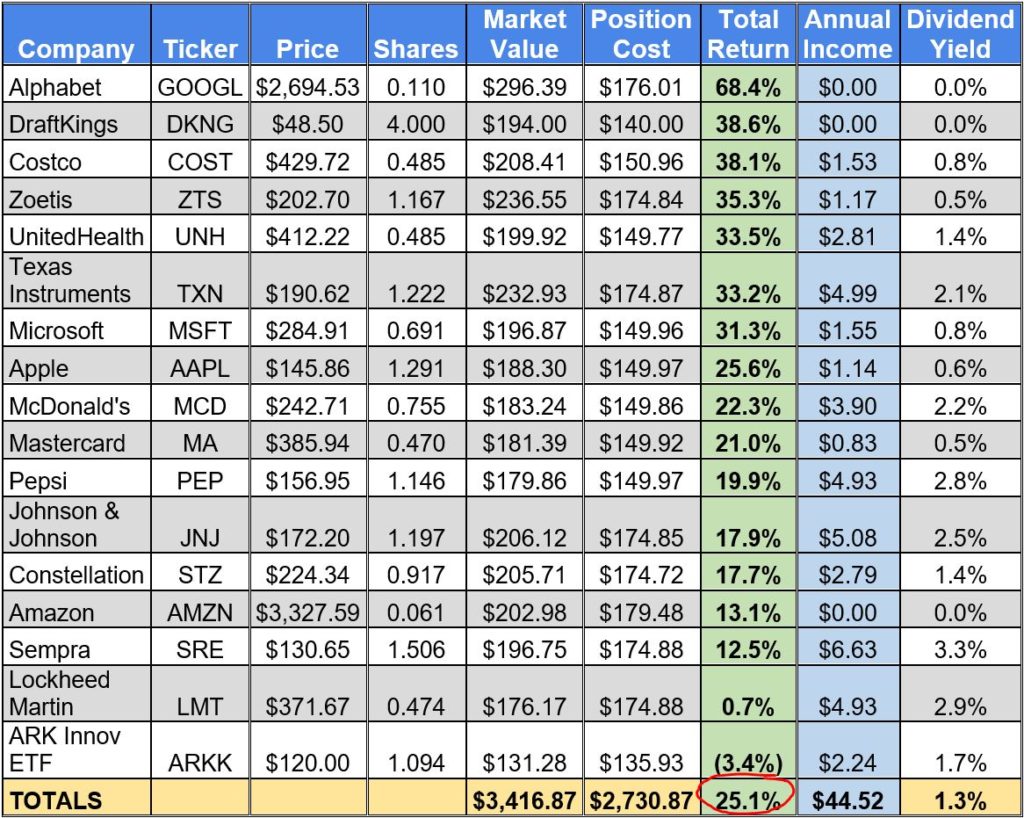 The above table, showing data through July 31 on all 16 stocks and one exchange-traded fund (ETF) in the portfolio, is updated frequently; it can be viewed on the GTCF home page HERE.

Two important points before we go any further: 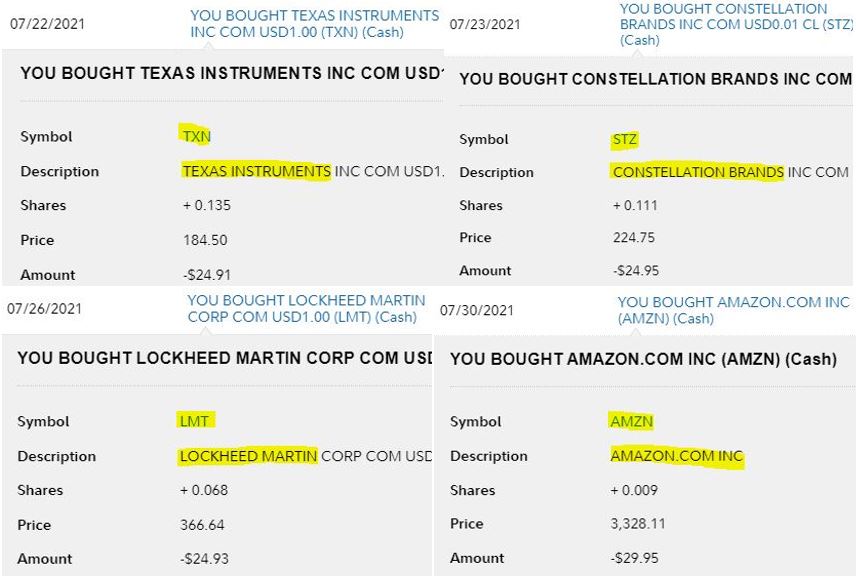 Using Fidelity’s “stocks by the slice” feature to buy fractional shares, my total buy was roughly $105.

When I made my earlier references to everything being relative, I was thinking mostly about Amazon.

It was among the first stocks I bought in launching this effort all the way back on June 12, 2020, and I have put more money into AMZN than any other GTCF holding (about $180).

Since that first buy, AMZN’s per-share price has gone from roughly $2,500 up to nearly $3,800, before pulling back to about $3,300 after its most recent earnings call. 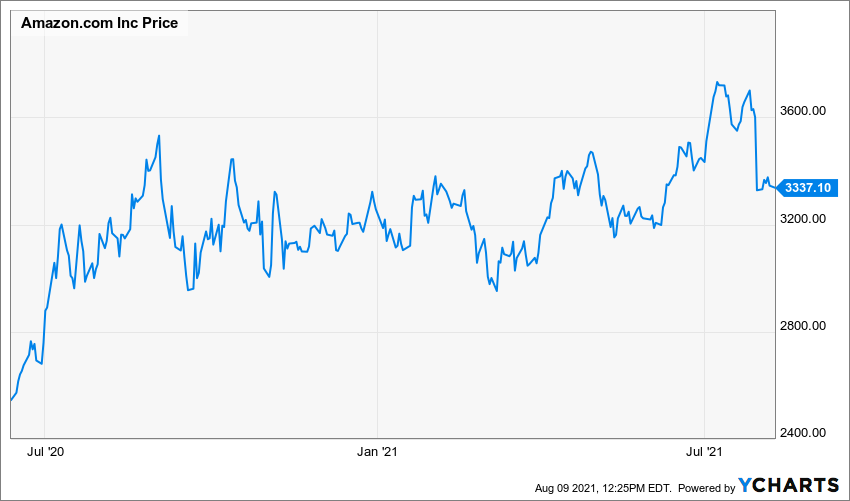 Amazon had a great second quarter, but it wasn’t quite as spectacular as some had expected. That triggered a mild sell-off — presenting a “discount” that, in turn, triggered my desire to buy more, both for the GTCF and my personal portfolio.

Although AMZN’s forward P/E ratio is approaching 60, it still looks like a decent deal to me — and I’m not the only one who feels that way.

As the above graphic shows, all 31 AMZN analysts surveyed by TipRanks thinks the stock is a buy, with an average upside of more than 26%. Even the lowest estimate from the group ($3,775) represents about a 13% upside.

Analyst calls always should be taken with a grain of salt, but 31-out-of-31 is a pretty strong statement.

A FAST Graphs image shows that while AMZN’s “blended P/E ratio” is a frothy-looking 69, that’s nothing compared to the 10-year norm of 206 (red-circled areas). Also, the end of the black price line sits well below the blue valuation line (purple arrow), suggesting significant undervaluation. 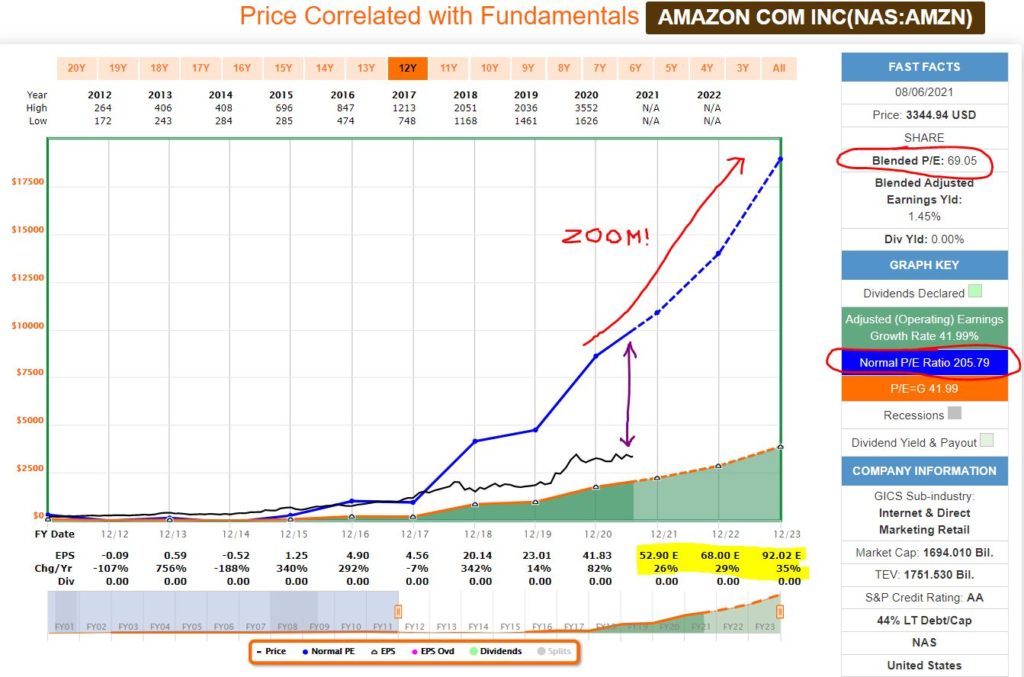 As the yellow highlighted area and the red “Zoom!” arrow in the above image suggest, Amazon is expected to keep growing its earnings by leaps and bounds.

No wonder Argus’ analysts offered this succinct assessment: “We believe that AMZN warrants long-term accumulation in most equity accounts.”

Even though I’m a Dividend Growth Investing guy at heart, it’s tough for me to argue with that. I happen to think that even DGI portfolios have room for a few outstanding, non-dividend-paying, growth stocks.

Despite its P/E ratio, Amazon might offer the best value of the four add-on buys I made for the GTCF in July.

Here is some specific analyst data regarding Amazon, Lockheed Martin, Constellation Brands and Texas Instruments, with the green-shaded areas being most attractive from a valuation standpoint and yellow being least appealing.

Lockheed Martin has looked like a compelling buy for many months, and Texas Instruments generally has appeared to be overpriced.

One thing that few can dispute: These are four high-quality corporations, with wide moats and strong balance sheets.

I’ve talked a lot so far about the one non-dividend payer in this group, but income does matter to me.

Lockheed Martin and Texas Instruments have enviable records of dividend growth, and they are two of the portfolio’s best income producers.

Along with Constellation, those three positions are projected to generate about $13 in dividends over the next year — 30% of the GTCF’s total.

That might not seem like much now, but by the time Jack and Logan are ready for college, dividends will have contributed nicely to this portfolio’s total return.

The following table, from Simply Safe Dividends, shows some interesting dividend-related information about the July buys:

The only dividend the GTCF received in July came from Sempra Energy (SRE), the portfolio’s highest yielder at 3.3%.

My wife and I had a great July, as we finally got to see Owen and LoJack play together, eat together, enjoy story-time together, giggle together, and even bathe together. 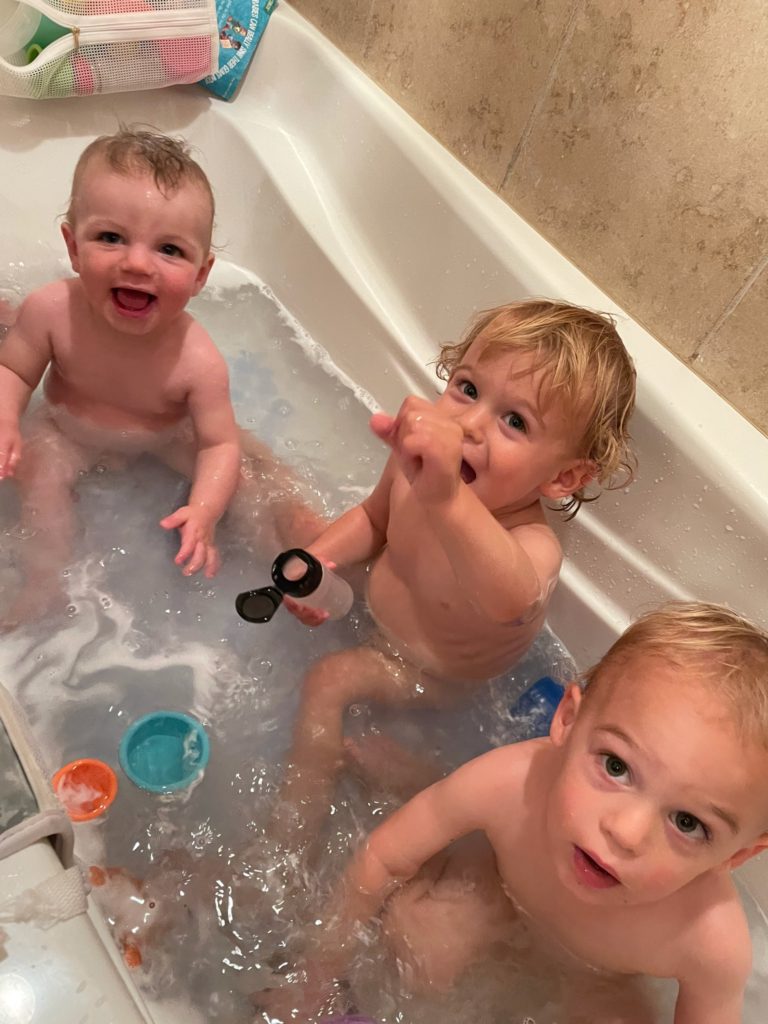 July was a pretty wonderful month for the Grand-Twins College Fund, too, as the dozen companies and one ETF in which there were no new investments combined for a 4.1% total return.

That was well higher than the 2.4% of the SPDR S&P 500 Trust ETF (SPY) during July — when 10 of the GTCF’s holdings outperformed that proxy for the overall market.

Yes, everything’s relative … and relatively speaking, the GTCF has been doing everything I had hoped for, and more.

Note: For those with a more income-centric interest, I also manage the Income Builder Portfolio for this site — see the home page HERE. I expect to make my next IBP stock selection this week for an article to be published on Saturday, Aug. 14. In the meantime, check out my video on YouTube’s Dividends and Income Channel for my most recent IBP pick — HERE.