When I did my 2020 review of our Income Builder Portfolio’s total return after Year 3, one name really stood out for me:

McCormick (MKC) … it’s such a seemingly “boring” company, one that makes spices for consumers, restaurants and other businesses.

How could it possibly have been the IBP’s second-best performer — even better than tech stalwarts Microsoft (MSFT) and Broadcom (AVGO)? How could McCormick’s total return have been almost double that of the S&P 500 Index since we added MKC to the portfolio on May 29, 2018?

Little did I realize then that MKC already was in the process of giving away its huge lead over the index. Less than 8 months after writing that 2020 review, the edge is down to a scant 1%. 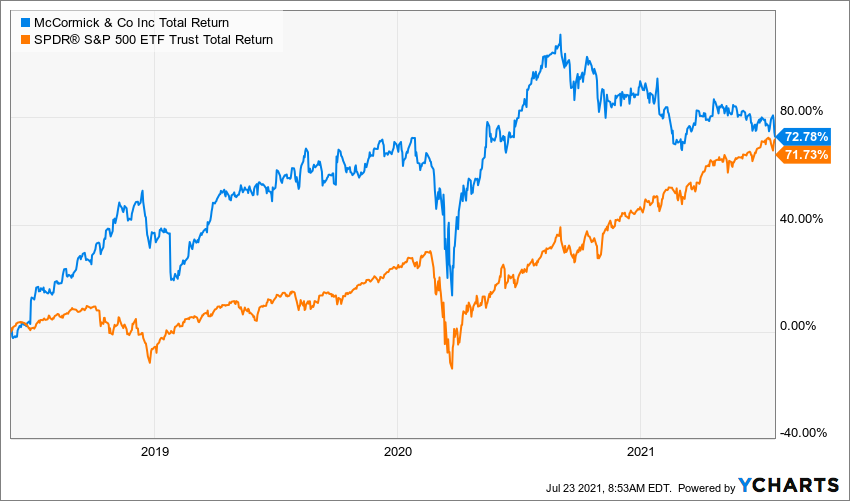 That doesn’t mean McCormick has become a bad company.

But to coin a term, its stock price just “got ahead of itself.”

McSpicy had become too pricey … leading to a 20% fall from its all-time high of last September. 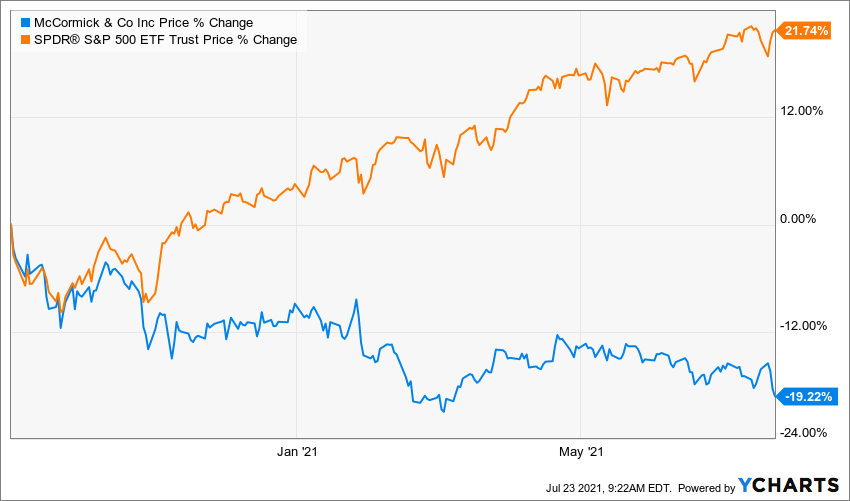 Way back in May 2018, McCormick became the Income Builder Portfolio’s 10th position.

Of the 43 stocks now in the IBP (see the entire portfolio HERE), MKC is the oldest position to which we haven’t added. In great part, that’s because it almost always seemed overvalued.

Now that it has returned to earth — or at least re-entered the atmosphere — I finally have decided to give McCormick another whirl. Come Monday, July 26, I will execute a purchase order for about $1,000 worth of the company’s stock on this site’s behalf.

A Little More About Valuation 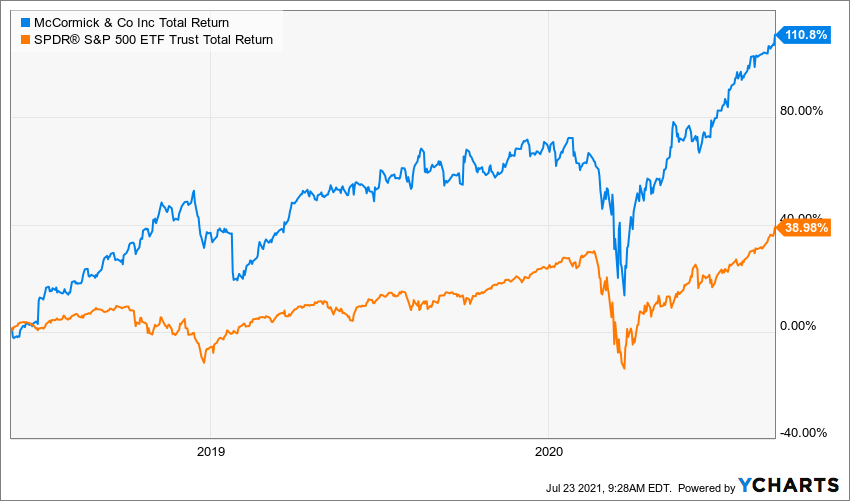 It was trading at 35 times projected 2020 earnings, which is pretty outlandish for a consumer staples company that is steady but hardly hyper-growing.

Something had to give.

Not only did MKC drastically underperform the overall market on a total return basis after that, it also has been crushed by the consumer staples peers it had been thrashing. 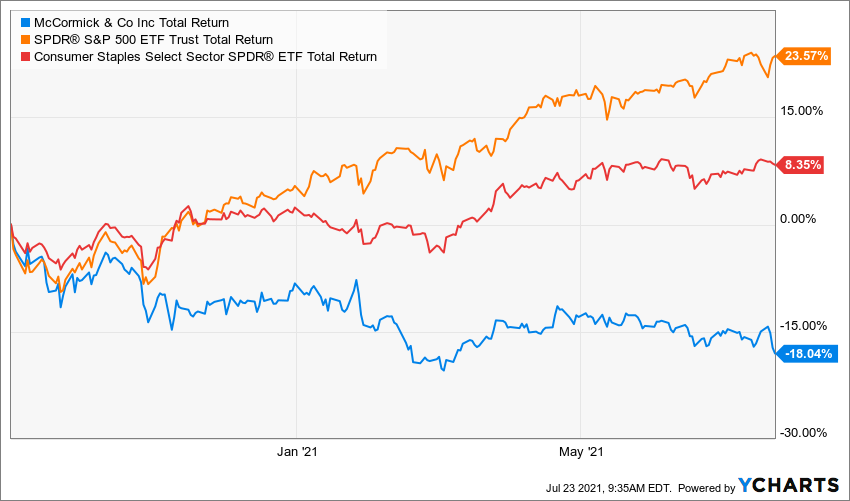 This can be one of the problems with momentum investing, with saying: “Valuation doesn’t matter! This rocket is going to another galaxy! BUY BUY BUY!”

McCormick wasn’t just a little pricey, it had become extremely overvalued. Its growth — both past and expected — was and is fine … but it’s nowhere near robust enough to justify a 35 P/E ratio.

Which brings us to the here and now. I will take a more detailed look at McCormick’s current valuation in my post-buy article, which is scheduled to be published on Tuesday, July 27.

For the rest of this piece, let’s talk about what’s been going on with McCormick in the 3+ years since we first bought it for the IBP.

The company’s financial picture is quite appealing. Earnings growth has slowed some, but the company is still raking in profits, and sales have been outstanding.

Operating margin continues to be impressive. 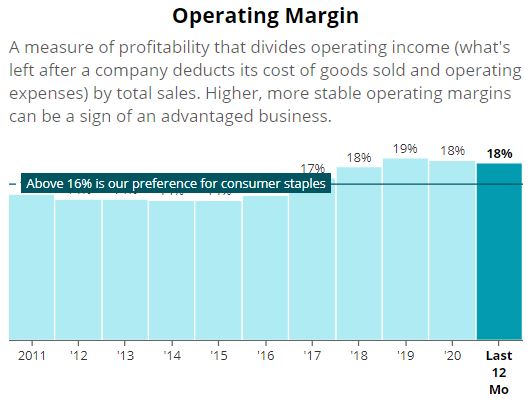 Debt, which had climbed after the $4.2 billion acquisition of Frank’s RedHot Sauce and French’s Mustard in 2017, gradually is being paid down despite the company continuing to make acquisitions.

In its most recent earnings report, July 1, it looked like McCormick had lost ground … but looks can be deceptive.

Because people were cooking at home during the height of the COVID-19 pandemic, McCormick’s business was booming during the second quarter of 2020. So naturally, year-over-year comps were off during Q2 2021.

The fervor surrounding the spices and seasonings in McCormick’s mix failed to wane in its fiscal second quarter, as organic sales edged up 3% (on top of 10% gains a year ago). However, there was significant bifurcation in the results, as the consumer segment (60% of sales) sank 7% on an organic basis in the quarter, given the heady 28% comps it was up against, while flavor solutions edged up at a 25% clip, though this was relative to a weak year-ago period during which sales slumped 16%. … While we don’t ascribe to the belief that consumers’ penchant for cooking at home will hold at such levels, particularly as vaccination rates increase and COVID-19 concerns abate, we think McCormick’s staunch dominance and investments in product innovation should ensure its offerings continue to win with consumers, restaurants, and packaged food operators as we emerge from the pandemic.

To sum that up briefly, consumer demand waned somewhat as more people ventured out to eat; and though McCormick’s sales to restaurants perked up, it wasn’t enough to offset the reduction in sales to consumers — which is 60% of the company’s business.

But I agree with Lash’s conclusion that McCormick will come out A-OK, something Value Line analyst William Ferguson reiterated:

Although there is no denying that McCormick, like most of its food processing peers, will probably witness a pullback in demand as more vaccinated people eat outside the home, we think the company will retain some of the customers gained during the early days of the pandemic. In fact, May-period sales for the Consumer segment fell only 2% after climbing 26% in the prior-year same period. The company also is seeing a jump is Flavor Solutions sales (up 39% year over year) to restaurants and other foodservice customers.

According to the company, both acquisitions already are making material contributions to MKC’s operations. 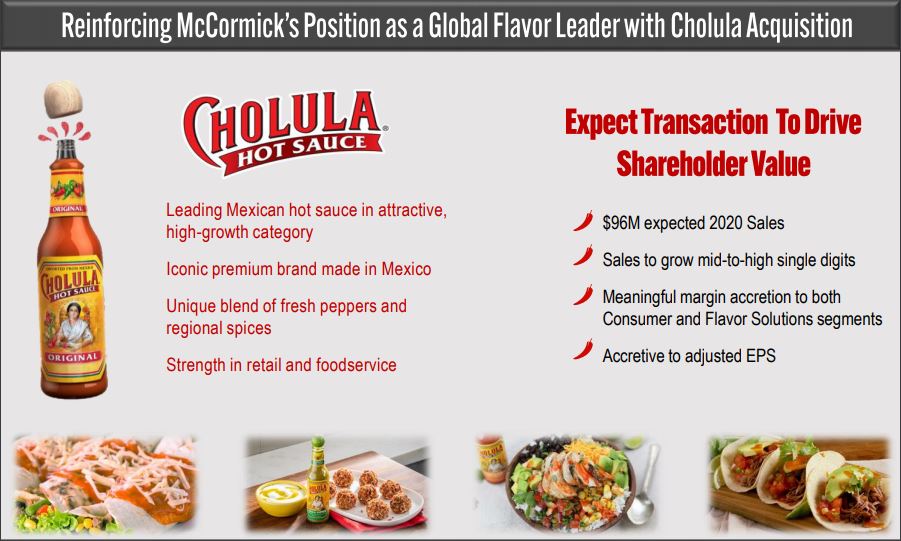 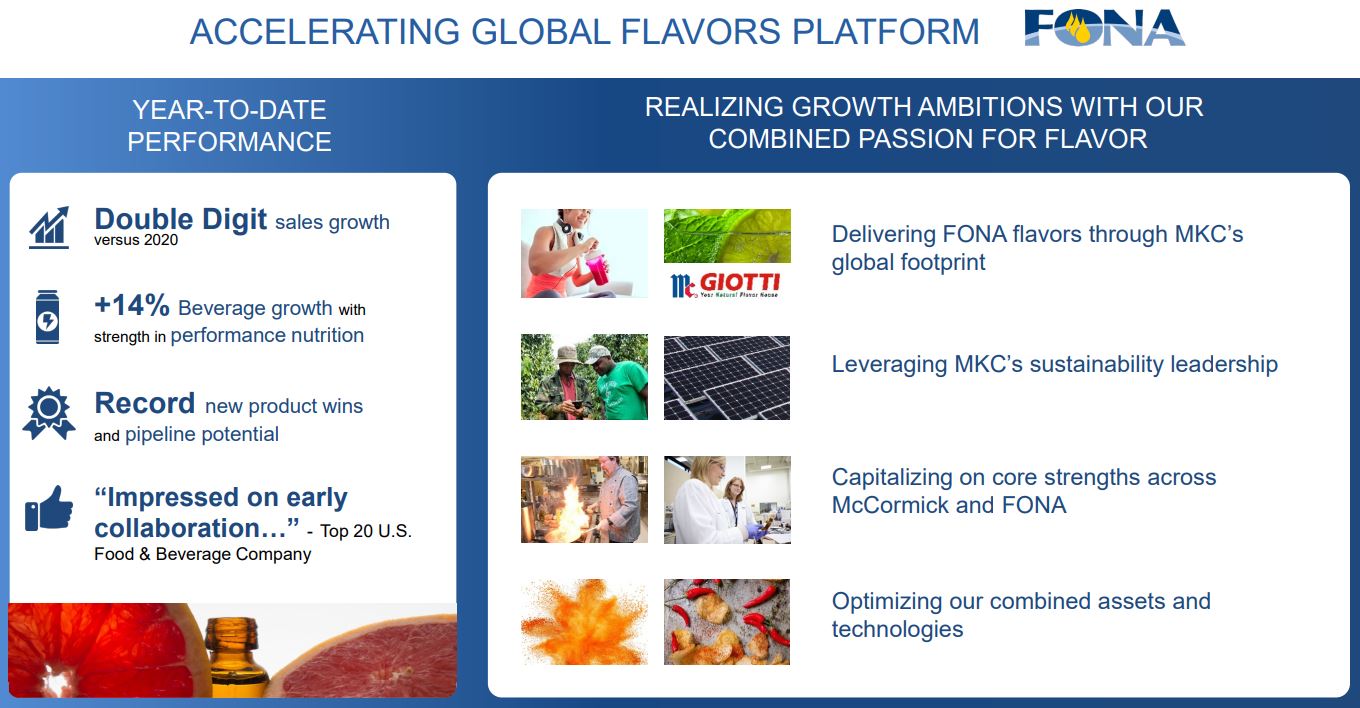 The newcomers add to what already was an impressive portfolio of products for McCormick, not just in the United States but also in the rest of its regions: the Americas, Europe-Middle East-Africa, and Asia-Pacific. 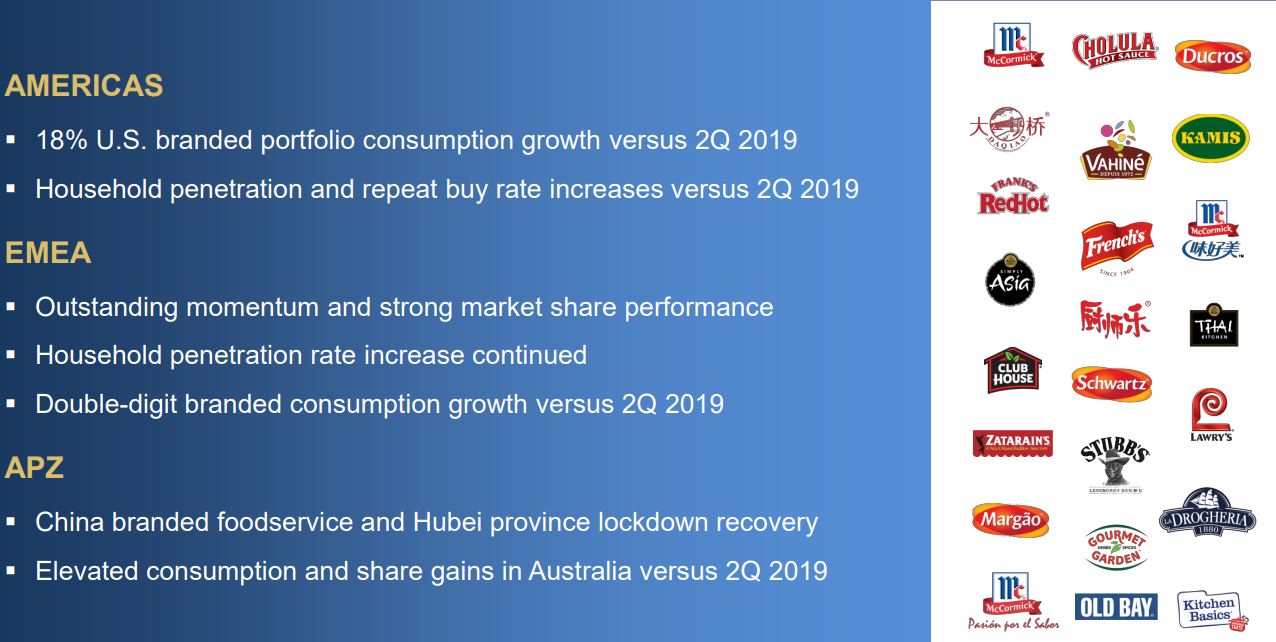 One relatively recent happening that shareholders welcomed was a 2-for-1 stock split in December.

Even though splits don’t really bring additional value to shareholders, they often result in gains because the share price is seen as more accessible for more investors. But not even the split could reverse the downward pressure on MKC shares due primarily to overvaluation.

Such steady, attractive dividend growth shouldn’t surprise anybody who has followed McCormick over the years.

A Dividend Aristocrat with a 34-year streak of increasing its payouts, MKC has averaged 10% annual dividend growth over the last two decades. 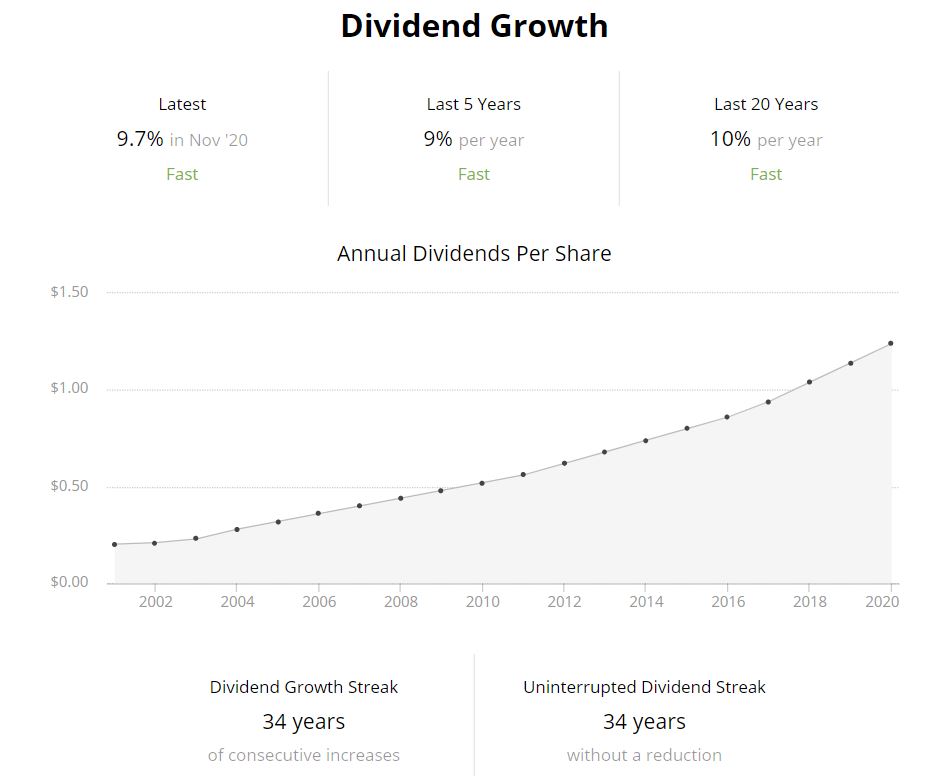 So even though the 1.6% yield is on the lowish side for some Dividend Growth Investing proponents, MKC nonetheless has found its way into many a DGI portfolio.

With such reliability, consistency and commitment to the dividend, it stands to reason that McCormick has received an 80 score (on a 1-to-100 scale) from Simply Safe Dividends — meaning that SSD’s research indicates the dividend is safe.

Put that together with Morningstar’s “Wide” moat rating, Value Line’s scores of 1 for Safety and A+ for Financial Strength, and Standard & Poor’s investment-grade BBB credit rating … and we’re talking about a high-quality operation that merits a larger presence in our Income Builder Portfolio.

Again, check back on Tuesday, July 27, for more about McCormick, including a thorough look at valuation.

Note: I also do YouTube videos about my IBP selections for our Dividends And Income Channel. The most recent video was about my previous pick, Wall Street investment bank Morgan Stanley (MS), which just raised its dividend 100%. Check it out HERE.