If you are a Dividend Growth Investing proponent who likes to hold your stocks for the long term, and if you are thinking about buying shares of a major U.S. bank, you probably should ask yourself some questions … such as:

I asked those questions of myself last week and I decided my portfolio and “investing personality” both could take it if the worst of the worst were to happen … so I bought stakes in a few banks.

And with that fresh on my mind, I also felt good about selecting Morgan Stanley (MS) for the Income Builder Portfolio.

On Monday, July 12, I executed a purchase order for 11 shares of the Wall Street investment bank on behalf of this site’s founder, Greg Patrick.

(As can happen with limit orders, the buy executed via two transactions a split-second apart.)

MS is the portfolio’s 43rd position — see all holdings, as well as links to every IBP-related article HERE.

It’s also the second bank, joining JPMorgan Chase (JPM); and MS is the 3rd company from the Financial sector, along with JPM and BlackRock (BLK).

Indeed, if you bought Morgan Stanley about 21 years ago (just before the dot-com bust) or 14 years ago (as the Great Recession dawned), you’d have underperformed the overall market quite significantly. (Shaded areas on the following charts show recessions.) 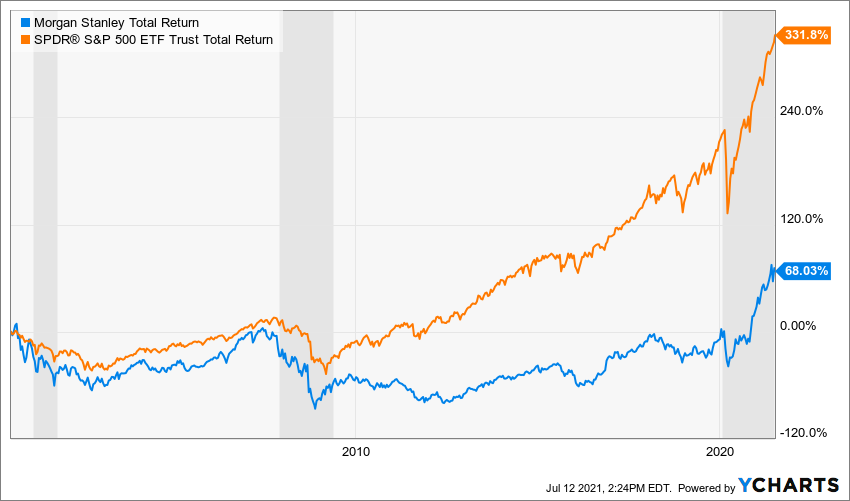 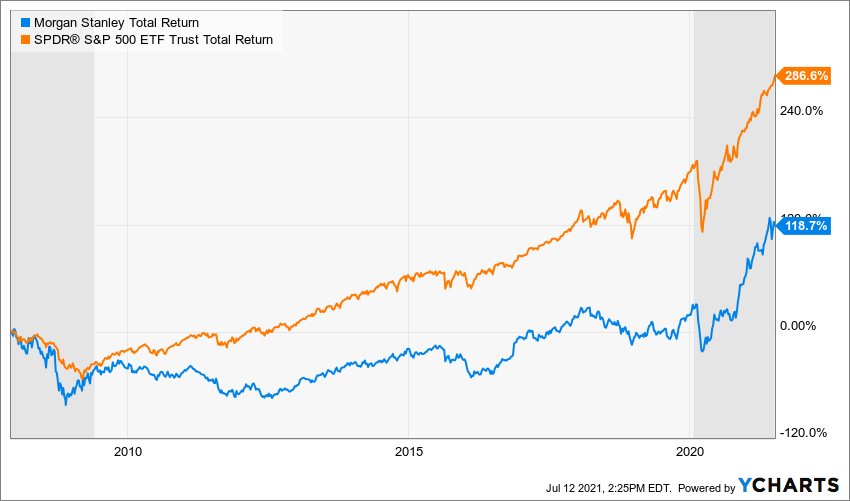 In good times, though, banks can do extremely well.

The following FAST Graphs image shows how Morgan Stanley — rockin’ a 21.6% average annual rate of return — has crushed the S&P 500 Index since 2012. 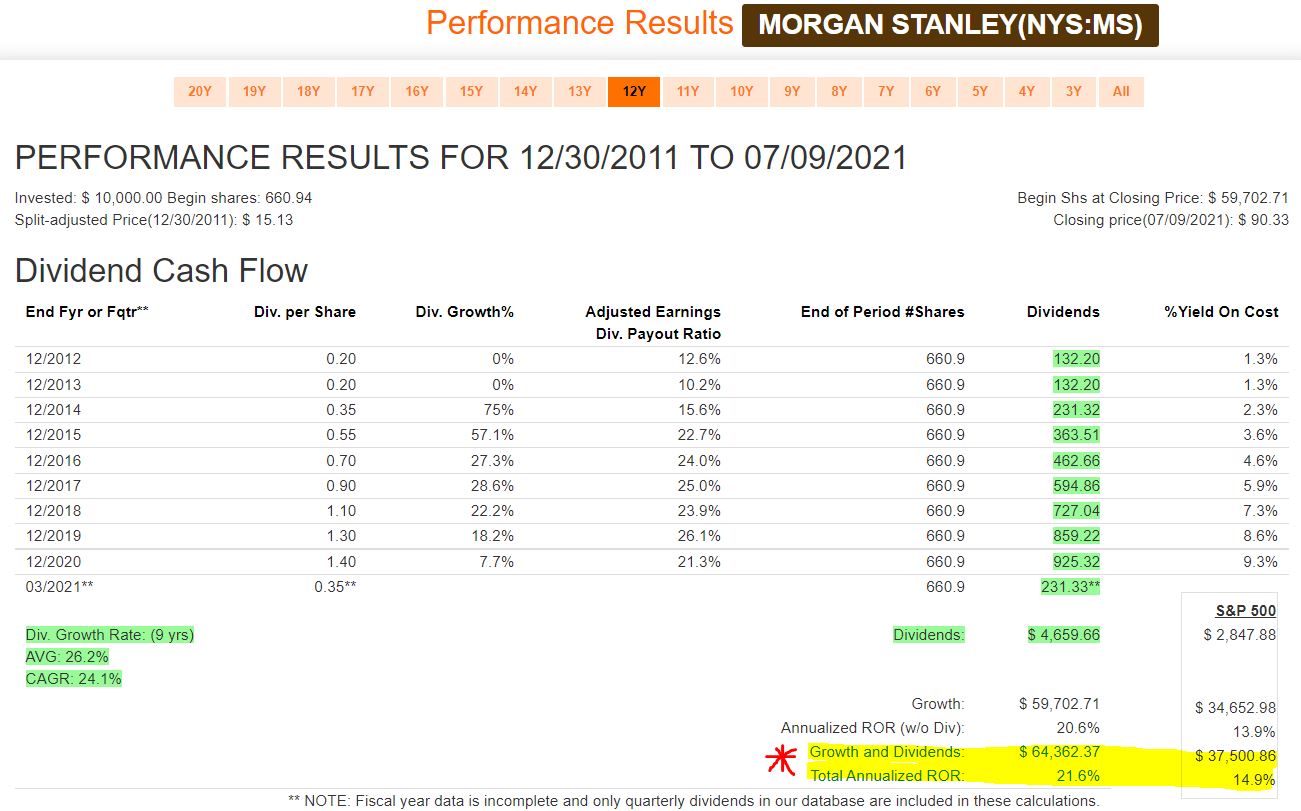 All recessions aren’t equal, either.

Since the start of the “pandemic plunge” in February 2020, MS has been a stellar performer — more than doubling the overall market’s return. 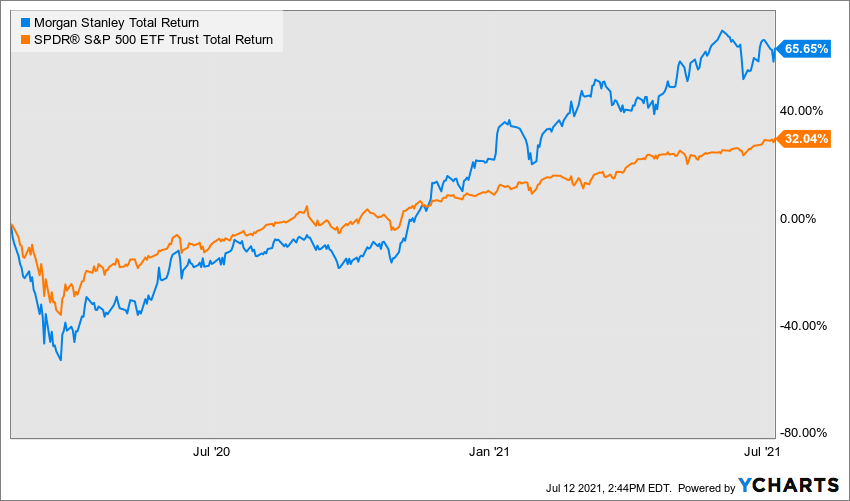 Because of those long stretches of outperformance, one can do pretty darn well holding bank stocks long-term.

For example, the following chart shows that if you had bought MS 25 years ago, held it through today and reinvested all dividends, the position would’ve experienced market-thrashing 1,200% total return — despite the three recessions that took place in the interim. 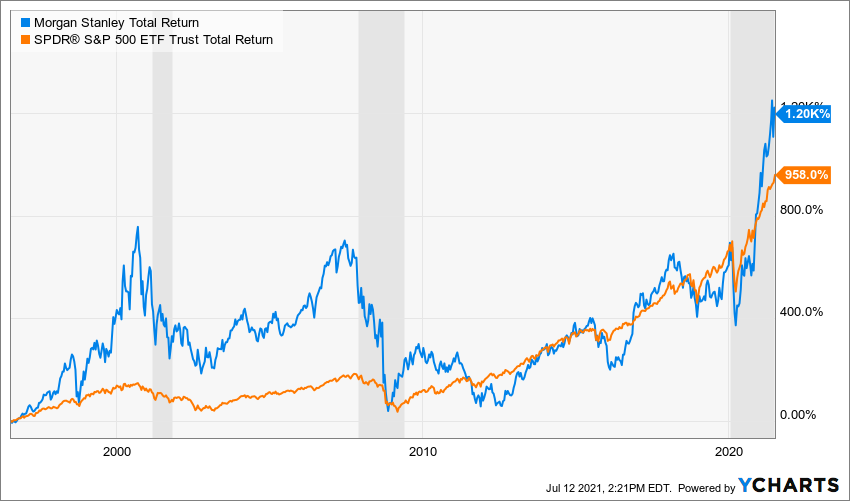 So those are all things to consider as you decide if Morgan Stanley — or any stock — is an interesting enough candidate for you to conduct your own thorough due diligence in advance of a possible purchase.

Another thing worth thinking about: Morgan Stanley just announced it would double its annual dividend from $1.40/share to $2.80, starting with this summer’s quarterly payout.

That’s right: a 100% raise, something I discussed at length in my previous article.

The following image, from Simply Safe Dividends, includes some dividend growth information pertaining to Morgan Stanley. Especially notable is the Annual Dividends Per Share chart, which shows how MS severely cut its distribution during the Great Recession but has grown it aggressively since 2013. 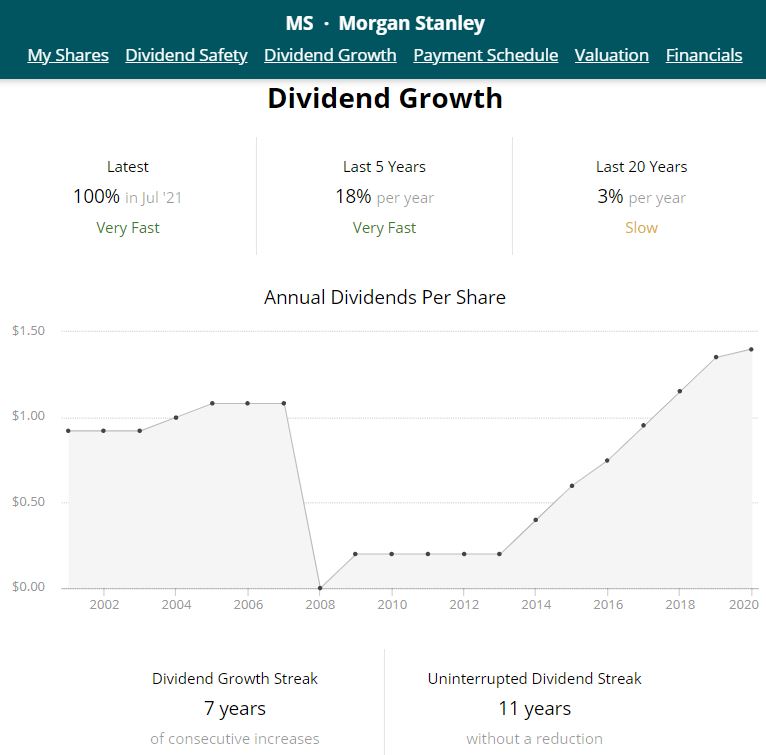 The IBP’s 11-share MS position will generate $30.80 in income over the next year — beginning with a $7.70 dividend to be paid in mid-August.

That will be reinvested, as per rules outlined in the IBP Business Plan, to buy another .08 of a share — a process known as “dripping.” Then, 3 months later, the new slightly larger share total will bring in a slightly larger dividend, which also will be dripped for slightly more MS.

And on and on that process will go, not only with MS but with each of the IBP’s 43 positions … which is why we gave this endeavor its oh-so-clever name.

Most pros who follow Morgan Stanley closely are bullish on the company.

Of the 16 MS analysts surveyed by TipRanks, 14 call the stock a “buy,” with an average 12-month target price that suggests an 11% upside.

Similarly, Reuters surveyed 27 analysts, and 18 gave MS either a “buy” or “outperform” recommendation.

Looking at a few individual analysts …

Here’s what CFRA’s Kenneth Leon had to say:

MS’s fundamental outlook remains strong, in our view, as a leader in the global capital markets. Compared to large banks, MS is likely to outperform, with a leading global franchise in investment banking that continues to gain wallet share. MS was ranked number two in global equity underwriting and IPO activity in Q1 2021, and these markets remain robust. MS will benefit from equity trading volumes and transaction fees that have risen significantly with greater investor participation in equity inflows and trading. Wealth and Investment Management bring stable, recurring fee revenue.

So I guess it should be no surprise that Leon calls MS a “strong buy,” with a target price that suggests a 13% upside.

Credit Suisse says MS will “outperform” over the next 12 months, with a target price of $102.

Value Line says Morgan Stanley is attractive both in the medium term (with an 18-month target price midpoint of $108) and long term (with a 3-5 year target range that tops out at about a 100% gain).

Value Line analyst Adam Platt said: “These timely shares are appealing. Even after the recent run-up in the stock’s price, this issue has above-average appreciation potential out to mid-decade.”

In fact, VL selected Morgan Stanley (as well as JPMorgan Chase) for its model portfolio of “Stocks for Income and Potential Price Appreciation.”

Morgan Stanley is due to present its Q2 earnings report on Thursday, July 15, and it’s important to note that analysts’ opinions in this section were based largely on the previous quarter’s data.

A few months ago, Morningstar lifted its fair value estimate for Morgan Stanley to $70 — a $5 raise it attributed mostly to the company having recently completed its acquisitions of E-Trade and Eaton Vance. 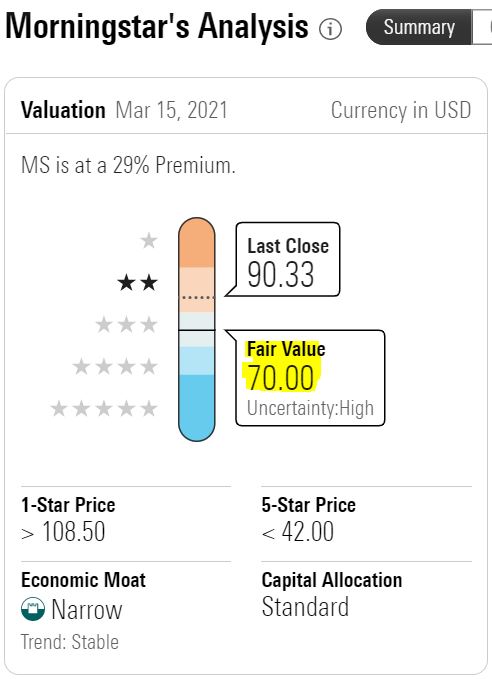 Since March 15, when Morningstar published that fair value increase, MS has gone from about $84/share to about $93 — a tidy 11% gain in 4 months’ time.

Morningstar is still going with a $70 fair value; it will be interesting to see if that gets adjusted after the next earnings call.

CFRA, meanwhile, considers MS to be quite undervalued, saying it’s worth about $102/share. 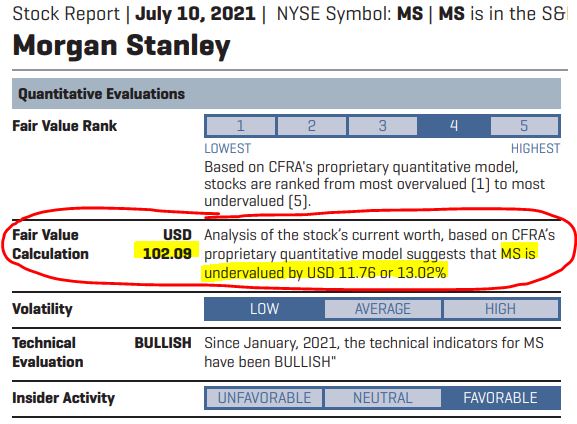 Simply Safe Dividends says that Morgan Stanley’s 3% yield (counting the imminent 100% raise) is substantially higher than its 5-year average of 2.5%. As a result, SSD says, the stock could be undervalued. 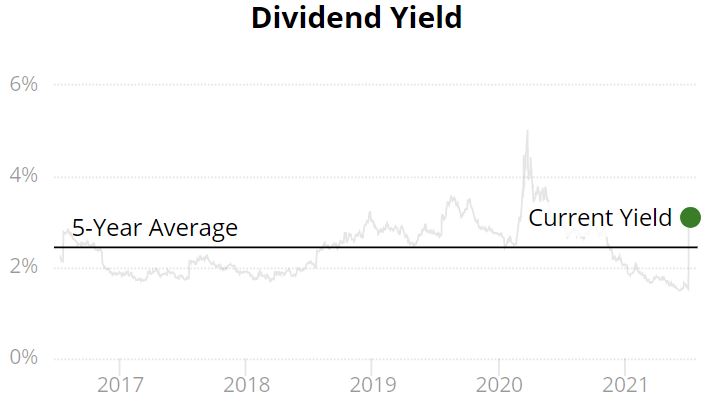 A look at a FAST Graphs illustration covering the last 20 years shows all the high peaks and deep valleys that have been part of the Morgan Stanley stock-owning experience. 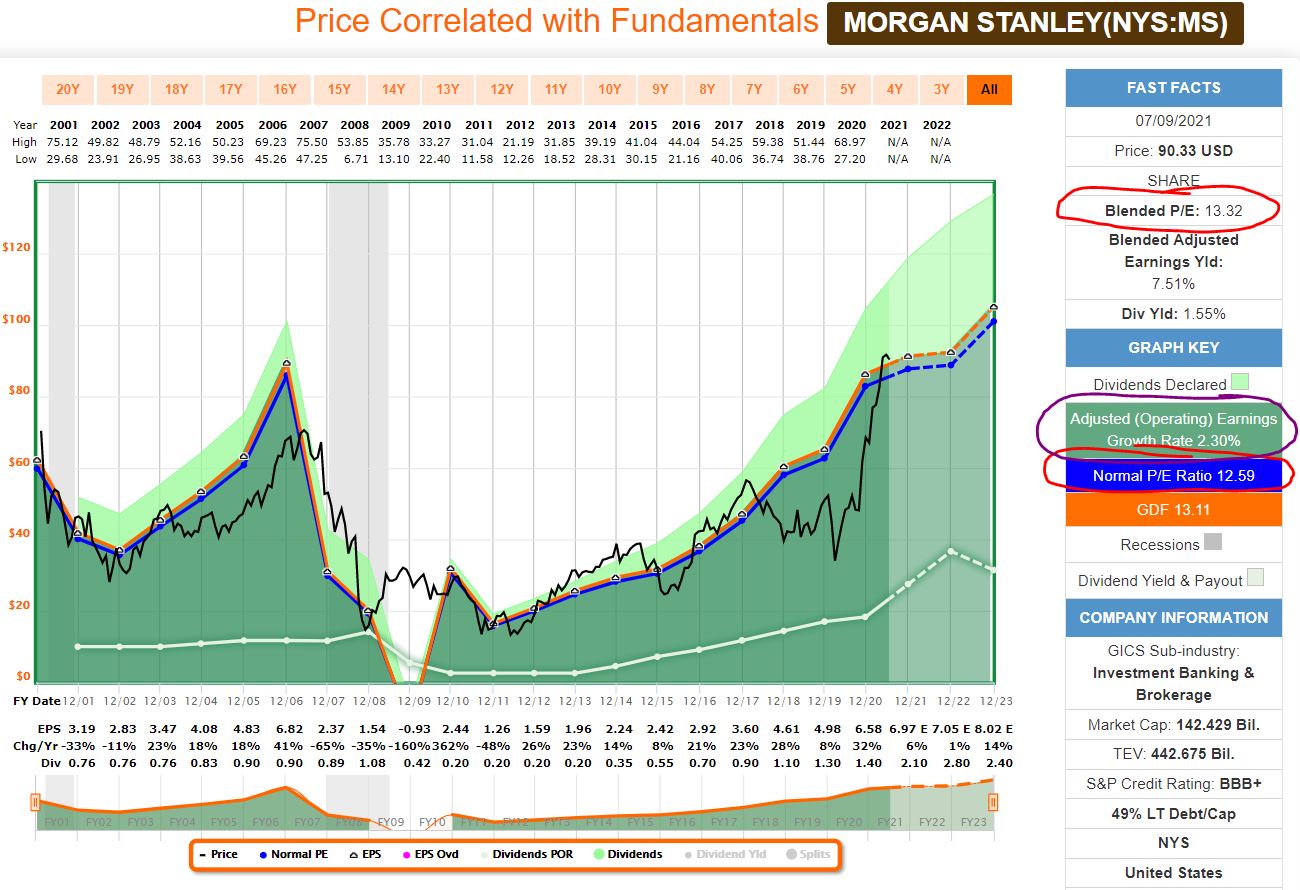 Things actually were pretty good except for the huge crater created by the Great Recession, when earnings and revenues tanked and the share price plunged some 75%. (Other than that, Mrs. Lincoln, how was the play?)

During the stretch, MS had anemic earnings growth of 2.3% (purple circled area) — roughly half that of JPMorgan.

The current “blended P/E ratio” of 13.32 is slightly higher than the long-term norm of 12.59 (red circles), suggesting slight overvaluation.

However, the decade-long view below puts MS in a far more favorable light. 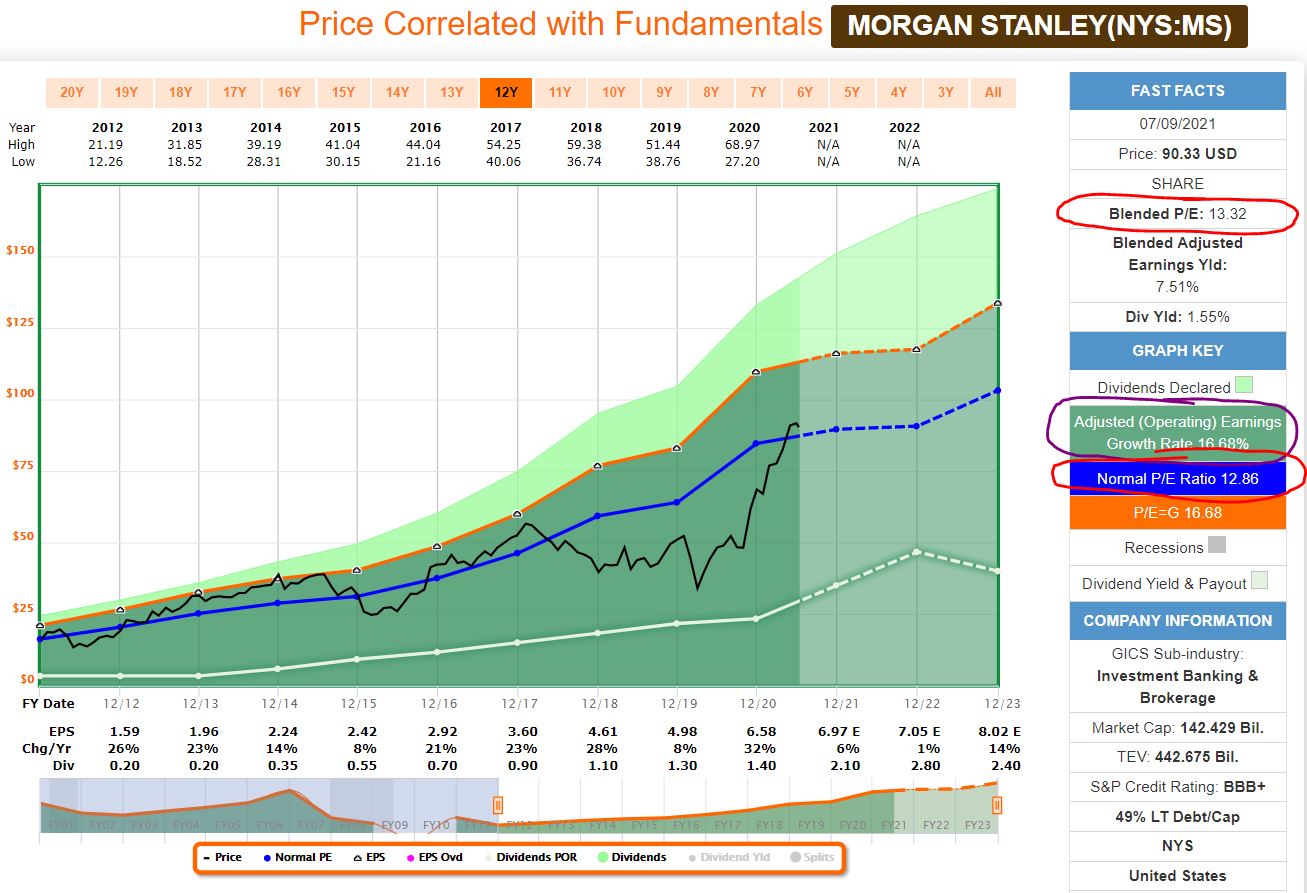 Again, MS will make its earnings call on July 15, and the data the company presents could affect some of the valuation information.

As I mentioned earlier, I recently bought some bank stocks for myself. Those included Morgan Stanley and JPMorgan Chase, as well as smaller positions in a few regional banks.

The next recession could be just around the corner … or it could be another decade away. Most likely, it will happen between those two extremes.

As a long-term investor with a diversified portfolio and a strong income stream, I am happy to own a few bank stocks. And I feel similarly comfortable about the Income Builder Portfolio’s relatively small exposure to the Financial sector.

Note: I recently discussed why I became a Dividend Growth investor in a video for YouTube’s Dividends And Income Channel. Check it out HERE.