Just about any increase looks good to dividend growth investors, and a double-digit hike is great.

OK, so what adjective should I use to describe a triple-digit raise?

Fantastic? Stupendous? Fabulous? Tremendous? Spectacular? Yep … all of those work.

Morgan Stanley (MS) inspired all of those words after announcing that it would double its dividend and, as a bonus, that it also would buy back billions of dollars worth of its stock over the next year.

And that news, in turn, helped inspire me to make the major Wall Street investment bank the 43rd position in our Income Builder Portfolio.

Come Monday, I will execute a purchase order on this site’s behalf for about $1,000 worth of Morgan Stanley stock.

Morgan Stanley will become the second bank in the IBP, joining JPMorgan Chase (JPM) — which also announced a dividend hike, although one of “only” 11%.

More About The Dividend

MS, JPM and some other financial institutions raised their dividends after they had passed the Federal Reserve’s “stress test” — indicating that the banks were well above the minimum capital levels required to get them through a hypothetical severe downturn.

Morgan Stanley had kept its quarterly payout “frozen” at 35 cents a share when it, like the other banks, had been told by the Fed not to raise dividends in the economically challenging aftermath of the COVID-19 pandemic.

In doubling its dividend to .70/quarter, or $2.80 on an annual basis, Morgan Stanley also doubled its yield to an appealing 3.1%.

Like many of its rivals, MS had been forced to cut its distribution during the Great Recession, and it wasn’t until 2014 that the dividend started growing again.

Even though the payout had been the same for 8 consecutive quarters, MS still will have extended its streak of annual increases to 8 years due to the timing of the dividends.

The dividend isn’t the only thing that’s been growing for Morgan Stanley.

Last October, the company closed its $13 billion acquisition of E-Trade, bringing aboard the online broker’s more than 5 million customer accounts (with about $360 billion in assets) and giving Morgan Stanley access to E-Trade’s $56 billion in deposits.

Said CNBC: “In the past, the bank has struggled to raise deposits to fund loans to its wealthy clientele. … (The additional deposits) will lower its funding costs by about $150 million, on top of the $400 million in other savings Morgan Stanley says the deal will bring.”

Then, earlier this year, Morgan Stanley completed its $7 billion acquisition of Eaton Vance. That has helped MS significantly boost its assets under management, with CEO James Gorman saying:

This acquisition further advances our strategic transformation by continuing to add more fee-based revenues to complement our world-class, integrated investment bank. With the addition of Eaton Vance, Morgan Stanley will oversee $5.4 trillion of client assets across its Wealth Management and Investment Management segments.

The following slide from its Jan. 20 presentation illustrated Morgan Stanley’s growth the last several years, and also what it was getting from E-Trade and Eaton Vance. 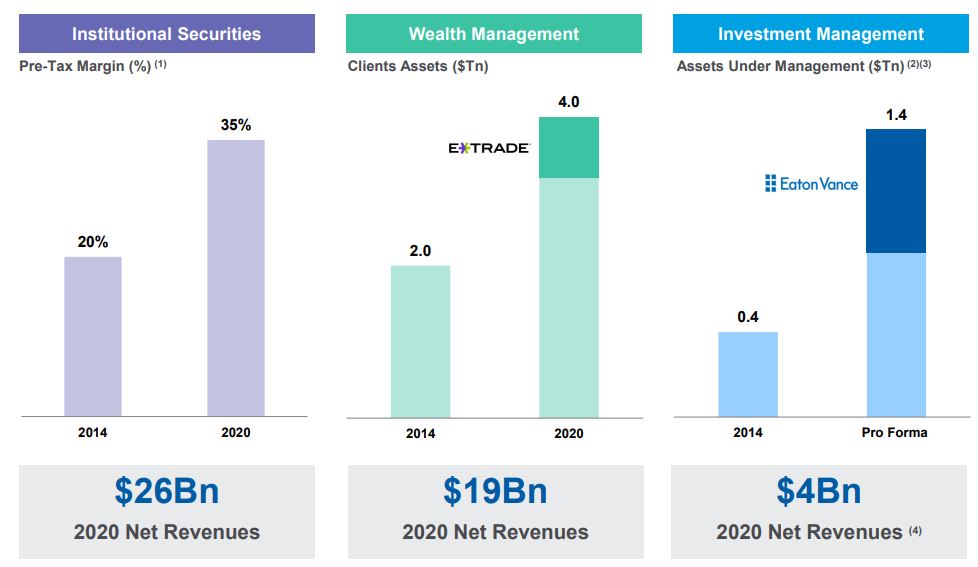 I normally try to avoid buying a company shortly before earnings announcements because I hate unpleasant surprises, but I feel reasonably confident that MS will have mostly good news.

Like all of the big banks, Morgan Stanley’s earnings and revenue were hit hard by the Great Recession. 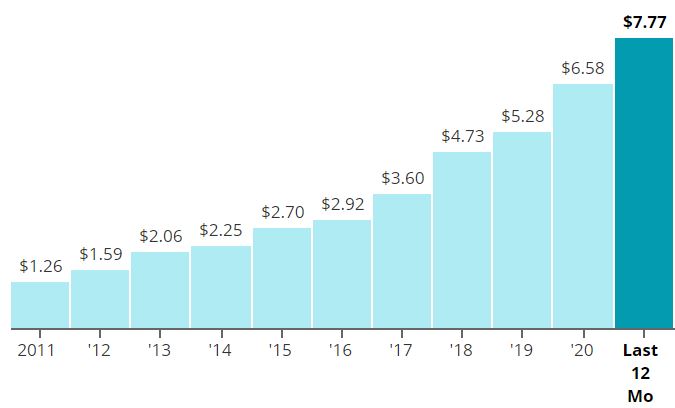 Sales have increased significantly, too. (Data below in billions of dollars.) 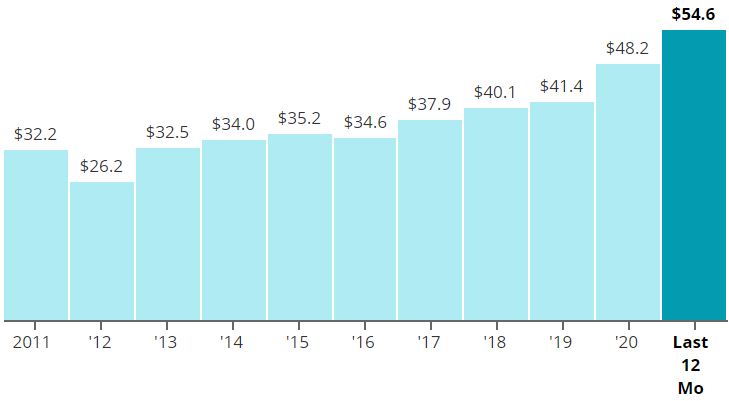 Morningstar says Morgan Stanley has a “narrow” moat; that might not sound impressive, but it is Morningstar’s second-highest rating:

(Morgan Stanley’s) status as one of the largest financial institutions by both headcount and global reach means that the company has a competitive advantage derived from the personal networks of its employees and financial product distribution channels to garner transaction mandates. The company’s reputation, developed over the decades, for pricing transactions in a way that benefits both sellers and buyers puts it in a strong position when management teams are contemplating an investment banking deal. Morgan Stanley is consistently ranked in the top 5, and often the top 3, among global investment banks for revenue. Its relatively high revenue production per employee is evidence that its brand makes the company an employer of choice when financial talent is seeking a new home.

Morningstar went on to say that Morgan Stanley’s “balance sheet is sound, its capital investment decisions are fair to exceptional, and its capital return strategy is appropriate.”

Value Line gives Morgan Stanley a 2 for “safety,” its second-highest level, but a middle-of-the-road B++ grade for financial strength.

MS gets solid, investment-grade scores from each of the credit-rating agencies. 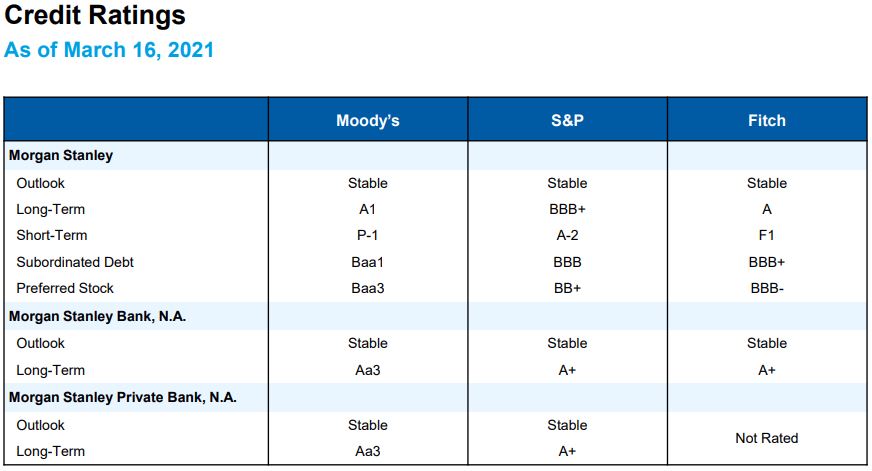 With a P/E ratio of about 11.5, is Morgan Stanley a “good buy”? I’ll give a thorough assessment of the stock’s valuation in my post-buy article, which is scheduled to be published on Tuesday, July 13.

Note: Why did I choose Dividend Growth Investing as my primary strategy? I discuss the many reasons in my latest video on YouTube’s Dividends And Income Channel. Watch it HERE.