You have limited funds available to invest, and you have a long-term goal … but the stock market keeps hitting all-time highs.

What do you do?

Well, here’s what I do in that situation: I keep investing.

Indeed, I’m doing just that with my Grand-Twins College Fund, the “growth and income” portfolio I have been contributing to for 13 months on behalf of my grandkids, Logan and Jack. 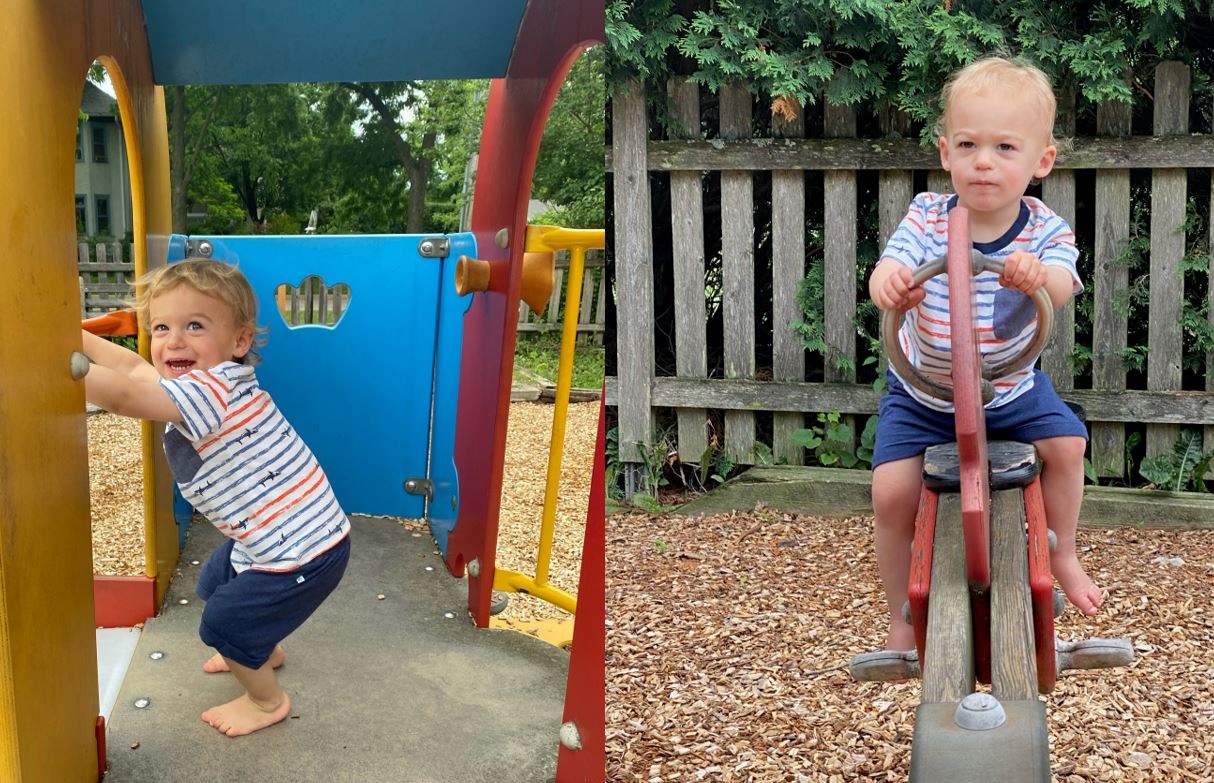 The boys, who will turn 2 in August, are in playful moods during most of their waking hours … but I’m not playing around with the GTCF.

Every month, whether the market is moving up or down or sideways, I’m buying about $100 in stocks to help out with “LoJack’s” eventual college costs — so we’re talking about a very long time horizon.

If I had waited until a market crash or correction to get started, the GTCF probably wouldn’t even exist yet.

Some pretty smart people — such as renowned investor Peter Lynch — would argue it’s foolish to try to time the market.

So onward and upward I went in June with the Grand-Twins College Fund, as I put about $25 each into Alphabet (GOOGL), Johnson & Johnson (JNJ), Sempra Energy (SRE) and Zoetis (ZTS). 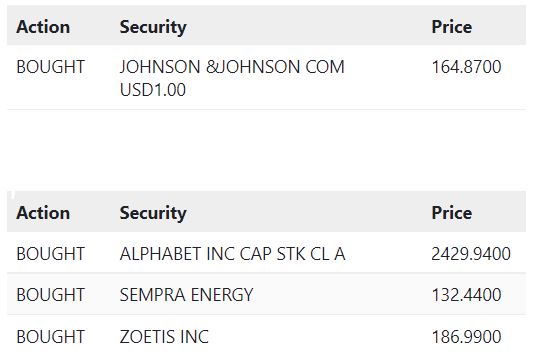 Those were add-ons to positions that already existed within the GTCF, which includes 16 equities and one exchange-traded fund (ETF).

Having said all that … I do recognize that many of you might be investing considerably larger chunks of change, and to you valuation is very important. So I will be discussing how “buyable” GOOGL, JNJ, SRE and ZTS are later in this article.

First, let’s take a look at the entire portfolio (all data through market close June 30, 2021): 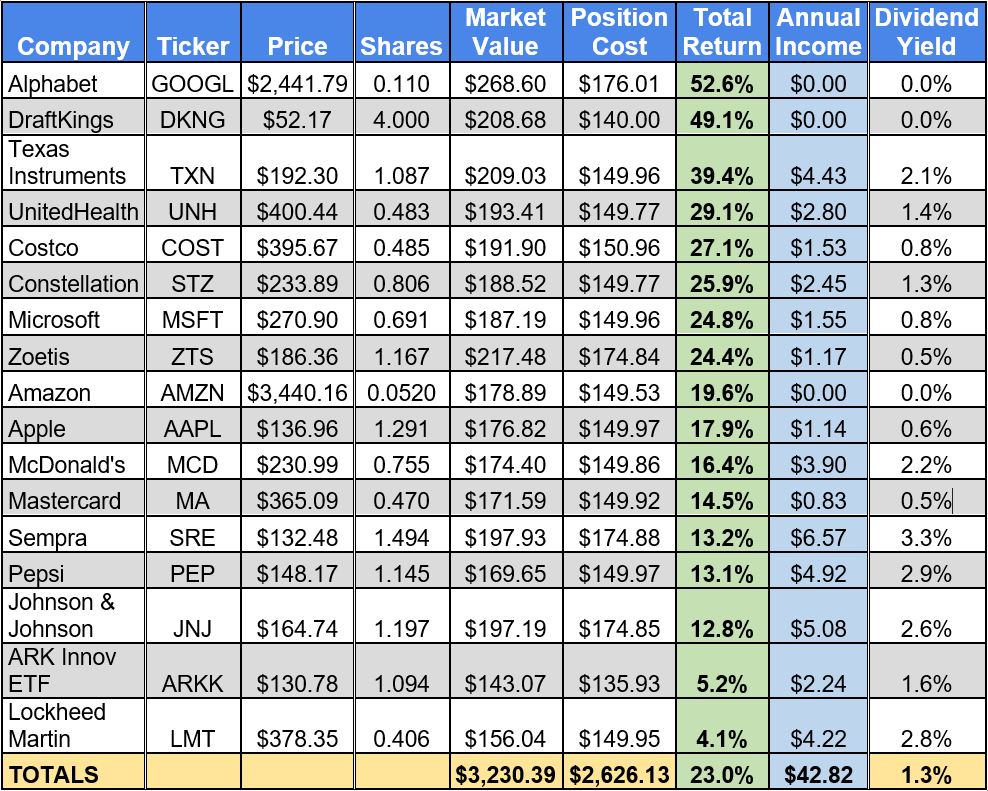 That table is updated regularly and can be seen, along with links to every article related to the portfolio, on the GTCF home page HERE.

All 17 GTCF positions are in the black, and 8 are showing gains of better than 20% — which explains the outstanding overall total return of 23%.

And while the market had yet another winning month, with the S&P 500 Index gaining 2.2% to finish the first half of 2021 at an all-time high, the GTCF was even hotter in June.

As the above table shows, the 13 positions in which there were no new investments last month (other than dividend reinvestment) combined for a 3.4% total return.

The surge was led by ARK Innovation ETF (ARKK), which has had an “interesting” start to the year. 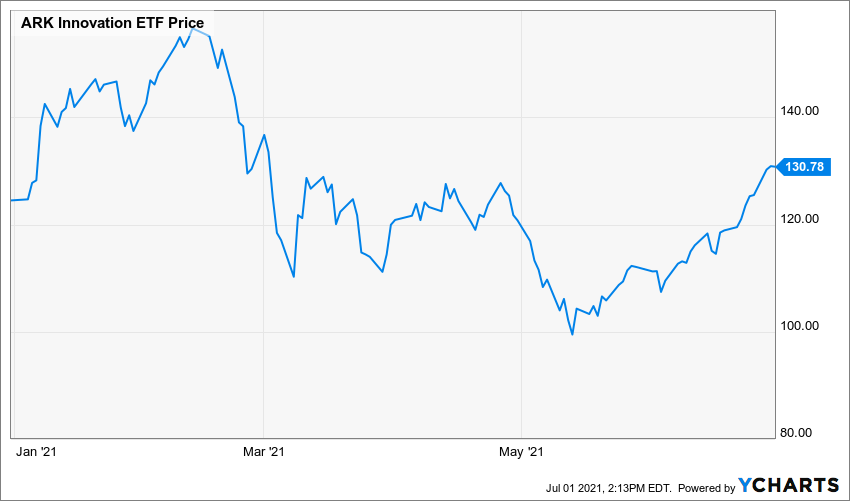 ARKK invests mostly in “disruptive technology” companies such as Tesla (TSLA), Roku (ROKU) and Teledoc (TDOC), so I knew when I bought it on Dec. 31 that it would be an extremely volatile holding.

Although the Grand-Twins College Fund emphasizes growth due to the long-term nature of the endeavor, I still appreciate companies that contribute to a growing, reliable income stream.

Seven GTCF holdings paid dividends in June, and the $5.55 they generated was used to buy fractions of additional shares in each position. 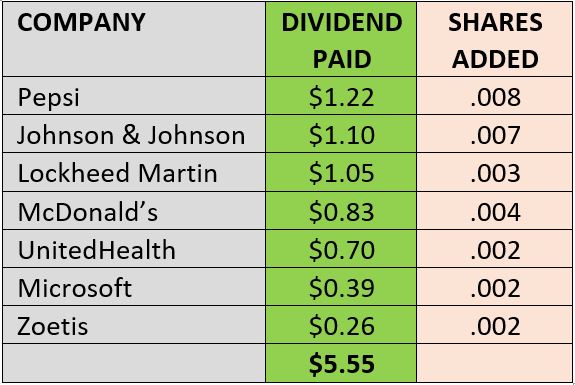 Though $5.55 won’t buy a tall, non-fat latte with caramel drizzle at your favorite coffeehouse, it nonetheless represents the GTCF’s best month yet for regular dividends received — and it’s 15% more than the same 7 positions produced in March.

The only GTCF component to announce a dividend increase in June was UnitedHealth Group (UNH), which served up a tasty 16% raise.

Alphabet, Johnson & Johnson, Sempra and Zoetis are four high-quality companies, with GOOGL and JNJ especially standing out in the ratings.

JNJ is one of only two companies to receive Standard & Poor’s AAA credit rating (Microsoft is the other), and GOOGL is just one rung lower.

Zoetis, a leader in developing animal health medicines and diagnostic products, might rank a tick below others in a few of the ratings in that chart, but its balance sheet and fundamentals scream “Quality!” 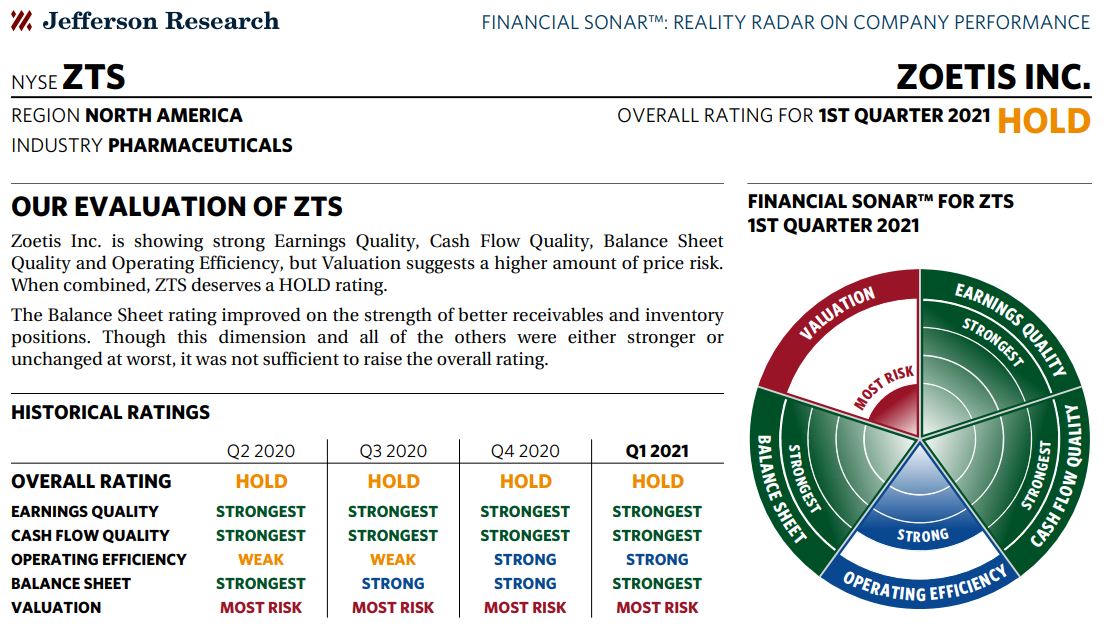 As you can see in the above graphic, high valuation is the only knock against Zoetis, which leads us nicely to the next section …

Even though Alphabet has been the portfolio’s best performer and has been on a market-crushing tear for some time, analysts still believe GOOGL has plenty of room to run.

Of the 29 analysts tracked by TipRanks who follow the company, 27 call it a “buy” — and the average 12-month target price represents nearly a 15% upside.

For that matter, the four companies I just bought for the GTCF combine to have 45 “buy” and 8 “hold” ratings on TipRanks. And of the 106 analysts who track GOOGL, JNJ, SRE and ZTS for Thomson Reuters, 86 call the four stocks either a “strong buy” or “buy.” There is not one single “sell” rating, either.

Here’s a look at what various analysts have to say about the companies’ valuations:

The only thing I like more than high-quality, deep-moat companies is when those companies are fairly valued or undervalued.

I believe that applies to Alphabet and Johnson & Johnson, and I have added to my stakes in both recently in my personal portfolio — where I invest significantly more than I do in the GTCF.

Sempra, a California-based utility that also serves Texas and Mexico, is not in my personal portfolio; but it is on my watch list, and it looks like a reasonable value here.

I have to admit that I’d have trouble putting big money into Zoetis, which almost always trades at a steep premium. Those who have thrown megabucks into it, however, are pretty darn happy about the way their investment has absolutely crushed the market. 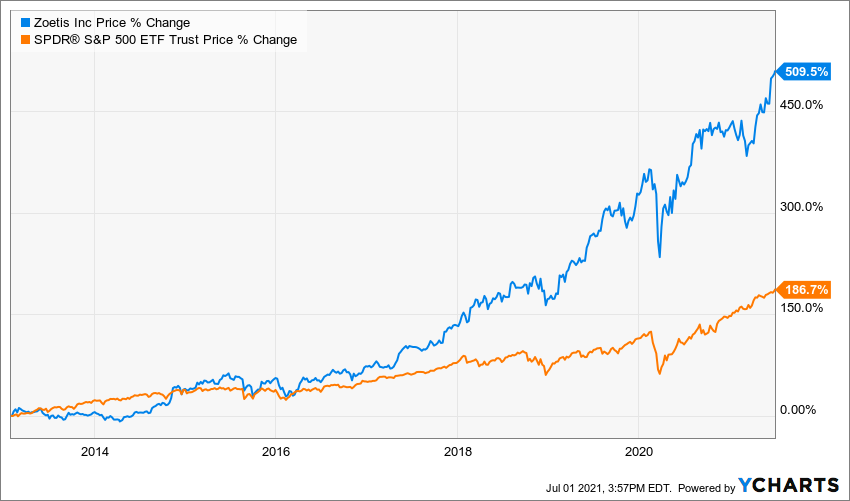 Zoetis represents what I talked about early in this article.

Like the overall market, the company’s stock price has been rolling. And while I’m hesitant to bet $10,000 at a time on a stock with a 40+ P/E ratio, I have no qualms about making the kind of gradual, small investments in ZTS that I do with all the GTCF positions.

As for the four June buys, I like the mix — 2 strong dividend payers in JNJ and SRE, and 2 fine growth companies in GOOGL and ZTS. That’s what I mean when I call the Grand-Twins College Fund a “growth and income” portfolio.

Note: For those who prefer more income in their investments, I also manage the Income Builder Portfolio for this site. Twice every month, I pick stocks, and about $1,000 is invested each time. My next IBP selection will be revealed in an article scheduled to be published on July 10. Until then, check out the portfolio’s home page — HERE — to see all 42 holdings, as well as links to every IBP-related article.