I admit it … even I was a little surprised by my latest Income Builder Portfolio selection.

You see, this stock and I have had kind of a love-hate relationship since I added it to my personal portfolio nearly five years ago: I often hated owning it because its price plummeted soon after I bought it (and it never seemed to recover); and I loved whining about it.

Not only that … after several years of aggressive dividend growth, the company has kept its annual payout frozen at $2/share since 2017. As one who uses Dividend Growth Investing as my primary strategy, that really frosted my flakes.

Then something cool (and long overdue) happened — the company started to realize its enormous potential, and its stock price began to climb.

Just last month, my position finally got back into the black.

And now, I’ve decided to add this company — CVS Health (CVS) — to the IBP.

Come Monday, June 21, I will execute a purchase order for about $1,000 worth of CVS stock on behalf of IBP money man (and this site’s co-founder) Greg Patrick.

Drug Store … And So Much More

Yes, CVS is a sizable drug-store chain. According to the company, 85% of the U.S. population lives within 10 miles of one of its pharmacies.

But to call CVS just a drug store would be like calling Scarlett Johansson’s Black Widow just another pretty face.

After buying Caremark in 2007, CVS became a major pharmacy benefit manager. In 2015, the company greatly increased the size of its footprint by acquiring Target’s (TGT) pharmacy and clinic business. And in 2018, CVS completed a $69 billion deal for Aetna, which gave the company one of the largest health-insurance operations in the industry.

These and a few smaller acquisitions have helped CVS go from drug-store chain to health-care conglomerate.

In addition to running brick-and-mortar stores and pharmacies, its Retail/LTC segment operates MinuteClinic walk-in medical clinics within many of those stores. CVS is gradually increasing deployment of its HealthHub concept, as well, offering customers access to “care concierges,” nurse practitioners, dieticians and social workers.

While all of that has made CVS a formidable corporation, the acquisition binge also substantially increased the company’s debt load. 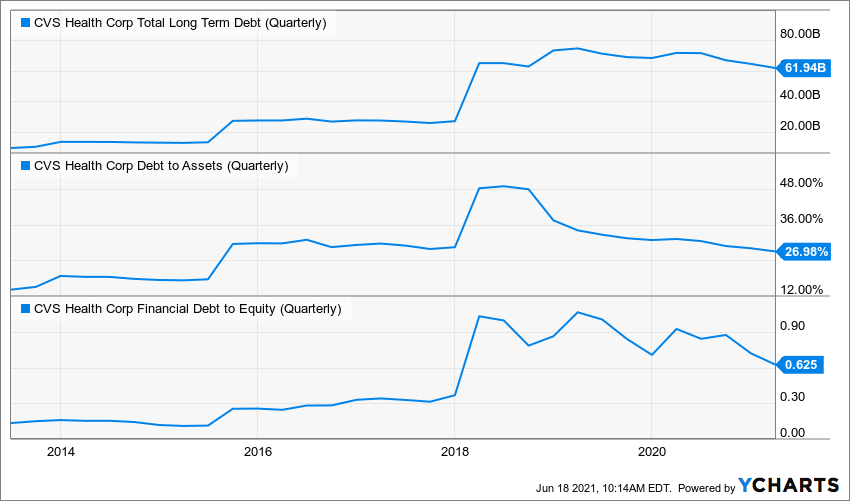 In the charts above, take note of the upturn in debt in late 2015, and then the huge spike in 2018, when the Aetna deal was finalized.

CVS Health’s stock price already had been under pressure in anticipation of that deal; Mr. Market usually dislikes big debt, so things went even more downhill after it was completed.

I first bought CVS for my personal portfolio on Oct. 3, 2016, and the next several years were ugly. 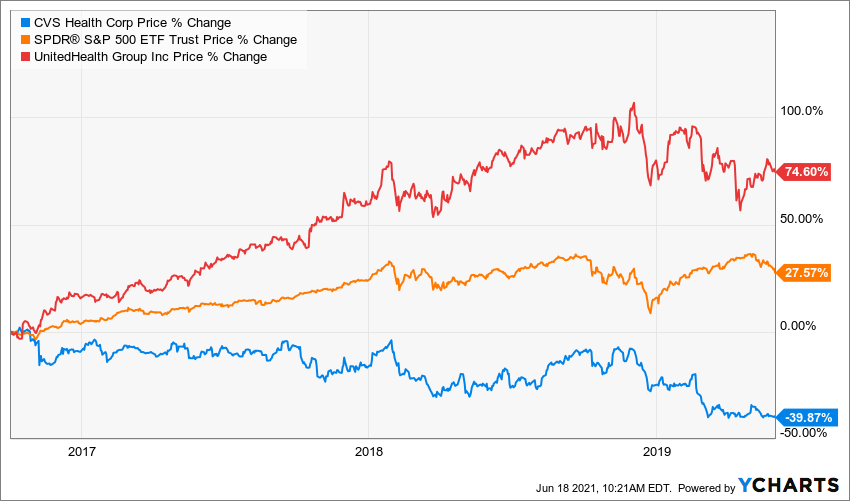 Second-guessing oneself is one of the “fun” parts of being an investor, so the performance of my CVS position looks even worse when I apply some context: I’d have been bragging instead of whining had I bought the competition — UnitedHealth Group (UNH) — or if I had invested in the overall market.

The Income Builder Portfolio has owned a stake in UnitedHealth since June 2019, and we have added twice to the position. It’s been a terrific performer, and I seriously considered simply adding to it again this time. 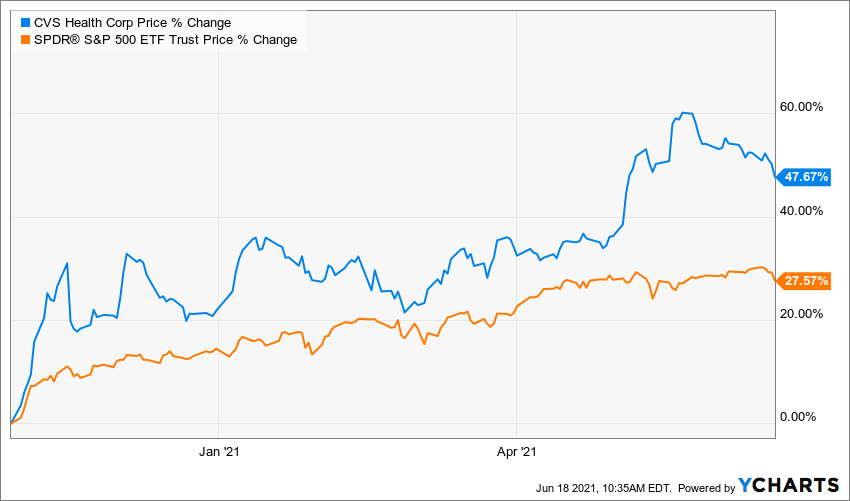 I will delve into valuation much more in my post-buy article, which is scheduled to be published on Tuesday, June 22.

Besides, reasonable valuation is only part of CVS Health’s attractiveness.

The company has improved its financial picture significantly by paying down debt and strengthening its balance sheet. 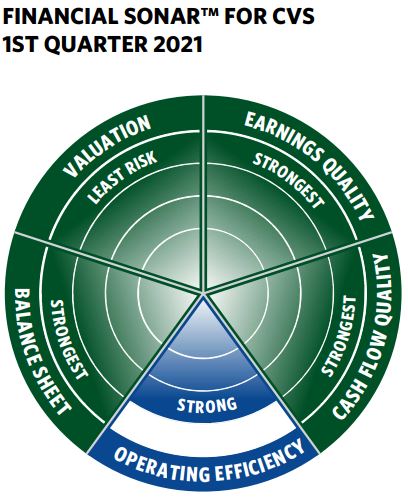 At its most recent earnings presentation, May 4, CVS chief financial officer Eva Boratto said the company paid down more than $3 billion of long-term debt in Q1 2021 alone, and $15 billion over the last couple of years.

That information came during a report in which executives announced outstanding results across the board. 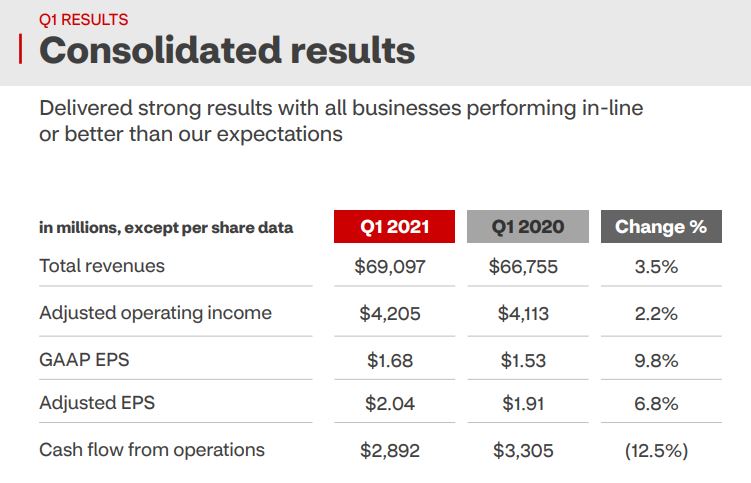 In addition, the company raised its full-year guidance to a range of $7.56 to $7.68 in adjusted earnings per share.

As horrific as the COVID-19 pandemic obviously was, it did create stock market winners and losers. CVS has been one of the winners, thanks partly to coronavirus testing in 2020 and vaccinations in 2021.

More recently, the Supreme Court’s rejection of yet another challenge to the Affordable Care Act figures to help the bottom lines of CVS, UnitedHealth and other insurers that participate in “Obamacare.”

CVS Health’s dividend growth over the previous decade and a half definitely was one of things that attracted me to the stock in 2016. 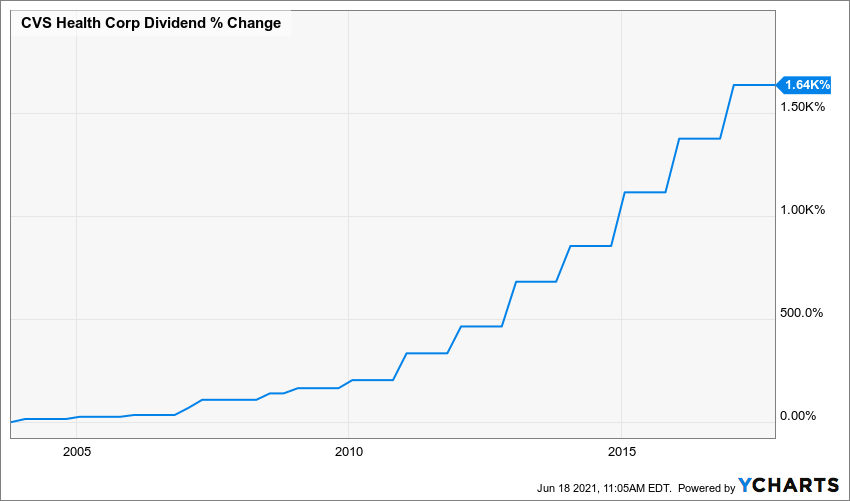 As the debt load grew, however, executives and the board of directors couldn’t really justify hefty dividend increases, and the decision was made to keep the quarterly payout at 50 cents.

While the DGI guy in me wasn’t thrilled, more than anything I want the companies in my portfolio to be financially sound for the long haul. So I was willing to accept the freeze — and I actually was relieved that the dividend wasn’t cut.

The company touts its 98 consecutive quarters — nearly 25 straight years — of paying dividends with no reductions. And I agree … that’s pretty impressive.

Despite the freeze, the stock yields 2.4% — almost a point higher than either UNH or the S&P 500.

And with CVS improving its financial picture, many market observers believe the company soon will return to its dividend-growing ways. CVS certainly has low payout ratios, suggesting it could easily handle a raise.

I’m not exactly turning cartwheels in celebration of CVS finally shedding its “loser” label within my personal portfolio.

For one thing, I’m quite certain that I’d break several bones if I tried to turn cartwheels. For another, a compound annual growth rate of about 2% is hardly reason to celebrate.

Investing, however, is a forward-looking exercise, and I believe CVS will be an outstanding addition to our Income Builder Portfolio.

Note: For more on the IBP, including a table showing every company we own and a list of related articles, check out the home page HERE. Also, view our most recent YouTube video HERE.