As an investor in individual stocks, I’ve always been a big fan of owning industry leaders.

The same is true when I make my selections for the Income Builder Portfolio — for which I get to invest my boss’ money. (Yes, I admit it’s a cool gig!)

Up and down the portfolio, we have some of the biggest names in their fields … so why should my latest choices be any different?

On Monday, June 7, I executed purchase orders for about $500 each worth of Broadcom (AVGO), one of the world’s largest semiconductor producers, and Comcast (CMCSA), the media and entertainment conglomerate.

This was our third purchase of Comcast, and first since November 2019, giving the portfolio approximately 61 shares. It was the fourth time we’ve bought Broadcom, and the IBP now has about 10.8 shares.

We have invested $2,913 in our AVGO position, ranking it behind only Johnson & Johnson (JNJ) and Lockheed Martin (LMT) on our list of dollars committed per position.

With a market-crushing total return of about 90% on our first three Broadcom buys, the money has been well spent so far. (You’re welcome, boss!)

Monday’s purchase solidified Broadcom’s spot as one of the IBP’s top 3 income producers. Comcast, meanwhile, moved solidly into the middle of the “income standings.” (See all 41 positions, as well as every IBP-related article, on the portfolio’s home page — HERE.) 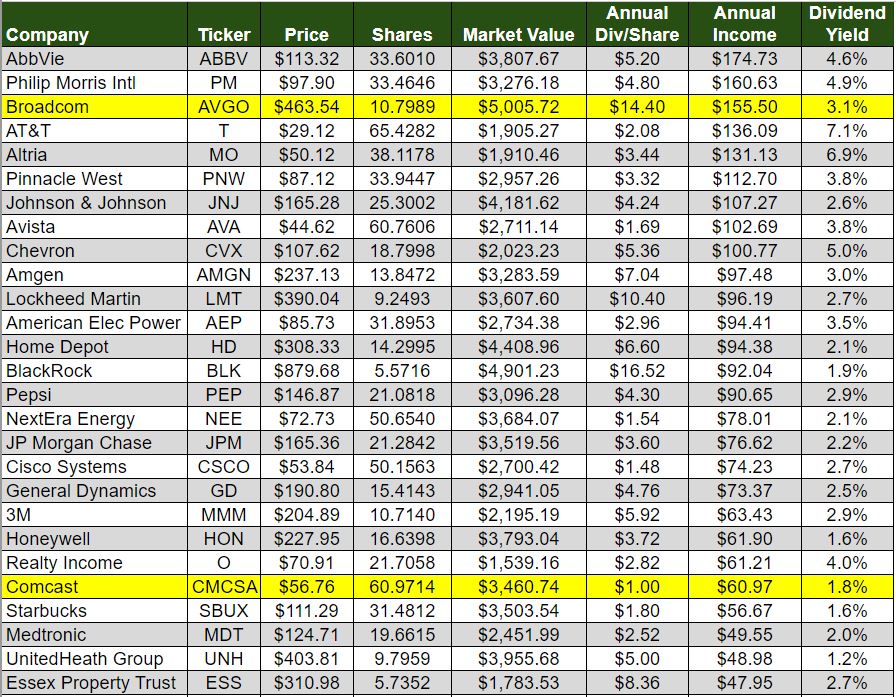 Monday’s purchases added $23.40 to the IBP’s expected annual income production (yellow area of the table below). The two companies are projected to bring in around $216 in combined dividends over the next year (green area), about 7% of the portfolio’s total.

Because we bought both companies before their ex-dividend dates — June 14 for AVGO, and July 6 for CMCSA — all the IBP’s shares, including the newest ones, will generate income on the companies’ next pay dates.

The income from each position will be reinvested right back into each company — a process informally known as “dripping” — thereby buying another fraction of a share of each.

We do the dripping thing with every IBP component, as mandated by the Business Plan. It happens over and over, quarter after quarter, year after year. That’s how an income stream gets built, and that’s why we gave this project such a clever name.

Most analysts are high on Broadcom and Comcast.

Of the 18 market-watchers surveyed by TipRanks, 16 consider AVGO a buy. The average target price represents a 14% upside, and even the lowest one was higher than the price we just paid.

It’s a similar story for Comcast — with 15 of 18 analysts calling the stock a buy, and a target price that suggests a double-digit-percentage upside.

Reuters also polls analysts, and again both companies get strong grades. For Broadcom, 23 of 28 give the stock either a buy or outperform rating.

For CMCSA, 26 of 32 say buy or outperform … and as the red-circled area below shows, one analyst shifted from hold to outperform just last week.

Shortly before the market opened Monday, two analytical firms affirmed their outperform ratings on Broadcom, while also raising their target prices — Bernstein went from $500 to $540, and Baird from $500 to $550.

That’s right in line with what several others had to say about AVGO, and analysts mostly gave the thumbs-up to CMCSA, too.

Morningstar Investment Research Center actually raised its fair value on both companies, including a big jump from $350 to $400 for AVGO; its analysts nevertheless still believe that Broadcom overvalued, while determining that Comcast is fairly valued.

Value Line included Comcast in its model portfolio of Stocks for Income and Potential Price Appreciation, and it also listed CMCSA among 10 companies it deemed Stocks for Long-Term Gains. 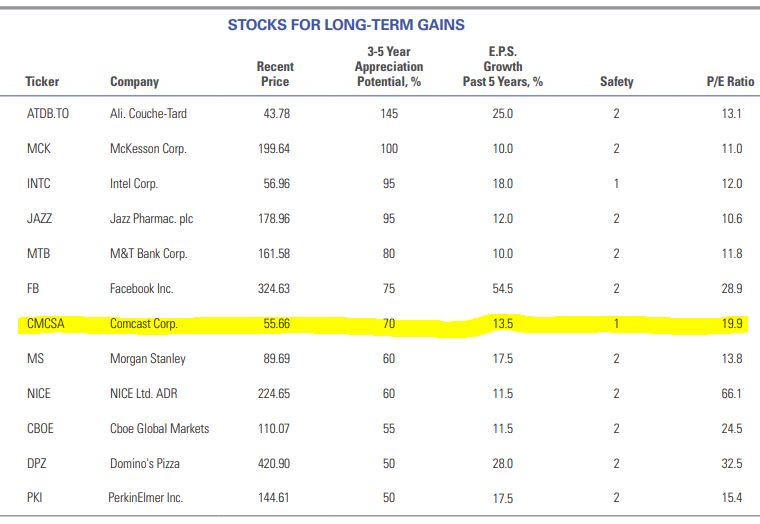 Value Line showed some love for Broadcom as well, putting the chipmaker on its list of Highest Growth Stocks. AVGO is the only one of the 100 listed to have a yield higher than 2.5%.

The FAST Graphs images below suggest that both companies are at least a little overvalued, with current “blended P/E ratios” higher than their norms of the last decade.

However, both companies are projecting outstanding growth in the years ahead, as shown by the yellow highlighted areas. 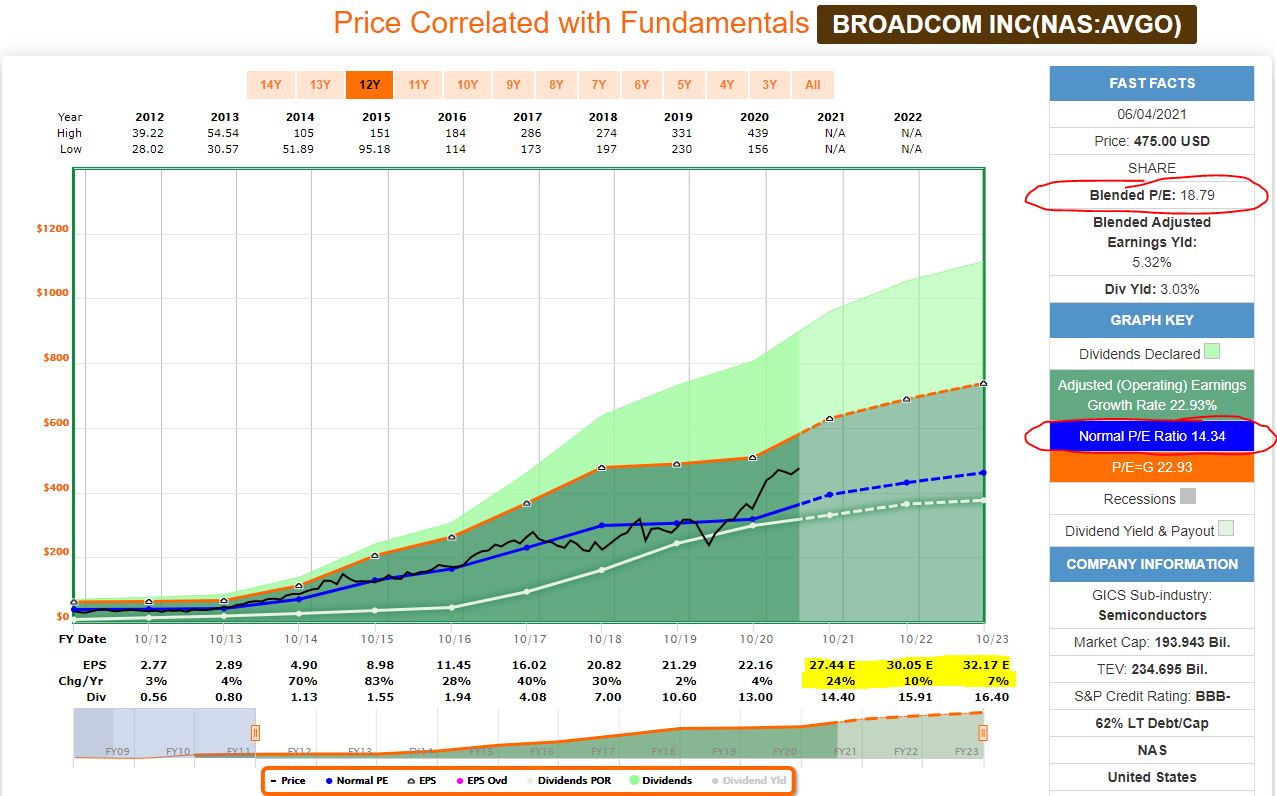 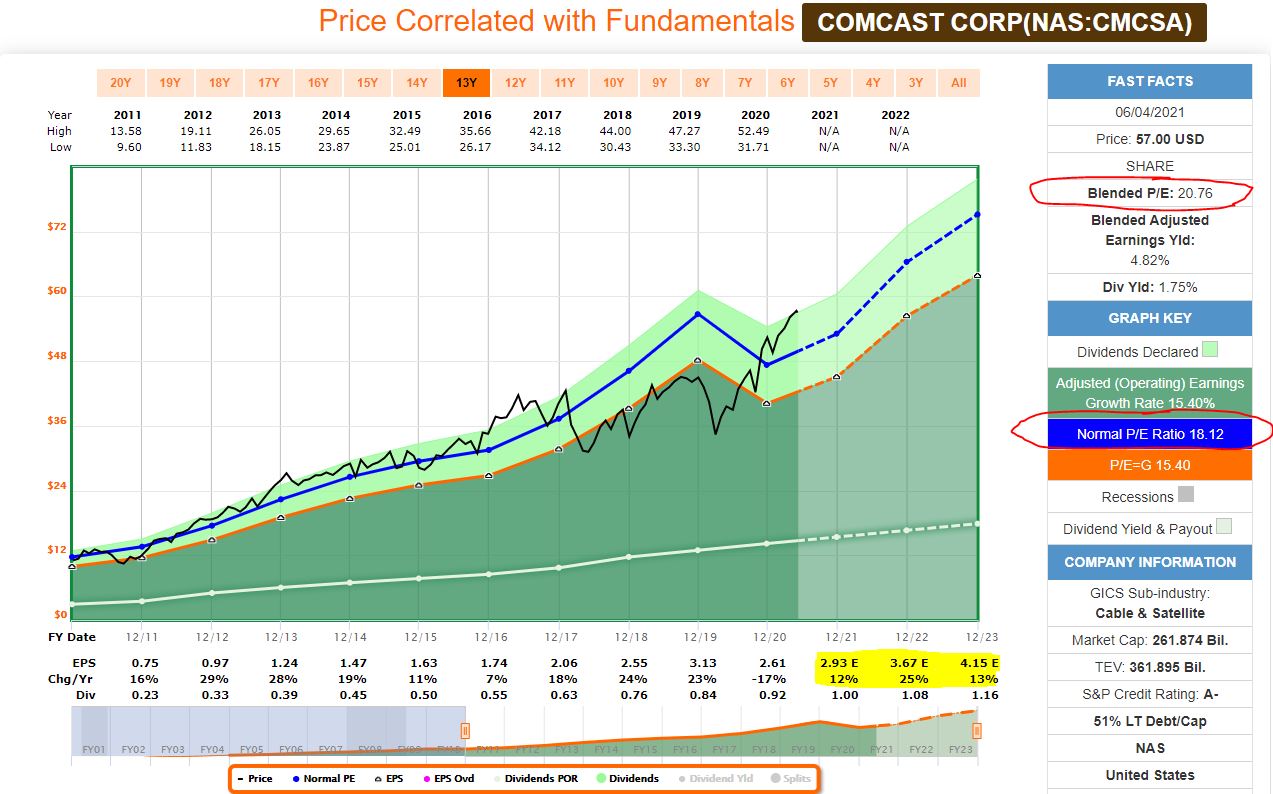 Neither Broadcom nor Comcast is “on sale,” but neither appears to be crazy expensive, either.

While each investor needs to decide for himself or herself if these high-quality companies are attractively valued enough, I’m quite pleased that we keep increasing the size of the AVGO and CMCSA positions within the Income Builder Portfolio.

Note: I also manage a second real-money portfolio for this site, the Grand-Twins College Fund. It’s a “growth and income” endeavor, holding capital-appreciation plays such as Alphabet (GOOGL) and DraftKings (DKNG), as well as proven dividend growers like Texas Instruments (TXN) and UnitedHealth Group (UNH). Check out the GTCF home page — HERE.