On April 22, a renowned media conglomerate made a major announcement regarding its future — one that includes strengthening its partnership with its biggest semiconductor supplier:

Comcast today announced the achievement of another 10G technical milestone, conducting the first-ever live lab test of the Full Duplex DOCSIS system-on-chip (SOC) device that will pave the way for Comcast to deliver multigigabit upload and download speeds over its hybrid-fiber coaxial (HFC) network.

Built by Broadcom, the device is expected to become the world’s first production silicon to be developed using the DOCSIS 4.0 Full Duplex standard, which represents an evolutionary leap forward in the ability to deliver ultra-fast speeds over HFC networks. One of the most important breakthroughs in the DOCSIS 4.0 standard is the ability to use network spectrum more efficiently, allowing operators to dramatically increase upstream speeds without sacrificing downstream spectrum to do so.

There is a lot of technological jargon in that announcement — and I have little doubt that it is relevant to those who are into that stuff — but it’s not what really matters for the purposes of this article.

What’s important here is that two of the companies we own in our Income Builder Portfolio — Comcast (CMCSA) and Broadcom (AVGO) — are working together yet again on a product that will help both of their businesses and, by extension, their shareholders.

One thing for sure: They have helped the IBP a ton in the 2 1/2 years that both have been part of the portfolio. 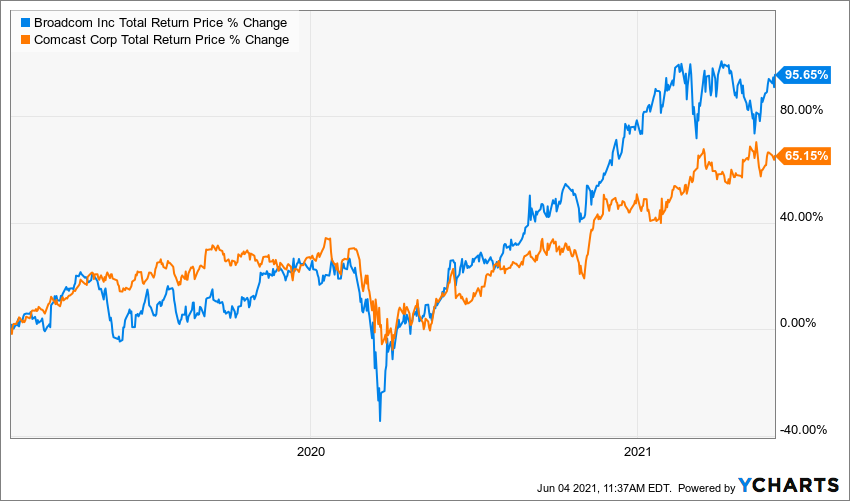 Now, I’m not the sharpest knife in the drawer … but even I’m smart enough to keep a good thing going.

Come Monday, June 7, I will add to our AVGO and CMCSA positions by dividing the IBP’s $1,000 semimonthly allocation between the two blue-chip companies.

It’s been about 6 months since we last bought Broadcom, and we haven’t purchased any shares of Comcast since all the way back in November 2019, so let’s catch up with these industry leaders.

The timing is perfect for an AVGO update, as the company presented its 2021 second-quarter earnings on Thursday, June 3 … and, as usual, the report was stellar.

Broadcom reported solid second-quarter results with revenue above the midpoint of management’s guidance, thanks to broad-based semiconductor growth. The firm’s results were also buoyed by healthy networking demand led by cloud data center spending. Broadcom’s product portfolio is well tailored to address the work-from-home environment and we expect continued growth over the course of 2021, especially as enterprises resume infrastructure technology spending consistent with the COVID-19 recovery. We remain positive on Broadcom’s networking, storage, and broadband business units, and we applaud the firm’s integration efforts of its software acquisitions such as Symantec and CA Technologies. …

Infrastructure software revenue came in at $1.8 billion, which was up 4% year over year. While we aren’t expecting material growth from this segment, we note it is a strong cash-flow generating and high-margin business, with over 90% of bookings representing recurring subscription and maintenance during the quarter. Management has a long-term revenue growth target in the mid-single digits, which we deem attainable.

That is a business performing well in every way. Of course, that isn’t exactly new. 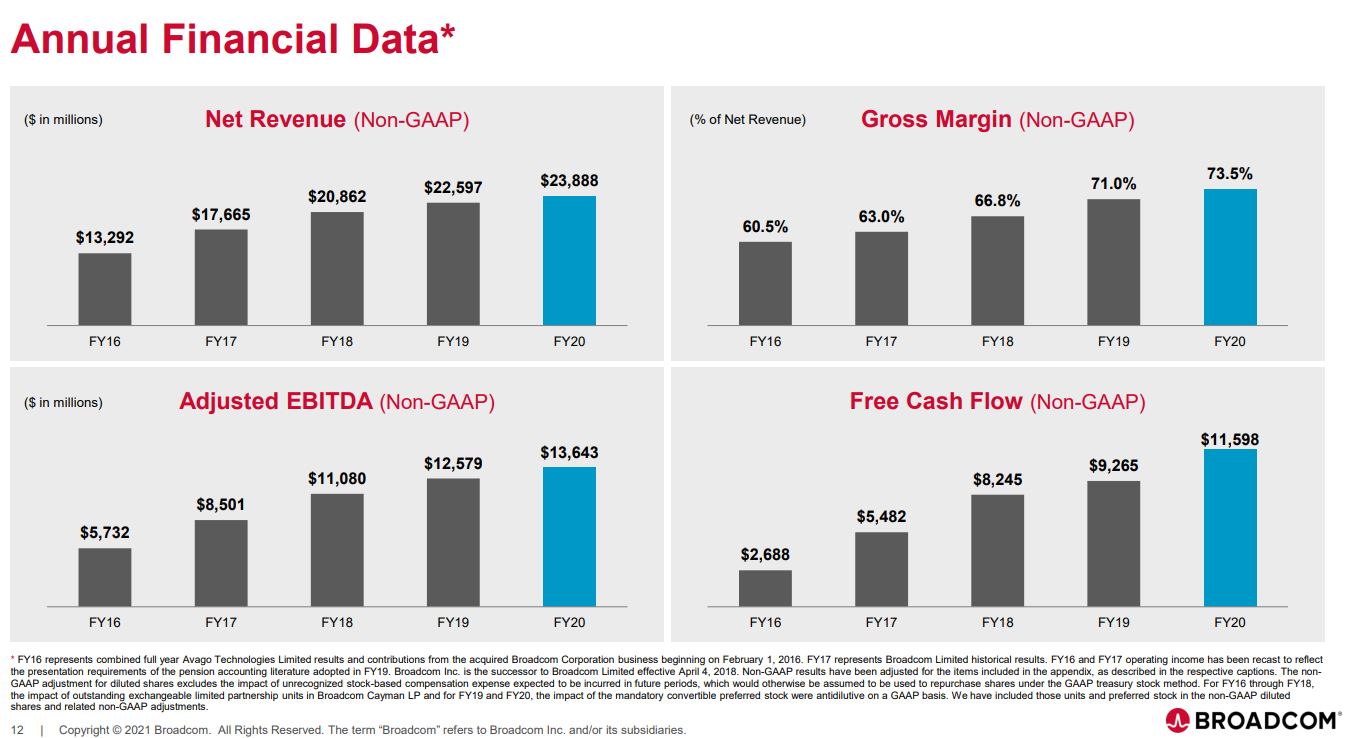 Considering it all, it’s not surprising that Broadcom has been one of the IBP’s best performers.

Comparison is to the SPDR S&P 500 Trust ETF (SPY), assuming that the same amount of money had been invested on the same dates as the IBP’s Broadcom buys.

Business only figures to increase for Broadcom, whose customer list goes far beyond Comcast to include the likes of Apple (AAPL), Alphabet (GOOGL), Verizon (VZ), Boeing (BA), Honeywell (HON) and Lockheed Martin (LMT).

During its earnings call, AVGO projected Q3 revenue to be about $6.75 billion — a 16% year-over-year increase, and higher than analysts had expected.

One wild card that could boost sales even higher in the future: There is a semiconductor shortage, and President Biden has included billions of dollars in his infrastructure package to ramp up production from American chipmakers.

I’m not sure leaders on both sides of the aisle will be able to agree on infrastructure legislation at all, but it would be profitable for companies like Broadcom if it happens.

When it comes to what I call “quality metrics,” Comcast has it all over Broadcom. By most accounts, CMCSA has a wider moat, is financially stronger, pays a more reliable dividend and has better credit.

Yes, Broadcom appears to be the more “risky” investment … and with great risk, there sometimes can be great reward.

Unlike AVGO, Comcast has not crushed the market during our holding period. Nevertheless, the CMCSA shares that the IBP bought on Jan. 29, 2019, and Nov. 12, 2019, have combined for a 47% total return.

And as the company said during its annual shareholder meeting on Wednesday, June 2, CMCSA did outperform the market in 2020 — keeping with the long-term trend. 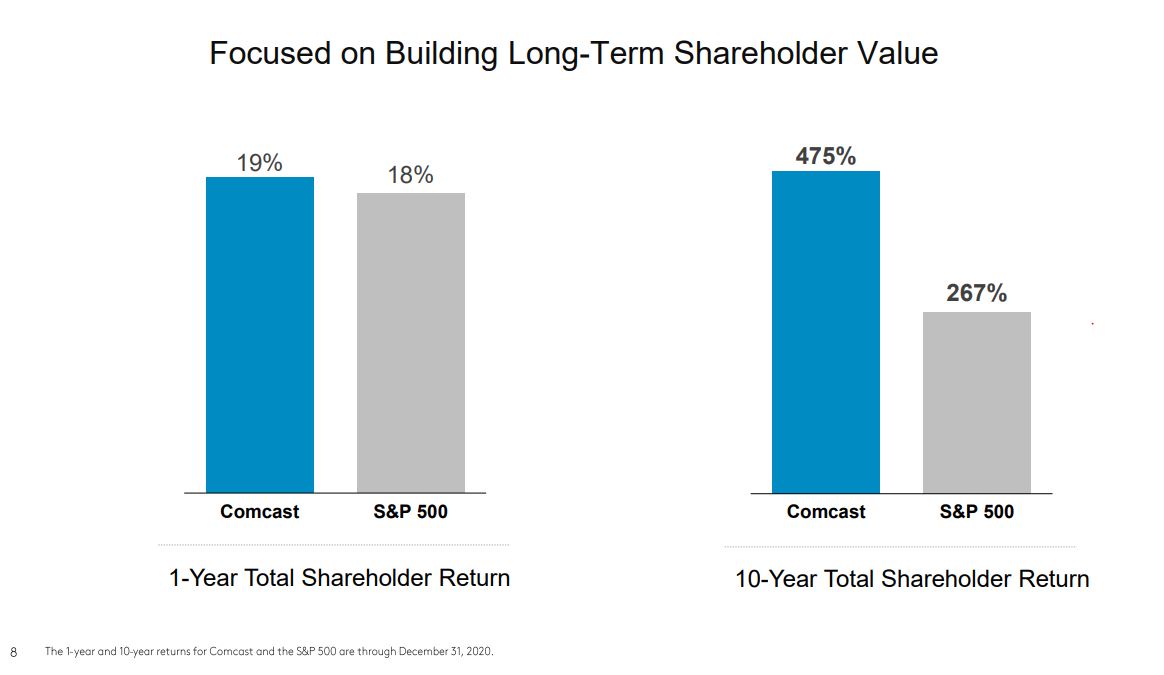 Still, with the global COVID-19 pandemic wreaking havoc on the economy, 2020 was a challenging year — as Comcast’s financials showed. 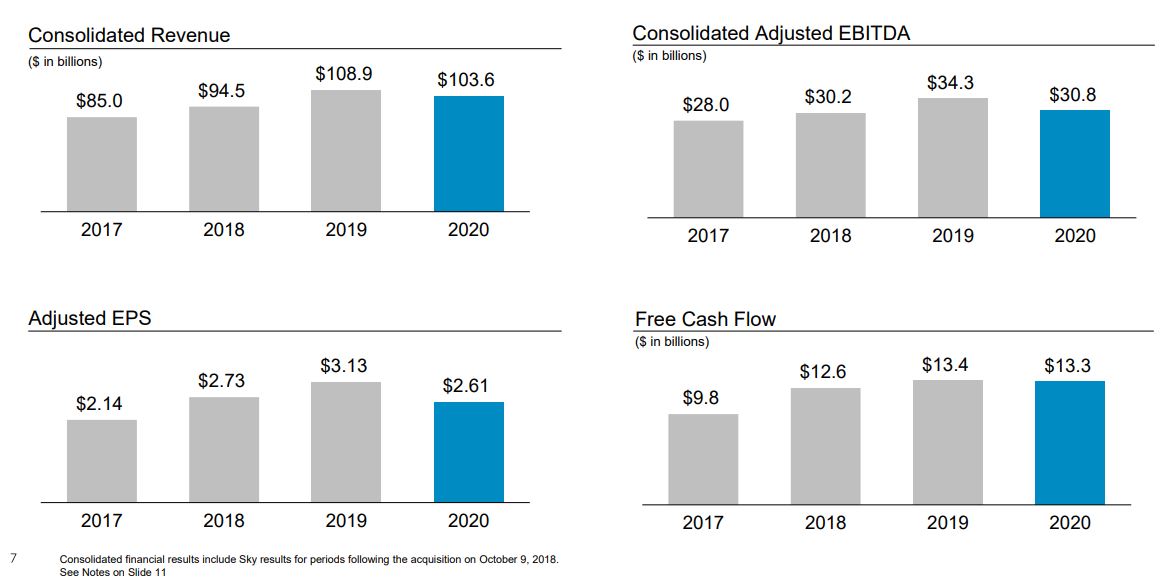 Things started improving late in the year, and Comcast’s Q1 2021 earnings presentation on April 29 showed off the resiliency of the company’s business. 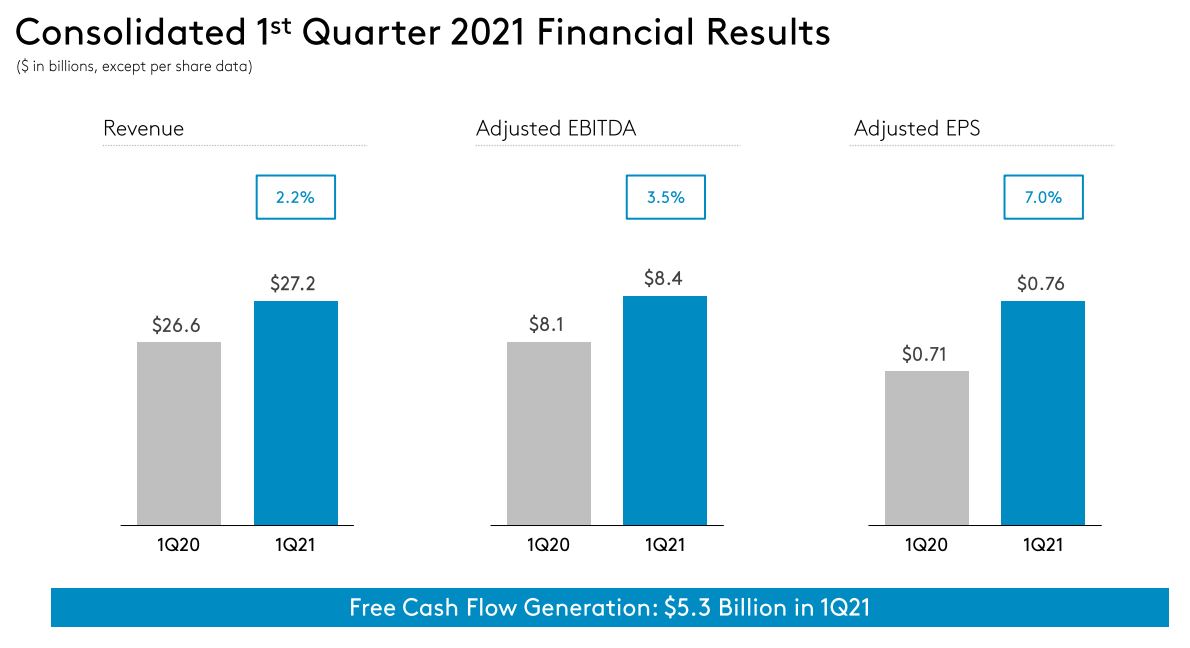 Notably, the recovery happened across the board, throughout Comcast’s various divisions, and investors responded by driving up the stock price by more than 4% that day. 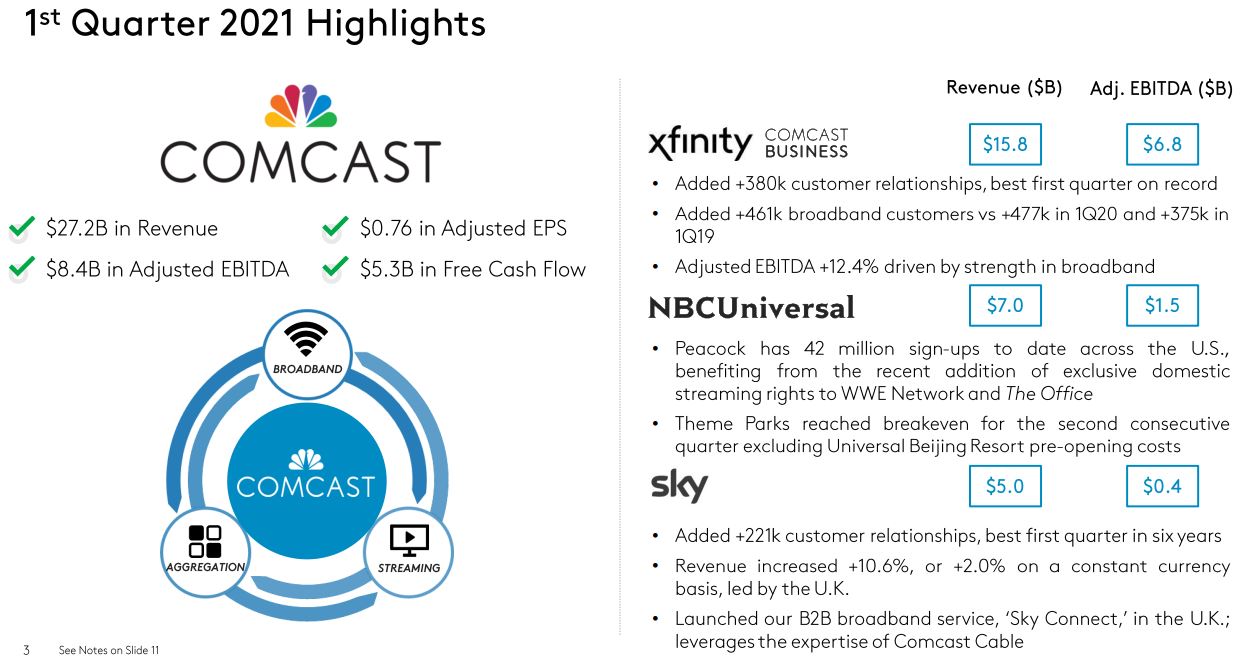 A huge event took place in Comcast’s industry last month, when AT&T (T) announced that it would merge its WarnerMedia business with Discovery (DISCA), and then spin off that new company.

There had been speculation that Comcast might want to get in on a deal that would let it merge its NBCUniversal operation with WarnerMedia, and CMCSA investors seemed relieved that didn’t happen.

They also were happy to hear Michael Cavanagh, Comcast’s chief financial, officer say this at the JPMorgan Global Technology, Media and Communications Conference: “Hear me loud and clear, we like the hand we have, and M&A is not an answer.”

He went on to talk about the recovery of the company’s theme parks, as pandemic-related restrictions are being lifted: “In Florida … we’re hitting some days now where we’re actually doing better than 2019 pre-COVID,” and “we will see Beijing opening later this summer.”

Comcast has raised its dividend for 13 consecutive years, as this slide from its Q1 2021 earnings presentation illustrates. 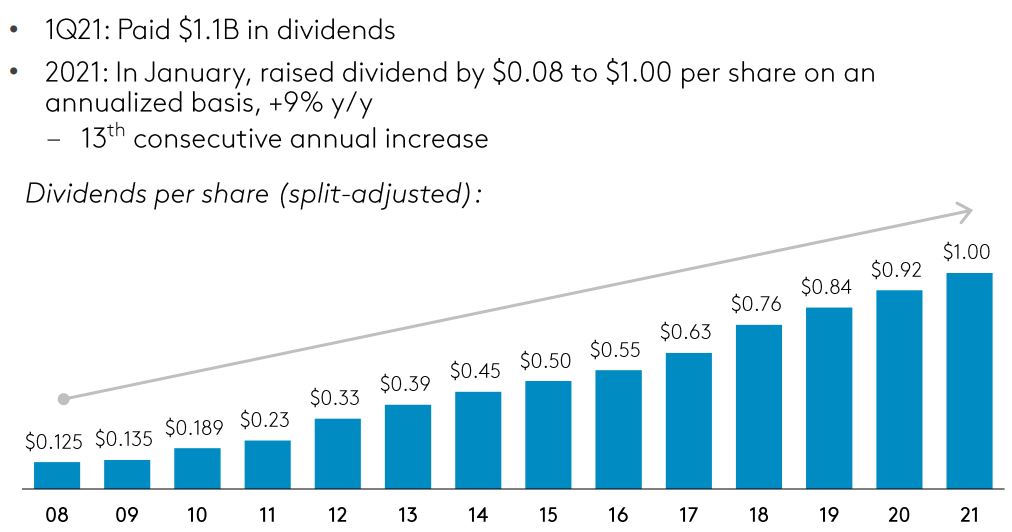 Comcast’s free cash flow easily covers its dividend, and Simply Safe Dividends gives it an 89 “safety” score on its 1-to-100 scale.

“We are committed to returning capital to shareholders,” Cavanagh said in January, when the company announced a 9% dividend increase. “And we have a proven track record. We have increased our dividend 13 years in a row at a 17% CAGR, significantly in excess of the S&P over that same time period.”

Broadcom’s dividend-growth streak is now a decade long — and it has been spectacular, with the compound annual growth rate approaching 50% the last five years. 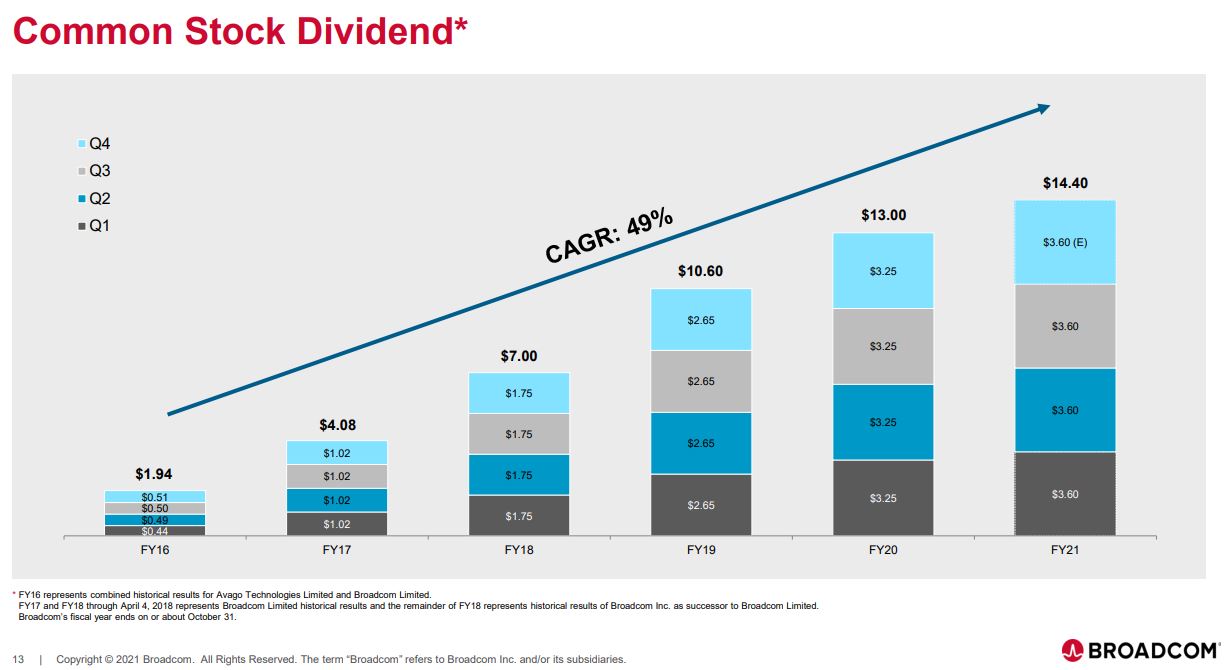 The most recent raise was “only” 10.8%. That seems low given the company’s history of 20%, 30% and higher increases, but it’s nonetheless quite impressive given the pressures that the pandemic had on the business.

When I selected AVGO the second time, back in January 2020, its yield was higher than 4%. But the surge in the company’s stock price has knocked that down to about 3%.

It’s kind of neat that these two wonderful companies work together to help each other’s bottom lines. Broadcom and Comcast certainly have improved the Income Builder Portfolio’s total return and income stream so far.

Of course, there is one downside to this great performance: Each company’s stock is getting pricey.

I’ll be discussing valuation, as well as some income-related data, in my post-buy article. Look for it on Tuesday, June 8.