Sometimes, when an investor takes a flyer on an unproven company, the price soars to the stars; sometimes, it crashes and burns.

It’s far too early to say which will be the case for the first flyer I took with my Grand-Twins College Fund … but I certainly have no reason to complain about its market-crushing performance so far.

Logan and Jack — who at some point in the late 2030s and/or early 2040s will be the beneficiaries of the portfolio that my wife, Roberta, and I are funding for them — have no reason to complain, either! 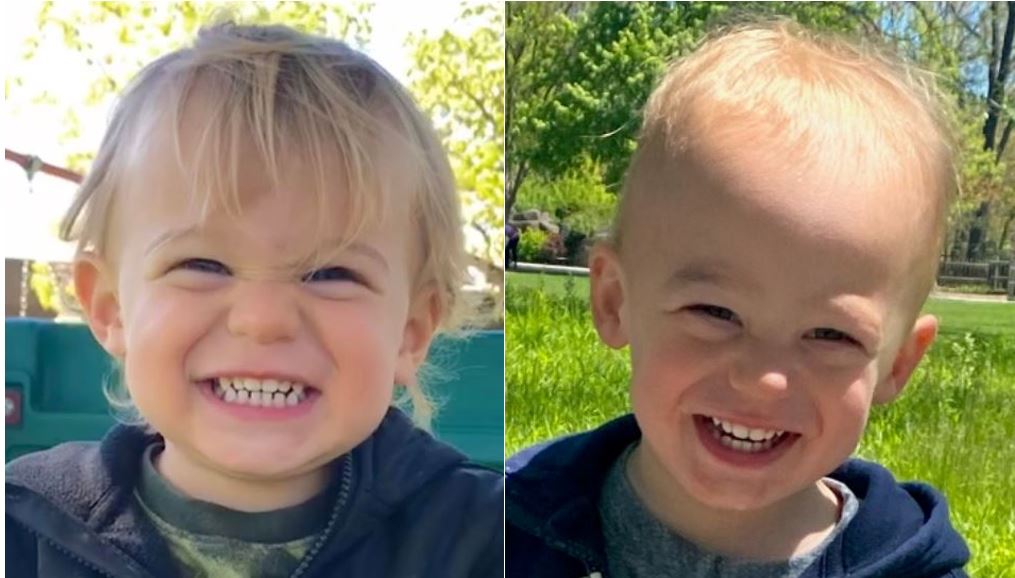 The company I’m talking about is digital sports and gambling operator DraftKings (DKNG). Here’s what I said after I first decided to buy it for “LoJack” last June 26:

I am building this portfolio through small investments — $25 or $50 at a time — and I believe it’s OK to be bold, maybe even take an occasional flyer on something speculative. DraftKings … certainly fits that description.

My first 2-share buy was at $33.33 apiece, and DKNG has beaten the red-hot overall market handily since then. 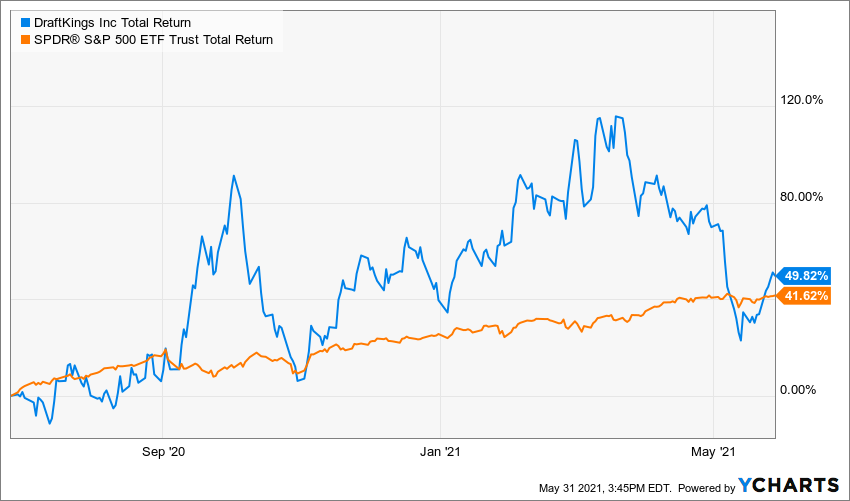 The second purchase of DraftKings for the GTCF, another share at $31.50, took place about three weeks later, on July 13. Since then, the stock has just about doubled the return of the SPDR S&P 500 Trust ETF (SPY). 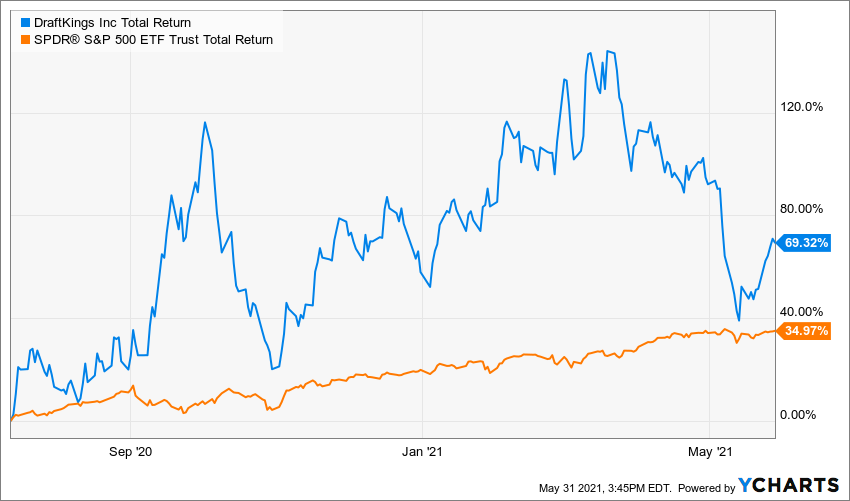 Look at the peaks and valleys in that chart! DKNG has been a very volatile stock, not one for the faint of heart.

On May 7, DraftKings presented an outstanding earnings report, topping revenue estimates and boosting full-year sales guidance. As a result, analysts have become even more bullish on the company, which just started trading publicly in the spring of 2020.

Seventeen of the 24 analysts surveyed by TipRanks call DKNG a “buy,” and their average 12-month price target represents a 39% upside.

As I built up other GTCF positions, I hadn’t added to the DraftKings stake for about 10 months. In March, it briefly touched $74 before coming back down.

Finally, on May 14, with DKNG’s price inexplicably having fallen for several sessions despite the fine earnings report and analyst optimism, I grabbed share No. 4 for the Grand-Twins College Fund at $41.84. 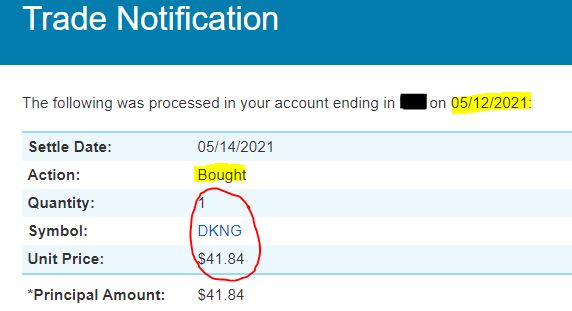 In the 2 1/2 weeks that followed, the price moved up nearly 20% … and although I expect DKNG to be a long-term holding, that kind of instant feedback is always fun!

I also made three other purchases in May, adding to the GTCF’s positions in McDonald’s (MCD), Constellation Brands (STZ) and UnitedHealth Group (UNH).

(Disclosure: I own much larger positions of McDonald’s and DraftKings in my personal portfolio.)

With this round of buys, I now have put between $135 and $151 into each of the 17 GTCF holdings during the 12 months since the portfolio’s inception.

While I expect to “let the winners run,” which will lead to an unbalanced portfolio, I do plan to invest a roughly equal amount of money into each position the first couple of years.

The table below can be found on the GTCF Home Page (HERE), which also includes links to every article I have written about the portfolio. The following data is through the end of May, but it is updated regularly on the site. 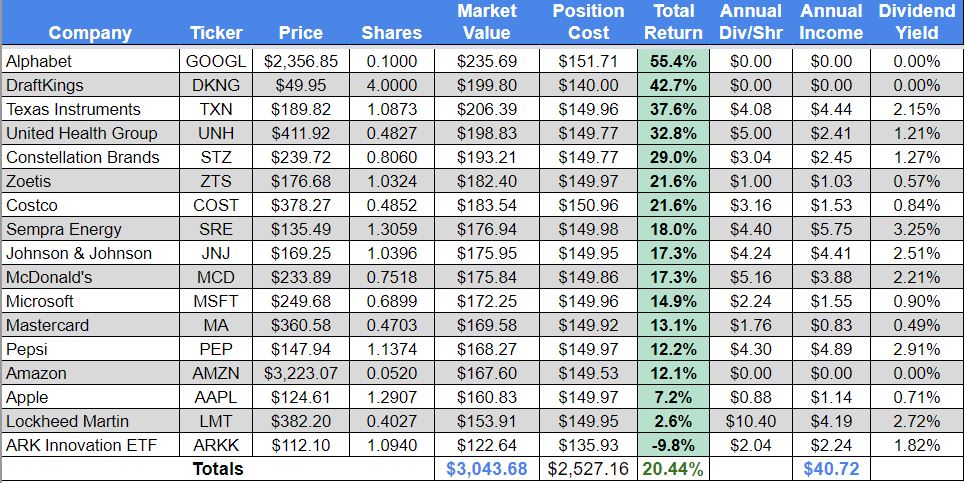 Alphabet (GOOGL) has been among the GTCF total-return leaders since the beginning, and DraftKings’ mid-May swoon helped Google’s parent company grab the top spot.

The only loser so far has been my second speculative play, the ARK Innovation ETF (ARKK), which invests chiefly in “disruptive technology” companies. Although I’m a pretty patient guy, I will only let ARKK disrupt this portfolio’s otherwise outstanding performance for so long!

May was “meh” for the Grand-Twins College Fund, as the 12 companies and one ETF in which there were no new investments combined for a small loss.

In addition to the ETF, the portfolio’s main laggards last month were tech giants Apple (AAPL), Mastercard (MA) and Amazon (AMZN). That’s not surprising, given that the tech-heavy Nasdaq saw a 1.2% decline; SPY eked out a 0.7% gain.

Constellation Brands, which sells beer, wine and hard liquor, also has taken a large stake in a Canadian cannabis company as it makes a major play on the gradual legalization of marijuana.

Constellation and the world’s largest health insurer, UnitedHealth, have outperformed the market by miles over the last decade, while McDonald’s has kept pace nicely. 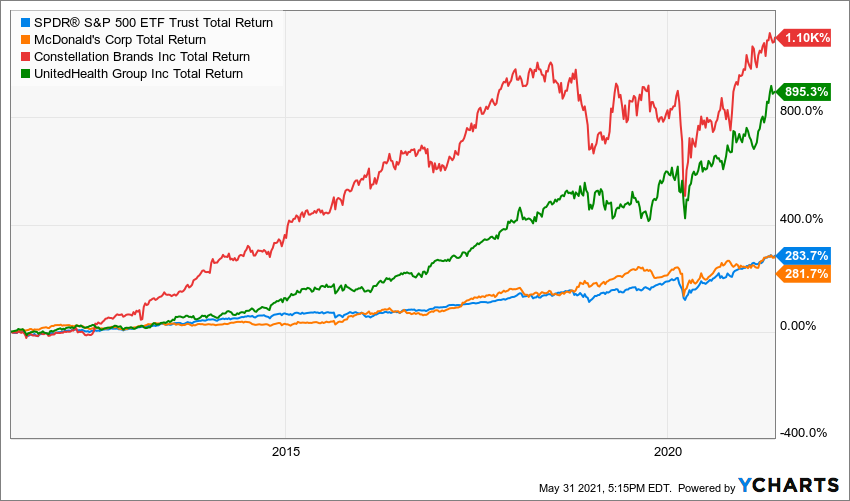 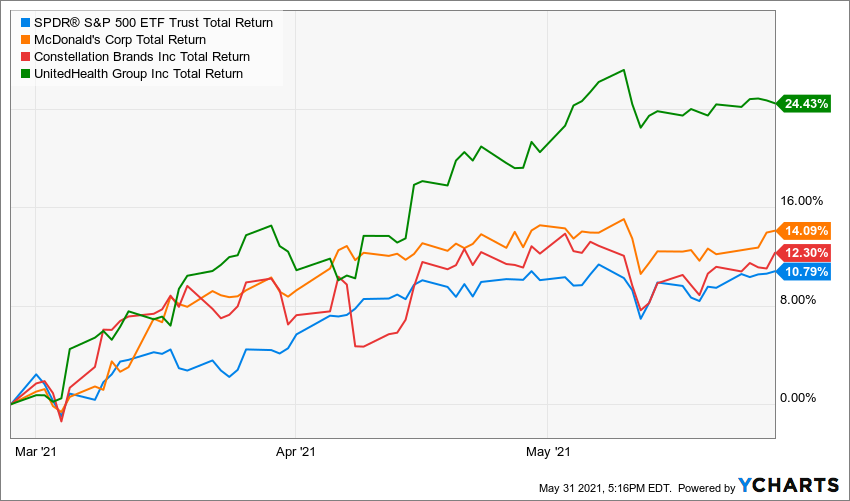 These are financially strong companies with competitive economic advantages. They have been growing their dividends for years, and allocating their capital well.

The contrast between these established, blue-chip corporations and a speculative newcomer like DraftKings — which has yet to turn a profit — can be seen quite easily in the following table of what I call “quality metrics.”

The quality of McDonald’s, Constellation and UnitedHealth is reflected in the way their share prices have been bid up this year.

It would be difficult for me to portray any of the three as an obviously compelling buy right now. Each has a sky-high forward P/E ratio, and numerous analytical services say there is limited upside over the next 6-12 months.

Although it appears that DraftKings is getting more love than the other stocks I just bought for the GTCF, analysts generally are quite bullish on MCD, STZ and UNH, too.

For example, the analysts cited by TipRanks combine to give McDonald’s, Constellation and UnitedHealth 47 “buy” ratings, 9 “holds” and zero “sells.” And their average 12-month upside is about 9%.

The Grand-Twins College Fund is being built with very small purchases over an extremely long timeframe, so each company likely will be overvalued, undervalued and fairly valued at many points over the years. So although I will try to take advantage of “bargains” as they present themselves, I will be dollar-cost-averaging into the positions and will not obsess about valuation.

Please remember that I have chosen to make this project public not to convince others to replicate the GTCF but to present interesting candidates for further research and to discuss portfolio-building concepts.

OK … I admit it … I’ve also made it public so I can show off photos of my adorable grandkids!

The Grand-Twins College Fund is a “growth and income” portfolio. Although the emphasis is on growth, I am a DGI practitioner at heart who appreciates companies that pay reliable, increasing dividends.

As illustrated in the table above, 5 of the GTCF’s 14 dividend payers had distributions in May; they brought in $2.47, which was reinvested back into the same companies.

That dollar amount was 17% higher than the same five positions generated three months ago. In the interim, we had added to our Apple, Constellation, Mastercard and Texas Instruments positions, and had received dividend increases from COST (12.9%), AAPL (7.3%) and STZ (1.3%).

Yes, it seems silly to even mention the relative pennies the GTCF is receiving now, as well as the tiny fractions of shares that dividend reinvestments are buying. The growth we’ve already seen, however, demonstrates how income will become a much larger part of the portfolio as it matures.

May meant a lot more to me and Roberta than $2.47 in GTCF income. Our third grandson, 7-month-old Owen, traveled with his parents all the way from Seattle to visit us in Charlotte.

Like Jack and Logan, his older cousins from Chicago, Owen sure knows how to brighten the day for Grandpa … and for everyone else. 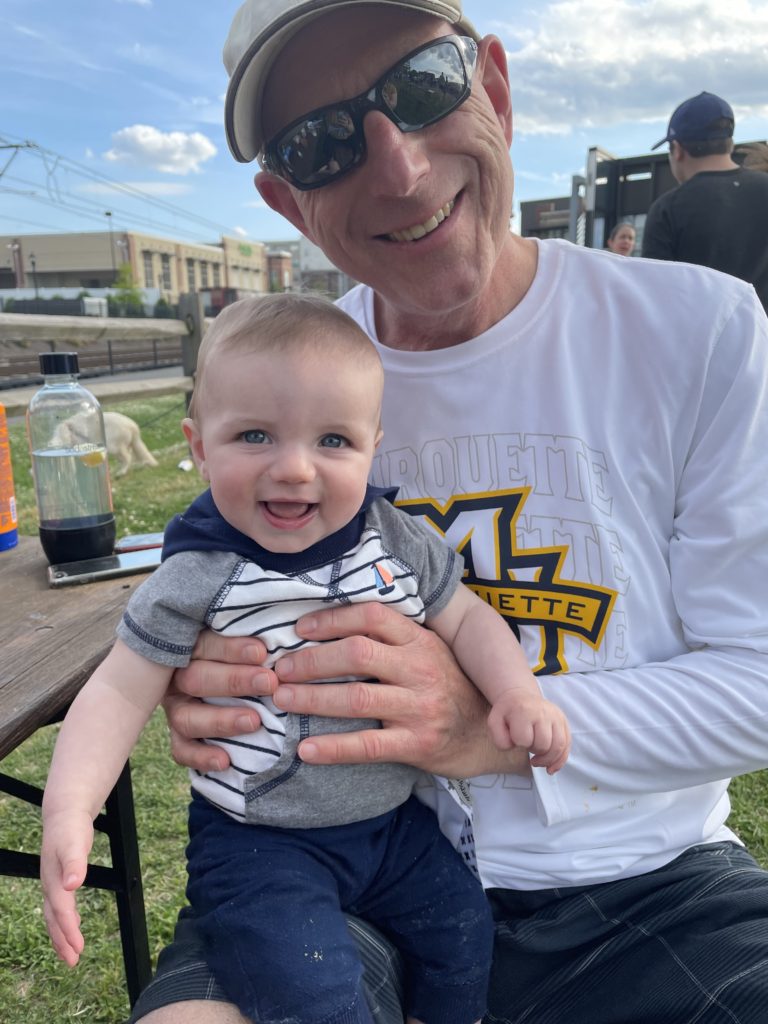 Or maybe the smile on Owen’s face was simply him knowing that his grandparents soon will start contributing to his college fund, too!

Note: For those who prefer a bigger dose of dividends, I also manage the Income Builder Portfolio for this site. The IBP holds 41 stocks (including MCD, STZ and UNH), and my next pick will be revealed in an article scheduled to be published on Saturday, June 5. Until then, you can see the IBP’s entire 41-stock portfolio HERE, and check out my latest IBP video for YouTube’s Dividends and Income Channel HERE.