Each of the three stocks we just bought for our Income Builder Portfolio is within a few percentage points of its 52-week high price, to which I say… so what? 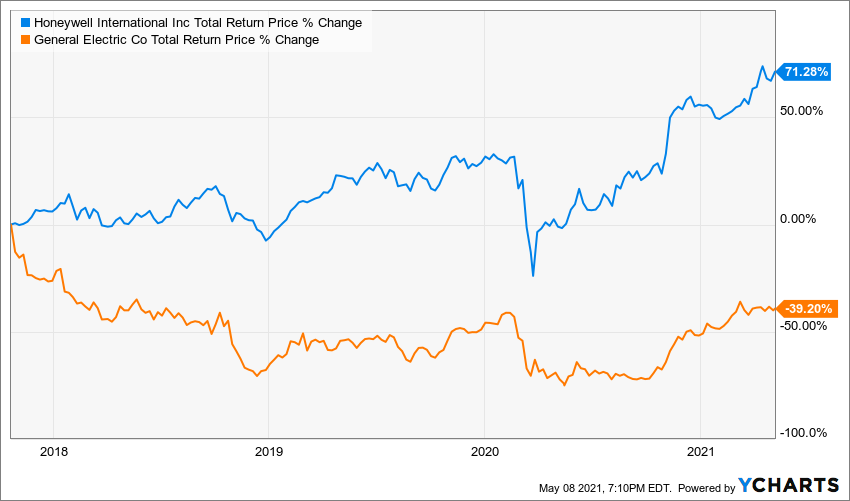 The 52-week figures were meaningless. They still are meaningless, not just for Honeywell and General Electric but for pretty much every stock.

So after executing purchase orders on Friday, May 7, on behalf of Daily Trade Alert, I’m not overly concerned that AbbVie (ABBV), Johnson & Johnson (JNJ) and Medtronic (MDT) are approaching their highs.

ABBV was bought in two transactions a split second apart, as sometimes happens with limit orders.

If ABBV or JNJ or MDT moves up from its current price, it will have had nothing to do with its relationship to its 52-week high. Same if one moves down.

For what it’s worth — and it’s just a piece of information, not gospel — analysts generally are bullish on all three.

Of the five analysts surveyed by TipRanks, four call JNJ a “Buy,” with a 13% price upside over the next year. Even the most pessimistic of the five has a $175 target price, about 4% higher than Friday’s $168.50 close.

Of the 12 analysts polled about ABBV, 10 call it a Buy, with the composite suggesting a 9% upside.

They’re singing the same tune about Medtronic, as 14 of 15 analysts call it a Buy, with a 6% aggregate upside.

So that’s a combined 28 Buy ratings, 4 Holds and zero Sells.

I don’t consider that “proof” of anything. It just means these particular analysts do not believe that the 52-week highs for ABBV, JNJ and MDT signal some kind of top.

Thomson Reuters’ analyst surveys look similar to those of TipRanks, with the vast majority feeling that these winners still have plenty of room to run; I obviously agree, or I wouldn’t have  decided to add to the IBP’s stakes.

Looking at what various analytical services say, JNJ, MDT and ABBV appear either fairly valued or a bit overvalued.

In the table below, I use green as a “go” sign, basically meaning a service says that company is undervalued; blue represents fairly valued, and yellow suggests a call of overvaluation.

So from those opinions, anyway, there is no consensus on any of the three … though Morningstar says each is overvalued.

When it comes to reliable, growing dividends, it’s hard to beat these three companies — as the beautiful staircase patterns on the following image suggests. 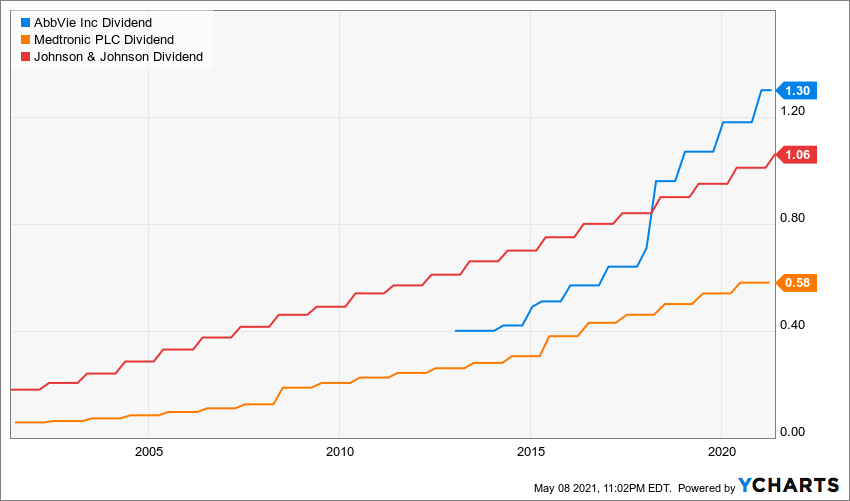 Johnson & Johnson has raised its annual payout for 59 consecutive years; Medtronic has 42 straight years of dividend increases; and AbbVie has been aggressively growing its distribution ever since it was spun off from Abbott Labs (ABT) in 2013.

The shares bought Friday added more than $31 to the IBP’s projected annual income stream, and these three companies are now expected to generate more than $325 in dividends over the next 12 months — roughly 11% of the portfolio’s total.

AbbVie has jumped past Philip Morris (PM) to the top the IBP projected annual income leaderboard, and JNJ became the 7th member of our $100 club.

(The full table — including all 41 of the portfolio’s holdings, as well as links to every IBP-related article — can be seen on the home page HERE.)

Medtronic, which is a smaller position than either JNJ or ABBV and which has the lowest yield of the three (1.8%), nonetheless moved up six spots on the table after this buy.

MDT could be the next IBP component to announce a dividend raise, something it usually does in May or June every year.

The medical-device company has been increasing its payout between 7% and 10% most recent years; due to the effect COVID-19 has had in reducing elective surgeries, however, I’m going to count on only about a 3.5% raise this time to $2.40/share.

That would mean a 60-cent quarterly dividend to be paid in July on 19.6615 shares, and that $11.80 would be reinvested to buy another fraction of MDT stock.

That same pattern will be repeated for years, not just with Medtronic but also Johnson & Johnson, AbbVie and the rest of our holdings — building an ever-growing income stream, and demonstrating why we named this project what we did.

Health Care stocks now represent 16% of the portfolio, ranking the sector behind only Information Technology.

The IBP has committed more investing dollars to Johnson & Johnson — about $3,242 — than to any other company… and that seems appropriate.

With its perfect AAA credit rating from Standard & Poor’s, its stellar 99 “safety” score from Simply Safe Dividends, its wide moat, and its six-decade history of raising distributions to shareholders, JNJ is the quintessential Dividend Growth Investing stock.

I feel very good about the present and future of all three of these health-care giants, and I am always happy to add to these positions in the Income Builder Portfolio.

Note: JNJ also is a component in the other public, real-money portfolio I manage for this site, the Grand-Twins College Fund. That “growth and income” project features high-quality (and high-flying) stocks such as Alphabet (GOOGL), UnitedHealth Group (UNH), Amazon (AMZN) and Texas Instruments (TXN). See the entire portfolio HERE.