Everybody needs a little help now and then, so I went straight to the experts for assistance in writing this article. 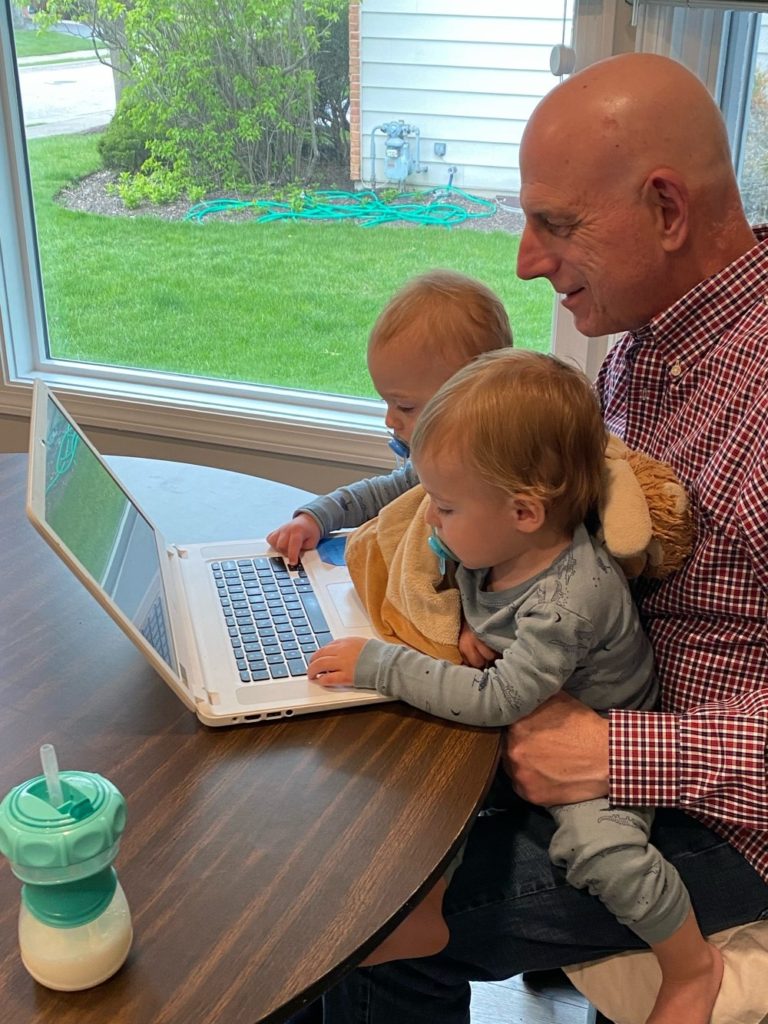 OK, so my grand-twins, Logan (in foreground of above photo) and Jack, weren’t the greatest helpers when it came to the actual mechanics of putting together this article. They mostly banged on the keyboard to produce outstanding hot takes such as: sdfg zzxdvsdfua 45amdf0==== 67ag’;;zxcfg dgf

They did inspire the idea behind this article and many others, however: The Grand-Twins College Fund.

During April, my wife and I got to hang out a lot with “LoJack” (and their parents) during a fun visit to their new suburban Chicago home. April also saw me make my monthly contribution to the GTCF.

April also was a pretty darn good month for the GTCF’s 13 other components.

Because we made no new investments into those 12 stocks and one ETF, we can do an accurate month-over-month comparison … and their combined total return of 5.8% beat the 5.3% of the S&P 500 Index.

During March, I had added to the portfolio’s GOOGL and AMZN stakes — as well as to the positions in Apple (AAPL) and Microsoft (MSFT), two others that went on to easily outperform the market in April.

Gambling company DraftKings (DKNG), meanwhile, continued its rollercoaster existence, and it was the GTCF’s poorest performer in April. The following graphic shows DKNG’s major swings compared to the S&P 500 Index’s relatively smooth price ascension since I last bought the stock in July. 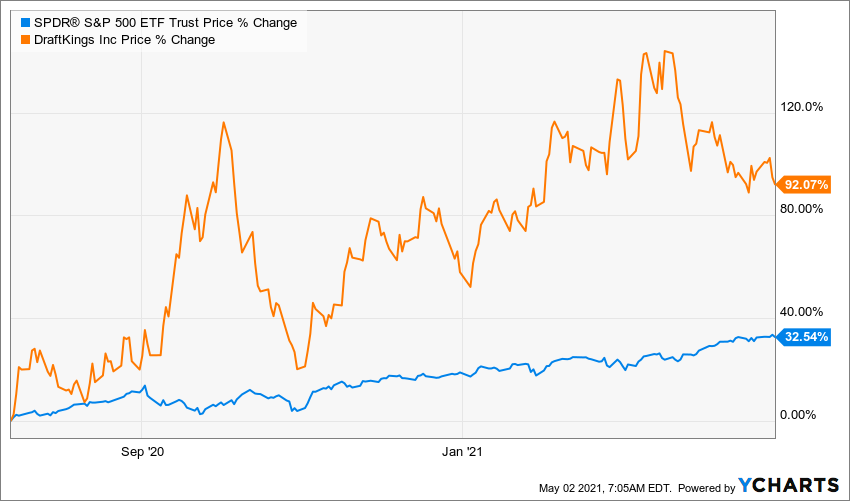 While smoothness might be easier on many investors’ nerves, volatility sometimes can produce big rewards — as illustrated by DKNG’s nearly 3-to-1 outperformance of the market during the last 9 months.

DraftKings’ pullback, combined with Alphabet’s surge, helped Google’s parent company close the gap on DKNG in the battle for overall Grand-Twins College Fund supremacy since I launched the project last June. (The following table is updated constantly, and can be seen on the GTCF home page — HERE.) 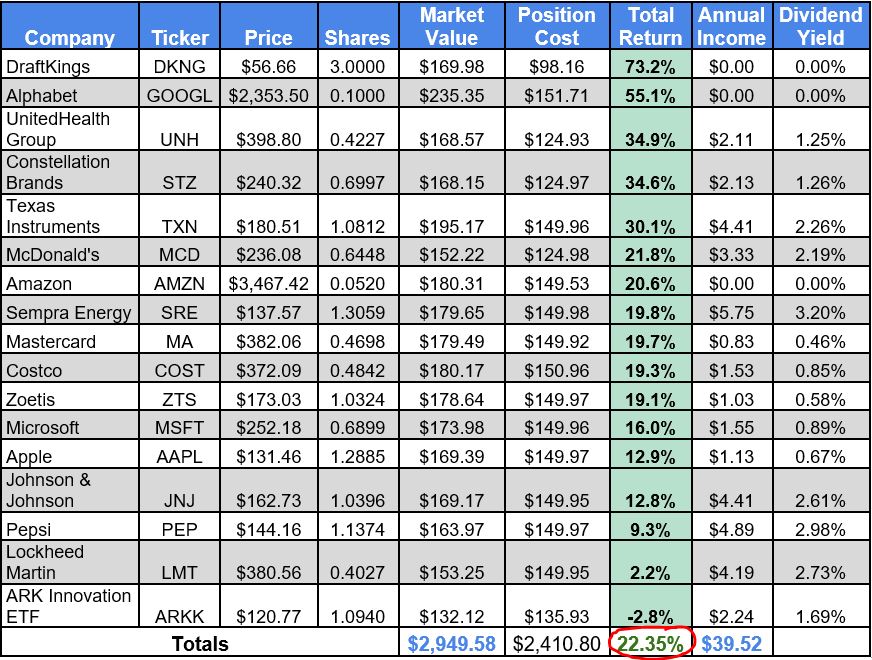 The 22.35% total return through April 30 is quite delicious, and I like the variety of companies that have exceeded 20%:

A speculative growth stock; the world’s most ubiquitous internet operation; the top health-insurance company; a leading booze purveyor; a semiconductor giant; the world’s dominant restaurant chain; and the No. 1 shopping site (and cloud services provider).

Obviously, I like industry leaders. I see many years of growth ahead from these fine companies, which eventually will help fund the grand-twins’ academic pursuits.

For now, Jack and Logan are happy to pursue each other as they race around their family room. 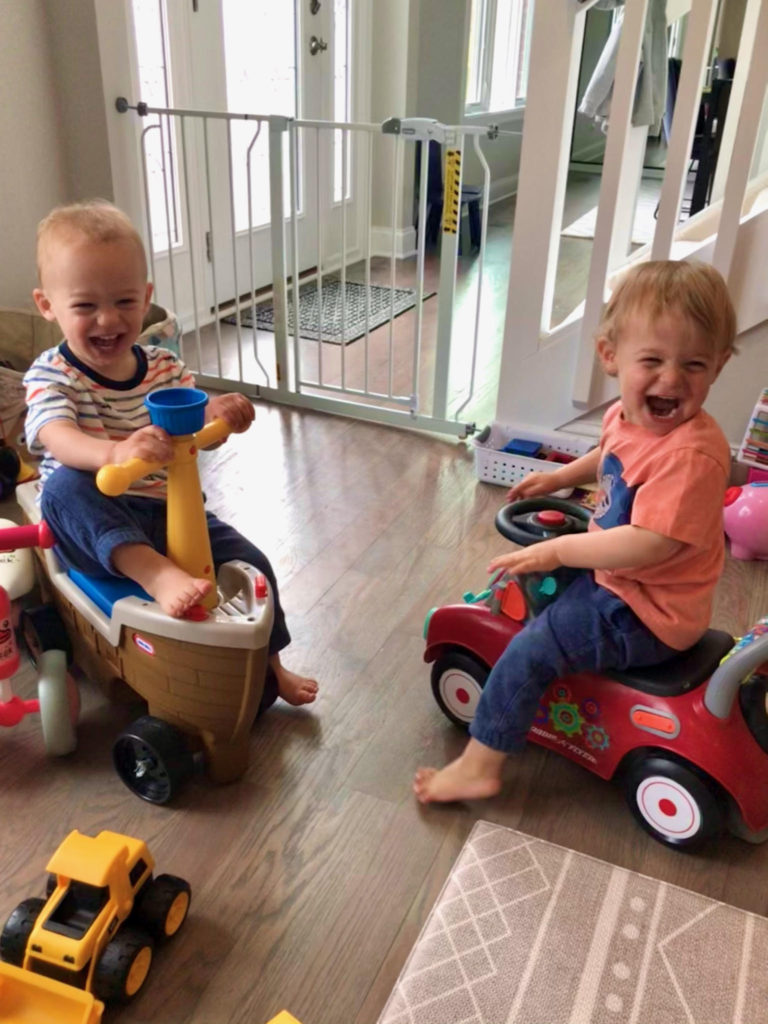 With the possible exception of more speculative plays such as DraftKings and the ARK Innovation ETF (ARKK), I like to think that this portfolio is filled with extremely high-quality companies.

And the four whose shares I bought in April can make a claim for being the crème de la crème.

Look at their “quality metrics” — basically a sea of green, the color I use to signify top ratings by objective sources:

Johnson & Johnson is one of only two companies in the world to receive a AAA credit rating from Standard & Poor’s. (Microsoft is the other.)

The other three also have solid credit ratings, and all four are financially strong, wide-moat corporations with major competitive economic advantages over their peers.

Texas Instruments and Mastercard, the two tech companies among these four, had huge run-ups before pulling back modestly, and both now seem quite overvalued.

In a testament to its quality, TXN received an almost perfect “Financial Sonar” from Jefferson Research — with the only mark against it being high valuation. 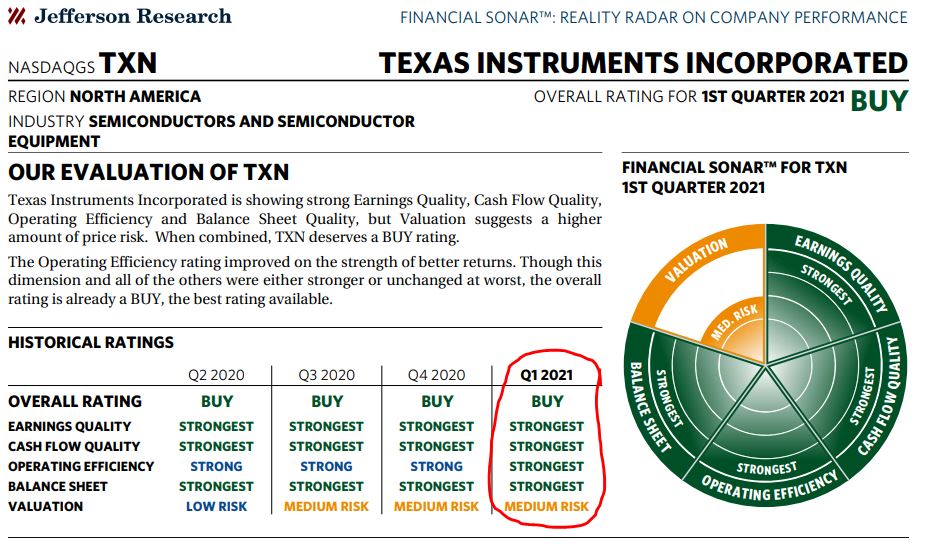 As for Mastercard, despite its sky-high 47 forward P/E ratio, 15 of the 17 analysts surveyed by TipRanks call the stock a “Buy.” The analysts’ average 12-month price target for MA is $420 — a 10% upside from its price at the end of April.

Here is a look at what an assortment of analytical services say about valuation and potential price movement of Mastercard, Texas Instruments, Johnson & Johnson and Lockheed Martin:

Investments in the GTCF are made in small, regular increments, a process that will continue for at least 16 more years — which might explain why I don’t pay too much attention to valuations as I put it together.

However, I don’t write about the GTCF to convince others to replicate it; the purpose is to present investment candidates for further research and to discuss portfolio-building strategies.

There are plenty of investors who do care about valuation as they evaluate purchase candidates — and I’m one of them when I manage my own larger portfolio — so I do like to examine valuation in my articles.

In that vein, Lockheed Martin would appear to be the most “affordable” of these four, judging by its P/E ratio and the opinions of analytical services.

The following FAST Graphs image seems to confirm LMT’s “buyability,” as the stock is trading at a P/E ratio that is lower than its historic norm (purple-circled areas). The red circle shows that the end of the black price line sits below the blue normal P/E ratio line. 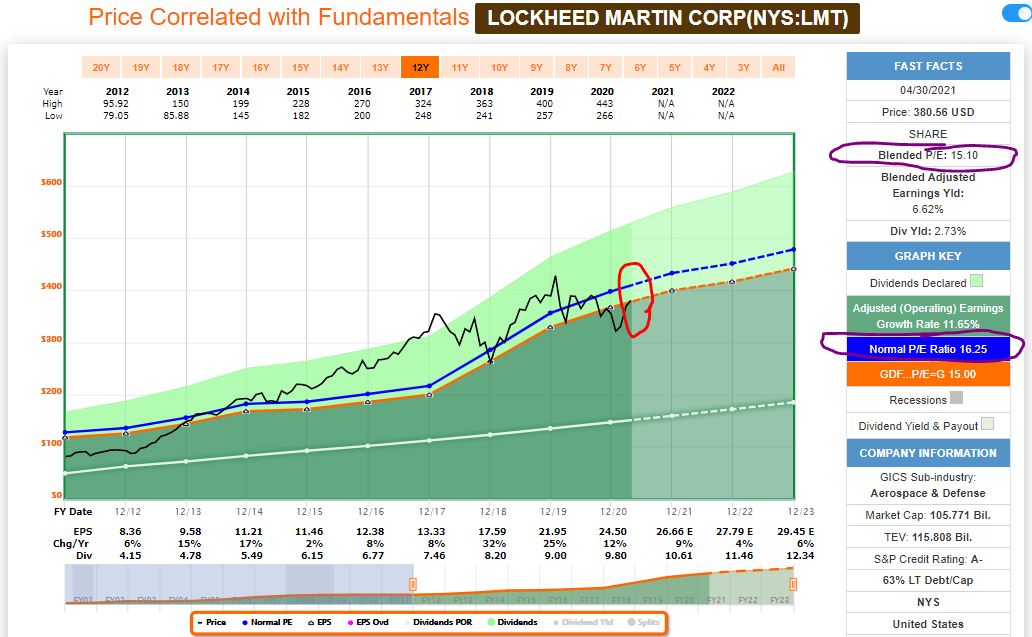 The Grand-Twins College Fund is a “growth and income” portfolio that stresses growth first. But dividends do matter to me because they are part of total return.

Of the GTCF’s 14 dividend payers, only one had a distribution in April: Sempra Energy (SRE). The western U.S. utility paid $1.43 into the portfolio, and that was reinvested to buy .0103 of a share.

This marks the 59th consecutive year JNJ is increasing its dividend. The other three also have been growing divvies for many years.

Here is dividend-related information on the four, as provided by Simply Safe Dividends:

Although the GTCF is only producing about $40 in annual income now, we’re very early in the game.

Over time — as more shares get bought, as dividends get reinvested, and as companies raise their payouts — the income stream will be material in the future.

It’s enough to make Grandpa and Logan smile … though Jack obviously is thinking deeply about how the GTCF eventually will help him with his college costs. 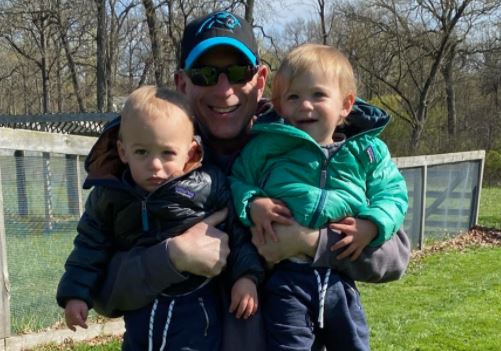 One reason I invested in JNJ, LMT, MA and TXN in April is that I hadn’t bought their shares in awhile, and I’m trying to roughly equal-weight this portfolio’s investment dollars for now.

In a year or three, I will care less about that. The best performers — and those that I think will perform best going forward — will dictate where my money goes.

For now, I’m very pleased with the way things are working out with the Grand-Twins College Fund. I mean, 22% total return in 10 months … what’s not to love?

Note: The other real-money project I manage for this site, the Income Builder Portfolio, also owns JNJ, LMT and MA. My next stock pick for the IBP will be revealed in an article scheduled to be published on Friday, May 7. Until then, you can see the IBP’s entire 41-stock portfolio HERE.