Last May, seeing a long slog ahead for the Walt Disney Co. (DIS) due to the effects of the COVID-19 pandemic, I decided to dump our Income Builder Portfolio’s shares of the company’s stock.

I continue to believe my thesis was sound at the time: The company’s once-highly profitable cruise line is still not sailing, and its theme parks and many of its other businesses remain troubled.

I admit to being stunned by the turnaround in the stock price — which more than doubled from the depths of the coronavirus crash, zooming past $200 to an all-time high before settling into the $180s — and I commend Disney executives for aggressively focusing on streaming platforms to take advantage of the stay-at-home situation. 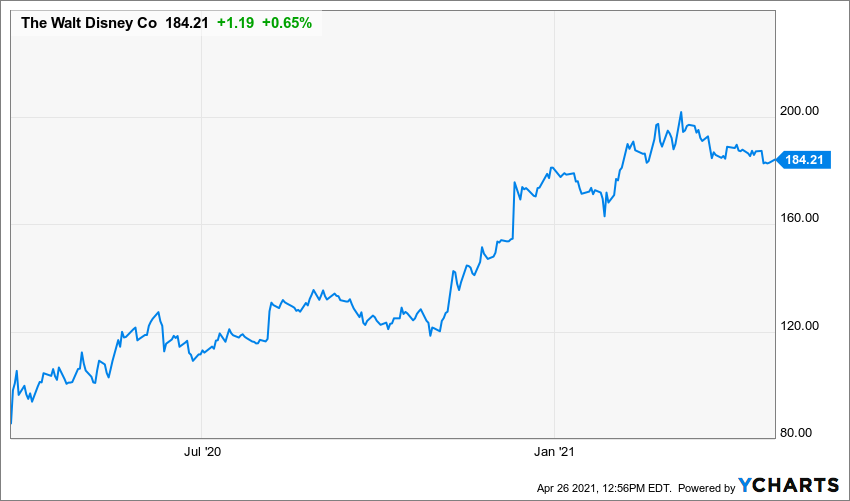 Like any investor, I’m not thrilled when a stock does spectacularly after I sell it … but context is important.

When we divest a holding from the IBP, we don’t just sit on the cash; we invest it elsewhere.

All five companies have done quite well, although only one of the group — JPMorgan Chase — has outgained DIS since the May transactions. 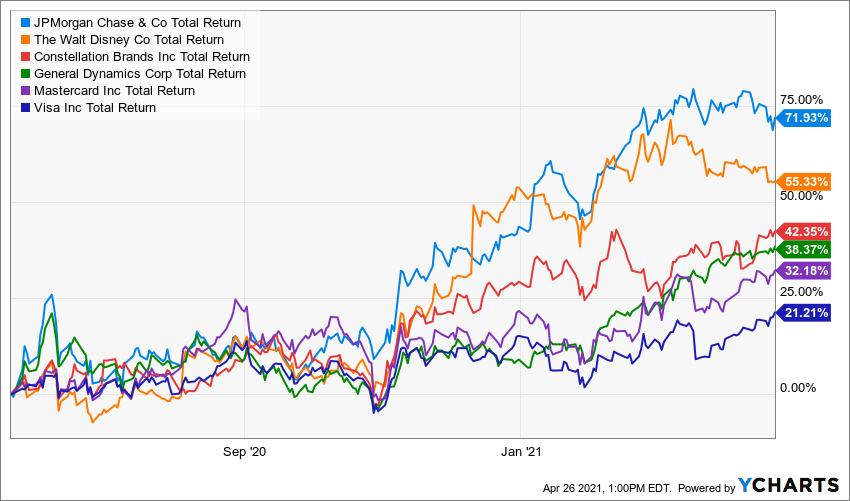 Doggone it! I should have put it all in the bank — or, more accurately, used it all to buy shares of the largest U.S. bank’s stock.

That actually was only the second of five occasions we have bought JPMorgan Chase for the IBP.

Most recently, on Monday, April 26, I executed purchase orders on Daily Trade Alert’s behalf for 3.2895 shares. We finished using the $1,000 semimonthly allocation by adding 5.2855 shares to the portfolio’s position in tobacco giant Philip Morris International (PM).

JPMorgan Chase has outperformed the S&P 500 Index over the years. A look at the following graphic shows that even if one starts the analysis just before the Great Recession — which infamously devastated bank stocks — JPM easily has beaten the index in total return. 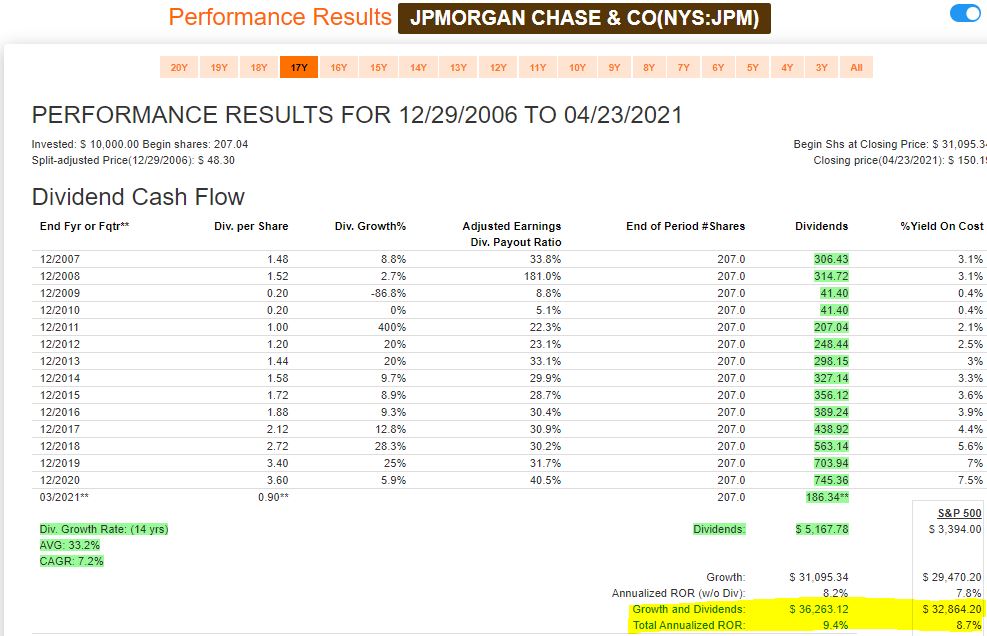 The same can’t be said of Philip Morris, which has underperformed the market since being spun off from Altria (MO) in 2008.

Many who invest in PM, however, do so for its reliable, growing dividend. Indeed, since becoming a stand-alone company, PM has produced nearly three times as much income of SPY (red-circled area below). 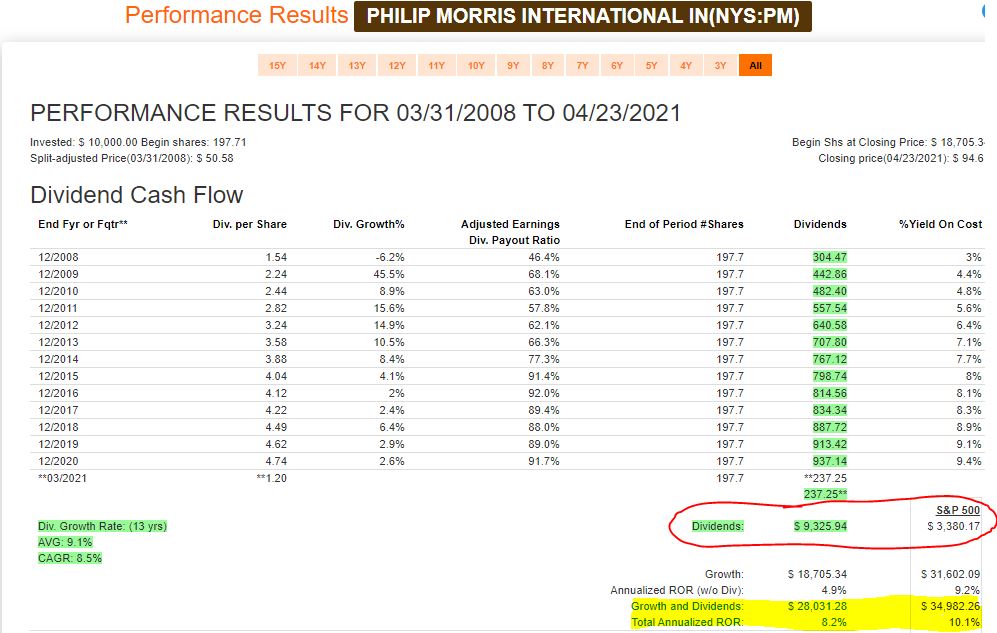 I happen to think there is room for both kinds of companies in most portfolios, especially those held by Dividend Growth Investing practitioners.

And Speaking of Dividends …

With this purchase, Philip Morris climbed to the top of the IBP’s income chart, with projected annual dividends of more than $160; JPMorgan moved into the top 20. (See all 41 positions HERE.) 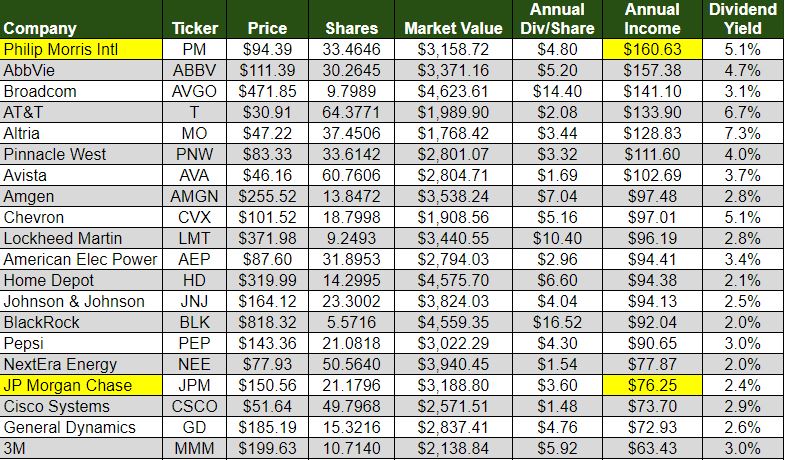 IBP rules prohibit any holding from producing more than 10% of the portfolio’s income, but even with this bump PM is at only 5.7% of the total (about $2,818).

Monday’s purchases added $37.21 to the IBP’s expected annual income production (yellow area of the table below). The two companies are projected to bring in around $237 in combined dividends over the next year (green area), about 8% of the portfolio’s total.

JPM will be making its next distribution on Friday, April 30. The ex-dividend date was three weeks ago, so the IBP will receive the .90/share payout only on the 17.8901 shares we had before this latest purchase, bringing $16.10 into the account.

PM’s next $1.20/share quarterly dividend will be in July and will generate $40.16 for the portfolio.

That income will be reinvested automatically (or “dripped”) back into each company, as outlined in the IBP Business Plan, buying another fraction of a share of each.

And both positions will continue to grow and grow, as I anticipate that each company will announce a dividend increase in the coming months. That’s how an income stream gets built, and it’s why we gave this project the name we did.

The majority of analysts seem to like both companies. JPMorgan gets either a Strong Buy or Buy rating from 20 of the 29 market-watchers surveyed by Thomson Reuters, while 15 of 20 analysts give high marks to PM.

However, there is some negative sentiment on both stocks.

For example, in the analyst graphic above, three call JPM a Sell. Meanwhile, as shown in the red-circled area of the following table, Value Line expects PM stock to be worth less 18 months from now than it is today.

JPM appears to have more analysts in its corner. Among those making the most bullish calls: Credit Suisse, Argus, Zacks and Ford Equity Research. 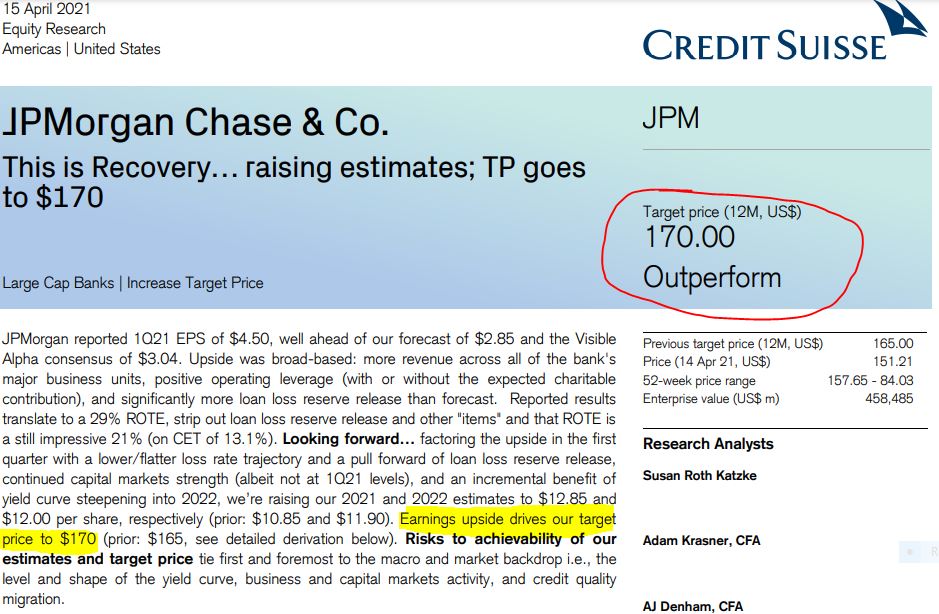 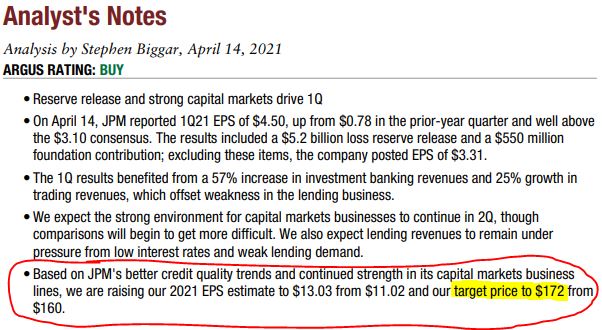 Both JPM and PM received Schwab’s highest grade (A), meaning its analysts expect each to outperform market peers over the coming year. 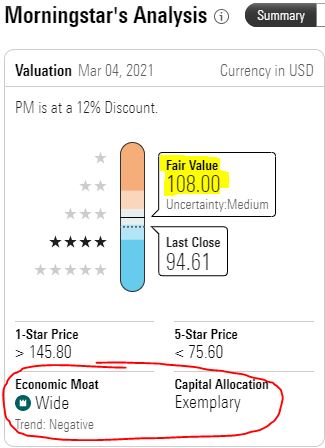 Said Gorsham: “We are raising our fair value estimate to $108 per share from $98 due to a more optimistic view of cash flows over the next five years. Our new valuation implies forward 2022 multiples of 18 times earnings per share, around 13 times EV/EBITDA, a free cash flow yield of 6%, and a dividend yield of 5%. Our valuation is at the high end of both the historical trading range of the tobacco industry and our valuation of the tobacco group because we think PMI’s leadership position in heated tobacco means it could grow not only faster than its tobacco group peers, but also faster than most multinational consumer staples manufacturers over the next three to five years.”

Morningstar puts JPMorgan Chase’s fair value at only $140, but CFRA says the company’s shares are worth about $167 apiece.

Finally, let’s take a look at the FAST Graphs illustrations for each company.

JPMorgan Chase’s blended P/E ratio is quite a bit higher than its 10-year norm, while Philip Morris is trading at almost exactly its typical ratio of the last decade. 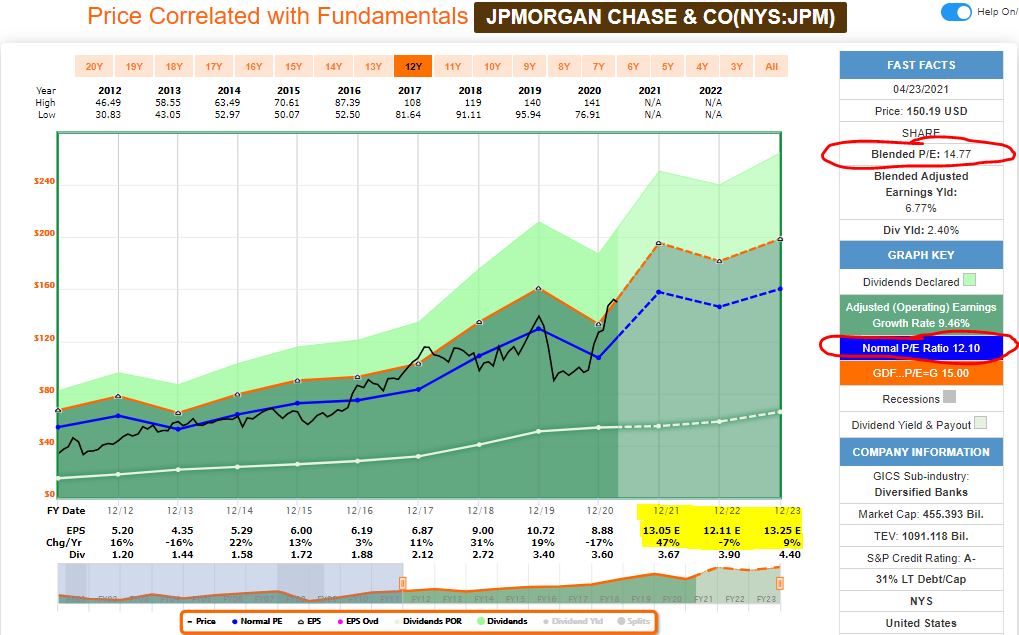 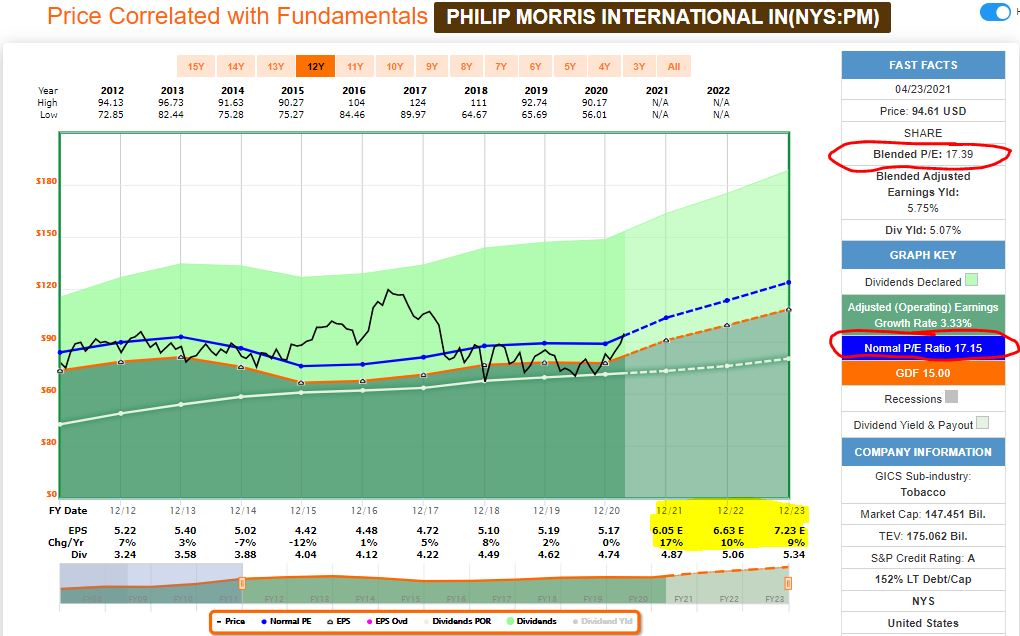 Both companies are expected to grow earnings nicely over the next few years (yellow highlight on each image).

While JPMorgan Chase’s EPS is anticipated to surge 47% in 2021, the expectations are that Philip Morris’ ascension will be more gradual.

There is a lot to like about JPM and PM, and I feel good about their place in the Income Builder Portfolio.

However, there also are enough caution signs to suggest that both companies are not for everybody, so I recommend that investors conduct due diligence before buying these or any stocks.

NOTE: The IBP is one of two real-money portfolios I manage for this site. The other is my “growth and income” Grand-Twins College Fund, which includes the likes of DraftKings (DKNG), Alphabet (GOOGL), Texas Instruments (TXN) and Zoetis (ZTS). My next update is scheduled to be published on May 4; until then, be sure to check out the GTCF home page HERE.