When it comes to investing, what passes off as “big news” often is merely big noise.

One example: JPMorgan Chase (JPM) and its recent dalliance with what was supposed to be an elite European soccer league. 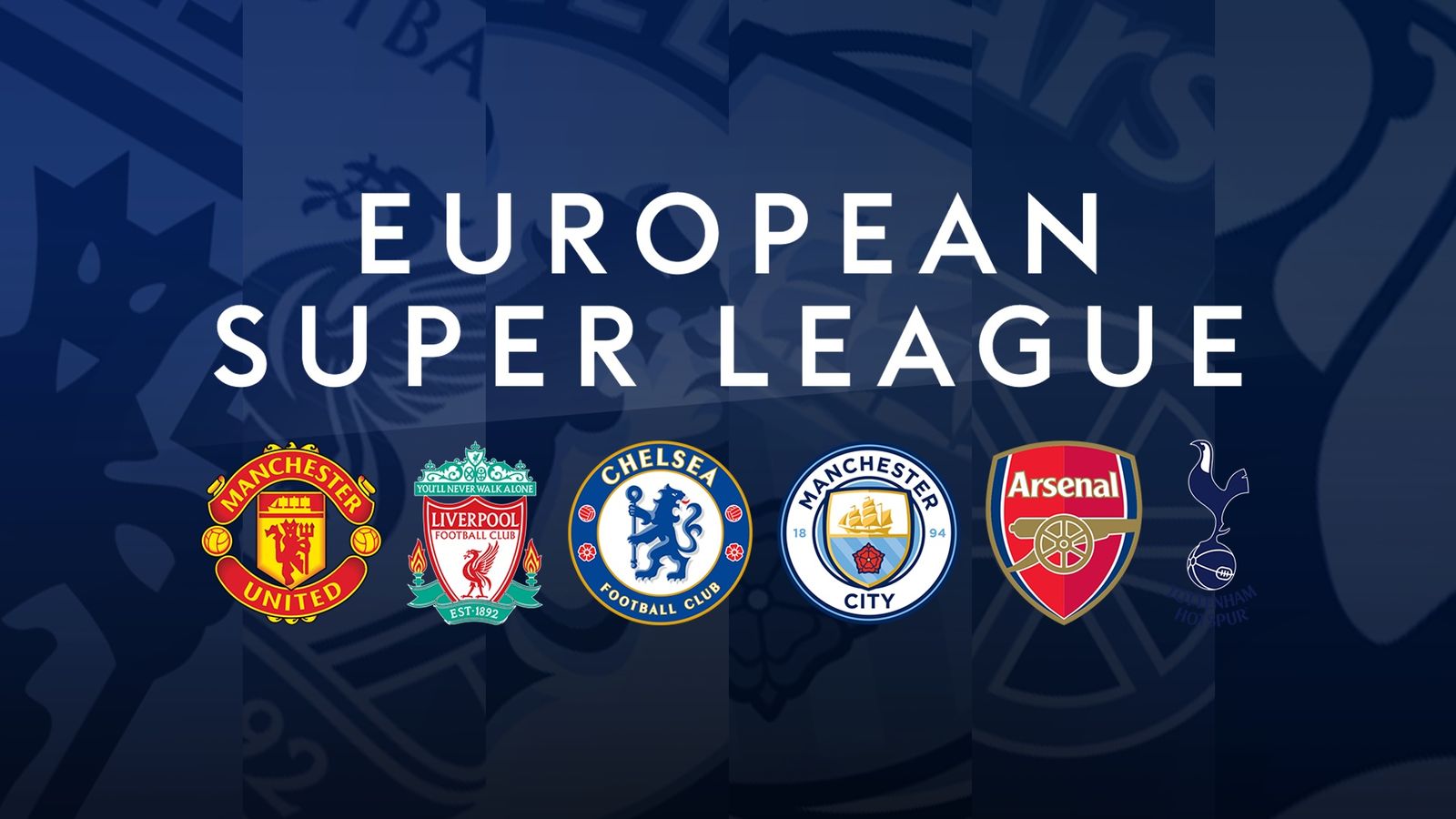 America’s largest bank had pledged about $4 billion to underwrite the new venture … but the league collapsed only two days after it was announced, as a fan revolt led numerous clubs to change their minds.

The situation created a little embarrassment at JPMorgan Chase, with a spokesperson saying they had “clearly misjudged how this deal would be viewed by the wider football community.”

However, JPM co-president Daniel Pinto pointed out that the bank lost no money because the deal was voided, and he told Bloomberg TV: “We arranged a loan for a client. It’s not our place to decide what is the optimal way for football to operate in Europe and the U.K.”

In other words, it was a big stink for European futbol fans, but ultimately a whole lot of nothing for JPM.

Philip Morris International (PM), meanwhile, has been mentioned in reports about the Biden Administration’s proposal to reduce nicotine content and eliminate menthol in cigarettes. 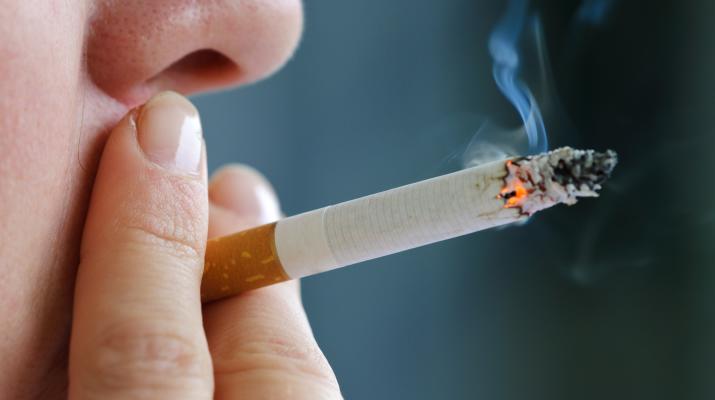 If such regulation passes, it would make things more difficult for tobacco companies.

However, PM is the international arm of Altria (MO) and is less affected by U.S. government restrictions. And similar threats have been made for years, regardless of president or party.

Whenever possible, I try to tune out the noise and focus on earnings, revenue, fundamentals, growth and guidance — so I have decided to add onto the Income Builder Portfolio’s existing positions in Philip Morris and JPMorgan Chase.

Our initial purchase of each company came only two weeks apart in Sept. 2019 (see that Philip Morris buy HERE and the JPMorgan buy HERE.) Since then, all in the last 12 months, we have made three relatively small additions to our JPM stake (HERE, HERE and HERE), and one more PM buy (HERE).

Both companies presented stellar earnings reports earlier this month, with JPMorgan offering this on April 14: 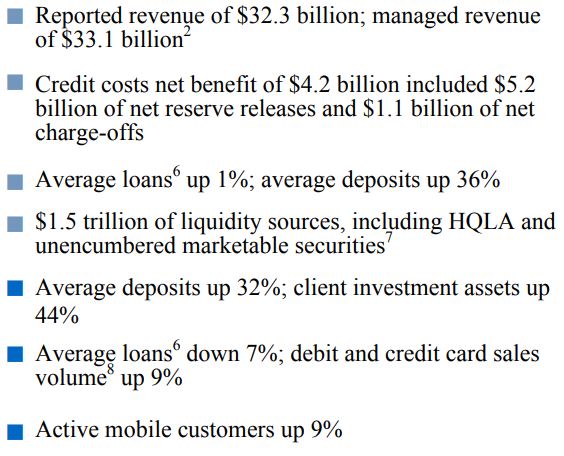 CEO Jamie Dimon is bullish on the U.S. economy and therefore believes investors should be bullish on his company:

“With all of the stimulus spending, potential infrastructure spending, continued Quantitative Easing, strong consumer and business balance sheets and euphoria around the potential end of the pandemic, we believe that the economy has the potential to have extremely robust, multi-year growth. This growth can benefit all Americans, particularly those who suffered the most during this pandemic.”

JPMorgan Chase already had come out of last year’s “coronavirus crash” with a vengeance, easily outperforming the S&P 500 Index. 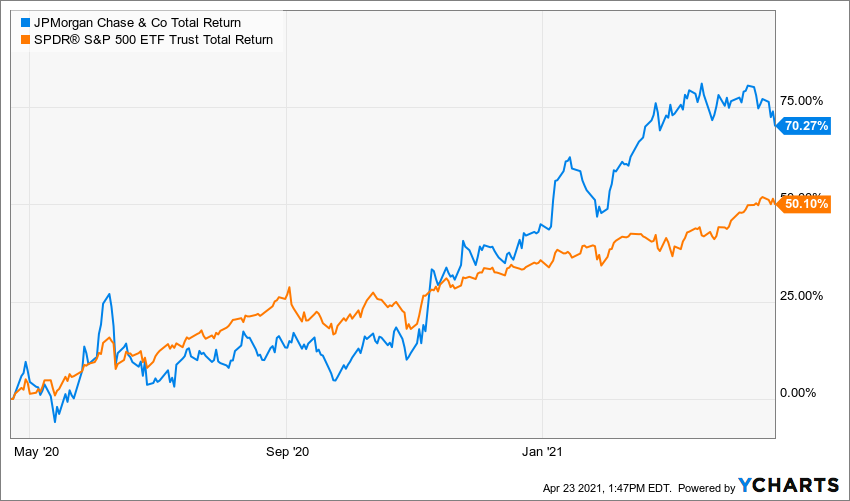 And here’s another benefit related to all the optimism: JPM soon can get back to raising its dividend.

The Federal Reserve had prevented banks from increasing dividends and buying back shares during the pandemic; those restrictions are scheduled to end on June 30.

JPMorgan Chase’s quarterly dividend has been stuck at 90 cents/share since a 12.5% raise back in Q3 2019. But the company had been generous to shareholders before that, and there is every reason to believe it will be generous again.

The following chart shows how JPM’s annual dividend is more than double what it had been before its Great Recession-induced cuts in 2009-10: 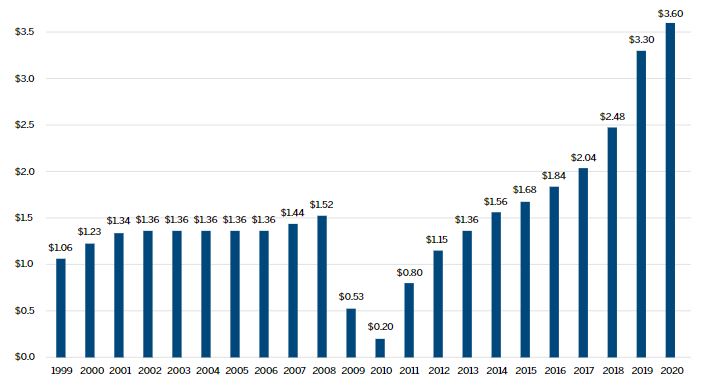 The last time Fed anti-dividend-raise rules expired — in 2011, coming out of the recession — JPM quadrupled its payout.

I wouldn’t expect that this time, but a double-digit-percentage hike is certainly possible.

As For Philip Morris …

PM continues to show great resilience — recently in the face of the pandemic, and longer-term in dealing with declining cigarette use.

During its April 20 earnings presentation, the company revealed a 21.5% increase in adjusted diluted EPS, 2.9% growth in net revenue, and a 6.9% advance in net revenue per unit.

The following slide shows how usage of its heated-tobacco product, IQOS, has grown exponentially.

I already have written at length about Philip Morris’ aggressive move away from cigarettes and toward IQOS (HERE), so it wasn’t surprising to see that the product now comprises 13% of the company’s shipment volume. That’s nearly triple what it was only three years ago.

Under current market conditions, heatsticks, the cigarette-like sticks that are used in the iQOS device, are generally taxed at lower rates than cigarettes. The economics of the distribution of heatsticks, therefore, is highly favorable to the manufacturer. Net revenue per pack is 2.4 times that of a pack of cigarettes, and the gross margin is a whopping 10 percentage points higher than cigarettes, at about 75%.

And judging from PM’s guidance, its leadership doesn’t seem particularly fazed by the threat of more regulation in the United States. 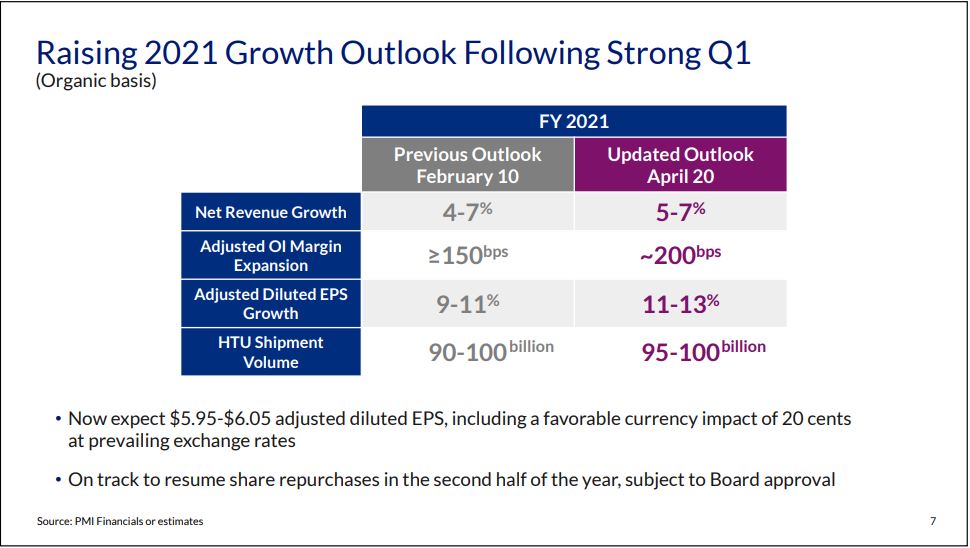 At about 5%, Philip Morris is one of the Income Builder Portfolio’s highest yielders.

CEO Andre Calantzopoulos has spoken often of the company’s commitment to its dividend, which has a half-century legacy of growth from its time as part of Altria.

Although PM’s raises in recent years have tended to be in the slow-and-steady category, as illustrated in the graphic below, perhaps the good earnings growth will result in a more robust hike this fall.

Ignoring the noise and focusing on what really matters to me as an investor, it seems pretty clear that JPMorgan Chase and Philip Morris are high-quality operations.

That’s why JPM and PM already were part of the Income Builder Portfolio, and that’s why I’m glad to add to our stakes. (See all 41 IBP positions on our home page HERE.)

In my post-buy article, scheduled to be published on Tuesday, April 27, I will present valuation details and other relevant information about both companies.

Investors are urged to conduct their own thorough due diligence before buying any stocks.