Here’s the kind of advice you usually don’t see at the start of an investing article:

If you plan to drop serious scratch on a stock, you might want to look elsewhere.

I am not saying these are bad companies. Indeed, I think they are darn good businesses. But none really offers the kind of compelling value that would make me want to buy in bulk right now.

For our Income Builder Portfolio, however, we do not make large, one-off buys. We are gradually putting together the IBP over time through $1,000 semimonthly investments.

It was our second buy of each, with the first coming earlier this year.

Obviously, I would always rather get a great deal on every stock.

Nevertheless, if I’m only putting about $250 into a position that I plan to build over many years, I am not going to be obsessed with valuation.

The following table looks at how various analytical firms assess our four most recent buys:

Because green means “go,” I use that color to highlight an analyst’s view that a company is at an attractive value point. Blue is less so, followed by that orangey-yellow tone.

Morningstar’s analysts don’t consider any of the companies to be an especially good value today.

Still, Northrop Grumman does appear to be fairly valued if one looks at the entirety of the analyst calls — with a few indicating that they wouldn’t hesitate to buy here.

For example, CFRA says Northrop could experience 33% price appreciation over the next 12 months, and Value Line says the upside for NOC is as much as 64% over the next 3-5 years.

All 7 analysts TipRanks polled about Northrop call it a “Strong Buy,” with even the lowest price target ($350) being higher than the current price of NOC.

Utilities tend to grow more slowly than companies in other sectors, and LNT has by far the highest yield of these four, which would make it more attractive to income-centric investors.

And then there’s Costco.

Despite an astronomical multiple — 36 times projected 2021 earnings — 22 of 33 analysts tracked by Reuters rate the warehouse retailer at either “Buy” or “Outperform.”

As is often the case with a high-quality company like Costco that almost always trades at a premium, those who want to own shares are going to have to pay up.

The same is true of Sherwin-Williams, which is trading near 30 times forward earnings. Even with that lofty valuation, 17 of the 29 analysts polled by Thomson Reuters call SHW either a “Strong Buy” or “Buy.”

Here’s an interesting look at various valuation metrics from Simply Safe Dividends, which concludes that Costco is the only truly overvalued company of the four: 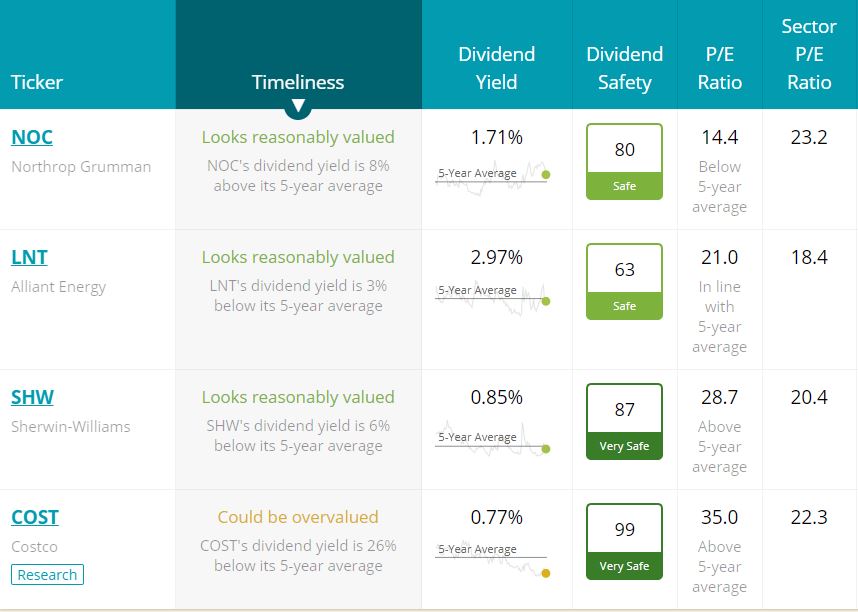 In the first, a 10-year earnings picture makes it quite clear that COST is historically overvalued, with the current blended P/E ratio of 37.47 being well above the 28.75 norm. So even though earnings growth is expected to average a healthy 9% annually over the next three years (yellow highlight), COST is still looking pricey. 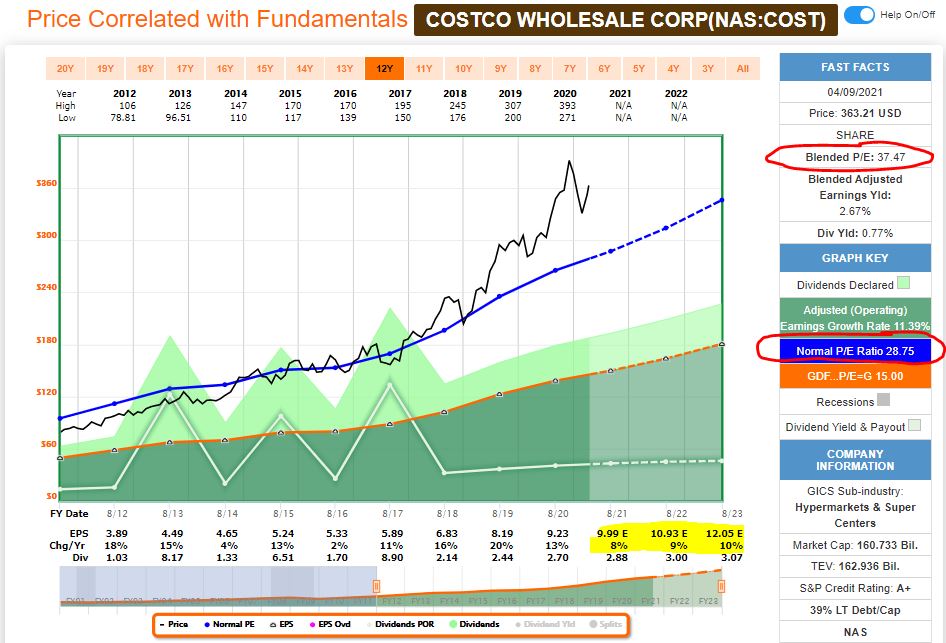 With the second FAST Graphs image, however, COST actually seems decently valued when free cash flow is the metric of choice. 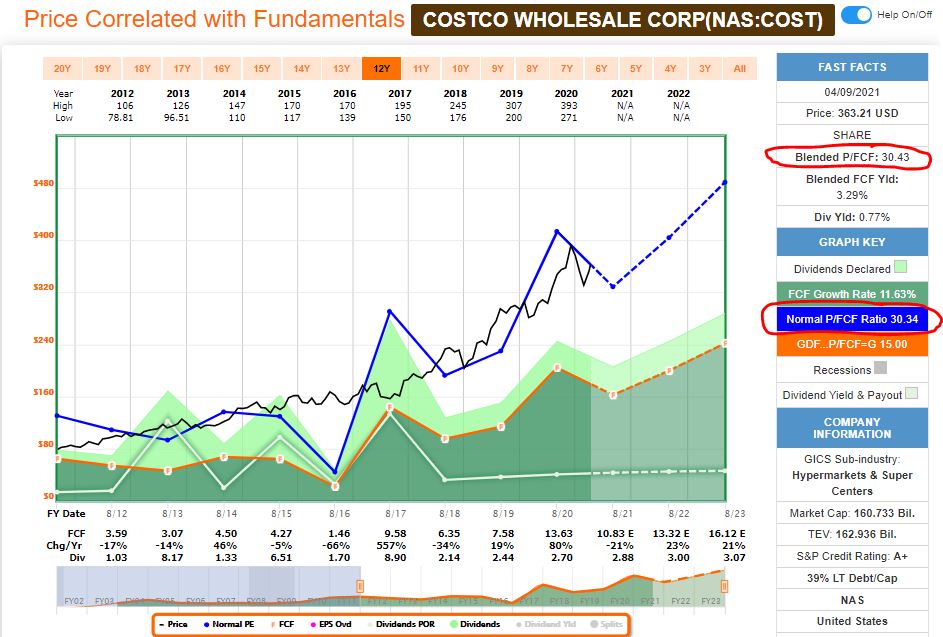 All of the above illustrates why I like to give readers a lot of different ways to look at a company’s valuation.

What I might consider extremely overvalued, another investor might say, “Actually, not too shabby” — or vice versa.

In my previous article, I discussed several reasons why I selected SHW, COST, NOC and LNT for this $1,000 allocation — and those companies’ reliably growing dividends ranked pretty high on the list. 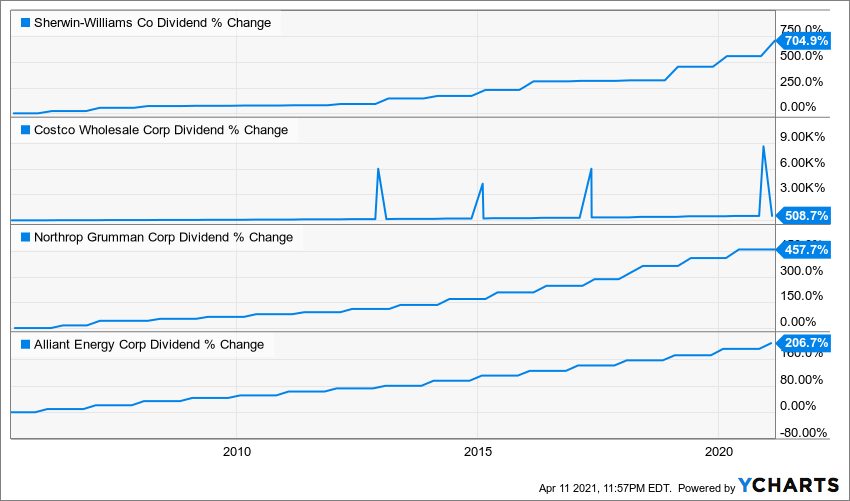 The spikes for Costco were due to the company paying 4 special dividends over the last decade.

Monday’s purchases added $15.76 to the IBP’s expected annual income production (yellow area of the table below). The four companies will combine to bring in around $85 in dividends over the next year (green area), about 3% of the portfolio’s total.

The actual totals will end up being a little higher because Costco is expected to announce a raise in the next couple of weeks. COST has averaged 13% dividend growth over the last decade, but last year’s hike was 7.7%; I would expect an increase at least that large this time around.

The first of the four to give the IBP a payday will be Alliant, which usually makes a distribution in mid-May.

Our 24.6104-share position will generate a quarterly dividend of $9.91 — which, per portfolio rules, will be automatically reinvested to buy another fraction of an LNT share.

That situation will repeat every quarter, not just with Alliant but with all 41 IBP positions (see the entire portfolio HERE). That’s how an income stream gets built!

I wouldn’t blame a person who usually invests thousands of dollars at a time for reading this article and concluding, “Nope, too expensive.”

Then again, when dealing with strong companies that have performed superbly in a bull market, valuations will be elevated. And Costco, Northrop Grumman, Sherwin-Williams and Alliant Energy certainly have been wonderful performers.

With the Income Builder Portfolio, the idea is to keep acquiring pieces of great businesses via regular, smaller buys — as is the case for so many retail investors, especially those in the relatively early stages of their investing lives.

Sometimes prices will be higher, and sometimes they will be lower … and years from now, the portfolio will be a beautiful thing to behold.