The rarest bear in the world is said to be the Gobi Bear, as there are believed to be only a few dozen remaining in Mongolia’s desertlands. 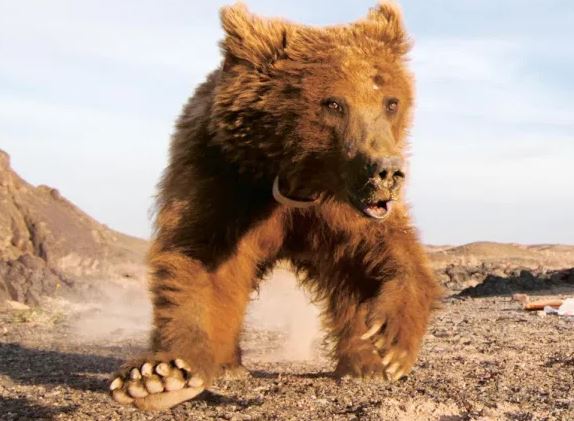 I actually had trouble finding a single analyst who was down on any of those three giant beasts of their industries.

For example, TipRanks surveyed 31 analysts … and all 31 rated Amazon a “buy,” with an average 12-month target price that represents some 30% upside.

Meanwhile, Thomson Reuters polled 43 analysts about Alphabet, and 41 called Google’s parent company either a “strong buy” or “buy.” (The other 2 say “hold.”)

The same was true for Microsoft. Indeed, when one combines the calls cited by TipRanks, 85 of 85 analysts rated AMZN, GOOGL and MSFT as “buys.”

As you can see in the far right column of the table above, a few analysts surveyed by Thomson Reuters did issue “hold” ratings. The nerve of them!

Now, analysts make plenty of miscalculations, so I don’t treat what they say as gospel but rather as just one of the many things I look at when researching potential buys.

For March, I added to the AMZN, GOOGL and MSFT positions in my Grand-Twins College Fund, and also increased the size of the Apple (AAPL) stake.

Analysts weren’t as universally giddy about Apple, with a few even saying shareholders should consider selling the world’s largest corporation, but overall they were bullish on AAPL, too.

One thing for sure: My grand-twins Jack and Logan (and their parents) will be happy to receive the assistance with their college costs that these and other GTCF holdings will provide years from now. 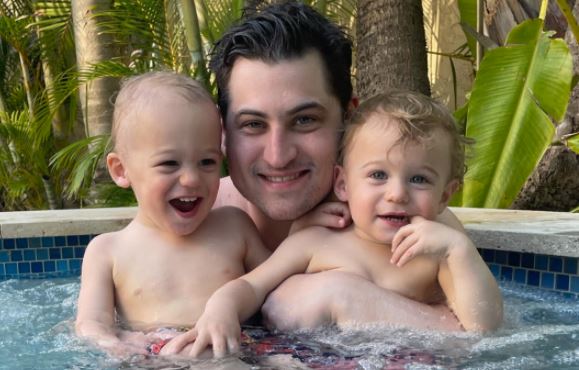 My son, Ben, holds Jack and Logan in the pool during a March vacation in Florida

Since launching the GTCF last June, the portfolio has experienced very nice total return of about 18%. 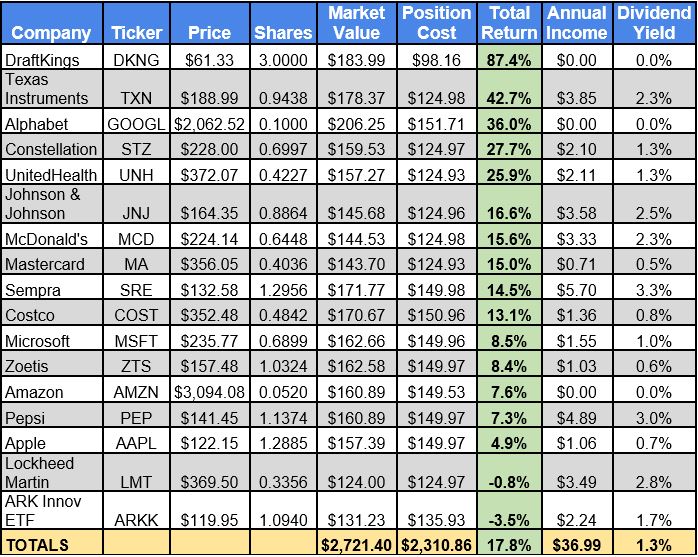 The above table is updated constantly on our GTCF home page (HERE), which also includes links to every article I’ve written about the portfolio.

Of the two underwater holdings — Lockheed Martin (LMT) and ARK Innovation ETF (ARKK) — the latter lost ground in March while the former had its second consecutive winning month.

While ARKK, the exchange-traded fund filled with “disruptive” companies, was the GTCF’s worst performer of the month, weapons-maker LMT saw a strong 13% total return.

The 13 positions in which there were no new investments (other than dividend reinvestment) in March combined for a nearly 6% total return.

That month-over-month showing was triple the 2% turned in by the S&P 500, and also superior to the other major indexes. 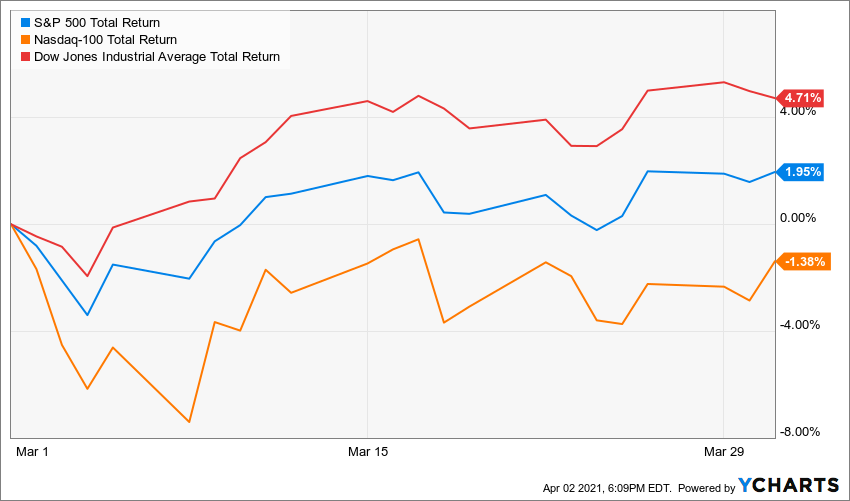 After having been beaten down earlier in the year, utilities rallied strongly in March. The GTCF’s lone holding in that sector, Sempra Energy (SRE), paced the portfolio with 14% total return.

The Grand-Twins College Fund is a “growth and income” portfolio. Although the emphasis is on growth, I still appreciate companies that pay reliable, increasing dividends.

Seven GTCF components paid dividends in March, and the nearly $5 they generated was used to buy fractions of additional shares in each position. 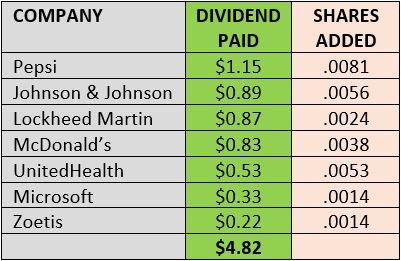 Though $4.82 isn’t enough to buy a beer at most tap rooms, it represents the GTCF’s best month yet for regular dividends received.

It’s 42% more than the same seven positions paid out in regular distributions in December; Costco (COST) did pay a special dividend that month.

So while we’re not talking about much dough, one can see how the income compounds when dividends are reinvested. Over time, despite its relatively low yield (1.3%), I expect the portfolio to produce a useful income stream.

There were no dividend hikes within the GTCF in March, but this month income-producing stalwart Johnson & Johnson (JNJ) is expected to increase its payout for the 59th consecutive year. Apple also is likely to raise its dividend in either late April or early May.

This probably will not come across as a revelation to anybody, but the four stocks I bought for the GTCF in March rank among the highest-quality companies out there.

Despite the premium prices all four companies typically command, one still could argue that, from a valuation standpoint, now is an A-OK time to buy them.

Price is at market close 3/31/21 … Forward P/E ratio is consensus as provided by Morningstar … Morningstar is that analytical site’s current “Fair Value Estimate” for each stock … The others are 12-month target prices by various analytical sites, though Zacks is 6-12 months and Value Line is the midpoint of that site’s 18-month target range.

All of the P/E ratios are quite high, but then again they have been for years on these.

The analysts at Zacks are the closest to “lukewarm” on the group. Other less-than-bullish takes include Morningstar calling Apple overvalued, and Value Line seeing little upside for Alphabet.

Interestingly, Alphabet is one of the favorites of all the other analysts, including those that I presented earlier from TipRanks. Morningstar, normally pretty conservative in its fair value estimates, says GOOGL was more than 20% undervalued as of March 31.

I own all four companies in my personal portfolio, and I bought shares in each of the world’s only four trillion-dollar companies earlier this year — Amazon and Alphabet as recently as last month. 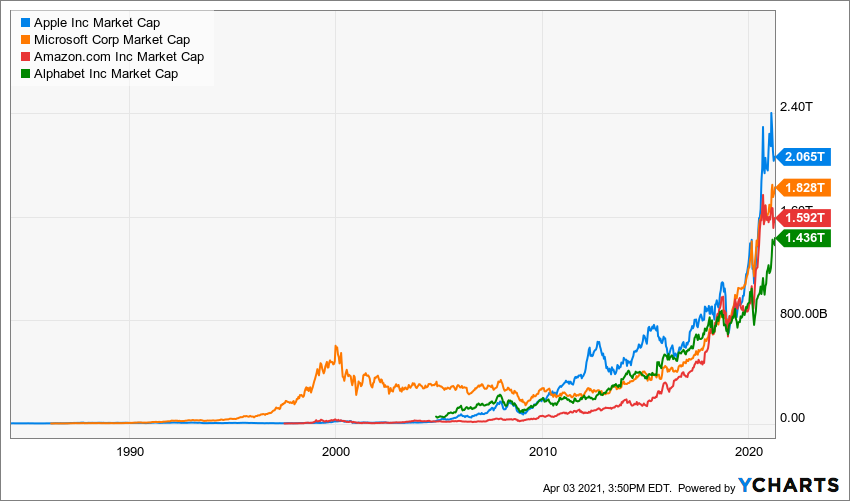 When talking casually about these companies, I call them all “tech stocks.”

Officially, Alphabet is in the Communications sector and Amazon is in Consumer Discretionary … but let’s be real. These are technologically innovative companies that have been dazzling consumers and investors for years.

The Grand-Twins College Fund’s stakes in AMZN, GOOGL, MSFT and AAPL are still very small. By the time Logan and Jack are ready for college, however, these and the rest of the portfolio’s holdings will have grown nicely … just as their recipients will have. 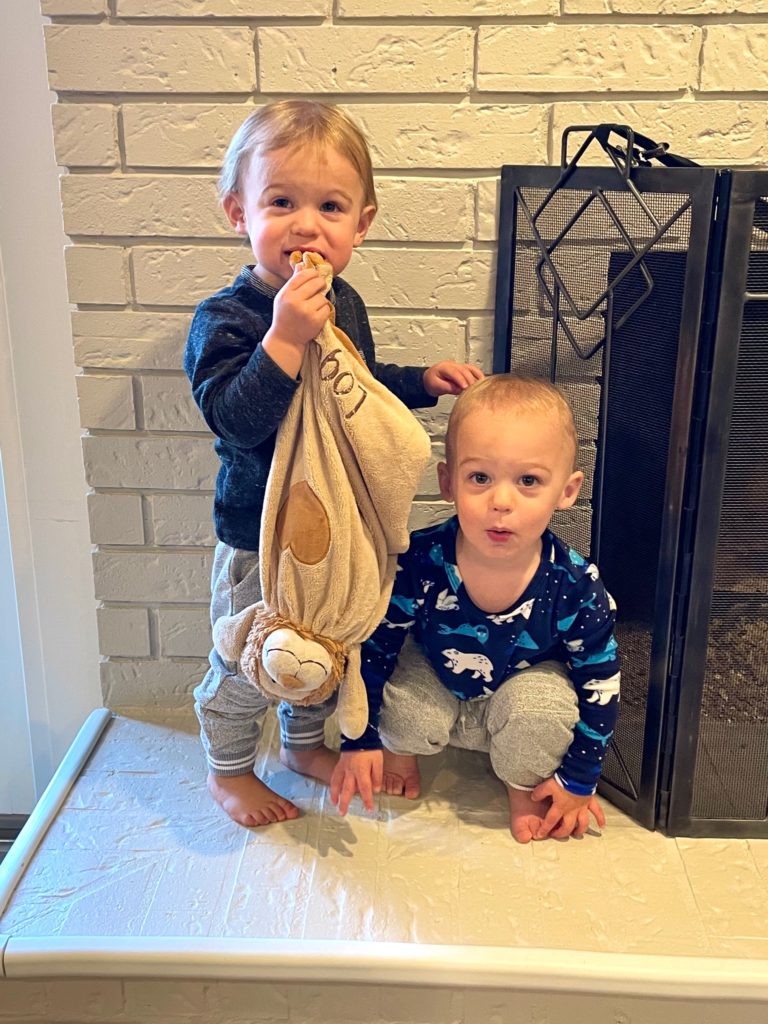 Note: The other real-money project I manage for this site, the Income Builder Portfolio, also owns AAPL and MSFT. My next stock pick for the IBP will be revealed in an article scheduled to be published on April 10. Until then, you can see the entire 41-stock portfolio HERE.