When you are interested in owning stock in an outstanding — but probably overvalued — company, what do you do?

Some would argue 100% of the time that you should wait and let the price come back to you.

To do so, you must be content knowing you might never own a piece of that company.

Over the years, I have passed on many stocks due to overvaluation; usually I’m happy I didn’t “overpay” for them, but occasionally I’ve regretted missing out.

For the longest time, Costco (COST) was in that latter category for me.

I kept waiting, but my price never came. I finally decided to pay the premium but got antsy when the price ran up, and I was happy to sell for a relatively quick 44% profit in March 2019.

In the two years since then, however, COST has experienced a market-beating total return of about 50%. Nice job selling, knucklehead!

A modest pullback in COST’s price this year seduced me again, and I gave into temptation by making some small purchases. Most recently, I bought a few more shares last week at $323 apiece.

I am taking these bites of COST knowing that it’s unlikely I’ll see the meteoric price appreciation of the past several years; I’m just glad to have a small stake in a great company, and I am looking for nice long-term performance.

With that in mind, I also decided to add Costco to DTA’s Income Builder Portfolio.

On Monday, March 22, I executed a purchase order on Daily Trade Alert’s behalf for about $1,000 worth of the indomitable warehouse retailer.

COST becomes the portfolio’s 41st position. (See them all, as well as links to my IBP articles HERE.)

It is our second big-box retailer, joining Home Depot (HD), but our first general retailer.

Costco is the IBP’s 7th holding in the Consumer Staples sector, which makes up about 13% of the portfolio. Only Information Technology (21%) and Healthcare (15%) are better represented. 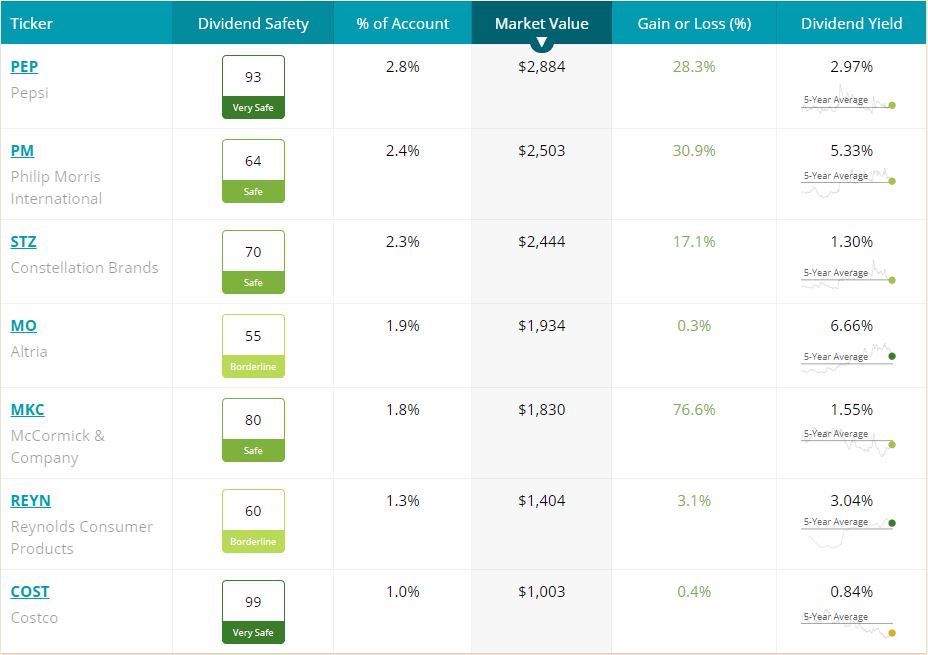 Valuation: How Costly Is Costco?

Costco is trading at about 33 times this year’s projected earnings. Even if profits grow an average of about 10% annually, as expected, the $333 we paid is 27.5 times forecasts for 2023.

Nevertheless, this is such a high-quality business and such a proven performer — as I discussed at length in my previous article — COST still is worthy of investors’ consideration. 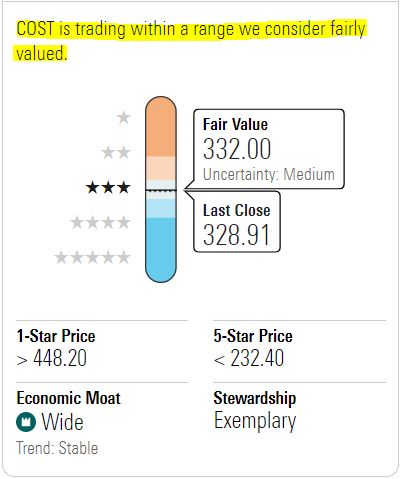 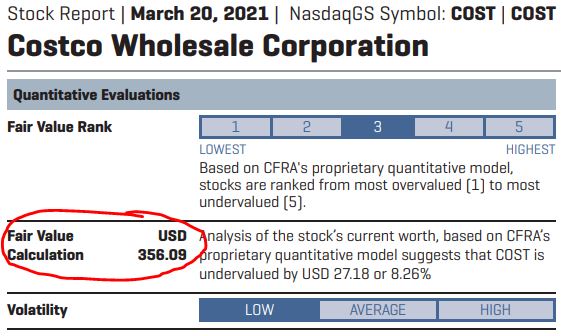 And analysts are quite bullish on the company’s near-term and long-term prospects.

Of 18 surveyed by TipRanks, 13 are calling COST a Buy, and their consensus 12-month price target suggests 13% upside from here.

The story is similar for the 34 analysts polled by Thomson Reuters, with 24 giving COST either a Strong Buy or Buy rating.

Value Line just added COST to its model portfolio of “Stocks With Above-Average Year-Ahead Price Potential,” so it’s not surprising to see analysts there projecting good performance: $408 is the midpoint of their 18-month price range; and their 3-5 year target predicts longer-term gains of as much as 50%.

Using different time periods and metrics, one can get a lot of interesting valuation information about Costco from FAST Graphs.

Looking at the 20-year, adjusted-earnings back-test, COST certainly appears to be extremely overvalued — the blended P/E ratio of 34.07 is well above the 25.41 norm. 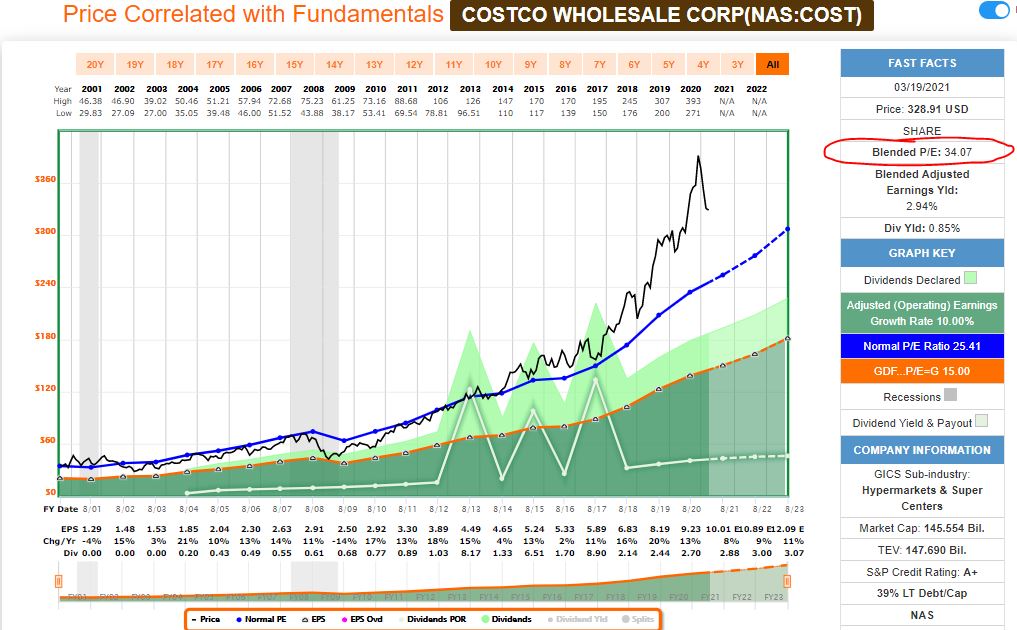 The blue line on the above graph represents the normal P/E ratio for the period; the black price line stayed very close to that this century’s first 14-15 years.

After that, Costco’s price remained fairly close to the blue line for a few more years before taking off in late 2017, and the P/E ratio has been well above 30 most of the time since.

But some investors prefer not to look back so far, as the world — and the market — has changed a lot in the last two decades. Using a 6-year time frame instead, a 34 blended P/E ratio doesn’t seem so outrageous. 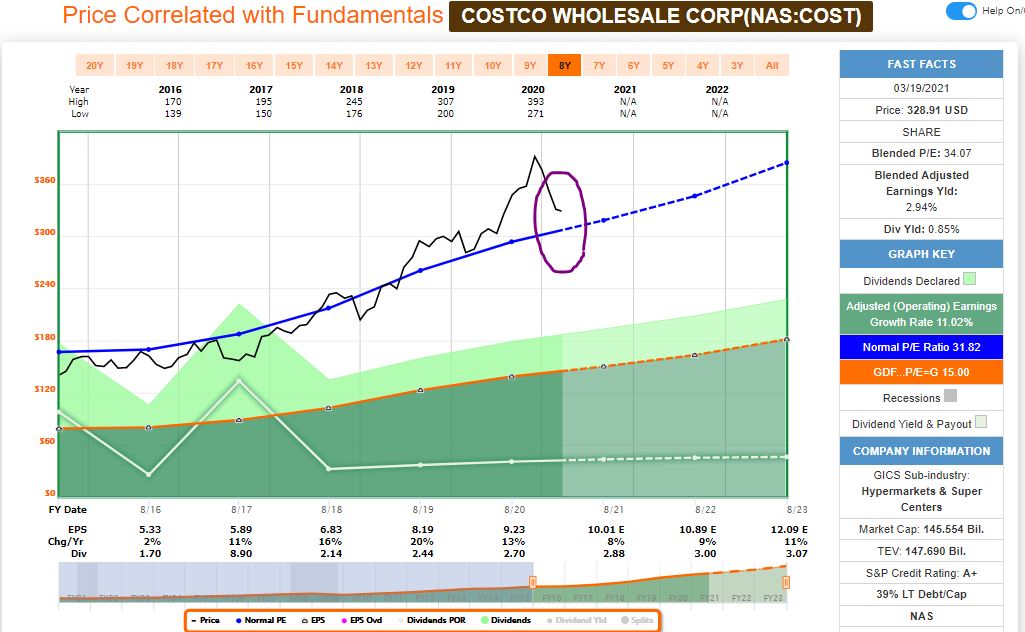 And finally, because Costco is a great cash-generating machine, let’s use free cash flow as another valuation metric.

The company’s current blended P/FCF ratio of 23.82 is well below the 10-year norm of 30.34. So by this measure, COST actually looks undervalued.

Taking in all the information available to me, I obviously don’t think COST is a bargain. But it is within a valuation range I am comfortable with, especially when talking about such a high-quality operation.

Still, it would be foolish to criticize investors who would prefer a larger margin of safety and who will wait to buy COST at a lower price (or not at all).

At 0.9%, COST is one of the lowest-yielding companies in the Income Builder Portfolio.

It nonetheless is a dividend growth stock, having increased its annual payout for 16 consecutive years. Most of the raises have been by double-digit percentages.

The following graphic from Simply Safe Dividends doesn’t show the four special dividends Costco has paid in the past decade: $7 per share in 2012, $5 in 2015, $7 in 2017, and $10 this past December. I never count on a special divvy, but I’m always delighted to get one. 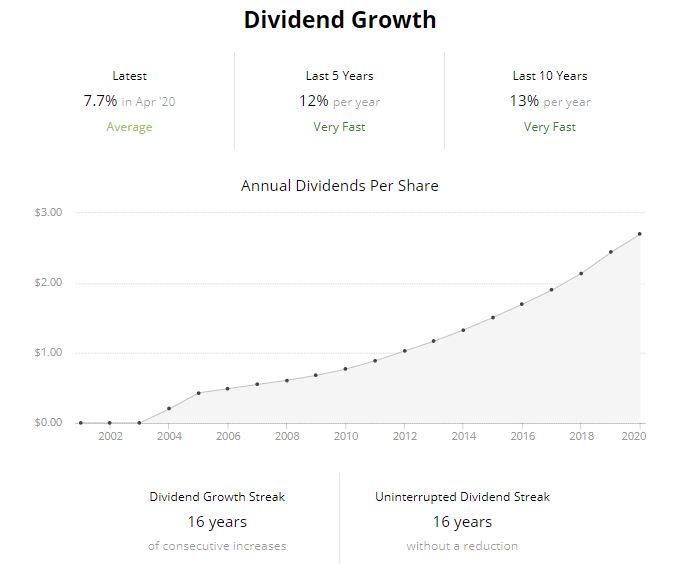 Costco routinely announces its annual dividend increase each April. I like to be conservative in my projections, so I’ll figure a 7% boost to .75/quarter.

In that case, our 3-share position would generate $2.25 in income, and that would be reinvested automatically (as per IBP rules) to buy an additional fraction of a share of COST.

That process will be repeated every quarter, not just with Costco but with every stock we own. No wonder we’ve given this project such a clever (and accurate) name.

There are so many reasons to like Costco as a business. In addition to those I mentioned in my previous article, here are a few others:

Is COST stock pricey? Well, it sure isn’t cheap. But as a long-term investment gradually acquired via regular purchases over many years, I think Costco will prove to be a valuable part of the Income Builder Portfolio.

Note: COST also is held in the other public portfolio I manage for this site, the growth-and-income Grand-Twins College Fund. My next GTCF update will be published in early April. Until then, check out its home page HERE.