My daughter, Katie, has made some very good choices in her life.

She decided to play basketball and got a lot of joy out of the sport; she selected a fine college, Lawrence University; the dog she adopted, Baxter, was a wonderful companion for 10 years; Katie moved to Seattle despite knowing nobody there, and she has grown to love the Pacific Northwest.

And rather than waste money on crud she didn’t need, she started investing early in life — first with mutual funds in her 401(k) plan, and then with individual stocks.

Her first stock purchase has grown to be her largest position: Starbucks (SBUX). She worked for the company for many years, rising in the ranks from barista to management.

Now a loan manager with Guild Mortgage, Katie also has done well investing some of the world’s most recognizable brands — her 13-stock portfolio has experienced a total return of nearly 100%. 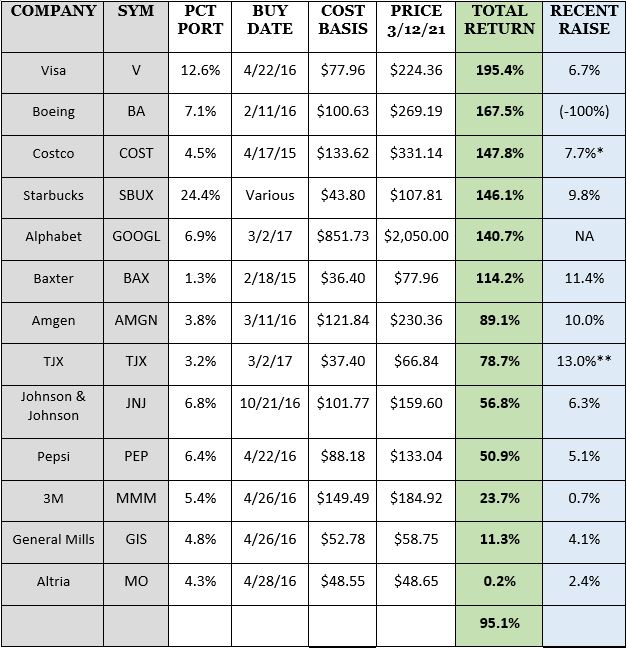 And then there is her best decision: dating and eventually falling for her now-husband, Ben, an intelligent, patient, hard-working, selfless guy with a great sense of humor.

When I wrote about Katie and her investments back in January 2018, she and Ben had just gotten married. So much has happened since — most notably, the October 2020 birth of their son, Owen. 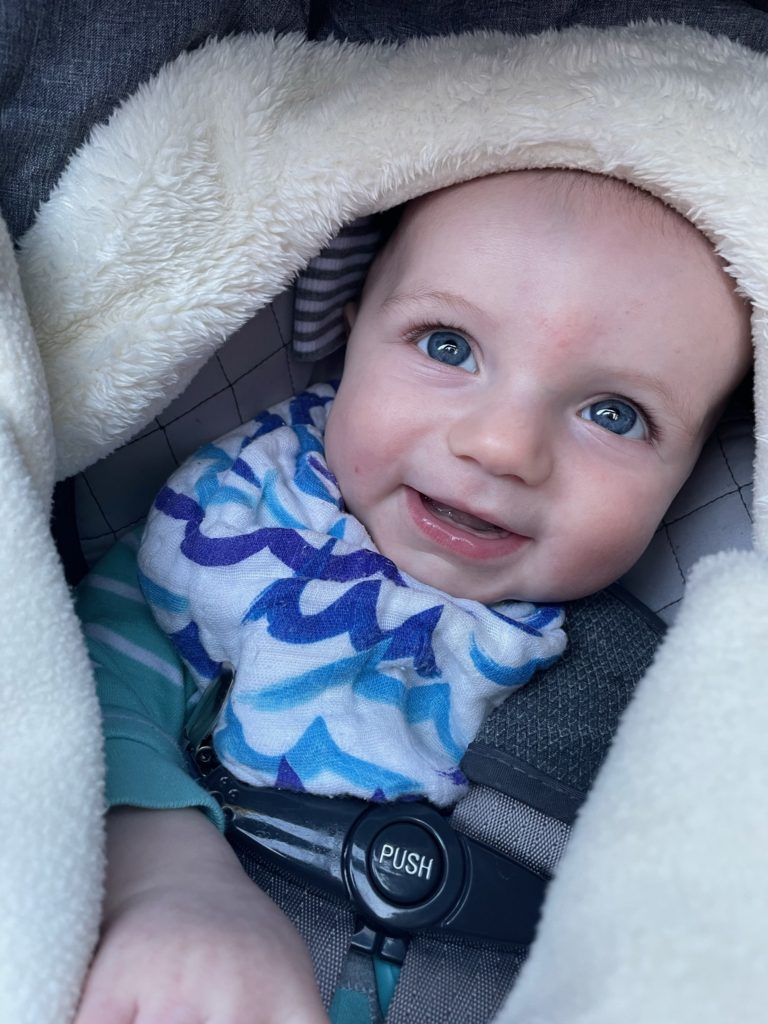 Like any dad, I want my daughter to have a good “financial partner,” too. In that department, Katie really scored.

Before leaving just last month to work for Unity Software (U), Ben spent more than a decade with Microsoft (MSFT) as a software engineer.

Early on, he began buying shares of MSFT at a 10% discount through the company’s employee stock plan; Microsoft also routinely distributed its stock as rewards.

While MSFT is by far Ben’s largest holding, he also has invested regularly in other stocks and mutual funds. He especially likes tech stocks, building nice positions in Tesla (TSLA), Netflix (NFLX) and Apple (AAPL).

Here’s a breakdown of Katie and Ben’s combined portfolio: 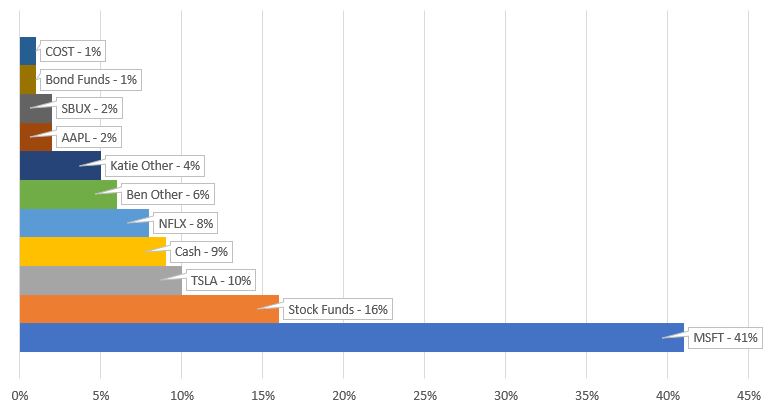 I manage two real-money public portfolios for this site: the Income Builder Portfolio and the Grand-Twins College Fund. Each aims to present interesting companies for further research, to discuss portfolio-building concepts, and to encourage relative newcomers to prioritize investing.

Similarly, I didn’t write this article to brag about two of my favorite Millennials; I did it to show what young adults can achieve if they are committed to investing early and often.

Ben and Katie are off to a tremendous start, so let’s take a look at a few of their investments …

Too Much Of A Good Thing?

Ben asked me a couple years ago if I thought he owned too much Microsoft stock.

I told him that a lot of financial planners certainly would say so. But I also said that MSFT is one of my favorite companies, that selling is one of my least favorite things to do, and that I like to let my winners run.

Reminding him that I am not a professional adviser, I said he needed to do what he felt was best for himself because, “I’m not gonna cover any losses if you hold and MSFT bombs, or make you whole if you sell and MSFT soars.”

Ultimately, Ben was comfortable keeping most of his MSFT, and to date that’s been a superb call. 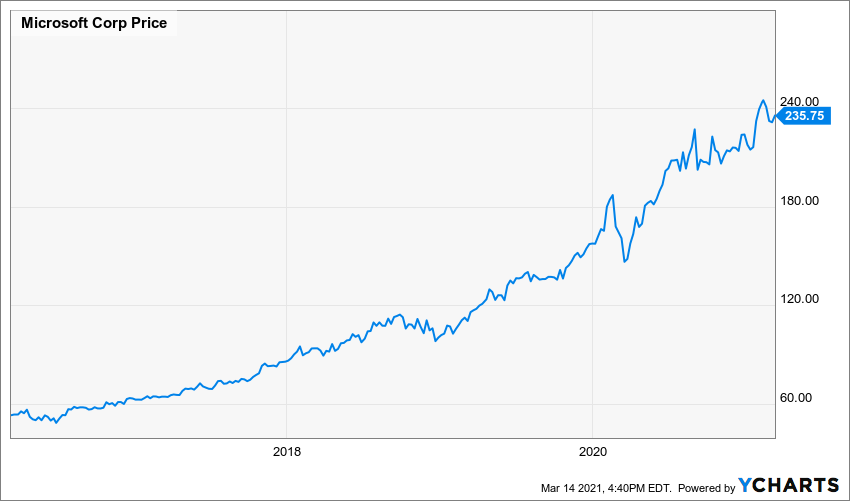 So, is it “wrong” to be so overweight on one company? I don’t know how anybody — even an “expert” — can give a definitive answer to that.

Some investors equally weight their holdings because they are uncomfortable having any one stock represent more than 5% or 10% of their portfolios; others are perfectly comfortable owning huge stakes in only a few companies.

For me, it comes down to: Investor, Know Thyself!

Each of us must know his or her own risk-tolerance levels and comfort zones, and invest accordingly.

A Wild Ride Aboard Boeing

One of Katie’s biggest gainers has been Boeing (BA), but there has been a lot of turbulence. 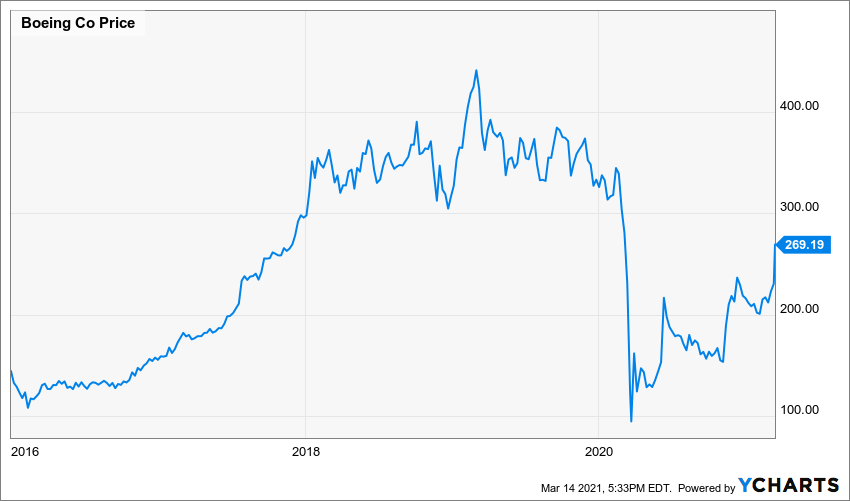 Tired of the daily drama involving the troubled 737 Max, I sold my Boeing position in June 2019 at $368/share; I mentioned that to Katie, but she is a staunch buy-and-hold investor.

After the COVID-19 pandemic struck, Boeing fell hard, going below $90. The company also eliminated its dividend.

But BA has resolved its 737 Max problems to the satisfaction of regulators, and its stock price has recovered; it was $269 at market close Friday, March 12.

So while Katie’s hands-off nature kept her from locking in a big gain, it also kept her from panicking when BA dived. The result (so far): a market-beating 168% total return for her Boeing position.

Warning: This Will Make You Jealous

Ben bought his Tesla shares before Elon Musk’s electric-vehicle company became the darling of those who wax poetic about “disruptive” stocks.

According to his brokerage statement, Ben’s cost basis on his TSLA position is $70.10 per share — giving him an eye-popping 1,189% gain.

He and Katie recently bought a 2018 Tesla Model X. Sure, it was a bit of an extravagant purchase … but hey, Ben earned the right to spend some of his TSLA riches on a car he’d been eyeing for years. (He actually didn’t sell TSLA stock to buy the car, but you get the idea.) 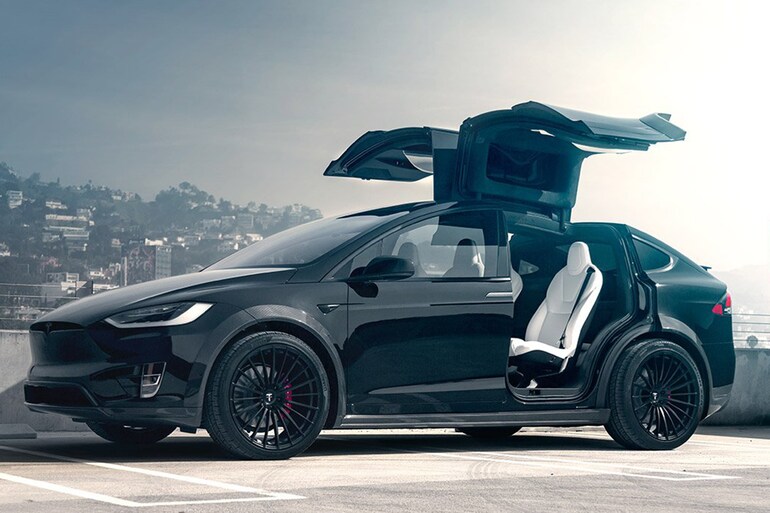 Because he was invested heavily in a few tech names, Ben wanted to broaden his portfolio with a diverse selection of mutual funds and ETFs.

Katie, meanwhile, has been accumulating low-cost Vanguard Mid-Cap Index Fund (VIMAX) through the 401(k) plan offered by her current employer.

In less than 4 years, her position in VIMAX has grown to be worth approximately as much as all of her individual stocks combined.

As investors, perhaps the single most important thing both Katie and Ben did was start early. Just a few years after graduating from college, each already had a pretty tasty portfolio cooking.

Whether the market was going up or down, Ben pumped cash into Microsoft, Katie did the same with Starbucks, and over time they branched out into other investments. 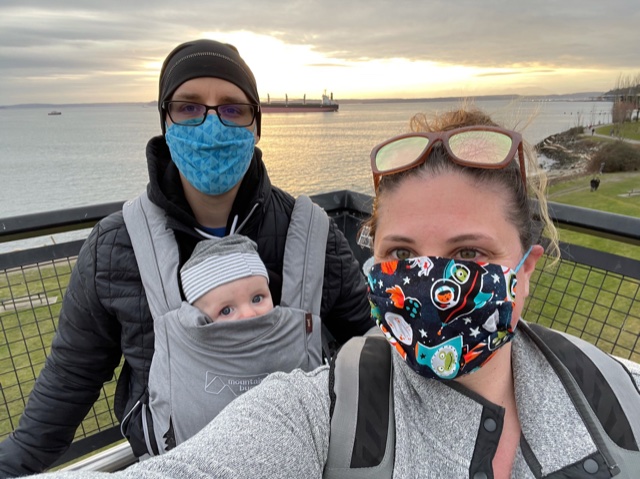 In addition to building what is now an enviable combined portfolio, doing so established habits they still practice in their mid-30s — habits they hopefully will share with adorable Owen when the time comes.

I strongly encourage people of all ages to take charge of their financial futures. Whether y’all can afford to invest $10,000 per month or only $100 — or even only $10 — the best time to start is immediately.

Coming Attraction: An article revealing my next stock pick for the Income Builder Portfolio is scheduled to be published on Saturday, March 20.