With the stock market flattish for the year and showing increasing signs of volatility, especially in the “growthier” names that have been carrying it, I wanted to add something a little less jumpy to DTA’s Income Builder Portfolio.

As is sometimes the case when I’m looking for relative calm, I am turning to utilities — a go-to sector for many Dividend Growth Investing practitioners.

The choice this time: Alliant Energy (LNT), which has an enviable long-term performance history, an outstanding dividend track record, and a promising future.

Come Monday, March 8, I will execute a purchase order for about $1,000 worth of LNT stock on behalf of Daily Trade Alert.

The IBP already includes four utilities among its 39 holdings — NextEra Energy (NEE), Pinnacle West Capital (PNW), American Electric Power (AEP), and Avista (AVA) — and I did consider simply adding to those positions, as I most recently did in September.

But then I remembered a conversation I had last month with a friend (and fellow investor), who said: “I don’t know why you’re messing around with some of those when Alliant has outperformed most of them.”

She was so convincing that I did some research … and although I do like the utes we already own, I had to admit she had a point about LNT’s performance. 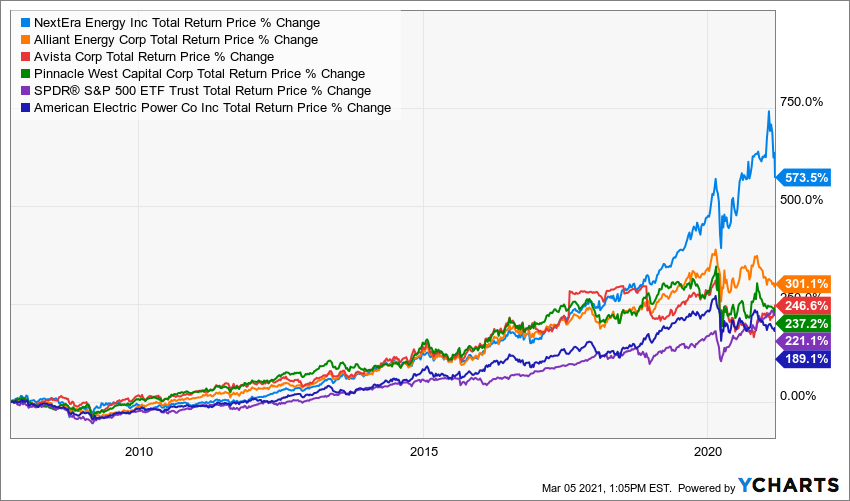 Of the four utilities currently in the IBP, only NextEra has had a better total return than Alliant since Oct. 1, 2007, just before the start of the Great Recession.

With its 301% gain, LNT — which provides electricity and natural gas for customers throughout Iowa and Wisconsin — also has beaten the S&P 500 Index handily during that span.

Interestingly, as the following graphic illustrates, LNT has outperformed those same utilities, as well as SPY, since the market bottomed on March 9, 2009. 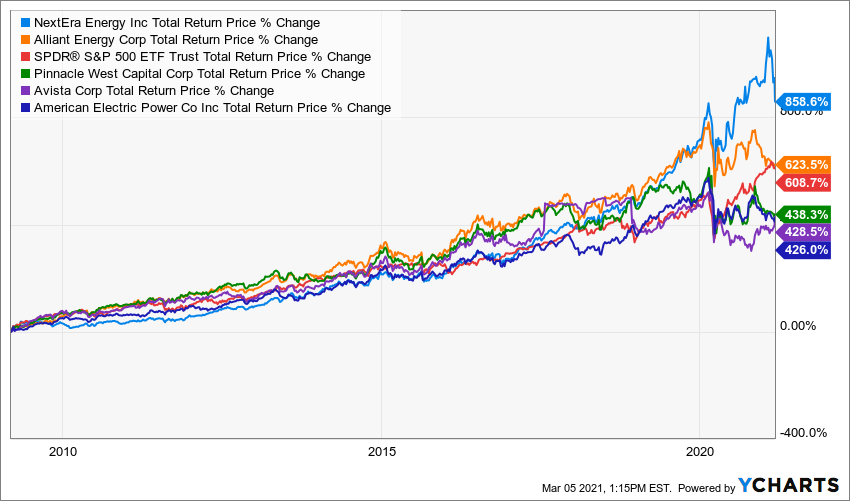 That’s right: Even in arguably the greatest bull run ever, the “boring” utility Alliant Energy has outshone the overall market.

During its Feb. 19 earnings call, the company announced it had beaten estimates for 2020 despite having faced considerable pandemic-related headwinds. EPS increased 5% year-over-year, or 7% when normalized for temperature variances.

What else is new? Steadily rising earnings are typical of LNT.

As nice as it is to see solid performance year after year after year, investing is about the future … and Alliant is forecasting similar earnings growth for 2021. 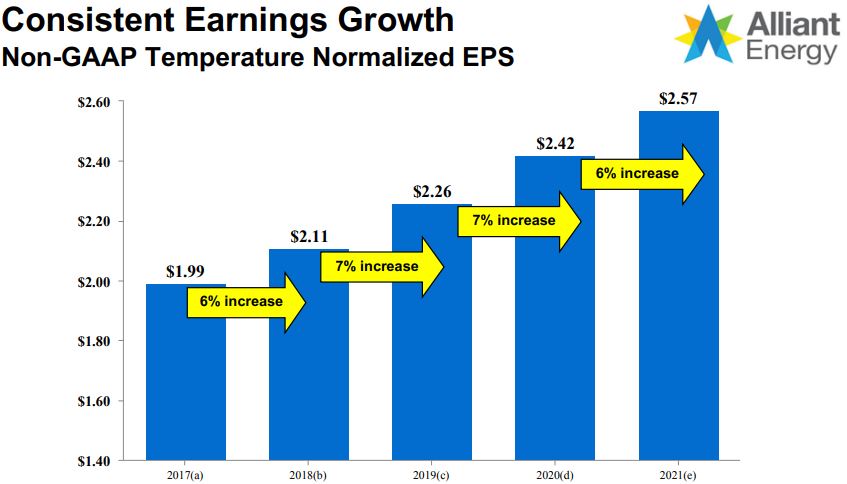 Management says it expects 5-7% annual EPS increases at least through 2025.

Maybe Not So Boring

Although I often talk about how unexciting utilities such as Alliant are, the fact is that the best of them have a lot of intriguing, impressive things going on — specifically as they focus more and more on renewable energy.

Barron’s recently published an article about how to succeed investing in “green” energy stocks; it highlighted nine attractive utilities, and LNT was one of them. (So were NEE, PNW and AEP, making the IBP a true green machine!)

Alliant says it has reduced carbon emissions by 42% over the last 15 years, and it is planning to completely stop using coal within the next two decades. 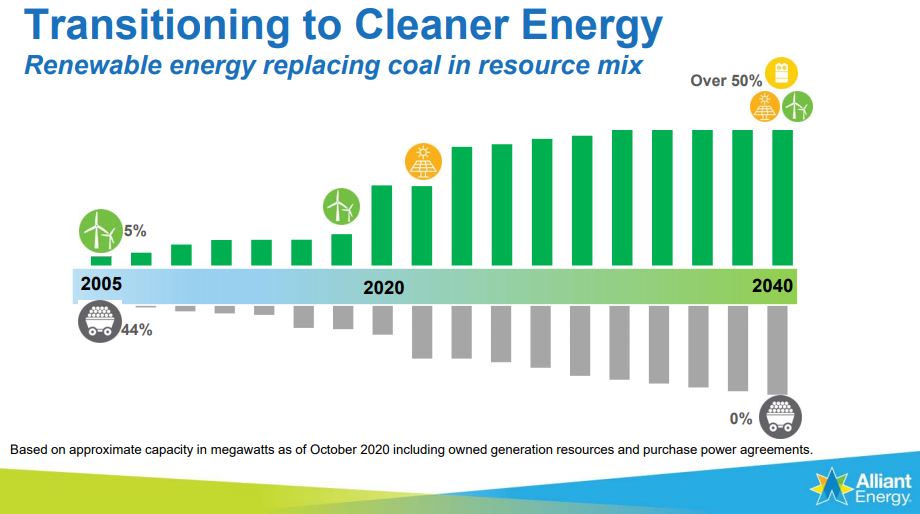 Morningstar analyst Andrew Bischof offered an interesting take on the “greening” of Alliant:

At Interstate Power and Light, the focus will turn toward additional renewable energy investment after completing the 600 megawatt Marshalltown Generating Station. In addition to the 1,300 MW of wind generation in Iowa, for which the company earns a premium return on equity, the subsidiary now aims to install 400 MW of solar generation in the state. We continue to believe Iowa offers ample renewable energy investment opportunities — both wind and solar — to support the subsidiaries’ Iowa Clean Energy Blueprint, which plans to eliminate all coal generation by 2040 and achieve net-zero carbon dioxide emissions by 2050.

When it comes to what I call “quality metrics,” LNT does well, too: an A- credit rating from Standard & Poor’s; scores of A for financial strength and 2 for safety from Value Line; Morningstar’s second-best “moat” designation; and a “safe” 65 rating from Simply Safe Dividends.

Perhaps the only thing more reliable than LNT’s rising earnings has been its growing payout to shareholders.

In January, the company announced a 5.9% dividend hike — marking its 18th consecutive year with an annual raise.

Alliant has paid dividends for more than 300 straight quarters dating back to 1946, though it should be noted that the company did halve its payout back in 2003 after earnings cratered during the infamous dot-com-bust recession.

There is so much to like about Alliant Energy: steadily rising earnings, a commitment to dividend growth, and a business plan aimed at helping today’s kids live in a cleaner world. 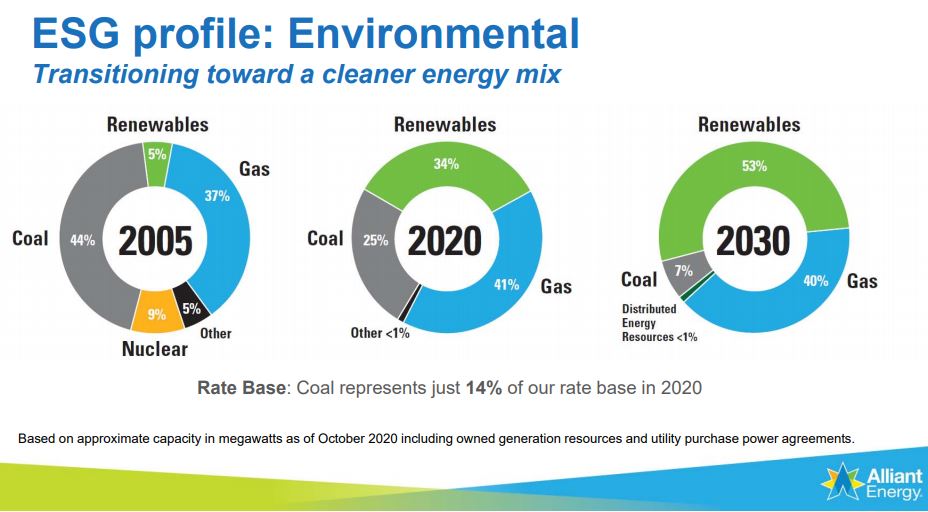 Indeed, after my friend encouraged me to take a close look at Alliant, I ended up initiating a position in my personal portfolio last week.

My post-buy article, to be published on Tuesday, March 9, will dive into Alliant’s valuation and other pertinent information.