And yet, despite all that movement, the major indexes finished February just about where they were when 2020 ended. 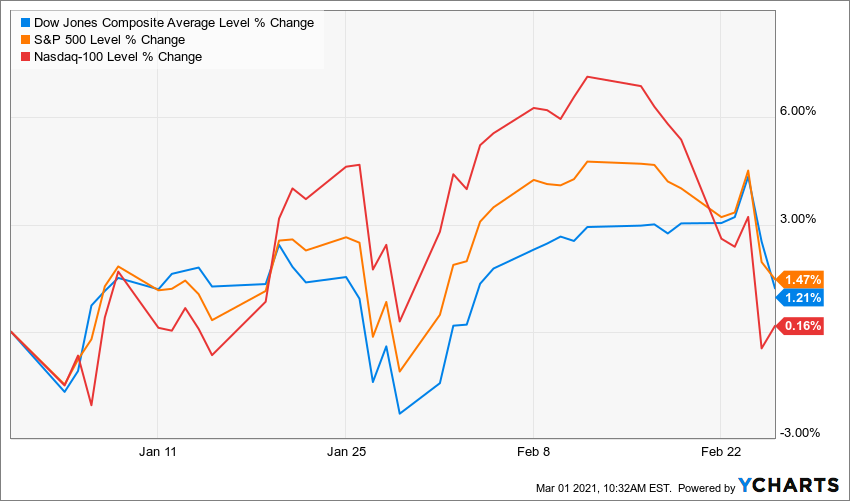 It’s been entertaining to watch — and given the market’s 2.4% rise on Monday, the first day of March, it looks like the rollercoaster ride will continue.

For traders, such volatility can be both a blessing and a curse, as they try to buy on the lows and sell on the highs. Sounds easy in theory … but if it actually were simple, we’d all be rich.

Although I do have a “fun account” in which I do a little bit of trading, I’m more of a long-term, buy-and-holdish kind of investor.

And that’s doubly true in my longest-term project: the Grand-Twins College Fund.

I launched this endeavor last June — shortly before my grandsons Logan and Jack had their first birthday party, and the plan is to invest monthly on their behalf at least until they start college.

So for 18+ years, the GTCF will see lots of inflow and, ideally, zero outflow.

No wonder “LoJack” is celebrating with a smooch! 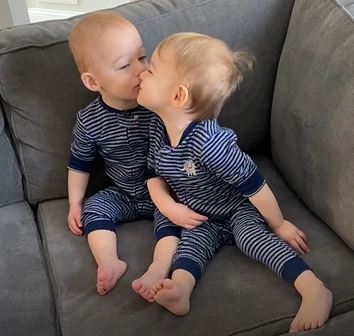 Given both the goal and the road to achieving it, I can’t worry too much about the daily ups and downs of the stock market.

Sure, if I think a stock is on sale, I might include it in that month’s purchase. But really, the buys are so small — usually between $25 and $100 — and the GTCF will be getting built over such a long time frame, that it would be silly to be overly concerned with current valuation.

After all, I’m trying to pick companies that still will be excelling about two decades from now … and there isn’t a stock-picker in the universe who knows what Company X’s valuation is going to be in 2038!

Rather than choosing any new stocks in February, I opted to add to each of four existing positions: Sempra Energy (SRE), Zoetis (ZTS), Costco (COST) and Pepsi (PEP).

I’ll talk a little more about these businesses in a minute, but first let’s catch up on how the GTCF has been doing.

In February, the portfolio had 12 companies and one ETF in which there were no new investments (other than dividend reinvestments), so I can do an apples-to-apples comparison of that baker’s dozen.

Apple (AAPL) had been going up, up and away, and in fact was the GTCF’s top monthly gainer in December.

Like many big tech names, however, February was unkind to the iconic iPhone maker. Also well down were Amazon (AMZN) and the ARK Innovation ETF (ARKK) — which had been a high-flyer for months.

Not all tech names struggled in February, however, as Mastercard (MA) and Alphabet (GOOGL) enjoyed double-digit gains.

And then there’s DraftKings (DKNG), the gambling facilitator that scored its second consecutive GTCF monthly “victory” thanks to the expansion of legal sports betting in numerous U.S. and worldwide markets.

DraftKings has huge potential, which is why I own a decent-sized position in my personal portfolio, but it is not for faint-of-heart investors. It has been the GTCF’s top monthly performer 4 times, but also its biggest monthly laggard twice since it was last bought in July.

Still, with the peaks outnumbering the valleys, DKNG has been the GTCF’s biggest winner in the portfolio’s 8-month history. 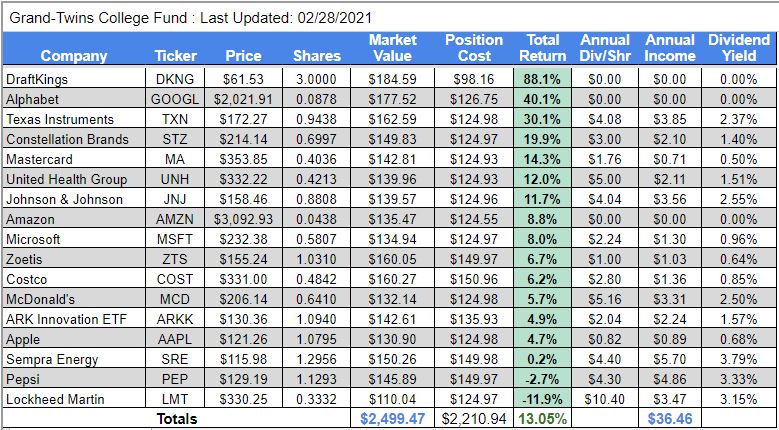 It doesn’t look like DKNG is ready to take a break just because the calendar turned to March, either.

The combination of a fine earnings report, optimistic revenue guidance, and the overall market surge pushed shares up nearly 12% on Monday — boosting the total return of the GTCF’s position to an eye-popping 110%!

The above table is available on the Grand-Twins College Fund home page — HERE — along with links to every article related to the portfolio. The table is updated throughout each market day.

I call this a “growth and income” portfolio, and the emphasis is clearly on growth. But I still appreciate a company that pays a reliable and rising dividend, and there are many of those in the GTCF.

Five components paid dividends in February, and the $2+ they generated was used to buy fractions of additional shares in each position. 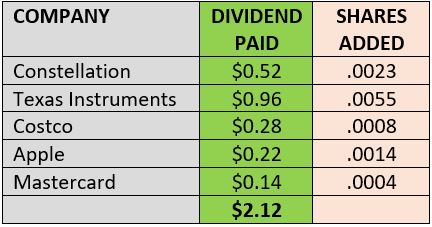 Obviously, $2.12 isn’t much, but it’s 10% more than the same 5 stocks paid into the account last quarter. A decade from now and more, we’ll be talking about real money.

It will be Pepsi’s 49th straight year of increasing dividends, while SRE will have an 11-year streak.

I like to think that all of the companies in this portfolio can be called “high quality,” but obviously there are degrees of “quality.”

The four to which I added in February scored very high in “quality metrics” — my look at how various rating sites grade stocks. In particular, look at all that green for Costco and Pepsi.

Of the four, Sempra Energy appears to be the best current value, with pretty much every analytical site calling the California-based utility a buy.

Price is at market close 2/26/21 … Forward P/E ratio is consensus as provided by Morningstar … Morningstar is that analytical site’s current “Fair Value Estimate” for each stock … The others are 12-month target prices by various analytical sites, though Zacks is 6-12 months and Value Line is the midpoint of that site’s 18-month target range.

Even though animal health-care company Zoetis and retail giant Costco appear significantly overvalued, the fact is that they just about always are expensive.

That’s why so many analysts still consider ZTS and COST “buyable” even at their current valuations.

And certainly, for a $25-at-a-time endeavor like the GTCF, I considered them to be eminently buyable.

Jack and Logan have healthy appetites — sources say, some of their food even makes its way into their mouths! 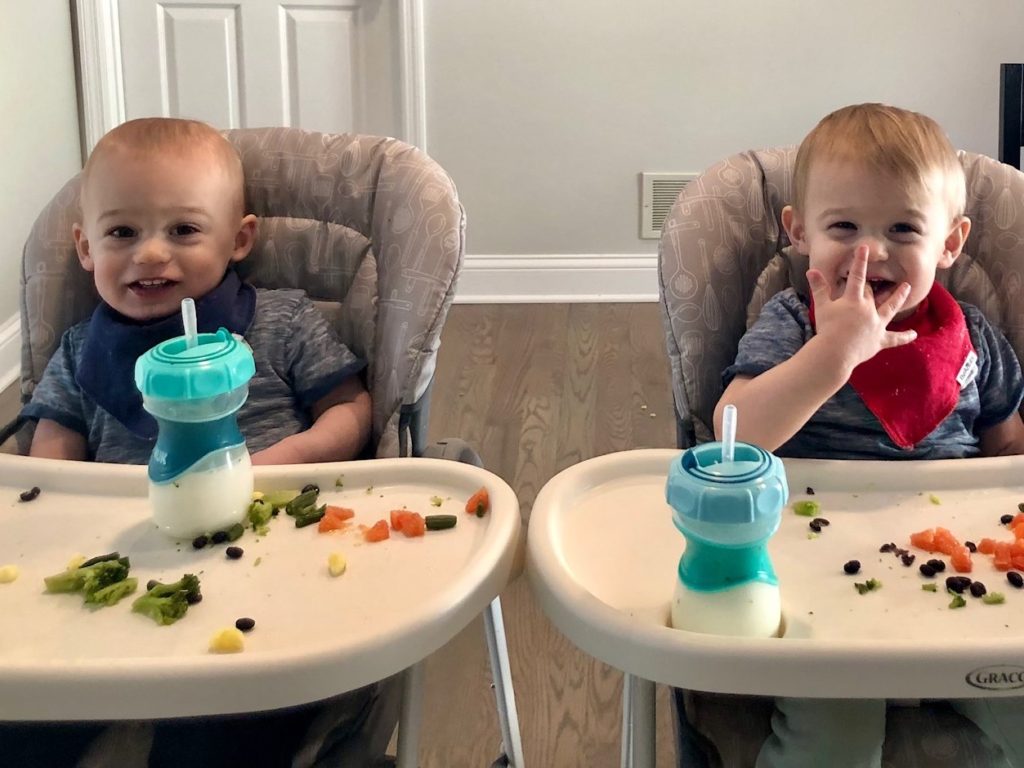 And as soon as they are old enough to understand such things, I hope they will have healthy appetites for learning about investing.

I don’t write about the Grand-Twins College Fund to persuade readers to replicate my portfolio. I do it to present what I consider interesting candidates for further research and to discuss investing concepts.

The GTCF is one of two real-money projects I do for this site, the other being the Income Builder Portfolio — see the home page HERE. My next IBP stock selection article is scheduled to be published on Saturday, March 6.

As always, I strongly recommend that investors conduct their own thorough due diligence before buying any stocks.