One of the objectives for this series, High Quality Dividend Growth Stock of the Month, is to call out some phenomenal companies that, despite their stellar quality, are overvalued at the current time.

The first stock in the series, last October’s discussion of Apple (AAPL), was such a stock: Great company, but its valuation has gone through the roof. Unfortunately, that situation is still the case. I just checked, and Apple’s stock price still looks beyond rational to me. Its current P/E ratio is more than double its own 5-year average.

This month’s pick, Microsoft (MSFT), is in pretty much the same boat. Its rich valuation means that I would not recommend its purchase at the moment for most investors.

That said, some investors, especially younger ones, may not care much about current valuations, because in 10-15 years, they won’t care what they paid for the best companies; they will just be glad that they own them.

In fact, my colleague Mike Nadel bought Microsoft for his Grand-Twins College Fund. Those kids are several decades younger than me, and they certainly don’t care how much their Grand-Dad is paying for Microsoft shares!

If you want to go back and catch up with the first four articles in this series, click this page to access all of them. The stocks covered so far, besides Apple, have been Amgen (AMGN), Bristol-Myers Squibb (BMY), and Procter & Gamble (PG).

Microsoft (MSFT) is one of the rare companies that scores a perfect 25 out of 25 points on my Quality Snapshot.

Microsoft is an “old tech” company (PC operating systems and applications) that has successfully made the transition to “new tech” (the cloud). Even as we speak, the transition continues, as the new tech side is growing much faster than the older side.

But don’t sneeze at MSFT’s old tech. It is still very important in Microsoft’s business. Statistics show that among desktops and laptops, Microsoft’s Windows platform owns well over 80% market share. Apple’s Mac OS is around 10%, and all the rest (Linux, Chrome, etc.) are in single digits.

Also don’t believe that the market for laptop devices has stagnated. The pandemic, leading to an explosion of work-from-home and remote learning, caused worldwide demand for traditional PCs to grow more than 13% in 2020. (Source) Microsoft systems and software are in the majority of those machines.

All that said, cloud solutions now comprise about 1/3 of Microsoft’s value. This cool breakdown is from Trefis, which E-Trade provides to account holders.

Just to explain the categories in the slide above:

Microsoft’s fastest-growing area is cloud, and it is witnessing a migration among its customers from traditional software and service offerings to cloud-based offerings. This is reflected in the growth of subscription models, as former “perpetual license” models dwindle.

As explained in Dividend Growth Investing Lesson 20: Quality Snapshots, I take a snapshot of a company’s quality from the following sources, which I have come to trust and respect over the years:

I grade these snapshots by awarding 0-5 points in each category. Microsoft scores five points in every category for a total of 25, giving it the highest grade possible.  There are only a handful of companies that get 25 on this simple system.

Among the notable grades, S&P awards Microsoft a triple-A (AAA) credit rating. Microsoft is one of only two companies with such a rating (Johnson & Johnson is the other). It is S&P’s highest possible rating.

Morningstar awards Microsoft a Wide moat, meaning that it has durable competitive advantages expected to last for at least 20 years. Their moat grade for MSFT is based on several factors, most prominently customer switching costs, network effects, cost advantages, and pricing power.

Here are three examples why MSFT qualifies as a Wide-moat company.

Microsoft is currently yielding 0.9%. This low yield is largely the result of MSFT’s price explosion over the past 3-5 years, which we will see in the valuation graphs later. Microsoft would now be classified as a low-yield, fast growth DG stock. 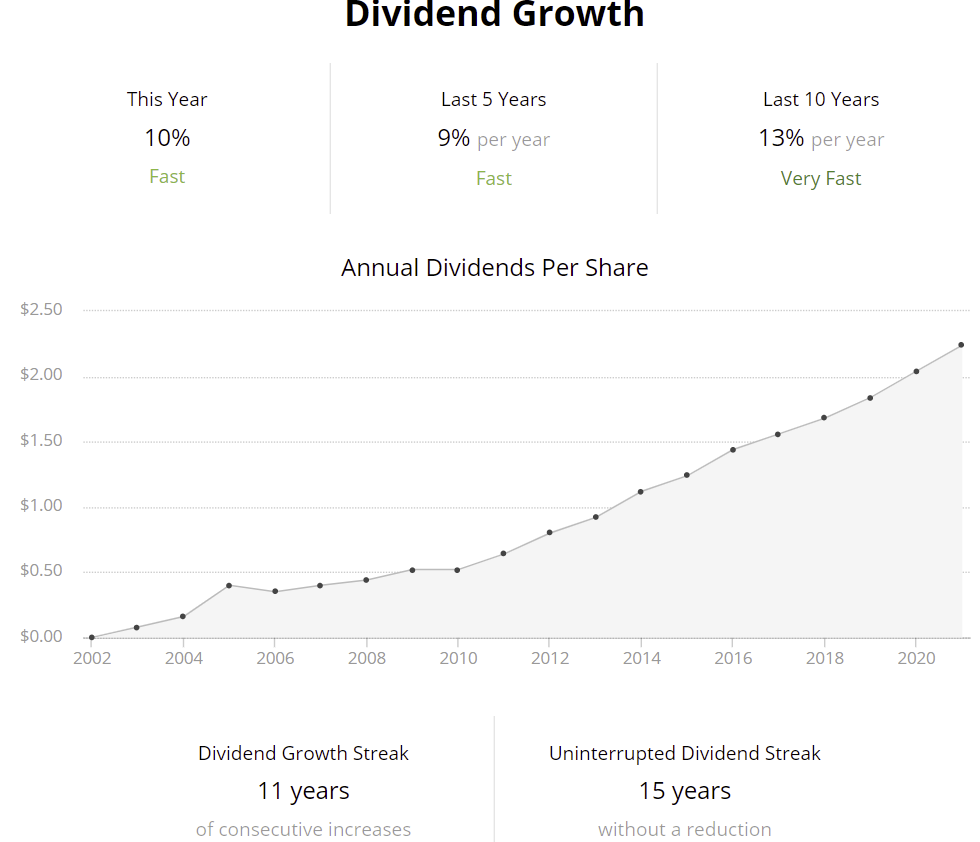 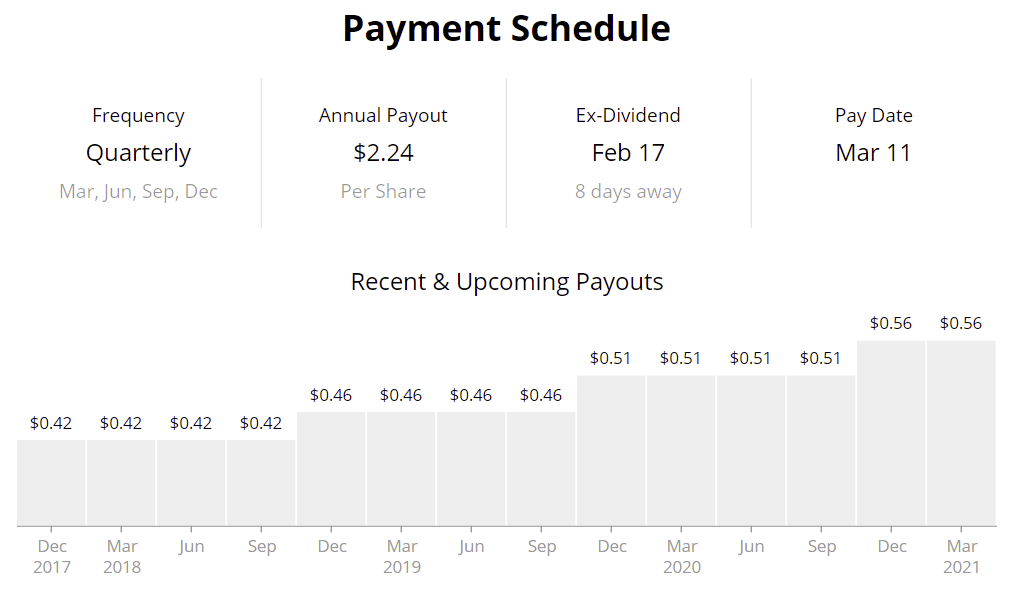 Note that MSFT’s ex-dividend date, to be on its records for the next dividend payment, is coming right up on February 17.

To value a stock, I use four valuation models, then average them. For more details, see Dividend Growth Investing Lesson 11: Valuation.

Here is the FASTGraph for MSFT using the 8-year display period. You can see the blue and orange reference lines. The black line is MFST’s actual market price. Look at how its price has shot up since mid-2016. 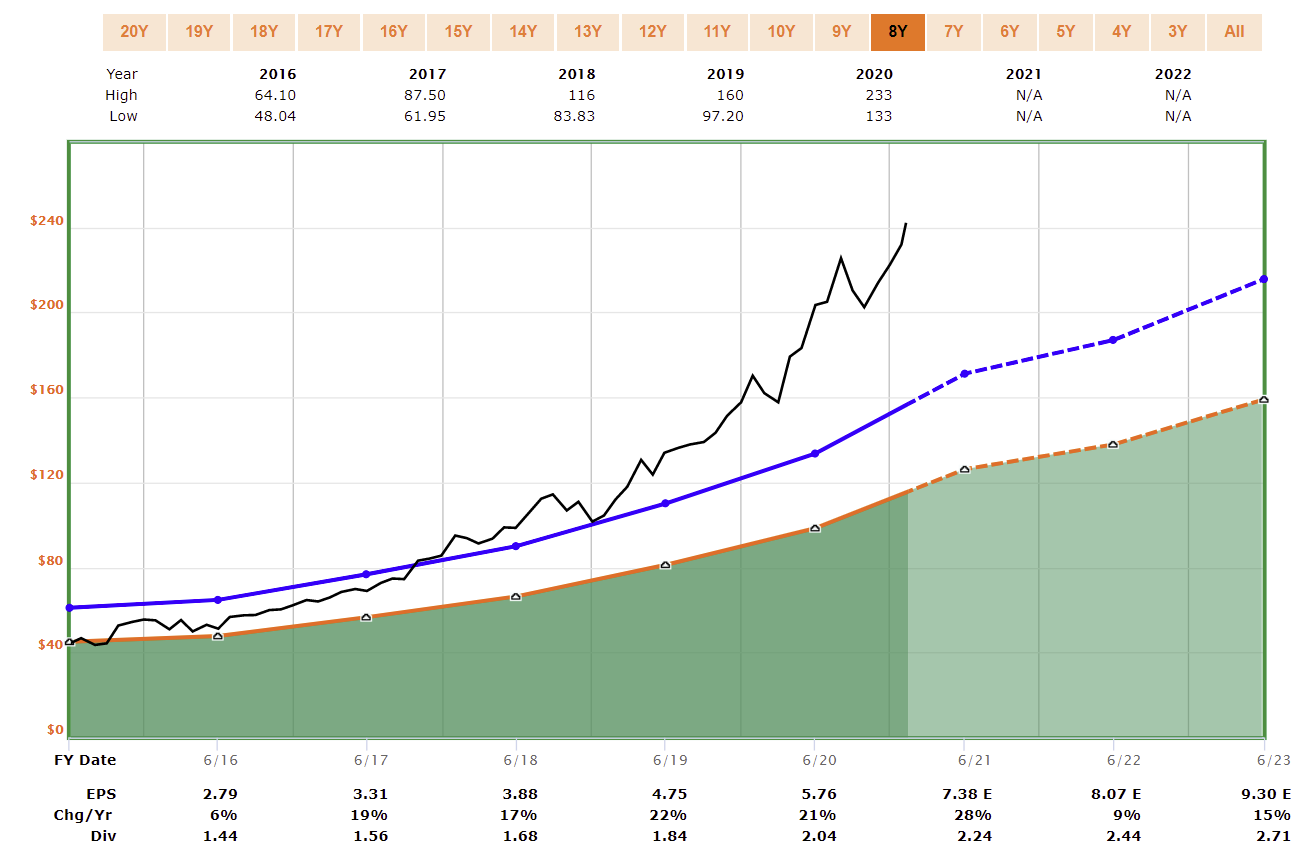 You can tell visually that MSFT is over-priced based on the elevation of its price line compared to the two fair-value reference lines.

The company’s current P/E ratio is 36. I create a valuation ratio for each model.

Morningstar takes a different approach. They ignore P/E and other valuation ratios.

Morningstar’s model produces quite a different result from the first two models. The DCF model suggests that MSFT is undervalued, with a valuation ratio (circled) of 0.92.

I would normally call a valuation ratio in the band between 0.90 – 1.10 “fairly valued,” but Morningstar has given a 4-star rating to MSFT, which indicates “undervalued” in their world. In my own summary below, I will stick with my own terminology.

At any rate, Morningstar does not see MSFT as vastly overvalued at all.

If a stock is yielding more than its historical average, that suggests that it is a better value than usual, because you are paying less for the stock’s dividends. And vice-versa.

We can see the yield comparison on this graph from Simply Safe Dividends. Note how the yield has plunged as MSFT’s price flew upward. Mathematically, price and yield are inversely related. 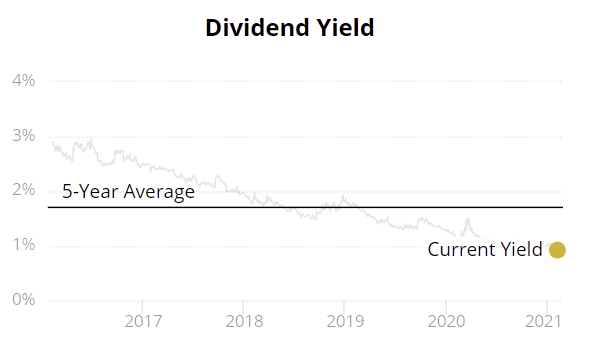 Just as with the earlier models, we make a valuation ratio. MSFT’s current yield is 0.9% and its 5-year historical average is 1.7%.

I cap this valuation ratio at 1.20, because I think that this comparative-yield model is the least-direct way of assessing valuation.

The models are widely spread-out in their assessments of Microsoft’s true value.

Model #1 is well out of line with the others in its magnitude. Model #1 is the one that is most often a far outlier from the other models. When it is, I often cap it just as I did with Model #4, at 1.20.

Those two adjustments in the raw numbers lead to this result:

In the aggregate, the assessment is that MSFT is very overvalued, with a valuation rato of 1.22. Using that ratio, it is easy to calculate a fair price:

Because valuation is not a physical measurement, all valuations are estimates. Therefore, it is logical to think in ranges rather than exact values. I usually regard any price within +/- 10% of my calculated fair price to be “fair.”

With MSFT currently around $242, I think that now is not the time to buy MSFT shares. Despite its very high quality, MSFT’s stock is overpriced. That is another way of saying that, with money to invest, I would put it elsewhere now, and wait to buy MSFT at some other time.

Given its high quality, I would be willing to pay up to the top of its fair-value range ($218 per share). If you have MSFT on a watch list, that would require a 10% price drop from current levels to fall into fair-value territory.

For me, Microsoft is selling at too high a price (and too low a yield) to buy at the moment. It is an extremely high-quality company with a completely reliable dividend, but I would wait for a better entry price.

I own Microsoft in my Dividend Growth Portfolio. I bought it in 2014 and 2015, when its price and valuation were much lower, and its yield much higher, than they are now. When I bought it, it was as a dividen- growth stock yielding 2.7%+. I had no inkling of the meteoric price increases to follow.

Last month, I trimmed some MSFT shares, because the rapid price increase had caused it to occupy too large a position in my portfolio. You can read about my thought process in the first article linked below.

For further reading about MSFT, see these articles:

I Just Sold Some JNJ and MSFT and Bought These 3 Stocks (Dave Van Knapp, January 2021)

I Bought Microsoft (MSFT) and 6 Other Stocks for My Grand-Twins College Fund (Mike Nadel, September, 2020)

This article is not a recommendation to buy, sell, hold, trim, or add to MSFT. As always, perform your own due diligence. Check the company’s complete dividend record, business model, financial situation, and prospects for the future. Also consider your tolerance for risk and how well the company fits (or does not fit) your long-term investing goals. 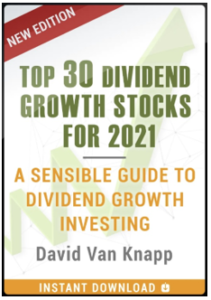 One customer has said:

I downloaded your eBook last night. I was blown away by how much thought and care you put into this. People are going to love it! The first half of the book contains so much timeless wisdom and information on the strategy. You have a real gift for explaining complex topics in terms that anyone can understand.

Even if you decide not to purchase the book, be sure to sign up for my free monthly newsletter. I use it to convey an educational tidbit or useful tip about DG investing every month. There is no obligation attached.