When a company carries out a stock split, nothing changes about its fundamentals, its valuation, its dividend — or, these days, even its “buy-ability.”

For example, shares of Sherwin-Williams (SHW) — which we just added to DTA’s Income Builder Portfolio — have moved about 2% higher since the world’s top paint-seller announced a 3-for-1 split on Feb. 3. 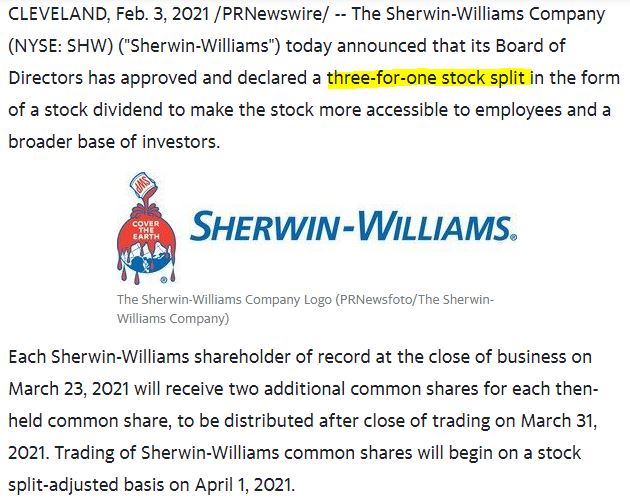 Nearly every company that does a split says it wants to make its stock “more accessible” to investors.

Indeed, the approximately $1,000 worth of purchase orders that I executed Monday, Feb. 8, on behalf of Daily Trade Alert brought 1.3793 shares of Sherwin-Williams into the IBP.

When it comes to post-split-news reaction, Sherwin-Williams’ 2% gain wasn’t even all that large.

Two other IBP components, Apple (AAPL) and NextEra Energy (NEE), announced 4-for-1 splits last summer; Apple’s price shot up by 10.5% in the next trading session, while NextEra’s moved 4.9% higher.

Investors tend to like splits … but here’s the deal: Aside from price action brought about by zealous investors, splits don’t really “matter” much.

For those whose brokerages don’t offer fractional-share buys, I suppose SHW will be somewhat more “accessible,” but there really is not much of a material advantage to this — or any — stock being split.

And Speaking Of Dividends …

As I noted in my previous article, Sherwin-Williams is a Dividend Aristocrat that has been growing its annual payout for more than four decades. 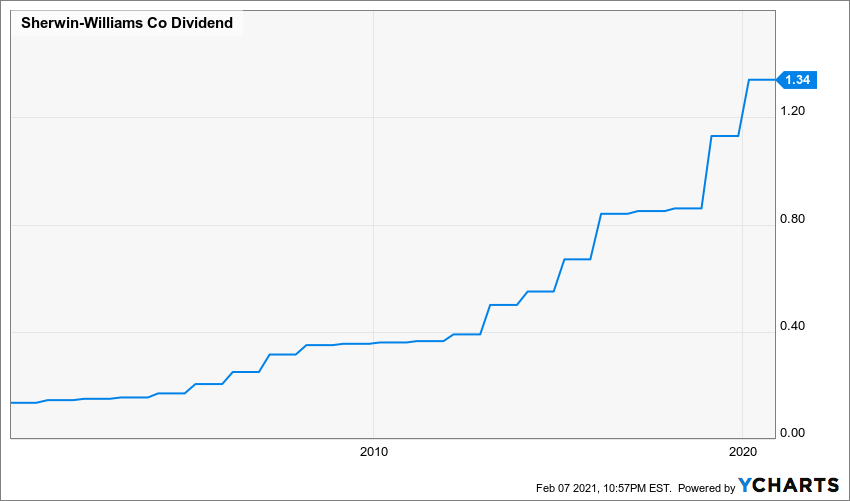 Within the next few weeks, SHW is expected to announce its next raise.

Its average increase over the last 20 years has been more than 12%; but considering the pandemic, I’ll figure on a more conservative 7.5% hike this time to $1.44.

Under that scenario, our 1.3793 shares would bring $1.99 into the Income Builder Portfolio in mid-March, and that dividend would be reinvested automatically (as per IBP rules) to buy a tiny fraction of an additional share.

Then, three months later, the split-adjusted quarterly payout of 48 cents would generate another $1.99 in income.

The following table illustrates how the next year of dividends — and the split — would affect our SHW position (assuming the aforementioned 7.5% dividend raise).

*DRIP refers to shares bought via dividend reinvestment at $725/share.

Sherwin-Williams is a low-yielder at 0.74% — joining Apple, Mastercard (MA), Visa (V) and Microsoft (MSFT) as IBP positions yielding less than 1%.

Over the next year, SHW is expected to generate dividends of about $8 for the IBP; along with Visa and Mastercard, it will be one of the portfolio’s smallest income contributors.

Still, every little bit really does increase the income stream … and it grows faster than folks might think. 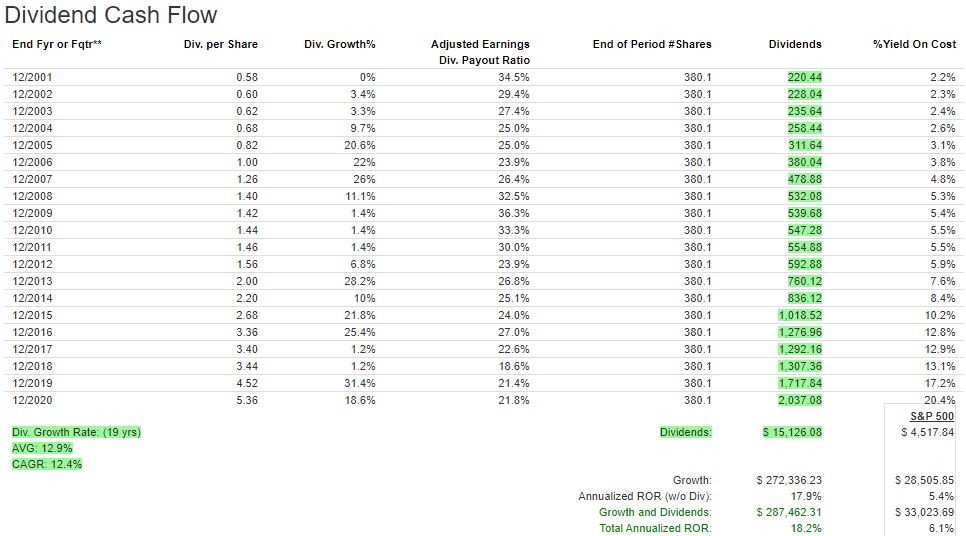 Sherwin-Williams is the Income Builder Portfolio’s first component from the Materials sector.

Here is the IBP’s sector breakdown, according to Simply Safe Dividends:

I don’t think it is necessary to have every sector represented in a Dividend Growth Investing portfolio; in fact, I do not own any Materials stocks in my personal account.

Nevertheless, part of the IBP’s mission is to educate and to offer a wide variety of candidates for investors to research, so I liked the idea of adding a high-quality Materials stock.

I also considered Air Products and Chemicals (APD), another fine company in the sector. But SHW has consistently outperformed APD — with a significant total-return edge over the past 1, 5, 10, 15, 20 and 25 years.

I also thought Sherwin-Williams had a stronger recent earnings report and better forward guidance, with fewer unanswered questions. I nonetheless could see adding the higher-yielding APD at some point.

Analysts generally are bullish on Sherwin-Williams, with 17 of the 29 surveyed by Reuters calling the stock either a Strong Buy or Buy.

Those who follow SHW at Credit Suisse were especially enthusiastic about the company after the most recent earnings presentation, forecasting price appreciation of about 20% over the next year. 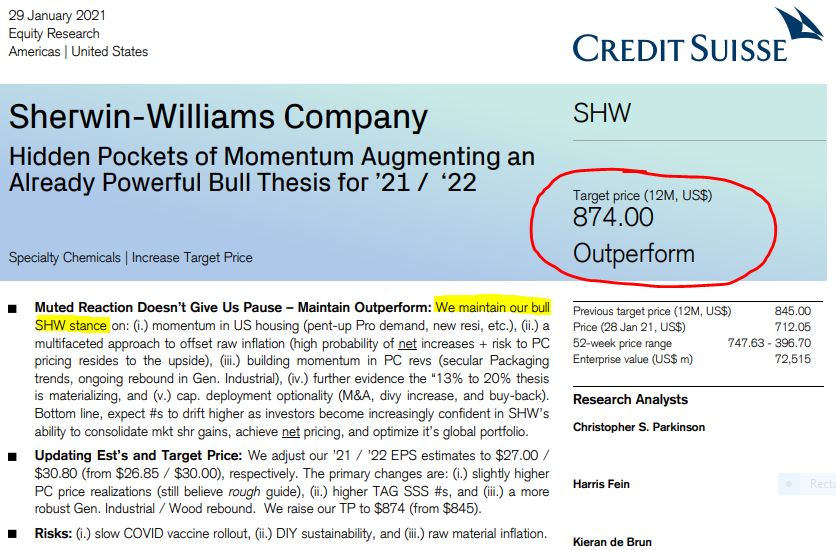 Value Line actually is more bullish about Sherwin-Williams’ prospects over the next 18 months (green-circled area in the following graphic) than it is about the next 3-5 years (red circle).

The graphic above also shows the quality of Sherwin-Williams as a company, with Value Line giving SHW its highest “safety” score and its second-highest ratings for financial strength and timeliness. 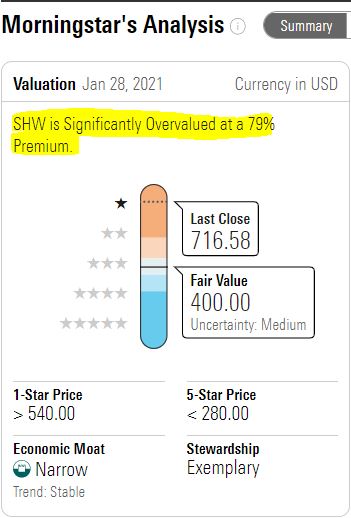 On the other hand, CFRA says SHW is reasonably priced.

The yellow highlight on the following image indicates little difference between current price and CFRA’s fair value calculation, and the red-circled area shows that many of the valuation metrics are similar to those from previous years.

FAST Graphs suggests moderate overvaluation, with a blended P/E ratio of about 29 compared to SHW’s 10-year norm of around 24. 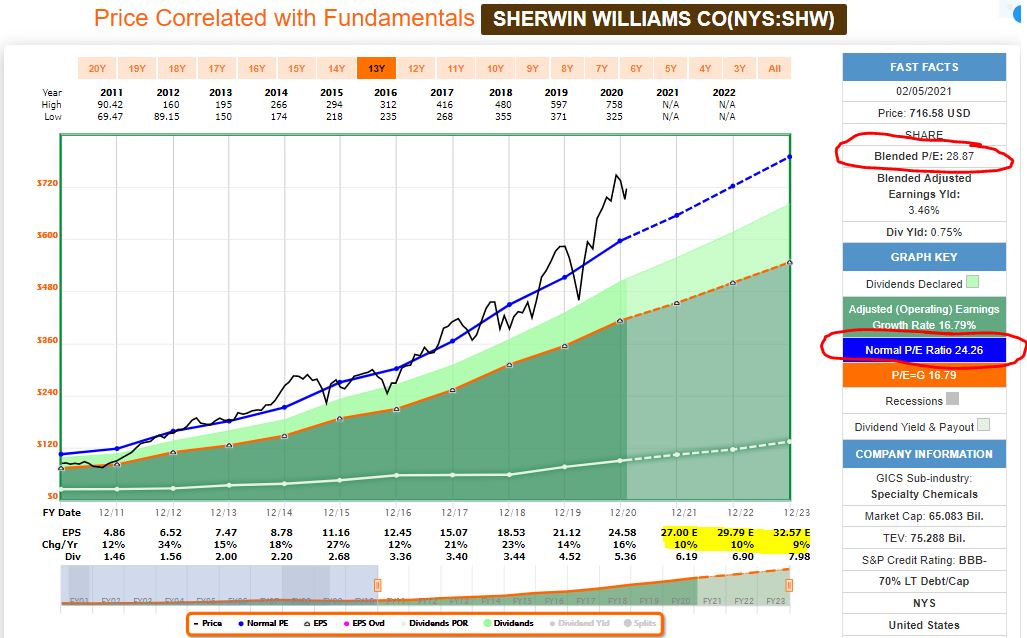 Using FAST Graphs to look at a briefer time period and employing free cash flow as a metric, however, shows a stock that is closer to fairly valued (purple-circled areas). 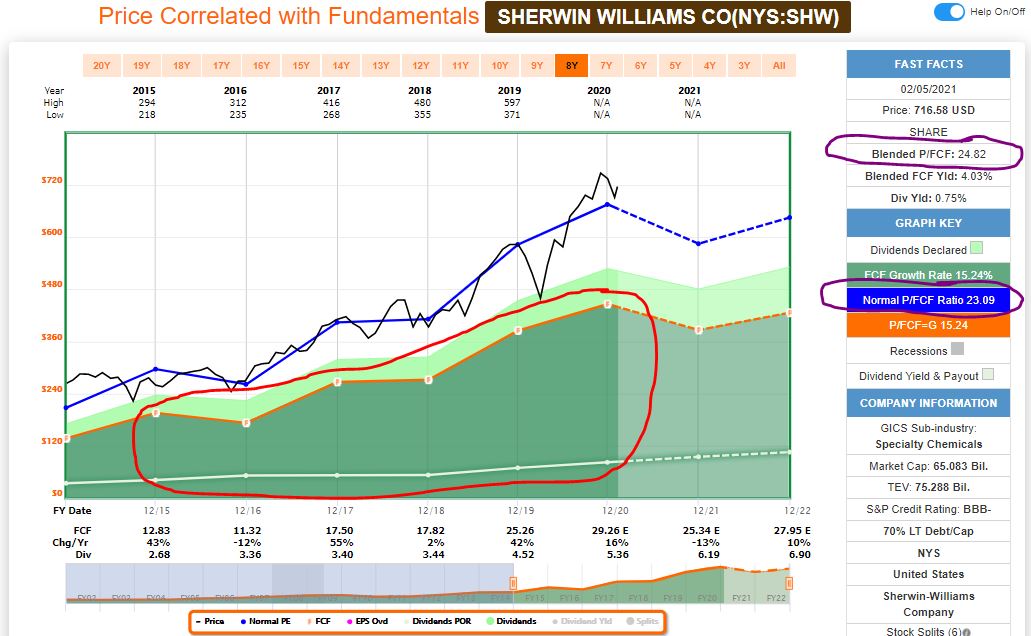 So while I won’t load it up with sub-1% yielders such as Sherwin-Williams, I happen to believe there is room in any DGI portfolio for some fast-growing, low-yielding equities.

As a company, Sherwin-Williams is fundamentally strong. And as a stock, even though it has been considered “overvalued” for years, SHW has vastly outperformed both its peers and the overall market.

Its been a winner for decades, and doesn’t everybody love a winner?

NOTE: I also manage another real-money portfolio — my “growth and income” Grand-Twins College Fund. Check it out HERE.